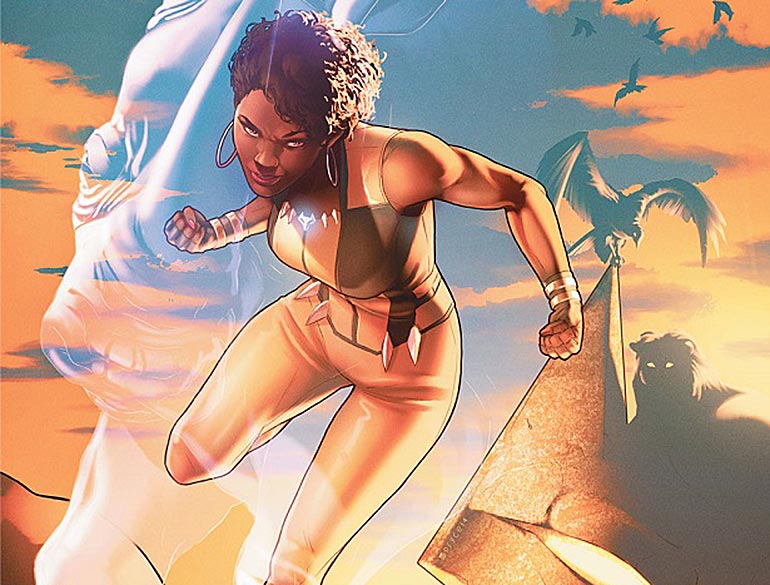 In the wake of this month’s Justice League vs. Suicide Squad event comes a brand new Justice League of America — and to get us there, DC Comics is spending the month reintroducing us to their newest members: The Atom, Vixen, The Ray, and Killer Frost. And at the center of the ongoing series and all four Rebirth specials is writer Steve Orlando, who kindly sat down for an extended two-part interview on building the new roster, how each character comes into their own, and more.

Matt Santori: Before we get into the four Rebirth specials, I want to start off with the big picture: what considerations go into building the perfect Justice League roster in your mind?

Steve Orlando: It’s a combination of things. When I came to reading JLA, it was just after the launch of Grant Morrison and Howard Porter’s classic Big 7 League — but it also right in the middle of “Rock of Ages,” after which the roster jumped up to 14 members. The team for me has always been about the icons, but at the same time, the people who deserve to be icons, who should have had a bigger platform. Characters like Steel, Aztec, and Zauriel can grow and learn from other members of the team. 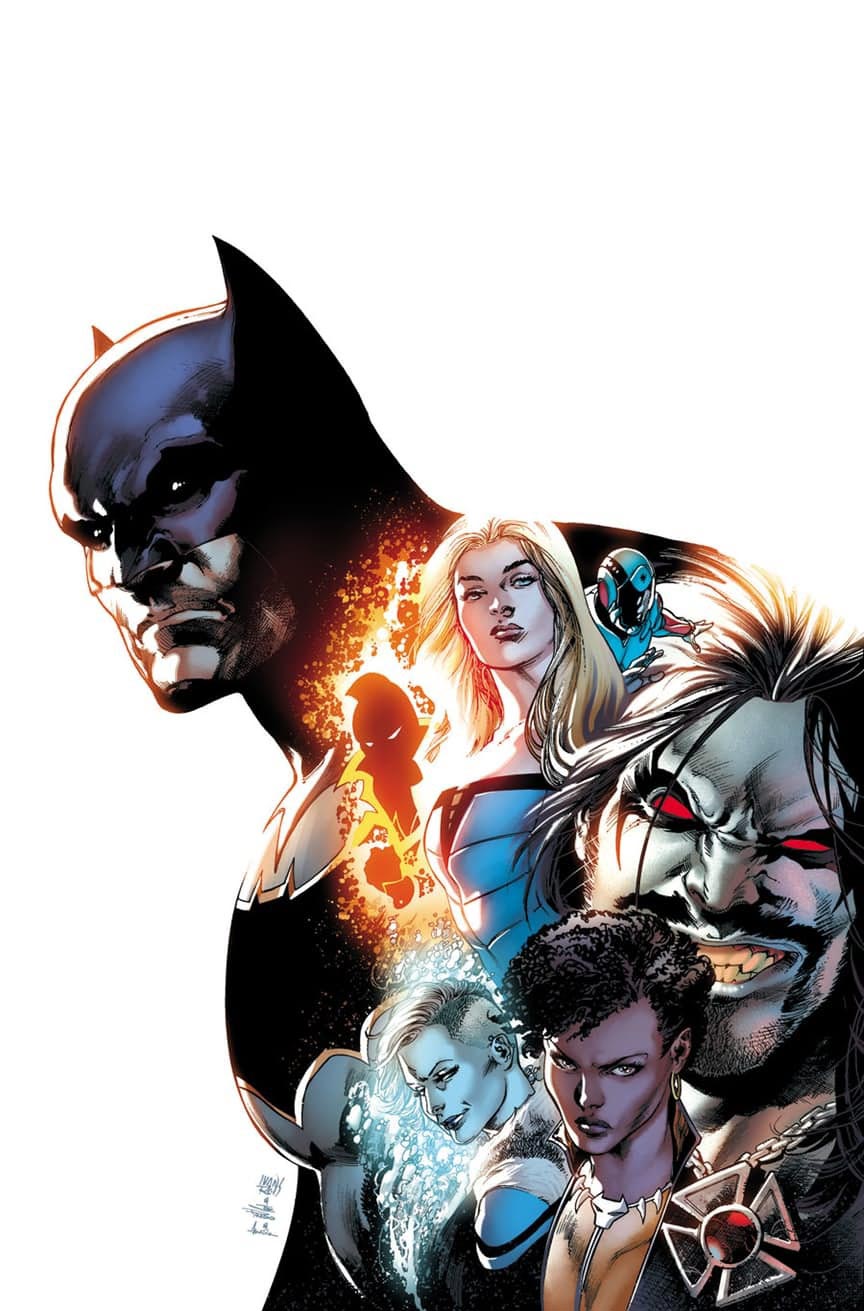 Even though it’s one team, I always think of it in terms of a generational aspect. And for Justice League of America, it’s about finding the right balance of those characters. You have someone in the DC Universe that’s known by everyone in Batman. And then you have characters who I think are every bit as strong as Batman in Vixen and Black Canary, who have a lot of history and continuity.

And then you have people who can learn from those relationships like the Ray, who are new to the scene. You have people who have been around for awhile like Ryan Choi, who’s been in the room being part of the Atom, but who is now just stepping into that role.

Ultimately, putting a JLA together is about finding people who can make each other better. Better than they can be on their own. And that goes for everyone. No character in the JLA is perfect and that’s a big part of it coming out of Justice League vs. Suicide Squad, with even Batman understanding that there are things he can’t do on his own. His way is a great way, but it’s not the only way. If they’re going to move forward as a community — which I’ve been saying from the beginning is what the JLA is about — other people need to come in and it needs mean more than what Batman can do alone. That’s why the JLA is there. 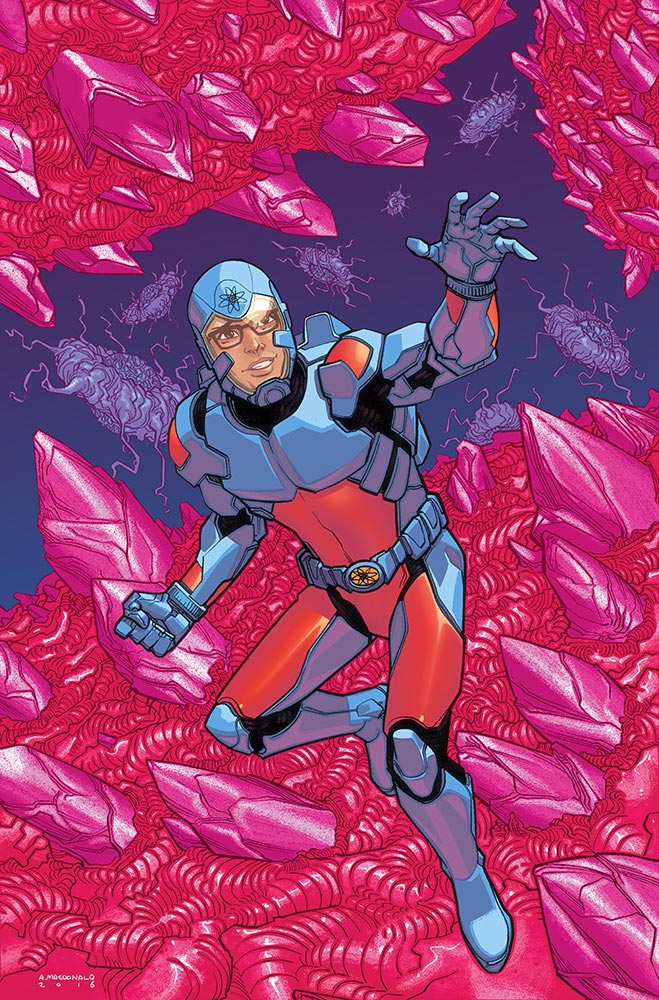 MS: Each of the four specials seems to circle around this idea of accepting a mantle. I want to walk through each character and see how that played out for you, starting with last week’s feature character — the Atom, reintroduced to us by you and artist Andy MacDonald.

SO: Ryan has a clear idea about who he is, but at the same time, he has a lot of things in his life that he feels are out of control. As the book begins, he’s putting the solutions for that upon other people, but he realizes he needs to do things for himself. And the way that plays out is by him accepting the mantle of the Atom.

And he’s not just taking it over, but he’s working as a team as well. Important in that book is the respect between him and Ray Palmer. It’s intrinsic to that book, and that teacher-student relationship is like a lot of my relationships with my own professors in college. 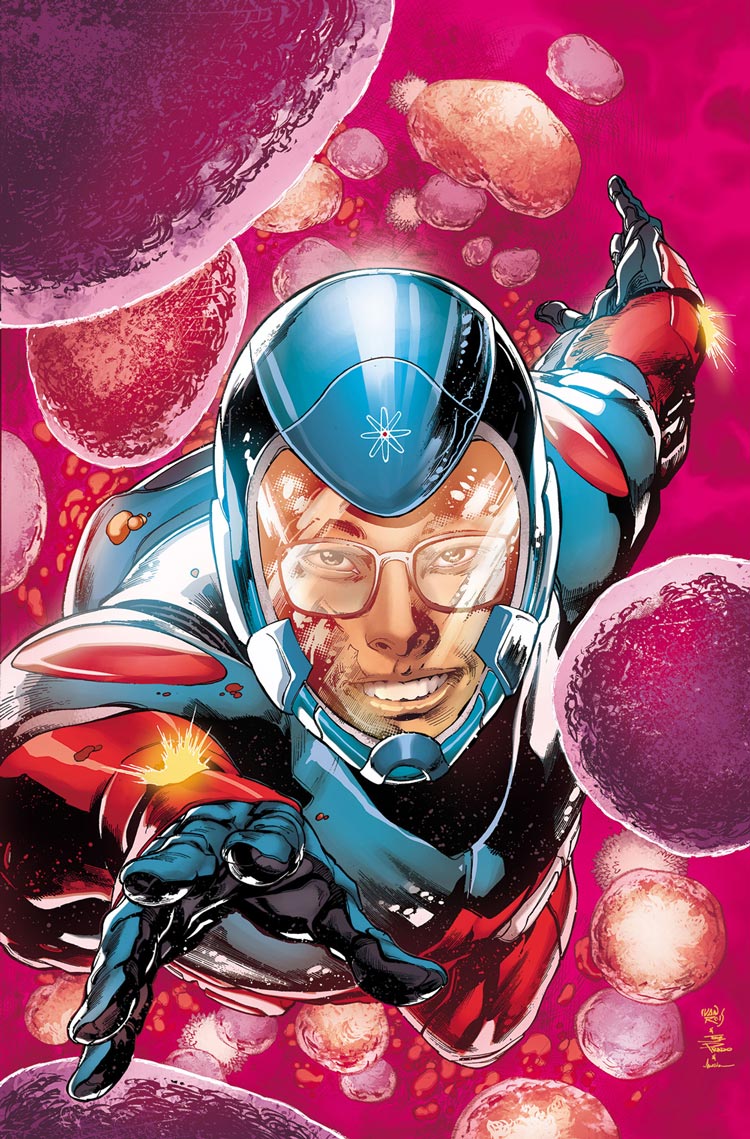 It’s about growing into a mutual respect and that emotion is kind of a microcosm of your maturing as a person. You start as a student and you come to be a mutually respected adult. We’re writing that large for the super-hero canvas now, but it’s important.

People need to feel not talked down to. And what I hope is obvious throughout the book is that the Atom is not just about these crazy adventures, but about mastering himself.

MS: You’re also reintroducing a lot of the Atom’s history in this quick burst. We have Adam Cray show up as Ryan Choi’s college roommate, for instance.

SO: What I want for JLA, Ryan, and all these characters in Rebirth is the hope that we can recreate a world. For longtime readers, we’re putting Adam Cray in — maybe you do know who he was before Rebirth and before the New 52, and are excited to see him pop up. But also, if you are a new reader, we want to do it in a way so you know who these characters are just based on this one appearance as well, and don’t feel excluded. 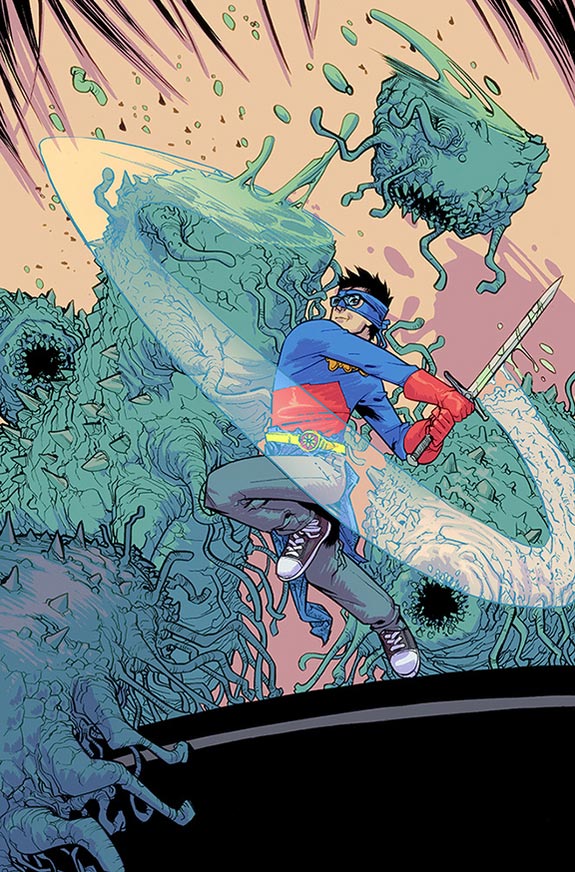 That was the experience for me. Truly, comics can be intimidating for new readers, especially books that have all kinds of new characters like JLA and a long running history. My goal, though, is that people feel like I did. I picked up Part 2 of “Rock of Ages” when I started reading JLA, and it wasn’t written to keep me out of the world. There were things that I didn’t understand at first, but it was welcoming in a way that made me want to find out more. It wasn’t written above me.

So, that’s the goal with all of these things, like putting in Adam Cray, or other small little details. I hope it gives people the hunger to find out more and keep reading, and not that it makes them feel like it’s not for them.

But yeah, I think that to me is what we do in creating a brand new canon. I hope we can always build on what’s come before, and present it in a way that’s accepting and exciting, and not intimidating. 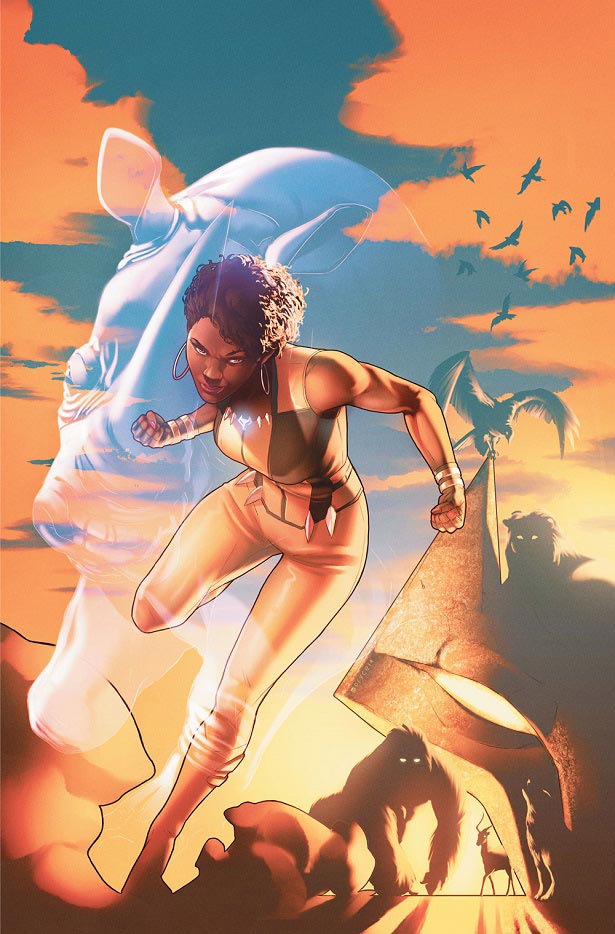 MS: Moving into the Vixen special arriving in stores tomorrow, you giving us the character’s origin from scratch more or less. Can you talk a little about that process?

SO: I think that like much of the Rebirth stuff, we’re not overwriting what happened. She definitely appeared in Justice League International for example, at least in my mind. All of her appearances happened.

With Vixen, it’s about positioning her in a way that brings light to her struggle as a character in the DC Universe. Someone who deserves respect and is fighting for it on a daily basis.

Any type of minority or underrepresented group fights in a way that’s different than those in the majority. You have to be twice as good, perhaps. I think that’s something that we feel for Vixen in her fight. In a lot of ways, she faces what people like Colin Kapernick or Beyonce face.

That’s a lot of what Vixen goes through. In the DC Universe, she’s one of the most famous fashion and cultural icons in the world, and I’m sure there’s a lot of people who would rather see her just do that than go out there and be Vixen. But the fact is, this is what’s important to her and what’s true to her.

That’s what I hope to get across. That in spite of everything that she’s faced and fought for — and I have immense respect for the character — she’s more blessed than a lot of people. She means so much to the people of the DC Universe, but on top of everything else, this is just something she needs to do, even if it’s risky. Even if other people don’t understand it, this is something she needs to do for herself. 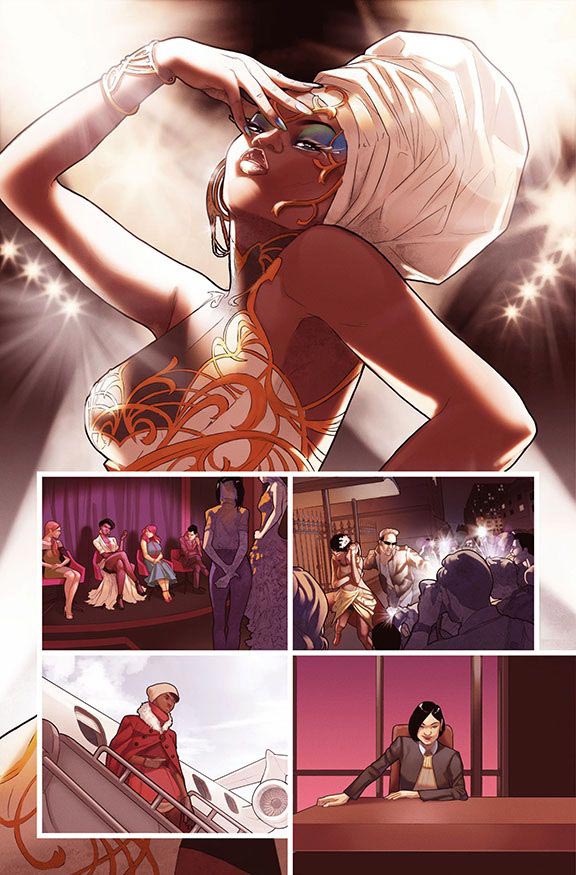 I think that’s something everyone can relate to. I think about the movie Creed. Adonis is successful before he goes into boxing. It would have been easy for him to stay in a well-paying office job. But fighting is something he needs to do. He knows that in his core, and even if no one else understands that, he has to do it.

That’s what I feel about Mari. This is something she needs to do and can’t ignore.

She is the heart of a lot of what the JLA is about. When you have this power source and are connected to the Red, you have no choice but to realize that we’re all in this together. So, in her mind, there’s no such thing as “someone else’s problem,” because we’re all part of a larger community. And we can’t ignore any of those problems.

We’re all fighting together. Not for people or above people, but with people. In that way, Vixen is one of the most important characters in the Justice League of America book. 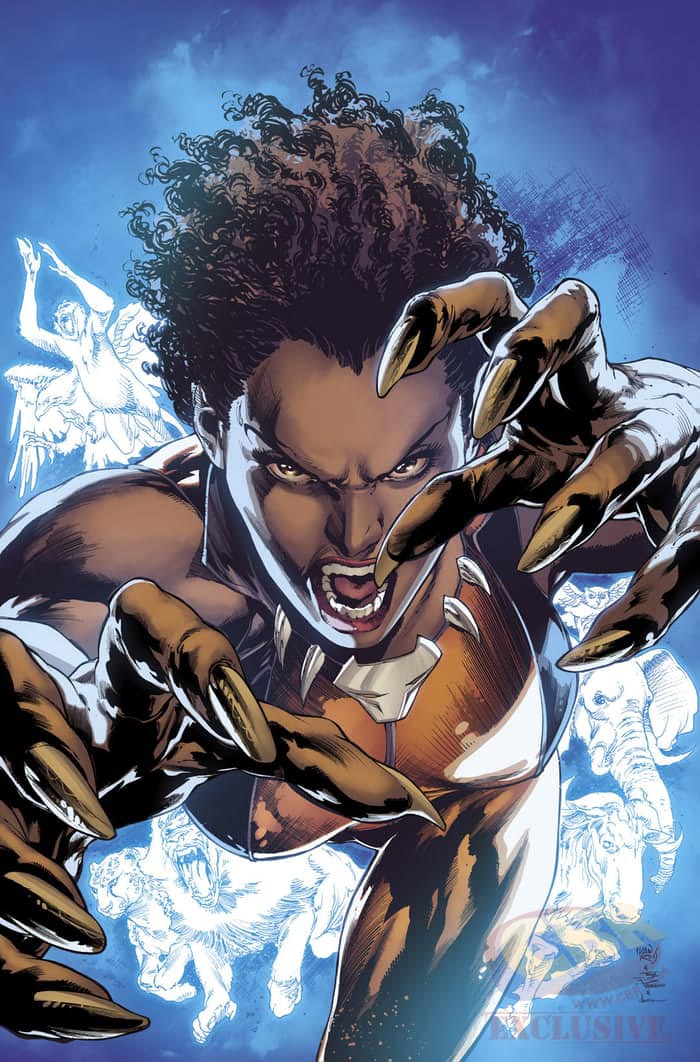 MS: And Vixen is one of two characters you’re co-writing with Jody Houser. How was that experience and what did Jody bring to the mix for you?

SO: Jody has a completely different viewpoint from me, and as you can imagine, that’s something I want for the book. I can have a spiritual idea for the character and have all kinds of cool power ideas, but I think it’s often helpful to bring in someone who’s experience is different than your own. And maybe more attuned to that character you’re writing.

That’s also why it was important to me to have an artist of color and a co-creator of color on the book with Jamal Campbell. Because even if you’re well intentioned, maybe there are things you miss or things you don’t see just because of your own natural blindspot as a creator.

Because the biggest thing with any of these books is not for myself, but it’s about delivering what people deserve and do it in the best way possible.

Tomorrow brings JLA Rebirth: Vixen, co-written by Jody Houser, to comic shops. Come back Thursday to hear all about Steve’s take on the other two new members of the Justice League: The Ray and Killer Frost.