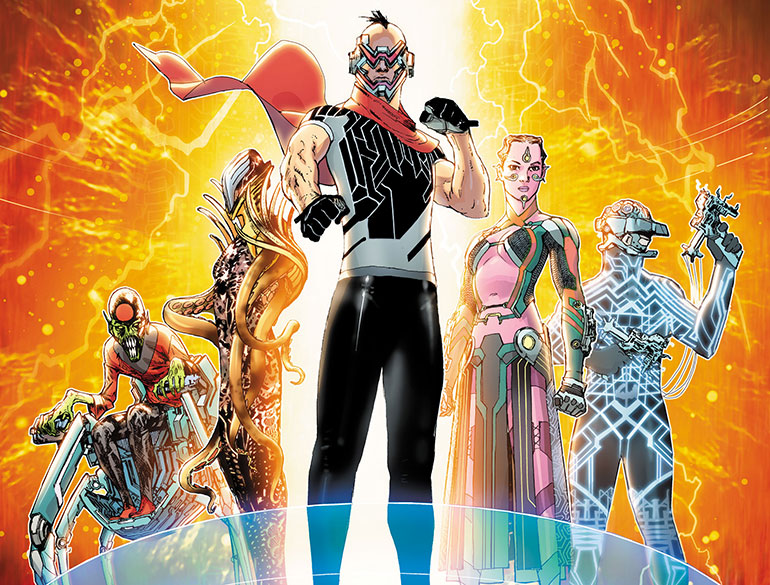 The future is literally now.

The DC Universe’s future, that is. With tomorrow’s arrival of Electric Warriors #1 from writer Steve Orlando and artists Travel Foreman and Hi-Fi, the future of the DC Universe restarts from the seeds of Jack Kirby’s Great Disaster. Here to share his thoughts on the impending adventure, Orlando brings us up to speed on the central characters, how Kirby’s vision comes to play, and what artist Travel Foreman is doing to realize it visually on the four-color page.

Matt Santori: Steve, thanks for your time and attention, and congrats on Electric Warriors! Going into the series, there’s a whole lot of world-building being done, drawing on DC Universe past and future. What kind of process did you go through to start devising the world of 2735 AD?

Steve Orlando: For me, it was all about building a fertile ground, or rather, a fertile soil. With the entire history of the DCU at our back – not just Kirby’s content, but the wealth of DCU Ideas as a whole – the question became how to unthread and rethread what people knew and expected in an intriguing, mysterious, and exciting way.

But I said soil, and that’s really what I mean, because while I noted as much as I could about the world, our leads, their planets, where they fight and what drives them to fight, it was all true just a seeded ground for Travel to germinate and grow the visuals of the book out of. 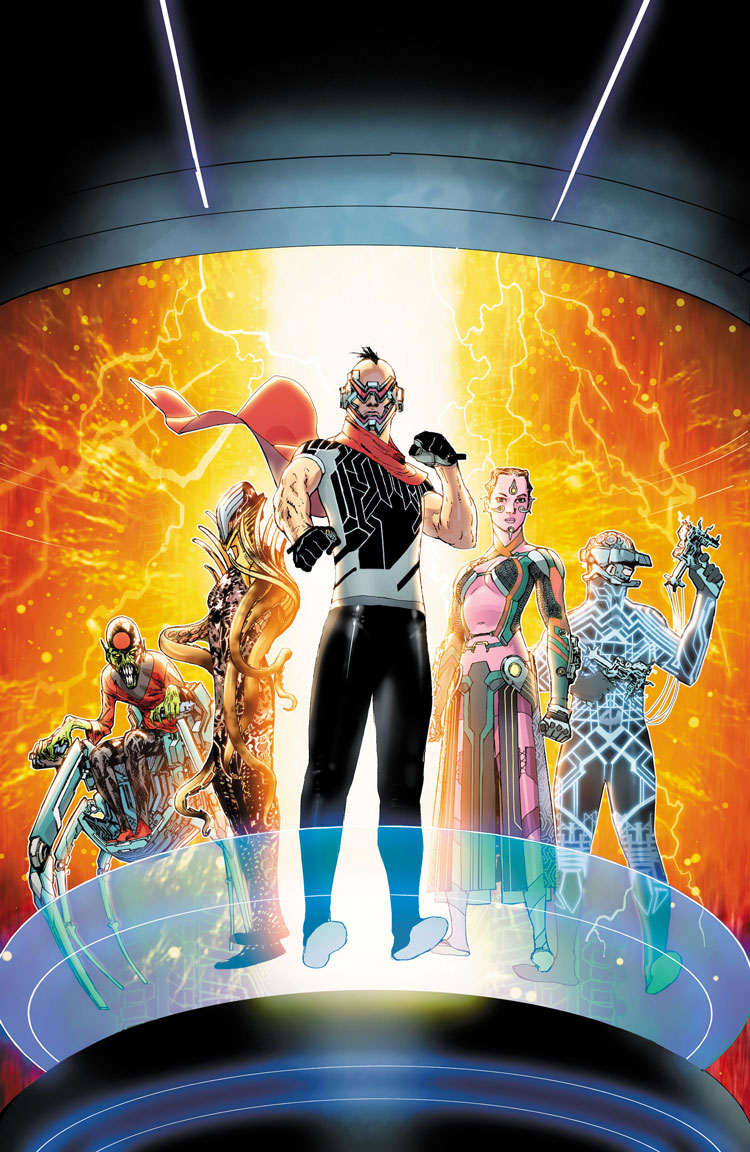 We wanted wholly new growth, perhaps recognizable trappings, iconography that rhymes with the past and the future of the Legion of Super-Heroes, but that is also whole new and welcoming to readers of this under-explored time period.

In short, anything was on the table to be broken down to its parts and reassembled in new, attractive, adventurous ways.

MS: This isn’t your first foray into the future, having worked on the Kamandi Challenge for Jack Kirby’s 100th birthday last year, but I’m curious about the inspiration you’re taking from the King, and how that influences you specifically for Electric Warriors.

SO: To me, the best inspiration you can take, and the best tribute you can make to the King, is to be as creative and bold as possible. King was producing multiple books a month, just working off page after page of raw creativity with no time to second guess or judge. That pure joy of comics, the fun of titanic cosmic battles with new idea after new idea, to me that’s the goal with Electric Warriors as it was with the Kamandi Challenge and any book that aspires to what King was able to produce. 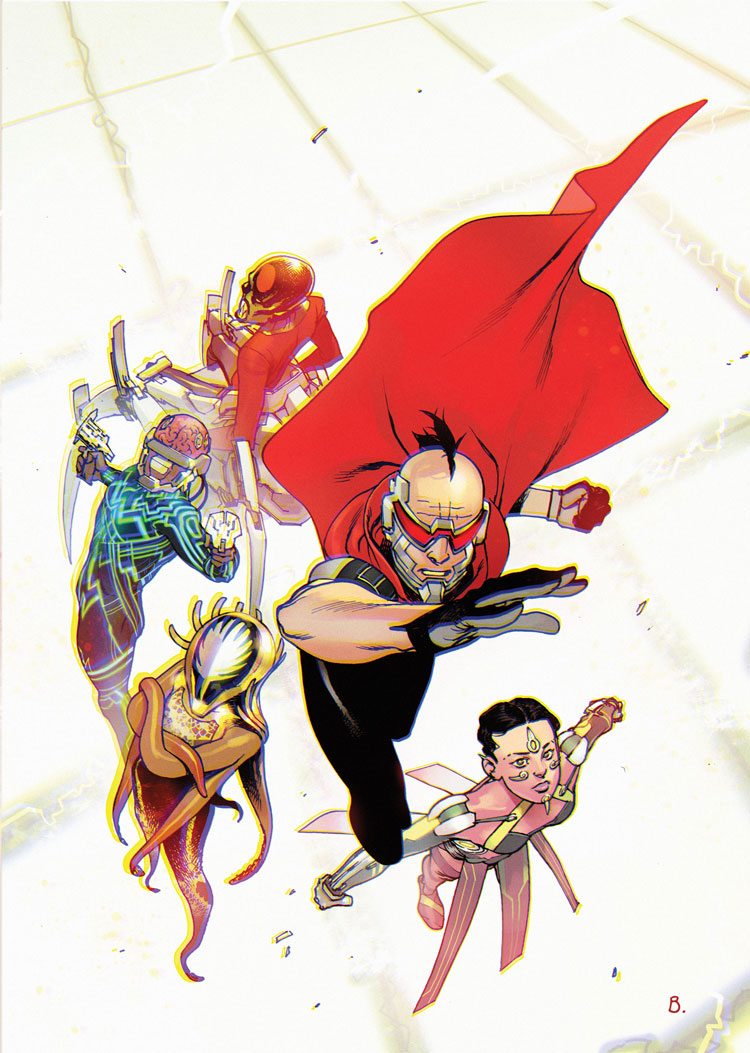 MS: The obvious jumping off point for some of what we’re seeing already in issue #1 is Kamandi’s world and the Great Disaster, but we’re being given a glimpse of the wider perspective of the United Planets on what transpired upon terra firma. Tell me how you envision the environment of Earth in the broader universe, given the disaster they inflicted upon themselves.

SO: Earth is a backwater at this point. The Great Disaster laid us low, and we fell off the intergalactic stage. We were at a new low, in need of a few centuries of self-care and self-reflection. We were divided, humans reduced to a work force for the rising and intelligence tribes of Animals.

At the start of Electric Warriors, the Human Personhood Accords have been signed, which closed the Wild Human Reserve and set up most of humanity living on the Feathered Coast (the West Coast of the former North American landmass). But as in real life, signing a piece of paper doesn’t undo a history of oppression. Tensions are high – it’s why we are the first planet in history to SPLIT our Electric Seed between two Electric Warriors, one representing humans and one animals.

But we’re on the path to unity, slow and unsteady. And in the eyes of the universe, we’re a planet try to pull its way back from the brink. Joining the Great Compromise, sending forth Electric Warriors, is one of our first steps back into Intergalactic Civilization. 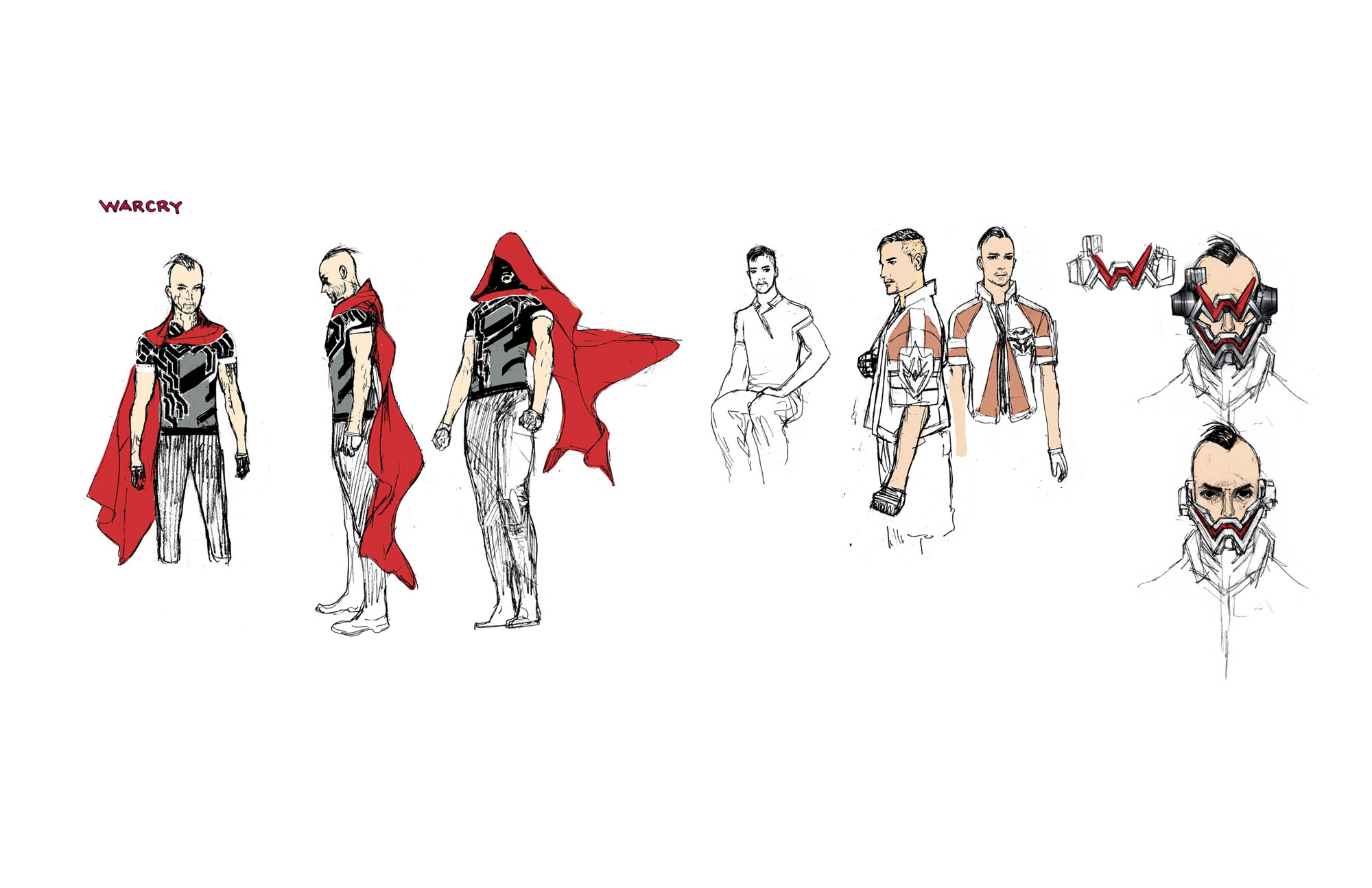 MS: In the first issue, Ian Navarro has a distinct point of view on the role of the super-hero in Earth’s history. Are we seeing a future that reveres super-heroes of the past — as the Legion of Super-Heroes once reflected — or a more jaded perspective on the past?

With Ian, he is looking for someone to blame for an anger that, in fact, he’s sort of appropriated from his mother’s generation. He is jaded, but he’s only one of many points of view, and with the galaxy in one of its darker phases, he might not – at the moment – be wrong about how he sees things.

Or at least…his point of view might end up helping him do some good. 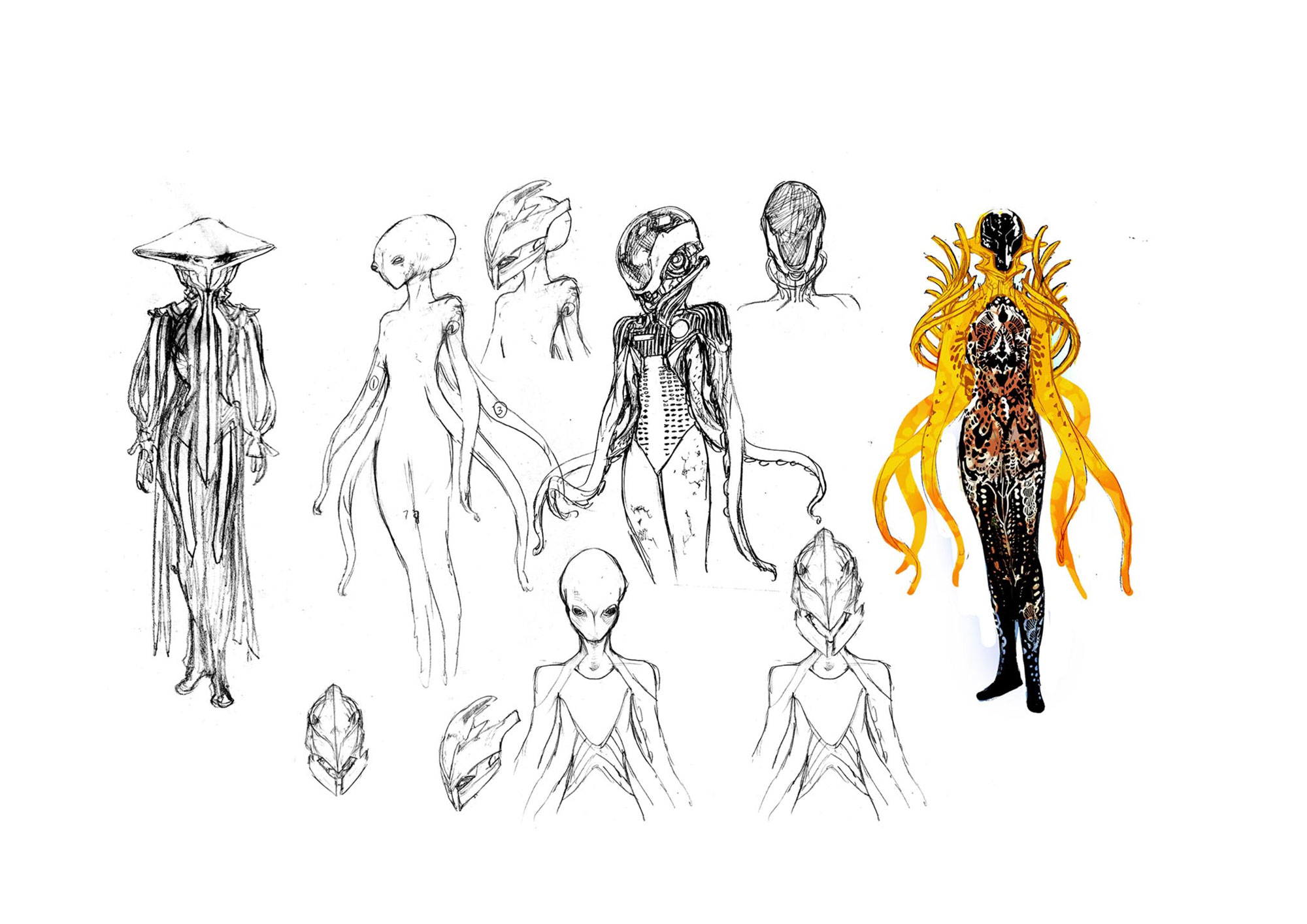 MS: What specifically went into the character make-up and designs for War Cry, Serene, Deep Dweller, and Inceptor?

SO: I trust my collaborators highly – I think leaving more room for them to innovate creates a better and more organic comic, one better and stronger than the sum of its parts. So in planning these characters I gave broad strokes about their powers, personalities, and the cultures they came from. The roughest of rough sketches in text, but enough to let Travel jump in and begin to chop away at that granite block and create the final vision of each character as something surprising and fresh. 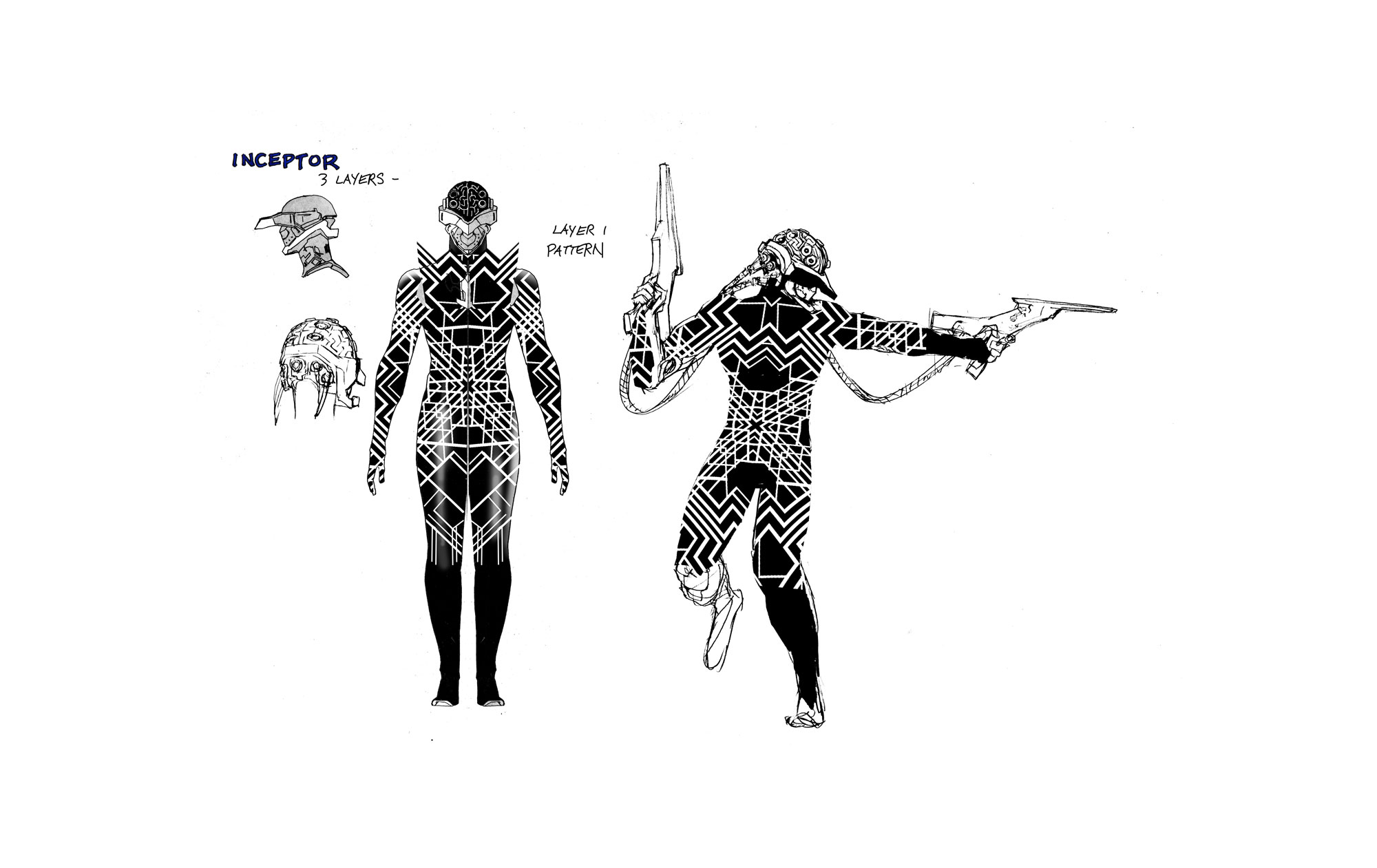 MS: The details of the book, from Easter eggs to elaborate page layouts, are just astounding. How have you been coordinating with Travel Foreman on that level of intricacy, and what kind of things should savvy readers be watching out for?

SO: As with the designs, a lot of this comes down to trust and collaboration. Knowing Travel’s backlist and how he can innovate a page, I kept things as loose as possible once the world was designed and peopled, so that he could have room to do what he does best without me leaning in to constrain.

It can be challenging to step back, regardless of what part of the creative team you’re on – but for me, we’re in this for collaboration, and that means giving up some of your control and final cut for a product that is unique and speaks to what the TEAM creates, rather than the individuals.

And that’s how Electric Warriors grew on, page to page. As far as Easter Eggs go, there will be many! Not to intimidate new readers but too add extra seasoning for long time ones. They’ll be quiet but tasty. Keep an eye on where the other Electric Warriors come from! 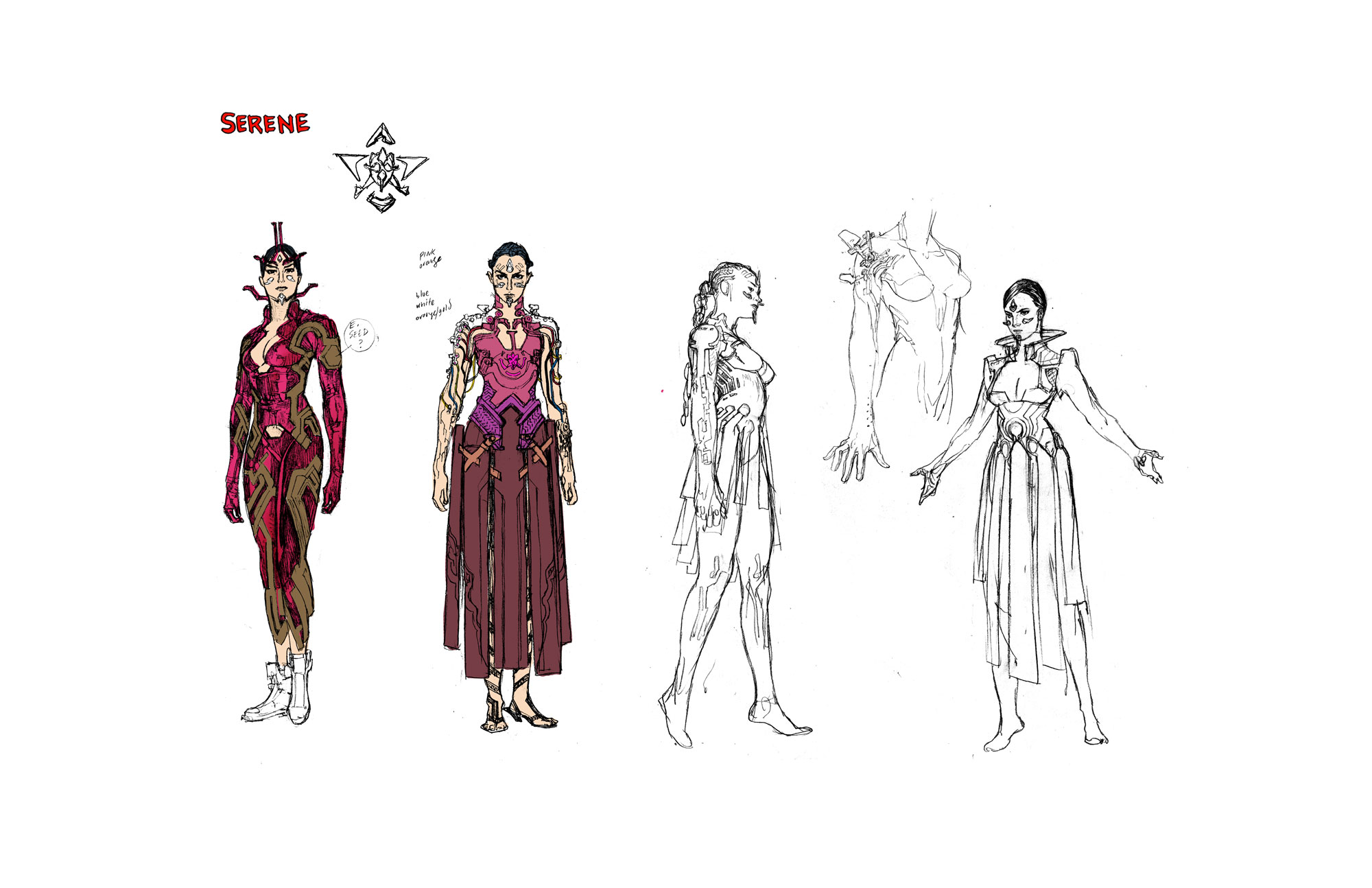 MS: Any final thoughts on Electric Warriors #1 or what fans can expect from the series as a whole?

SO: Adventure, violence, and CHARACTER! The Planet Covenant, home to trials by combat with whole civilizations on the line, is a pressure cooker. Tensions are high at every moment, but it’s a great place for our new heroes to live, love, and fight for their damn lives at every turn, because every second matters and every morning could be their last.

They’re Electric Warriors. They’ve chosen to lay down their lives so that one may die in the place of billions. Every second of the lives is now high stakes.