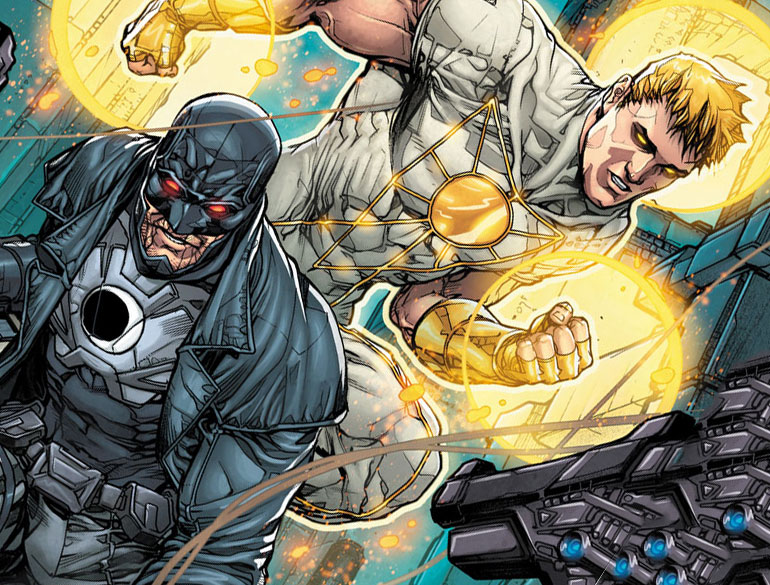 Here’s a story of a book that everyone loved (and reviewed) and no one ordered.

Midnighter was easily one of the crown jewels of DC Comics’ DCYou promotion in 2015, pushing the gay hero to new heights of recognition and critical acclaim. And yet, the Direct Market refused to sit up and take notice. Fortunately for them, and thanks to a very healthy performance in the Book Market for Midnighter Volume 1: Out, they have another chance with Midnighter and Apollo.

Once again taking point on DC’s premier queer male couple is writer Steve Orlando, who sat down to chat with Comicosity about bringing Apollo to the table, working with new series artist Fernando Blanco, and digging deep into the DC Comics archives for the series Easter eggs. 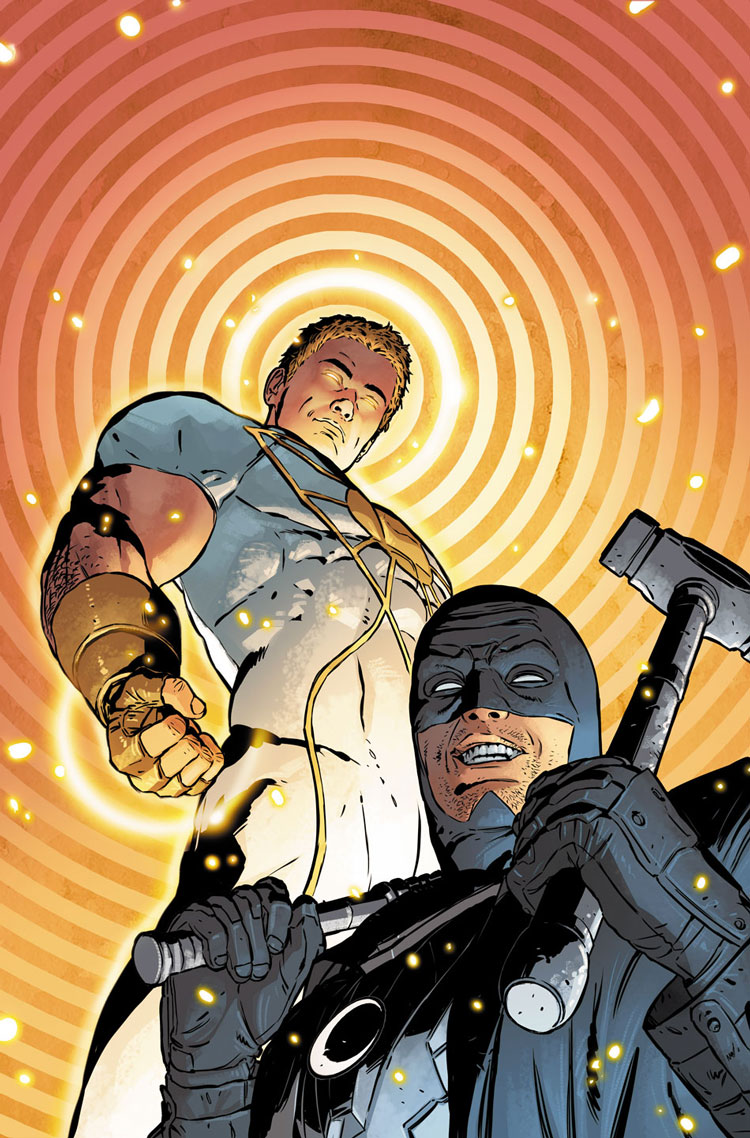 Matt Santori: Let’s talk a little about the boys. You started off Midnighter with M very much single and ended up bringing him and Apollo back together by the end of that run. What are some of your thoughts on the process of rekindling that relationship there and now in their joint book?

Steve Orlando: I think it was about giving them a stronger foundation as a couple and for their relationship. They had already been toying with giving it another shot at the end of Midnighter, and like so many of us do, they got back together — and far before that, in their minds.

What we wanted to do in Midnighter is give both of the characters a chance to find out who they really were as individuals, so that when they come back together, their relationship would be one of choice — not necessity or obligation. I know that sounds weird, but I don’t think it sounds unromantic at all. We never want to be with someone if we can’t survive without them. We want to be with them because it’s the first, best choice of how we want to spend our lives. And not because there is no other choice.

I think that’s something a lot of us see in relationships in real life. It’s something I’ve dealt with, and now they know. They’ve been out there. They know that they can each survive on their own. The world’s not going to end. But it’s going to be better if they’re fighting out there together.

MSG: You mention that we’re getting to know them as individuals. We definitely have that sense with Midnighter after a year of deep focus. Will we be opening up Apollo in the same sense in the new series?

SO: We’re definitely going to be spending some time with him. If you’ve read Midnighter and Apollo #1, you’ll see Apollo is in a place where he can stand on his own at the end of the issue. I think it’s a great moment, as they fight that fight, for Apollo to show the world, the readers — and the villain of the series — who he is. And it may not be who people think. 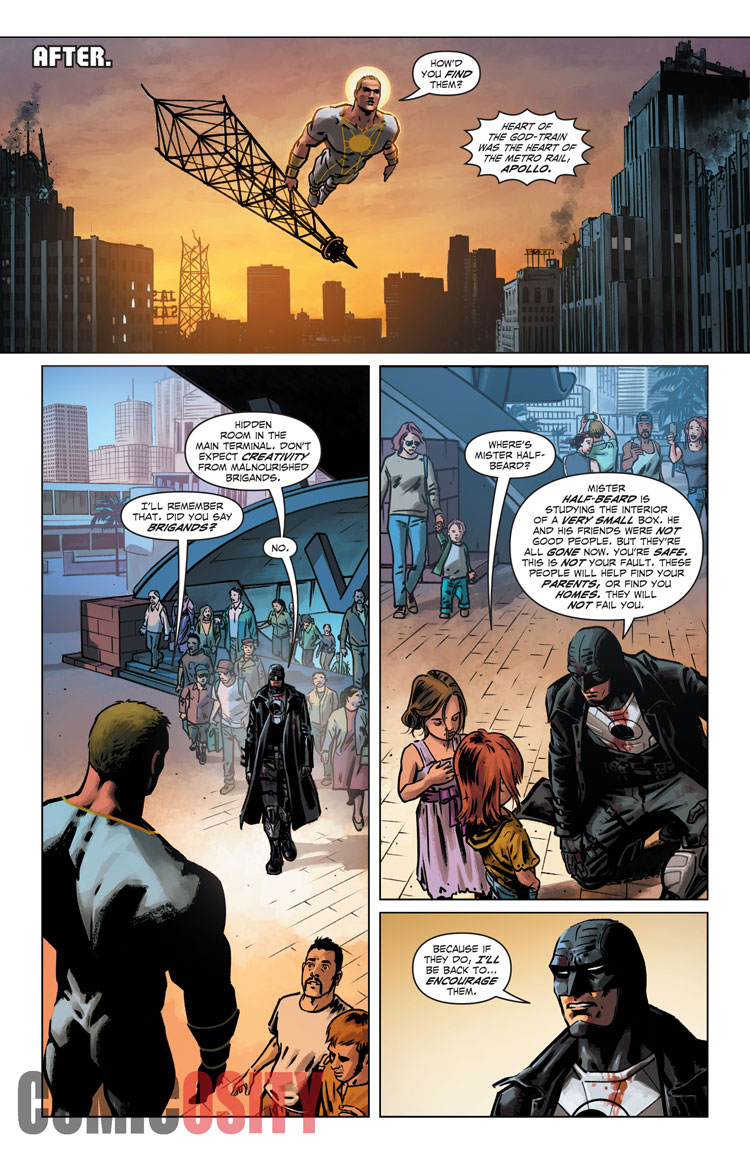 I think this is definitely the moment for that — and to see the subtle differences of their points of view. Apollo and Midnighter both kill, as we discuss in issue #1, but Apollo has a different point of view. He has had more of the trappings of a traditional childhood than Midnighter, at least in the current continuity. So, when he does these things and sees Midnighter doing these things, he thinks about them in a different way.

I think back to the scene in the Millar-Quitely Authority run, and Midnighter is facing off against a werewolf who says, “Wait. I have kids.” And Midnighter decapitates him and says, “Well, they’re better off without you.” And maybe that’s true! But Midnighter doesn’t really consider that. It’s just a quip for him.

For Apollo, he thinks about the implications. It’s not so much about “is it necessary?” but it’s more about when we do it, why we do it, and how we do it. I think that his point of view changes what Midnighter ultimately does, and how could it not? He is an intrinsically different character. 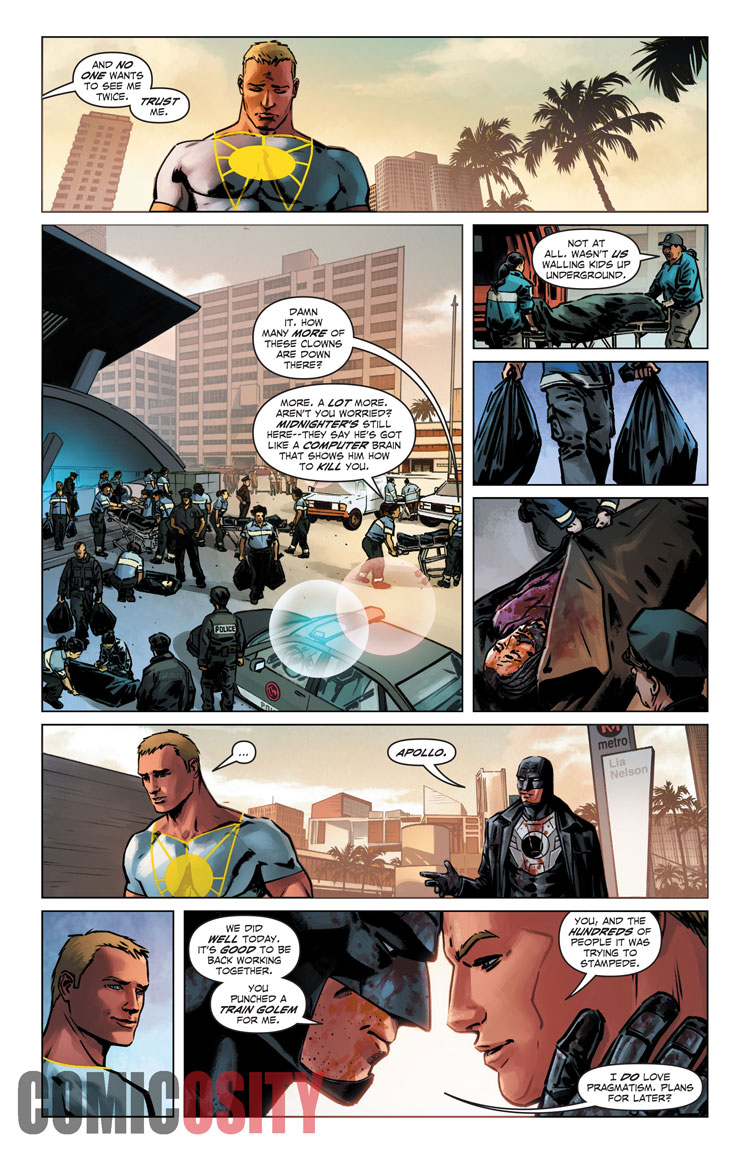 MSG: This is probably a super-geeky comic book fan question, but I know who I’m talking to here, so I’m going to ask it anyway. Apollo and Midnighter have a robust history prior to the New 52 that may or may not be back in the wake of Rebirth. Will we be seeing any echoes of that life before?

SO: You know, Rebirth is not a reboot. Everything that was true in Midnighter is true now. I’m still building off what we built there. Honestly, there would be a lot of weird things to unpack if they woke up one day and realized that they had been secretly married for years. And where is their kid? There’s a lot of strangeness to that, and I want to celebrate these characters. I don’t necessarily think dealing with that now is where the story is.

We only have six issues (of course, we could come back again, as we did this time) and I want to get into who these characters are and what they mean in the present climate first. I would love to have the luxury to explore those other things down the line as well, depending on what happens after this story completes. 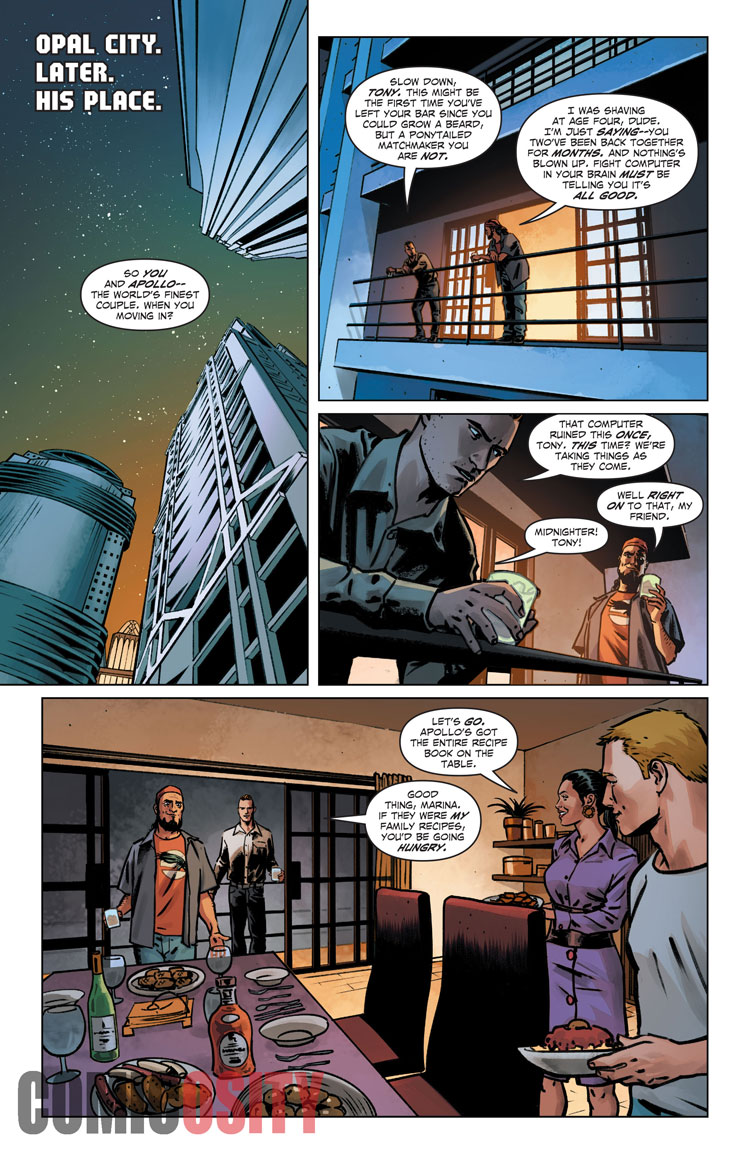 MSG: Let’s talk about that coming back. We’ve heard anecdotally that the first volume of Midnighter has been doing really well in book stores and obviously very critically acclaimed, despite low Direct Market sales. How did the new series come to be?

SO: Well, honestly, it was very easy. I knew that sales were strong on the Midnighter trade. As authors, we can sign in on Amazon.com and see how all our books are doing — which isn’t the whole market, but it gives some indication. I went to lunch with Dan DiDio and asked if there was a road to doing more with Midnighter and Apollo, because I have more to say.

And he said, “Absolutely there is.”

That’s how it happened. It was a dinner in Seattle and the support of the readers making their love known — more than would have been estimated based on the monthly sales. 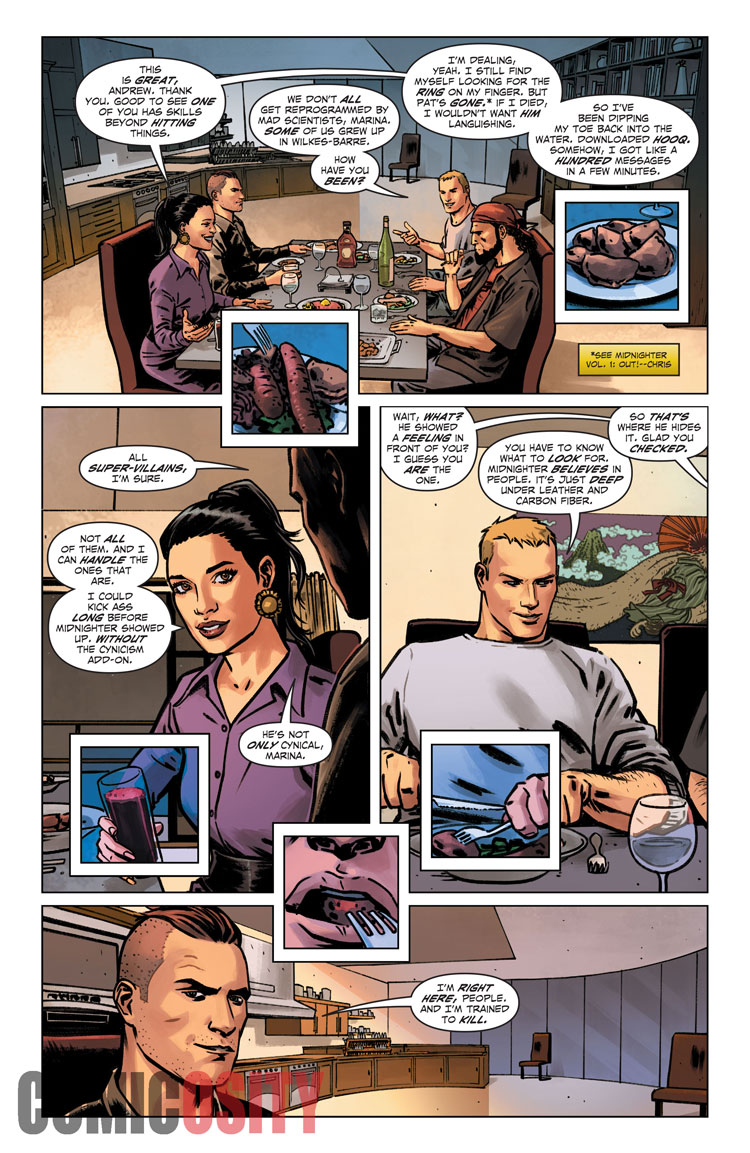 MSG: This series is launching off with a different artist, having previously worked with ACO primarily. How are you writing differently for Fernando Blanco this time around?

SO: ACO recommended Fernando personally, so I think he had a lot of confidence in him to step up to the plate for this series. And we have Romulo Fajardo back, who is one of the best colorists in comics.

But as for writing for Fernando Blanco, it’s all about trust. As a creator, I never try to overly manage my co-creator, because the book will still happen. There’s a lot of ways to make a comic happen, but the way they happen the best is knowing when to lean in and when to step away. I read a ton of Fernando’s work before we began on the series and it showed me a little of how to go.

I’ll say, “OK, here’s what happens on the page, Fernando. I know that anything that you do in terms of layout and pacing will be more creative than what I could possibly put in the scripting. These are pages where you can really dig in and show your stuff.”

And that can be nerve-wracking, perhaps, but that’s part of collaboration. Knowing when to not be there. I know that sounds ridiculous, but knowing when to trust your co-creator and knowing the type of things — by doing the research — that they can really dig into and knock out of the park. And providing the moment where they can really do that.

To me, that’s the work. That’s our jobs as collaborators. 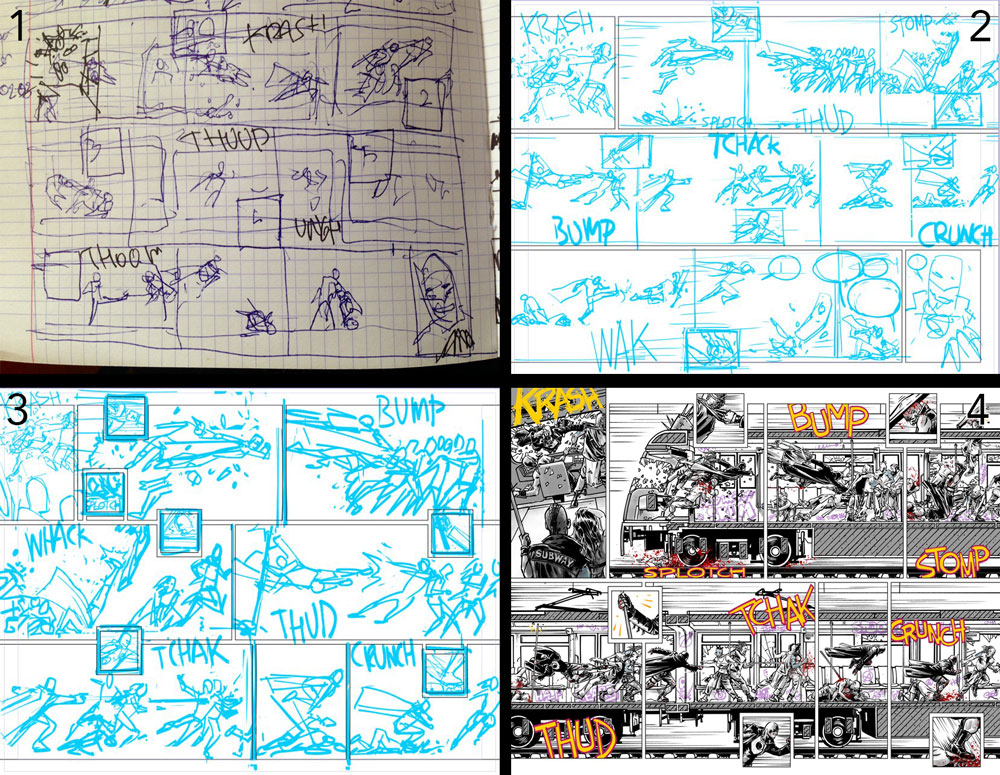 MSG: We can tell from issue #1 that you’re still maintaining this balance of hardcore action and more domestic, emotional space. It seems like Fernando is really carrying that through as well.

Yeah, Fernando does a great job, and you’ll see as the book goes on that he has an intrinsically different style than ACO. It’s incredibly exciting and incredibly creative. I’d much rather see that than him coming in and worrying about looking exactly like ACO. I don’t want that. I just want the best damn book it can be and that’s what we’re getting. 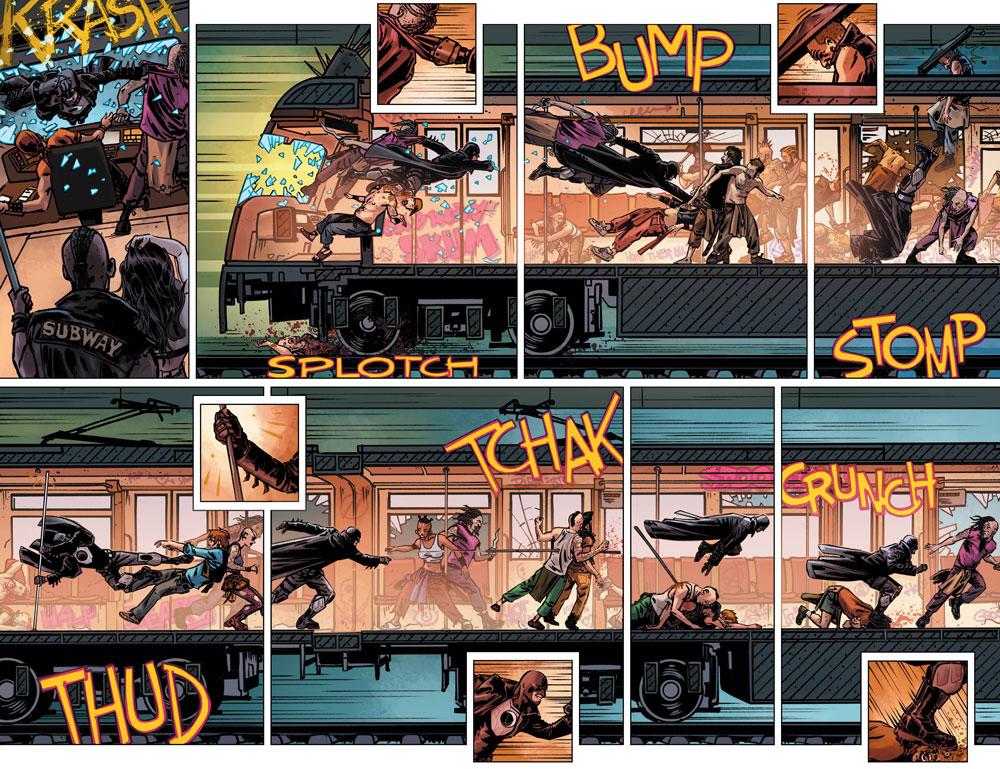 MSG: We’ve already seen in preview pages that the subway pirates from Grant Morrison’s Seven Soldiers series are here, and there are more than a few obscure Easter eggs later on in the issue. What’s driving that as a creator — and maybe even as a fan?

SO: The overarching point of view for the series is the richness and uniqueness of the DC Universe. A world in comics where you can open up page 1 and it’s subway pirates, but by the end, you’ve seen a bunch of different wizards and a six-armed gun-toting demon from Hell. It’s the fact that anything can truly happen.

That’s the macro view, but I also feel like that’s what makes comic books truly special. I try to do that in all my books, as much as I can.

In the case of the subway pirates specifically, I think on some level it’s just fun to see Midnighter punch pirates in the face. And Seven Soldiers: The Manhattan Guardian was a lot like Midnighter. It wasn’t as violent, but it was a book that really delved into relationships and real life heroism.

The same goes with using characters from Hitman. I think the tone of a lot of that Garth Ennis/John McCrea work is adjacent to Midnighter. We have a little sharper edge, and there’s a little more of a razor blade in the cynicism and force of our narrative, but there is that little tweak of sarcasm and satire that I think is inherent in that book. Midnighter inhabits a world that is just a bit horrifying and just a bit absurd. 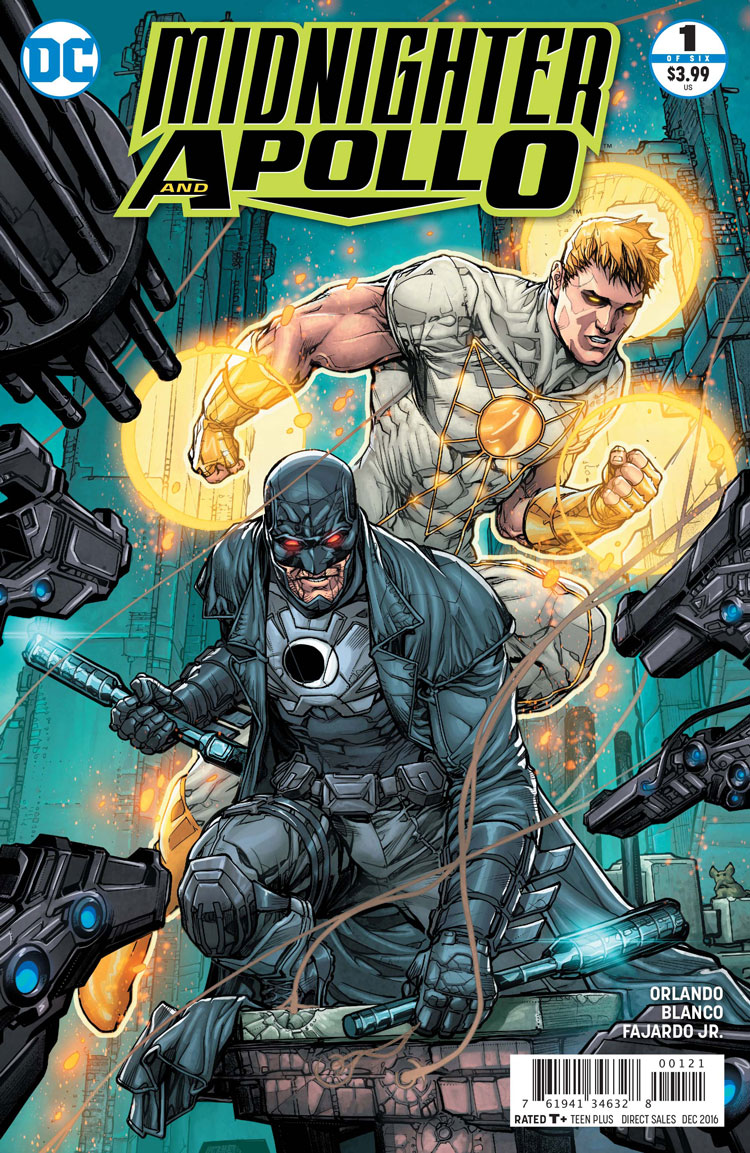 MSG: Well, I have one more question — off Midnighter and on to Justice League of America, your book dropping next February. Without spoilers, obviously, what is the one thing or the biggest thing that you have to take into consideration to build the perfect JLA roster? (you know we love to talk rosters at Comicosity!)

SO: I think the easiest answer in terms of the Justice League OF AMERICA is that this Justice League looks more like America than ever before. And I think that’s one of my biggest responsibilities as a creator.

Steve Orlando’s Midnighter and Apollo #1 arrived in stores and online today. Orlando is also the upcoming writer on Justice League of America for DC, as well as currently helming Supergirl.