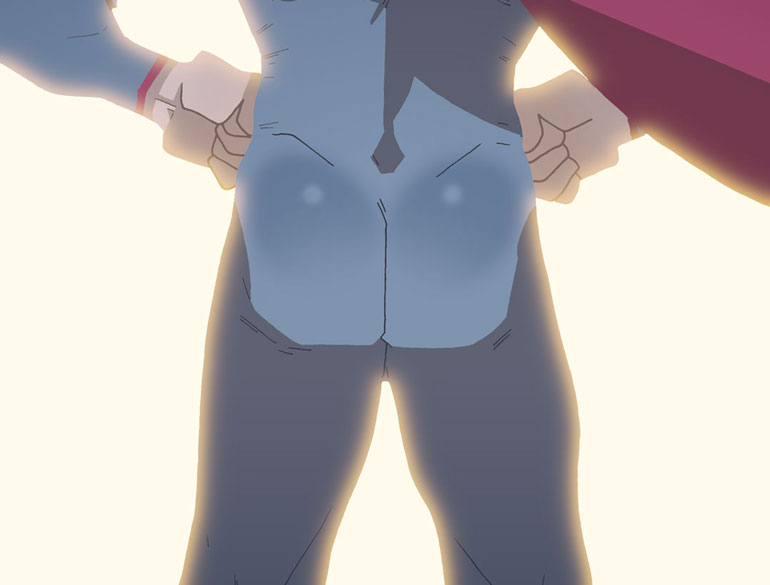 Sex in comics. It’s be been a part of the medium since the very beginning, thanks to concepts like the “Tijuana Bible,” explicit strips that frequently featured cartoon characters and actual celebrities, passed around like contraband since the 1920s.

The permissiveness around depicting sex in comics has yo-yoed throughout the intervening years from the Comics Code, inadvertently creating the burgeoning underground scene that played host to the likes of R. Crumb. All of which led to the gentle, but insistent, push from titles like Sex Criminals and Saga to expand what the mainstream will accommodate.

What hasn’t changed much over the years is that it’s straight, white, cisgender men appearing most prominently on either end of the tug of war — leaving queer and female oriented work perpetually on the margins.

It’s a state of affairs that Oni Press’ Limerence imprint intends to tackle by curating a broader spectrum of sexuality than typically seen in comics. Given that it’s a topic I’m pretty deeply invested in, I jumped at the chance to talk to Meredith McClaren about her upcoming graphic novel Super Fun Sexy Times (due out in 2019), exploring superheroes sex lives from all the angles we never get to see. 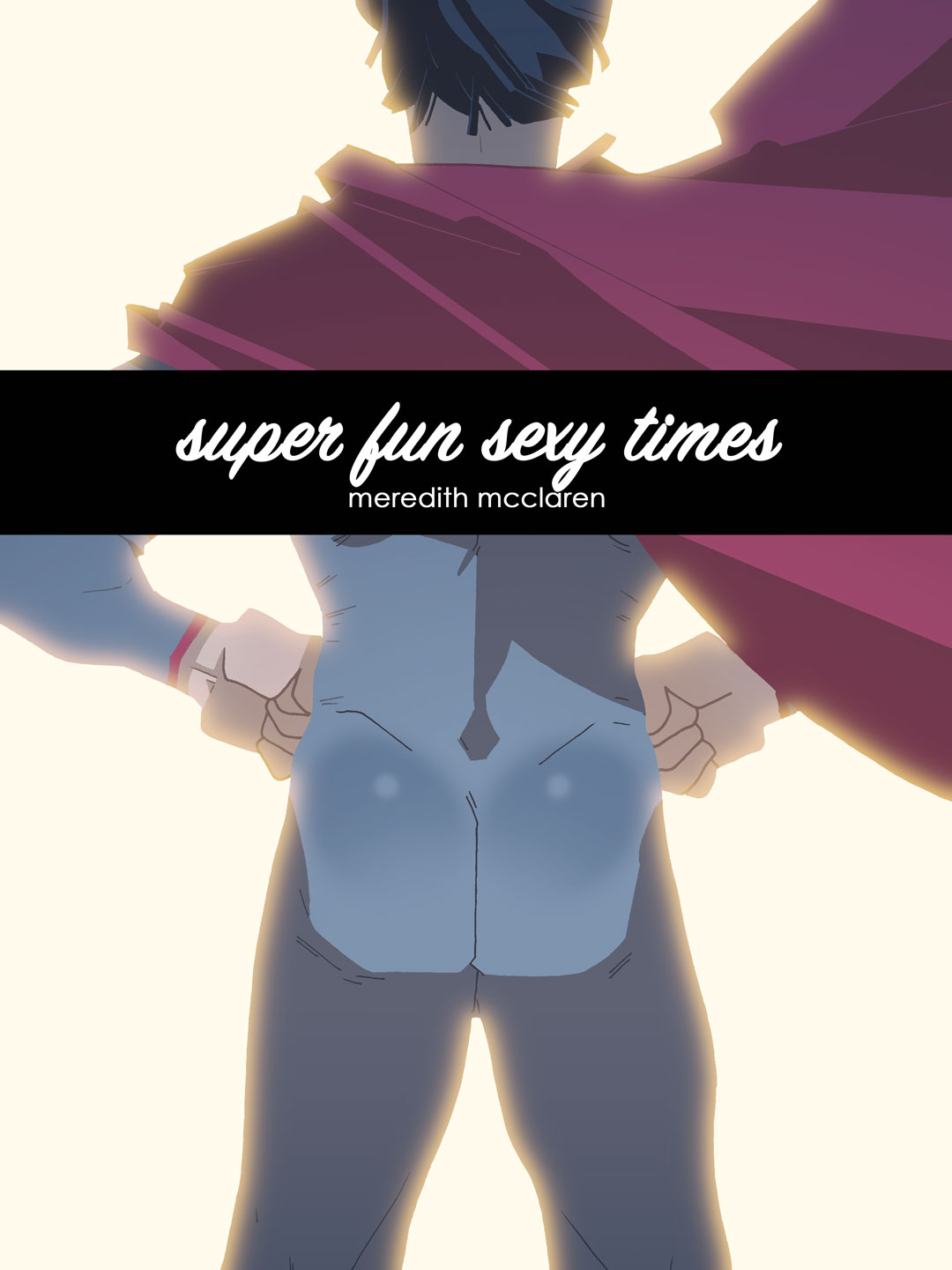 Véronique Emma Houxbois: Was there a specific spark of inspiration that lead to Super Fun Sexy Times?

VEH: What I find utterly engrossing about comics right now is how in the 1980s, the big push to deconstruct super-heroes and fantasy narratives was to situate them in the political realities and anxieties of the cold war.

Whereas now, and what Super Fun Sexy Times looks like it’s the vanguard for, is a much more granular and personal version of deconstruction focusing on the mundane: relationship dynamics, sex, and conventional day jobs. What is it about that approach that appeals to you?

MM: I think what appeals to me about the more personal, quieter moments of super-heroes is just that for most of comics. We usually only see them reacting to crisis scenarios of varying degrees. We do get tidbits here and there of smaller personal elements, but stuff gets waylaid by the villain of the week. Reminders that they are occasionally boring people too, have always attracted me as a story. It makes the big stuff more real.

I also think a lot of people are experiencing EVENT fatigue. Super-hero comics are geared yearly to these huge overarching events that don’t really allow for much detail or character processing. It’s very too much. 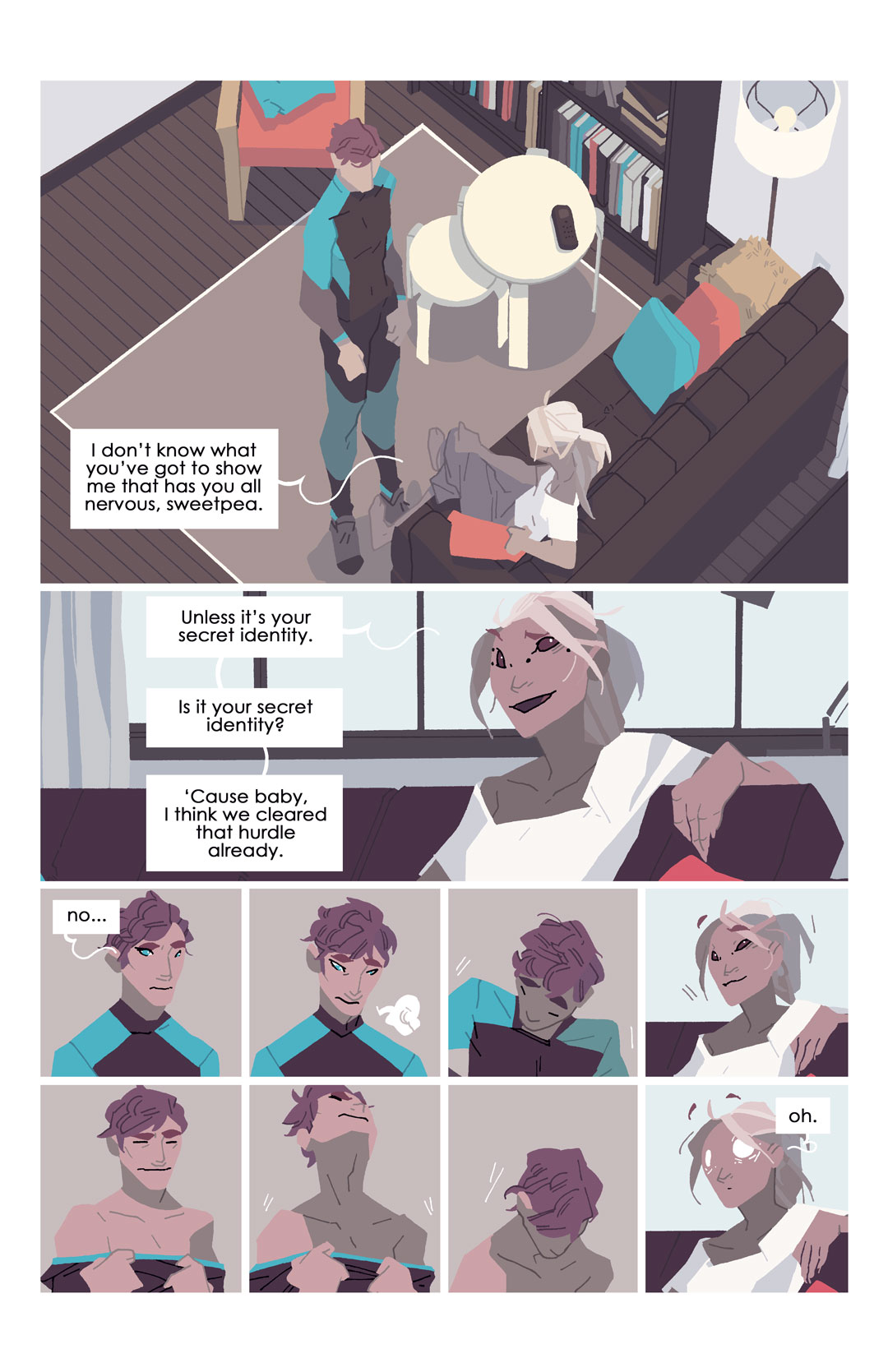 VEH: Of course the mundane can also be spun into high drama like Junji Ito’s Cat Diary!

Are the sensibilities of fanfic something that consciously inspire you?

MM: Yep yep. I am definitely influenced by fan fiction and fan art. Community involvement in properties always fascinates me. The many vantage points they offer across various perspectives, disciplines, and philosophies gives stories something new and vital that their core creators may not have had access to.

And in a lot of properties it is fans’ involvement that keep the work in the public sphere and relevant.

In my own work, I’m always happy to leave a little bit of the sandbox to the audience to play with.  I love seeing what they do with it.

VEH: Something I really appreciate about fan fiction (also a big theme in Stjepan Sejic’ Sunstone!) is how it provides a space for characters to explore new aspects of themselves or their desires in a safe environment that can be especially impactful to queer readers.

It’s a dynamic I’m seeing in play in the three page excerpt where a male superhero is revealing to his partner that he wears lingerie under his costume. Can you break that scene down for me?

MM:​ Yeah, in the scene you’re addressing, super thief Shade is revealing that he sometimes likes to wear lingerie under his outfit. This revelation is being made to his girlfriend Recluse, who is a mad scientist spider lady.

They’re both trying to navigate this situation carefully. When it comes to kinks, sometimes no matter how much faith you have in your partner, actually coming forth and outright addressing your interests is nerve-racking. And in this case, Shade’s kink threatens a societal view of masculinity.

It’s a situation that can make both partners nervous. The one being open fears rejection. The one being confided in fears causing harm. Both problems stem from a desire by each party to have a continued healthy relationship.

And even with the goalpost of a continued healthy relationship, things can still get flubbed. Recluse flubs. A little bit. She tries to resort to humor to alleviate tension and that gets misread as flippancy. I want to show that these things happen. Anxiety makes us react in wildly different ways. But it’s something you can recover from if you’re earnest and talk through it.

Though the book is a sexy times romp, I really wanted to drive home with each story that 1. sex has it’s awkward moments both funny and cringe-worthy, and 2. Talking is important. 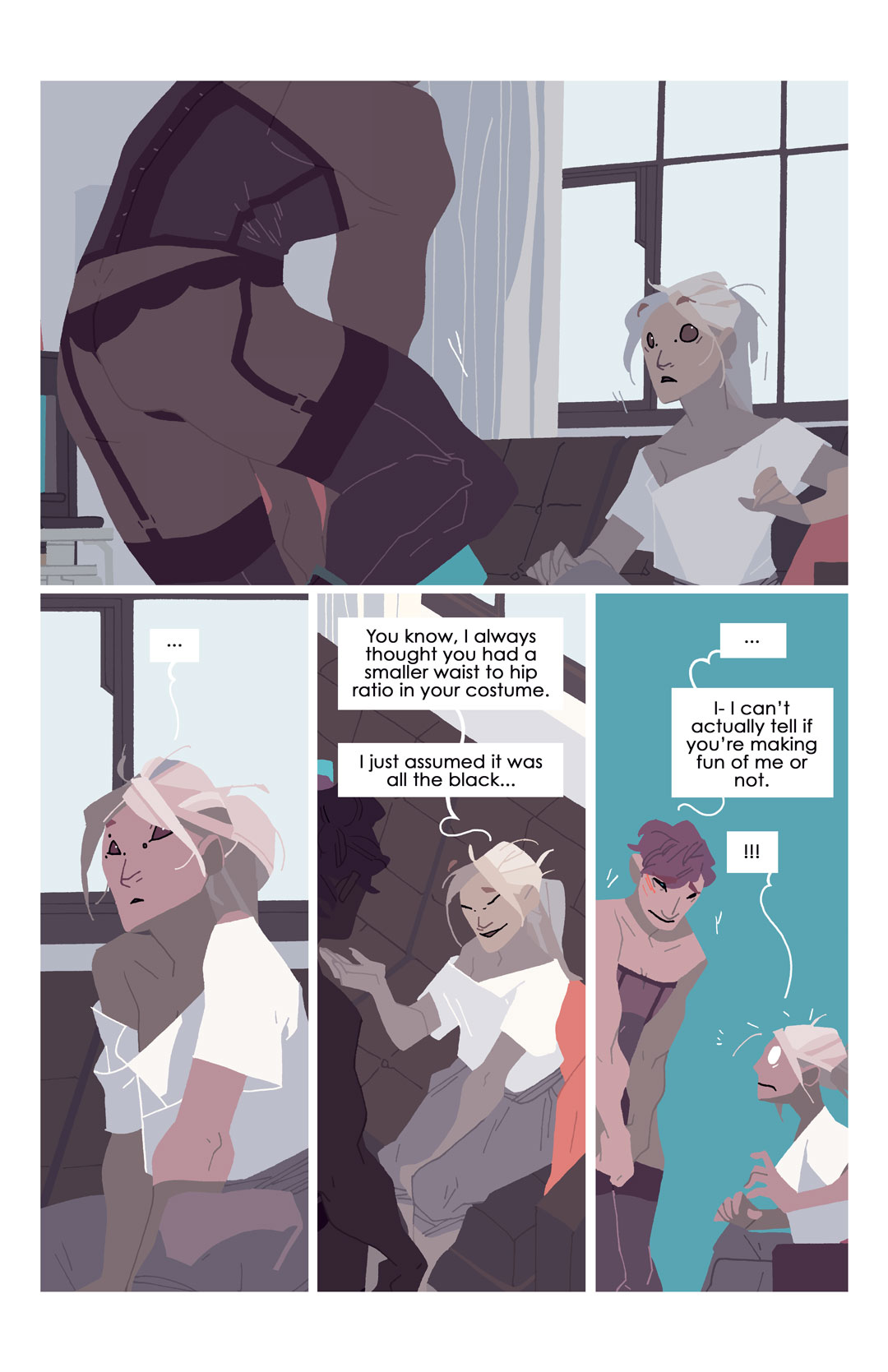 VEH: That makes perfect sense and — to me — highlights the shift in discussing and portraying sex that we’re seeing unfold right now.

There’s an iconic sequence in Flex Mentallo portraying a superhero sex club that was aimed at destigmatizing the idea of using superheroes as a means of exploring our sexual imaginations. That was just over twenty years ago and it feels like yesterday in terms of how little progress there’s been in moving that conversation forward.

How many other characters will we be following in Super Fun Sexy Times? Can you give me any hints about what other relationship dynamics or issues you’ll be exploring?

MM: I have never heard of Flex Mentallo. I will have to look it up!

But yeah. Superheroes and each of their particular quirks can be used to address real world diverse human natures. We see it so much in other aspects. But it seems underutilized when it comes to sex, intimacy, and the kind of relationships people have.

Super Fun Sexy Times will be made up of five short stories following different relationships each time. And I hope that future installments feature more. There might be cameos or reference of characters that already had stories, but I can’t guarantee anything so early on.

If given the chance, I would like to give time to every kind of relation dynamic I can think of. The first book is just a dip in the pond, with trans/cis, lesbian, gay, straight, bi/non-binary couples, each at various stages of their relationships.

But I really want everyone to have fair play if the series does well enough to continue. The more I can represent in body, sexuality, ethnicity, neurodivergence, and relationship structure  (relationships that don’t just fall in the perimeters of only two committed partners) diversity the better. There are a lot of different kinds of people who don’t get to see themselves represented in intimate settings. They deserve to have their sexual lives, the fact that they have them, and the fact that they’re healthy, acknowledged.

VEH: I especially like the idea of putting those relationships in parallel, to open up overlapping audiences to experiences outside their own lives. Polyamory is the closest term I can think of for what you mean in terms of different relationship structures.

Flex Mentallo is pretty out there, it’s Grant Morrison and Frank Quitely spinning off from Doom Patrol, but it’s a great deconstruction of toxic masculinity within superhero narratives.

To wrap up, has doing a long form project like this as both writer and artist changed your process or outlook on making comics at all? Has the work itself altered your perspective on anything you’re depicting in Super Fun Sexy Times?

MM: Polyamory is the closest definition, but I wasn’t sure if that included open relationships, which is a dynamic I would like to give time to as well.

I had to read the wikipedia write up for Flex Mentallo.  That is a trip. 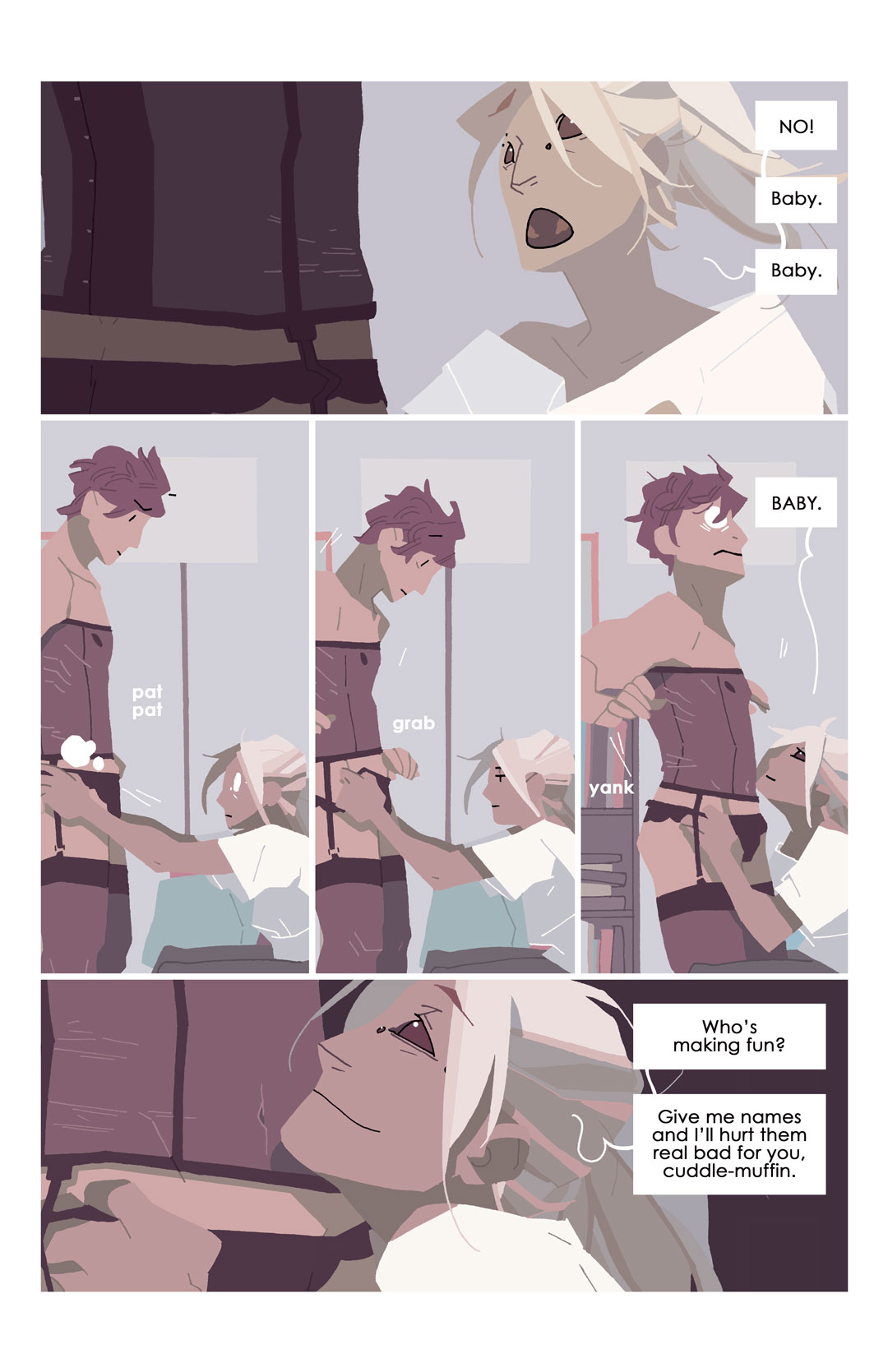 I’ve been the writer and artist on a few side projects, so there is some ground already broken there.  It lets me play a little fast and loose with the progress usually.  Wherein I won’t have dialogue fully fleshed out until the page is complete.

But this will be the first project where I have an editor from the beginning of a book I am writing and drawing. And that does make me focus a little more on fine tuning throughout, instead of at the end. It’ll be good for me to work in a different way.

It feels like it would be very easy for me to make a misstep that, through ignorance on my part, could inadvertently cause very real hurt given how invested people are with these types of stories.  I want to avoid that at all costs.  I want my book to give people joy.

It would be nice if Super Fun Sexy Times could make people a little hot under the sheets too.  But it’s more important to me that my audience feels HAPPY after having read it.

There has also been a significant change personally too.  Things change when people realize you work on an adult book.  It’s weird ground to navigate.

VEH: Thank you so much Meredith! Do you have any other closing thoughts I haven’t gotten around to?

MM: My only remaining thought is: ‘Gosh, I hope I’m good at this.’