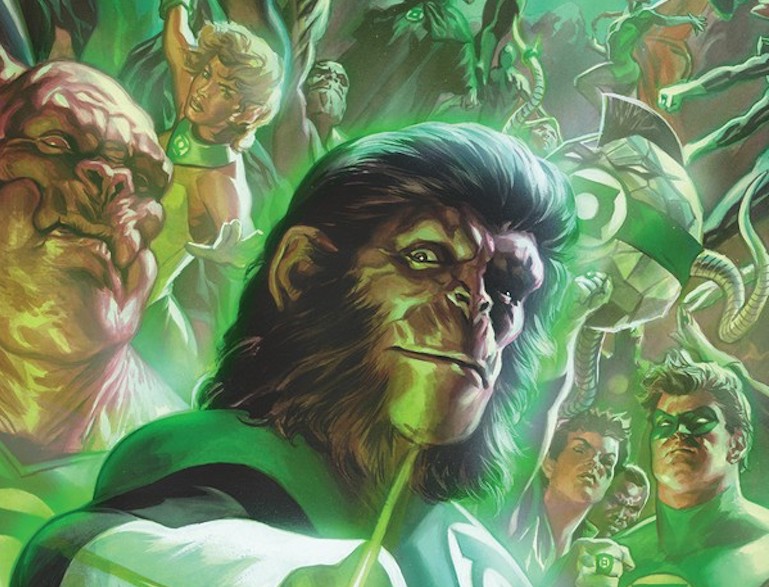 Out of all the possible crossovers, who wouldn’t want to read a Planet of the Apes/Green Lantern one? I talked to Robbie Thompson, Justin Jordan, and Barnaby Bagenda about this crossover event! 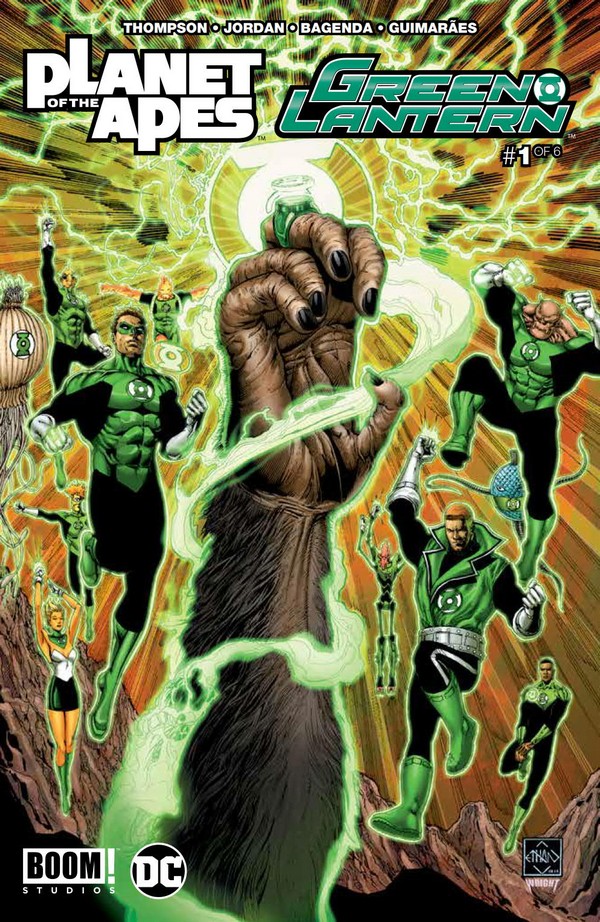 Mexi Gremillion: Robbie, I love your work on Supernatural and Silk. I knew I was in good hands when I saw that you created this miniseries. A Planet of the Apes/Green Lantern crossover story sounds like a very intriguing yet strange mash-up to create. What inspired you to choose these two?

Robbie Thompson: Hey, thanks so much for the kind words. I feel really fortunate to have been a part of this crossover and I can’t wait for folks to see what we’ve come up with. As for inspiration, credit for that all belongs with [BOOM! Studios Editor] Dafna Pleban. When she called me up to pitch on this book I was hooked from the title alone! But when she started to unpack the potential for a series like this, I got really excited—we had a ton of fun cracking this story open, and Justin’s done an amazing job of bringing it to life.

MG: Justin, I love your writing in this first issue of the miniseries. My favorite pieces of writing are probably all of Guy Gardner’s lines. He’s self-absorbed in the best way. What’s been your favorite thing to write in this crossover thus far?

Justin Jordan: It’s Guy! I’d actually never written much, if any, Guy Gardner before. He was being written by Charles Soule when we were all on the GL books, and the nature of my book meant there wasn’t much crossover. But he ended up being super fun to write. I think I got into the groove of Guy Gardner’s voice pretty right away.

MG: Robbie and Justin, the “Universal Ring” seems fascinating from the instant it appears. I can guess some of its capabilities from what’s been seen in this first issue, but I think the most surprising power it has is the ability to rip holes between universes. Will we be seeing more strange abilities from the ring in the issues to come?

JJ: Oh, yes. Probably not QUITE as strange as the time ripping, but the Universal Ring was hidden in a closed loop timeline for a very good reason. It can do everything any ring can do, and has a few special powers on top of that. For one thing, trying to fight it with other rings makes it STRONGER. 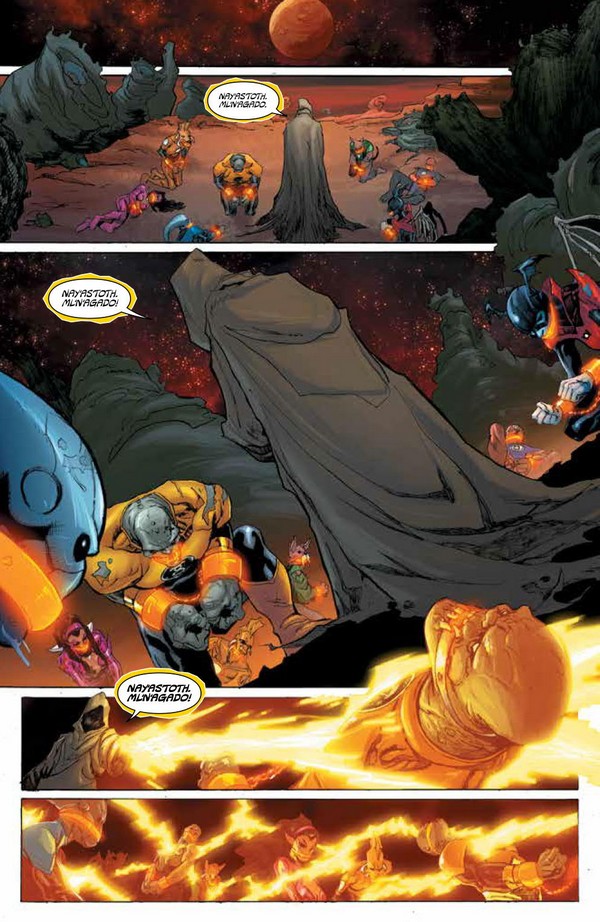 MG: Robbie and Justin, Cornelius, who has gained the powers of the “Universal Ring,” seems to have a lot of parallels between himself and Sinestro. They both want to bring peace and order to their homes by any means necessary. Heck, he and Sinestro even have extremely similar backstories as anthropologists dedicated to understanding long-dead civilizations. Were these parallels intentional? Are they foreshadowing for what may come in later issues?

JJ: Oh, yes. And actually, there are also parallels between Cornelius and Hal, which were also intentional. Which is not a surprise, as Sinestro and Hal are similar in many ways. In this, Cornelius is sort of perched on the edge of becoming either of them.

RT: When we were “casting” the story, Dafna and I were both immediately drawn to Cornelius and Sinestro—there are a lot of parallels between them, and Justin’s done fantastic character work with both of them in the series.

MG: Barnaby, I just wanted to say that I checked out your deviantart page and your work there is spectacular, especially the “Superman_Supergirl” piece. I can see why you were brought onto this project. How has it been working with Robbie and Justin? How did you get involved in this crossover?

Barnaby Bagenda: Thank you. That “Superman_Supergirl” piece was actually a commission and an homage to Michael Turner.

It’s been great so far working with Robbie and Justin. Before I started working on Planet of the Apes/Green Lantern, I already knew of their work on Silk and Green Lantern: New Guardians and I really enjoyed it. I’m very proud to be able to work with them.

I got involved when Dafna contacted me when I was still working on Omega Men. I like the experience on working on a new project so I think this is a great opportunity for me. 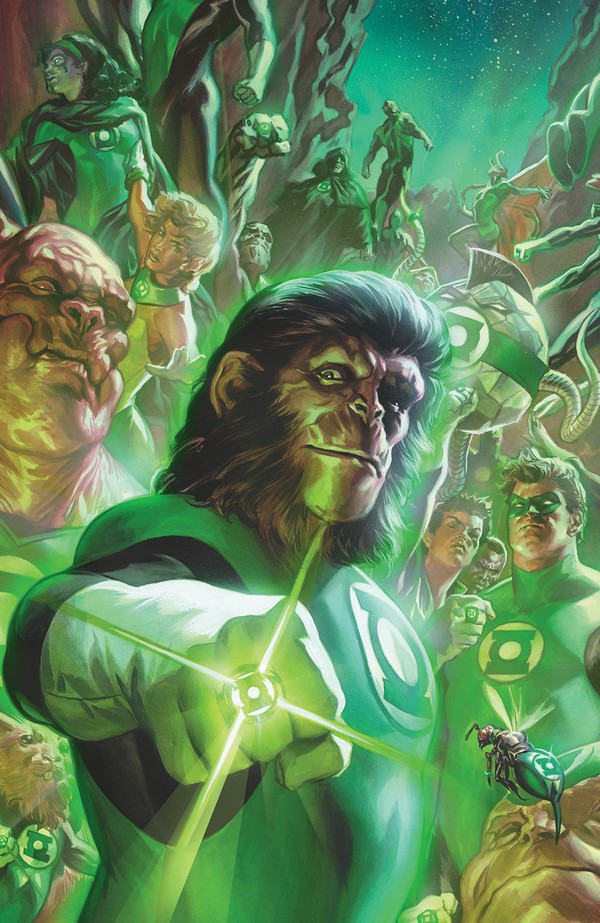 MG: Barnaby, my favorite art from this issue is from the scene in which two particular characters are transported from the regular DC reality to that of the Planet of the Apes. There’s something about the chaos of the whole scene that’s just so gripping. What’s been your favorite scene to draw for this miniseries so far?

BB: That would be Cornelius and Zira in the cave lab. I just like drawing all those lab gadgets and tools.

MG: Besides Planet of the Apes/Green Lantern, are there any other projects that you are excited about?

JJ: My first and hopefully not only Vertigo book, Savage Things, comes out next month. It’s about government-trained, living terror weapons turning on their creators. I am super excited about that. My creator-owned book, Spread, continues at Image, too.

RT: Silk and Doctor Strange and the Sorcerers Supreme. We’re bringing the tie-in to “Clone Conspiracy” to a close in Silk next and we’re starting a new arc in Sorcerers that I’m really excited for people to see!

BB: I get this question a lot and I really don’t have a good answer for that because I love most comics. Also, I like the challenge of bringing my own visual interpretation of the characters. But I’d love to work on non-superhero stories once in a while or maybe creator-owned comics.