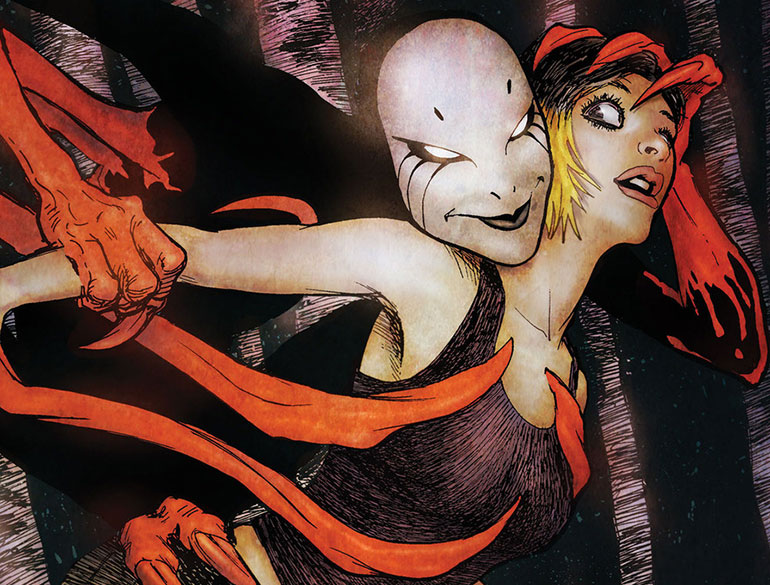 Anyone else having a hard time believing what we’re living in is real?

Well, writer Tim Seeley is here to make sure you’re not alone, as he and artist Stephen Molinar have launched a new series for the Vertigo imprint at DC Comics called Imaginary Fiends that’s sure to make you question… well, everything. With an invisible spider-woman, a pair of FBI agents, and that cat we saw at the end of issue #2, there’s plenty to talk about as Seeley digs in with Comicosity on tomorrow’s issue #3 and the series as a whole. 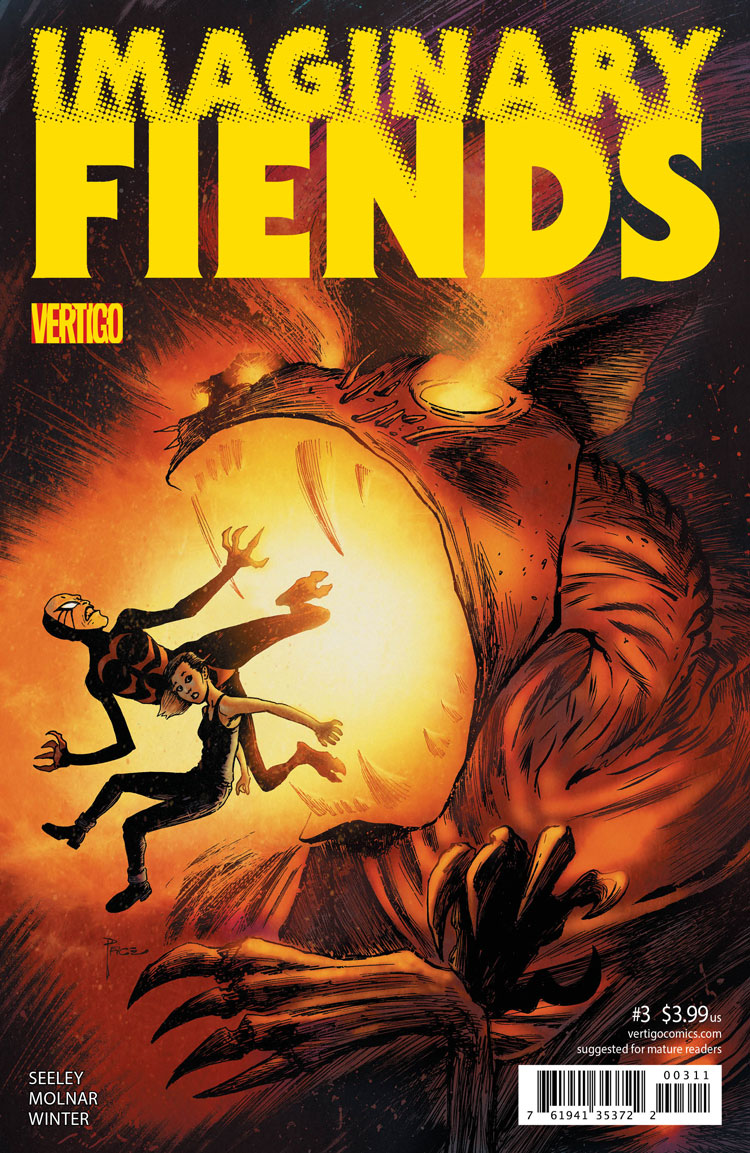 Matt Santori: To start, I want to hear a little about how the idea for Imaginary Fiends gestated in your mind. Like, where did this come from?

Tim Seeley: It started with the parallels of watching the real-life case of the Slender Man in Wisconsin with the reality that we live in politically in America.

If you’re not familiar with the Slender Man, it was basically two girls who convinced themselves that the Slender Man wanted them to each kill the other one. It’s really bizarre and terrifying.

Meanwhile, there’s this real assault on what’s real and what’s true, with people living with their own set of facts. This idea of people struggling to know what is real in their everyday life made me want to do a horror story about that. And also go back to doing what I like to do — and I think people like when I do — which is a girl-and-a-monster story. That’s apparently my specialty. 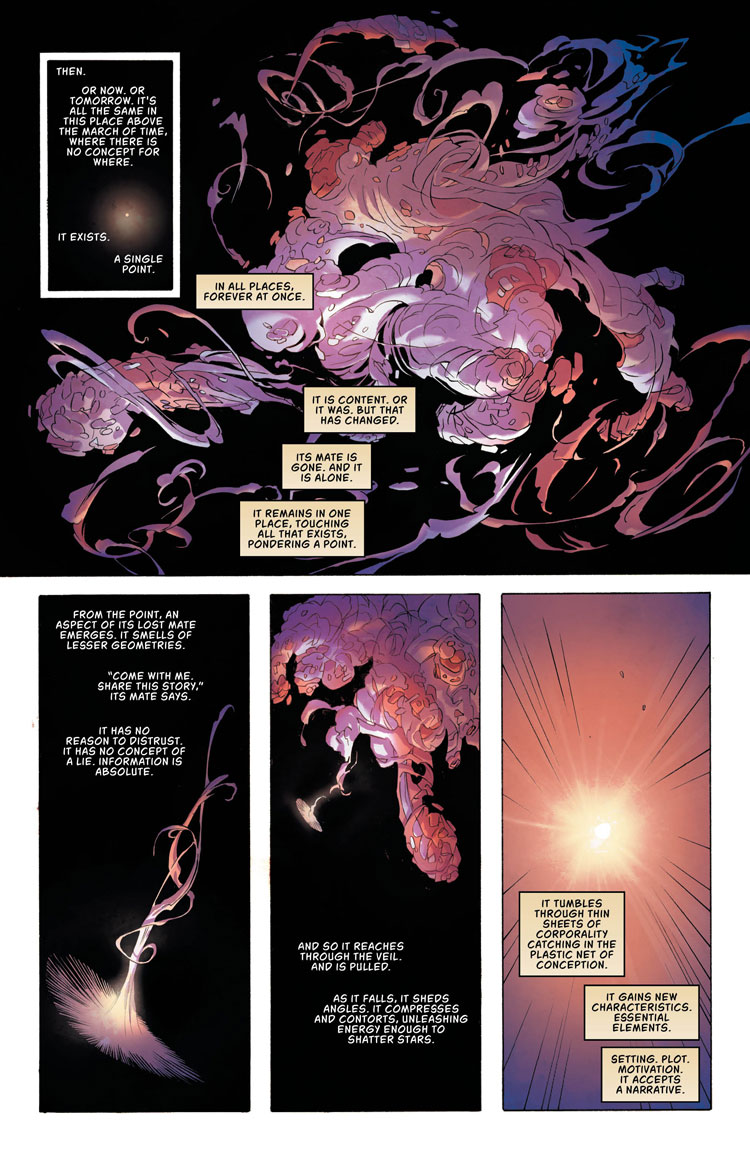 MS: Yeah, I mean, after working on Revival and Hack/Slash, that makes a lot of sense.

So, you’ve touched on this idea of “fake news,” but there’s also this interesting relationship between agents Melba Li and Virgil Crockett. It’s this idea of seeing but not wanting to see, and being unable to see but wanting to.

TS: One of the things we set up very early on is that the character of Virgil Crockett is a cop’s cop. He’s an investigator. He care about facts, and objective truth, and reality. That’s what draws him to be an FBI agent. But when he discovers there are these big, invisible monsters that he’s unable to see manipulating people, I think it bothers him more that he can’t see that or track that. He can’t use science the way he’s used to. And that presents a challenge.

The character’s main motivation is yes, to solve the crime, but he also struggles with the fact that he can’t partake in this reality that’s not there for him. And as we learned in issue #2, that caused him to miss something that affected his life. We’ll see more about that later.

Now, Melba’s character is almost the opposite of Crockett. She’s disappeared into her own fantasies to a degree, and is not really sure which of the things she remembers were real and physical, and which were in her imagination. How much of her was manipulated by this extra-dimensional creature Polly? 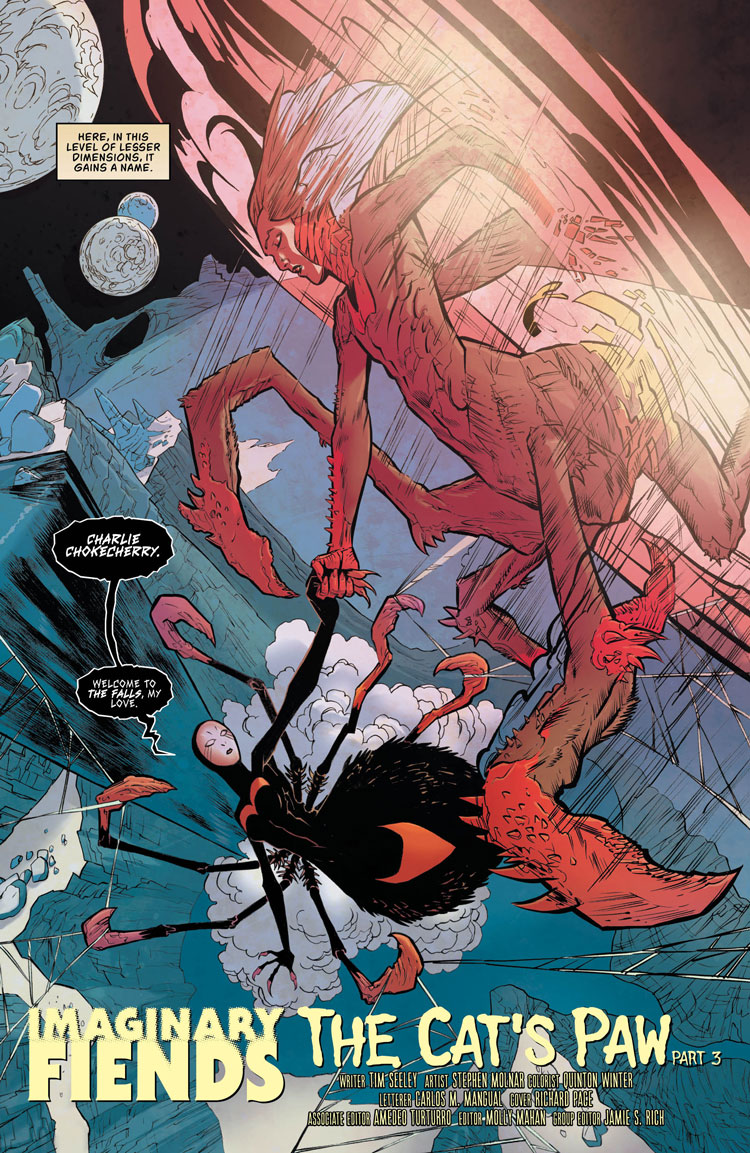 MS: Speaking of Polly, there’s something really interesting developing where she’s not simply a malevolent force. Her interest in Melba seems deeper, maybe even protective.

TS: If I want to get anything out of this story, it’s that we can make an invisible spider-woman from another dimension interesting and multi-faceted. That will mean I have totally done my job.

But I think the most interesting thing about Polly is the difference between what she needs and what she wants. You see in the first issue that she needs Melba to be afraid, because that’s what she lives on. But she also can’t push Melba so far that she decides not to live in the world, because if she does, she’ll kill herself. And that’s the worst case scenario for Polly. Because if no one besides Melba believes in Polly, then she wouldn’t exist if that happens.

She has a complex relationship with Melba, because she needs her alive and in fairly good health, but she can’t have her be unafraid. We set up a fairly precarious balance for Polly across the series. So, if someone else comes after Melba, that’s a problem for Polly.

Especially in issue #3 and #4, there seems to be some things that are altruistic in Polly. Or maybe not. Maybe she’s doing it selfishly. I kind of wanted to keep her mysterious that way. Does she give you things because she needs it — because she’s basically an animal or monster satisfying her need for food — or is it because she has human qualities and sympathy for people? 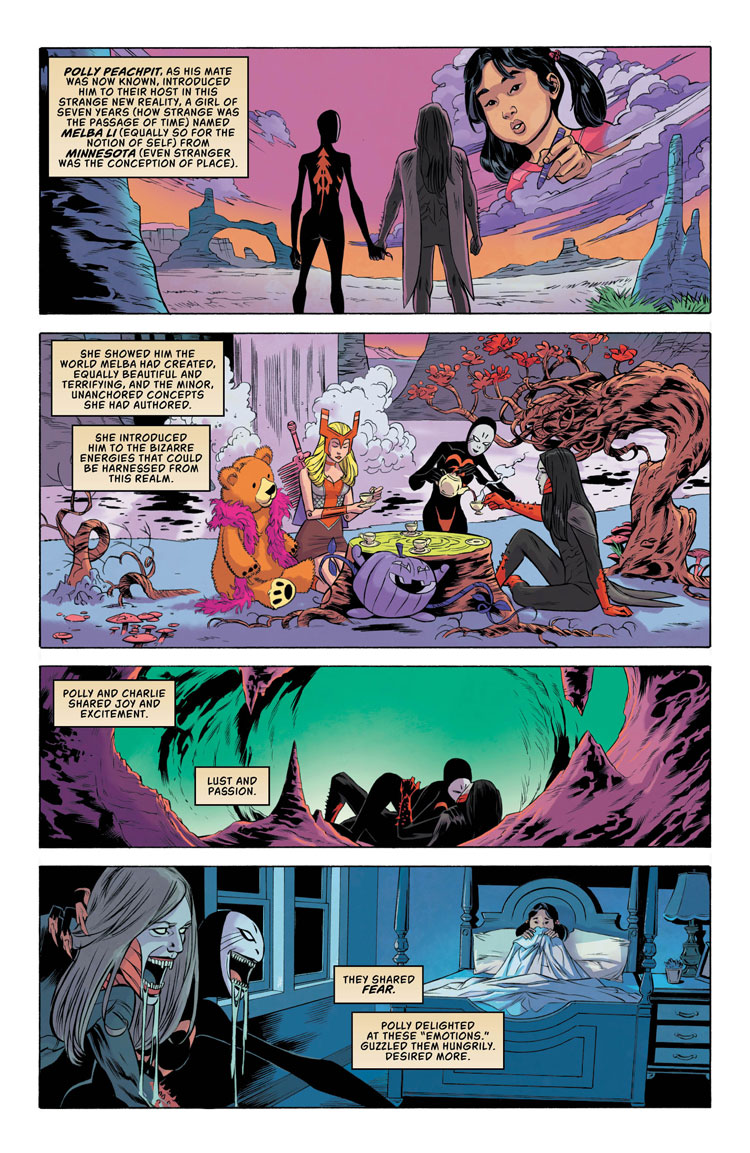 MS: Well, given what we’ve seen in American culture over the past year, is it truly inhuman to be driven by those kind of base needs? Isn’t that selfishness how we have arrived at this moment?

TS: Yeah, that’s totally it. If Polly’s base is just pure hunger and need for sustenance or fuel, you can say she’s above morality. She’s simply surviving. But once you see her do something beyond that, we need to start questioning “goodness,” or humanity, or that basic instinct.

I do think it touches on larger cultural questions, like are we responsible for people who have less than us, or is it just about survival? It’s totally in the air right now, of course, because we live in the most prosperous country in the world, yet we still have ailing people all over that we refuse to help for a variety of reasons.

Yes, the book is still about a lady with an invisible spider friend on the surface, but we definitely hope it makes you ask some questions. To me, that’s what good horror does. It elicits an emotional response from you on a very basic level because you’re afraid, but it should also make you think. 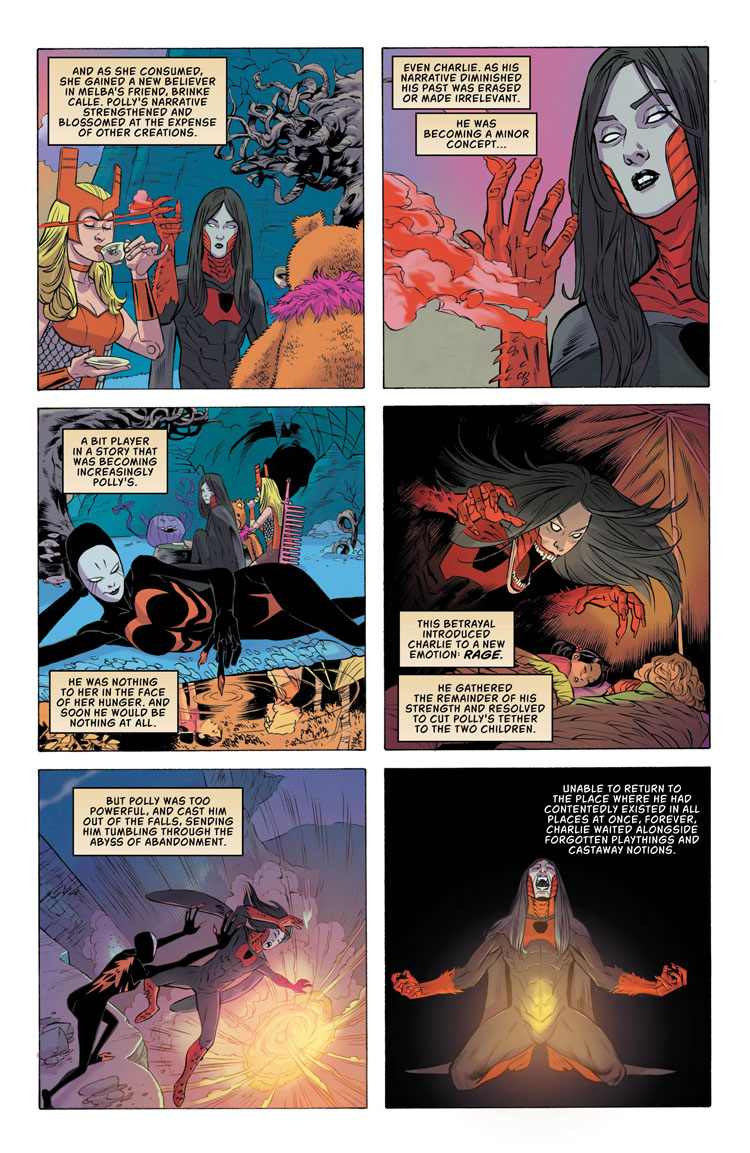 TS: That definitely comes into play. In issues #3, #4, and #5, you definitely see how far Virgil will go. If he factually believes that these things exist, why doesn’t that allow him to see them? That’s definitely a question we’ll play with. And he goes pretty far. We saw him take PCP in this issue, hoping it would make him hallucinate and get to see things.

MS: How are what Polly and Charlie as “IMP”s different than just being an imaginary friend? Do they grow out of already built fantasy life, or…?

TS: The mythology of the series — which we get into in a cool, pseudo-scientific, comic booky way in issue #3 — basically says that these entities are from a plane higher than us. They can’t interact with us directly because of the geometry and all of that, but if they bond with a notion or idea, there’s a intermediary space between our 3D world and theirs that they can inhabit.

That’s story or imagination, a higher reality that human beings seem to be able to attain when they’re imagining things.

That becomes the medium through which these creatures can communicate with us. And if they drop down in, then they find themselves with a whole new set of rules they have to follow. But it’s rewarding. They can gain power.

In issue #3 we really get into it, because the way Charlie perceives the world you and I live in is very different than how Polly does. Charlie hates being here. It’s like if you or I stepped down to live in the world of a sheet of paper. To him, he’s losing all these angles. And in his world, truth is absolute. There is no such thing as a lie, because you can see every angle of everything at the same time. He doesn’t thrive here at all.

But Polly loves it. She’s really good at being a liar and a cheater. She gets high on the fear. She’s hungry. All these things factor into the differences between these two beings who have sort of silly, childish names, that are really complex personality traits. 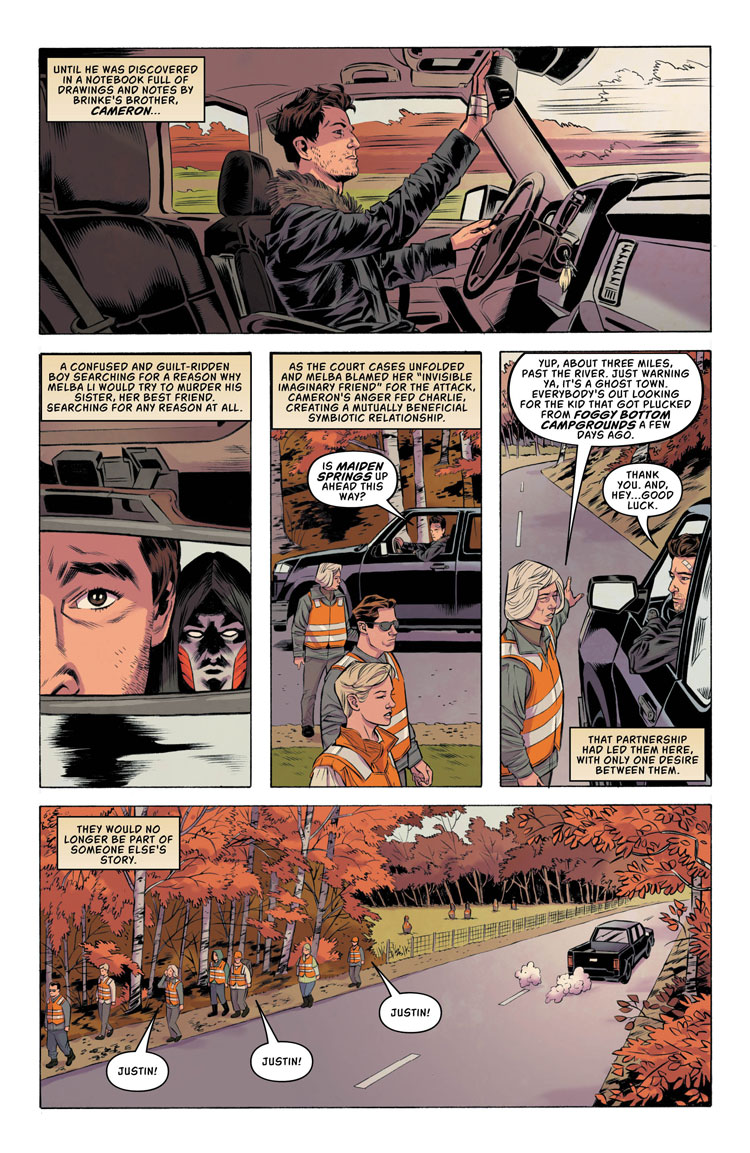 MS: This seems like such an incredible opportunity for an artist like Stephen Molinar to jump into these characters and that kind of perspective. How has it been working together and what’s been blowing your mind on his work?

TS: The reason I wanted to work with Stephen is that he can do this really perfect photographic-style work. He was doing all this movie stuff, drawing Star Trek characters and Chris Pine. And it’s absolutely, scientifically perfect when he does it.

I knew intuitively that if I unleashed him on something where he couldn’t draw photographically and had to come up with new stuff, he would be so excited and relieved and he’d just go crazy. And I think I was 100% right. In every issue of this book, you can see him get more excited and more comfortable.

In issue #3 and #4, there’s a fight scene between Charlie and Polly. And because they’re on a plane different than us, they can fight through walls and physical objects don’t really get in the way. Stephen is just doing some amazing stuff. It’s like what the artist inside him was waiting for. 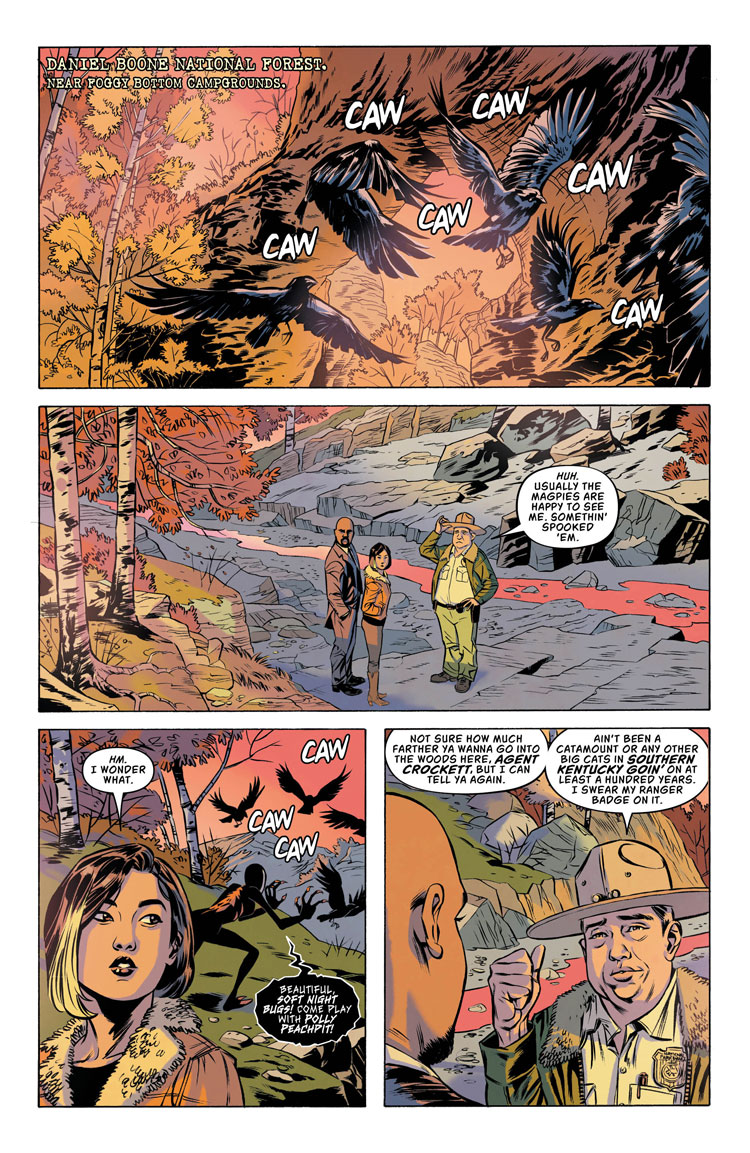 MS: I just want to wrap up by asking about the very end of issue #2. That cat.

TS: That is the Fraidy Cat. She is the bad guy for the arc.

The larger premise for the book as a whole is that these agents have to deal with these monsters — these imaginary fiends. Well, this is their first case. I felt like I had to go big. I had to go really weird and really gross. And the cat is totally that.

TS: [laughs] The next couple of issues you get to see that this entire town has an imaginary friend, what they’re covering up, and why. There’s all these dark themes, and big ideas, and personal moments. And then there’s going to be massive monster fights.

I want this book to be all the emotional moments of an indie film, but with Godzilla-King Kong fight scenes. That’s what you get with the cat.

Tim Seeley and Stephen Molinar’s Imaginary Fiends #3, from the Vertigo imprint at DC Comics, is in stores tomorrow.