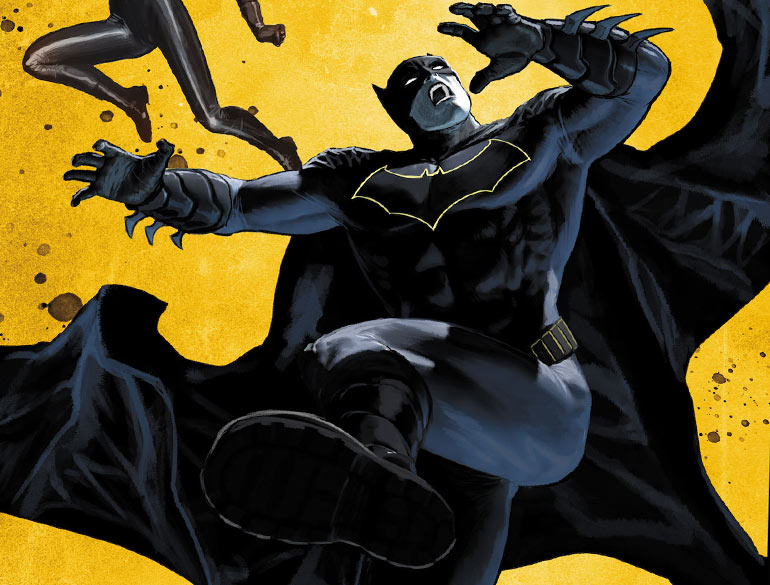 In any given extended run, a savvy reader can tell when everything really starts to click for a creative team. It’s usually just a feeling, that everything just feels right. But when said team begins to contribute major additions to a character’s canon that feel like they’ve been there all along, that’s when you know it’s clicking for everyone — creators, editors, on down to the fans.

We’re in that moment with Batman, as writer Tom King has infused the core DCU title with his own sensibility and produced a major revelation along the way. King was kind enough to sit down with Comicosity for a spoiler-filled interview on just what everything in issue #12 means for the character of Batman, and where we go from here. 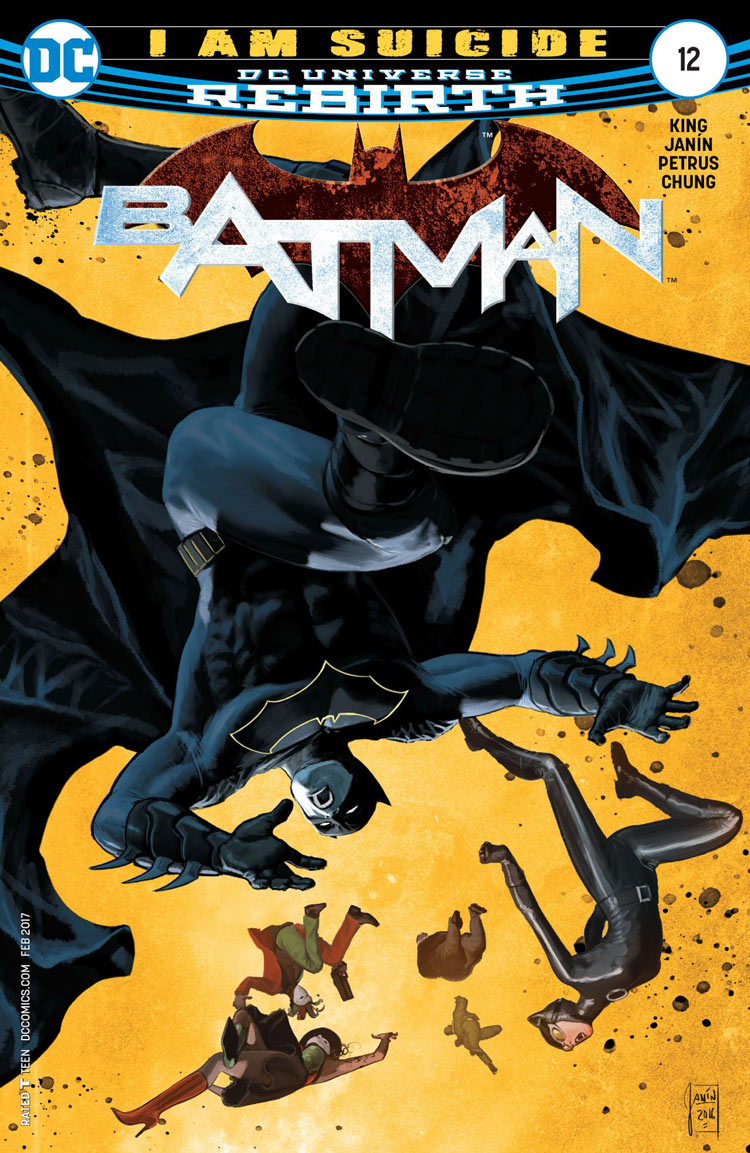 Matt Santori: Let’s start off on a slightly lighter note. Catwoman doesn’t have a book in the current Rebirth slate, so Batman is really her spotlight at the moment. What are your thoughts about her overall as an individual and in terms of her relationship with the Batman?

Tom King: I’m a huge Catwoman fan. I had planned on using her in Batman #1, but we just didn’t have room. In fact, if you look at the alternative covers, 80% of them have Catwoman on them because I wanted her involved in the story. You’ve got to know that I was a big fan of her growing up.

I love that she has almost the same origin as Batman, that idea of an orphan left alone. Instead of being a rich kid who got helped by Alfred, she had to build herself back up as a poor kid in the slums. She had to rely on her will and her wit to survive from an early age. And yet, she came to the same spot as Batman, just from a different angle.

She’s just a very cool character. Smart and sexy, and one of the best fighters in the DCU. How can you not have her in your book?

And then I wrote her, and every Catwoman fan in the world hated me! [laughs]

And rightly so. Everyone was saying, “She killed 237 people. That’s not who Catwoman is. It’s completely out of character. You’re writing her wrong.”

Issue #12 is all about how Batman agrees with all of those people. Everyone who is complaining is 100% right. It wasn’t in her character. That’s not something she’d normally do. It doesn’t make sense for her. What the fans are seeing is what Batman’s seeing. Their frustration is his frustration.

Hopefully, when they read the issue, the Catwoman fans will be able to see themselves in that and start to realize that, especially when Batman says, “You say you killed 237 people. I say you’re a fraud.”

He’s all the Catwoman fans out there that say, “That’s not her. That’s not you.” 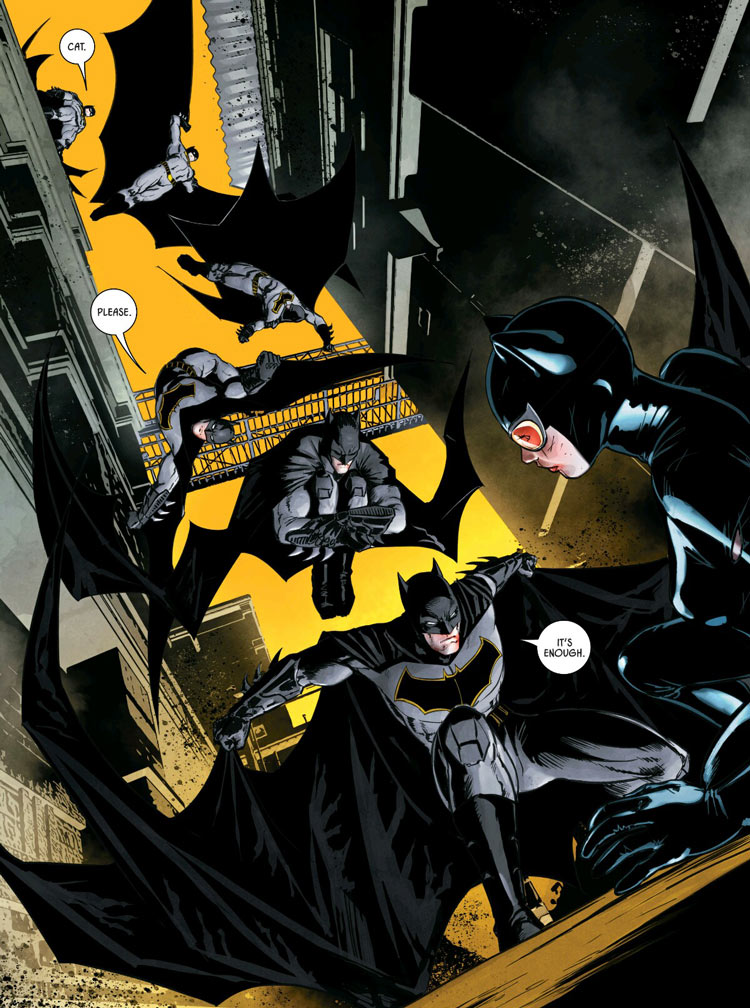 MS: It’s interesting, because I found myself vacillating wildly from “Oh it must be a frame.” to “Wow. She really did do that.” to now, “Hmmm. Maybe she didn’t.” It’s a curious roller coaster.

MS: So, how do you see Selina and Bruce’s relationship?

TK: This is why I always have them call each other “Cat” and “Bat.” They’re the only two people who see the other one for who they truly are.

And he sees the same in her. He sees that she’s chosen not to be who she was born to be. They both realize that their original selves were the masks. The true self they were reborn into — the Cat and the Bat — is who they really are. 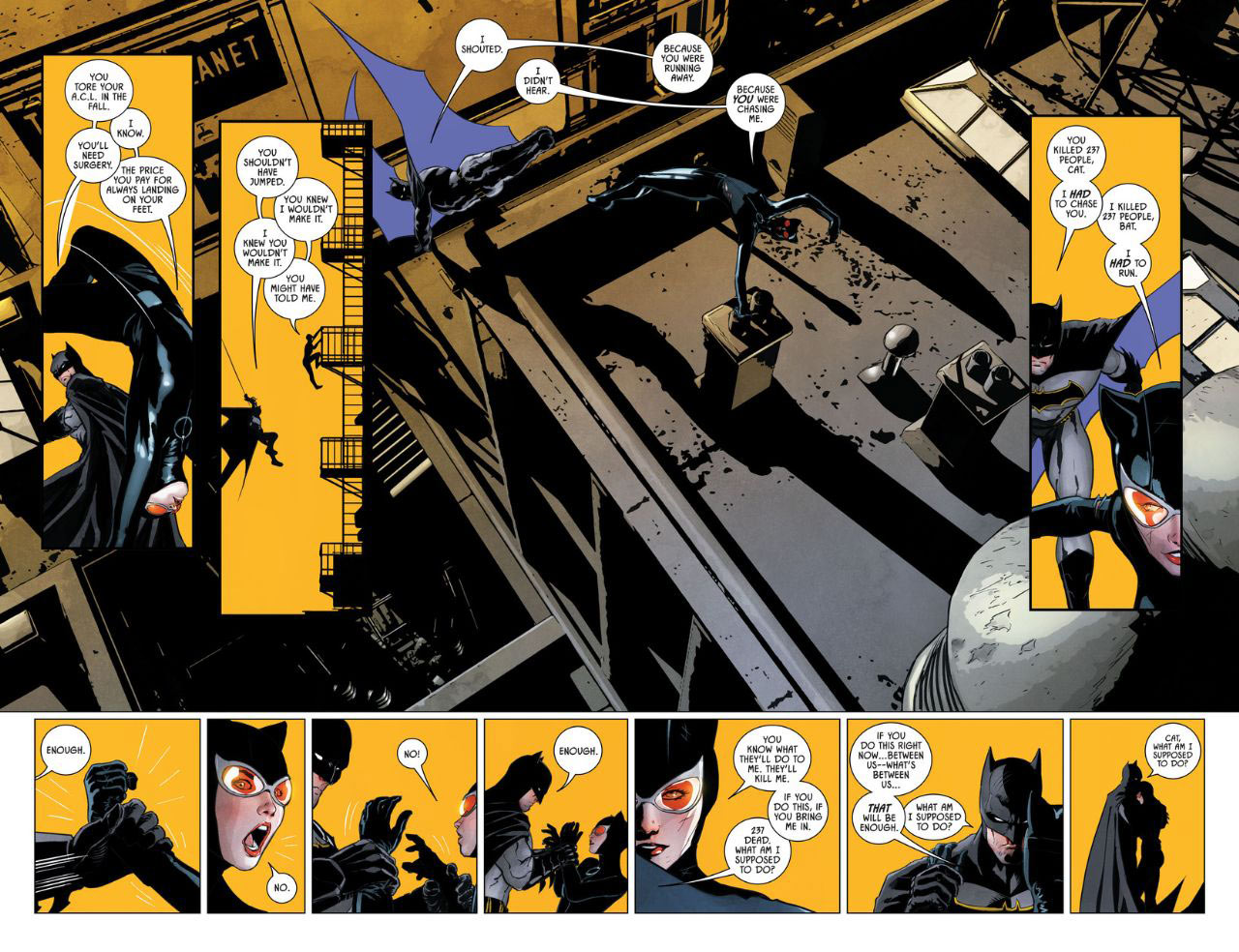 That’s really what makes their relationship unique and uniquely suited to be with each other. If you go back to Steve Englehart’s run with Silver St. Cloud, she couldn’t see Batman. All Silver could see was Bruce Wayne.

That’s what being a soulmate is about. Everything that you’re trying to hide from everyone else, they see that. They say, “I see all of that. I see what you are and I love you.” That’s true love, man. That’s love forever.

MS: In shifting over to the bombshell for issue #12, you’re inserting something into canon with young Bruce Wayne’s suicide attempt that has never been broached before. Can you share a little about the prospect of adding to continuity in this way, and then I want to dig into the thing itself.

TK: Sure! To me, it wasn’t a big addition. It was just literalizing something that a lot of writers already believe about Batman.

When I first came up with the idea, I called Scott Snyder and thought he was going to yell at me. I told him that I wanted to do this thing where, when Batman made his vow, he came to that moment to commit suicide, and he thinks of himself now as having killed off Bruce Wayne to become Batman.

And Scott was like, “Oh yeah. That’s my opinion on Batman, too.” So, to me, it wasn’t a radical departure. It was more of a clarification. 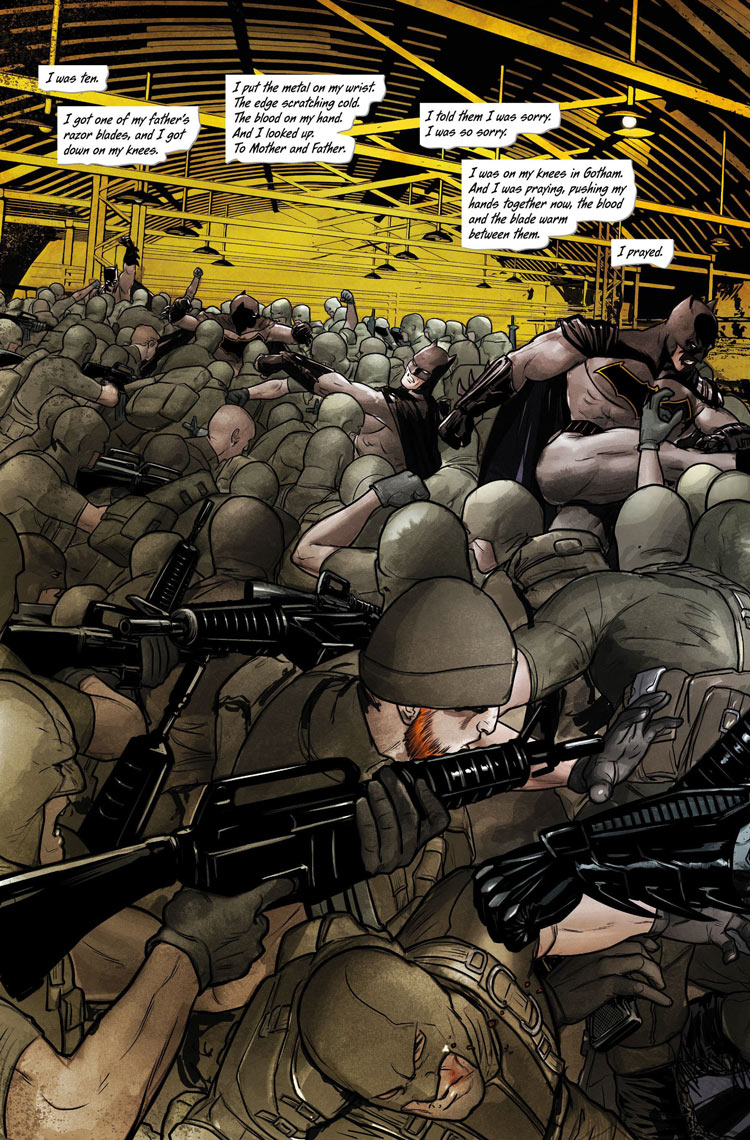 It’s always been in my head, honestly, that Batman was giving up life for this vow. He’s giving up everything and anything to complete this one vow. So it makes sense that he would do that at a point where he was willing to end his own life.

MS: The portrayal of suicide, or attempted suicide, is so tied up in portrayals of mental health and calls back for me a lot of what I see in queer kids — especially at the young age Bruce is describing. Can you talk a bit about your thought process behind integrating the suicide into Bruce’s childhood and the responsibility in portraying that mental health aspect?

TK: When you write, you’re always ultimately writing about yourself, right? I didn’t come at it from growing up queer, but I was one of those kids who was a nerd. When I was Bruce’s age that Batman describes, I felt like I was utterly alone in the world. Nobody liked me. And I felt like there was just something wrong with me, that I didn’t fit into whatever this thing was. I couldn’t be a jock. I couldn’t be a cool kid. I couldn’t be a druggie. It just didn’t work.

Again, like Batman, all I could think of at that age was “I am worthless. I am in fucking pain. Why am I even here? Maybe if I was gone, people would appreciate me for what I was.” But I remember having the same thought Batman has, which is “If I’m going to throw away my life, I may as well just say, fuck it, and make my life worth something.”

And that really eventually got me out of it. I know it’s kind of a stupid thought to have, but that was what got me out of the deepest, darkest points. If I really thought I was worthless to myself, maybe I could just be worth something to someone else. Because that’s an improvement over just being gone.

Everyone makes their own vow. So, I wrote that one into Batman. 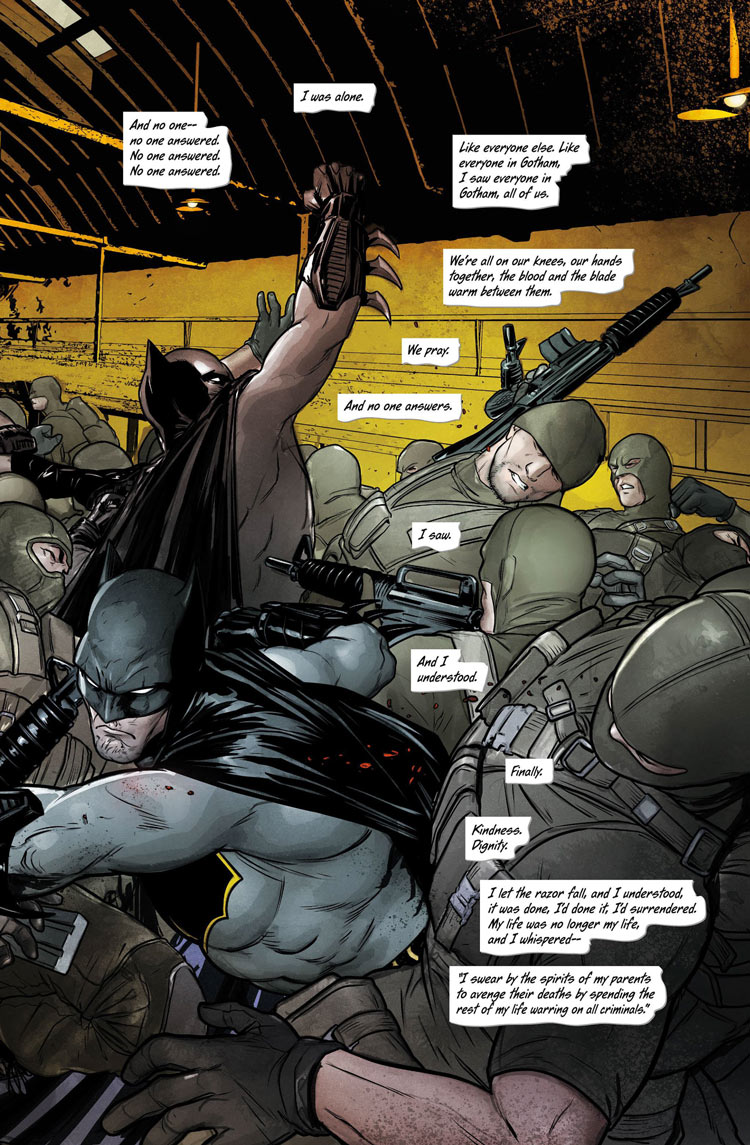 MS: It’s a interesting expansion of that vow. As readers, we tend to gloss over that early moment and focus on that adult moment of “And I shall become a bat.” But we’re talking about a decision he made much, much earlier.

TK: Oh yeah. To me, that’s the key moment. That moment with the bat? That happens halfway through Year One. He’s already engaged in the mission at that point.

The key moment in his whole life for me is him getting down on his knees and making that vow. And then changing his life. That’s when he goes from being Bruce Wayne to being Batman.

The Bat is a disguise, right? But the identity changed at that moment. 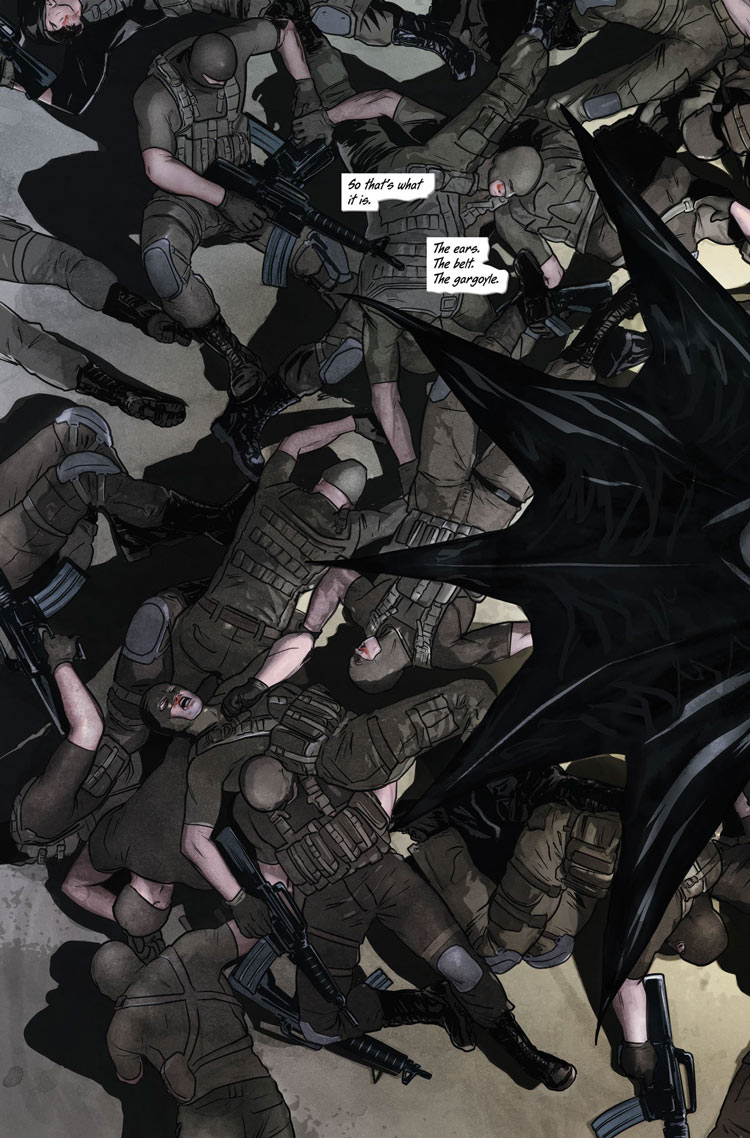 MS: In working with Mikel Janin on these issues, you’re telling the story through text — in this case, a second letter from Bruce to Selina — while Mikel is almost telling a different story. Tell me about how you coordinated that with him and what kind of work you think he’s doing to fill out the pathos of the story.

TK: When I wrote this issue, it was this really simple concept: something like, Batman fights his way through the prison. And you know, I’ve been working with Mikel for three years on Grayson before this. I always try to give him these horizontal pages. I think very vertically, but he always thinks horizontally. I mean, you saw that brilliant pipe sequence, right?

I feel like in some ways, I’m holding Mikel back. I thought, what if I gave him a whole issue to do horizontally and just let him do that? So, I didn’t even write a scenario for what happens on each page. I figured, I’d let him do it and if you look at the credits, we changed them for this issue. We’re both listed as “storytellers,” not “writer” and “artist,” because I wasn’t giving him descriptions for Panel 1, Page 1, etc. We shared story credit for this one.

But I knew the key to the issue from a mathematical point of view is that if I didn’t get the reader to slow down their eye, they’re not going to notice Mikel’s art. Sort of like the famous “Death of Superman” issue with the splash pages. I think often, you don’t even notice the beauty on the page as you flip past it.

The words came second this time, and I really wanted to do Batman’s response to Catwoman’s letter in issue #10. Plus, my editor is always telling me to get more inside Batman’s head. Hence, the letter.

So, for the first time since I started writing the book, we get directly into Batman’s thoughts. This is the first inner monologue we have in 12 issues. 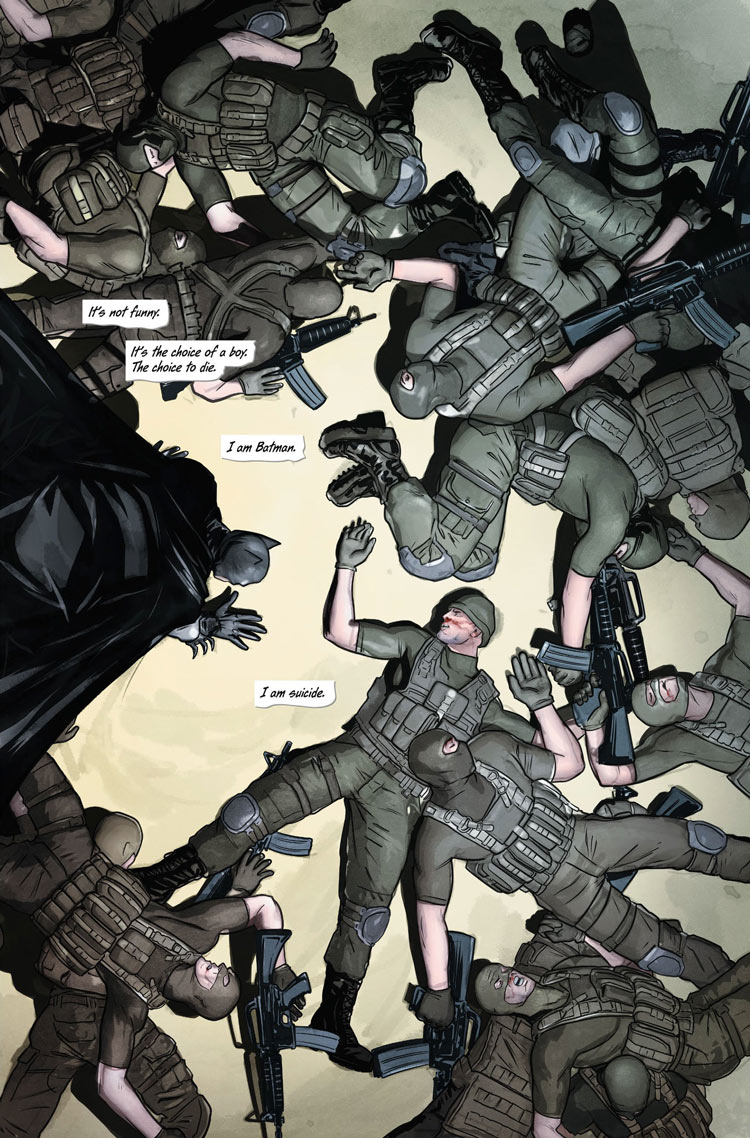 MS: One last note: a big “thank you” to you for bringing Bronze Tiger into the mix. I’m a big fan of the character and it was nice to see him as more than just a two-bit villain. He’s Batman’s friend!

TK: I’ve gotten a lot of criticism about how lame Bronze Tiger is, but man, he’s only been in four panels and in one of them, he beat up Batman! He’s a damn good fighter.

I wish I had had more space for him upfront. There are so many characters and only 20 pages per issue. But Bronze Tiger does continue on in the book through the next storyline, “I Am Bane.”

“I Am Suicide” continues in just two weeks with Batman #13, the conclusion of the arc by writer Tom King and artist Mikel Janin.