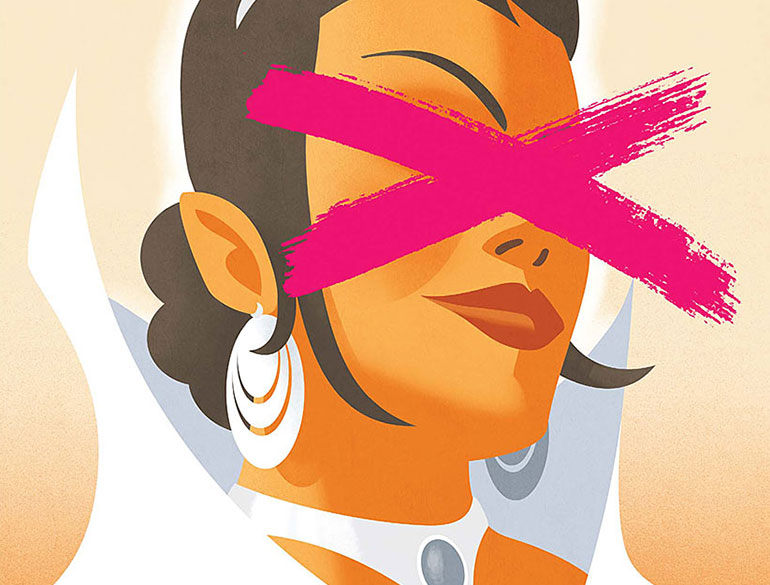 One of the biggest surprises out of the DCYou launches this June was Omega Men, a book with a long history in the DC Universe, but little use in recent years. Enter writer Tom King and DC’s once-upon-a-time space opera becomes a political thriller like none other. King sat down with Comicosity to share SPOILERIFIC details about issue #3, the arrival of leading lady Kalista, and why Kyle Rayner’s role is so important to the book. 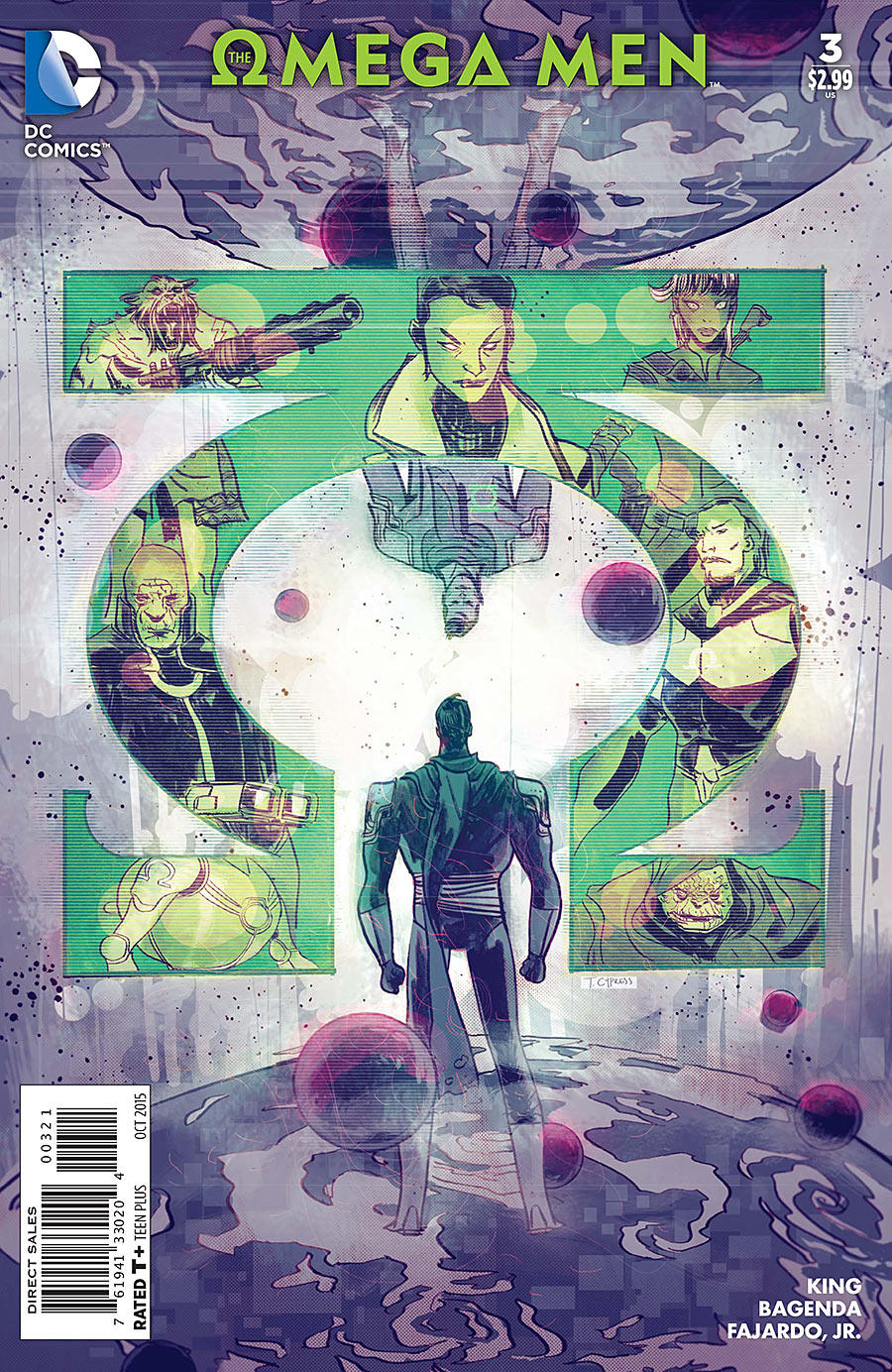 Matt Santori: Rather than start off asking about your history with the characters, Tom, I’d rather take a gander at your personal background and how you think it informs the political angle of Omega Men.

Tom King: Absolutely. If people don’t know, I was in the CIA for a bunch of years and did counter-terrorism work. A lot of it overseas. I lived in an environment where religious cultures were clashing with the highest of stakes. In an environment where the good guys and bad guys seemed clear at first, and then as you went along, it wasn’t clear at all. Alliances kept shifting. And the enemy of my enemy became our friend. And then that enemy became our enemy. It got more and more tangled.

MSG: There’s been this shift — or maybe recognition — over the past few years in how we look at these types of stories. Is it the good fight? Are they rebels or are they terrorists? Like, do we think of Star Wars as about being about terrorists?

TK: We all remember watching Clerks for the first time and hearing the discussion about the workers on the Death Star. What happened to those workers? What does it mean to be a Rebel and kill people? I think Star Wars has gone there, but it lightly glides over it.

Omega Men is a series that hopefully won’t lightly glide over it. 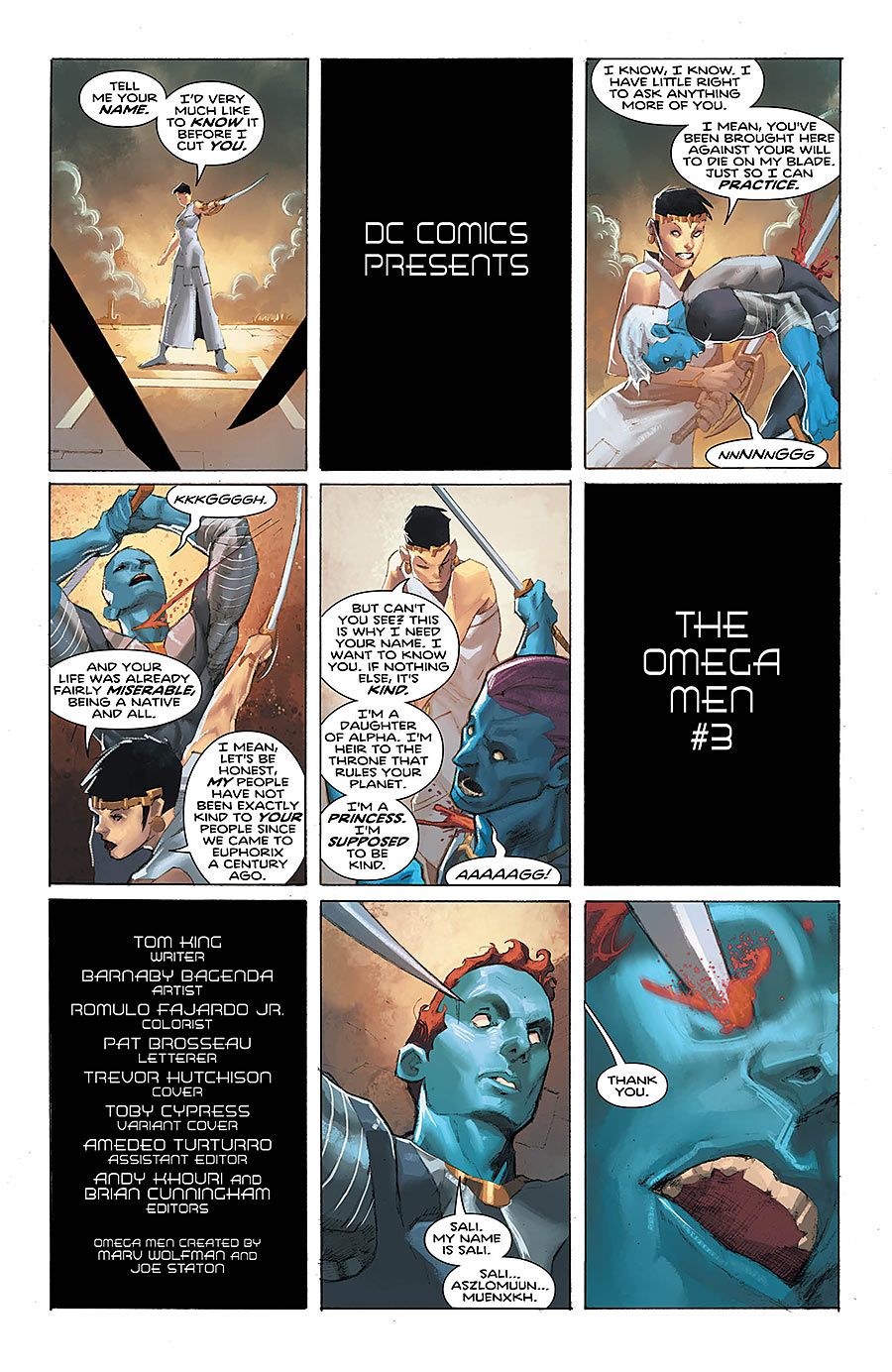 That can become terrorism or that can become something noble. It can fall either way, or it can live on the blade, so to speak. And that’s what the series is about.

MSG: So, issue #3 is all about Kalista, and how you’re bringing her into the series today is very interesting. Share some of your thoughts on that, if you will.

TK: Omega Men is very tightly plotted for the first 12 issues, so as soon as I wrote the 8-page preview story, I knew that issue #3 would look like this. We knew Kalista would come in here.

Kalista was, if you look back at the old series, the heart of the series. So I wanted to do the same here, but give her a big grand entrance and make her character more complicated than the other characters. I also wanted to play with this concept of the “princess” and making her as badass a princess as I possibly can.

Mostly because, I have a 5 year old daughter who is obsessed with princesses. I keep saying, you should love bad-ass heroines! And she’s like, no. [laughs]

To my mind, princesses should have swords and be stabbing people. I figured, I’m a writer! I can give my princess a bad-ass sword.

So, yes! Kalista is the second biggest character in the book — next to Kyle — and issue #3 is her big introduction. 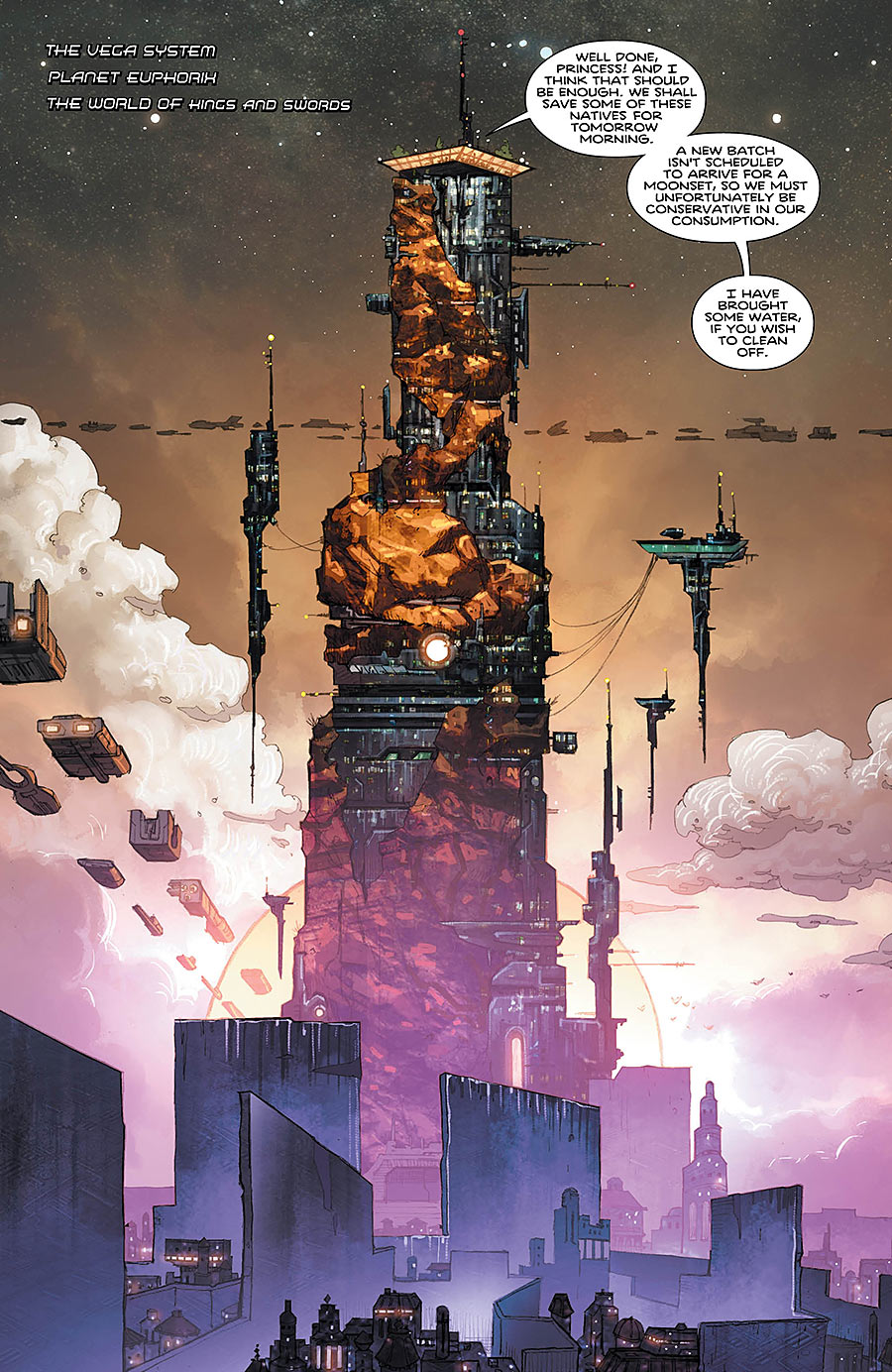 MSG: Immediately, we walk into Kalista slaughtering slaves with that sword. So, in terms of how that plays against her role in orchestrating the revolution against the empire, that’s an interesting grey position to put the character in.

TK: Yeah. So, to kind of set it up: the series is about the Omega (rebels) and the Alpha (empire). The Alpha empire owns the Omega system the way the Britain empire owned the Indian colonies, or the way America once owned Iraq.

Kalista is sort of halfway between those worlds. She’s from a culture in the Alpha system that was vacated because of their religion and placed in charge of this world in the Omega system. If they can keep the peace on this planet, then the empire won’t bother them. So, to keep the peace, they slaughtered the people.

I took that bit from Spartan culture that Frank Miller writes so wonderfully about. They had a slave culture and they took two weeks of vacation every year to have their children kill the slaves — all just to let them know how much better Spartans were than their slaves. And also to make sure the slaves, who outnumber the Spartans, understand their place in the world.

Kalista has grown up with this, and since she was a child, she was told to kill slaves. That’s what they’re for. She’s also been told that the Alpha empire is behind it, that if we don’t do it, the Alpha empire will be mad at us. Those two factors result in this horrible hatred inside of her. And you’ll see what that’s done to her soul over the years, having committed horrible, terrible acts in the name of this empire. What that’s going to make her do to that empire is the story we have. 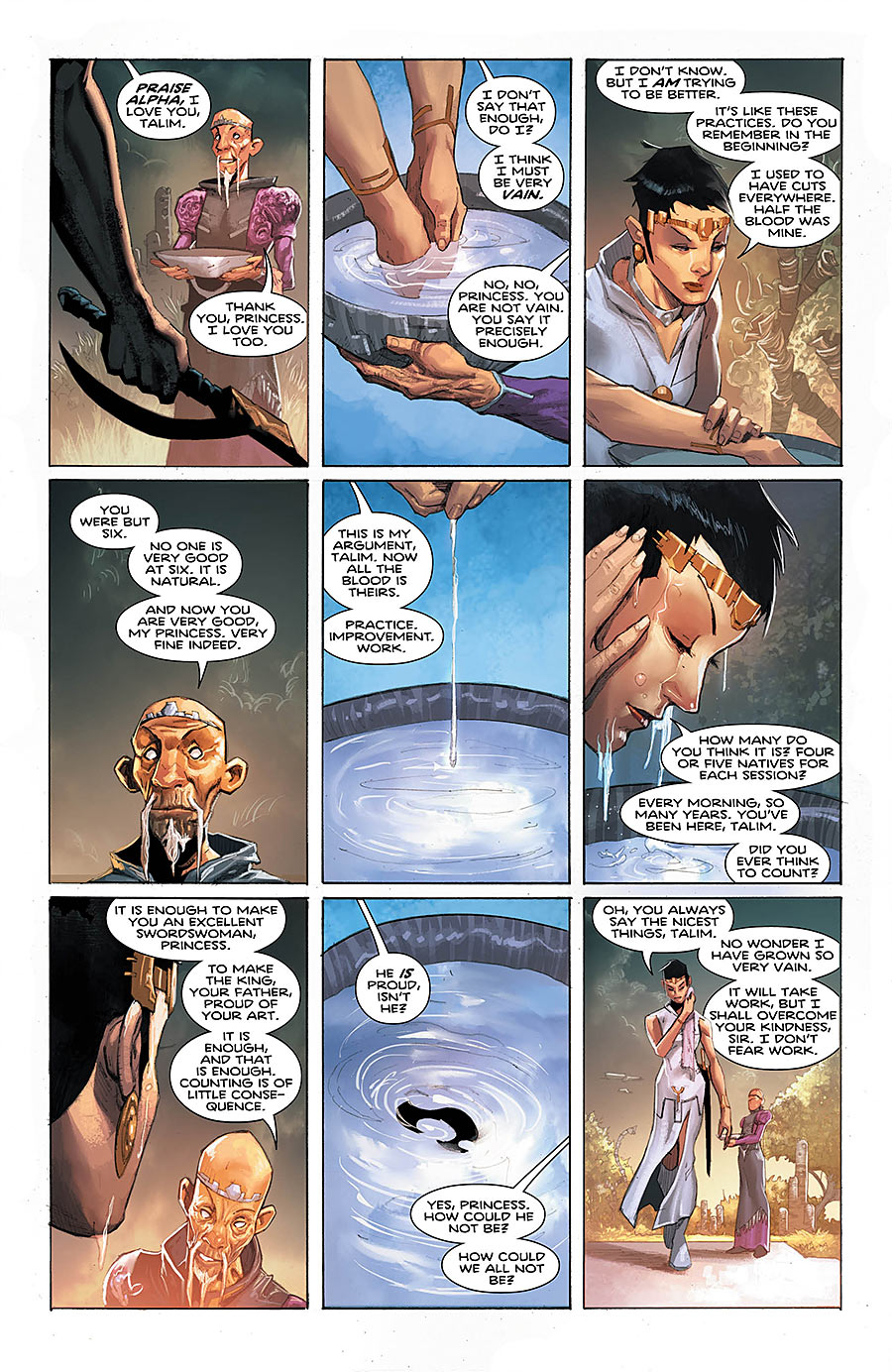 MSG: On the other side of that coin, of course, is Primus, who you made clear from the start is a pacifist. Can you tell me a little about that tension in supporting Kalista’s mission?

TK: Primus is sort of the Gandhi figure or Martin Luther King Jr. of this world. He used to preach non-violence. It’s what he’s known and famous for. His attitude had always been, we don’t resist the way the Omega Men do. “I’m not an Omega Man.”

But something to do with Kalista changed him and turned him into this rebel. The relationship with Kalista developed with that revelation. As we move forward, the mystery of what turned Primus from someone who preached that the only way to defeat the empire is to lay down arms and sit down, to “We need to kill people.” is one of the central mysteries.

MSG: We’ve seen that tension already between Primus and Kyle. You’ve brought in Kyle Rayner as your new “Green Man” here. As the most recognizable character in the book, why was Kyle the character you gravitated toward?

TK: Well, the easy answer is he was available. [laughs] The more complicated answer is he was the White Lantern. He’s the guy who is like, this is good and that’s bad. And yet, this is a world of grey. It’s just a wonderful metaphor.

Kyle obviously represents the reader in the book. This is a complicated world. There’s like six different planets and all these different cultures, each with its own history. We needed a character in there that’s like, “What the f— is going on?!?!” Because I know that I’m throwing a lot of readers into the deep end here, and that going in with me is a leap of faith. I can’t say how much I appreciate that.

I really like Kyle. I want to give him a great adventure. He’s a character of color, and everybody forgets that. I want to put him forward and give him an epic. 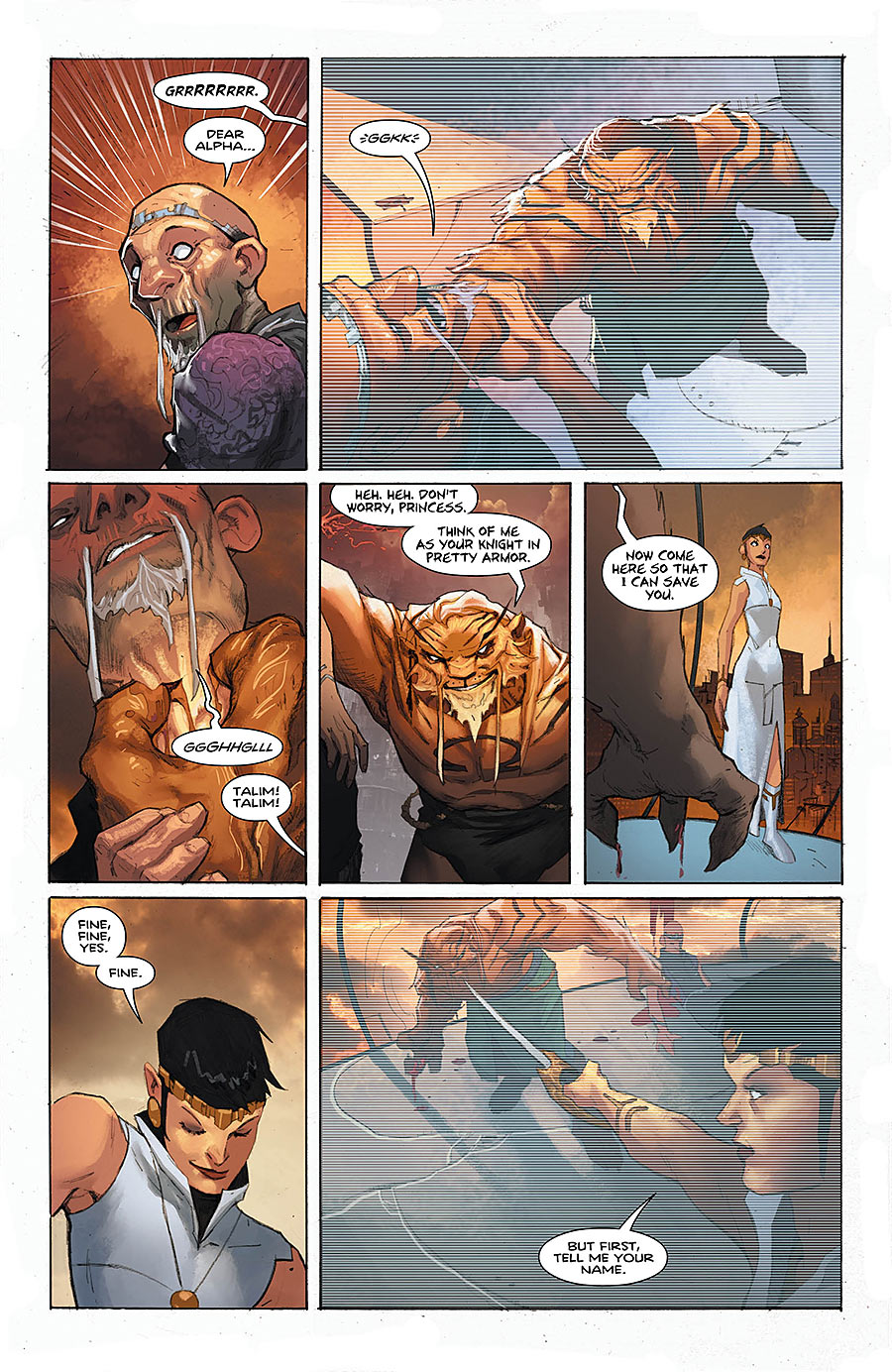 MSG: How have you found working with Barnaby Bagenda on the series?

TK: Barnaby is a joy. He’s brand new to this! He’s done just a few little things, so I didn’t expect him to be as fantastically good as he is, and he’s even better than that!

First of all, he’s insanely patient. There’s so much planning that goes into these issues in terms of doing the layouts and the backgrounds. All these 9 panel grids! If I gave those to another artist, there might be an assassin order and I’d have to go into hiding. But Barnaby is very patient with my vision of this. And he offers his own vision as well, being from Indonesia and a little closer to some of this stuff than we are in America. I think he’s doing great stuff.

I also need to add that Barnaby is just doing the pencils. There’s no ink on this book. The colorist Romulo Fajardo, who’s out of Spain, is painting it. So, he also needs to get credit for how beautiful the book is.

MSG: Awesome! Any other thoughts on the series so far you want to share with fans into it or haven’t tried Omega Men yet?

TK: I’m not going to say what it is, but there is a complicated background trick I’m trying to pull off that will be clear after 12 issues. I’m curious to see if anyone is starting to pick up on it after #3.

Tom King’s Omega Men #3 is in stores from DC Comics today! Tom is also the co-writer on Grayson monthly with writer Tim Seeley.