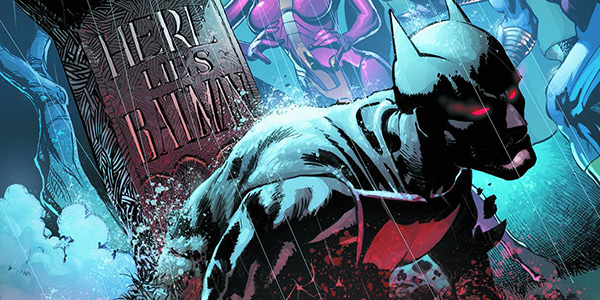 SPOILERS AHOY. It’s been months and months in the making, but the identity of the new Earth 2 Batman has been revealed! In what may have been the worst kept secret on the internet since the days of Armageddon 2001, the real surprise was, in fact, the story behind the name — leaving readers duly impressed and ready for more! Writer Tom Taylor set aside some time this week to talk about what led to this particular version of Thomas Wayne, Sr., how the other new characters he’s introduced in recent months come to play, and what the future may bring for the world of Earth 2.

Matt Santori: Tom, now that you’ve settled into Earth 2 and made a bit of a mark, how are you finding the experience of working with the cast of characters?

Tom Taylor: It’s wonderful! I like the people that we’ve created — all the new ones coming in. I like the established cast. The only thing I wish we had was more time for all of them. I wish we had more pages for all the characters. 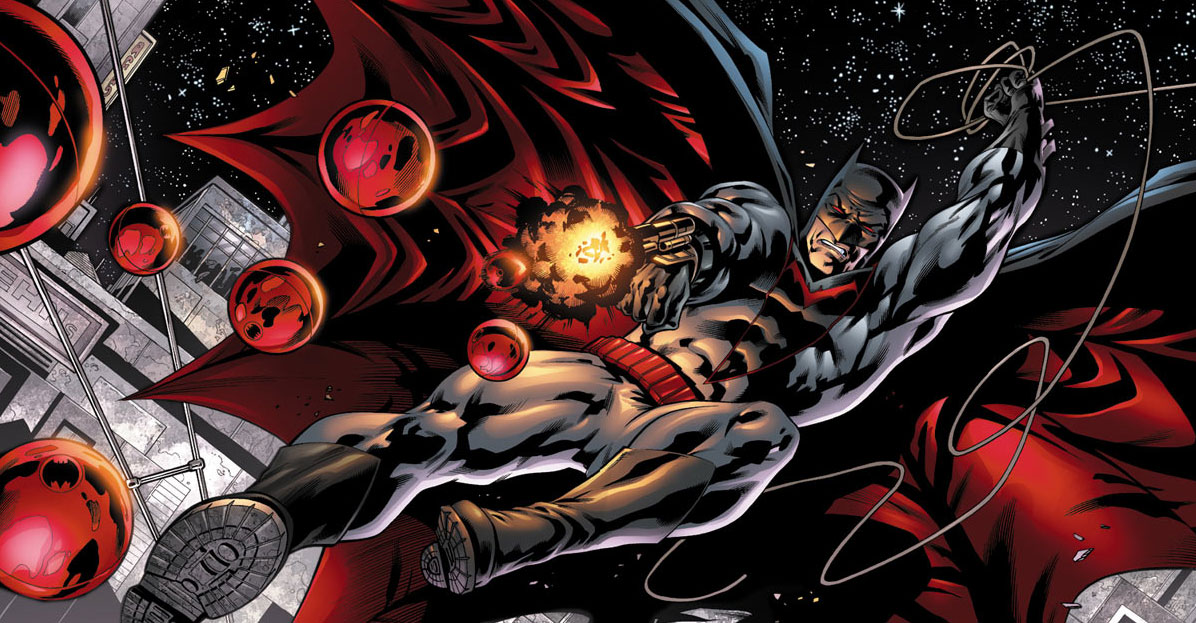 MSG: In last week’s Earth 2 Annual, fans were finally treated to the origin story of the new Batman. How much of this version of his history did you (and Nicola) develop coming on the book, and what were your inspirations?

TT: The only thing that I was told coming on to the book is that it was Thomas Wayne and aside from that, it was pretty much up to me what his origin was. It was a hell of a thrill, I have to say. It’s the kind of stuff you dream about as a kid. I probably made an origin for Batman when I was about seven. I don’t know what that was — he probably landed on a giant bat or something, as I imagined it! 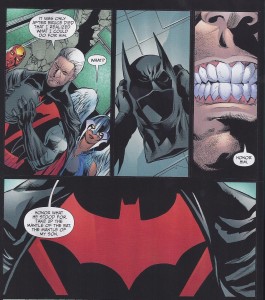 There weren’t any real inspirations really. We didn’t take the story from anywhere else. I sat down and I typed like I do every single day. I was talking to my editor on Earth 2, Mike Cotton, and he mentioned that it might be interesting if he was a criminal and that sparked something in me that I thought, “Well, how would that happen? Why would he be a criminal?” And it got me thinking maybe that’s the reason why he was killed in the first place. And the rest is now an origin.

MSG: The reappearance of Thomas Wayne certainly casts a long shadow retroactively on the history of Earth 2’s original Batman and on the Huntress’s understanding of her legacy. How will this revelation affect Thomas’ future plans, not to mention those working with him?

TT: Well, I think you’ve hit on it. There are these people around him that this is bound to affect. At this stage, I don’t think he knows that his granddaughter is alive. I don’t think his granddaughter knows anything about him. So, where does that lead? It has this massive snowball effect. Who knows where it could end? He could even meet his son on the other Earth.

MSG: Introducing Miraclo and the concept of the Earth 2 Hourman in this way seems to push the possibility of Rex Tyler to the side. With all of your character introductions, is there still a focus on revitalizing classic Golden Age heroes, or has the presumption for new characters shifted to a more multiversal version of Earth Prime?

TT: It’s not one or the other. It’s very much both. It’s still going to be Golden Age characters showing up. There will still be elements of that showing up all over the place. And we have more characters that will be showing up. 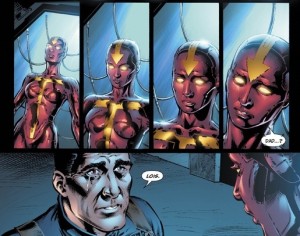 So, it’s a mixture of the Golden Age and Today’s Age, essentially.

MSG: So, after Batman, one of the most remarkably surprising additions to the cast is Lois Lane. What can you tell me about your decision to resurrect her in the form of Red Tornado, and how do you think she will represent both sides of the character’s history?

TT: For me, bringing Lois in was quite a personal thing, because having to do such horrible, horrible things to her in Injustice, the first thing I asked when I got on the book was if I could bring back Lois. Then it was just a matter of working out exactly how. And I think too with an evil Superman on that world, you need Lois there. It instantly makes people think they have to come together. And she offers something that no one else does, and that’s hope. When there’s Lois, you have that possibility that she can turn this evil man around. And that’s something that we’ll be exploring.

So, to me, bringing back Lois was incredibly important, and the other thing was bringing in Val, who first appeared in the last issue. 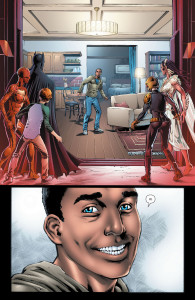 MSG: Speaking of Val, fans have begun to speculate this is the first appearance of Earth 2’s next Superman. What went into your and Nicola’s thought process when designing his look and personality?

TT: We wanted him to young, vulnerable, and new. And you’re going to be seeing a lot more of him in #20, and get an inkling of his character — quite a lot more. I think he’s going to be a very important character for the whole DCU.

MSG: Jimmy Olsen was a real surprise as well, as he is a character rarely associated with the Golden Age of comics, although he had his original appearance way back in 1941. Why choose Jimmy as one of the uncovered tube heroes and where did the idea of his powers come from for you?

TT: I was sort of looking at what we were making, and first of all, I thought we needed youth. All the heroes were young, but there were no wards. There were no sidekicks or Robin, and I felt like we needed a young voice in the book. And especially someone who wasn’t afraid to speak truth to power like Jimmy does. He has no filter between his brain and his mouth, which is great! And I love characters like that. We needed a sense of humor in the book and Jimmy’s got some parts coming up that are just hilarious. 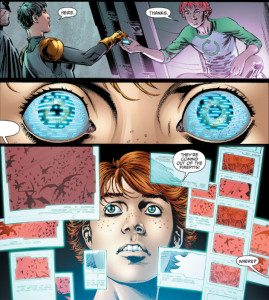 And also, having a young character really gives us that ability for him to essentially be “Accountable”. Having him as this activist brings him not only into being something we understand in our world, but he has this power that’s really quite useful. He’s going to be able to contact people, and reach out into the digital world and do things that Batman can’t.

MSG: The presence of Aquawoman is, of course, the big wow moment in both #18 and #19, as she shows off quite a considerable power set. How did you begin to develop her backstory in your mind, and how much of Aquaman’s history or personality did you take in consideration for his Earth 2 counterpart?

TT: None of Aquaman’s history at all. She’s something different. The only thing I really wanted with her was to be very powerful and very dangerous. There’s a reason why at one point the World Army thought she needed to be locked away. We’re going to be hinting at it later, but there was something of a reason for this.

In the DC Universe, you have an entire world underwater. And myself, I work on The Deep, which is my creator-owned book. So, I have quite a fascination with it already and took some of my cues from that. That’s why she looks the way she does. She sort of looks like she’s from the Philippines, because she’s based on the Bajau Laut people, who are people that essentially exist on the ocean — the only people who still do. So she looks the way she does because I wanted to tie her to the ocean in that way. 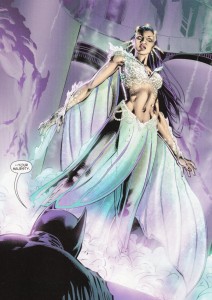 But you’re going to see that’s she’s BIG. Her command is big, and not only that, her presence is big. And you’ll see by about page 4 of #20 what’s she’s capable of.

MSG: Fans have speculated for nearly two years now on the evolution of the Justice Society, so I have to ask: is there a team in the future of Earth 2?

MSG: Thanks so much, Tom! Eager to see what happens next, as always!

Earth 2 #20, written by Tom Taylor and illustrated by special guest artist Barry Kitson, arrives in stores today from DC Comics! You also can check out another alternate world version of our classic DCU by Tom Taylor in the biweekly digital/monthly print series Injustice: Gods Among Us Year Two.