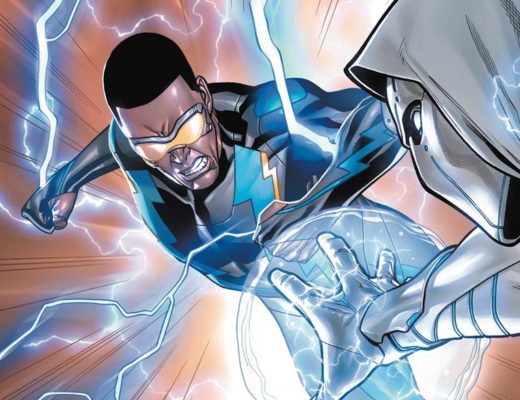 It’s just short of a year since Deathstroke #11 and just over two since Batman #44, and the emergent strain of a new kind of racial justice focused social realism at DC Comics is only getting brighter and bolder. This is the space we find Black Lightning: Cold Dead Hands, the third series penned by creator Tony Isabella about Jefferson Pierce, DC’s premier Black hero Black Lightning.

Isabella doesn’t just inhabit the space of Black pain and grief in the abstract, but specifically channels Tamir Rice’s 2014 death at the hands of police, the axis around which this entire mini-series is constructed. The writer sat down with me to get into the fine, specific detail that Cold Dead Hands exhibits, and the place from which it comes: Tony Isabella’s own community ties, very evident in contrast to more abstract and symbolic treatments of racial justice we’ve seen to date.

Véronique Emma Houxbois: What was the starting point for Cold Dead Hands?

While it’s covered a lot of ground, the third issue left me with the impression that the specific case of Tamir Rice’s shooting was acting as a kind of center of gravity for the mini-series.

Did your process begin there and spiral outwards, or was there a different starting point?

Tony Isabella: I have this emotional connection to the Cudell Recreation Center, which is where Tamir Rice was gunned down by an officer who, in my opinion, shouldn’t have been on the police force in the first place. Back in the 1970s, I used to attend a movie club hosted by Dave Massaro, an English teacher who taught friends of mine. He taught at West Tech in Cleveland. I went to St. Edward’s High School in the much more upscale Lakewood. But our common bonds were movies, science fiction and comic books. Don and Maggie Thompson used to attend the movie club meetings and we became fast friends.

Encouraged by the movie club and with Dave as my community sponsor, I founded the Graphic Arts Society for comic book fans. Now Cleveland was a very segregated city at the time. My first black friends were comic book fans I met at our club meetings. 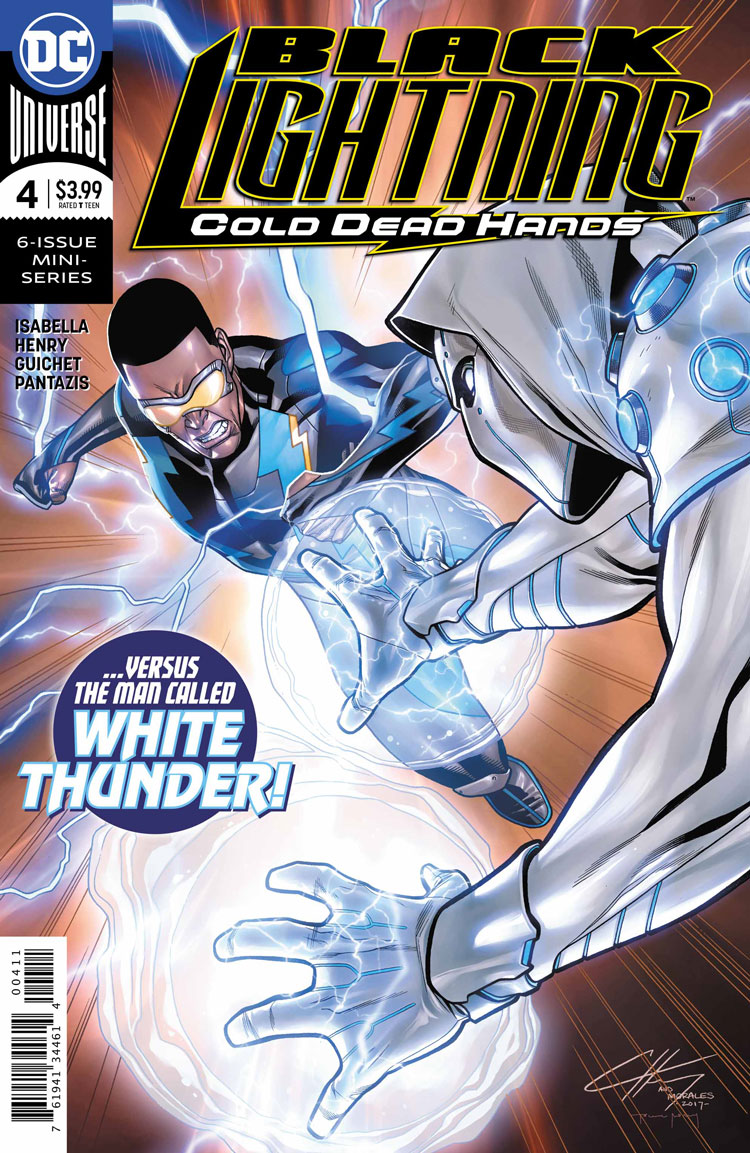 “Diversity” wasn’t really part of my vocabulary back then. But it struck me as fundamentally unfair there weren’t more black comics heroes. So, when I got into comics, thinking of my friends, I tried to work on and create characters of color. It was a starting point on the journey that leads me here today.

So, reading about the Tamir Rice killing, learning it happened in this place that held such happy and powerful memories for me. That hit me hard. The more I learned about the killing and the officers involved in it, the angrier I got. I’ve been vocal that neither of those men should have been in uniform. The driver had a history of police misconduct and broke protocol by pulling their car so close to Tamir. The shooter lied on his application forms and had been rejected by other police departments in the area. The Cleveland Police Department failed to do its due diligence…and then closed ranks around these two bad cops in the typical “them versus us” scenario we have seen over and over again.

But I can’t state Tamir’s killing was a starting point. I wanted to update Black Lightning for modern readers. I wanted to do things I had never done with the character before. I wanted to tell stories dealing with real-world issues within the context of a super hero universe. It occurred to me that, on a comic book Earth invaded by extraterrestrials every other month, the gun control/proliferation dynamic might be very different…and that some would try to make billions from the alien weapons left behind. 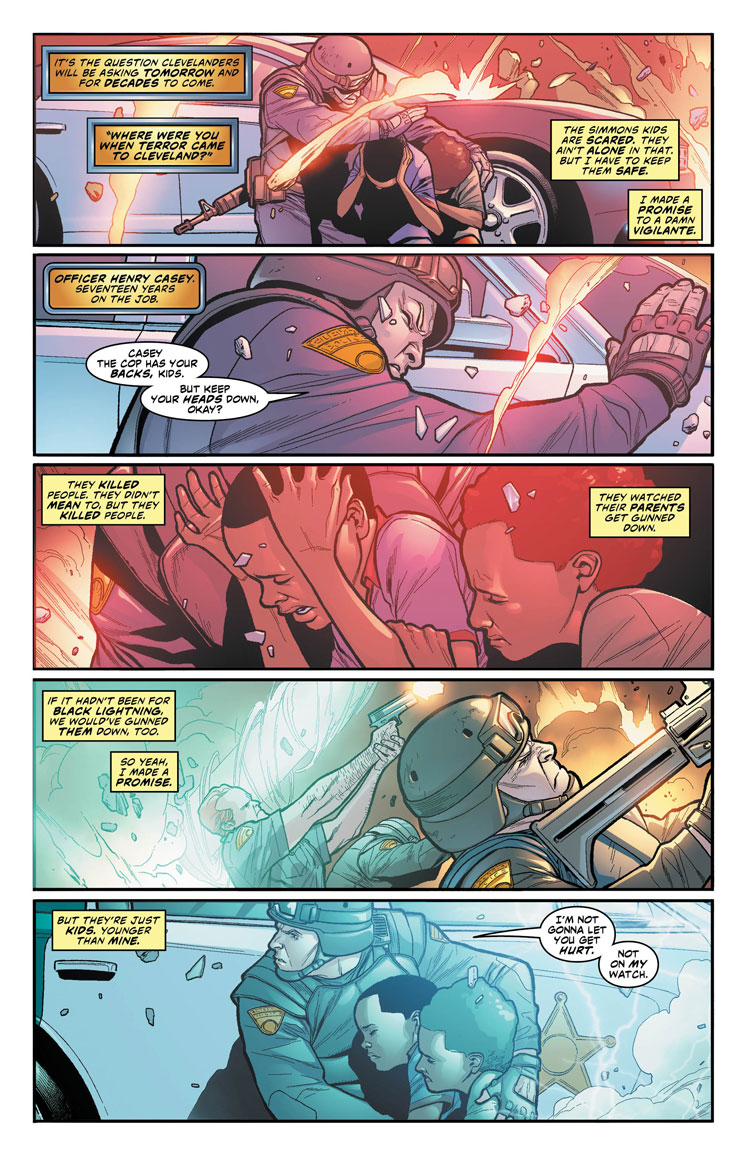 By way of sidebar, “diversity” is now in my vocabulary. For comics, I define it was “If we have readers of any group, they should see themselves in our comics.”

VEH: Something that’s really differentiated Cold Dead Hands from a lot of other recent comics dealing with police and gun violence affecting people of color in my mind is the community aspect. We see Jefferson in his civilian identity teaching his students about oppression and resistance through a play, but there’s also been smaller, indirect plot details like local businesses donating food to under-resourced schools.

Can you speak on why you wanted to include those dynamics and how they correlate to real life community activity in Cleveland?

TI: For more than a half-century, I’ve seen that the right has been gaming the system with redistricting and more blatant voter suppression crap. We have to fight back on a national scale, but also on state, city and community scales. While we try to affect national change, we’ve got to take care of ourselves on the community level.

I’m not an activist these days in the sense that I’m out there in the communities. My gift is my words, and my voice through those words, and I try to use those as best I can. However, when I was two decades younger and preparing for my 1990s Black Lightning series, I did go to the real-life Brick City neighborhood and I saw people working together to take care of each other. I interacted and worked with churches and schools and even law enforcement. I saw people doing wondrous things. They shared their stories with me. This affected me profoundly and continues to do so to this day. My time with them influences. 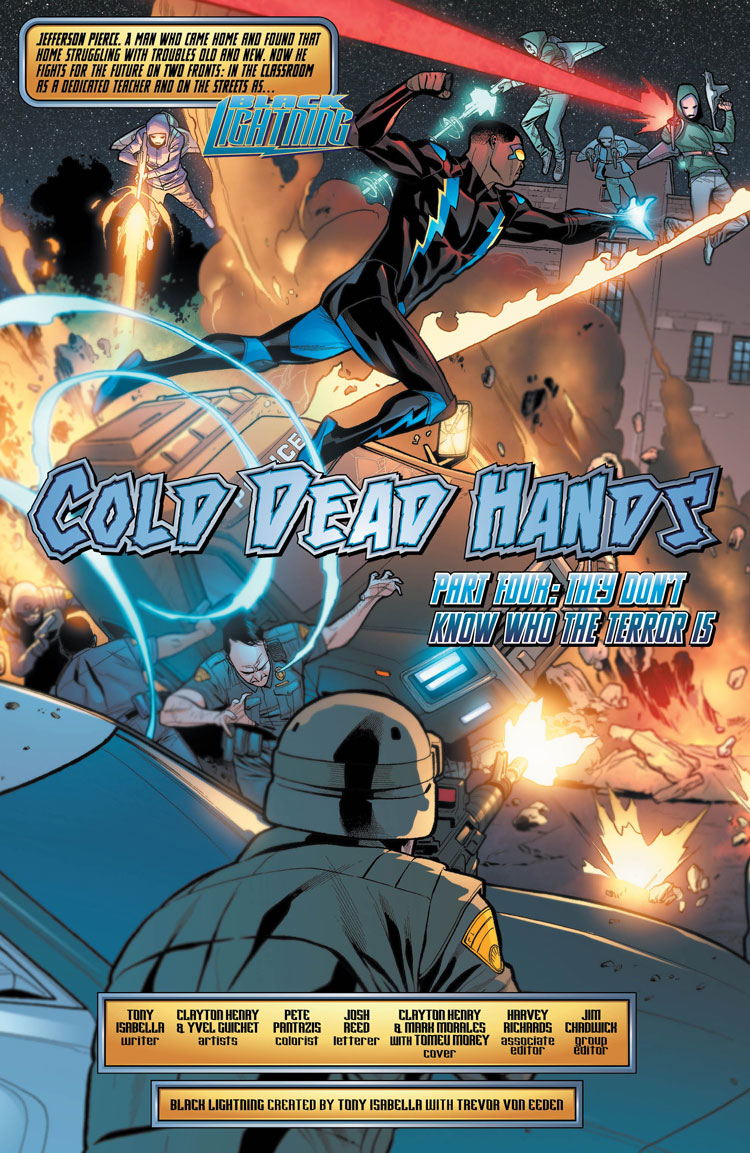 My plan for my 1990s series was to change it up every year or so.

One of the things I’d intended for my truncated 1990s series was to put Jeff and Lynn in charge of an experimental school. My vision was not unlike what Garfield High has become in the TV series. Some of my 1990s ideas for the school were brushed off to become Malvin High School in Cold Dead Hands, which I see as not just a six-issue series, but the start of an ongoing series of Jefferson Pierce/Black Lightning stories.

VEH: Another key success of the mini-series to me so far is the granular detail in describing policing of communities of color from systematic, intentional criminalizing of an individual through repeat harassment (the bodega owner in issue #3) to the sharply different procedures in apprehending white and non-white suspects (the drug dealer arrest in #2).

I felt like a lot of the details, especially in issue #3, related to the DOJ report on policing in Ferguson, and some of the broader phenomena were things I first saw described in The New Jim Crow. What goes into writing these scenarios in this much detail?

Are you drawing on specific cases? Reports from activists or journalists? Are there any particular resources or publications that you would recommend to readers that want to explore these issues in more depth?

TI: Michelle Alexander and Cornel West’s The New Jim Crow has been a powerful influence on my work. So has Radley Balko’s Rise of the Warrior Cop: The Militarization of America’s Police. But, for years, even when there seemed not even a remote chance I would ever return to Black Lightning, I’ve been reading books relating to the issues I wanted to write about.

I read three newspapers a day, online articles and personal stories  and many magazines. I’m a card-carrying member of the ACLU and the NAACP. I contribute to the Southern Poverty Law Center and follow the work they do. The bodega owner in issue #3 was based on a real-life convenience store employee who has been stopped by the police over fifty times in front of his place of employment.

The different methods of policing white and non-white suspects is so blindingly obvious all over the country, even when non-white officers are in the mix, that it was forefront in the mind when I wrote that scene in issue #2. 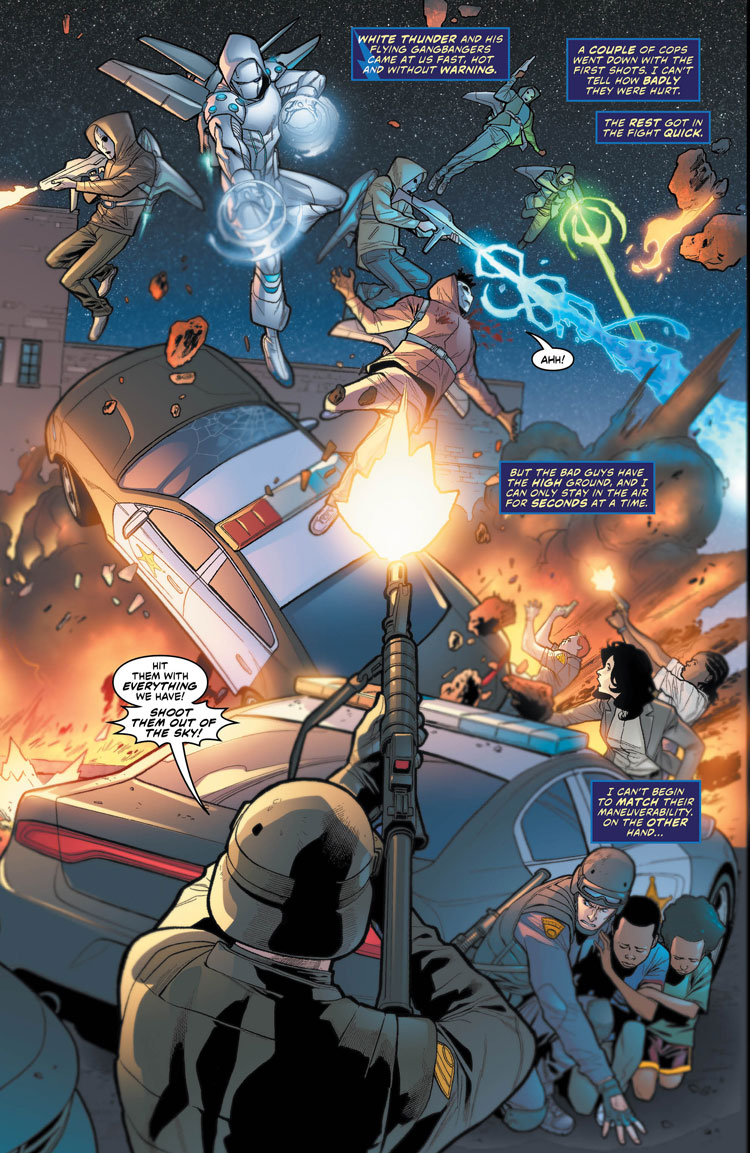 Sidebar: My first draft had Jefferson Pierce personally taking down the drug dealer. It didn’t seem to fit the frankly smarter and more thoughtful Jefferson of this new series. I took a beat to have him consider the possible consequences of his actions. Which led to him calling the police. Which led me to the opportunity to address the differences in police handling of suspects.

VEH: What are the challenges in trying to tackle urgent social issues like police violence in the context of a superhero comic?

TI: The biggest challenge is getting it right. I might not be able to supply the answers to these social problems, but I can do my best to shine a light on them and discuss them within the super hero genre in a thoughtful way.

While the “them versus us” aspect of modern policing is present in Cold Dead Hands, it’s not an anti-cop book as one alt-right comics commentator claimed. My series has good cops, bad cops, and cops who fall somewhere in between. I’m a fan of great cop fiction like Ed McBain’s 87th Precinct novels and TV’s Hill Street Blues and NYPD Blue.

I love the uneasy alliance of cops and super heroes in comics stories. I’m also optimistic that things can change for the better. So it’s not in me to make every cop a bad cop. 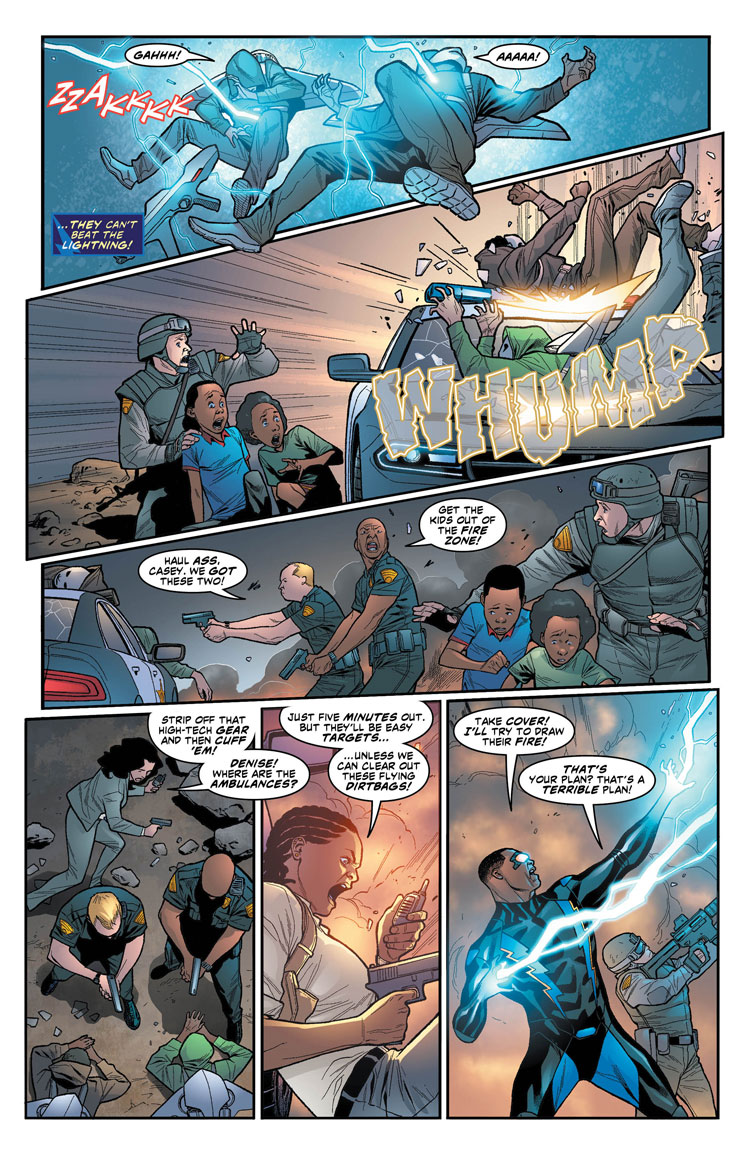 VEH: What, if any, outcomes do you hope for in a story like Cold Dead Hands?

TI: On a personal, selfish level, I hope it shows readers and publishers that this old writer can still tell entertaining stories with a real-world sensibility…and that will allow me to continue writing stories like these.

On a larger scale, I hope those readers will want more super hero stories that are more than super heroes slugging it out with their old enemies or battling universe-level menaces in epic crossover events. I like my super hero stories to be more human. I also want to write Black Lightning stories until they pry my keyboard from my cold, dead hands.

On a national scale, I hope the stories I write about will inspire readers to learn more about the real-world issues facing all of us.

The more they learn, the more they have the potential to be part of the solutions we desperately need in an era when our national and state and local governments have become unhinged. 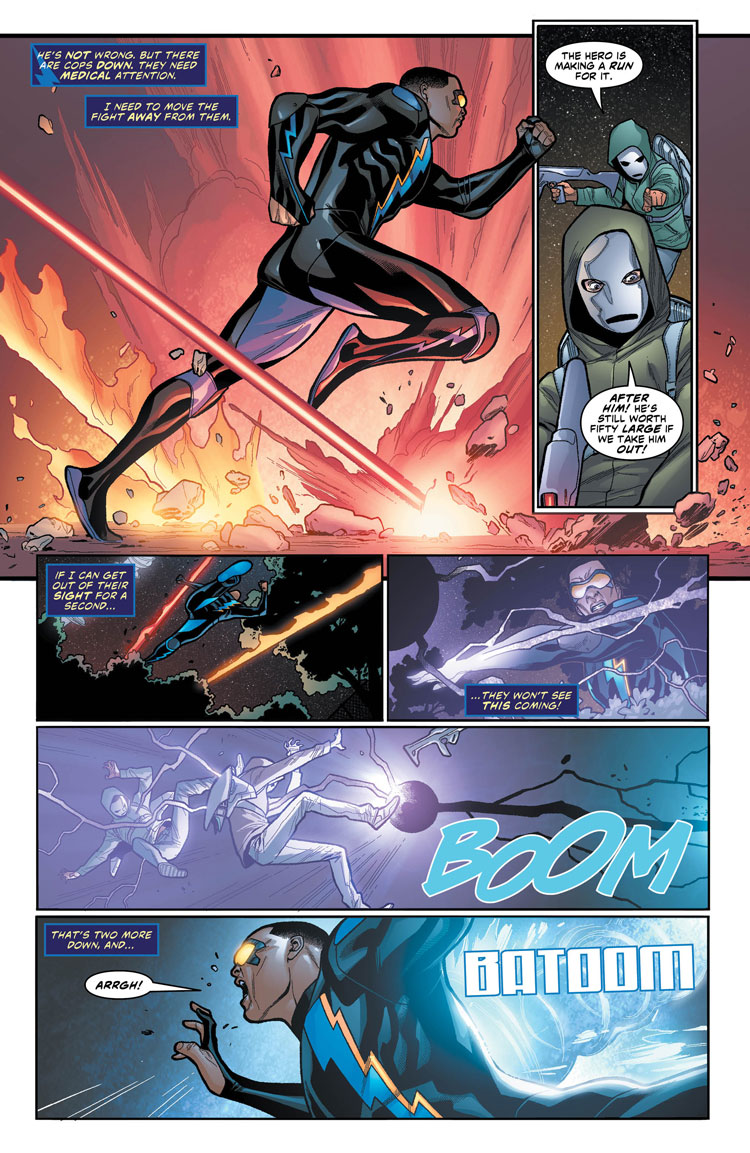 VEH: Finally, do you have any advice or recommendations for readers who want to get engaged in their own communities in dealing with the issues you’ve brought up in Cold Dead Hands from officer involved shootings to under-resourced public school systems?

TI: Given I’m an old fart sitting in a home office researching and writing while occasionally rising to do the bidding of his cat and other family members, this is going to come off like a “Do as I say, not as I do” pronouncement. But…

Do your homework. Know where you stand and why. Get out and vote no matter how hard the Republicans make it for you. Get involved to the best of your abilities and as your situations allow. Challenge the powers that be until the powers that be more closely reflect what you want our country and our world to be.