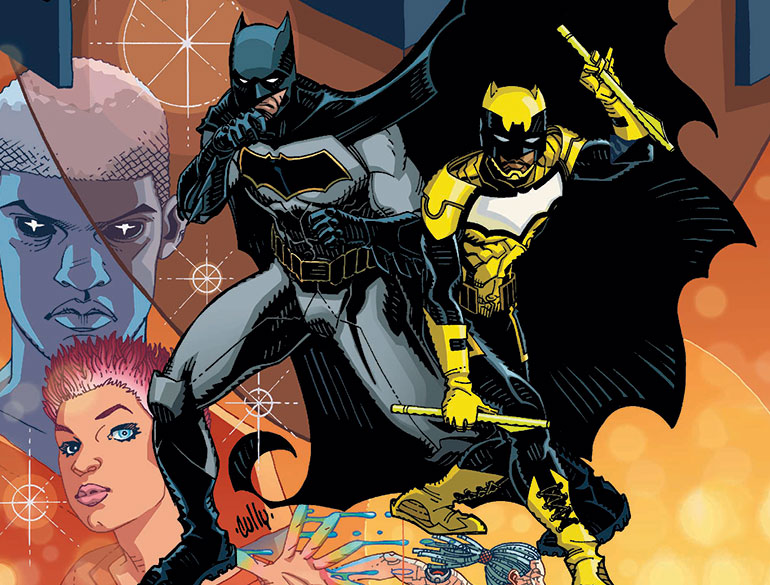 2017 primed Duke for the next step in his journey to become his own hero in titles like Batman by Tom King and All-Star Batman by Scott Snyder and Declan Shalvey. Ever since his introduction in “Zero Year” almost five years ago, Duke has gone nowhere but up and his character is coming into his own with Batman and The Signal. Duke Thomas has elevated through the Bat Family and into his own man.

Now headlining his own mini-series, Duke’s history has been expanded in Gotham by writer Tony Patrick and given him his own time to save the day in Gotham City. In this interview, we’ll get to hear where Duke is headed in part two of this three-issue tale and where he could possibly be heading after the mini-series ends. 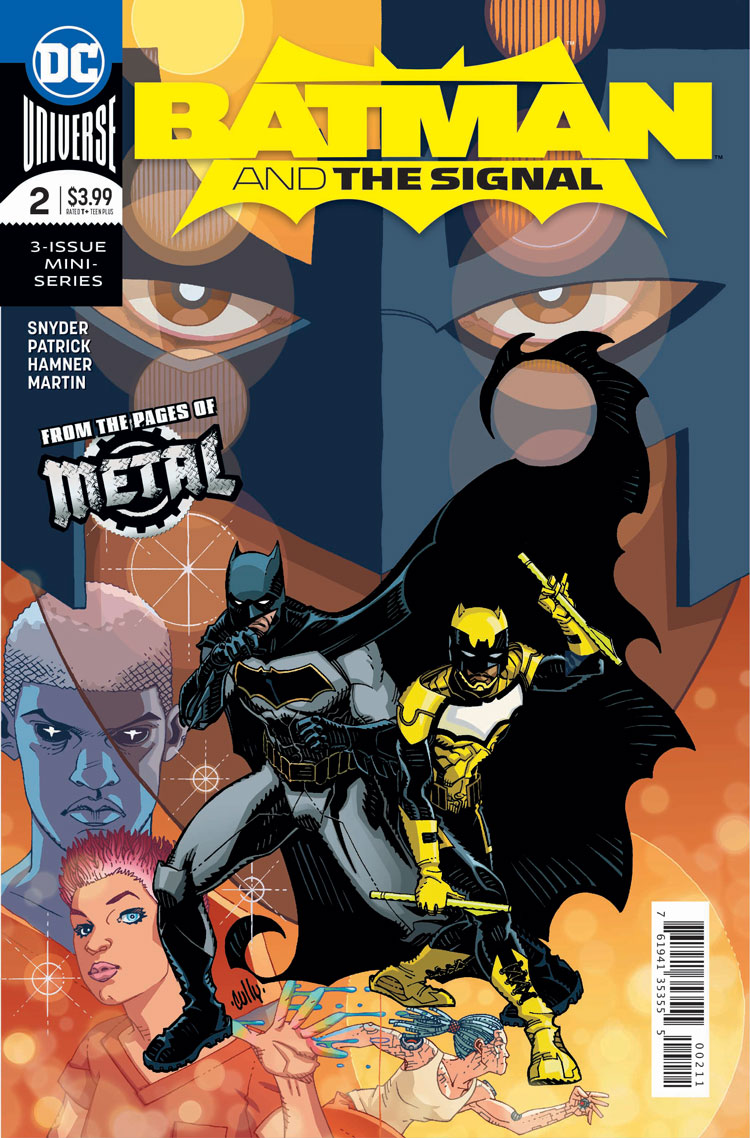 Terrence Sage: With issue #2, you’re really laying Duke’s history with Gotham out on the table for something different in Gotham City, where does Duke go from here?

Tony Patrick: Duke has the responsibility of being Batman’s daytime emissary. He’s dedicated to cracking — in particular with these three issues — the mystery of metas popping up in Gotham. So we’ve got to get at least close to the center of what’s going on here and the new villain that pops up in issue #2.

Duke has a lot more challenges to face on the horizon but we wanted to give him one hell of an introduction. Get a chance to see a little bit more of The Narrows, to see his present day situation so far as living with his cousin Jay, what’s happening with Riko and Izzy, and putting on the armor.

In some ways training is over, but it isn’t! So I think when we talk about what’s to come for Duke, I think we’re watching the ground floor of watching a new hero come into the light (pun intended!) and evolve and find his place within the Bat Family — and also the DC Universe. 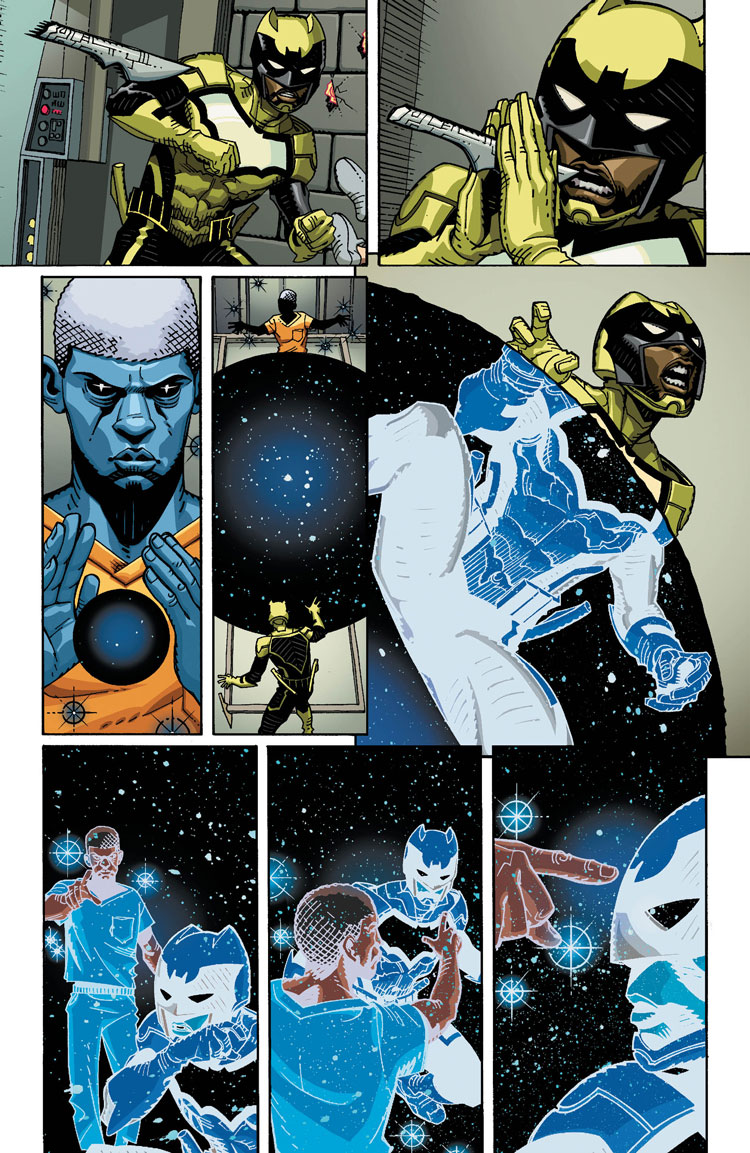 TS: His first solo series as a full-fledged Superhero has him handling different communities with his We Are Robin crew, GCPD, and Batman himself. What is it like guiding his adventures across different sections of the city and the interactions he has?

TP: I think that’s the fun part. And those are the types of interactions and dynamics which build character. Duke Thomas and The Signal, it’s all a juggling act!

We’re talking about a teenage kid who’s been handed a colossal responsibility which is to protect daytime Gotham, not just The Narrows. It’s Gotham. Meanwhile, he has his girlfriend Izzy, who’s a former teammate. He’s still relating to Riko, who we learn in issue #2 has her own perspective and point of view of how Duke should be The Signal. You have a new set of metas popping up in Gotham and Arkham Juvie, which is one of my favorite bits to play with!

We discover that there’s an Arkham Juvie and there are meta-human teens trying to take our boy down. I think we’re talking about an infinite amount of conflict that Duke Thomas will have to balance on a day to day basis, including trying to find a cure for his parents who are infected with Joker toxins. He’s encountering the GCPD in Alex Aisi, who has her own conflict with the department in trying to crack this mystery, plus having a lost an arm in some mysterious manner.

Hopefully, we’ll encounter more and more characters that’ll turn up the heat and the pressure cooker for Duke, which will force him — and it’s happening in these issues — it’s forcing him to be the hero that I think he was reluctant to be at some point.

TS: Will the increased meta population grow into a problem outside of Gotham? Duke seems like a leader of new meta-humans in this regard.

TP: I would love that! But we’ll have to see what happens in issue #3! I think that’s a great idea, but I think for right now we’re focused on Gotham and how it affects Gotham. 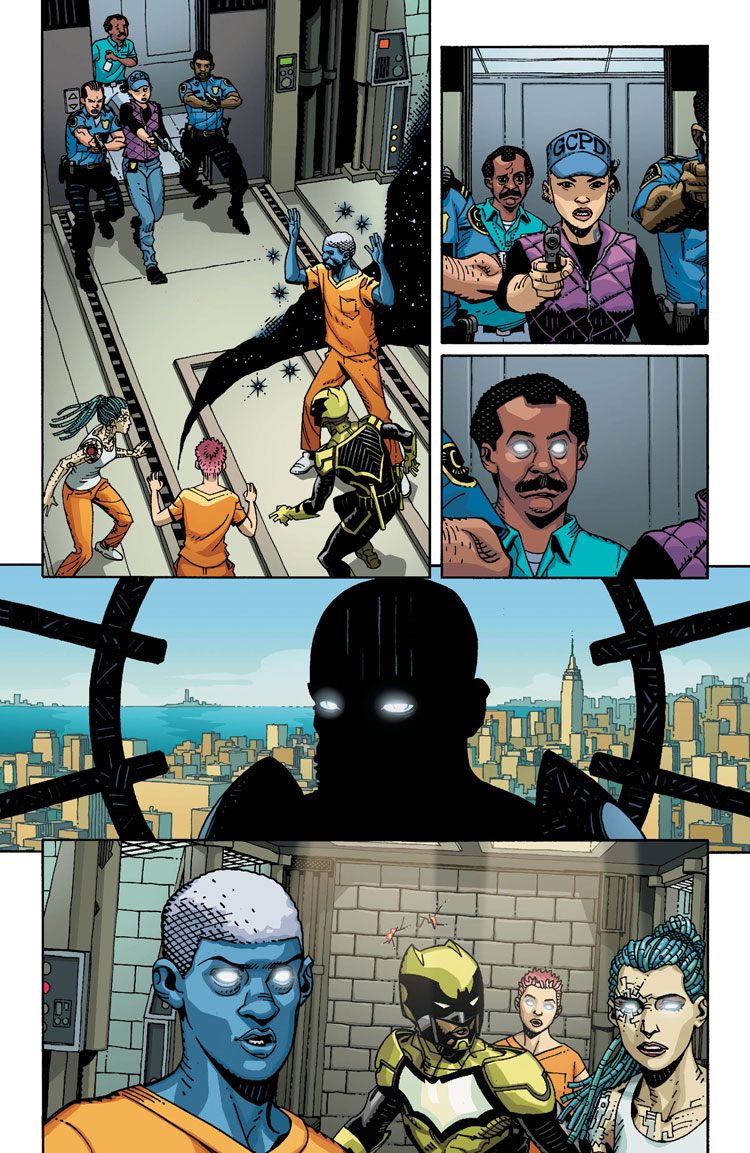 TS: Is it fun to introduce Gotham by Day counterparts to the well known Gotham by Night team? You guys are keeping Gotham busy during the morning shift!

TP: Absolutely. I feel very honored and lucky to have this sandbox to play in, especially with Scott Snyder, Cully Hamner, colorist Laura Martin, letterer Deron Bennett, and editor Brittany Holzherr. I think a lot of people have the misconception that daytime Gotham would be Metropolis, but there’s an entirely different ecosystem in place and I am lucky enough to kind of highlight those systems and nuances.

Hopefully I’ll have more issues to play with, but yeah, if you’re asking me if it’s fun? It’s a once-in-a-lifetime opportunity and I take it very seriously. I honestly believe daytime Gotham is more corrupt than nighttime Gotham, and the things we haven’t been able to see because they’ve been underneath the surface.

Like in issue #1 we have this Narrows resident who basically spells it out “You guys are only supposed to be here at night! You’re not supposed to be here in the daytime.” I think The Signal, again pun intended, is a signal for things to come, and like in the beginning pages of issue #2, we get a chance to see all those flaws and cracks of Daytime Gotham. To know the full truth of the city and its real character, I think it’s been lopsided in some ways. I don’t say that with a negative connotation. I think the world of the opportunity to showcase a lot of great Gotham stories, so I’m trying something new by tackling the daytime and daytime work and installing Duke as an emissary during that time period.

TS: Next issue is the final issue of the miniseries, are you leaving just enough room for another series of adventures for Duke and his cast?

TP: Always! I’ll say yes and always! I hope I’m a part of those future stories. Who knows if it’ll happen, but I would love to see more Batman and the Signal and I have a wealth of stories to tell about daytime Gotham, so I hope I get a chance to play in that sandbox a little bit longer. 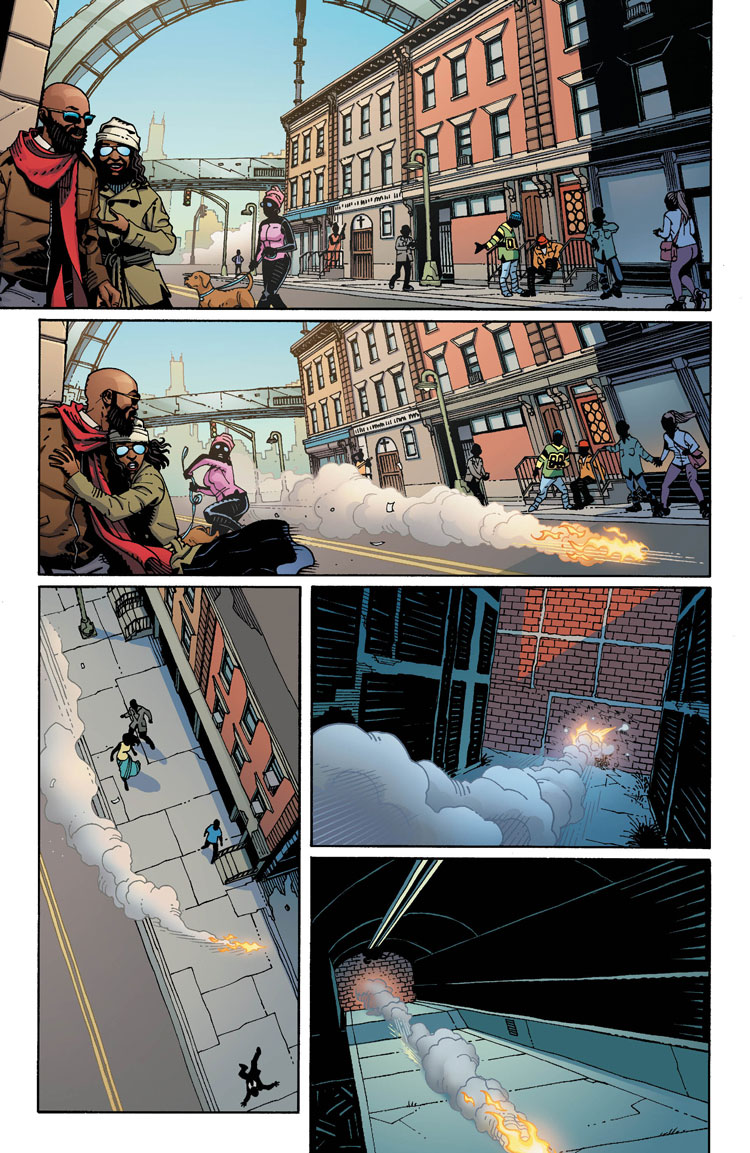 TS: How does Duke’s Blackness alter the typically white viewpoint of Gotham we’re used to?

TP: Here’s how I would phrase that, and I want to be very transparent on the point here to be as accurate as I can be. I don’t look at it as a typically white viewpoint, I think you’re talking, if you’re talking about Batman. I think of it as, yeah there’s been a particular lens possibly that exists there. But this is the new opportunity.

We use the Signal to shed the light on diversity, adversity, and just a new way of telling a great Batman story. I understand how relevant Duke is, particularly in this time period of Black Panther hitting the theaters. I think this is a very powerful time and there’s a very powerful opportunity of building new characters and new stories, especially of characters of color and from other backgrounds and orientations.

For me, Duke Thomas is like getting on the ground floor of a great new character who sheds the light on so many different challenges. He’s someone who I think can speak for everyone and can speak specifically for people, at the same time. I feel very honored to take this character to the next level and to introduce new characters as well. I think when we talk about how diversity has been handled in comics, I feel like Batman and The Signal is diversity done right.

This is a character that’s been home grown for a matter of years and who we’re watching evolve before our very eyes. So for me, the dream is to watch The Signal evolve into this character with these incredible powers and that has this incredible support — supporting characters and major heroes that he collaborates with and tackles even more grandiose obstacles and crises.

I’d love to see The Signal end up in the Justice League one day! Those are the kind of dreams I have for this character, but this is where the opportunity is. So when we talk about that lens, I think this is a new lens for a new opportunity. 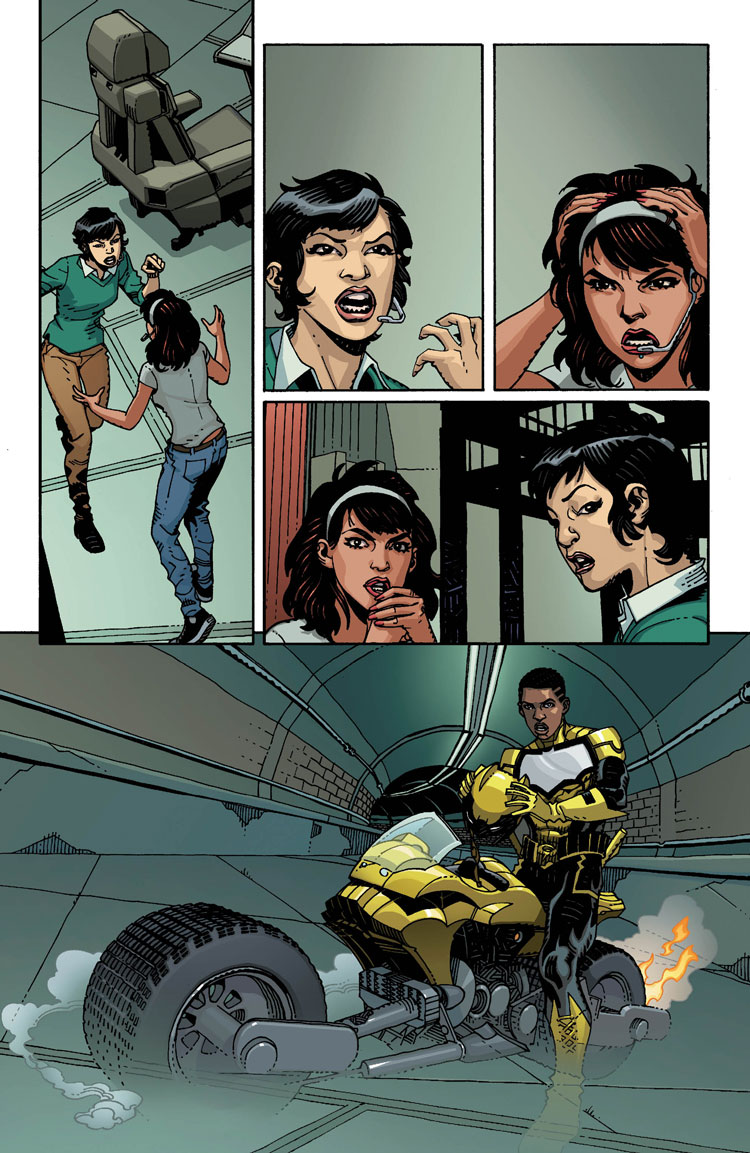 TS: Where would you like to see Duke end up in the DC Universe this year?

TP: If we’re talking about 2018, I think Duke should be in school. Battling school, dealing with Izzy as a girlfriend, dealing with past We Are Robin characters, finding mentorship from a few other members of the Bat Family. Really embracing his role as Gotham’s daytime protector, as he tries to find a cure for the Joker Toxins for his parents.

Tony Patrick, Scott Snyder, Cully Hamner and the rest of the Bat Family bring you Batman and the Signal #2 tomorrow, online and in stores everywhere. Don’t miss it!