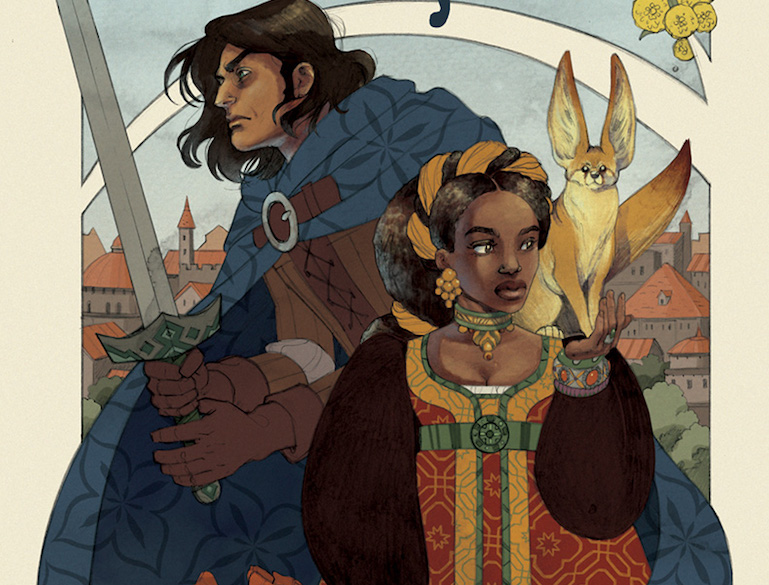 This coming Wednesday, comic shops will see the arrival of one of the best fantasy comics you’ll read all year. Sleepless, a romantic fantasy comic from Sarah Vaughn, Leila del Duca and Alissa Sallah, tells the tale of Poppy and Cyrenic, two dynamic characters living in a fantasy kingdom that is rich with storytelling potential. This powerhouse creative team was kind enough to give me the scoop on their new series, in stores December 6. 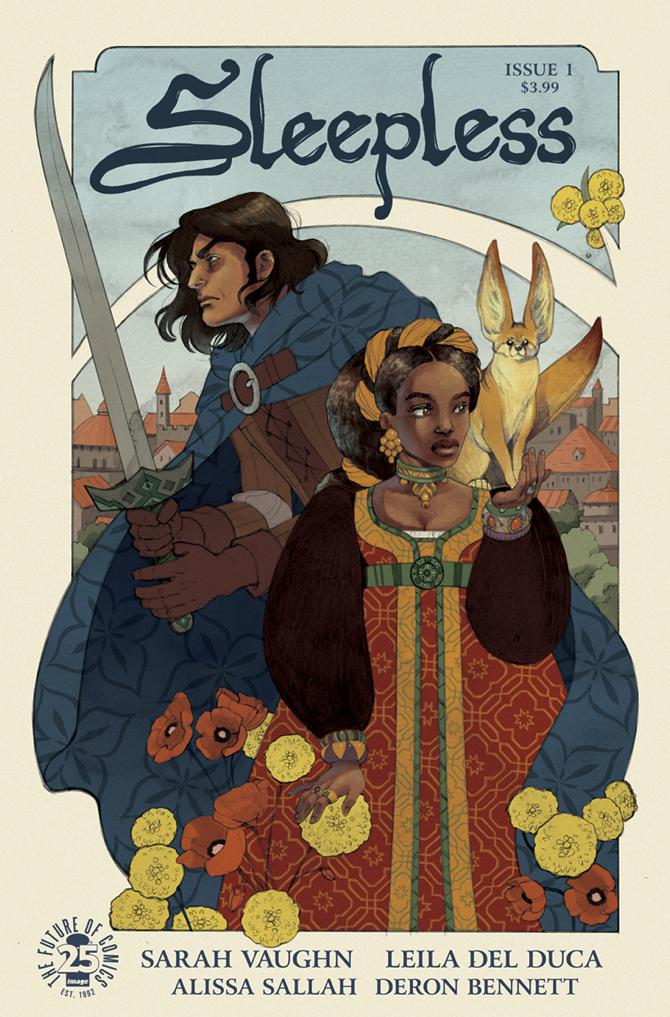 Aaron Long: So how did Sleepless come together as a project?

Leila del Duca: At New York City Comic Con 2015 I asked Sarah if she wanted to write a romance comic with me. I had read ALEX + ADA and loved her and Jonathan Luna’s take on the genre. ALEX + ADA was more grounded and believable than a lot of the romance comics I had read. I liked that it had a serious tone while maintaining the romantic tension, which is something that I love about a lot of period dramas. Therefore, I could not have left that convention without asking if she’d work with me and thankfully she said yes! We pitched our concept to Image a couple years later when my work on SHUTTER was slowing down, and luckily they said yes, too.

Alissa Sallah joined our team as editor and colorist after she interned at my studio, Helioscope, in Portland, Oregon. Her insight and feedback on our worldbuilding was amazing, and I loved what she did while coloring my linework. While searching for a letterer, Deron’s name kept popping up along with his praises and he’s been an amazing addition to the team. He came up with a unique lettering style just for SLEEPLESS, which is something he does on all of his projects. He’s great! Hire him! 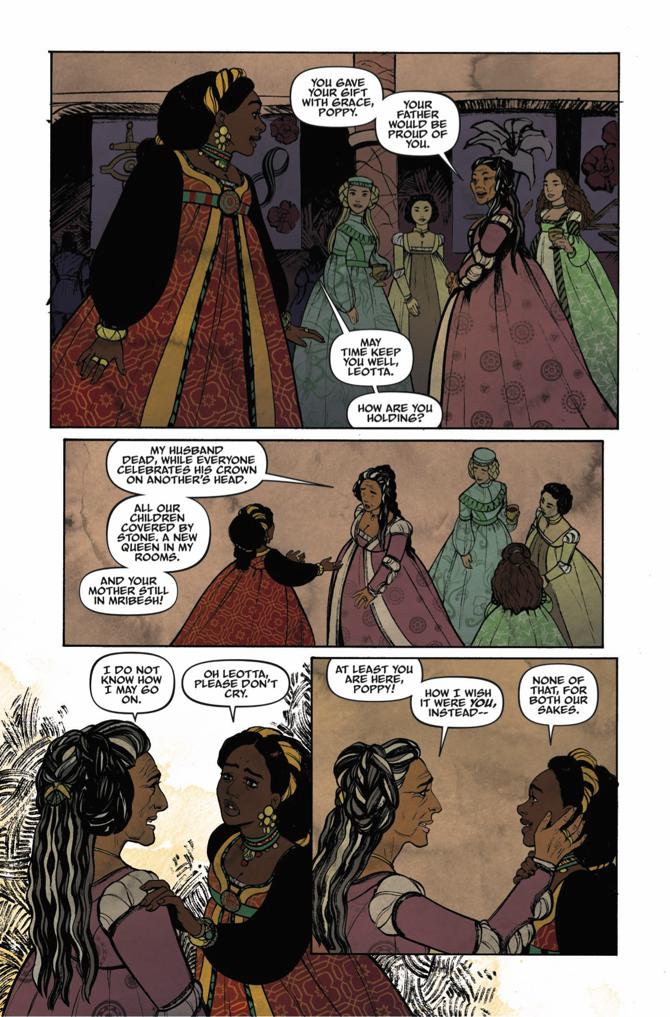 AL: What can you tell me about the world and characters of Sleepless?

Sarah Vaughn: The world is very loosely based on the early 16th century. Our focus is the court of the country of Harbeny, which has strong political alliances with Edtland in the north, and Mribesh across the sea. Life at court is in flux as the new king is beginning his reign, and people are needing to make careful choices on how they can stay in his good graces.

Alissa Sallah: We wanted to make SLEEPLESS feel a little different from most fantasy by having the setting be inspired by Mediterranean and North African regions. This allows us to be more creative in how we depict the world and its culture without simply going with the most common visual direction. A lot of western fantasy takes the majority of it’s influence from northern Europe with any other cultures involved in the story only seen as “foreign”. In SLEEPLESS, the focus is somewhat reversed with characters from Edtland, the Saxon influenced country, being introduced as the foreign element. 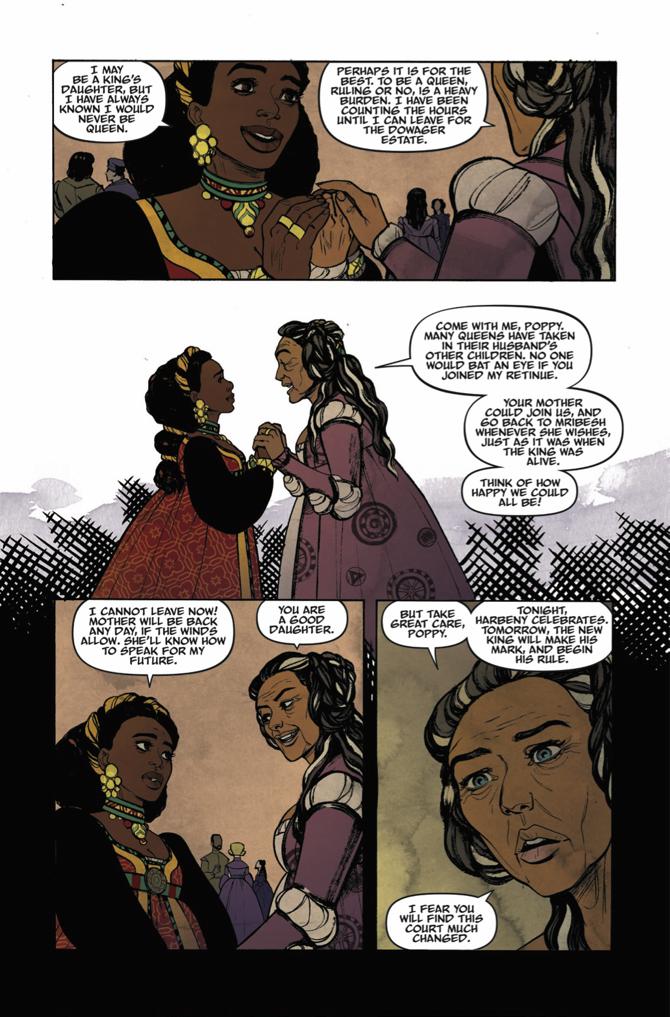 AL: Poppy is certainly going through a major shift in her life with the death of her father, can you shed some light on her role in the kingdom and her relationship with Cyrenic?

SV: Poppy is the illegitimate daughter of the dead King Verato, and his only surviving child. Though she isn’t a princess, she has her own title and estate in Harbeny, and while her father was alive, had a very free and luxurious life at court. Now that her uncle is the new king, Poppy’s position is precarious. She is completely dependent upon the goodwill of King Surno, and can do nothing life-changing without his consent…which may be difficult to get.

Cyrenic is a knight who took the vow of Sleeplessness to protect Poppy, and has been watching her day and night ever since. They have a very close relationship, but Cyrenic never lets Poppy forget that he is in service to her. She has a habit of teasing him and pushing boundaries, while at the same time depending on him for moral support. AL: There are many references to time in the first issue. Does time operate the way we are used to in the world of Sleepless?

SV: General time passes the way we are used to, yes. But the concept of time and life is based on a linear concept of fate. People who are gifted in magic are able to bend and borrow time in people’s timelines to manipulate aspects like healing or the need for sleep.

LD: It’s been extremely different. Like SLEEPLESS, SHUTTER demanded a lot of referencing but it was largely inspired by the real world which meant I didn’t feel the need to do extensive research on clothing and architecture. I already had it in my head from living in modern times. It also meant I didn’t have many strict rules on where I drew inspiration and design elements from. With SLEEPLESS, it’s a more grounded tale set in one location with very specific influences from a particular time in human history. Those challenges have been very rewarding and I love that this comic pushes me to study historical fashion, architecture, and ways of living more than any other project has so far. 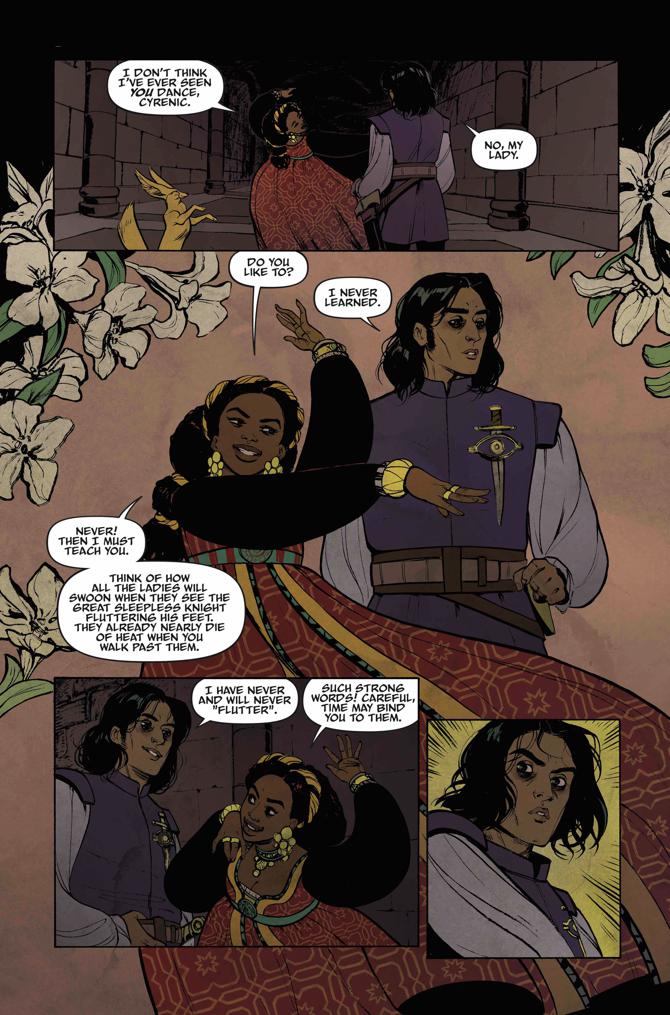 AL: Last words go to you: any final thoughts on Sleepless you’d like to pass along to readers?

SV: I very much hope people who read it enjoy SLEEPLESS as much as I’ve loved working on it.

LD: I don’t see many fantasy stories like SLEEPLESS out there in shops these days. If you want a little more variety in your reading list, this will be a beautiful and romantic series that pulls at your heartstrings.

AS: This story evolves in a really fun way, we’d love for people to join us through it!