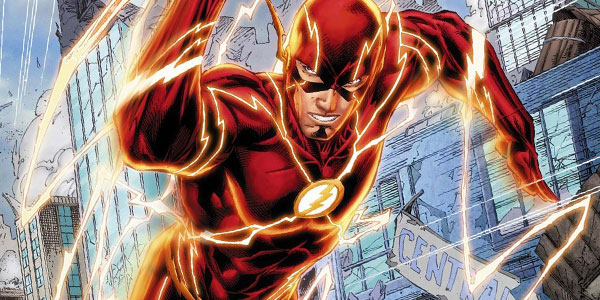 With a massive boom, DC Comics brought Wally West back to the pages of the New 52 in The Flash #30 this week, written by new collaborative team Robert Venditti and Van Jensen — the creative minds behind Green Lantern and Green Lantern Corps. The gentlemen took time out for a quick chat about what Wally’s presence means to Barry, how Iris West will have a larger role in the series, and what fans can look forward to in their upcoming Annual. 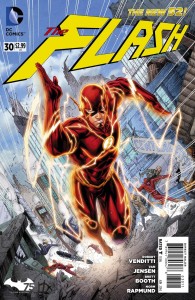 Matt Santori: Congrats to you both on the new series, and for expanding your hand in the DCU Universe to the other big name Silver Age classic. How did you come upon the opportunity to add The Flash to your current work on Green Lantern?

Robert Venditti: Brian Cunningham, the editor on The Flash, approached me about taking over the series somewhere around the Fall of last year. I saw it as a great opportunity for Van and I to work together again. We had worked together on Green Lantern Corps and are really good friends. We had a great time working together, but I also felt — specifically for this series —Van’s background as a crime reporter would really allow him to bring something very unique to the series. I don’t think a lot of people could bring that. It adds an authenticity to Barry’s job in the crime lab and, even more importantly, to Iris West as a crime reporter. With the introduction of Wally West, Iris is going to become a more central character to the series than she was beforehand.

So, with that, Van came on the book and we’ve been working on it together pretty much from day one.

MSG: Big question up first: why was now the right time to return Wally West to the pages of the New 52, and how did that story development process work?

RV: Well, it was DC’s idea to reintroduce the character. Personally, when I’m taking over a new series, I tend to focus more on what’s already been going on with the book and picking up from that point. I would never presume to be able to reintroduce new characters of the stature of someone like Wally West. But, when they floated the idea of doing so, I was of course very excited about it. 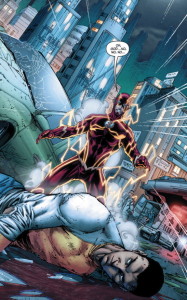 I think what we’ve learned as we’ve been writing this series is that bringing him in has added so much to it in terms of not just adding Wally West as a character in the story, but also expanding Barry’s character. We have the opportunity to look at him from another viewpoint. It’s really taken the series in some directions that I didn’t anticipate when we started the job. Our stories are far better because of it.

MSG: Can you talk a little bit specifically about the decision to reintroduce Wally West as a person of color?

Van Jensen: That was also something that came from DC. To DC’s credit, it’s a company committed, with the New 52, to really reflecting the diversity in society that exists in reality. It’s a very diverse, modern society that we live in, and the New 52 should reflect that.

For us, the character is about much more than that. He’s really added so much to the series. It’s been a great opportunity to explore Wally as a character, and then to use his unique personality to explore Barry in a new way. It pushes Barry into some new situations, and has definitely added a lot to the book.

MSG: Barry, of course, is still your primary star, and the guy who’s been saving the world on the regular in the DCU for five years. What do you believe is the core of his heroism and how will that be playing out in your upcoming story, particularly with a slightly more addled future version of himself on the way? 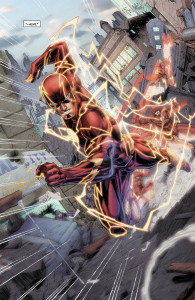 VJ: Barry is really pure, very good — I don’t want to call him “boy scout” because that’s Clark — just a very stand-up guy. If he has any flaw, it’s that he wants to do too much. He wants to help more than he is able to. We see that in him in the present, as well as the strain that comes from trying to do everything, be everywhere, and help everyone.

Then, when we meet him twenty years in the future, we see a very different Barry Allen who, in a lot of ways, is broken, distraught, and disillusioned with life. It begs the question of what happened, and what is it that was able to change Barry in such an extreme way. That’s really the mystery that we’ll be exploring in the coming months.

MSG: Iris West has been an on-again/off-again member of the cast for some time, much to the subtle chagrin of Barry’s live-in girlfriend Patty Spivot. How do you see the two women relating to Barry differently?

VJ: That’s a great question! Patty really is very similar in temperament and mindset to Barry. She’s encouraging and supportive and really energizes Barry. She helps him in his life as a super-hero and working in the crime lab.

His and Iris’ relationship is very different. They are really very different types of people. She’s a little more fiery, as an up-and-coming crime reporter — which is a job I used to have, so I identify a lot with her. She’s really striving to make career for herself. What we’ll come to see is Iris coming up against the challenge of making it big as a crime reporter, which sometimes means covering things and diving into things that are really pretty horrible and nasty. There’s even some ethical challenges to that. 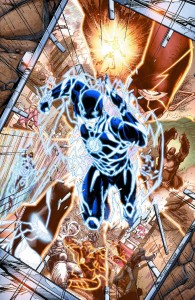 So, there’s a lot to come for both of those characters, and they’ve been a lot of fun to write.

RV: I think that Patty, in addition to being Barry’s girlfriend, is his best friend and his confidante. She knows about his life as the Flash and she is a really big part of that. Above all else, she’s the one person Barry absolutely knows he can count on, no matter what.

With Iris, I don’t think we’ve seen the extent of her and Barry’s relationship yet. There’s going to be a lot of growth there, and we’ll be seeing how, as this relationship progresses, that really affects Barry and Patty in ways that are maybe unintentional. There’s a lot of stuff we’re doing with all the characters, but Iris is going to be a key focus of the series going forward.

VJ: As I mentioned before, now that we’ve introduced Wally, the events in The Flash Annual #3 will end up making her role even larger.

MSG: Almost without notice, the Flash universe has begun re-expanding into the New 52 in a way we always associate with the Green Lanterns — with Barry, Jay Garrick, The Reverse Flash, Johnny Quick, and Bart Allen all offering different takes on being the Fastest Man Alive. With Wally joining the mix, how do you balance building a mythology with retaining focus on your core character? 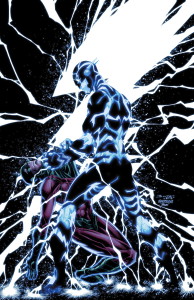 RV: I think it’s about utilizing Wally as a character through which we can view Barry, if that makes any sense. So, instead of telling the story from Wally’s point of view, we can use him as a cast member that allows you to see Barry as something you wouldn’t see otherwise. We have Patty, who’s his girlfriend, and Iris as the reporter, and Darryl Frye as his father-figure. We don’t have a character like Wally at this point in the series, and I’ll be honest, I don’t know that there’s a character like Wally in the entirety of the DCU. So, he allows us to look at Barry from a perspective that wouldn’t be there otherwise.

MSG: Any final teases for the Comicosity audience about next week’s Annual?

VJ: Wow! Lots of stuff coming down the line! We’ll learn a lot more about Wally and Barry and what the overall plot is in the Annual. We’re going to see a lot of classic Flash villains in this first story arc, but also introduce a lot of new villains. Lots of mystery. Lots of reveals. Looking at the speed force and the limitations of Barry’s power set. It’s going to be a pretty full few issues here coming up!

DC Comics is not making anyone wait long for the next installment of Robert Venditti and Van Jensen’s TheFlash. Annual #3 arrives in comic shops next Wednesday, April 30!