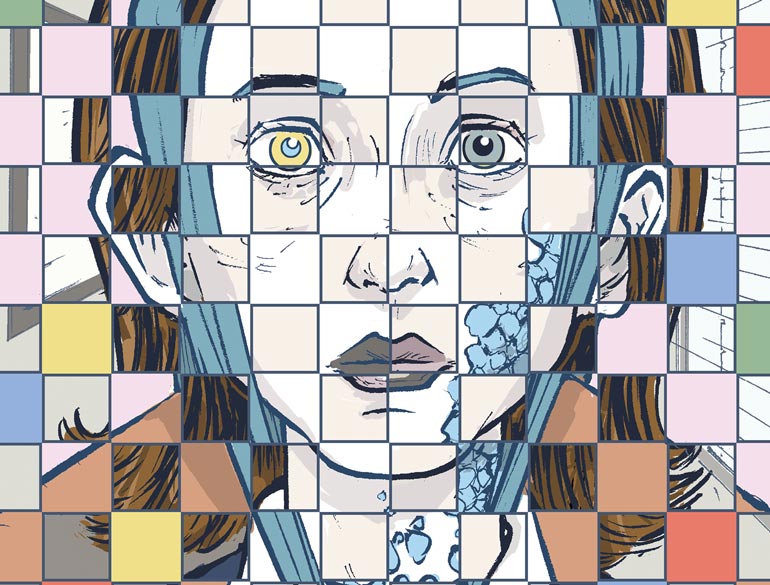 Busting out of the panels — literally — from last month’s “Milk Wars” crossover between the denizens of Young Animal and the Justice League of America is Eternity Girl, the newest super-hero who’s been there for decades and has had enough with life. Scribing her journey into the dark unknown are GLAAD and Eisner award-nominated Kim & Kim writer Magdalene Visaggio and Eisner award-winning The Art of Charlie Chan Hock Chye artist Sonny Liew.

Visaggio and Liew were on hand to see Caroline Sharp — the Eternity Girl — off and share a bit about the  inspiration behind a suicidal and depressed protagonist, the way that mindset contributes to the narrative and visuals, and expose just which one of them really likes Mexican food. 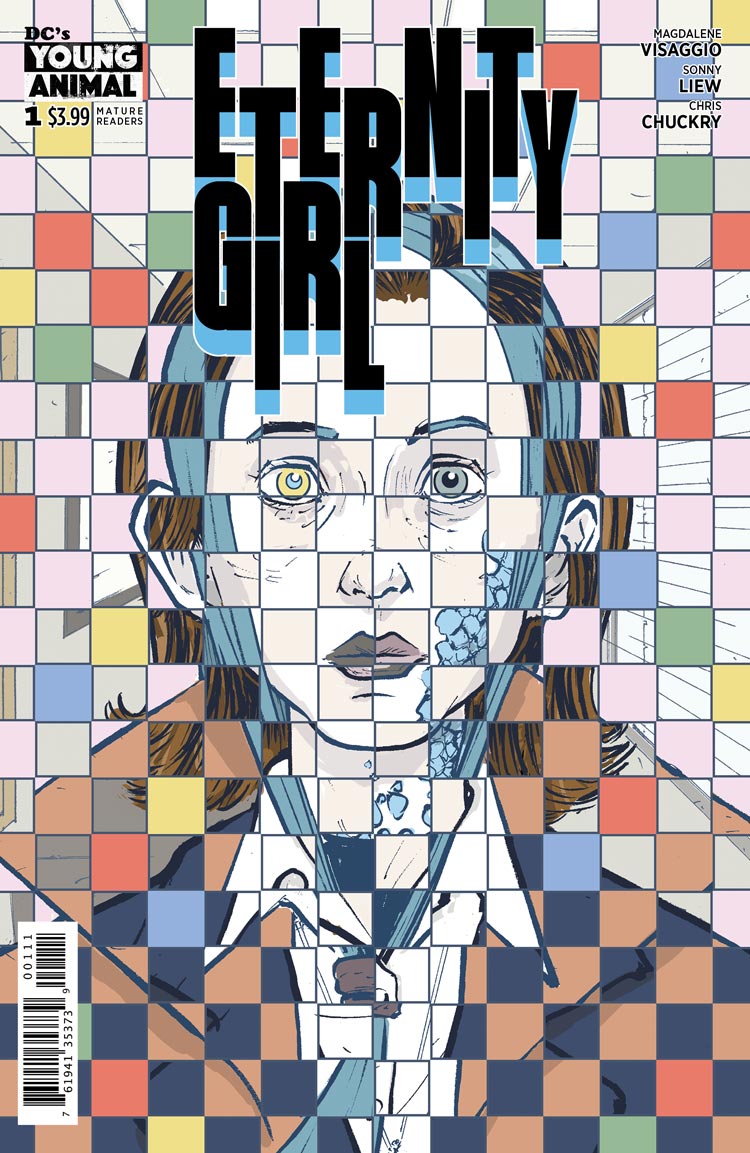 Matt Santori: Congrats on the new book to you both! How did the initial idea for Eternity Girl percolate and bring you two together?

Magdalene Visaggio: Eternity Girl actually came directly out of my “Element Girl” short in Shade the Changing Girl #4. My editor at the time, Jamie Rich, was really impressed with that little three-pager, and I decided to really push my fucking luck and ask him if I could pitch a series based on the character.

So the first version of Eternity Girl actually starred Urania Blackwell, and was a really direct sort of answer to what Gaiman did with her in Sandman. I wanted to do a depression story about recovery.

We ended up deciding fairly early in the process to go with an original character for a variety of reasons, chief among them was the degree of freedom it would open up. But the core of the idea has stayed the same: what happens when you’re an immortal who doesn’t want to live?

It’s not coincidental that I wanted to do a book about depression; I developed the core concept during a chunk of time when my marriage and job were both in total collapse, and I was at one of my lowest points. So doing a story about depression that would try to center on finding a reason to keep going was really cathartic for me. I do that a lot; Kim & Kim: Love is a Battlefield is all about my divorce, too.

Sonny Liew: The idea was Mag’s — I think the editors at DC thought I might be a good fit for the book after she’d pitched it. I had a great time working with DC on Doctor Fate with Paul Levitz the last time round, and the story sounded intriguing, plus I wanted to do something a bit more mainstream before going full tilt on my next OGN… so I jumped onboard when asked. 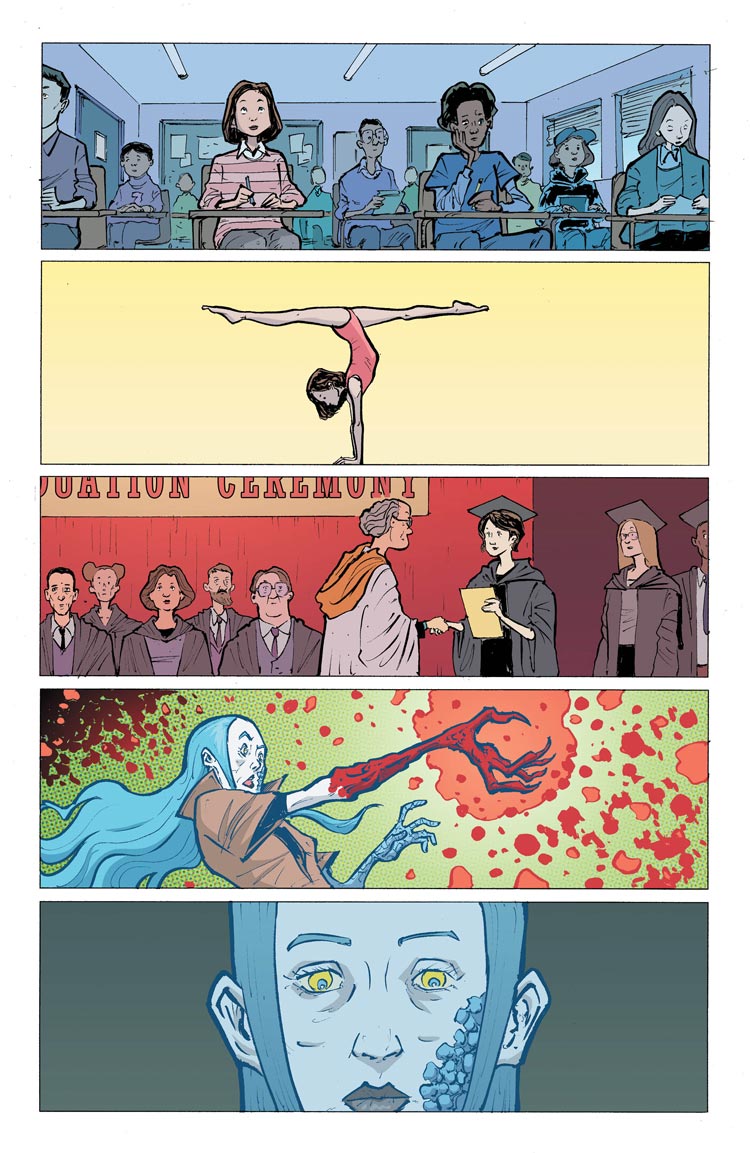 MS: I can see the turn of 1950s adventure hero toward 1960s monster heroes both in your design and characterization of Caroline’s history as Chrysalis. Talk to me about the process of creating that background and how it informed Caroline’s modern day look and behavior for you.

MV: The backstory there for me is largely serving the purpose of introducing some of the book’s biggest themes, specifically reincarnation and the endless cycle of birth and rebirth. That has resonance for me as a lifelong comic book reader, you know, endless reboots and reinventions, and dovetailed nicely into Milk Wars.

And since Caroline has such strong roots in early Silver Age comics, I decided to start there and work my way forward from era to era: Silver Age to early Bronze Age via Watchmen, into some punk Vertigo, and then to like late-aughts Jeff Lemire. I just wanted to take the character’s core conceit and just move it forward, era by era, and see how it developed.

SL: In terms of the visual look of the book, Daniel Clowes was an inspiration – he has a way of depicting modern day ennui and anxiety that I thought would work well for the book. I guess it mostly shows up in some of the camera angles, like the frontal close-up of characters faces.

For Caroline as Chrysalis, I drew on visual cues from depictions of ancient goddesses – the clawed feet for example are seen in statues of Isthar, the Assyrian and Babylonian goddess, along with more contemporary elements like her hairstyle, which I’d seen on mannequins in a shop display in London some time back.  A mixture of the old and new, and borrowed things, just needs some blue and a sixpence for the shoes. 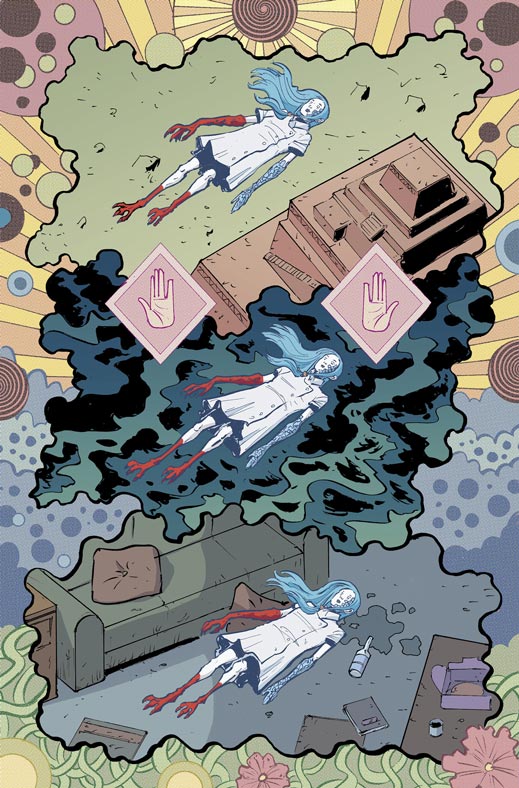 MS: One of the things that strikes me about Caroline is that she’s functional in everyday terms. I think it’s an important visualization of how depression and suicidal ideation can look in real life, becoming something of a new normal over time.

What are both of your thoughts on how you developed that sense of Caroline’s psyche visually and in narration?

MV: I’ve been really upfront about my history with and experience of depression, and really Caroline’s depression is my depression: it’s dissociative, poorly hidden, and hard to communicate. She isolates herself – notice Dani comes to visit her unannounced – and, importantly, that means her sense of time gets weird.

I lost my job right after my wife moved out – like, that week – so I was depressed, lonely, and had nothing to dictate the flow of the days. Everything just melted into everything else, and it got hard to tell what day it was, what week it was.

Here, I’ve employed some nonlinearity to try and communicate that sense of timelessness; panels flash around from past to future, not because time is weird, but because time is weird subjectively for Caroline. And her fantasy life is rich and violent towards herself; her suicidal ideation is ever present.

SL: For the most part I tried to shy away from making the supporting characters too attractive in a traditional way — so there’d be something a little off in their appearance. In my mind that might reflect Caroline’s own perception of the world, even if we’re not always or exactly seeing things from her point of view in a narrative sense.

MS: What are your thoughts in including therapy as a central activity at the very start of the series?

MV: I’m a big believer in therapy, and I’ve been going weekly for the last three years. I honestly don’t know what I’d do without it.

So since I was doing a book about depression, I thought why not include something that was for me a core experience of it: talking to someone who is paid to listen and help sort stuff out? Caroline’s therapist isn’t super effective, but it provided a simple in to discuss her experiences frankly, and created opportunities for diegetic exposition. Fuck, that sounds mercenary. 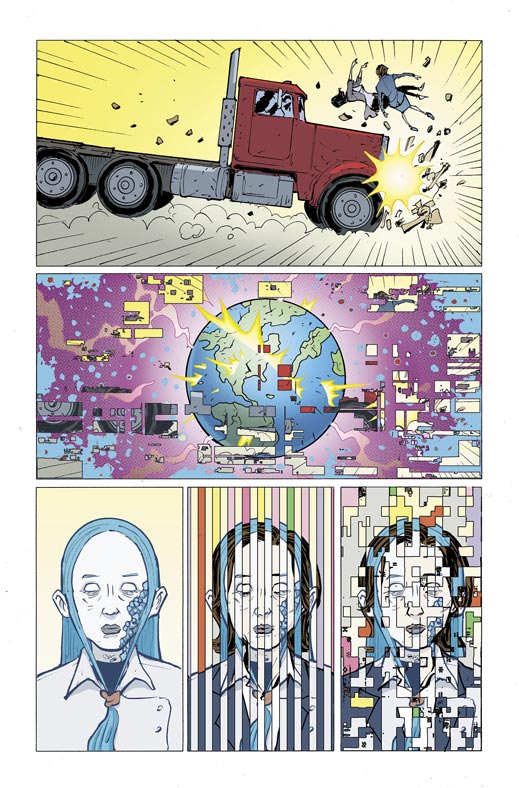 MS: There’s a question, I guess, about what is real and what is imagination — and if those distinctions hold water for someone like Caroline.

Is Madame Atom really there? Is there really a higher cosmic plane, or is this just more ideation? How do you ride that line in terms of both the narrative and the art?

MV: I don’t want to give too much away, but the line between them is going to be very blurred. I want the reader to feel disoriented, and I want them asking exactly those questions right to the very end. They’re real for Caroline, which is what matters right now.

And since it’s a comic book told from Caroline’s POV, we can get into a whole structural thing about whether that’s the only version of things that can ever matter; there’s no objective world she’s living in, only the text we’re reading, which not only makes questions like that kind of moot, but also kind of ends up shoving its head up its own ass.

SL: I think Mags has a better handle on this – as far as I can tell, the various realities are rather porous, and I just tried to draw panels to help distinguish them as best I could. We push the envelope more as the series progresses, and Mags is always giving me mini-nightmares with stylistic shifts in the story… but those are always interesting challenges that I kind of enjoying trying despite the sweating.

MS: One thing that really resonates for me is this idea that the most difficult form for Caroline to maintain is that of her original, pre-Chrysalis appearance. It seems to be an expectation, but not necessarily a desire, for Caroline to be able to accomplish that.

Talk to me a little about what that psychological nugget represents in terms of the broader narrative.

MV: It’s about trying to be normal when you’re broken down. It’s a pretty on-the-nose metaphor. She wants to have her old life back, but her old life is impossible; she lacks the basic capacity to operate in that way anymore. Her old life – her old human form – wasn’t even really her anyway, as she’s been a shapeshifter for a long time, but it provided a sense of continuity and normalcy between her human life and her Sumerian elemental superwoman life that she can no longer maintain. 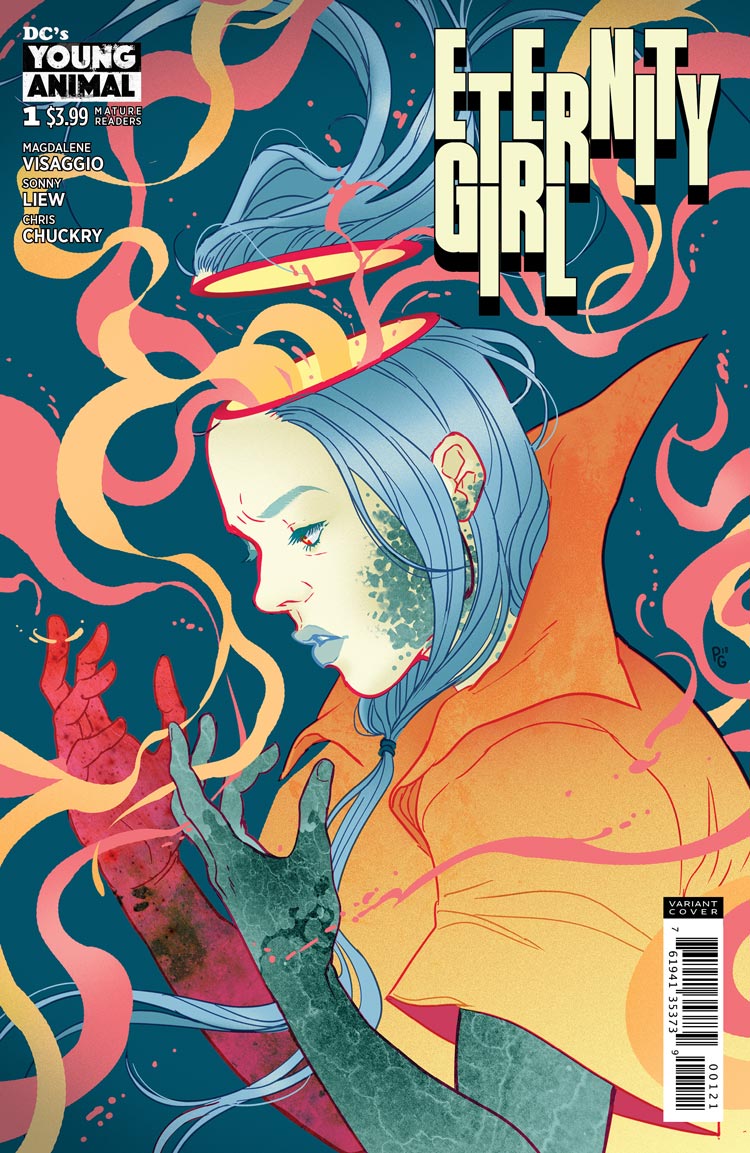 MS: Any final thoughts or inspiration you’d want to share with the Comicosity audience in advance of Eternity Girl #1’s arrival?

SL: I’ll do some shilling and ask readers to pick up Mag’s Kim & Kim, and Eisner-winning The Art of Charlie Chan Hock Chye as well!

Check out Comicosity’s 10/10 review for Wednesday’s Eternity Girl #1 and then hit your comic shop, y’all!