In 2009, artist Dave Wachter and Jim Clark started a webcomic, The Guns of Shadow Valley. In 2013, the pair have started a Kickstarter campaign to finish off the series and release a 200+ pg. graphic novel containing the entire series of work in print. Wachter and Clark were kind enough to discuss the series and the campaign with Comicosity.

Aaron Long: Firstly, congratulations on the success of the campaign so far! You’ve been working on The Guns of Shadow Valley webcomic since 2009. Can you discuss how this series started, and what made now the right time to kick off the Kickstarter to bring it to print? 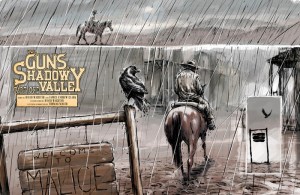 Dave Wachter: Thank you! It started with a simple, and simplistic, genre mash-up idea: superpowers in the Old West. I had that floating in my mind for a few months, thinking about what that could mean. Later, Jim and I were sharing a booth at San Diego Comic Con 2008, we had finished up our first series together, our first series period, a self published book called Scar Tissue. We were discussing what we might do next, and I mentioned this idea to Jim, along with a few very basic concepts that had been bouncing in my brain about scenes and characters. He loved it, and we decided to start working together on it as co-creators, co-writers, and me on art.

Jim Clark: I thought the notion of a western with superpowered gunmen was neat and could see there were some great places to go with it. We fleshed out our ideas for a few months, and when I started seeing how it was coming together visually in Dave’s rough illustrations I knew we were going to have something special on our hands.

DW: We put together a first issue, and a pitch package and shopped it around to publishers. We got some interest, but no deals we were happy with. So, at the suggestion of my friend Bryan Deemer (from Comic Geek Speak) we started thinking about webcomics, and decided to try it out. Hopefully to build an audience and try to bring it to print later as a collected addition. We had nothing to lose.

JC: It seemed like a less expensive alternative to the self-publishing we were used to. And it also allowed us the opportunity to be closer to our readers and get instant feedback as the story progresses. We’re able to see the reactions as people read each page and engage in discussions about what they’re reading. That part is incredibly rewarding. 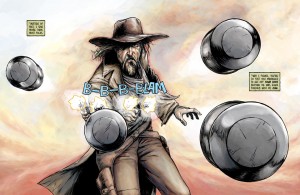 DW: Two years of putting it online one page at a time garnered us a modest but enthusiastic and growing audience. We were nominated for both an Eisner and a Harvey Award, and things were going strong. Once again at San Diego Comic Con, I met Bobby Curnow, a young editor at IDW. It was the same year as the Eisner nomination, and Bobby really liked my work on Guns. I started doing work for them and soon made the transition to a full time comic book artist. Which was awesome, and always a dream of mine since I was 9. But I quickly discovered that I could not keep up with the demands of those deadlines and keep producing pages for Guns of Shadow Valley. Eventually we had to go on hiatus. Which has lasted an agonizing year and half.

JC: I think it was especially hard to go on haitus right smack in the middle of a chapter, too. Especially at the start of an action scene.

DW: Once again at San Diego last year, I told Jim that after the next project (Breath of Bones, Dark Horse, written by Steve Niles, #1 in stores now!), I wanted to do a Kickstarter to get the webcomic back on track. His eyes lit up.

JC: I’d already done a Kickstarter before, so I knew the potential and saw the opportunity to finish what we’d started.

DW: We had talked about it before, but this time we were determined. I let my editors know that I plan on being occupied for the rest of the year, and Jim and I began planning. It was all or nothing. And here we are now, after 5 years of victories, defeats, joys and frustrations, and a lot of hard work, it really looks like this thing is finally going to happen. 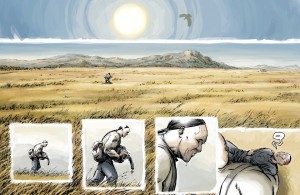 AL: The world of The Guns of Shadow Valley features elements of classic Westerns, superpowers, steampunk and more. Can you discuss balancing these different elements and the characters readers will find in the comic?

JC: I think the important thing is to blend carefully. It’s a western first and foremost, and we have to be careful so that the other themes don’t seem out of place. There’s a lot of research involved to make the wild west aspects seem as realistic as possible, so we have to be careful not to undo that gritty realism too much with the outlandish.

AL: Will The Guns of Shadow Valley be a fully contained story at 200 pages, or do you have plans for future projects in this world?

DW: It is a fully contained story, but will leave a door open for new tales to be told. We’ve got lots of ideas, but right now we’re focussed on completing this story. Whatever happens next is too far in the future to worry about. 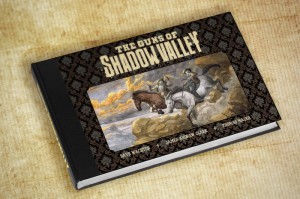 AL: Your pledge rewards range from PDFs all the way to original art. Can you discuss what rewards are available to supporters of the campaign?

JC: The book will be a full-cover, oversized hardcover, over 200 pages, and comes with a beatiful illustrated bookplate designed by Dave that will be signed and numbered with a small sketch by Dave. There are wooden, laser-engraved badges which are fun. Dave is working on a really big, amazing painting in the style of an old movie lobby card poster — that’s available as a print, and the original painting is also up for grabs. Dave is also offering commissions, which are in high demand and almost sold out. There’s some other neat goodies as well, so I encourage you to check it out before they’re gone.

DW: You have to mention the Cameo Appearances! You can be in the book, immortalized in the pages of the story as a cameo walk on character. But there’s only one left as I write this.

AL: Any final words for Comicosity’s readers regarding The Guns of Shadow Valley or any other upcoming projects?

DW: First, a giant thank you to everyone who has pledged and helped to spread the word about the Kickstater. And also to all the awesome folks who have supported and encouraged us through the years. We’re absolutely stunned by this outpouring of trust and faith in us and the project, it’s beyond anything we imagined. It feels mighty fine, let me tell you!

JC: We’re really grateful for the support we’ve received so far, and also excited about what this means for us going forward. We can’t wait to get back to work, and for everyone to see where the story goes. It’s going to be fun.

DW: As far as upcoming projects, as I snuck in before, I have a new series from Dark Horse, the 1st issue hit the shelves this week. It’s called Breath of Bones: A Tale of the Golem, written by Steve Niles. It’s a WWII min-series about a village that makes a giant clay Golem and brings it to life to defend against the Nazis. Also, next week I’ve got a one shot for IDW’s Teenage Mutant Ninja Turtles Villains micro-series, mine is the origin story of the villain Old Hob. I’m really proud of both of these, and hope folks can check them out. After that, it’s nothing but The Guns of Shadow Valley for a while.

The Kickstarter campaign for The Guns of Shadow Valley can be found here: http://www.kickstarter.com/projects/davewachter/the-guns-of-shadow-valley-complete-graphic-novel