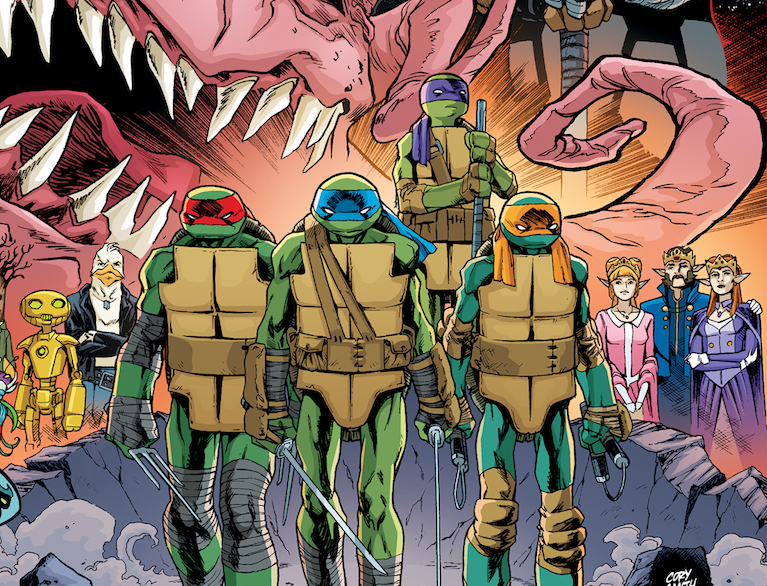 Tomorrow, a beloved franchise hits a landmark issue. The mighty Teenage Mutant Ninja Turtles will hit issue #75 on October 25, a huge achievement these days for any series and a testament to the quality of the series from IDW Publishing. I had the pleasure of asking series writer Tom Waltz and the co-creator of the Turtles, Kevin Eastman, some questions about this landmark, which you can find below: 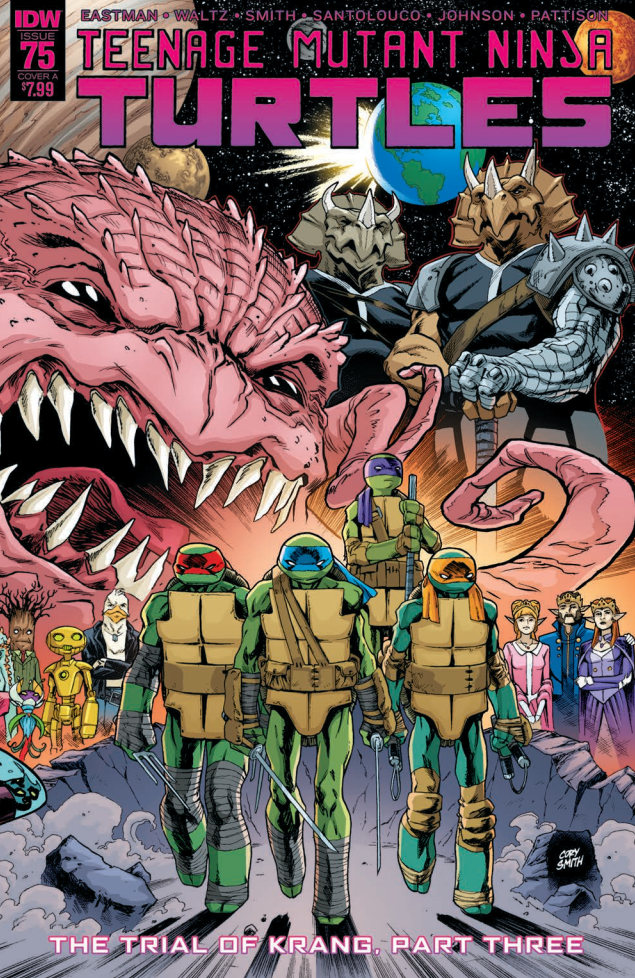 Aaron Long: Right out of the gate, congratulations! 75 issues is a landmark for any comic series, and the timelessness of TMNT is evident with each issue of this awesome series. What is it about the TMNT universe that gives it the depth to be able to craft 75 issues (and more with miniseries and tie-ins) without having to fall back on origin issues or relaunching?

Tom Waltz:  Thank you! It’s been a crazy fun ride so far and I’m really looking forward to more. With such a huge ensemble cast of characters to pull from previous iterations of TMNT (Kevin, Bobby (Curnow, TMNT editor), and I call it “cherry picking”), the story possibilities are truly endless when it comes to this beloved property. But even more than that, I believe it’s the family aspect of the TMNT — and the fact that they are teenagers — that is key to the longevity. The Turtles grow and learn and we grow and learn with them.  It’s an ever-evolving process that never gets boring, is always interesting and surprising, and doesn’t require constant reboots because, in a way, the constant character growth and change is a reboot in and of itself.

Kevin Eastman: I completely agree, from the very beginning, the original concept Tom had for what I call “The IDW TMNT Universe” series six years ago was brilliant – he created a new, fresh, and original foundation that could built upon. As it is a “slightly tweaked” version, it opened the door to bring in, as well as twist and turn ALL of the past characters, but add new characters without having to follow the continuity of any of them, or offending any of them. It’s quite perfect. 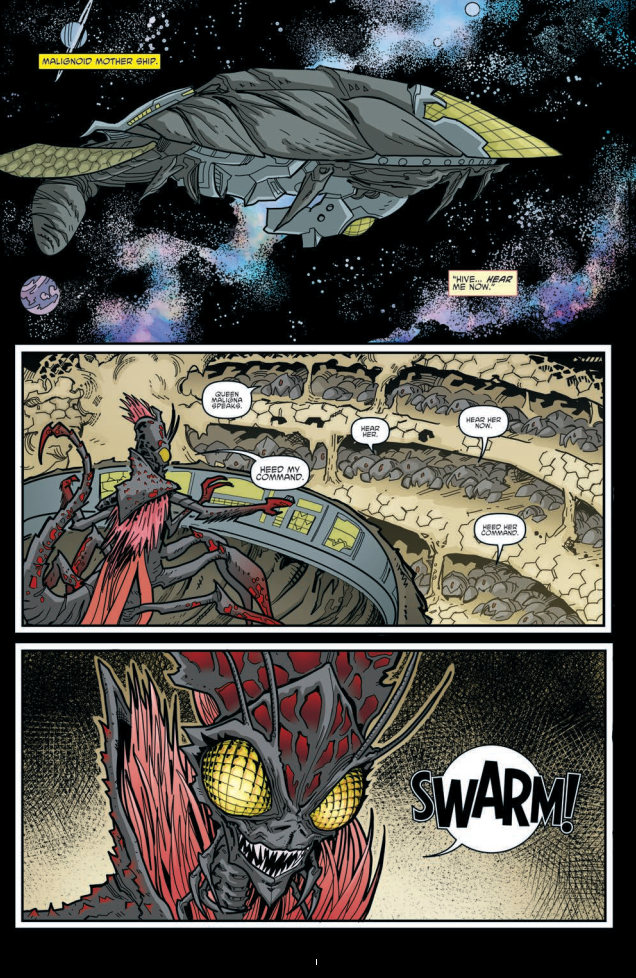 AL: This oversized issue caps off the ‘Trial of Krang’ and kicks off the next phase of this series. What can you tell me about what is on the horizon for the Turtles? Will the focus head back to the City with the conclusion of this extra-dimensional arc?

TW:  Well, it’s no secret now that the solicits have been released that the TMNT will be dealing with a bit of a Triceraton “invasion” following the events of issue #75.  I use quotes because this isn’t your garden-variety invasion — if it can be considered an invasion at all.  There will be confusion and conflict — battle lines will be drawn and strange and unexpected alliances will be formed.  And it’s going to be ACTION-PACKED!

KE: I feel like the approach to each arc is carefully thought out and staged, and this one has been a long time in the making. I am so pumped for the fans to sink their teeth in here… and considering how much action Tom fits into ALL of his scripts, when he says it is ACTION-PACKED – you better buckle up and put on a helmet! This one is off the charts! 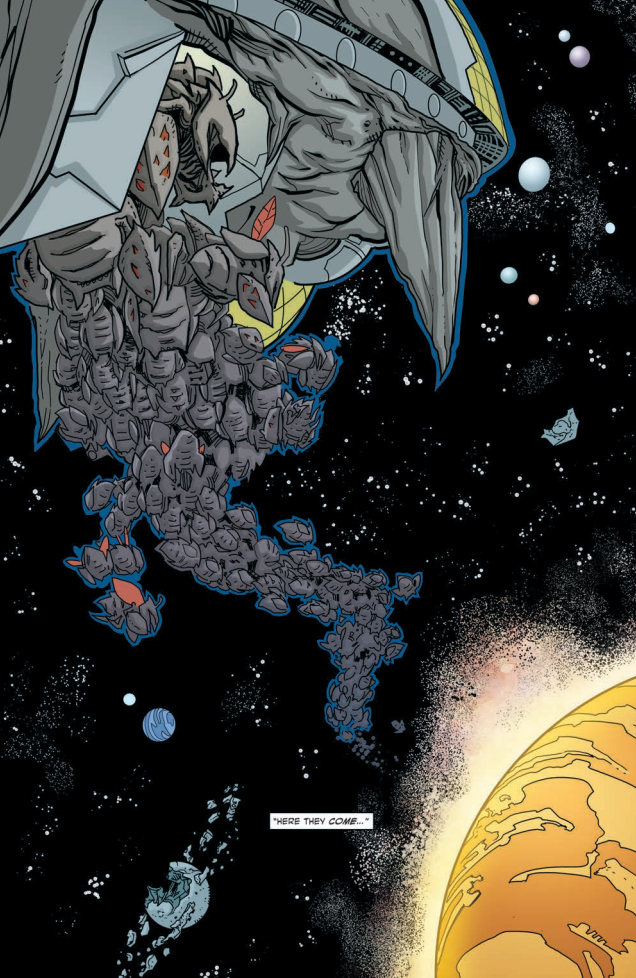 AL: This volume of Teenage Mutant Ninja Turtles is the longest running continuous series of TMNT in comics history. At 75 issues in, I’m guessing (hoping) that plans are afoot for issue 100, as this title rolls along, how far forward are you planning at any given time?

TW: We have plans to 100 for sure, but we’ve got story ideas that could easily take us well past that number if readers and retailers want them.  We hope so, because we love being on this ride with the fans (old and new alike) and the many great comic book stores that support us.

KE: Ditto! From the beginning of the series, the response and support I have seen first-hand from the fans at the fifteen to twenty Conventions I do each year has been over-whelming – and I always thank them for giving us the best job ever, writing and drawing TMNT stories!

I recall when it all first started to come together, we were all thinking, “Man, wouldn’t it be great if we could get a solid two-year run out of the series, there’s some really awesome stories to be told here!”

Then the fans kept with it, and suddenly the build towards issue fifty became an obtainable reality never imagined in the early days – (as well as one of my all-time favorite issues in the series… so far) – now, with the road map to issue one hundred in place I could not be more excited. It’s going to be epic. 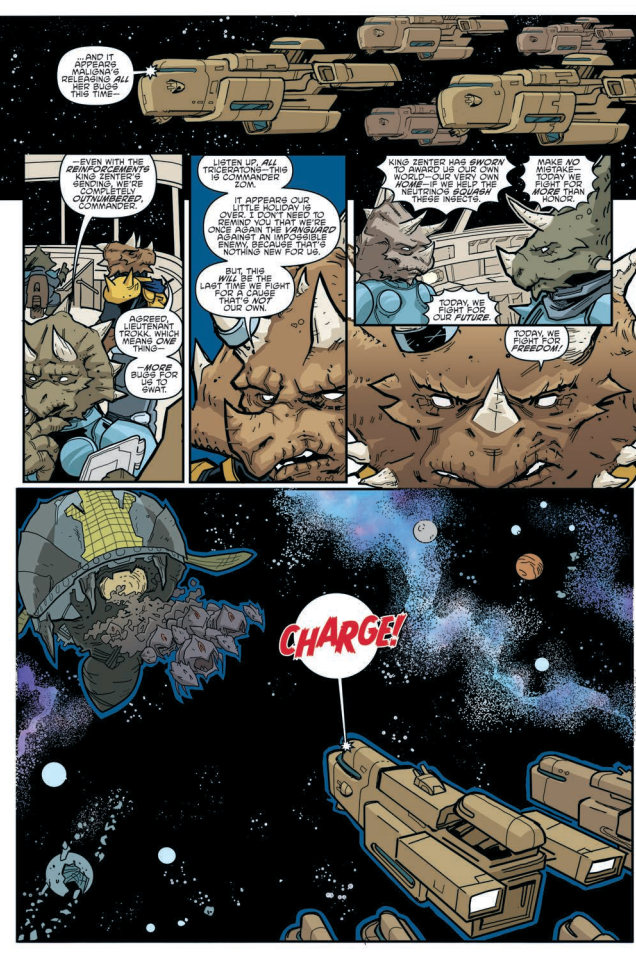 AL: Over the course of 75 issues, so many awesome characters outside the principal cast have appeared, many in significant ways. If you had to pick just one, who is your favorite?

TW:  Gosh, I don’t know if I can pick a favorite.  I love every single character so much (I’m cheesy that way — just ask anyone who works with me).  I do like writing Harold Lilja a lot — he’s such a fun curmudgeon (all credit goes to writer Brian Lynch, who brought Harold into our mythos during his micro-series run).  Most recently, I’ve grown very fond of the mysterious ninja girl named Jennika, who is currently Master Splinter’s right hand and chunin in the Foot Clan.  She was meant to be a one-and-done character but I just couldn’t let her go.

KE: Trust me, I’m desperately trying not taking the easy exit here, but Tom has done such a wonderful job crafting the overall character structure for the IDW TMNT Universe it is nearly impossible to choose! Allowing the Neutrinos to become freedom fighters, Angel to become Nobody, bringing Old Hob into the Turtle-verse, the Mutanimals, Alopex, and Jagwar… so awesome! I’ll tell you what, I’ll single it down to three… Bebop, Rocksteady, and Pigeon Pete are… wait, can I add Slash? Gah! I knew this would be too hard… 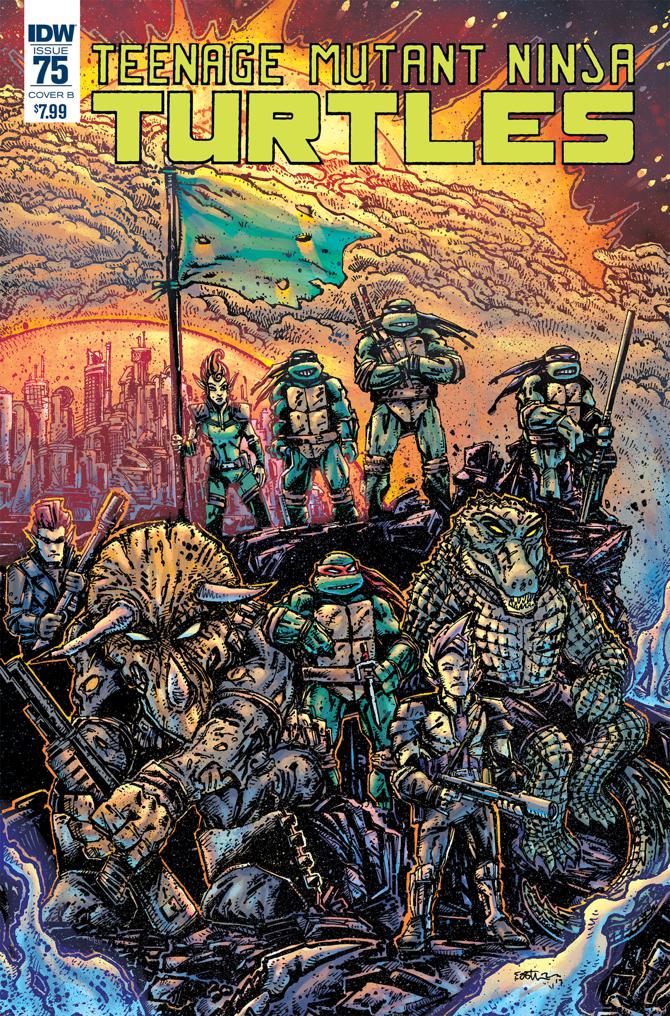 AL: Which Turtle do you identify with most? I am Raphael, without question (the anger…I just totally get the anger….).

TW:  Well, that’s another tough one for me, but I’d have to say that Mikey is closest to my personality.  I’m pretty goofy and an eternal optimist like that rascal, and I love nothing more than to laugh and make people laugh (I’ve never met a bad pun I didn’t cherish).  These days, though, I’ve got a few more years behind me, so Master Splinter is someone I feel very close to and in tune with.  It’s a Dad thing.

KE: Yeah, same goes for me… I feel like being one of the original biological TMNT’s Dads, it is like choosing a favorite child – very hard to do. If forced, I would single out Michelangelo – being the first TMNT I ever drew, but I’ll admit when I want to tell a “Single Turtle Adventure” I lean towards Raphael, I feel like I push and take him places I can’t with the others – especially when I get to team him up with Casey Jones! I also want to make it very clear, at least in my mind – Tom Waltz is not only the official TMNT “Step Dad” but the coolest one as well!

AL: Last thoughts are to you: any final words about Teenage Mutant Ninja Turtles?

TW:  Just that no matter how hard I try, I can never thank our loyal fans and retailers and family and friends enough for your constant support and encouragement over these first six years.  I love and appreciate each and every one of you and promise that Kevin and Bobby and I — and all our wonderful artists — will continue to do our very best to bring you more TMNT stories that are from the heart as long as you’ll have us!  We see this as a family affair — the creators, the fans, the retailers… and of course the Turtles! Cowabunga, dudes!

KE: I am one million percent of the same mind. There are two MAJOR things I always point out at my slideshow presentations and interviews; Thanking the GIANTS I stand on the shoulders of – mainly Jack Kirby who inspired me as a child to follow this dream – And the FANS who have supported me all these years – it is THEY who are responsible for giving me the greatest job ever – every day I get to live out a childhood dream of writing and drawing comics for a living, and I humbly thank you. Lastly, to my partners in crime – the dream team at IDW – these last six years have flown by in the blink of an eye – and has been as enjoyable as it was working with Peter all those years ago – you guys rock!