Having met Kurtis Wiebe and Tyler Jenkins at a comic store signing the day Peter Panzerfaust #1 was released, it is great to check in with the progress of the book and see how such a project develops or falters. Kurtis has joined us on the podcast several times, most recently during the media blitz he and Tyler did to keep the book alive near the end of 2012.

Keith Callbeck: A lot has happened since we had you on We Talk Comics in December. The announcement of the cast and the trailer for the motion comic, the end of the second story arc, the second trade paperback release and a big sales bump. This seems a world away from the announcement that you and Tyler would continue the book “no matter what.” What has the past six months been like for you? 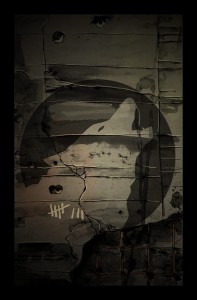 Kurtis Wiebe: Truthfully it’s been an exciting few months. I mean, I was already completely committed to Peter Panzerfaust but with the sudden spike in readership, I’ve been even more driven to make this book the best I possibly can.

KC: Issue 11 opens the 3rd arc. How much time has passed between each of the arcs?

KW: Felix touches on it briefly in this issue, but it’s been over a year since their encounter with Hook on the rooftop at Fontainebleau. In that time, Peter and crew have moved to their new home in The Sticks, which is touched on in Issue #10 as the base of operations for the Braves resistance cell. They’ve been training and have even completed a couple of missions. So, while it’s the same group of characters everyone’s been reading they’re older and have some war experience under their belt.

KC: When we first met the cast they were running from the war, the second arc they were standing their ground and trying to rescue their friend. What’s the next step?

KW: Now they take the war to the Germans. As I mentioned earlier, Peter and the Lost Boys have already done so at the outset of our third arc. The next five issues are much more action focused than the previous ten issues. This is going to be very reminiscent of films like Bridge Over the River Kwai and Guns of Navarone. Sabotage and infiltration missions where each of the team members brings a special skill set to the job. I’d debated showing that part of the story, but I think the real interesting part will be seeing them in action. Seeing how they’ve grown in the past year.

KC: We saw a big change in style from arc 1 to 2 when it changed narrators. What can we expect in this Felix’s story?

KW: Felix is as different to Julien as Julien was to Gilbert. I think the key difference is that, unlike Julien and Gilbert, Felix has no desire to go back to that time in his mind. He’s put that part of his life far behind him and locked it all away. So, when John Parson’s contacts him, he’s not exactly the most willing of subjects. That hesitancy and matter of factness plays heavily into the flashbacks and, most importantly, we learn why from the very beginning Felix has been a bit of a loose cannon. I said it from the very beginning that there was a reason for his cold heartedness, and readers will finally understand why. 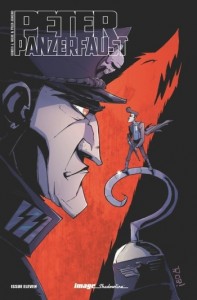 KC: How do you approach writing the change of voice in each arc? Is it organic or is it a conscious change of style?

KW: It’s a mix of both, but it’s actually tied into how the characters have developed naturally through the story as I’ve written it. Some of the characters have taken on a bit of a different voice than I’d expected from the outset, so that plays into it. But, I’ve also planned out these characters since the beginning. I wrote out their motivations, what drives them and also what plans I have for them down the road.

KC: We open issue #11 with seven nearly wordless pages. Why this choice?

KW: It’s very much a conscious decision as part of relaying the characterization of Felix. Quiet. Somber. Thoughtful. I think that the immediate jump to then seeing him in the present is the perfect parallel for who he is. I’d debated adding some dialog to the pages but it never felt right.

KC: How much research goes into the writing? What sources are you drawing from for the world Peter and his friends are living in?

KW: I’ve done most of my research for the overall story at this point but whenever I move locations or the period of time shifts, I do more reading for either that specific place or, as far as time is concerned, look for interesting bits of information from around that period. The war was a very different beast from June 1940 when the series began to December 1941 which is when Issue #11 begins.

And, as always, I’m drawing from Barrie’s novel. It’s my main resource for drawing out themes and parallels from the novel and weaving them into the narrative of Peter Panzerfaust.

KC: You teased on Twitter the possibility of a spinoff story. Are you starting to think outside of the 25 issues?

KW: Peter Panzerfaust will already be more than 25 issues, and then when that wraps we are considering doing more. I was pretty serious about that Tiger Lily spin-off. She’s far and away my favourite character to write and it could be fun to do a 5 issue series about her exploits that happen off camera.

KC: Thank you so much for your time, Kurtis.

Issue #11 of Peter Panzerfaust is released by Image on June 12. Trade paperbacks 1 & 2 collecting the first 10 issues are available now.

Keith is co-host of the podcast We Talk Comics.