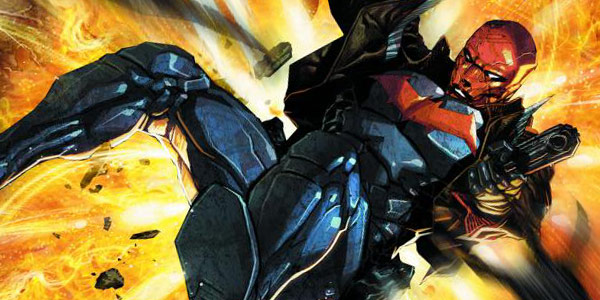 Few books have been as controversial — or as fun — as DC’s Red Hood and the Outlaws, a monthly team-up of loner characters Jason Todd (Red Hood), Roy Harper (Arsenal), and Koriand’r (Starfire). With last week’s issue #29, this ragtag group has a new leader in the form of writer Wil Pfeifer, alumnus of such classic titles as Catwoman and H.E.R.O. for DC Comics. Pfiefer returns to the halls of DC and sat down to answer a few burning questions for us on each member of the team, what their generation has to offer the universe, and where they will be going from here! 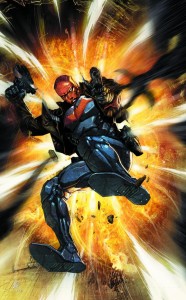 Matt Santori: Welcome back to the halls of DC Comics, Will, and thanks so much for talking to us! It’s been about 5 years since your last series with DC. How does it feel to be returning amidst an entirely new continuity?

Will Pfeifer: It’s fascinating. Usually, when you’ve been away for years, when you get back everyone — including yourself — is noticeably older. This time around, with the new continuity of the New 52, everyone has someone gotten younger. Except me, of course. Turns out I’m the one with more gray hair. The fun part of the transition is that I’ve got a whole new universe to explore and play in. That’s an exciting thing for a writer.

MSG: Red Hood and the Outlaws has been the quintessential buddy book for the New 52. What are your first impressions about why Jason, Kori and Roy fit so well together?

WP: What makes these three such interesting characters to write is that, while they have in common the fact that none of them quite fits in with the rest of the DCU, they’re all very different in personality and temperament. Kori’s a free spirit whose zest for life conceals a very, very dark past. Jason’s past is pretty damned dark, too, what with him having been killed by the Joker and all that entails, but he’s taking his trauma-driven energy in another direction and honed his skills as an assassin, a combatant and detective. And Roy is sort of the odd man out, even in a group like this. He’s arguably the smartest and, surprisingly, the deep thinker of the group (well, sort of) who still worries he might be outclassed by a super-powered space princess and a world-class fighter.

MSG: Roy Harper’s past has remained somewhat shadowy to date, but in #29 we see a side of Arsenal we haven’t seen in a while: scientist. Why was this a direction you wanted to play up for Roy and how does it flesh out his character, in your mind?

WP: Yeah, it’s been established that Roy is a master technician and weapons maker, and anyone who can sit alone in a lab for hours on end tinkering with nanotechnology must have a real knack — and a real love — for science. In the world we live in, with 3D printer technology and countless blogs devoted to the glories of home-brewed technology, it seemed natural to pair up his offbeat personality with an equally offbeat pursuit of knowledge. 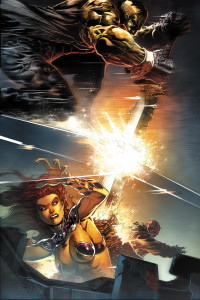 MSG: Koriand’r has been a really controversial figure since the launch of the New 52. What are your thoughts on her character, how she interacts with much less-sexualized castmates, and how her origins off-planet might play into your first storyline?

WP: Listen, I grew up reading the original Wolfman and Perez New Teen Titans when I was just a teenager (told you I was old), so I can see the appeal of Kori as a character with a healthy sense of her own sexuality. That being said, I don’t want her to be seen as a one-trick-pony, someone who’s always used as the punchline in some sort of naughty joke. Without a doubt she’s the most purely powerful character of the trio, with the sort of natural weapons that could take out either Roy or Jason without a whole lot of effort. And when you combine those qualities with her ability to remember her past while looking ahead to what, she hopes, is a brighter future, you’ve got an interesting, complex character. In the first pages of our first issue, she’s enjoying the ocean and wondering why Jason can’t do the same thing. To me, that combination of innocence and wisdom sums up Kori in a nutshell.

MSG: Jason Todd has been a lot less tortured as a character over the last two years, but still lives to some degree in the shadow of the bat. What do you think defines him as a hero that makes him stand out among (even former) agents of the Batman?

WP: I think it’s the fact that, more than anyone else, he’s done the most to escape that ominously wide-reaching shadow. He still has a connection to Batman, as we’ve seen in previous issues, but he’s his own guy, and the days of Robin the Boy Wonder are far, far behind him. In some ways, he’s gone into much darker territory than even Batman has journeyed (which is saying something), but I think at the heart of Jason you’ve still got a sense that there’s a little kid who sees it all as a big adventure. Balancing that fragile innocence with the more unsettling aspects of his personality is where it gets tricky — and interesting. 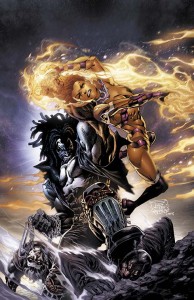 MSG: The threats the Outlaws have faced to date have always been a little out of scale for their ragtag nature, but this new one seems positively massive! What was your motivation to take the team off-earth and up against a planet level threat?

WP: I just thought it would be fun to take our heroes out of their element — way out of their element, in fact — and pit them against a team of opponents who, in their own way, are just as screwed up as Kori, Jason and Roy. The aliens they meet in issue 29 are not brilliant tacticians or super-advanced invaders; they’re just a group of ne’er do wells looking to have some fun while they steal some advanced technology, namely the ship that belongs to our heroes. Giving these not-too-bright aliens the ability to destroy planets just for laughs seemed like just the thing to up the ante and make things that much more fun.

MSG: With the current Teen Titans back to being a first generation team, characters like Roy and Kori have something of a nebulous past with their contemporary Nightwing (and maybe Cyborg) as well. In general, how do you see this generation of hero fitting in against both the Titans and the Justice League in the overall universe?

WP: Roy, Jason and Kori are stuck in the middle, and it can be a pretty awkward place to be. On the one hand, they’re not at the level of the Justice League, either when it comes to the opinion the general public haves of them or the level of threats they deal with. But they’re older and more experienced than the Titans, and they can’t afford to make the same sort of mistakes the younger group could get away with. Of course, that doesn’t mean our heroes don’t make mistakes — it’s just that the consequences are greater when they do. And, in case you’re wondering, they do make mistakes — and plenty of them — in this story arc.

MSG: Any final thoughts or special teases you can share with the Comicosity audience?

WP: Just to say that my goal with Red Hood and the Outlaws is to deliver a fun reading experience. There’s a place for angst, and there’s a place for grim and gritty, but what I wanted to do in these first three issues is deliver the sort of rollercoaster ride that I like to read — and write. Something that starts with high-speed craziness and just cranks things up from there. Superheroes, aliens, monsters, spaceships and fight scenes. Lots and lots of fight scenes. What the hell else could you possibly want in a comic book?

Red Hood and the Outlaws, written by Will Pfeifer, ships monthly from DC Comics, with his first issue #29 in stores now!