Get ready to enter a psychedelic world like you have never seen before. Writer Curt Pires has teamed with artist Ramon Villalobos to tell the tale of F., a man of wild popularity and wild habits. Pires recently took time to discuss his work with Comicosity and what readers can expect from LP.

Aaron Long: Straight from the architect’s mouth: how would you describe LP? Have you been developing the title for a long time? 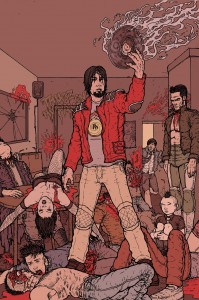 Curt Pires: LP is the comic equivalent of a big bold pop single. It’s like when you’re favorite band drops the first single off their new record and you listen to it on a loop for days. You absorb it (last song that did this for me was the recently released TEENAGE ICON by the vaccines) . That’s really what me and Ramon were shooting for with this. We want it to be a comic you come back to . Something you’re going to re-read, comb through , figure out the little things, something you can keep pulling stuff out of .
I was really inspired by lots of European work , and the DARROW/MILLER stuff that they did over at Darkhorse in the 90s . Not being afraid of showing off that one page spread, finding ways to break down narrative flow. I just wanted to make a comic, that would make my head explode if I picked it off the shelf.

Story wise, the comic tells the story of F . F is sort of this international megastar musician who stumbles onto a record with mystical properties and his life seems to stumble wildly out of control

The comic has been in development for a while. I wrote the script around Christmas time last December. Ramon started in on art around June , we had the book up and lettered in a matter of days after we had wrapped colors.

AL: The title character, F, appears to be both a mega star and a junkie loser. What makes up F’s character? What drives him throughout LP?

CP: The thing about F is he is really a bit of a contradiction.  He has obscene amounts of fame, women, plays stadium shows, but he doesn’t seem at all to be happy or satisfied.  He’s overwhelmed by it all.  Which I think is something we can all on some level relate to. He sees this circus that is his life , and he wonders what the hell happens when this comes to a stop ? What are we going to do when were 80? Are we going to be just drooling IV fed patients overdosing on MTV and hard drugs? He doesn’t see any ending to his story, and I think it’s this nihilism, this desire to numb himself to all of it that really drives him in LP. 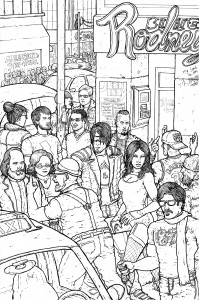 AL: How did Ramon Villalobos get involved with the project?

CP: I had stumbled onto Ramon’s stellar art a while back when Rich Johnston ran a feature over on bleeding cool about him.  I remember having like this HOLY SHIT moment in the hotel room I was in . I spent some time combing through his deviant art and just geeking out.  We got in contact about possibly working together , and found out that we were both huge Grant Morrison fans.  Let’s put it this way, I have one piece of art hanging over my desk and it’s a piece Ramon did for me based off of Grant’s thumbnails for a batman cover.  Anyways, we were trying to find the right project to work on , and once I finished LP I sent him the script and he dug it.  Ramon is a remarkable talent , and I am happy to call him both a collaborator and a friend.

AL: How can prospective readers get their hands on LP?

CP: LP goes on sale September 26th from finer retailers in North America.  Head over to lpcomic.tumblr.com, for a full list of retailers, content, and more.  So far we’ve announced three of the retailers. We’ll be rolling out more announcements as we get closer to the date. We’re always looking for more retailers do carry the book, so any retailers that want to stock the book can contact me via email (curtpires@gmail.com) and order the book. I’ll also be at FAN EXPO in Toronto selling copies at my table A184.

AL: Any final words for Comicosity’s readers for LP?

CP: Keep your eyes out for LP on the 26th .  My next project gets announced via the back cover of LP, also. I’m working with a very talented collaborator and can’t wait for people to go eyes on with this.

I would also recommend that people check out rad books like , Brandon Graham’s PROPHET, Ryan Ferrier’s THE BROTHERS JAMES ,and ALES KOT and Riley Rossmo’s WILD CHILDREN. Those books are crazy inspiring.