Earlier this year it was announced that Dark Horse Comics would be relaunching Ghost with the all-star creative team of Kelly Sue DeConnick and Phil Noto. Recently, at Emerald City Comic-Con the publisher announced it has upgraded the series to an ongoing book, starting with issue #0 in September. Writer Kelly Sue DeConnick took time out of her schedule to talk Ghost, how the title came to be, and her thoughts on relaunching the book. 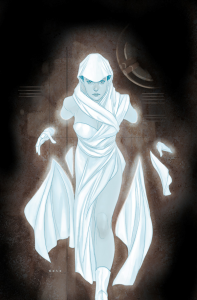 Aaron Long: Let’s start at the very beginning…How did you get attached to the Ghost project?

Kelly Sue DeConnick: I got an incredibly enthusiastic email from Patrick Thorpe, the editor. He got my attention with his passion for the project.

AL: What drew you to this title & character?

KSD: Again, Patrick. I was familiar with the title in a cursory way — I knew the iconic Adam Hughes design — but it was Patrick’s vision that got me on board and got me to go down the rabbit hole of reading the entirety of the previous run.

And then I was hooked.

AL: Will your work on Ghost be a continuation where the series left off or will this be a fresh start for the character?

AL: This rendition of Ghost will be set in the real-world city of Chicago rather than the fictional city of Arcadia. What went into the decision of writing Ghost into a real city rather than a fictional one?

KSD: Man… we went back and forth on this one quite a bit. It got as far as me starting to put together a map of another fictional city. And then the pendulum swung back and I started to feel like i wanted to ground the book in the real world. I found one particular bit of Chicago “color” that nailed it for me. I started to feel like it was “meant to be.”

AL: Any final words to Comicosity’s readers regarding Ghost?