The truth is out there….yes, that line has been used…but, y’know what? Sometimes it just fits. With Michael Moreci and Steve Seeley’s Hoax Hunters, it fits perfectly. Hoax Hunters focuses on myths that well, aren’t. The terrors that are actually out there are more dangerous than you’d expect and the Hoax Hunters are there to make sure they don’t overstep their bounds. Co-Writer Michael Moreci  took time to discuss how the series came to be, who the characters are and what you can expect from Hoax Hunters.

Aaron Long: This series isn’t the first appearances of the Hoax Hunters, you had a stint as backup stories in Hack/Slash… do you remember how the concept for the series was developed? 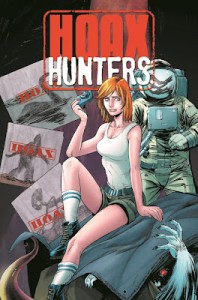 Michael Moreci: Did you ever here those stories about musicians working in the studios for weeks on end, trying cobble together an album, then one day—poof!—inspiration strikes and they record their biggest hit in fifteen minutes? That’s kind of the story behind Hoax Hunters.

Steve and I had both been banging our heads against the wall, trying to get projects off the ground, individually and together. Personally, I’d been writing comics for a number of years up until the inception of Hoax Hunters, but had yet to catch my “break.” Tim (Seeley) offered us the backup slot in Hack/Slash, and we literally had about a month to produce a workable comics story. It was only three pages, sure, but we had nothing, no story, no creative team.

Not to be deterred, Steve and I got right to work. The foundation of the series rested in Steve’s creation, Murder, and mine, Ken Cadaver. Somehow we got to talking about out affinity for reality television shows in the vein of Fact or Faked, Mythbusters, etc. And, I don’t know, in the manic rush to build a story, Hoax Hunters was born.

Luckily, after running the first installment, we had a little bit of time to catch our breath and say, “okay, what now?” We treated the backup run like a monthly series, spending countless hours building our universe—character bios, mythology, histories, future hoaxes, everything. We never really took our foot off the gas, even though we had no idea whether we’d get an opportunity to tell more Hoax Hunters stories or not. Fortunately, that devotion paid off, and we’re adequately equipped to manage an ongoing series.

AL: Jack, Regan & Ken are unique individuals, to say the least. Straight from the architect’s mouths, how would you describe these characters? What drives them through the series?

MM: Here’s the breakdowns I’ve just written (which will likely appear on the inside front cover of future Hoax Hunters issues)—they’re crafted to explain the basics of the characters without giving away too much info:

The leader of the Hoax Hunters, Jack Lawson is a highly-trained former FBI agent. Jack’s father also was a Hoax Hunters, and that history brought into the organization.

Regan Tate was a rising child actress who obtained stardom after suffering a demonic possession on the set of what became her final film. The experience left her with unusual powers.

Murder was an American astronaut who underwent a metamorphis when he encountered an energy right in space. His human consciousness is now shared with crows.

A former NASA scientist, Ken Cadaver was the unwitting subject to reanimation technology—technology he developed. He survives on his brain activity, which also gives him telepathic abilities.

As for what drives them through the series, I think what we’ll come to find are individuals who, for one thing, because of their unusual circumstances, have nowhere else to go. Not only that, they’re bound together by a culture of secrets and lies—they themselves are all living lies. It’s important to see how that’s essential to their characters, that part of the lies they regularly conceal is who they are. And that’s what keeps them going—it’s out of necessity more or less. They understand a normal life with intimate relationships is impossible for them, and they also see the necessity of what they’re doing. The Hoax Hunters protects the world—maybe even saves it.

AL: How did Axel Medellin become involved with the series?

MM: Pretty simple: we asked him! I know it sounds like a no-brainer but, from my experience, you never have that kind of luck finding an artist. When JM had to step down, Steve and I created a wish list of potential artists that would work for the type of story we wanted to tell. At the very top of that list was Axel—he was the first (and only) person we asked to step in as the full-time Hoax Hunters artist.

Steve and I had both just finished reading 50 Girls 50, which showed us not only how skilled Axel is, but how perfect he was for Hoax Hunters. He drew ridiculously bad ass monsters, and his character work is phenomenal. So we pursued him—which basically means we sent him an email. As luck would have it, he responded and loved what we were doing with Hoax Hunters. We were able to agree to terms we were both happy with, and after a few issues, I think I can safely say that both Steve and I couldn’t be more thrilled to be working with Axel. He’s immensely talented, hard-working, and a great guy. We’re very fortunate.

AL: With any ongoing that is relatively new I’m always curious to know if the writers have an endpoint already defined. With issue #2 about to hit stores, do you know how the series will end?

MM: That’s a great question, because I always think there’s that reader trepidation of, “do they [the creators] actually know where this is all leading?” LOST ushered in the era of serialized, cerebral mysteries, but kind of killed it as well—no one wants to get burned like that again.

That being said, I can reveal this: We have a point that the story is heading towards. A definite, epic point. Now, there will be some pit stops along the way; our format is mythology mixed with freak-of-the-week weirdness. But, as for this particular narrative point, it’s going to take us at least 20+ issues to get there. So along the way, we may figure out a way to continue the story beyond this point—in fact, I already have some ideas. For the time being, though, that’s what we’re working towards. It may be an end point, maybe not; at the very least, it’ll be an enormous game-changer for the Hoax Hunters universe. 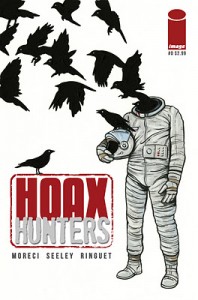 AL: I have to ask….who/what the hell is the astronaut?

MM: Haha…we get asked that all the time. We covered his origins in issue #0, to a degree, but there’s still more Murder story to tell. Basically, Murder was an astronaut back in NASA’s heyday. He was sent on a secret ops mission to spy on alleged Russian space activity. On this mission, he encounters an energy rift in the universe. Unfortunately for the astronaut soon-to-become-Murder, there was a crow on board his spacecraft; when the craft hit the energy rift, the astronaut melded consciousness with the crow, thus forming Murder. He was lost in limbo until the energy rift was again opened, in present day.

AL: Any final words for Comicosity’s readers regarding Hoax Hunters?

MM: I’d say just your typical boilerplate urging to ask you LCS to order and stock the book. Honestly—and I’m not trying to inflate the book’s popularity—but we’ve had numerous reports of retailers selling out of issue #0 and #1 on the first day. And while this is great on the surface, what it means is that anyone who went to those shops on Thursday or beyond got turned away empty-handed. Those are all readers lost. What this means is retailers are, in some cases, under-ordering. And I get it—it’s a new book from unproven creators. But that’s why you have to tell them you want the book, so they’ll have more confidence in stocking it.

Other than that, I really want to stress how unique Hoax Hunters is. We’ve gotten stellar reviews (which you can see some collected here http://hoaxhunterscomic.blogspot.com/2012/07/not-convinced.html) and I think what is striking a chord with people is the freshness of what we’re doing. It’s not a superhero story, there are no zombies, no assassins, no over the top violence. We’re striving to make something smart, fun and, again, unique.