Writer Sam Humphries has blown readers minds with his new series Higher Earth, but what is in store for the next arc? Where is Rex going, and what the hell is he trying to do when he gets there? Humphries knows, and took time out of his schedule to let us in on all the Higher Earth secrets. 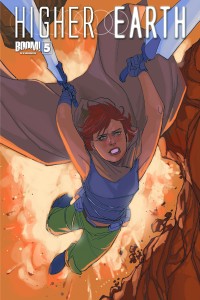 Aaron Long: Higher Earth is a pretty wild concept, with the different stacked Earths and class structure. Can you discuss how you developed the concept? Had the idea been kicking around in your head for awhile before the BOOM! series started up?

Sam Humphries: I developed the concept by burning Prince’s jacket from Purple Rain and inhaling the smoke. When I woke up, I was splayed across the sidewalk of Hollywood Boulevard with the script for the first hundred issues of Higher Earth.

AL: In just a few issues, Heidi and Rex have been to some wild places. Can you describe what challenges and locales they’ll be heading to in the next arc?

SH: I love maps and I love the map that Dylan Todd designed for us in issue 4. I can say that every single Earth that Rex and Heidi will confront in the next arc is labeled on that map. Lots of clues on those two pages…

Generally speaking, Rex has made his intent clear, he’s going right after Higher Earth. And Rex is not a guy who fucks around.

AL: Rex is a guy with a pretty deep past, and, from the sounds of things, maybe an ugly one. Will all of Rex’s secrets be revealed with time? Or will we ever really know all that makes him who he is? 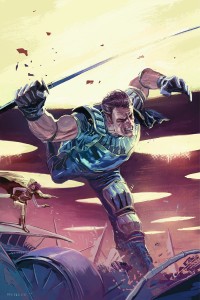 SH: Can you ever really know ALL of any one person’s secrets? Rex is a guy that has more than one big, ugly secret. There’s one that relates directly to Heidi, and that’s going to come into play in the second arc.

AL: Joe Eisma joins the series as a guest artist for issue #5, how did he get involved with the first issue of the new arc?

SH: Joe and I have a two-man mutual admiration back patting society. We’ve talked about teaming up together for a long, long time, and this one just worked. Not only is it a perfect match for Joe’s exceptional talents, but it fit within his busy Morning Glories schedule.

AL: The fifth issue of the series drops in a few days, but I have to ask you this…do you know how and when Higher Earth will end?

AL: Any final words for Comicosity’s readers regarding Higher Earth?

SH: Keep your eyes on Koothka.