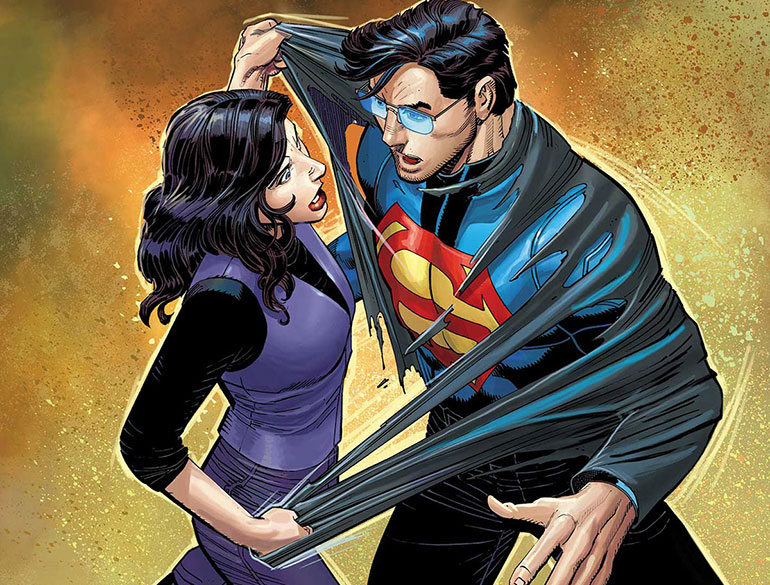 He’s the world’s first super-hero, and there’s few things that have never been done with him. Superman has lost his parents, kept his parents, lost them again. He’s dated a mermaid, watched his high school sweetheart battle it out with his girlfriend, marry the woman of his dreams, and have that all change as well. But this spring, Superman finally faced an enemy that he couldn’t vanquish.

Joining legendary artist John Romita, Jr. to tell the tale of how Clark Kent’s secret identity got revealed to the world — and Lois Lane’s part to play in it — is Eisner award-winning writer Gene Luen Yang. Both gentlemen sat down with Comicosity in advance of this week’s issue #42 to discuss their take on the Man of Steel, the role Lois Lane plays in his life today, and what it’s like to deliver something new to Superman after 77 years. 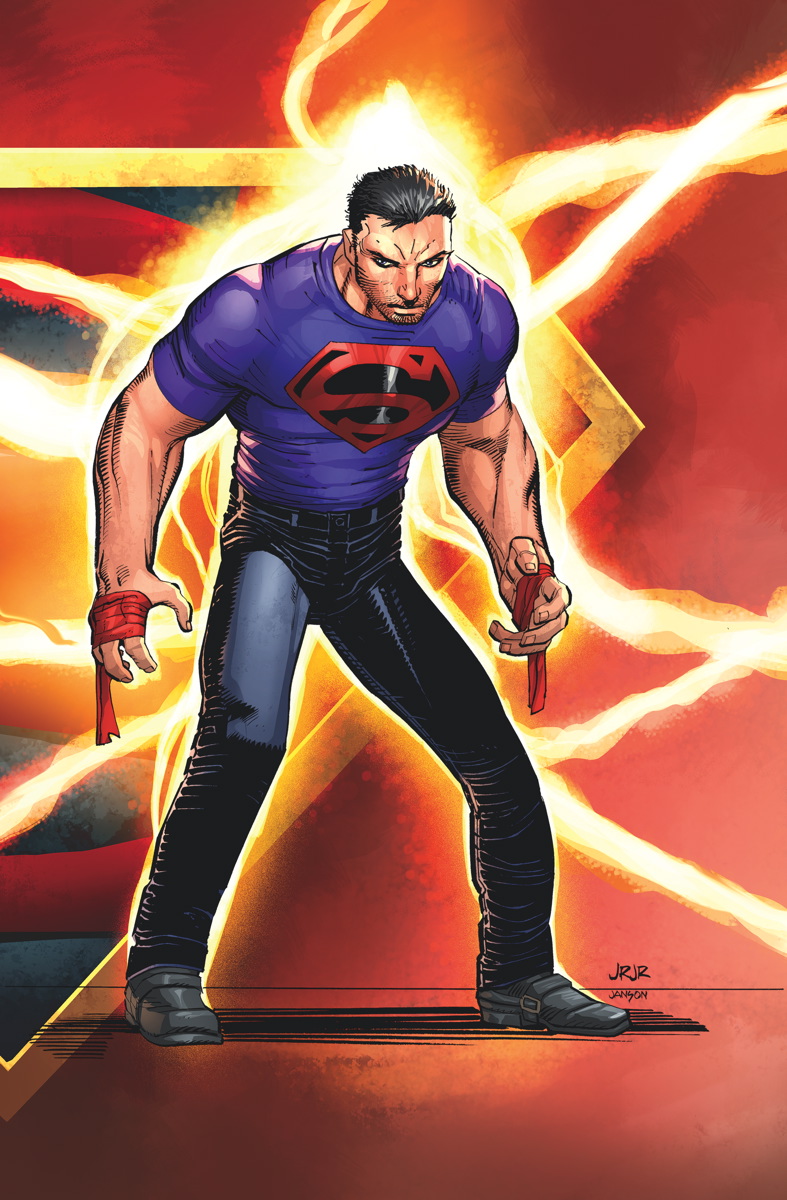 Matt Santori: Gene, you’ve had one issue hit the stands so far, with a little bit extra on Free Comic Book Day. What did Superman mean to you coming into this story and how is that evolving for you?

Gene Luen Yang: First, it’s incredibly intimidating. It’s one of those offers that you just can’t turn down. Writing the very first super-hero. But it is intimidating because of the legacy of the character and all the amazing talents that have made him who he is today.

One of the things I’ve realized is that because he’s such an old character — he’s gone through lots of different phases and eras — he’s actually fairly flexible. Just as artists and writers have emphasized different parts of who he is, what I wanted to do was find something in his identity I could resonate with. For me, one of the things I like so much about Superman is he’s not just the prototypical super-hero. He’s also the prototypical immigrant. He embodies the whole identity of a lot of immigrants to the United States. He has two different names, two different cultures. He has to balance two different sets of expectations.

In our current storyline, what we’re doing is breaking down the wall between those two halves. By exposing his secret identity, he’s going to have to figure out how to merge those two halves together and deal with both of them at once.

MSG: And John, you’ve been on the book for a fair bit, having worked with Geoff Johns on your first arc. How is working with Gene today different than how it was when you first joined the book and where is your head at in regards to Superman? 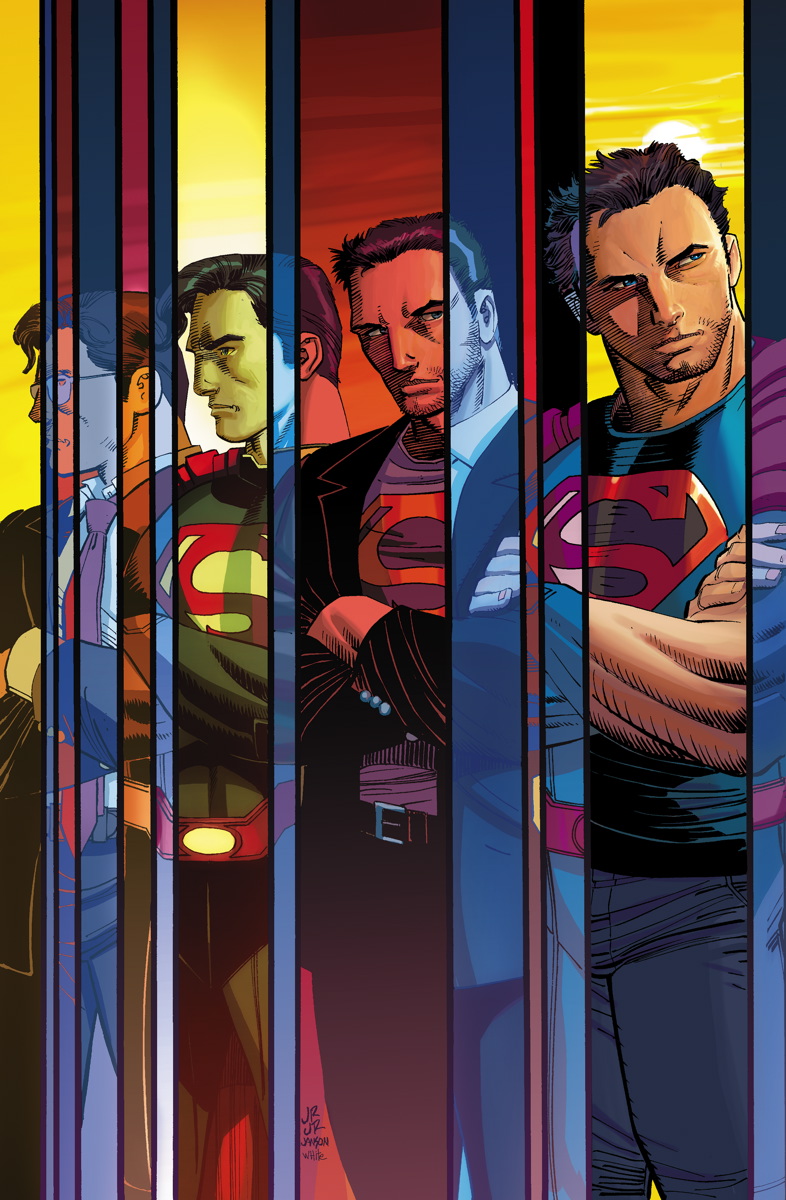 John Romita, Jr.: Interestingly enough, working with a “new” writer has the same kind of feeling-out process as when I first started on the title. It takes a certain number of issues to get comfortable. Same with Gene. He’ll get comfortable with me, with what I can do, and we’ll find a happy middle ground.

It’s not so much different as working with Geoff Johns as it is getting back to the same feeling of learning about each other. And challenging. And Gene is challenging because he’s different, as I probably am to him too. That’s the best thing about working with a partner on a book: over time, you get better and better.

Speaking of that, I’m just realizing that it’s taken 12 issues, but I’m feeling more comfortable with the character and I’m doing things that I haven’t done before. It’s a nice feeling. I’m suddenly getting more attached to the character, where it was a challenge before.

And you know, the more different Superman can be, the better. When you have a character this old and legendary, something new and different needs to be tried. Everybody tries to do something and it doesn’t always succeed. But I think we’re succeeding with it.

The new power has led to some great stories. Even changing the haircut. Anything different from what he was before and what he looked like before, I’m absolutely for it. But what makes it easier for me is just the repetition. But the new look is the enjoyable part, as well as having his personality be a little different from before.

Ironically, I thought the character was kind of bland, but a lot of us are working to change that. I don’t think of that as something negative — he’s the ultimate boy scout. But the new power has changed him in many ways. He’s actually a little more short-tempered. He’s tasted beer for the first time in eternity. All of these little alterations that bring him down to earth are the changes that I enjoy.

MSG: That’s true. All the other books are forward in time, but you’re actually showing the progression from one place to another — including this significant shift in his personality. 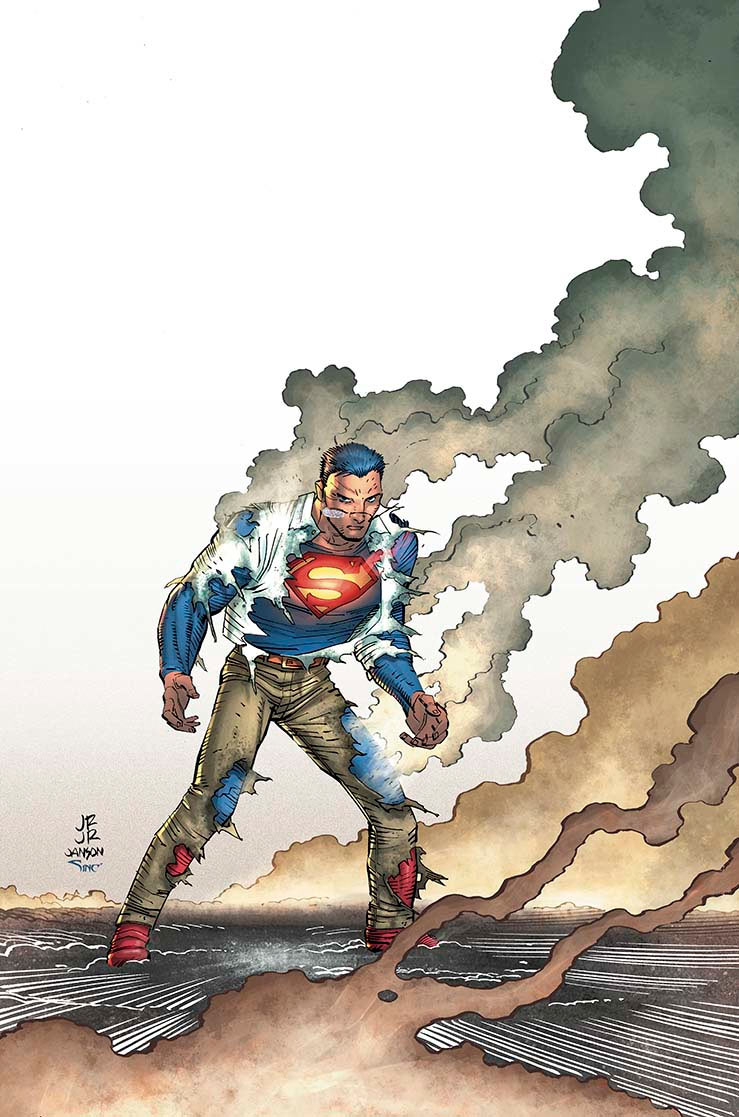 GLY: Superman is used to having these sort of god-like powers, and when you are that powerful, there’s a privilege that comes with that. There are things that Batman has picked up that Superman hasn’t, because he’s never had these sort of powers. As Superman loses his powers, it affects the way he interacts with the world. There are things he’s taken for granted that he won’t be able to anymore. That’s what we’re hitting on.

MSG: I want to shift gears just a little bit and talk about what Lois Lane means to each of you as well, given that she plays a major role in this story.

GLY: When I got the gig, I went back and read the first issues of Action Comics and Superman, and I realized that all the pieces of who Lois Lane is have been there since the beginning. She wasn’t a response to a women’s lib movement. She was a character well ahead of her time. She was always hard-nosed, a competitor to Clark Kent as a reporter, and also his companion and partner. And there was always this tension.

I’ve heard Lois Lane described as “Superman’s Superman.” Even though she doesn’t have any super-powers, she has that gutsiness that Superman has.

I think that’s what I want to go for and stay true to. Obviously, in the current book, they’re not romantically engaged with one another, but there’s still this tension between them. It’s a mix of romance and competition, but also this deep true love. But she does have these two competing commitments as well. She has her commitment to Clark as a friend, and she has the commitment to truth as a reporter. So, we’ll play with that tension a little bit. 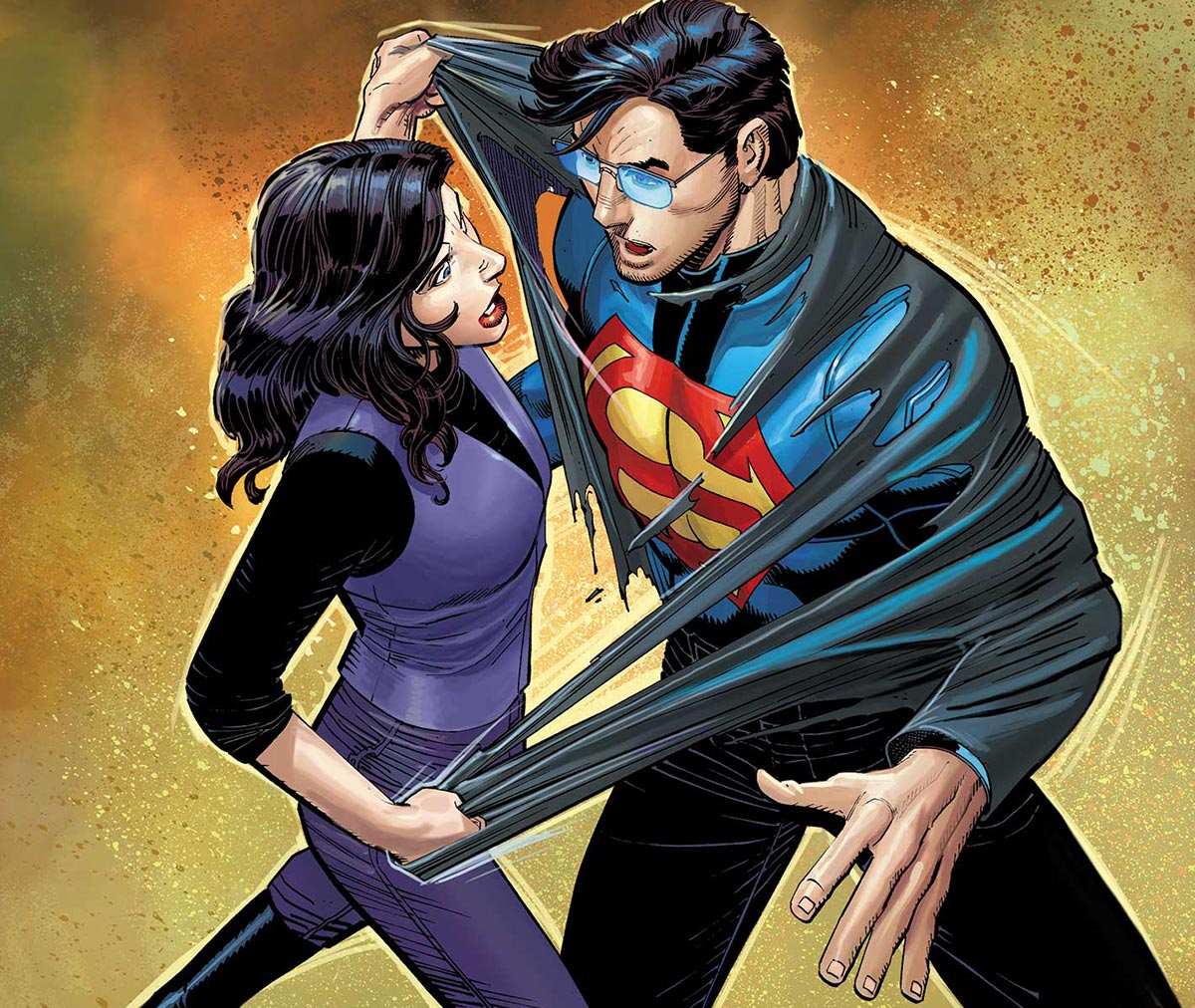 MSG: Issue #41 does focus a lot on Clark’s job as a journalist, and issue #42 shows even more of that. How are you thinking about Clark, Jimmy, and Lois in those terms as the story progresses?

GLY: When we talked about the “Truth” storyline as a team, we wanted every book to handle a different aspect of how this change — his outing — is going to affect Superman’s life. For the book John and I are working on, we’re focusing on Clark’s supporting cast at the Daily Planet. And I liked that! Jimmy and Lois have these deep histories with Clark and it’s wonderful to be able to play with that.

MSG: So, without getting too far into spoilers, can you talk a little about what we can expect from the antagonists these three will be facing come #42? 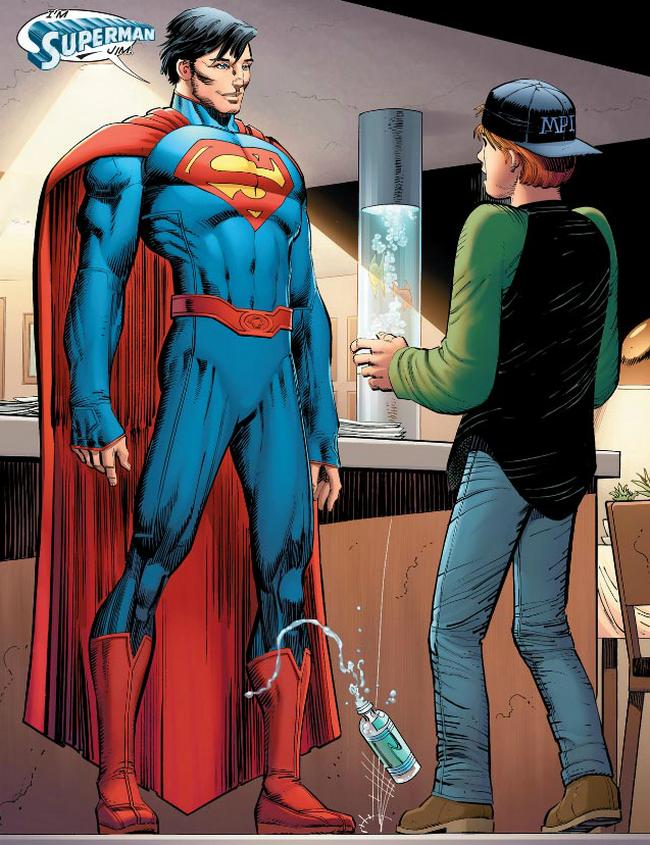 Superman has always been known as the “Man of Tomorrow,” but I think our notions of “Tomorrow” have changed. I wanted to pit the older notion of “Tomorrow” against the newer and see what happens.

The biggest thing that happens in #42 is Lois finds out that Clark Kent is Superman, and in #43 and #44 we’ll play that out and explain why Lois exposes his secret identity to the world.

JRJR: There’s a really neat twist to the process of revealing that to the world, and it’s really very clever. The best thing about it is it’s not the standard stuff.

MSG: Interestingly enough, this is really only the second time in official continuity to be able to draw this moment when Lois Lane discovers Clark Kent is Superman. How does that feel to be the guy to draw that?

JRJR: I would have preferred to be the first guy to have done it. [laughs] Because of the way this is done, with the twist that is added, I’m very happy with it. I know there’s cynicism among the readers and critics about every time we say we’re trying something new, but it really is different and clever. Now the trick is to play it out in sequential art so that it’s different and not just for the sake of change.