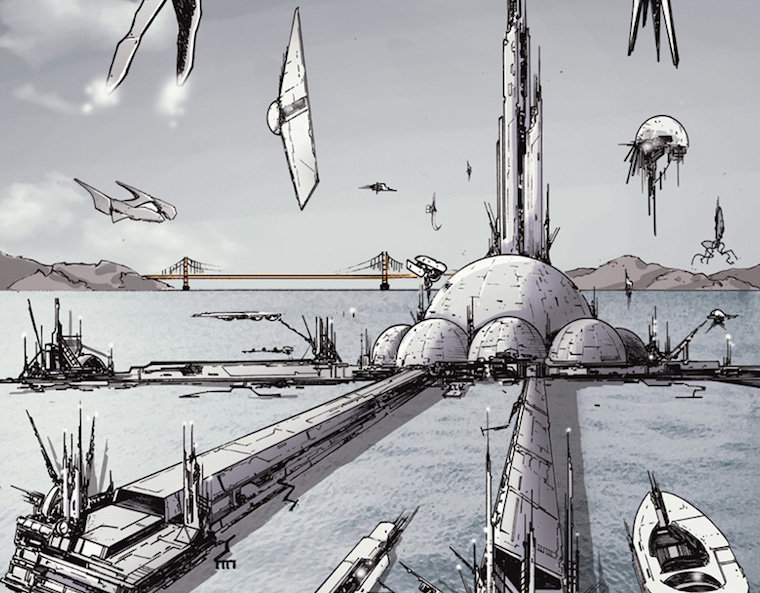 Aliens have found earth! But they don’t want to invade in this new comic series. They just want to do business with us. I talked to Zack Kaplan and Andrea Mutti about their soon to be out series, Port of Earth! 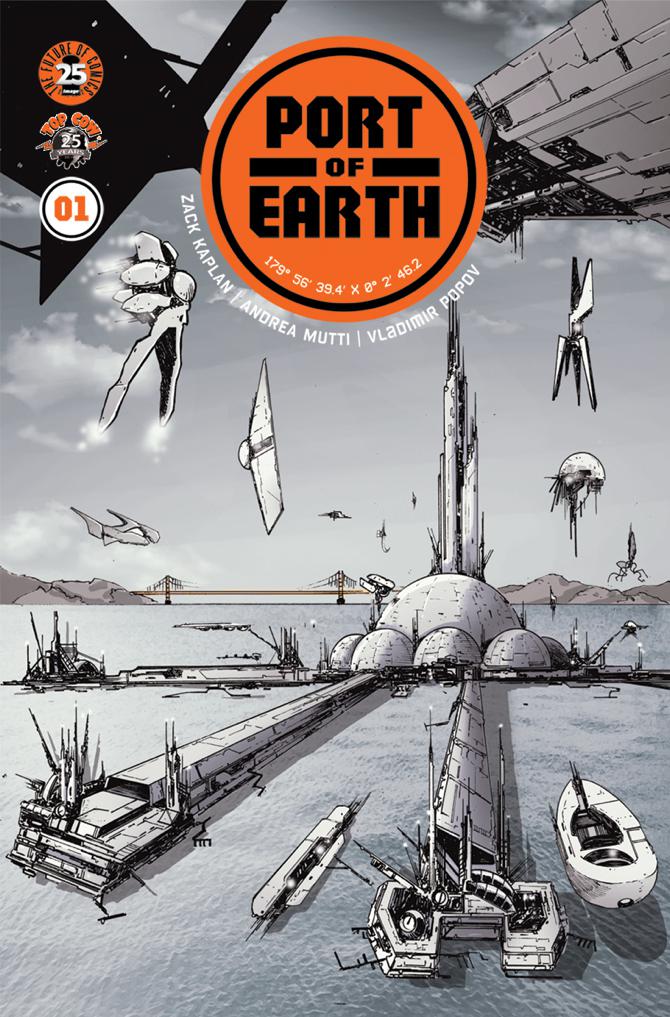 Mexi Gremillion: Zack, Port of Earth is about aliens who come to us not to invade, but to place a galactic port on our planet. What inspired you to come up with this idea?

Zack Kaplan: Maybe one too many alien invasion movies. There’s a lot! TV show too. You know, if you look at human history, from the Europeans coming to the New World, the Americans coming West during transcontinental train expansion, to any occasion in which civilizations collide, it usually begins in business and trade, and it’s not until later that tensions bubble over into military action. I think it’s almost ironic that we assign this pure aggression to our imagined aliens, but the most human response would be trade. It requires the least amount of risk and loss and the greatest opportunity for manipulation. And the story of Port of Earth explores this complex scenario and the challenges humanity might face making a business deal with an advanced race. There’s no backing out of the deal, and this particular deal requires us to protect dangerous rogue aliens when they visit Earth, even if they come into human populated areas and kill innocent people. The deal comes first, because if we don’t deal, then what happens?

MG: I noticed that water is the way aliens power their ships. That’s an interesting choice, since the build up of taking small amounts of water from our closed system over time could lead to some pretty terrible consequences in the long run. Why did you choose water? Will there be seeing any repercussions for Earth’s environment for quickly saying yes to this deal?

ZK: Actually, I wanted the problems and consequences from the deal to be related to the complexities of culture clash, the difficulties of aliens who have different perceptions of the galaxy, various customs and beliefs, suddenly being thrust in contact with human beings, and the task of managing these interactions without violence or conflict. So I chose water because it’s ubiquitous here on Earth. We equate water with life, and why not also with power and energy. Water into energy felt like it was a clean process to me, albeit advanced. So in Port of Earth, the alien spaceships require minimal water, not enough to have any impact on our planet, and the process of refining the water and fueling the ships is clean. No, water was chosen because it seemed void of a conflict. The conflict comes from the culture, from the dilemma for Earth of protecting the peace, protecting these visitors at the expense of our own.

MG: In the short issue I read, the Consortium turns out to be the “Chevron” of the galaxy, instead of the “U.N.” as many earthlings suspected. Will there be any interactions with a sort galactic U.N. in the future?

ZK: No, it’s a very contained story. We are left in the dark about a lot of the galactic machinations. There’s always this idea that aliens will come and bring complete understanding of the galaxy. That makes it very easy on us. It’s a lot harder to deal with the reality: aliens might come and we might still know nothing. What’s more, it might take decades to even understand the aliens we deal with. So this story takes place from a very claustrophobic perspective of the agents on the ground, their experience hunting down alien visitors, and their issues coping with the complexities of their job. Even after the stage is set in Port of Earth, we do not understand the group we made a deal with, the Consortium. We come to realize that they are selling access to the Port, but that even they do not know all of their customers, where they come from or how they act. And as far as we know, there is no galactic UN. This story sets humanity in the dark edges of the galaxy, left ignorant and confused, suddenly thrust into contact with little preparation or help.

MG: You set up a very interesting plot, where the Earth is being taken advantage of by a more well-developed alien race with a keen eye for business. However, I’m intrigued about what kind of person your main character will be. Could you perhaps give a few details about who exactly the story will revolve around? Will it be an agent of the Earth Security Agency? A normal human? An alien that’s part of the Consortium? An alien stopping by the port?

ZK: The story follows four primary characters, all centered in the world of the Earth Security Agency, the organization responsible for our planet’s security and the maintenance of the deal. The ESA has come under a lot of scrutiny and public outrage for its inability to maintain the situation, so they’ve opened up their facilities to news cameras. We see hard-hitting Julia Campbell interview the head of the ESA Tom Rutgers in what I like to think of as a Frost/Nixon style journalistic battle to get to the truth. Is the ESA a corrupt and self-involved organization who’s slowly ceding control to the Consortium for profit, or are they doing their best to protect us from the larger threat of alien occupation. We also take the news cameras in a routine ride-along with two ESA agents on a day that becomes anything but routine. Our ESA agent guides are George Rice, a by the book pacifist, and Eric McIntyre, a reckless xenophobe. During their ride along, they find themselves hunting a dangerous alien visitor along the California coast, and Rice quickly realizes that he must also deal with his partner’s personal feelings and hatred of aliens. Rice is tested by his experience and ultimately his story asks the question: what happens when even the reasonable pacifists on our borders and in our conflicts lose control? What happens during culture tensions when we lose reason to emotion? 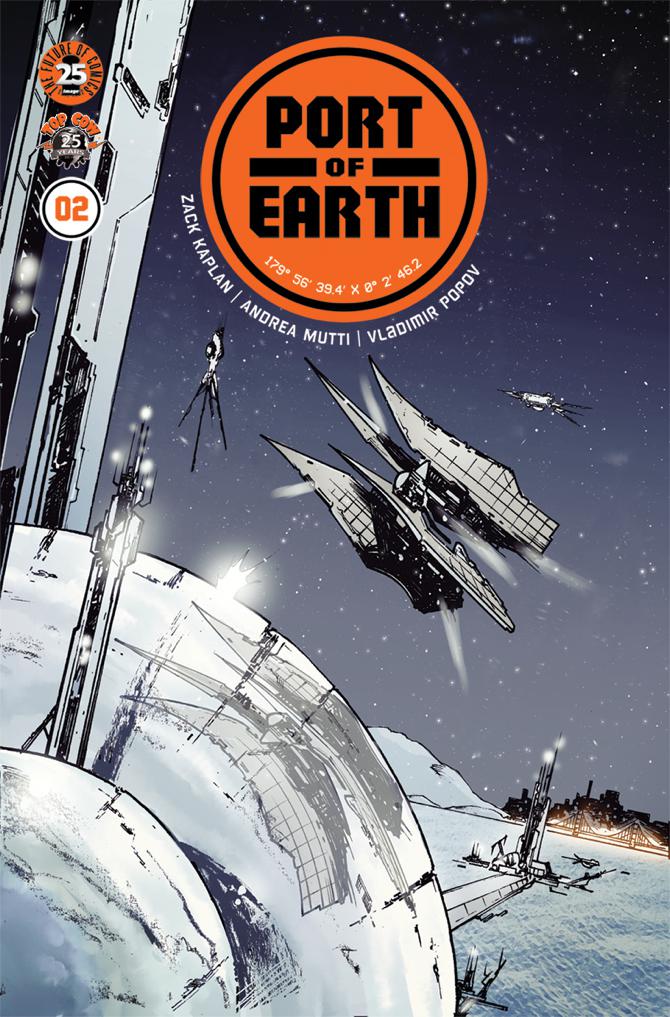 MG: I love the end of the short issue I read, where the agreement that seemed so good at first to the humans ends up not being what it seems. I like that this story starts with the consequences of greed and how, in the end, humans are duped into a bad deal. What’s been your favorite thing to write in this series so far?

ZK: Oh the complexity is so amazing to right! Because the more complexity I add, the more each character seems to be reasonable and makes total sense, the more honest the story feels. I had a lot of fun crafting the interview between Campbell and Rutgers that takes place across the first eight-issue arc. There is this layer that the deal seemed good and then it wasn’t good. Were we sold out by leaders and human business people who were greedy? Were we trapped by the aliens into this situation? Or is it all so complex that there is never a single intention. I can think of so many moments in life where I can see multiple possibilities and I can imagine myself with multiple intentions or goals or responses. It’s been a joy to infuse that nuance into this story and to show that even characters on opposite sides of a battle can both be right. So if you are looking for an alien arrival story that brings human complexity and nuance, this is it.

MG: Andrea, I love the designs of both the alien technology and the aliens themselves. What inspirations did you draw from when creating the technologies and these new creatures?

Andrea Mutti: So, the point is how can we imagine an alien? This is the question, because we have an idea about that. The best way lets the imagination go free. Of course, my experiences in my comics, movies, novels and all sources are inspiration for that. We can find Star Wars, Star Trek, Dune, Valerian and dozen of others….but I thought abut the animals too. If you take a look of some insects, fishes or so, you can see that the nature can be really..alien to us! So, that’s the way, the good mix!

MG: I love the panel towards the end where aliens are destroying a boardwalk. There’s something both cynical and terrifying about the chaotic prospect of a future where business chooses whose arrested. What’s been your favorite thing to draw so far for this series?

AM: Very good question. The truth is that the entire story is full of great things. Aliens, alien spaceships, voiceless, weapons, landscapes and climax. Is a dream for an artist, I have to say! And working with Zack, it’s the perfect collaboration. Simply cool, when you share the same passion and you have the same goal, everything seems easier. And your job is pure happiness. And the story is better and better… 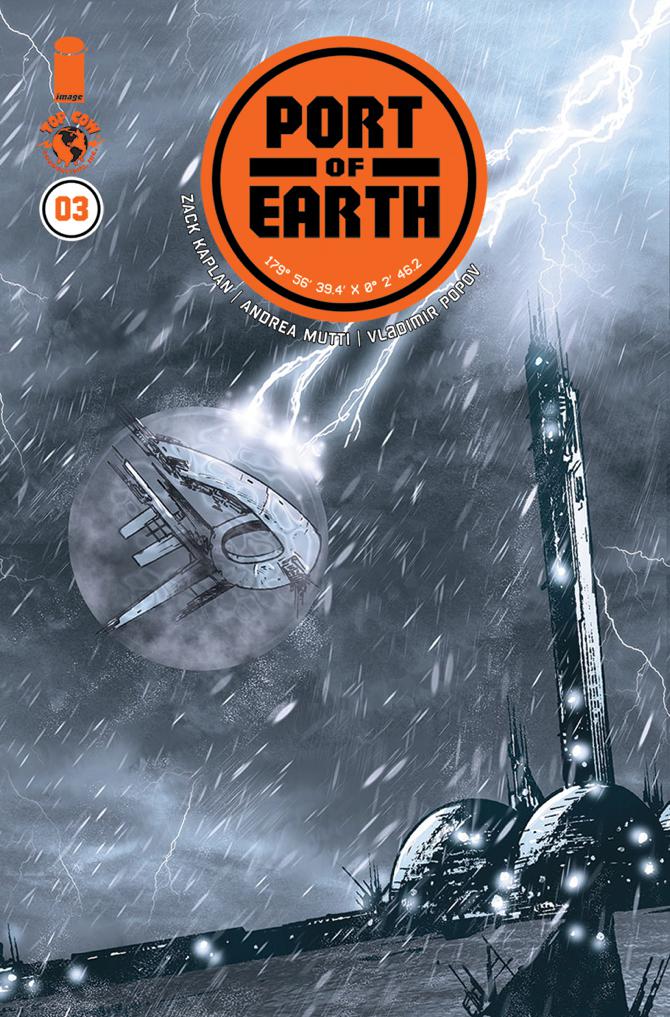 MG: While I loved reading the short issue I was given, it only gives a taste of what the comic will be like. What should readers expect from this new series?

AM: Lot of fun, cool and dramatic moments as well. I think that over the story, there is a truth to imagine. Aliens arrives on Earth, and bring with them the promise of good things, very useful and great for human beings, but at the same time, good can be wrong for others. Is not the incredible metaphor for life?

ZK: That’s exactly, right! At first glance, PORT OF EARTH centers on tough agents with big alien guns, chasing big alien visitors in a very contained action spine. But the interview around it, the global story unfolding in the background, it all conveys that this is both an amazing opportunity for humans and a terrible nightmare to manage. If we can find a way to cooperate as humans, to work together to protect our planet, then this might allow us to solve our energy crisis, to graduate to galactic participants. But if we fail in our obligations of the deal, the alien Consortium will not tolerate it, and they are more advanced than us. Be prepared for a thought-provoking exploration of alien arrival and the challenges to protect the little guy in the world of business. Oh, and big aliens and alien guns.

MG: Besides Port of Earth, are there any other projects that you’re working on that you’re excited about?

AM: Yeh, but I can’t say anything right now….welcome in the grid!