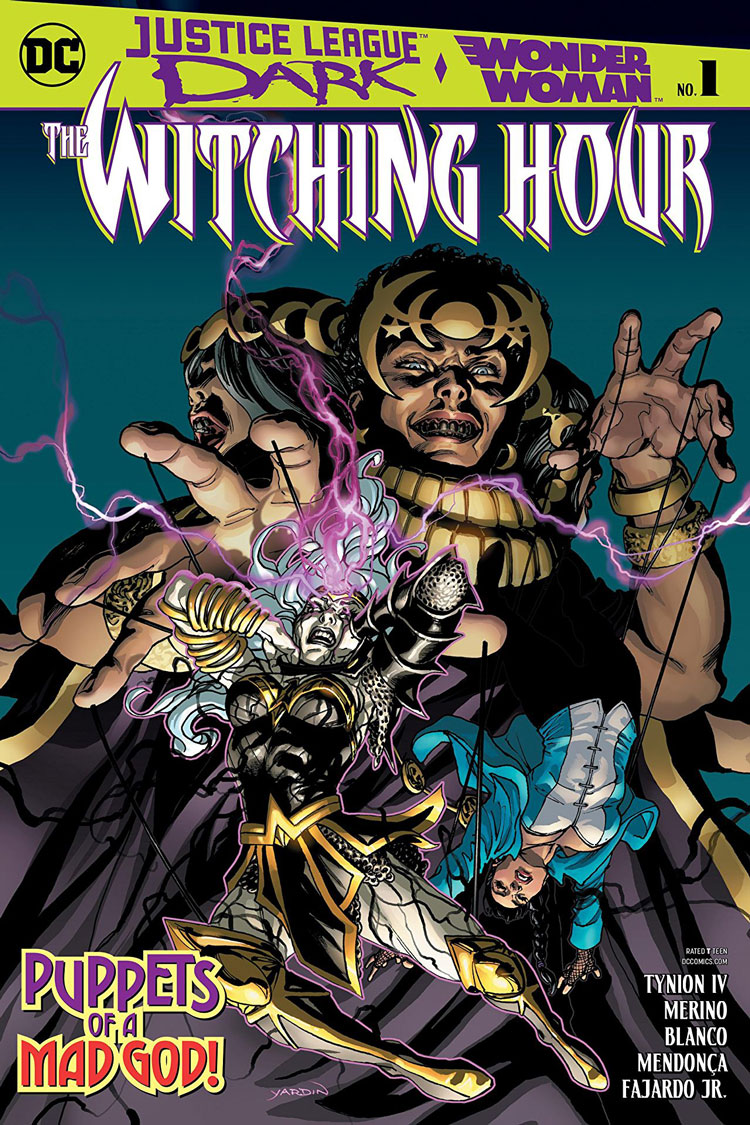 Just in time for Halloween, an era of magic ends and begins as “The Witching Hour” crossover concludes and it’s going to take the entire DC magical community to stop the Goddess Hecate from destroying the world and it’s magical communities any further.

Both Justice League Dark and Wonder Woman as titles have traveled all over the DC magical landscape in their attempts to hinder Hecate’s invasion and control over Wonder Woman through the Witchmarked. Tynion juggles a very large cast of witches, warlocks, and warriors all with different story beats but connected in their plots to stop a possessed Wonder Woman and Hectate. There are a lot of moving points from start to finish in the finale, starting with a change within Swamp Thing’s world.

Swamp Thing is facing the challenge of change and repairing The Green with new wrinkles to his domain. Merino draws the Plant-based Hero with grandeur and keeps up the smaller panels to give moments that the story needs to breathe and move forward. Involving every Hero that deals with magic give “The Witching Hour” a lot of room to focus on and Tynion balances plenty of threads and characters. The art duties are divided amongst Merino, Blanco, and Mendonca with Fajardo on colors and each artist gives their section there all with dazzling colors backing them up.

The Witching Hour has saved it’s biggest moments for last and that goes double for the character interactions. Tynion pairs the magical characters into smaller groups and gives them plenty to contemplate and do battle against. The magical side of the DC Universe is being forever changed by this event and Tynion makes sure you feel the weight of the choices these characters have to make. Merino captures the normal and abnormal of Nanda Parbat in the wake of Hecate and Wonder Woman’s assault on the magical location with Constantine and Zatanna forced to see the devastation. Merino plays with paneling to showcase all areas of Hecate and her steps to completely taking over magic.

The story allows the creative team to draw some of the craziest pages and establish the scope of the magically induced craziness that comes with fighting God level characters. Not only does the finale carry weight for both the JLD and Wonder Woman corners, but it’s also doing great work for the participating character’s adding to their mythology and in the wake of the New Justice era, zeroes in on Wonder Woman’s place in the realm of magic. Blanco handles the sections with Diana and her historical deep with ample spacing and unique paneling that takes full command of her situation and allows Fajardo to show a contrast of colors involving Diana and an absolute smorgasbord of colors everywhere else as the action ramps up.

Merino and Tynion bring three lines of characters together for Mendonca’s section and the art transition is noticeable but it doesn’t distract from what’s going on, it’s simply another part of the story. Tynion provides a lot of dialogue for more important figures in the story and one of those is Circe, who is being primed for a larger role to come. The narration style that’s been a frequent motion for the other Justice League books gives the pages from Merino a larger sense of epicness as each box fits the actions of Wonder Woman in a way that adds to the horror.

A flashback/history lesson involving Hecate is some of Blanco’s best art as the story of Hecate is revealed and Blanco charts pages of light, Pantheon’s of Gods, and tragedy. Leigh’s lettering is positioned so it doesn’t distract from the flurry of images that Blanco is telling with Tynion’s writing packing all that he can in.

The story of the Goddess of Magic connects to the larger DC Universe ties that we’ve known and recent additions like the newest villain from the Justice League Dark title. It can’t be understated how Blanco and Fajardo bring together the story of Hecate as they bring Tynion’s writing to life with every panel and moment that brings you up to speed on why she’s the villain of the crossover, and rightly so.

As the finale begins to come to a close, Tynion connects everything the crossover has stood for with callbacks and moments that make the finale to the crossover feel like it’s the end of a Justice League Dark arc as well. The Witching Hour is a crossover that stands by its handle on the magic side of DC and Tynion and his art team have traveled all over the often over-looked section of DC and given a crossover that has changed the game for its corner, strengthened and allowed some characters to grow in ways that are new directions for the character and are possible roads certain titles could follow down the line.

One thing is for certain with the end to this crossover, a new age of magic is here and its characters connected to it are in for some exciting times!