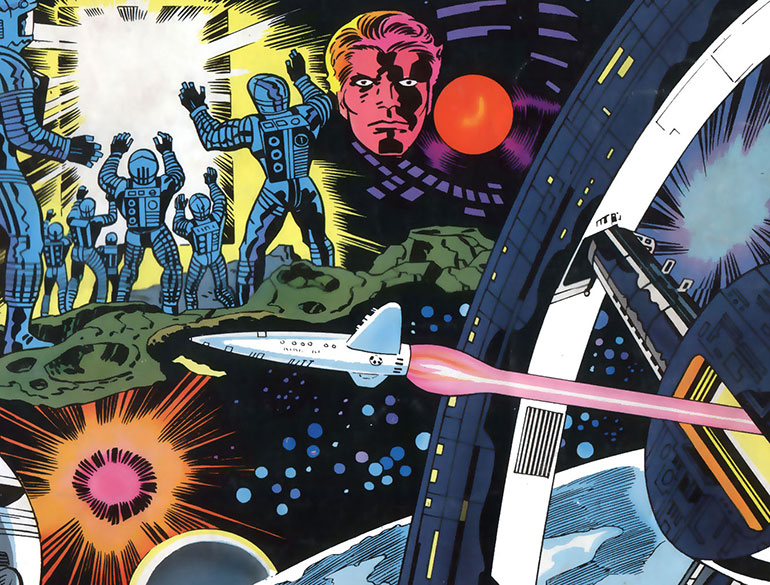 I saw 2001: A Space Odyssey for the zillionth time recently (at Chicago’s wonderful Music Box Theater). As usual, I loved the film. My only regret? Not being high.

As this classic tale of ape people, less-hairy ape people, insane computers, and mysterious monoliths unfolded, I couldn’t help thinking about Jack Kirby’s massive treasury adaptation and the weird series that followed in 1976.

An adaptation seems like the last thing the ultra-original Kirby would or should do, but the themes of the movie and Kirby’s own interests share a Venn Diagram bigger than Galactus. Among those themes is an awestruck, transcendent, quasi-religious acceptance of the unknowable and the inexpressible.

Or, as Kirby himself once put it, “I feel that life is a series of very interesting questions, and very poor answers. But I myself am willing to settle for the questions.”

I picked up the treasury edition at last year’s Wizard World in Chicago. 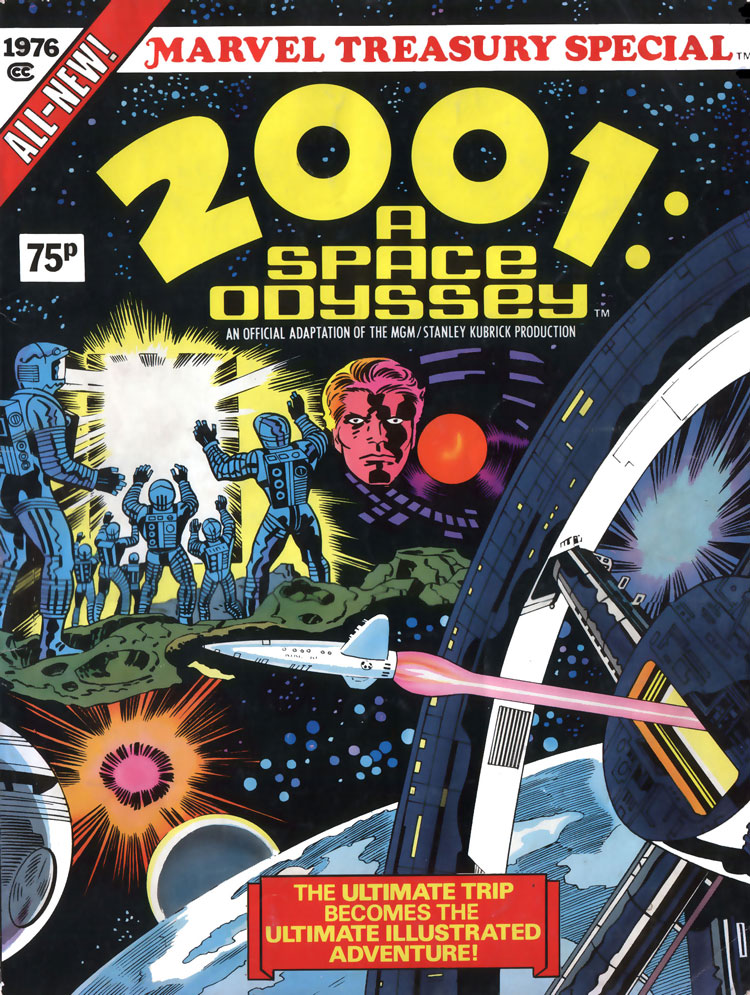 My friend Dan and I were hunting for it and finally found a copy. The vendor heard us discussing our quest, which would have made most sellers jack up the price. Instead, this nice fella let me jack down the price from $40 to a mere $30, which was a steal for this giant beauty.

The treasury is a fairly straightforward adaptation of the movie, but the treasury size makes you wish all Kirby comics, and maybe all comics, appeared in this luxurious format. 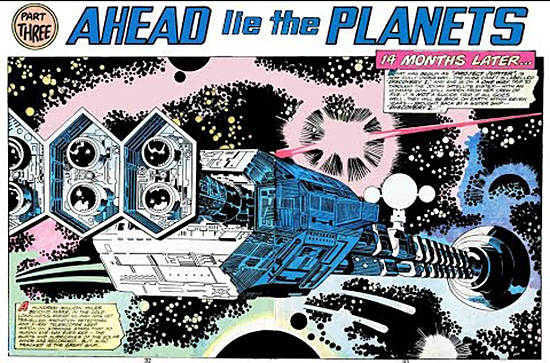 After the movie adaptation, Kirby launched a 2001 series, which was peculiar to say the least. Issue #7 showed what “The New Seed” (aka the Star Baby) gets up to and is kinda lame. Issues #8-10 inexplicably begin the story of Machine Man (first known by the name Mister Machine and serial number X-51).

But the first six issues offer four parallel versions of the 2001 myth: these refractive retellings add depth to the story already told so well by Arthur C. Clarke and Stanley Kubrick, while maintaining the mystery at the cosmic heart of it all.

The first issue isn’t bad, but the best single issue of the bunch might be #2, featuring Vira and Vera. 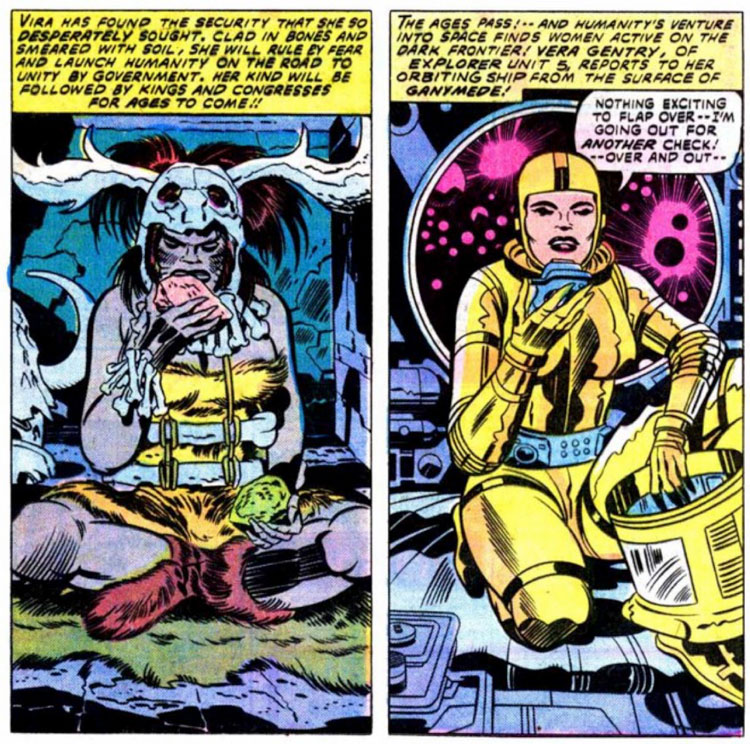 It’s hard to imagine a remake of 2001, but if Christopher Nolan wanted to try it with a female protagonist, this issue could be a blueprint.

Issues #3 and #4 are a two-parter featuring another parable of the monolith and the monkeys. The lead character is Marak, “a true military genius who lives 200,000 years before ancient Greece.” Marak encounters an old man who chats with “the stone that talks,” aka the monolith.

This story of “the Stone Spirit” leads to the invention of the wheel before seguing to a parallel story of Herbert Marik in 2001. One of the highlights of this story is a variation of the classic image of a bone becoming a spaceship in the movie: here Kirby shows one of the first wheels becoming a circular space station. 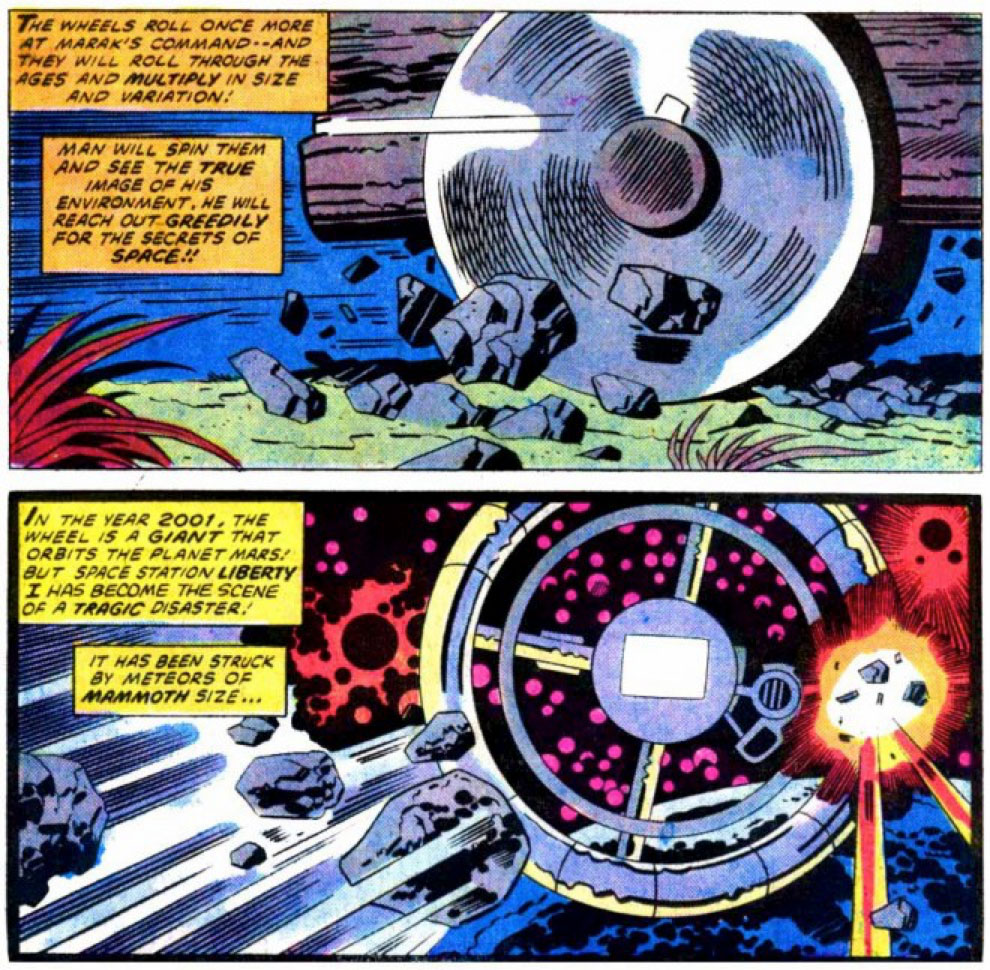 The tale of “Norton of New York 2040 A.D.” begins in what appears to be the sort of typical superhero story Kirby perfected in the 1960s. As the White Zero tries to prevent the explosion of a “holocaust bomb” by the Death Master, every cliché of superheroes is on display—which turns out to be the point.

The White Zero—what a name!—is actually Harvey Norton, and he’s in the middle of a Westworld-style “fantasy environment” called Comicsville. But just like in Westworld, reality intrudes, this time in the form of our friend, the monolith. Inspired by his encounter with the giant iPhone, Norton becomes an astronaut, varying the 2001 pattern: Norton makes the journey from baffled monolith-viewer to baffled space-farer himself, unlike Vira/Vera and Marak/Marik.

Norton shortens the typical 2001 arc, but he completes it all the same, seeing himself age rapidly before becoming a star baby. In his final moments, he sees himself as Captain Cosmic—an upgrade over the White Zero for sure.

There are so many beautiful pages in the series. Here’s one of my favorites, which I enjoy staring at when looking for an alternative to the abyss: 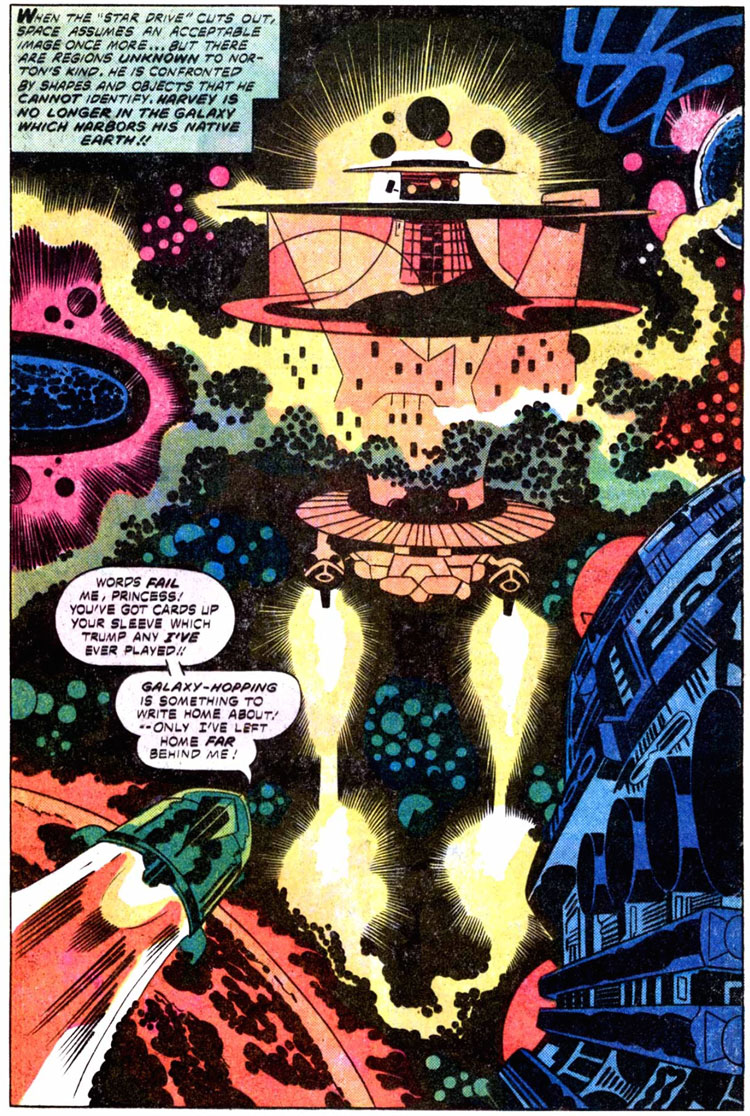 Kudos to George Roussos for coloring the shit out of this art and to Mike Royer for his typically faithful and fantastic inks.

Kirby’s 2001 comics create a sense of cosmic awe that was as much his trademark as drawing blocky fingers and killing Nazis. Charles Hatfield discussed this topic in his terrific book Hand of Fire: The Comics Art of Jack Kirby.

“Kirby is constantly gesturing toward the ineffable, toward the place where rationalism fails, where words are rendered pitiful, halting, inadequate, where all of us re-experience the young child’s sense of being overawed, and stunned, by the grandeur and terror of the universe.

“He clearly loved, though I think also feared, technology’s capacity to unlock experiences the likes of which we’ve never had before. Essentially, he used SF to channel a spiritual feeling, one in which sublime fear renders us slack-jawed, overborne. I see a lot of this in Kirby, this tendency for the story and art to strive together toward the inexpressible.”

The inexpressive and the unknowable are two sides of the cosmic coin: a coin that can drive us, by which I mean me, crazy.

What’s the purpose of my life or life in general? When is humanity going to go the way of the spinner rack? Is there life out there in the universe, other than 3-million-year-old organic gunk on Mars? Hell, what’s going to happen next in the fresh hell of 2018? The shit we know is a small turd compared to the mega-dump of shit we don’t know.

But not knowing is cool in two senses: it’s all right and it’s groovy, at least when Kirby is driving the Whiz Wagon. Kirby’s 2001 is a gorgeous celebration of everything we’ll never, ever grok.