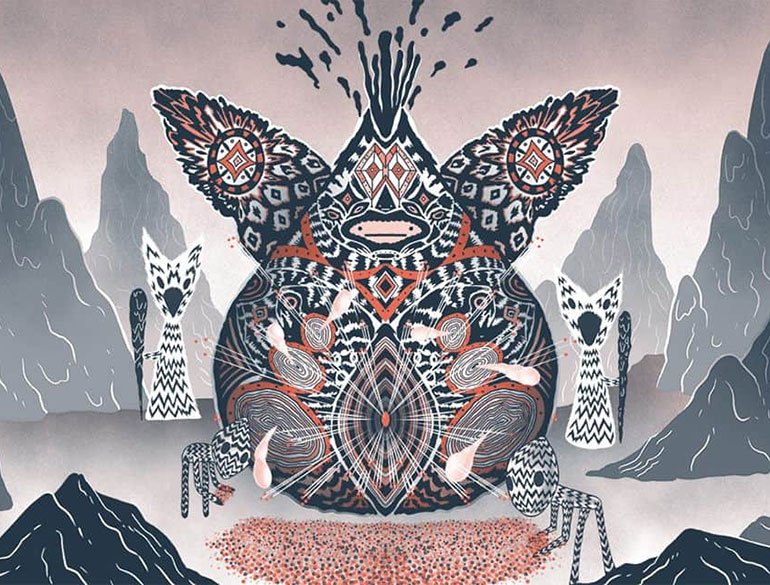 A while back I talked to Charles Glaubitz about his ongoing cosmic epic Starseeds, which has been published in two volumes so far. Here’s part two of our talk, with more of Glaubitz’s thoughts on his quantum work, Jack Kirby, and penis hats.

Glaubitz’s approach to the concept of starseeds is opposed to what you’ll find in the New Age bookstore, where self-professed starseeds can be a bit full of themselves and exclusionary. Glaubitz rejects the idea that “Some people are starseeds and some people are not starseeds … the reality of it is everything that makes us came from stars going supernova and creating newer elements and those elements being spewed out when those stars exploded and combining to make new stars, and we come from all that stardust … So [Starseeds] is an attempt to say, nuh-uh. Not just a certain type of people are special; we’re all special, because we’re all made from the same stuff.” 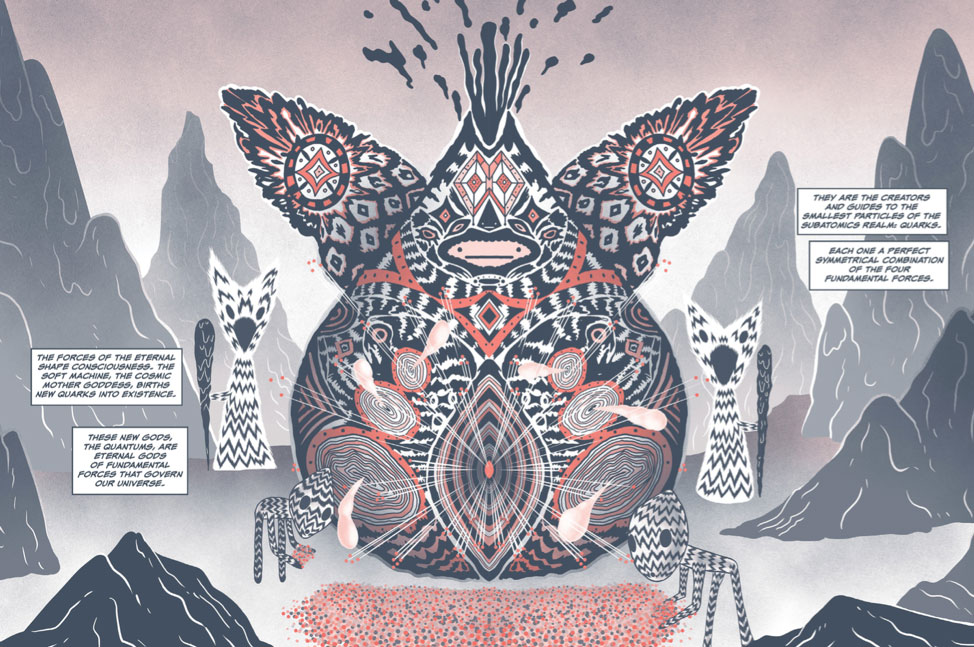 Painter-turned-cartoonist Glaubitz began Starseeds in 2013 thanks to a three-year grant (from FONCA, an NEA-like organization in Mexico) that immersed him in comics creation: “All I did was draw comics every day. The results are Starseeds One, Starseeds Two, and 100 pages of Starseeds Three.”

I asked Glaubitz how the recently published volume two differed from volume one.

“When I started combining them [volume one merged the stories “The Crystal Sigil” and “The Illuminati”], I started seeing a pattern emerge. And I’m like, that’s cool, that’s a pattern emerging from these two stories colliding: that’s like quantum physics. They collide, and then they begin to spin off. And then I said I’m going to go really William Blake on the first one.” 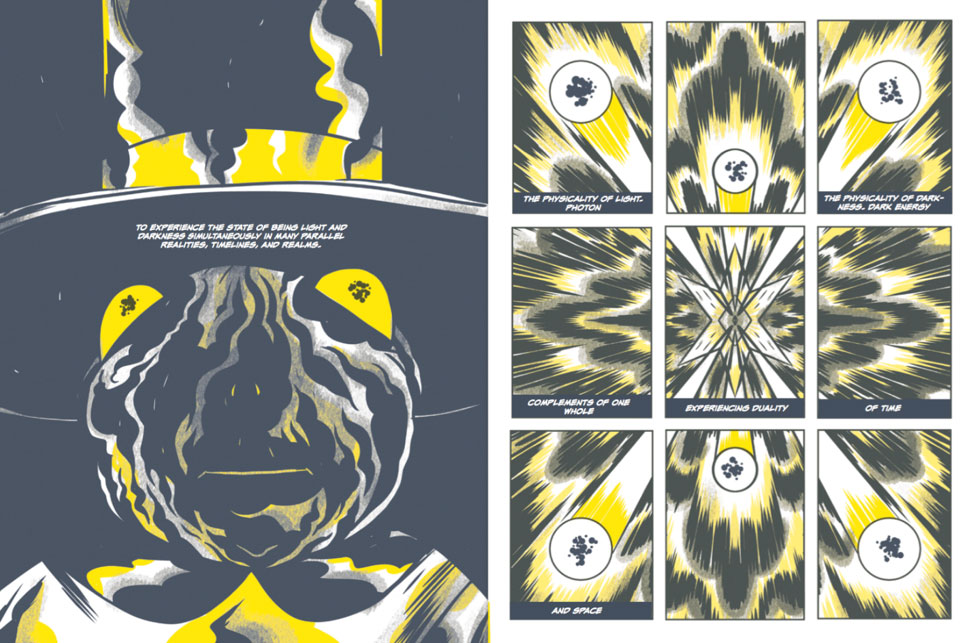 “Reading reviews [of volume one], people didn’t really understand what was going on. This might be too poetic or metaphoric. I decided I’m going to do number two in a way that makes number one better. And not that number two explains number one, but it expands on the ideas of number one, which was basically my first published work [other than self-publishing].

“I’m going to try to do a patterned work. Odd number books are going to be more metaphorical and even numbered books are more linear to see if the reader can go with this expansion of ideas and concepts and then somehow bring it back to a more stable way of understanding what’s being told in the story.”

Glaubitz has a flexible plan for how many volumes there will be. There could be five, but if sales permit, he’d like to do seven. Glaubitz says it also depends on how the story evolves. In a statement that also applies to Jack Kirby’s approach to comics, Glaubitz said: “I’m writing the story visually.” 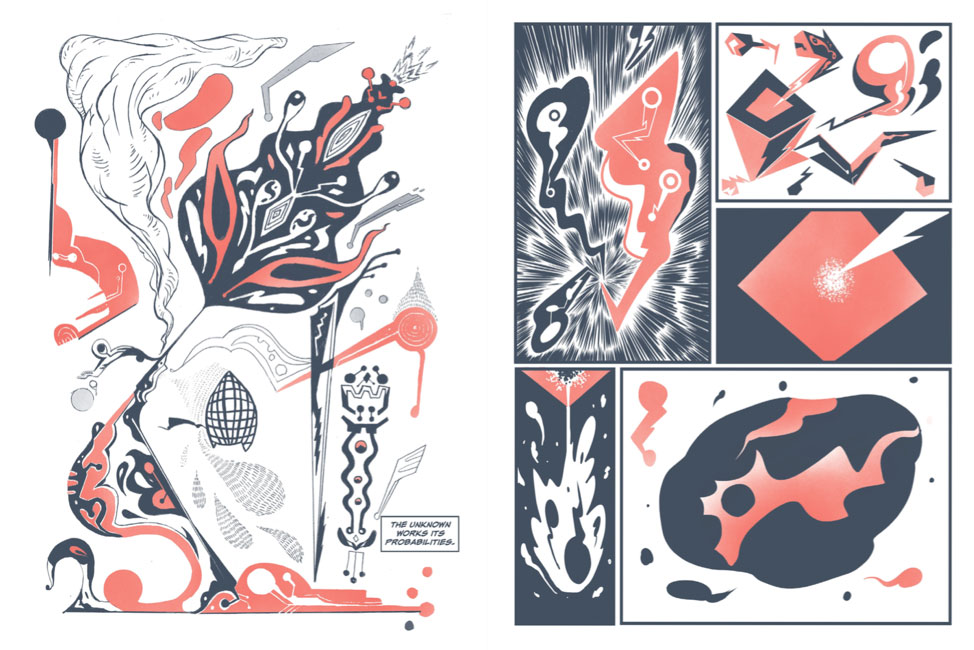 When rereading volume two of Starseeds — especially chapter six — I was reminded of the mind-boggling final scenes of 2001: A Space Odyssey, as poor Dave Bowman passes through the mysterious monolith, his small human mind stretched to the breaking point by cosmic knowledge.

Glaubitz said the film 2001 was an influence, but less so than the Jack Kirby adaptation: “Those pages are just crazy, his art on that book goes from one splash to double splash to six pages to four to two and then again a splash … it’s just a beautiful book. I wish they had that in an artist’s edition because the original art would be beautiful printed in black and white.” 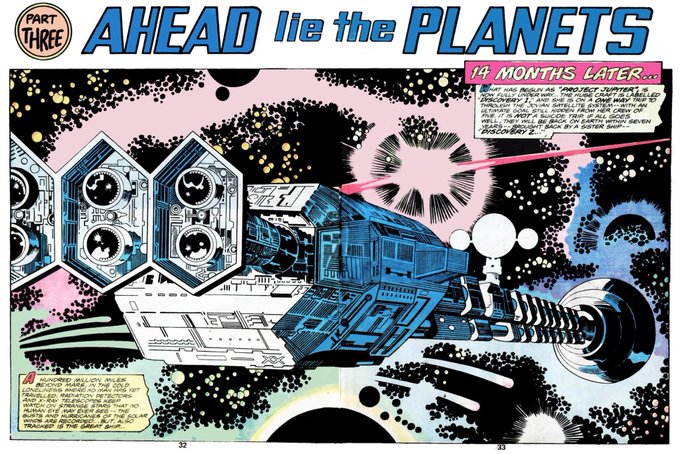 When I wished out loud that Kirby were still here with us, to see stuff like the Marvel movies and Glaubitz’s work, which the King might like even more, Glaubitz said, “He’s still with us. We can’t shake it off.”

“He’s still inspiring new creators to look back at his work, and I think he’s more — and this is really sad in a way — but he’s more powerful now than he was alive. And I think that’s the power art has. It’s really, really strong, and it grows, and it’s timeless. There’s something Joseph Campbell would say, for a myth to be alive, it should be open to transcendence, and I think his art is open to transcendence. It’s so mythical and archetypal that it just transcends time.”

I shared one of my recurring fantasies with Charles (no, not the one about the Martian nuns). I would love to pull the ultimate time heist by snatching Kirby circa 1970, just after creating the Marvel Universe and getting fed up with Marvel Comics and Stan Lee.

Via time-traveling boom tube, I’d bring him to the present day at the height of his powers, but with opportunities to own and create his ideas at Image, Oni, Fantagraphics, Aftershock, or wherever. With such freedom, could he have topped his already outrageously great 1970s material?

“I think we would have an epic story a la Game of Thrones, Harry Potter,” Glaubitz said, “something that’s just huge … Something like Neil Gaiman’s American Gods — a game changer for the industry. And not just in that medium, but something that spreads to all the mediums. I think he would’ve changed how stories would be told presently, because he did it back then, and he did it with a lot of editorial constraint, so I can imagine without any constraint, we would have, hell, I don’t know, we would have Kirbyland or something like that.” 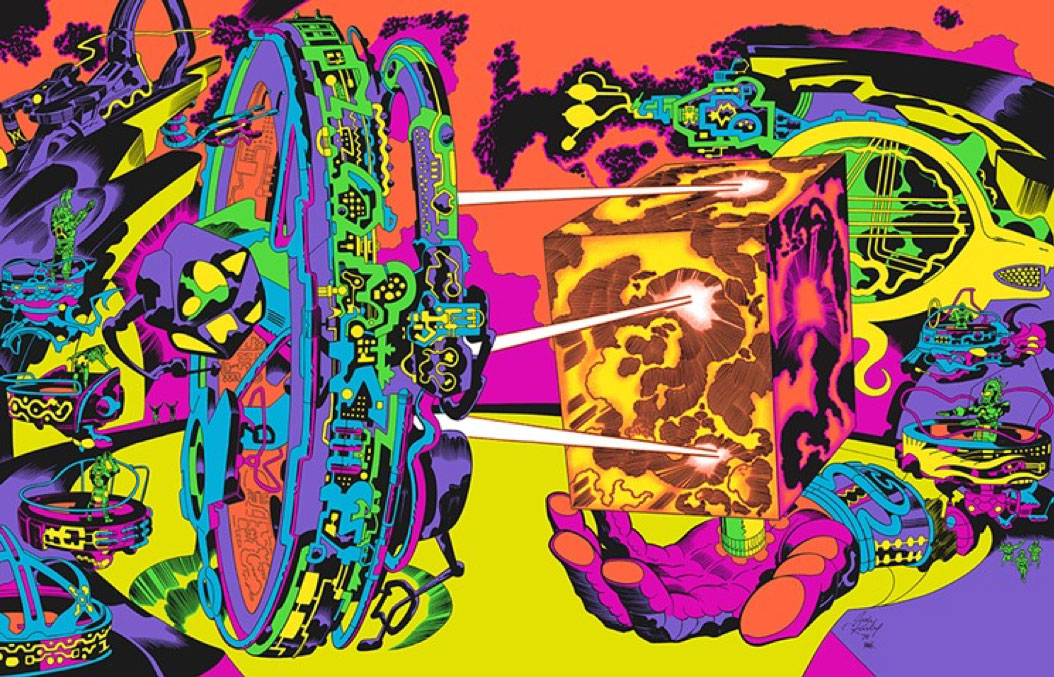 While the thought of riding a roller coaster of Kirby Krackle is enticing, it pales before the multidimensional, dimension-shattering comics of Kirby and Glaubitz, who both provide a perspective that is comforting, especially in the clusterfuck of now.

“We are so preoccupied as a race, as Earthlings, with Earth,” said Glaubitz. “We forget that we’re a rock floating and going around circles of a dying star that goes around and circles with other solar systems, and goes around the center of the galaxy, which has a huge black hole in it. And that galaxy goes around another black hole and another galaxy and so on. We get caught up in the triviality of the society we have constructed for ourselves that we have forgotten to look up at the sky and ponder bigger questions other than the Kardashians.”

But despite his cosmic focus, Glaubitz isn’t running away from the real world. In fact, Starseeds contains plenty of cutting commentary on toxic masculinity through the ages, especially this one. The bad guys are phallus-hooded Illuminati members who take thinking with your dick to new lows, spoofing President Garbage Bag, male insecurity, religion, fascism, and all-dude social groups. Volume one features one of the most insane scenes I’ve ever seen in a comic or hallucination, as the giant phallic god of the Illuminati blows a load on his followers, leaving the most jizz-soaked acolyte feeling like the belle of the fascist ball. 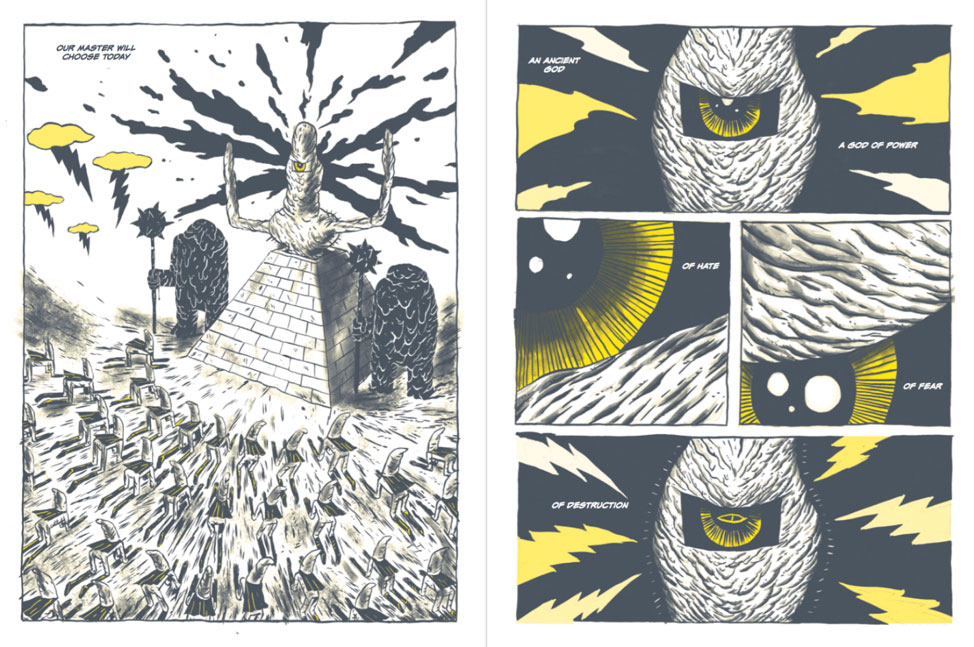 Glaubitz’s dickheads ground his beautiful cosmic story of creation and discovery in the muck of history. 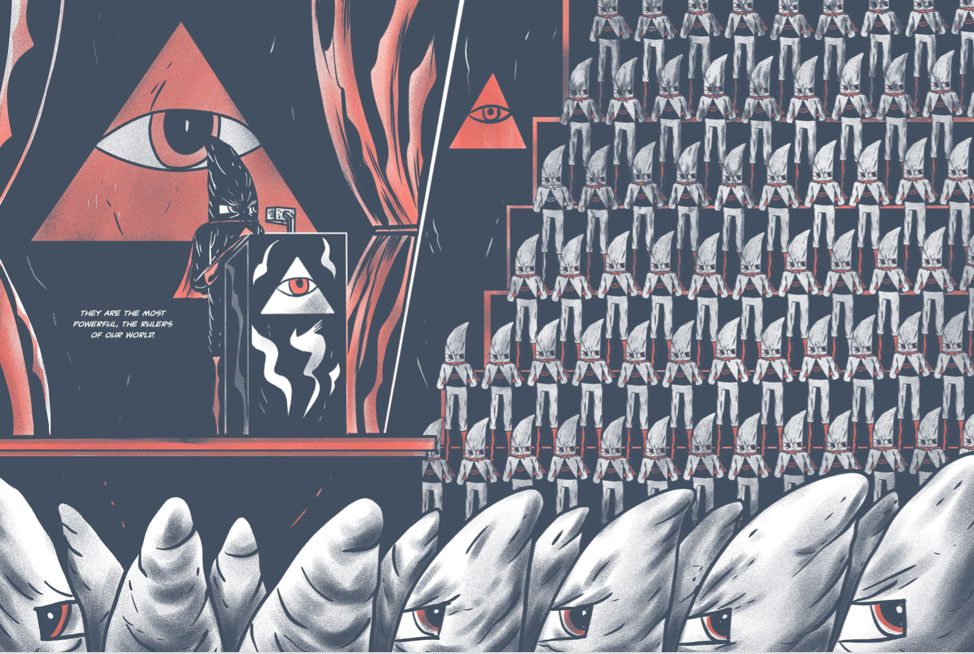 “There’s this crazy thing that happens in male society where the big alpha male dominates the other lower males, and whoever has the biggest dick is the master, and it’s just fucking crazy. It’s a hierarchy based on penis size. And it goes back to the beginning of religion and their huge hats, and there’s something there to be critiqued and to poke fun at. One thing I’m scared of is if I make fun of the villains so much that they’re not taken seriously. But it’s really fun to make fun of that metaphor of patriarchal society. Hopefully, it can be taken seriously, I don’t know.” 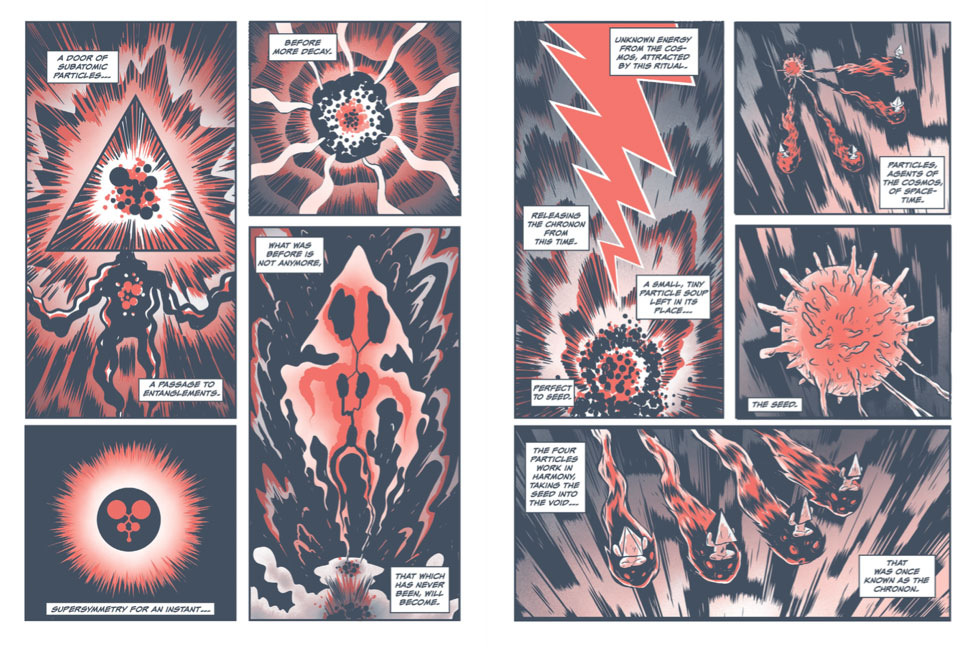 The tallywhacker-looking Illuminati members thrive on hate, fear, and destruction. Glaubitz, with his massive, life-affirming epic, goes in the other direction, with benefits for us all, but especially himself: “If I don’t create, I become very miserable.”

The ridiculously productive Kirby would no doubt co-sign that statement, as would I, and shouldn’t we all, for the love of pancakes? We’ll all be back in the quantum soup soon enough. Better to spend our limited time on this lonely rock making shit instead of making things shitty.