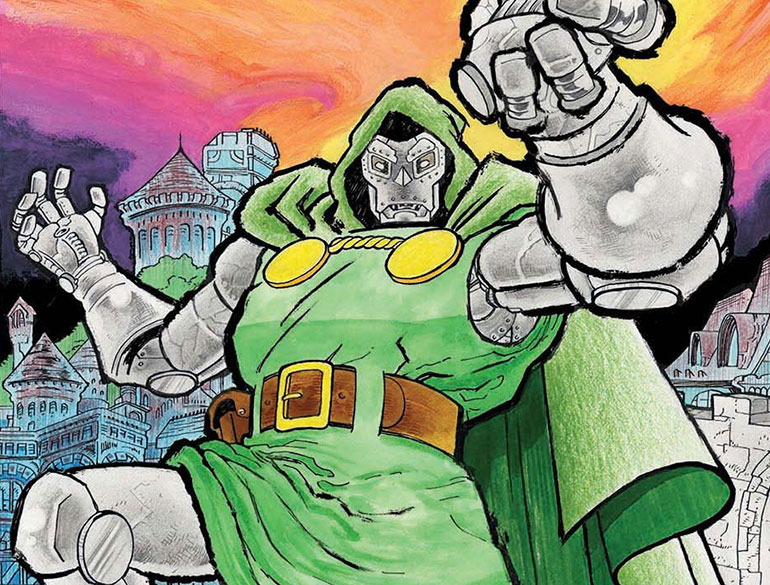 Jack Kirby never got the credit and money he deserved when alive, but after leaving Marvel for DC in 1970, he did enjoy a certain degree of freedom. Sure, DC made some insane changes to his work — like redrawing Superman’s heads to match their house style — but the content of Kirby’s 1970s comics appears to be 100% Kirby, as the longtime plotter and artist became writer, artist, editor, and mad genius.

The King was the closest thing to an auteur in corporate comics at the time.

The results at DC (Superman’s Pal Jimmy Olsen, The New Gods, Mister Miracle, The Forever People, The Demon, OMAC) and then later back at Marvel (The Eternals, Devil Dinosaur, Machine Man, 2001: A Space Odyssey) are visionary, oddball, beautiful, ugly, bonkers, and astoundingly original. Kirby was a one man gang of unbridled creativity. Forty years later, pop culture is finally starting to catch up. 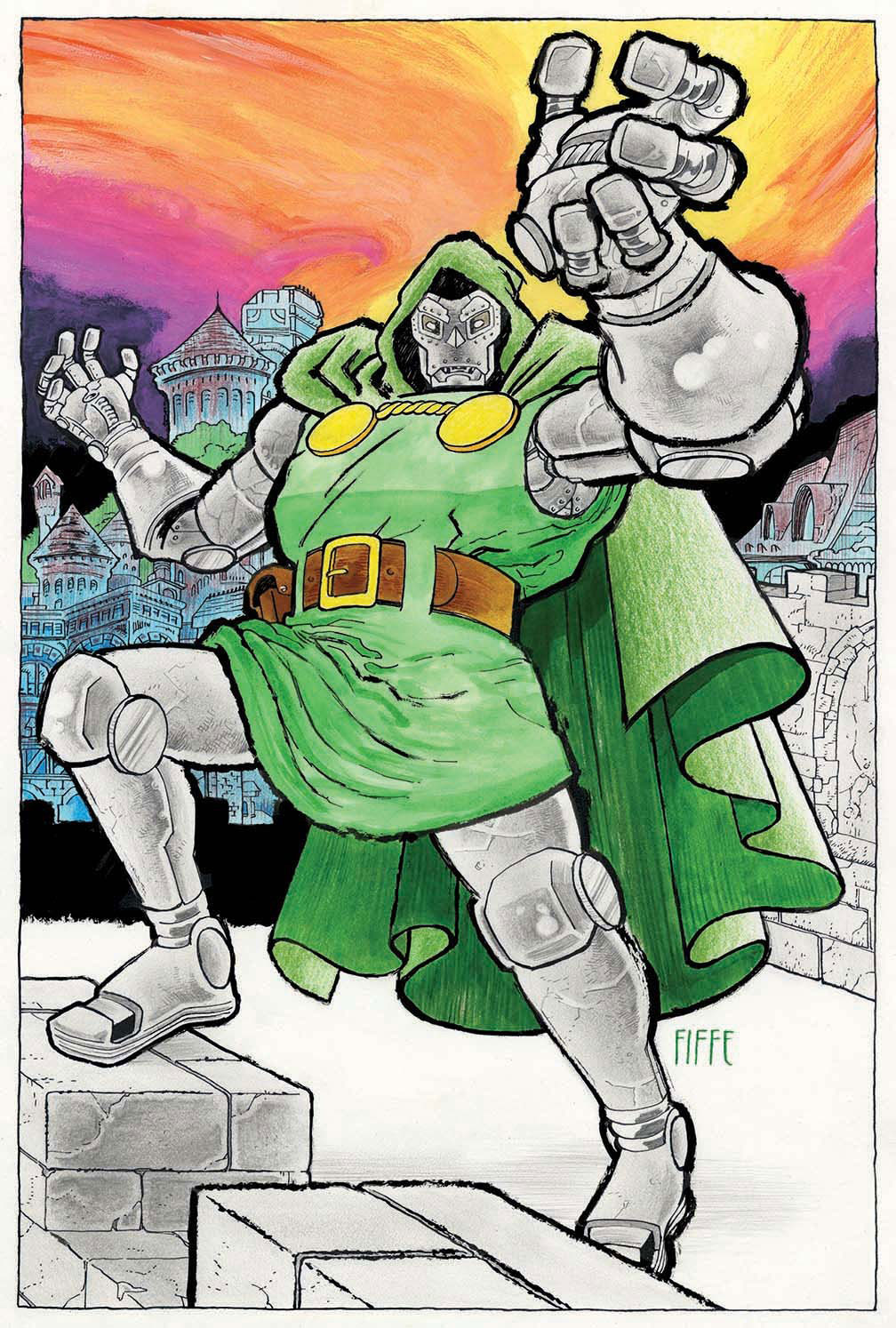 Two of the best auteurs in comics today — Michel Fiffe and Benjamin Marra — inhale the spirit of Kirby and breathe out their own idiosyncratic masterpieces. Fiffe’s family drama Zegas and Marra’s slashersploitation Night Business are as weirdly propulsive and propulsively weird as 1970s Kirby.

Comics like this are no doubt making Kirby smile, as he looks down on Earth alongside the space gods he created. 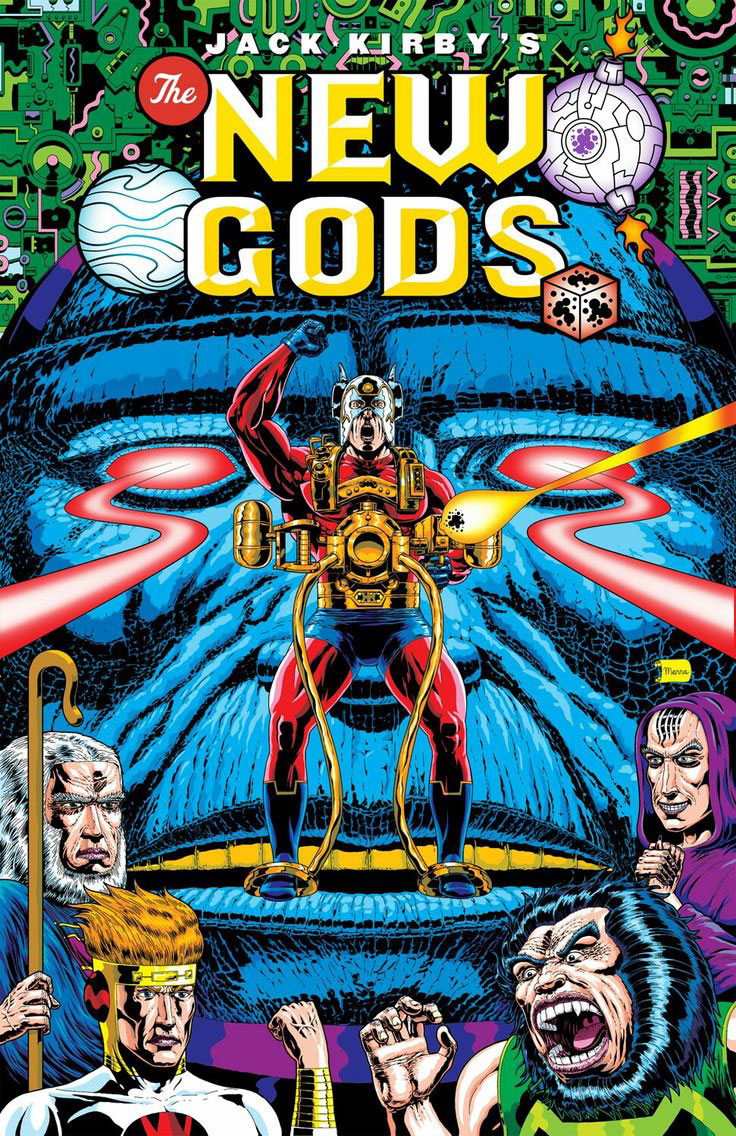 Marra’s Night Business is set in 1983 New York City, around the time Jack Kirby was blowing minds anew with Captain Victory and the Galactic Rangers and Silver Star for Pacific Comics.

Unlike the chaste comics of Kirby, Marra’s NYC is full-on porno-pulp, taking the sleaze of the real world into higher and lower dimensions of mega-sleaze known only to Marra himself, who I hope has a good therapist. Secret cults, deranged detectives, drug-pumped heroes, and bike-riding vigilantes fuck and slash and kill in pleasures so guilty you’d best read this comic in international waters. 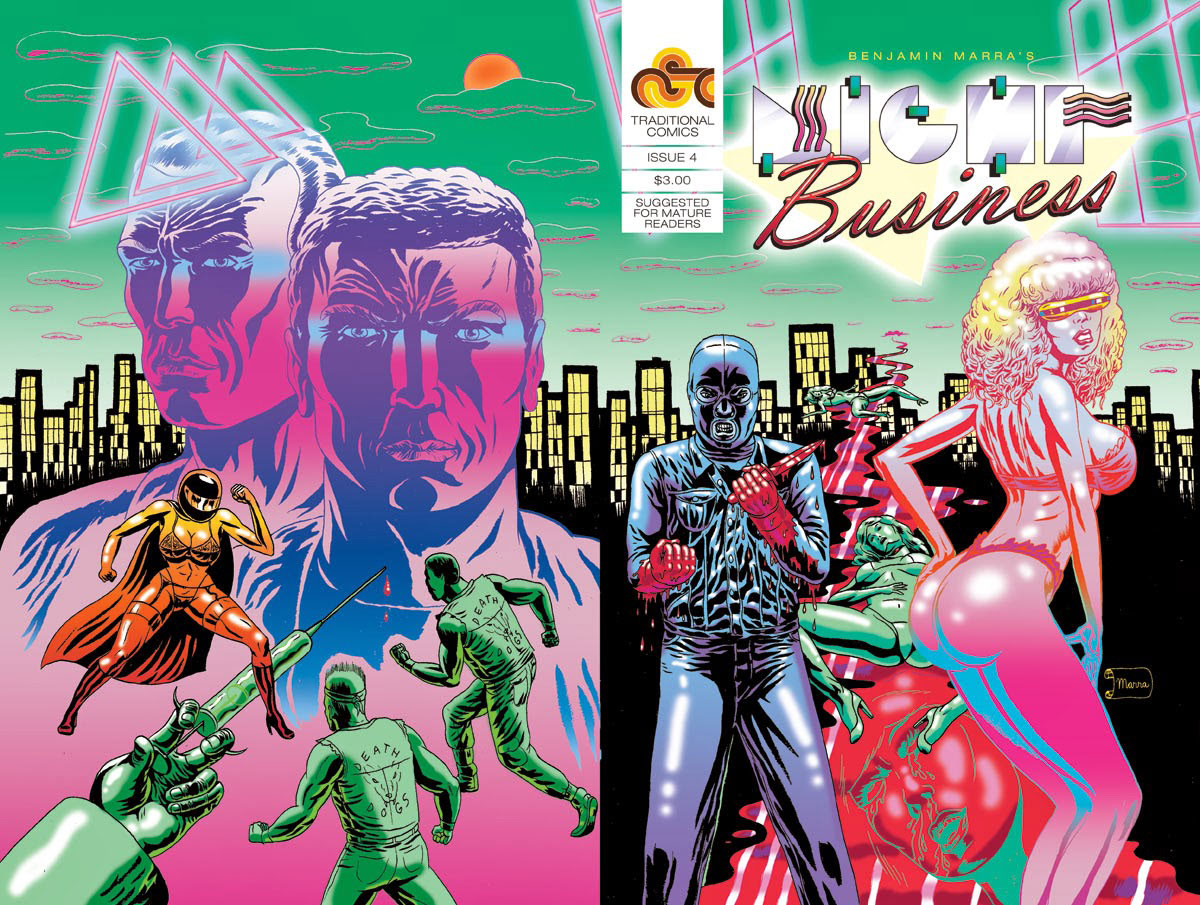 Marra is most Kirby-like in his distinctive anatomy. Many artists have signature physiques: think of the lean adventurers of John Byrne or the stocky noir antiheroes of Frank Miller. Kirby is famous for his square fingers and splayed-legs poses, punching toward the reader, fists a-flying, no 3D glasses needed.

Speaking of border-crossing, Fiffe is best known for Copra, his DIY comic about a Suicide Squad-like team. I wrote about this wonderful comic for Salon. If you’re not reading Copra, you might need to rethink how you’re living your life. In Copra, Fiffe shows just how much genius can be wrung from seemingly tired characters when you turn loose a brilliant writer/artist with no corporate overlords to please. 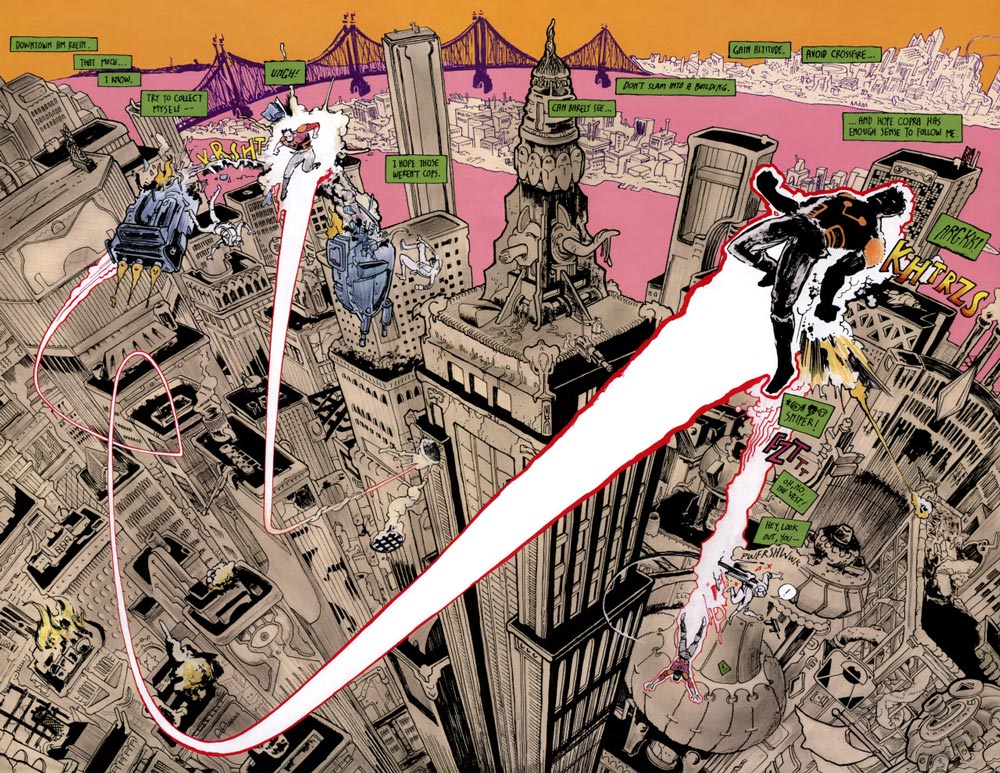 Fiffe—who, in addition to Kirby, has Steve Ditko, Walter Simonson, the Hernandez brothers, and probably all six infinity gems coursing through his veins—had a tough task in making superpowered characters feel fresh, especially when they’re clear analogues of corporate characters.

Just a glance through the latest DC and Marvel fare shows a ton of homogeneity: What was fresh and wild in the hands of Kirby, Ditko, Steranko, and a few others, is now old hat, even if it’s a gamma-irradiated hat pairs well with the Negative Zone. Fiffe’s magic trick is to make all this face-punching, grudge-holding, and dimension-hopping look and feel fresh, as if the subject matter hadn’t been over-trod on a weekly basis since the sixties.

For example, take Rax, who wields a Green Lantern-type weapon from another dimension. I don’t know about you, but I can’t remember being blown away by the visuals of Green Lantern comics too often, even though that ring should be the coolest thing ever. Fiffe makes Rax’s weapon feel genuinely strange, via use of thick, dirty lines and plenty of white space: it’s like the effects of his weapon are bleeding through the page. Rax doesn’t belong in this dimension, and he actually looks like it. 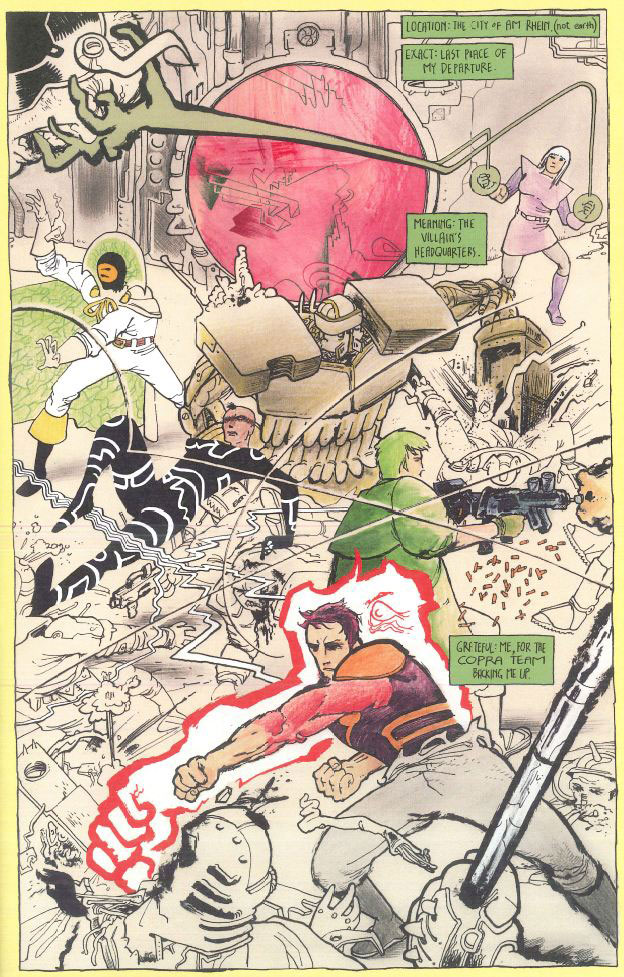 Zegas is a far more down-to-earth story than Copra, which runs the full gamut of superhero fare, from bombastic slugfests to interdimensional cataclysm, and then finds a few new gamuts and runs them too. Though Zegas is mainly a story about two siblings and their emotional baggage — with some Lynchian weirdness — Fiffe makes their lives look just as vibrant and captivating as the antiheroes of Copra.

This page of Zegas is a particular treat, as Emily Zegas runs down a thief who could be a Copra villain: 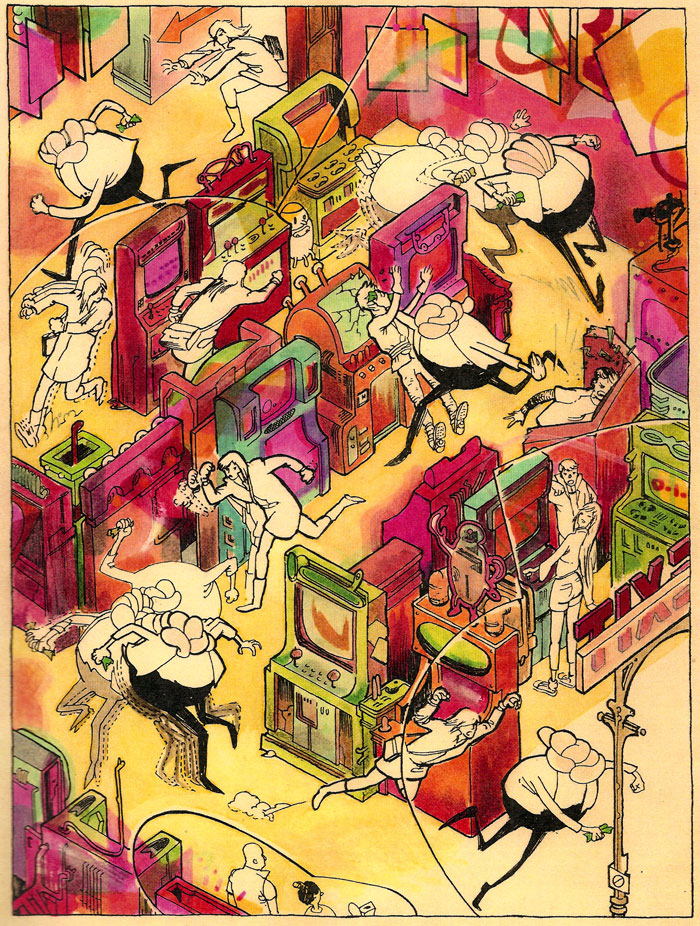 Marra’s most explicit reference to Kirby is in one of his best works: Terror Assaulter: One Man War on Terror. This is an absolutely bananas comic with a title that plays on Kirby’s OMAC (One Man Army Corp) while taking the puffed-out machismo of the post-911 Bush years to its illogical extreme.

The Terror Assaulter is an omnisexual violence machine whose deadpan narration of his fucking and killing is reminiscent of another auteur with a taste for the grotesque, Fletcher Hanks. 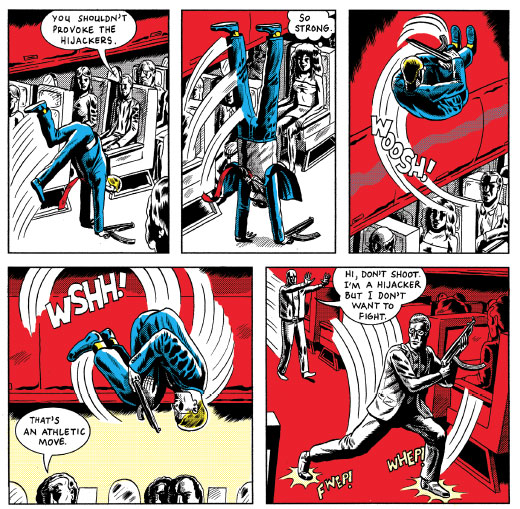 OMAC was Kirby’s update of Captain America for “the world that’s coming,” an ambiguous time of orange-masked Global Peace agents and gene-altering satellites. OMWOT was a Captain America for the post-911 world that made everyone lose their marbles, trading liberty for security with the enthusiasm of a dog chomping a dropped chocolate bar.

This comic is a visceral delight and a bloody great satire, free-basing the collective lizard brain and the equally influential lizard penis. This comic tickled America’s id, which was right next to the prostate.

Though both are influenced by Kirby, Fiffe and Marra carry the Kirby torch highest by virtue of being their own damn creators, making comics like no one else before or since. Kirby evangelist Mark Evanier has often told a story of how Kirby, when informed that another creator was going to do a comic in the “Kirby tradition,” was disappointed. Kirby said, “The kid doesn’t get it. The Kirby tradition is to create a brand new book.”

Fiffe and Marra’s new (and old) books would make the King himself light a cosmic cigar in appreciation. And that cigar might look like ‘Oumuamua, the first asteroid ever discovered from outside our podunk solar system. 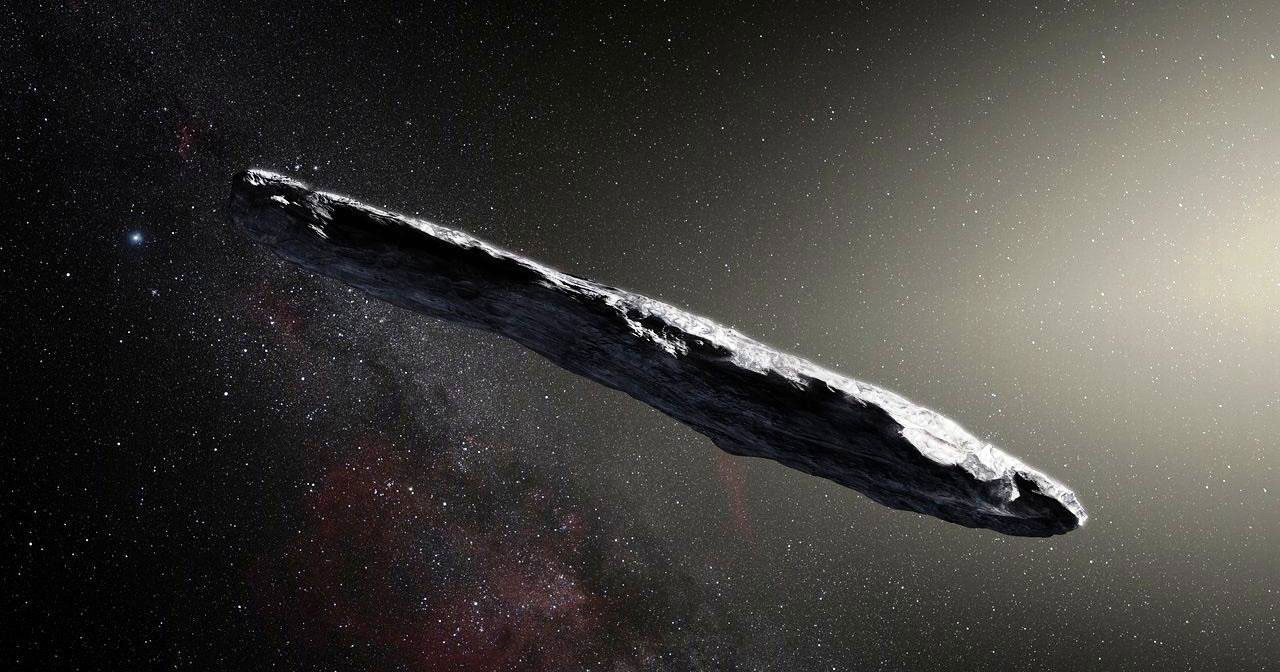