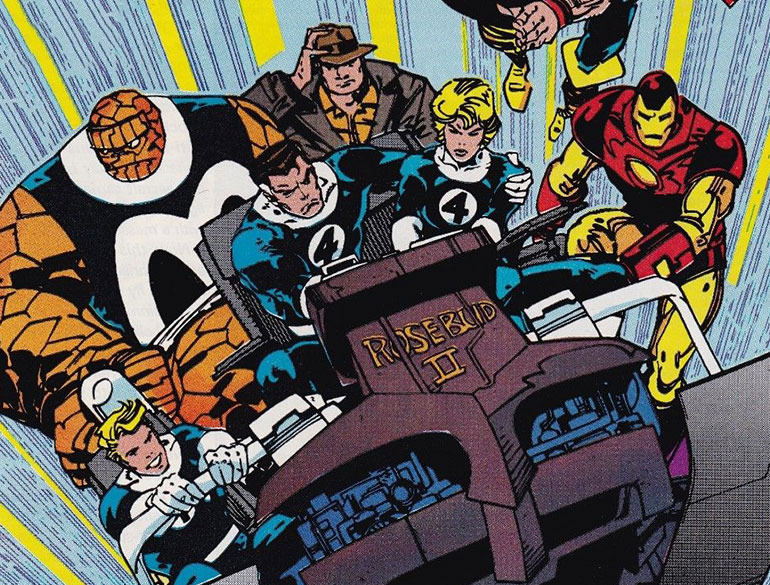 Walter Simonson is, by any measure, one of the greatest comic book creators ever. He also might be the best post-Kirby creator on Kirby’s best creations: especially on Thor in the 80s and Orion in the early aughts. Both runs are classics. For my money, which I spend on too many comics, I don’t think Simonson’s art has ever been better than in Orion. 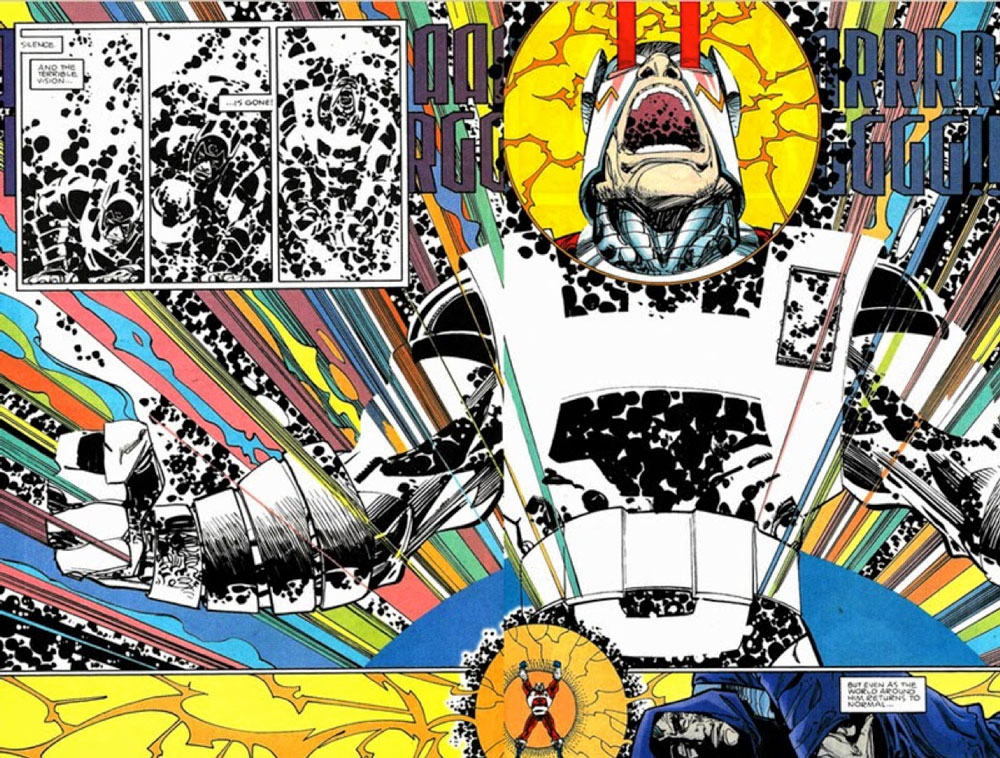 But when it comes to density of ideas, maximum exploitation of the page, and creativity so fresh it reaches new levels of Kirbyesqueness, you can’t beat Simonson’s run on Fantastic Four, which is a thing to behold (two Things, actually). Simonson matches the imaginative power of Kirby with stories that run up and down and across the timestream alongside dinosaurs, President Dan Quayle, and Ben Grimm dating the Thing. I read these dazzling comics (published from 1989-1991) for the first time recently, and Simonson was nice enough to talk to me about them from his secret headquarters in the Baxter Building. 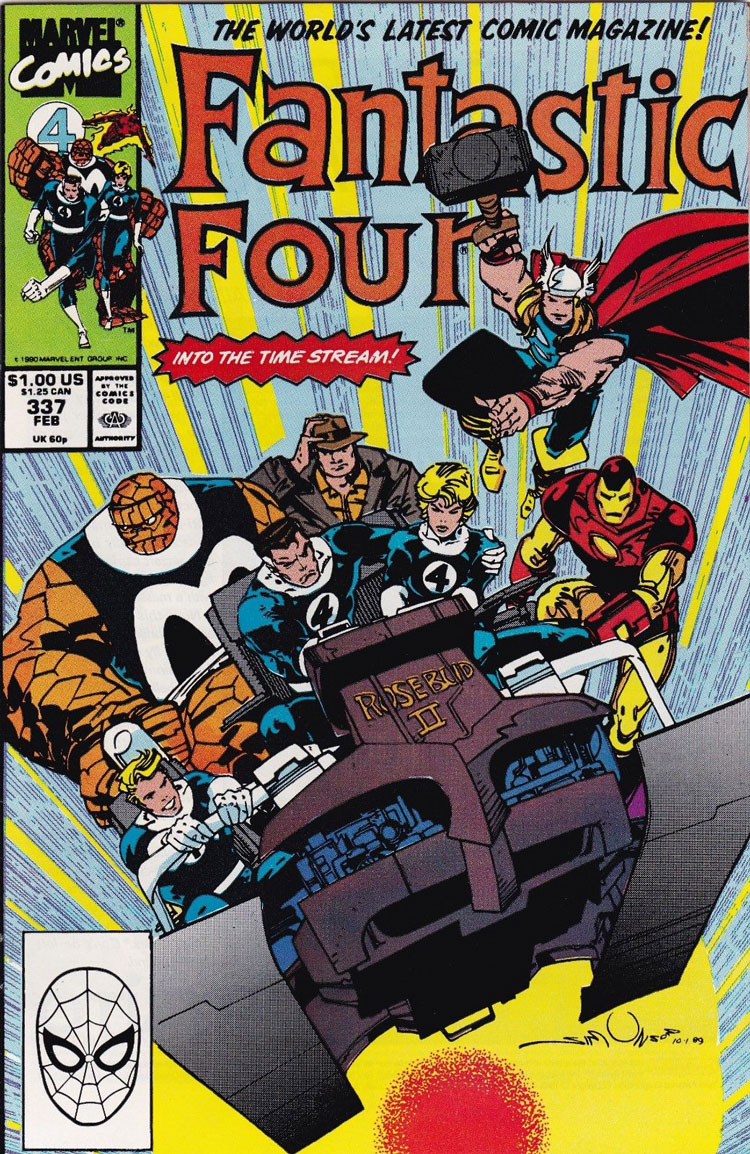 Simonson wrote FF #334-6, but his run really gets flying with his trademark art on a five-issue story beginning in #337 (appropriately, the same number that began his classic Thor run). This saga is what cosmologists call “a doozy.”

In a space-time-continuum-threatening nutshell, there’s a time bubble 20 years in the future: the bubble extends another 15 years, allowing no time travel, which alarms Reed Richards. As this outsized adventure unfolds, we learn that inside the bubble is a “renegade Celestial” who’s been rejected by his Celestial buddies and put to sleep (literally) under the Diablo mountains. Though snoozing, he still managed to build a universe-eating weapon.

And that weapon is named Galactus. 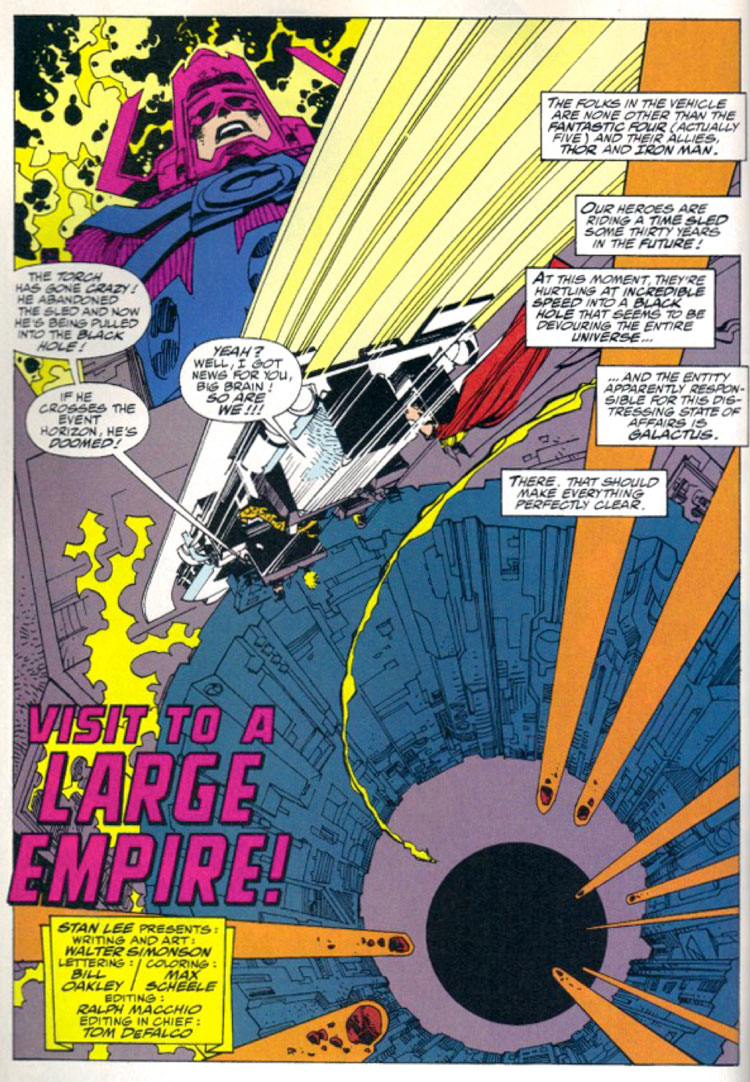 After plenty of twists and turns, including a possessed Human Torch killing a Kang and Reed Richards appearing to lose his mind and take the gang on a suicide run, the day is saved via the Ultimate Nullifer, which was the inspiration for the whole story.

Simonson said, “I wanted to do something that hadn’t been done before” (mission accomplished) but added, “…part of the inspiration was trying to figure out what the Ultimate Nullifer would do if it were activated. What was it really?” He fondly recalled the original Kirby/Lee Galactus story when the Ultimate MacGuffin bailed out the FF and Earth. 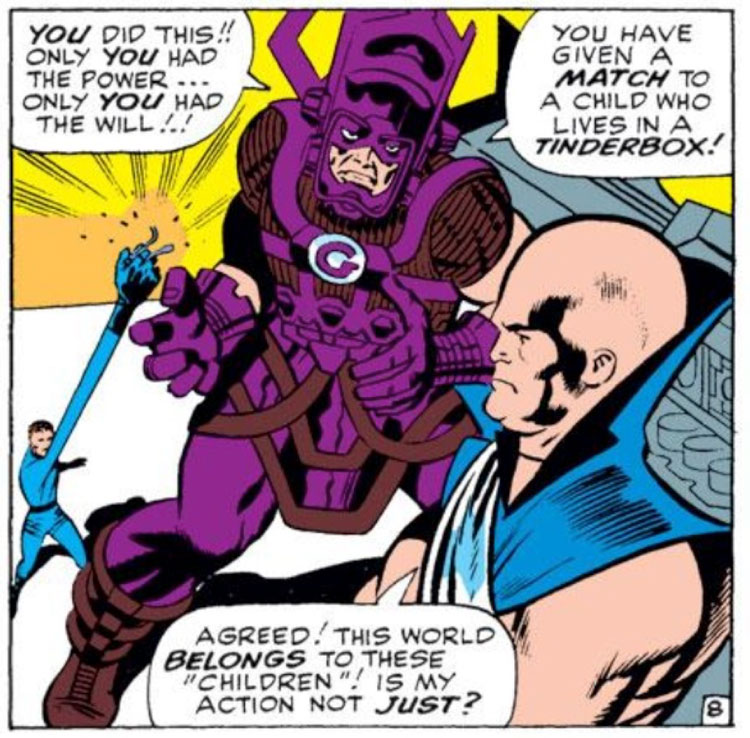 In Simonson’s tale, as Galactus uses the Nullifer — retrieved by the FF from Galactus’ home — Simonson uses ever-expanding whiteness to show the blotting out of reality (which is a good thing for this polluted future timestream). 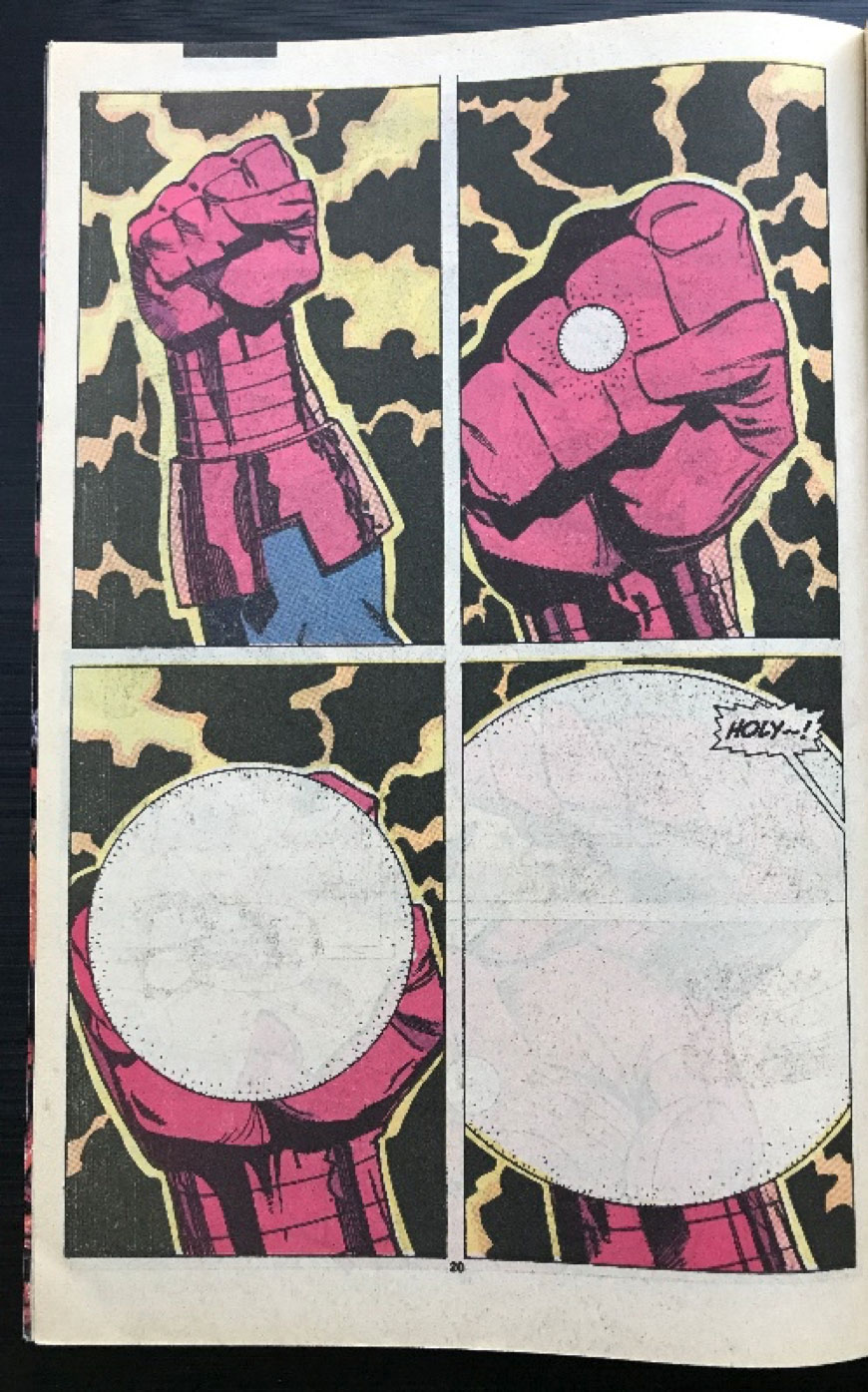 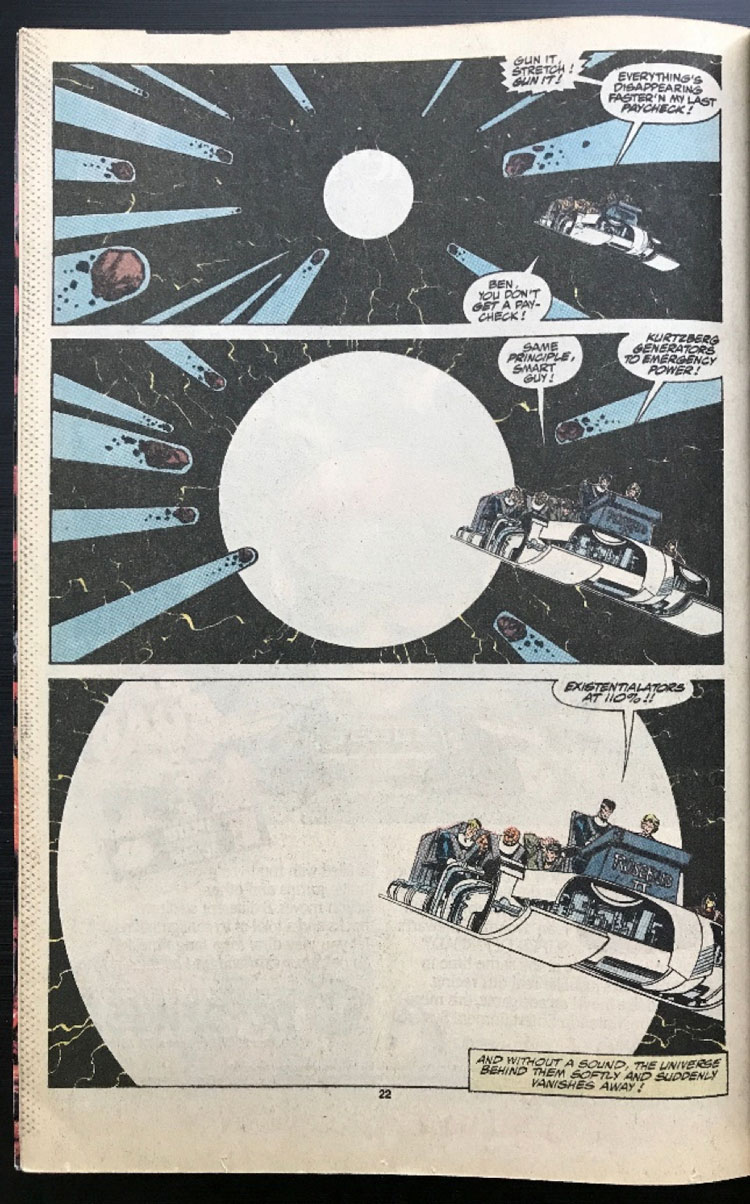 Unfortunately, the reality of crappy paper interfered with step three. The effect of this spread is marred by an ad for the Dick Tracy movie bleeding through: 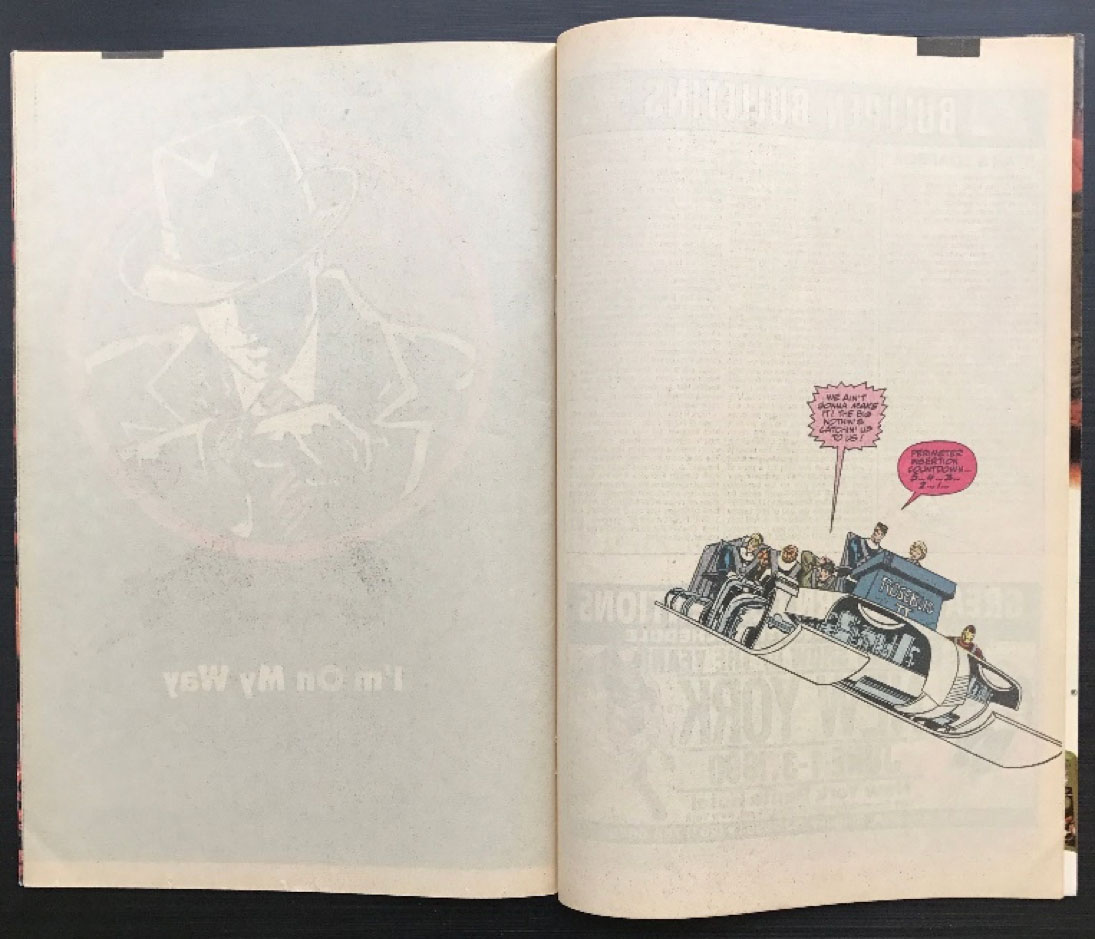 As Simonson said, “It looked like the FF were flying away from Warren Beatty.”

In a reprint, the all-blank, Beatty-tastic page was cut entirely, which still irks Simonson: “I made an artistic and storytelling decision and some knucklehead in production or editorial decided, eh, no reason to waste that.”

The notoriously nice Simonson quickly added, “I’m sorry I called you a knucklehead, but I still think whoever you are, you were a knucklehead.”

Super-genius Reed Richards is the anti-knucklehead, and Simonson delighted in giving Reed lines like, “We are standing in a tesseracted volume analog, created by a controlled spacial application of the radical cube. A pocket dimension at right angles to real space created to contain the Rad-D.”

“Rad-D” is short for radical dodecahedron, Reed’s improvement on the radical cube, which had been used to open the Negative Zone and stubborn jar lids.

Other great Reed lines that I’m considering using on my next date:

“We’re losing some of our probability!”

“We’ve entered an area of shifting probabilities where the phantoms of unrealized futures are constantly revised!”

“I like technobabble,” Simonson said, in an understatement. He recalled developing a taste for such absurd jargon working with writer Archie Goodwin on an Alien adaptation that included gizmos such as “redundancy generators.”

When employing similar gobbledygook, Simonson said, “I want it to sound like it means something.” In the case of the Kurtzberg generators, function aside, they sound like exactly what they are: “a tip of the hat to Jack” via his birth name.

Maybe the weirdest element of this run is the status of Ben Grimm. He’s human, which does happen from time to time, but there’s another Thing—who’s really Ms. Marvel (Sharon Ventura). And they’re dating. This is one of the strangest developments in comics since Kirby revealed that tighty-whities are part of Jimmy Olsen’s DNA. 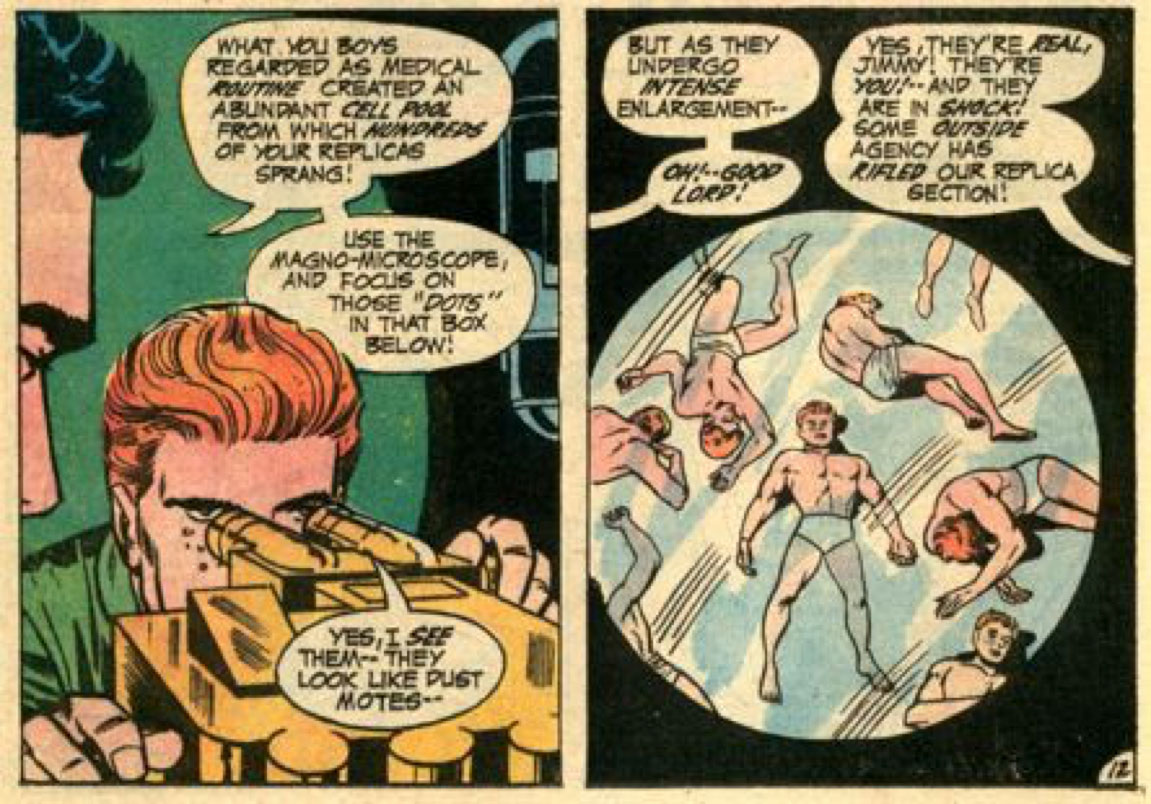 In a coincidence or additional Kirby tribute, the FF end Simonson’s run in similar garb. 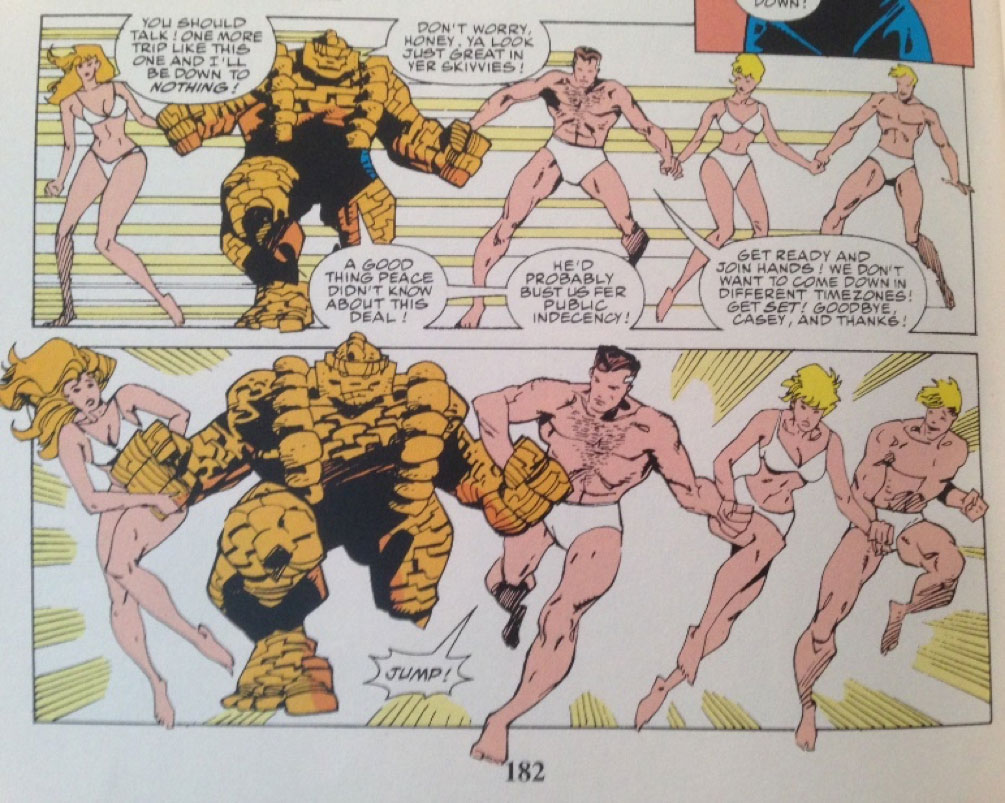 Anyhoo, Simonson inherited the idea of Sharon Ventura being the Thing and Ben Grimm being human from previous creators, and he dug the possibilities of this weird couple: “I sort of liked the idea because it meant the Thing wasn’t the same character he had always been. It was something a little bit different, and that meant that your combinations for storytelling and character interaction were a little bit different as well.” He liked this combination of “the familiar and the unfamiliar.”

The rest of Simonson’s run is similarly big and bananas and timey-wimey. The FF end up in an alternate timeline where Dan Quayle is President and on the verge of nuclear war with a robotic version of Stalin. Then the FF fight dinosaurs due to ending up on, as Reed puts it, “a time lost fragment of the Mesozoic past…the product of some sort of glitch in the time stream.” They get in trouble with the bureaucratic Time Variance Authority, whose name is inspired by the Tennessee Valley Authority, a name with special resonance for Simonson, who was a Tennessean till toddlerhood.

Simonson’s been a fan of time-travel stories since a little after that: he thinks his first exposure to the genre was Murray Leinster’s 1960 collection of short stories Twists in Time. Simonson fondly remembers several of those stories, including one featuring a character who gets a startling message that’s also the title of the story: “Sam, This is You.”

The best single issue of Simonson’s FF run is also his best time-travel story: FF #252, in which Reed and Dr. Doom fight while skipping through time, alongside the rest of the FF fighting Doombots. This comic deserves a spot in the Hall of Awesome alongside other conceptually bold and perfectly executed single issues such as the silent issue of G.I. Joe, the dog’s point-of-view issue of Hawkeye, and the Möbius strip issue of Silver Surfer. 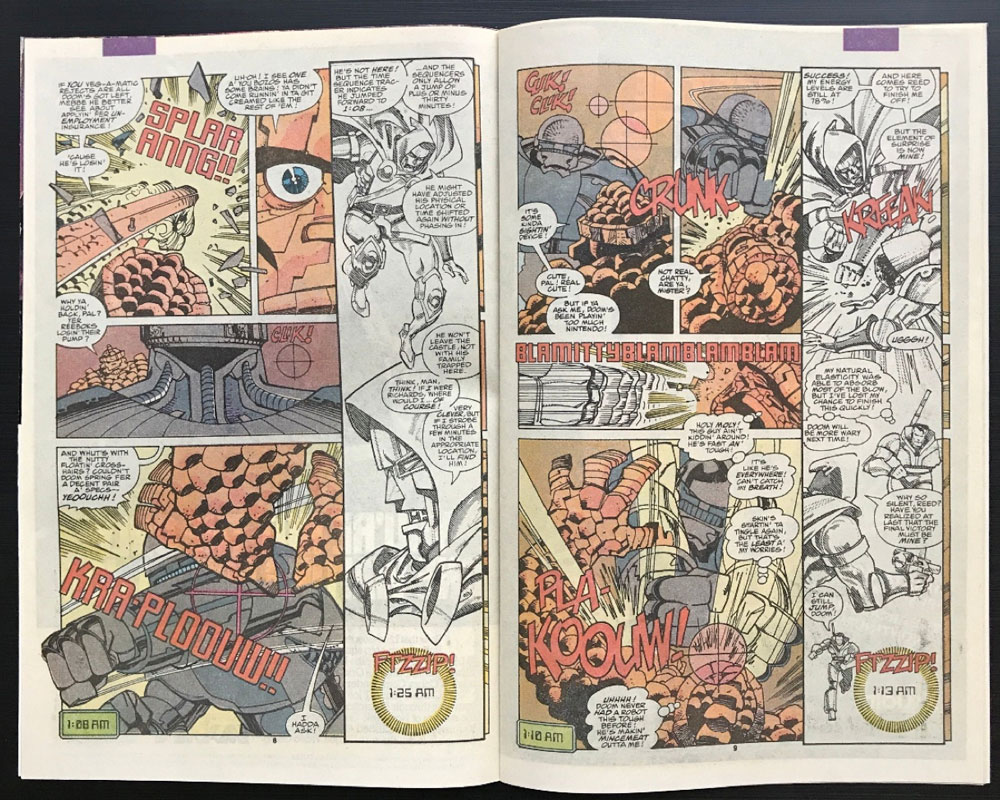 Simonson says part of the inspiration came from Robert Zelazny’s 1969 novel Creatures of Light and Darkness: “In that story there’s a giant time fight that goes on between a hero and a creature fighting in time back and forth through this ruined city…”

Similarly, Simonson shows Doom and Reed battling in and out of time, jumping forward and back to sucker punch and avoid each other, creating a non-linear reading experience you could only do in comics.

Simonson recalls, “I was able to use the reading of a comic book, turning the pages, as a physical act that reinforced the way the time fight actually went, so you had to read the story twice in order to understand anything. I thought that worked out pretty well.”

Damn straight. That issue and these comics as a whole are a banquet of massive ideas, gorgeous art, careful choices, and cosmic scope.

Much like Kirby is in Simonson’s blood, Simonson’s FF run is part of the DNA of many artists, including the wonderful Michel Fiffe. As Fiffe recently wrote:

“Simonson hasn’t been studied or discussed with the same rigor dedicated to his peers Chaykin, Miller, and Moore. It’s odd, considering Simonson applies the same level of craft and thought to his work, if not more, than those giants. One might incorrectly conclude that Simonson never toils in the realm of the Deeply Personal, perhaps making it easy for “scholars” to brush his work aside.

“Consider this: his interest in history, mythology, and sci-fi are indeed fuel for his profound expression. If you follow that train of thought, it’ll be easier to see and accept why some of his best works were for corporate properties – a system of labor that held the keys to characters through which he could explore his interests and play with the form while making a living. ‘Creator-owned’… sure, that’s nice, but Kirby creations seem to be the most powerful conduits for Simonson’s personal vision. There’s a clear buzz when he’s been working on specific titles; compare his THOR to his X-Factor, ORION to any job he did before and after, or compare what you’ve seen above to anything going on then or going on now, with anyone.”

FF was obviously a labor of love for Simonson, who praises Kirby and Lee’s original run, which featured “an amazing density of ideas” and stories “full of character and heart and fun…That was the kind of model I wanted to emulate in both Thor and the Fantastic Four. I enjoyed doing the FF. I’m sorry I didn’t do it longer.”

He added, “I liked my robotic Stalin as well.” 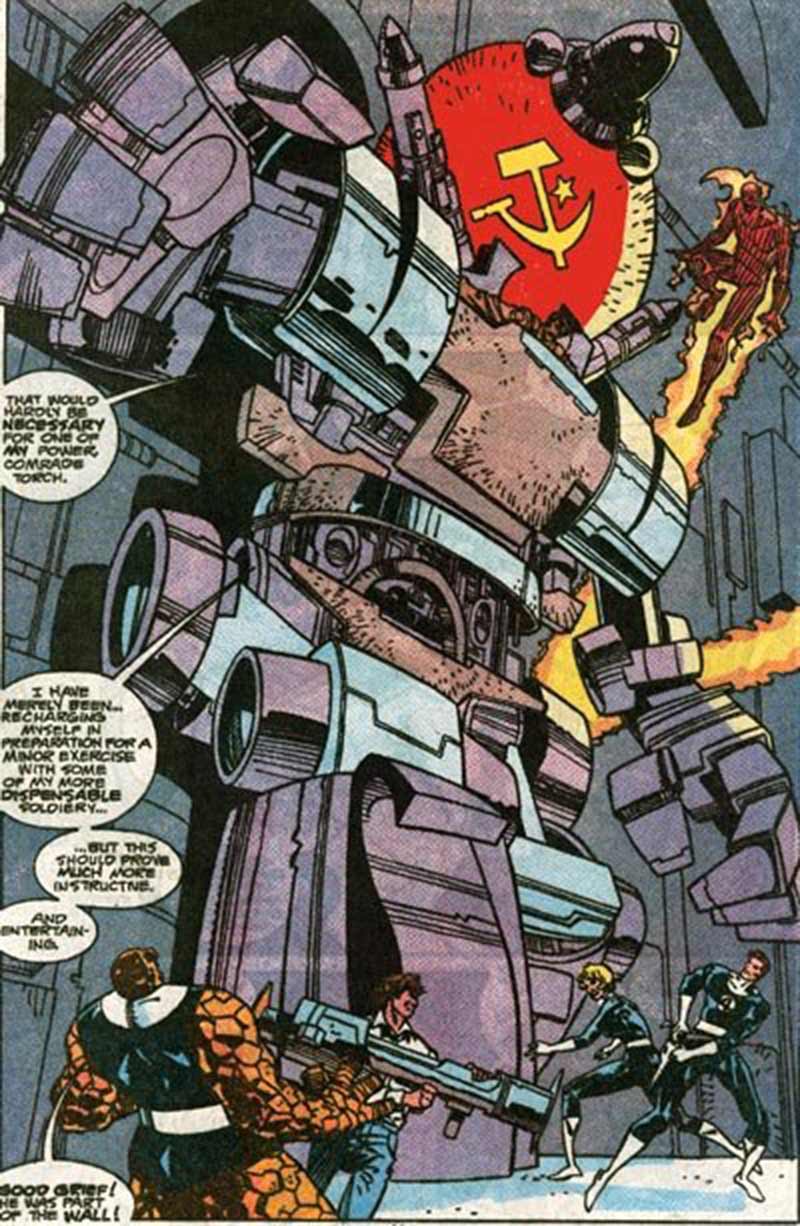