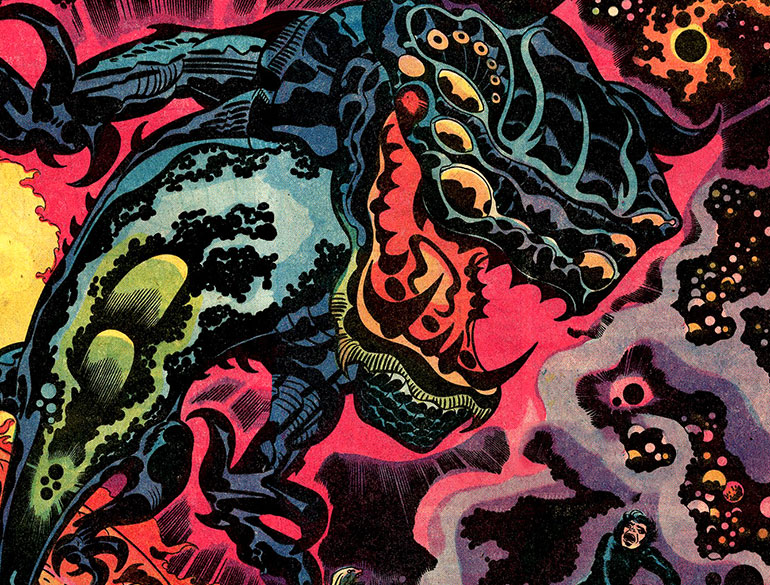 It’s been a tough couple of years.

I’ve had a bunch of family problems. My so-called career as a freelance writer has been dicey. I wrote a book that flopped. My dog, contrary to my commands, keeps aging. The country and planet are going to hell in an orange bucket. A mid-life crisis is looming, if not raging.

But I’ve managed to keep a shred of sanity thanks to my rediscovery of Jack Kirby. He’s the closest thing I have to religion.

While I also get an energy boost from other artists — Geoff Darrow, Jim Steranko, ACO, Walter Simonson, Tom Scioli,  Michel Fiffe — the electric charge from Kirby feels particularly heaven-sent. Maybe that’s because Kirby loved to create what Charles Hatfield (in his terrific book Hand of Fire: The Comics Art of Jack Kirby) calls “The Technological Sublime.” Kirby persistently, incessantly, and gloriously mixed science fiction and mythology and I-don’t-know-what to create characters and situations that would make Volstagg put down his fork and say, “Whoa.”

For example, look at these beautiful pages from Kirby’s weird and wonderful 2001: A Space Odyssey series, which followed his magnificent adaptation and somehow ended up introducing Machine Man. From the second issue: 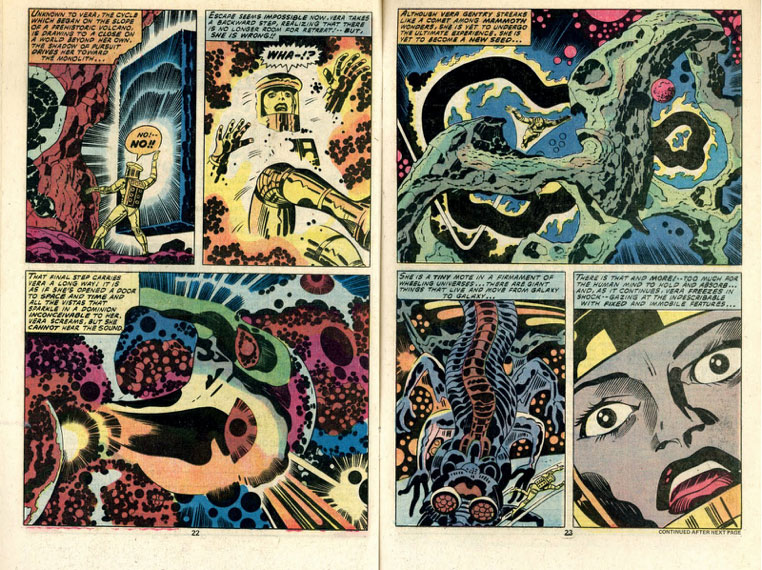 I’ve never taken LSD or had a religious experience, but I doubt the brown acid or the Good Lord could compete.

That 2001 series was part of Kirby’s Marvel homecoming in the mid-seventies, which included a return to the Black Panther and Captain America, the gonzo insanity of Devil Dinosaur, and his most ambitious comic of the period — though not of the decade —The Eternals. This creation myth, in which massive, inscrutable space gods called the Celestials seeded Earth long ago, creating Deviants and Eternals as well as humans, was a visual feast. This might be my favorite Kirby spread ever: 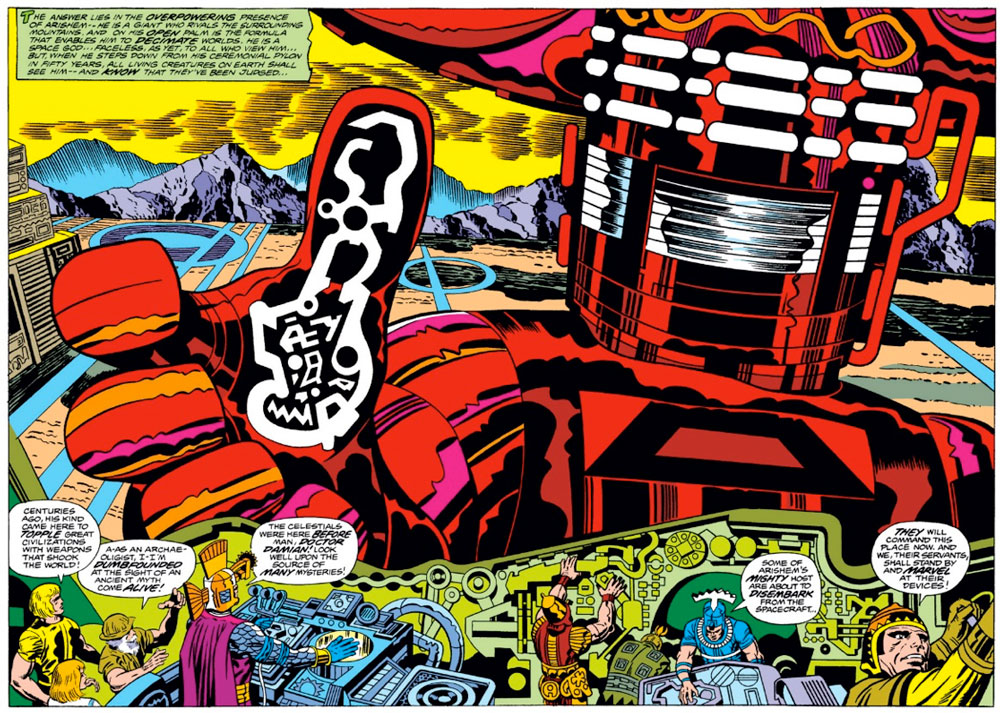 When I look at this scene, which packs in more storytelling than most trade paperbacks, I have a sense of awe mixed with a sense of “Jesus, this is bonkers.”

Even Kirby spreads that aren’t cosmic or myth-y can create a sense of “holy-shitness,” emphasis on “holy.” Take this two-page spread from Mister Miracle: 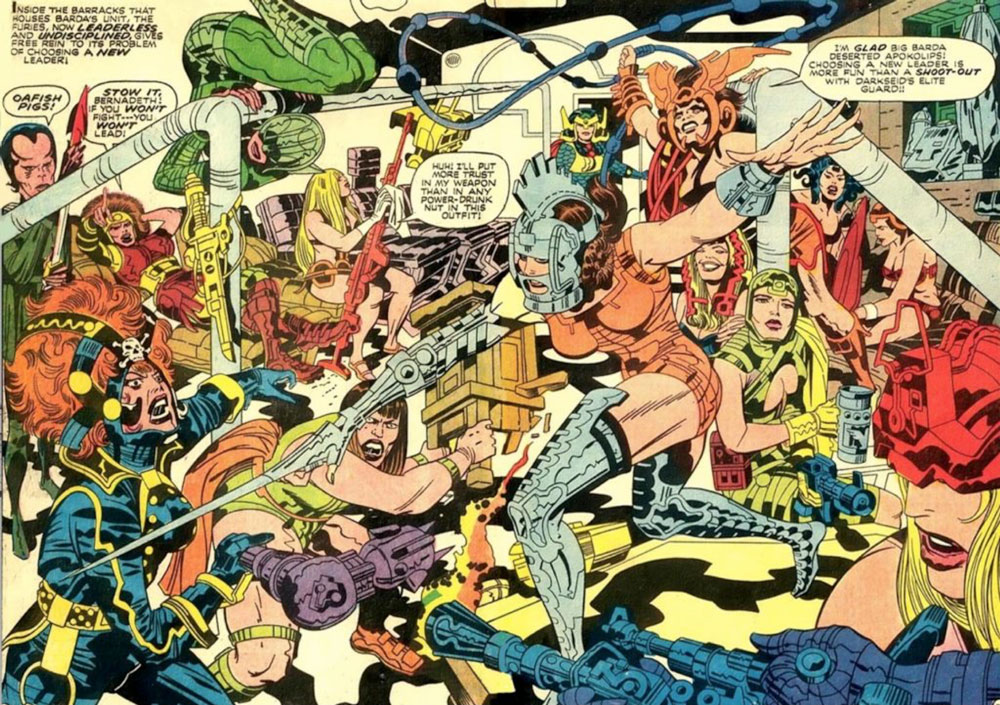 You could make a whole series based on just these two pages.

(In fact, why don’t you do that, DC? A Kirby-esque series about the Furies of Apokolips would be awesome. It would be like Kirby’s version of GLOW, but with more murder.)

When you look at stuff like this, it’s easy to forget your problems, which might be part of why they were created in the first place. Kirby had plenty of problems. He got dicked around by Marvel and DC over and over again. He saw Stan Lee become a celebrity, based on work created primarily by Kirby, who rarely received proper credit or money. He had to fight to survive since he was tyke, growing up in the gang-ridden Lower East Side.

And he was likely dealing with post-traumatic stress disorder from his stint in the army, which involved killing Nazis, helping to liberate a concentration camp, performing the dangerous task of a scout, and almost losing his feet to frostbite. As Ed Piskor said in the wonderful Kirby100 collection, wondering how much of Kirby’s legendary productivity was tied to trauma: “Poverty and violence is a good recipe to stay indoors and keep grinding.”

In that same book, Tom Scioli said of “The Pact” (New Gods #7), “You could build a religion around this comic.” The same is true of Kirby in general. In the year of our demon lord 2017, which feels like a sentient Apokoliptian firepit, I need something other than coffee and beer to get me through the day. I’m allergic to actual religion, but not to the idea of something bigger than myself, even if that bigness was all in the head of a little man who grew up hard but somehow ended up killing Nazis and building universes.

Jack Kirby is my religion. Amen.