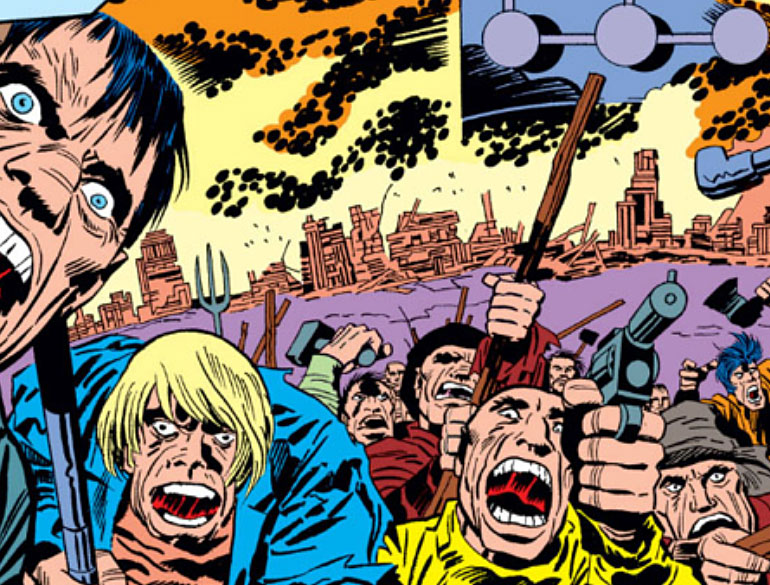 Who needs Small, Medium, and Large when Jack Kirby gave us Peanut, Dumpling, and Big Daddy?

So I’m going to be talking about Jack Kirby at a conference for word nerds. 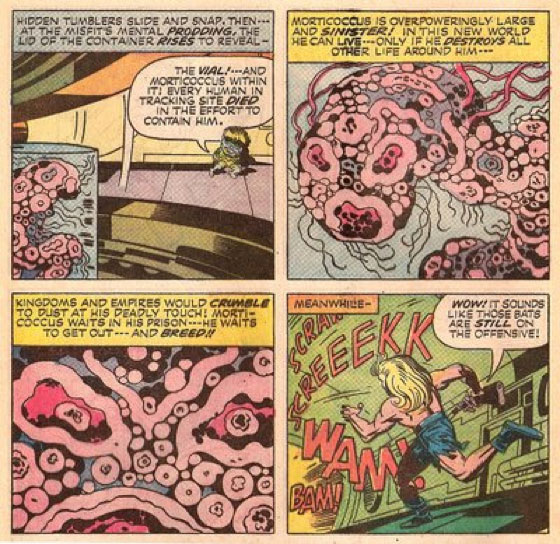 Jack Kirby — co-creator of the Black Panther, the Hulk, the Avengers, the X-Men, Captain America, and hundreds of other characters — is considered the most important creator in comic book history. Part of that creation was the naming of characters. My presentation will look at Kirby’s names for people, places, processes, and gizmos from the 1970s, when he was writing, editing, and illustrating his comics rather than collaborating with a writer, so the names are most definitively Kirby coinages. These include alliterative names (Mister Miracle, Willie Walker, Victor Volcanum, Virmin Vundabar, Wonderful Willik), names that reveal character (Scott Free, Baron Von Evilstein, Kreetin), compounds (Astro Force, Mega-Rod, Boom Tube), altered spellings (Apokolips, Darkseid, Desaad), and word blends (Homo Disastrous, Morticioccus). This look at Kirby’s 1970s names will shed light on the broader categories of comic book and superhero names, as well as naming in general, which is so prominent in our brand-happy world.

In preparation for my ride through the Boom Tube to academia, I’m rereading my 70s Kirby collections, scribbling down every name, and figuring out how to talk about them. Most names fit in the categories described above. Some fit in other categories, such as religious and mythological-inspired names (Promethean Galaxy, New Genesis, Orion). But a few don’t fit anywhere except in the most absurd asylums of the comic multiverse — such as Jack Kirby’s sizes for the Madbomb, which are described here: 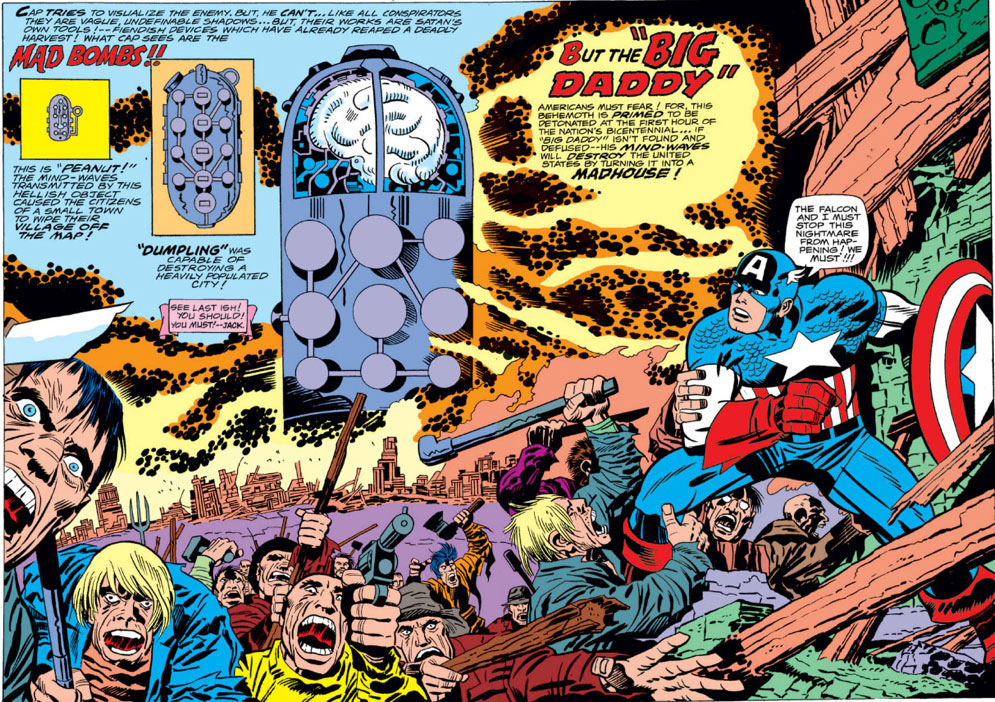 I suppose I should focus on the fact that the Madbomb, created during Kirby’s return to Marvel in the mid-seventies, is a frighteningly relevant concept for today’s orange-pocalypse, with President Madbomb driving the country crazier and crazier, all to protect himself and line his pockets.

I could, in theory, write a strong column about how Kirby, once again, saw the future. I would be thrilled to write half as great as piece as Elana Levin (who will be featured in a future Kirbyology column) did on another prophetic Kirby character, Glorious Godfrey. Writing such an analysis might even put me in the proper mindset for my academic presentation.

But screw it, I can’t get over the fact that the three versions of the Madbomb — capable of wiping out a village, city, and country, respectively — are named Peanut, Dumpling, and Big Daddy, preposterously. And I don’t want to get over it anytime soon.

How did such absurdities make it to print? Well, in the seventies, Kirby was basically an auteur writing, penciling, and editing his own work. He lived in California, away from the major comic company offices. He handpicked his primary inker, Mike Royer, who was a huge improvement over the professional-if-not-thorough Vince Coletta.

For the most part, Kirby was making comics and mailing them to DC or Marvel with very little editorial input, excluding the butchery of Superman’s head. In the era of Fonzie and Watergate, Kirby’s once-in-the-multiverse imagination was allowed to run free, producing work that was far wackier and more ambitious than his work with Stan Lee (or Joe Simon for that matter). And part of that freedom is that if Kirby decided to classify Madbombs as Peanut, Dumpling, and Big Daddy, then that was just how it would be.

Wacky as these terms seem, and are, they do have roots in English, as revealed by my favorite non-Kirby book, the Oxford English Dictionary. Since at least the 1830s, peanut has meant “Insignificant, trivial, worthless; tiny, puny, undersized.”

This sentence from the Congressional Record in 1892 demonstrates this use: “This country is not a peanut institution; it is a great country.”

Raymond Chandler used the term similarly in 1940: “Hell, I thought he sold reefers. With the right protection behind him. But hell, that’s a small-time racket. A peanut grift.”

Meanwhile, big daddy has been a term for the hugest of the huge since the late 1800s. As for dumpling, the fossil record of lexical appetizers is bare.

But precedent or no precedent, we need more Kirby classification, or at least I do. I propose Peanut, Dumping, and Big Daddy to be the new standard terms for the following and more:

For example, you could say, “I’m having peanut anxiety about the big daddy blizzard that’s on the way, which makes it hard to focus on my Dumpling of Arts program.”

Or, “I was a big daddy baby, but I wear peanut sizes as an adult. I owe dumpling in debt.”

You could even tweet, “I’m drinking a big daddy beer because this country is a big daddy clusterfuck, and my hope for the future is less than peanut.”

This is a math system even Americans can understand, and while it won’t do much for our GRE scores, it is an anti-depressant. I defy you to think about Madbomb sizes and not feel happy—big daddy happy.