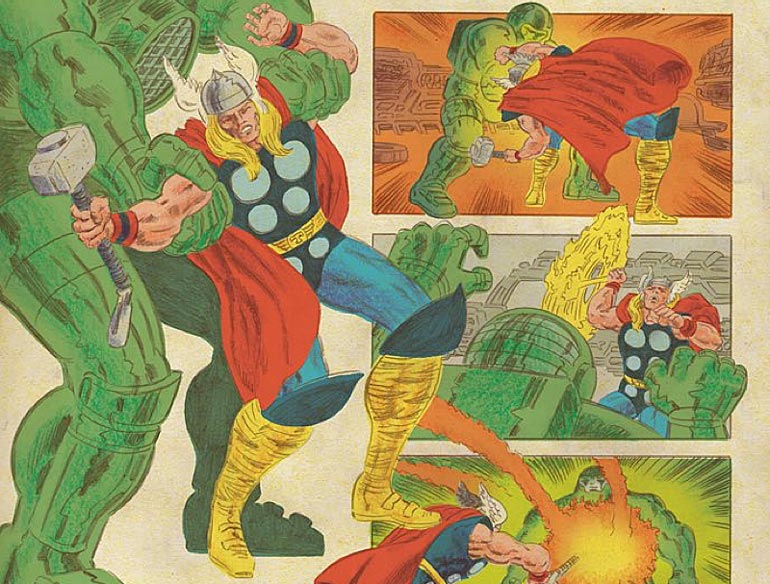 All comic book artists are at least a little Kirbyesque, whether they know it or not. Jack Kirby’s insane resume of superhero, war, crime, sci-fi, and romance comics makes his influence inescapable.

But the most blatantly Kirbyesque artist is probably Tom Scioli, who wears Kirby’s influence on his sleeve in projects such as Final Frontier, Godland, and American Barbarian. But Scioli is far from a cover band. In projects such as the revelatory Transformers vs. G.I. Joe, he takes Kirbyism into wild new realms never explored by Kirby, offering the ultimate compliment to the relentless innovator. I was lucky enough to chat with Scioli about his ongoing Kirby biography, Kirby’s life and art, and Kirby’s terrific run on Thor, which feels timely for some reason. 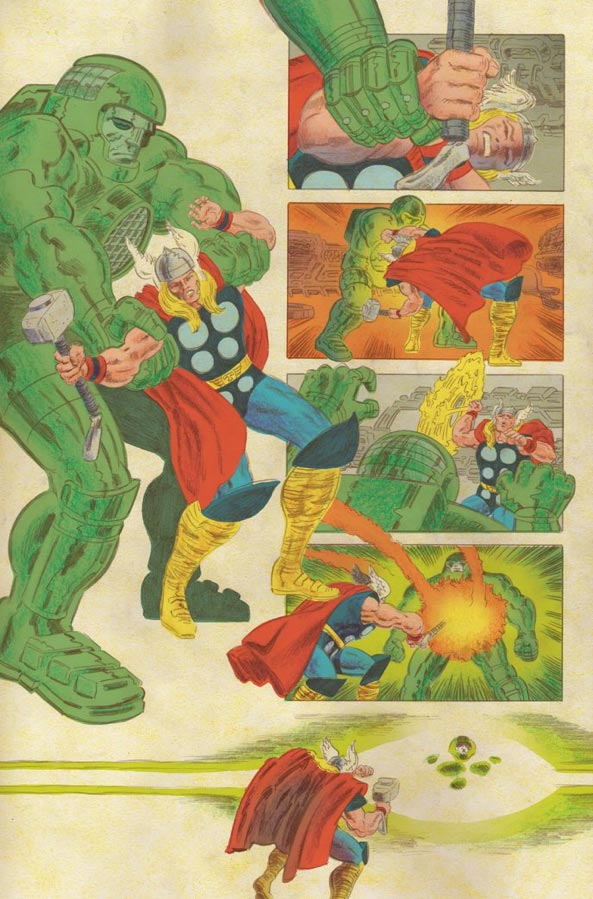 Thor was Scioli’s first Kirby, discovered in the eighties via a reprint edition, when the writer/artist was around middle-school age. Scioli said the work, which included mild-boggling adventures such as the Mangog’s attempt to get his mitts on the Odinsword, “blew my mind — I read it over and over and over.”

He was mesmerized by “the rich mythology—the closest thing to it was Superman’s whole Kryptonian mythos.”

But, as Scioli pointed out, the byzantine mythology of Krypton took decades to evolve, via dozens of creators. Kirby built his Thor cosmos in only a few years, and he got even faster at universe-building in the 1970s.

Most of Kirby’s Thor run is inked by Vince Colletta, an inker despised by most Kirbyites. If Colletta has a family, I hope they never read an issue of Jack Kirby Collector, as nearly every Kirby-lover slams Colletta for leaving out huge parts of Kirby’s pencils and not being in the same league as inkers Joe Sinnott and Mike Royer.

But there’s one contradiction to the “Colletta sucks” argument: he inked most of Kirby’s Thor, which looks awesome. Scioli agreed that Thor was, “the one comic that plays to Colletta’s strengths.”

Maybe Colletta was still leaving things out, but he more than did justice to some of Kirby’s most satisfying work, including the insane headgear of Odin, which was never the same twice. 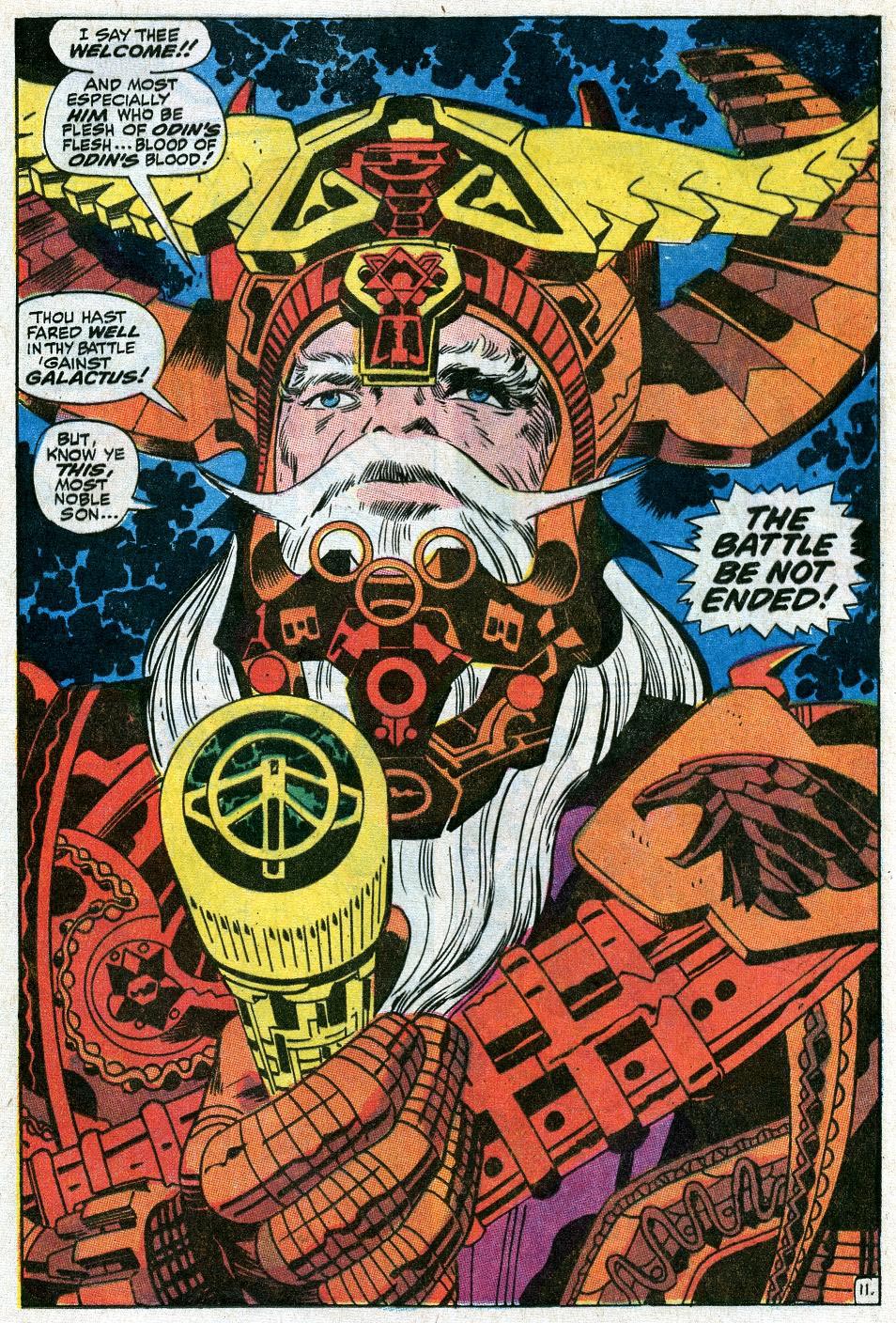 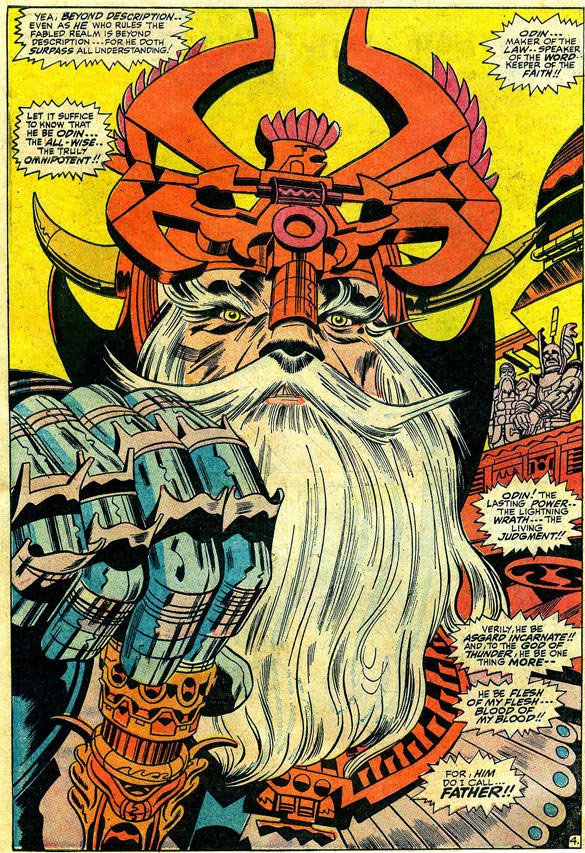 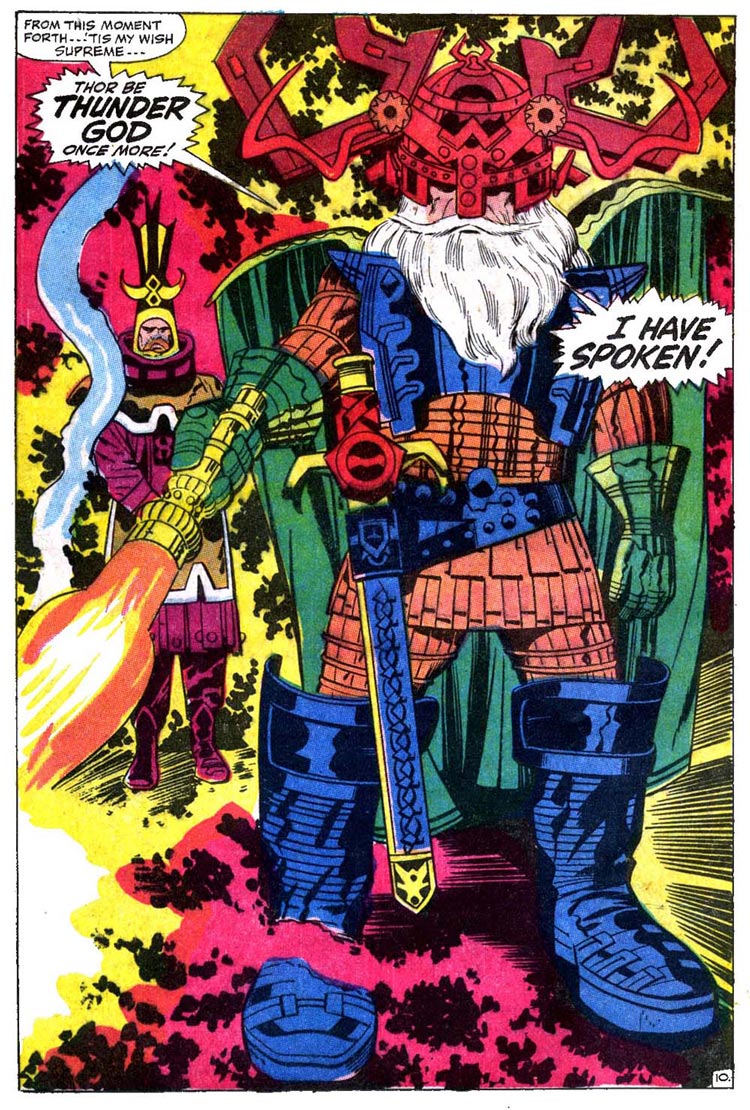 Another Kirby, inked by Vince Coletta.

Maybe it’s because I’ve been overdosing on Kirby’s DC work lately—especially The New Gods and Mister Miracle—but it’s hard not to read Kirby’s Thor as prelude to the Fourth World. The massive armies of trolls, cataclysmic battles of gods, and sheer size of the story (like when Galactus battles Ego the Living Planet) has a majesty that Kirby would refine with Orion, Darkseid, Mister Miracle, Doctor Bedlam, Bernadeth, and company.

Legend has it Kirby intended to kill off the Asgardian gods at Marvel, then launch the Fourth World there, but he started withholding the good stuff as his relationship with Stan Lee and Marvel soured. Despite the different publishers, Kirby’s tales of the old and new gods fit together like two halves of a pop-cosmic bible.

Kirby’s Thor is a run you can judge by its covers, which are gorgeous. The simplicity, the power, the perspectives…man. 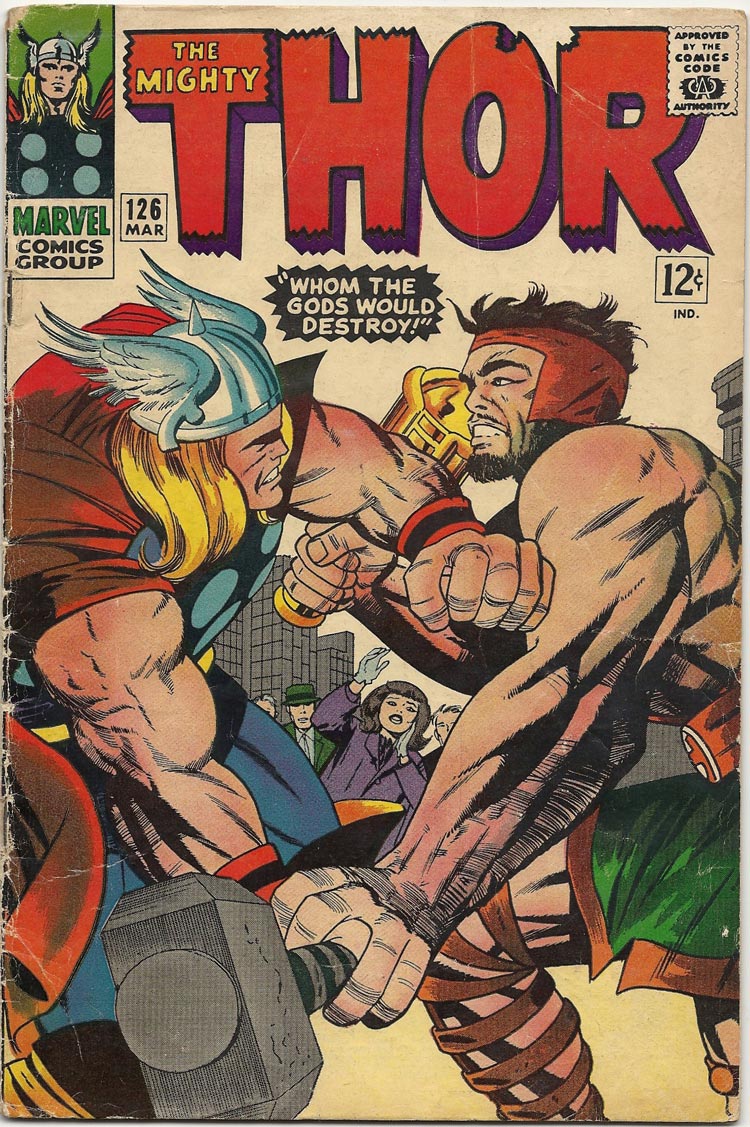 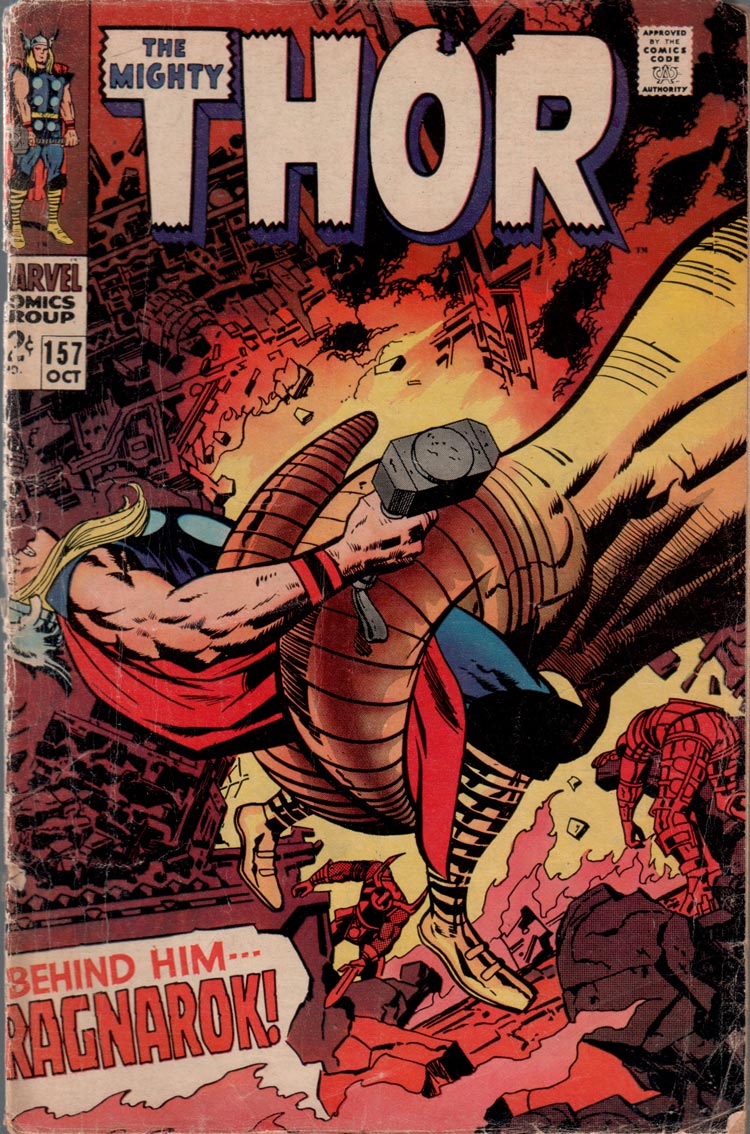 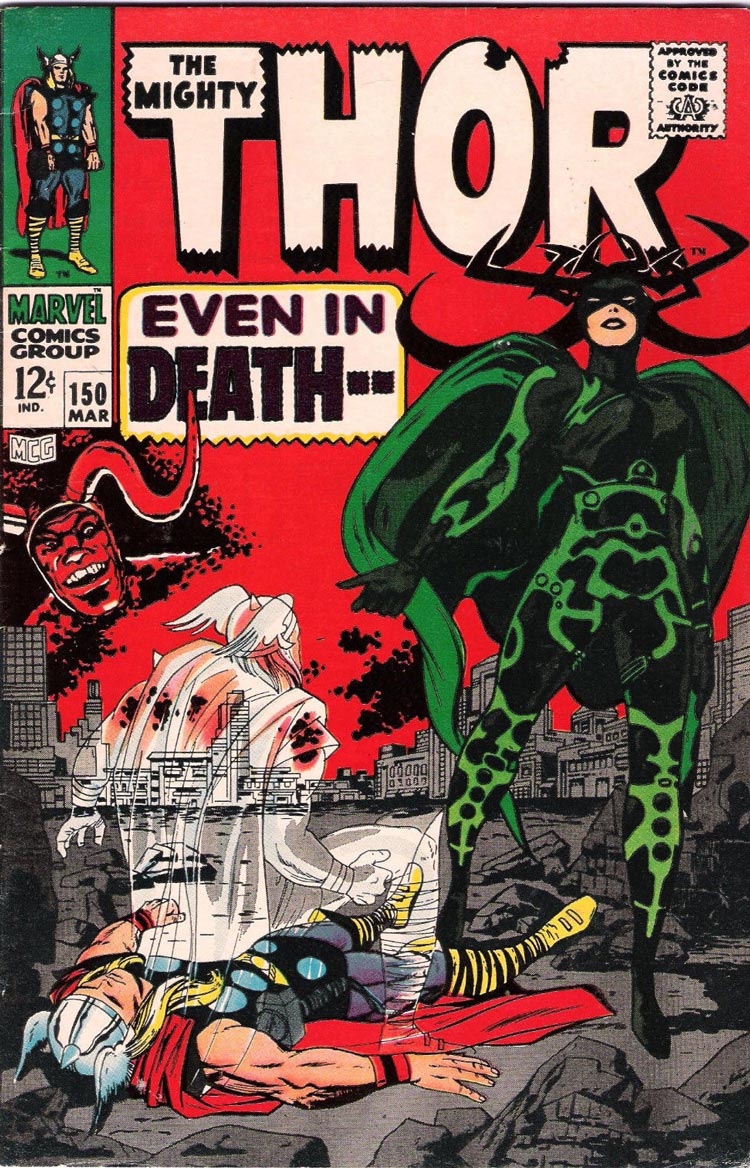 This shit should be in a museum. Increasingly, it is, thanks to the Jack Kirby Museum and Charles Hatfield.

I asked Scioli something that’s been on my melon for a while: How do you balance having an obvious influence like Kirby with being your own artist?

Scioli said, “when you have that strong an influence, you have to work through it,” and then sheepishly compared his artistic growth to a snake swallowing a rat (he apologized for comparing Kirby to a rat and swears he is not a snake).

In an image familiar to lovers of nature and comics, the poor rat makes an obvious, slow-moving bulge as it passes through the snake, until there’s just a snake and the rat has disappeared through nature’s boom tube.

If you look at Scioli’s career, this comparison works. In his early work, the bulge is pretty prominent. Early Scioli comics like Freedom Force could almost be unearthed Kirbys. 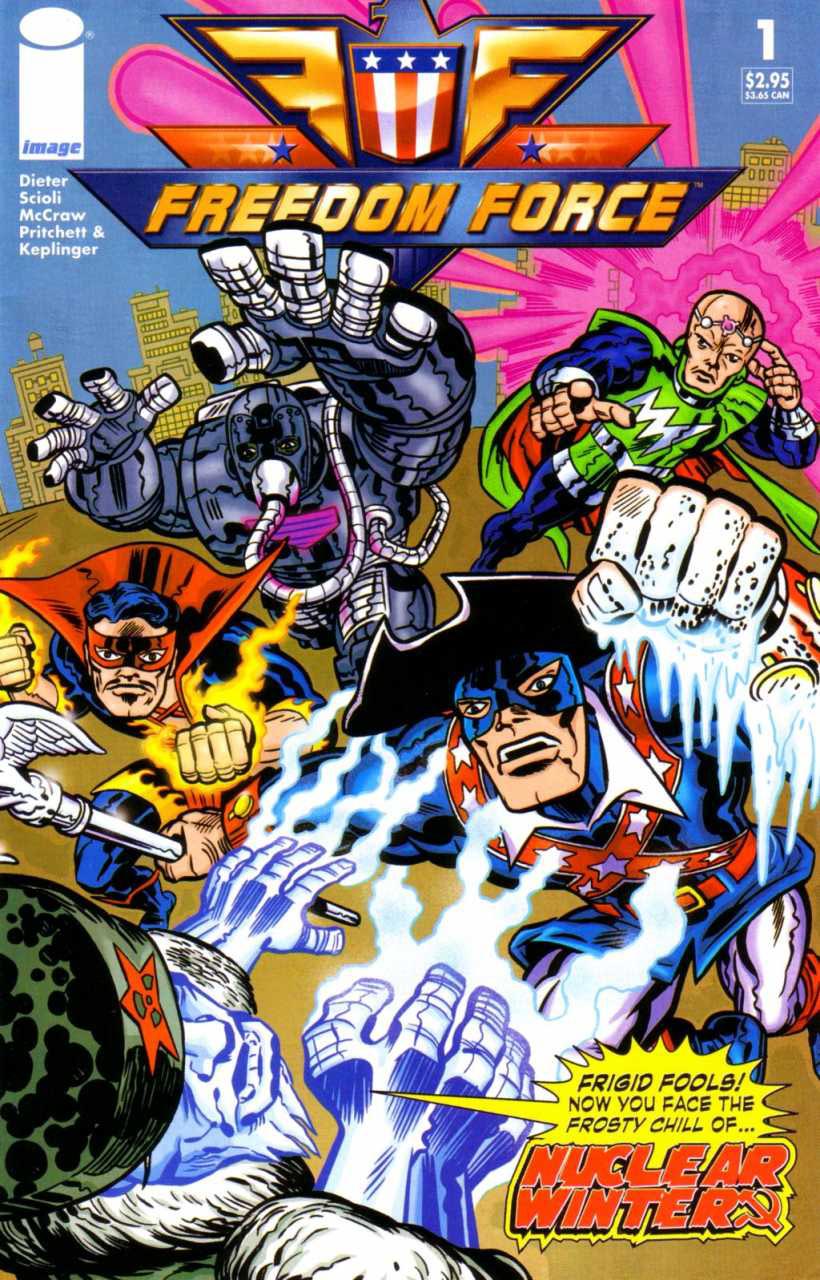 But in recent comics, the artistic digestion is complete. For example, this Transformers vs. G.I. Joe spread has Kirby in its veins, but only Scioli could have pulled off this particular Hasbro-tastic mayhem. 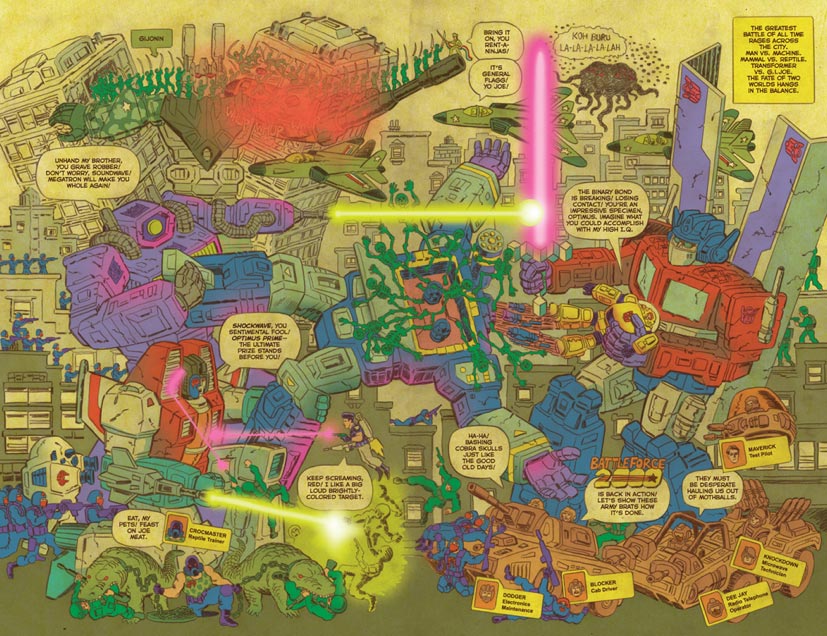 Scioli is repaying his debt to Kirby in a new way these days: by telling the King’s story in an online biography. The opening chapters, built from Kirby interviews, show his immigrant parents, rough childhood, discovery of science fiction, and other milestones for young Jacob Kurtzberg, including being a newsboy: 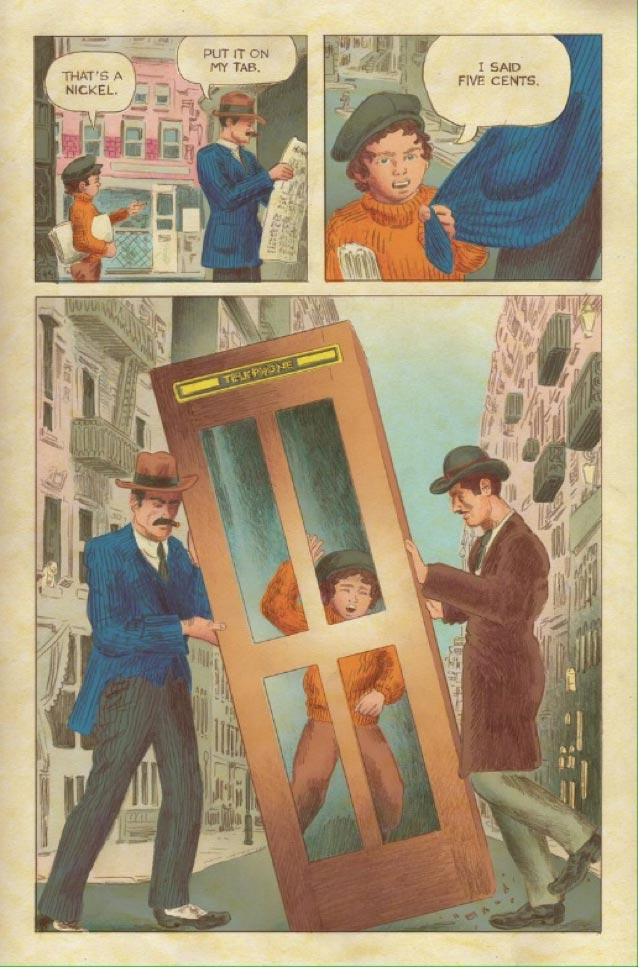 Ironically, this may be the least Kirbyesque thing Scioli has ever done. As a creator, Scioli has leaned toward wild escapism, much like Kirby himself. Given the rough circumstances of Kirby’s life as a poor child and World War II soldier, he “desperately needed escapism,” Scioli said: “He escaped into his bunker—his drawing room, his basement. He stayed there and lived in his fantasy world, and we’re the beneficiaries of it.”

Damn straight we are.

It’s impossible to imagine Tom Scioli’s comics without Jack Kirby. But hell, you could say the same thing about Star Wars and half of pop culture. Scioli’s absorption of Kirby, much like Kirby’s reinvention of the Norse myths, is a lesson in how influence vs. originality is not only a false dichotomy, but a remorseless, lecherous, treacherous, kindless dichotomy. 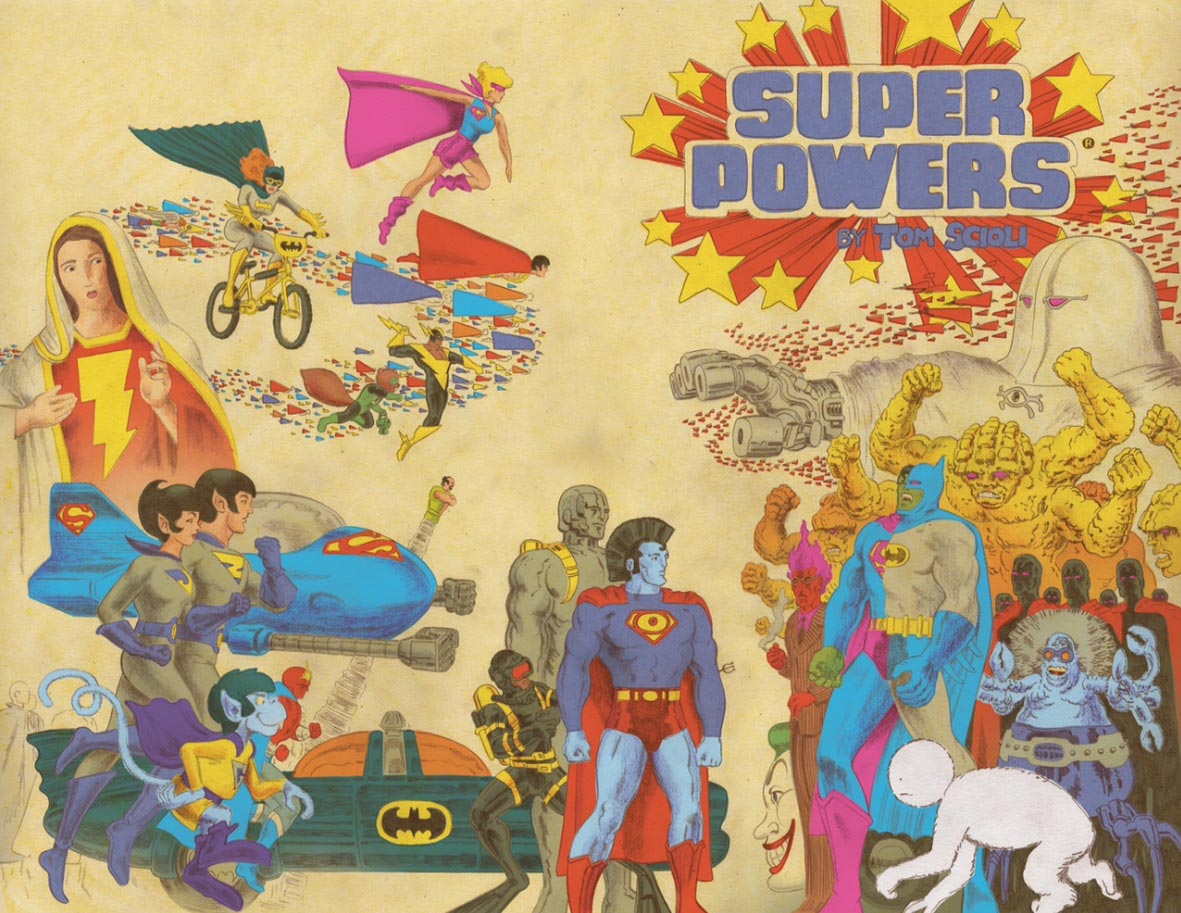 We’re all standing on the shoulders of giants (hopefully not Frost Giants) and the glory of a creator like Kirby is that he created playgrounds vast enough for us all to play in, as comic book creators, fevered admirers, or desperate primates just looking for a little relief.