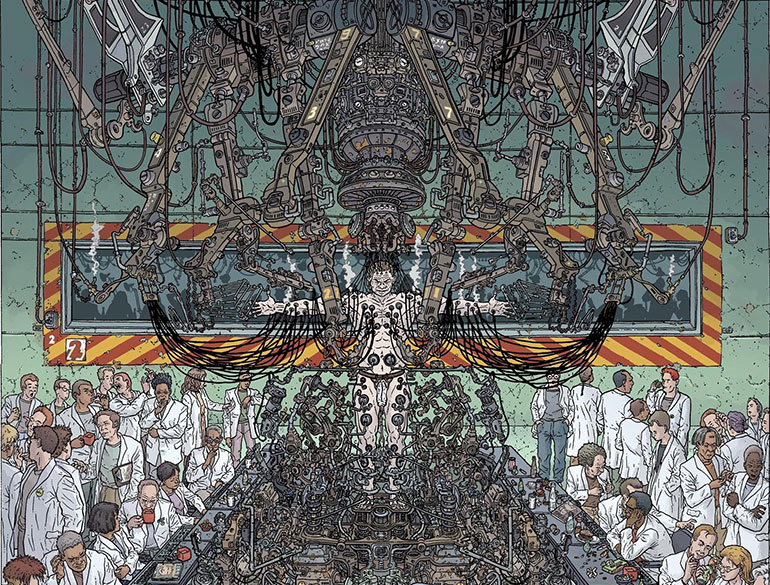 Aside from their prodigious, unearthly imaginations, they wouldn’t seem to have a lot in common — though they did share a workplace for a while, toiling in animation for Hanna-Barbera. The experience wasn’t a creative peak for either, athough it honed Darrow’s skills and gave Kirby health insurance, plus more respect than he was getting in comics at the time. In an alternate universe, there’s a long-running Darrow-Kirby cartoon — perhaps the Cosmic Shaolin Cowboy — that makes the rest of pop culture look like a doodle on a napkin.

But aside from working in animation and making some of the best comic books ever, Darrow and Kirby do have one specific thing in common: they make machinery like no machine has ever machined. Darrow gizmos and Kirby gadgets aren’t much alike — except in their spectacular imagination.

Kirby machines are consistently baroque, byzantine, and bonkers. I’m not sure what the first example of Kirby tech is, but I suspect his technological vision started getting wider and wilder with 1966’s Galactus Trilogy, which included Galactus’ home and the planet-scarfing gizmo the big purple guy was building on the Baxter Building: 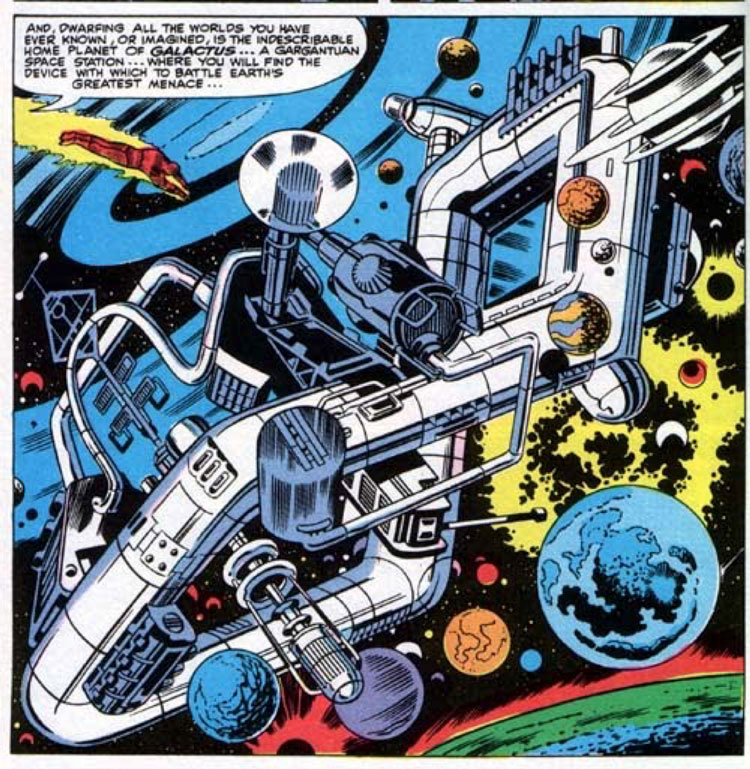 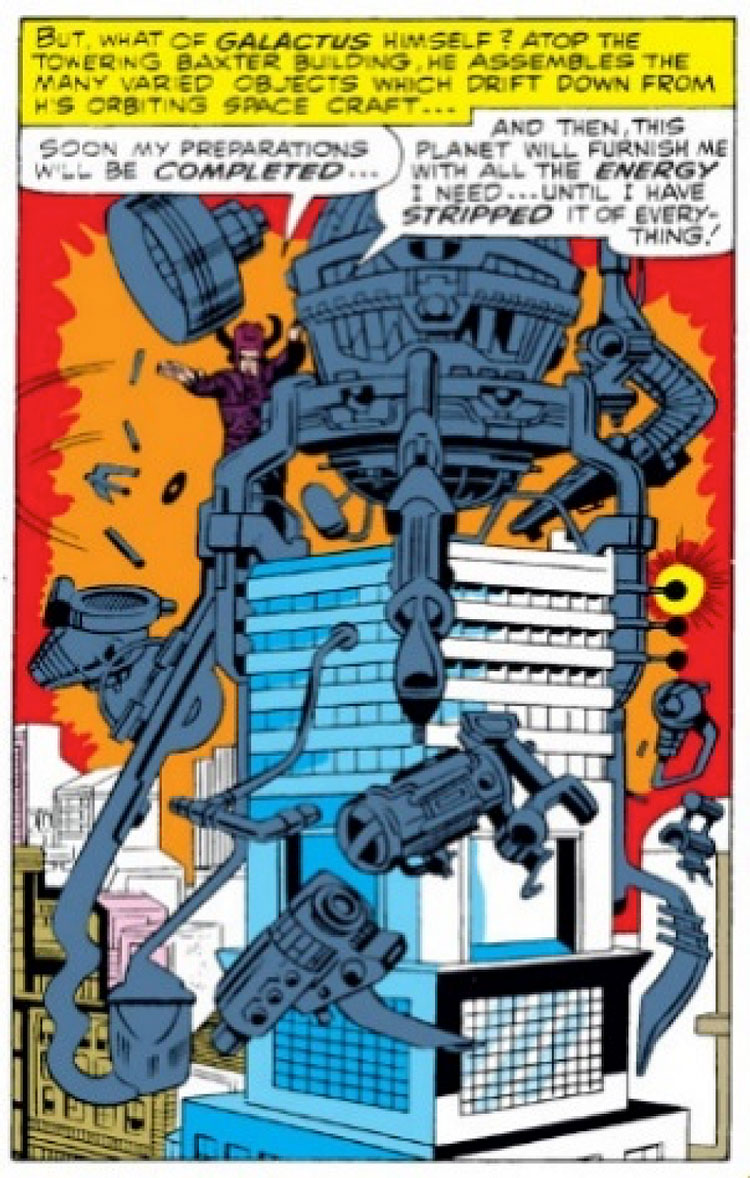 Those 1966 Fantastic Four issues represented a peak in Kirby’s creativity — beginning in late 1965, in one year and just one series, Kirby and Lee came up with Galactus, Annihilus, the Silver Surfer, the Inhumans, and the Black Panther. Outsized gizmology was part of a larger creative outpouring.

After that, you start seeing crazy devices in just about every Kirby comic. I sincerely hope no real Nazis have access to technology such as the Red Skull’s: 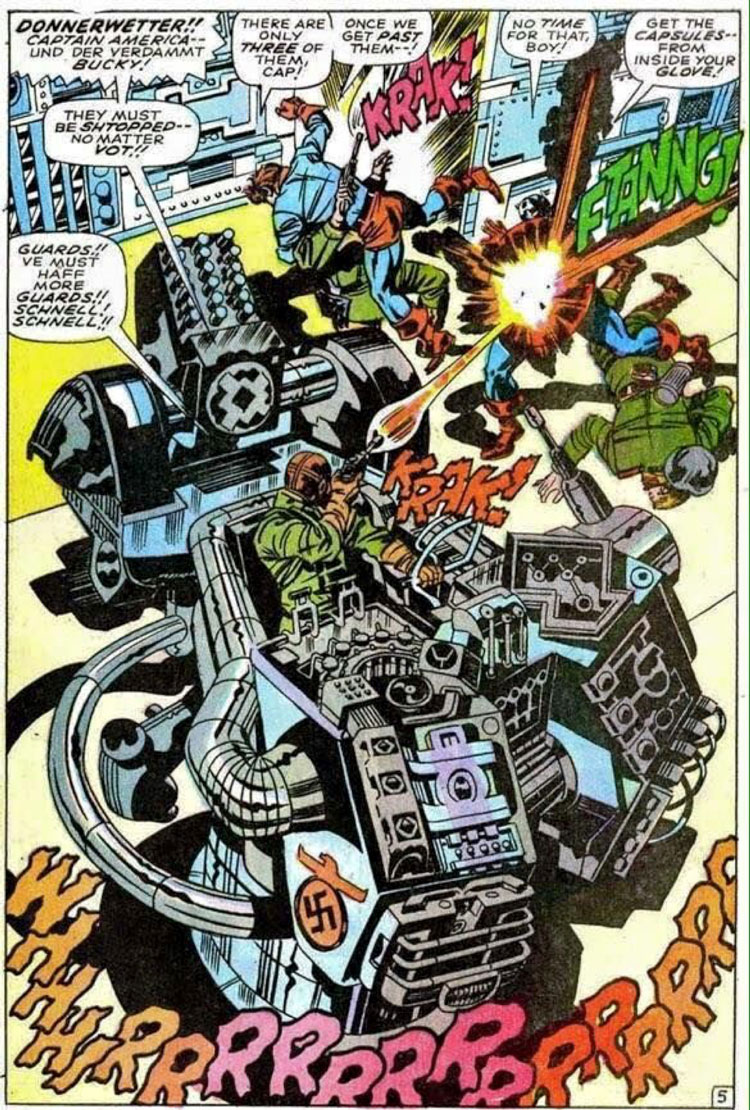 On the other hand, I feel every hard-working demagogue deserves a desk like Dr. Doom’s: 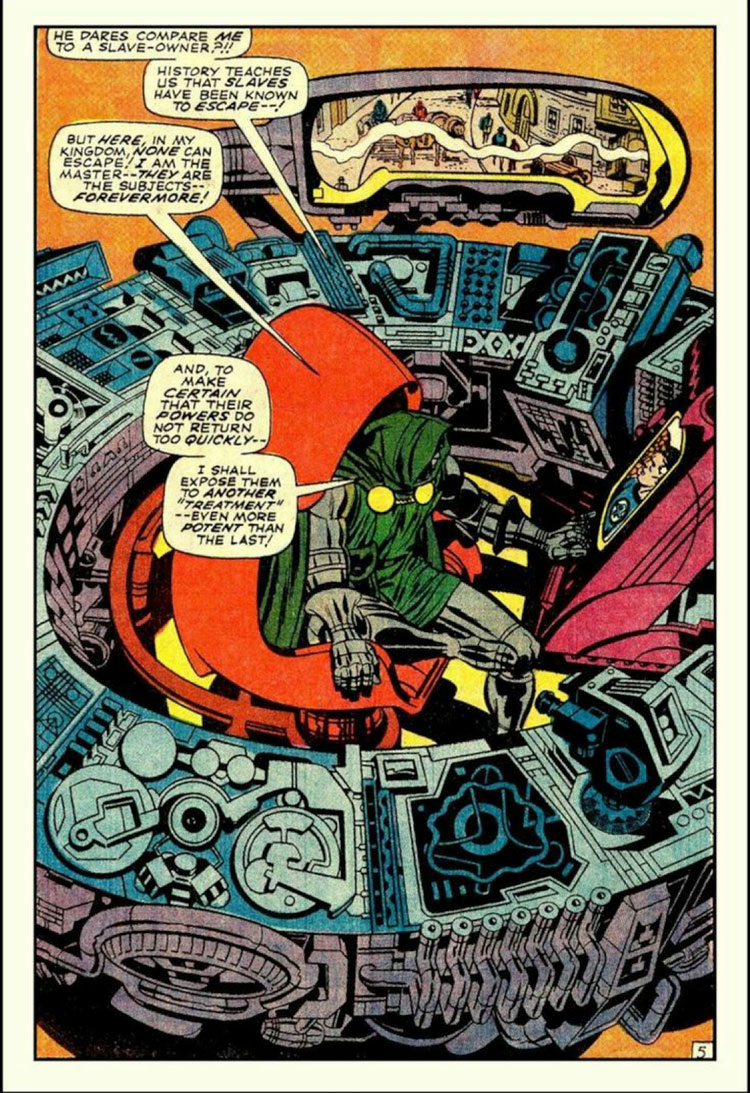 Kirby’s devices are abstract art, much like Odin’s hats of the same period. As Kirby himself said at the San Diego Golden State Comic-Con (as it was then called) in 1970, “…the machinery is non-functional. The machinery is strictly art; it’s a practice in layout. I like to draw a work of art that looks like a machine. And if you accept it as a machine, I’ve done my job.” 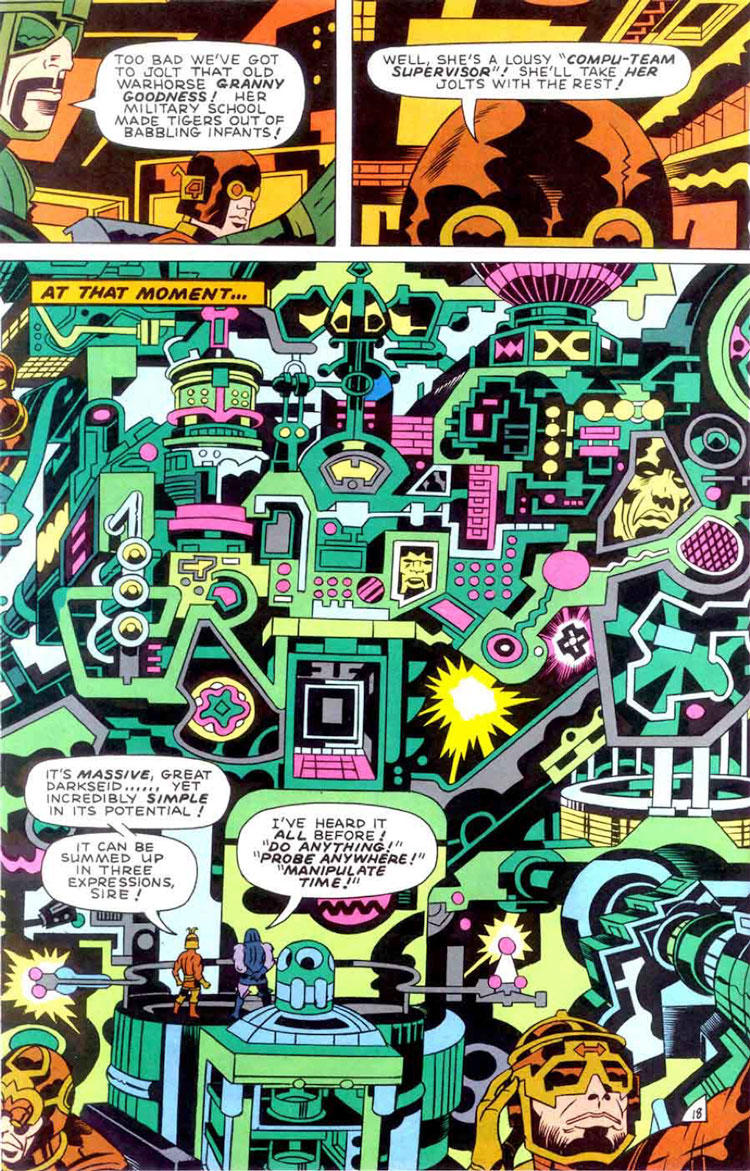 Darrow’s work is even more intricate than Kirby’s and somewhat more reality-based. For example, I’m pretty sure this page from 1990s Hard Boiled is really a photo of President Trump: 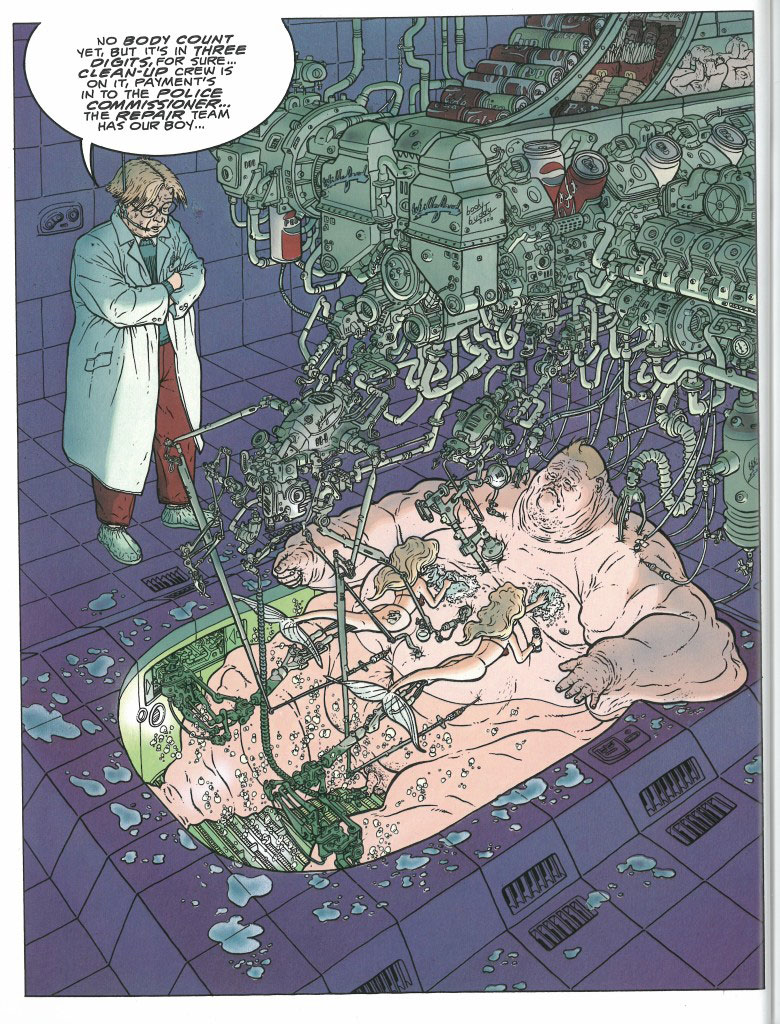 Check out the stuff going into that horrifying machine if you want to be extra grossed out. Darrow, as always, doesn’t skimp on the details.

Hard Boiled was a cyberpunk cornucopia of marvelous machine mayhem, as seen in this Christ-like scene: 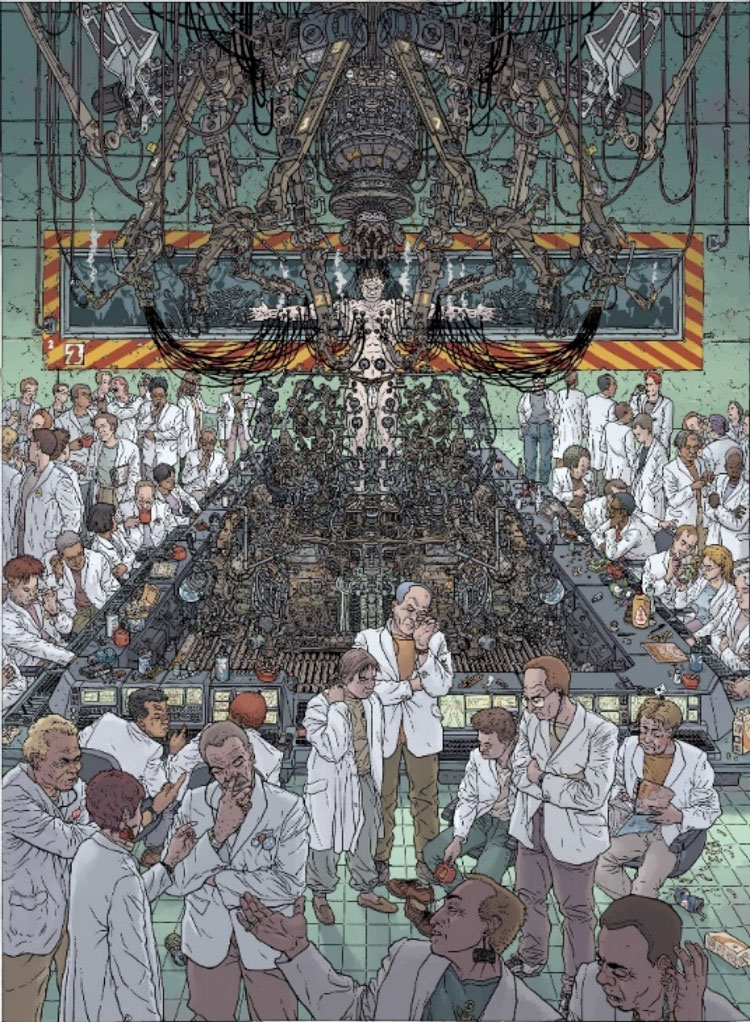 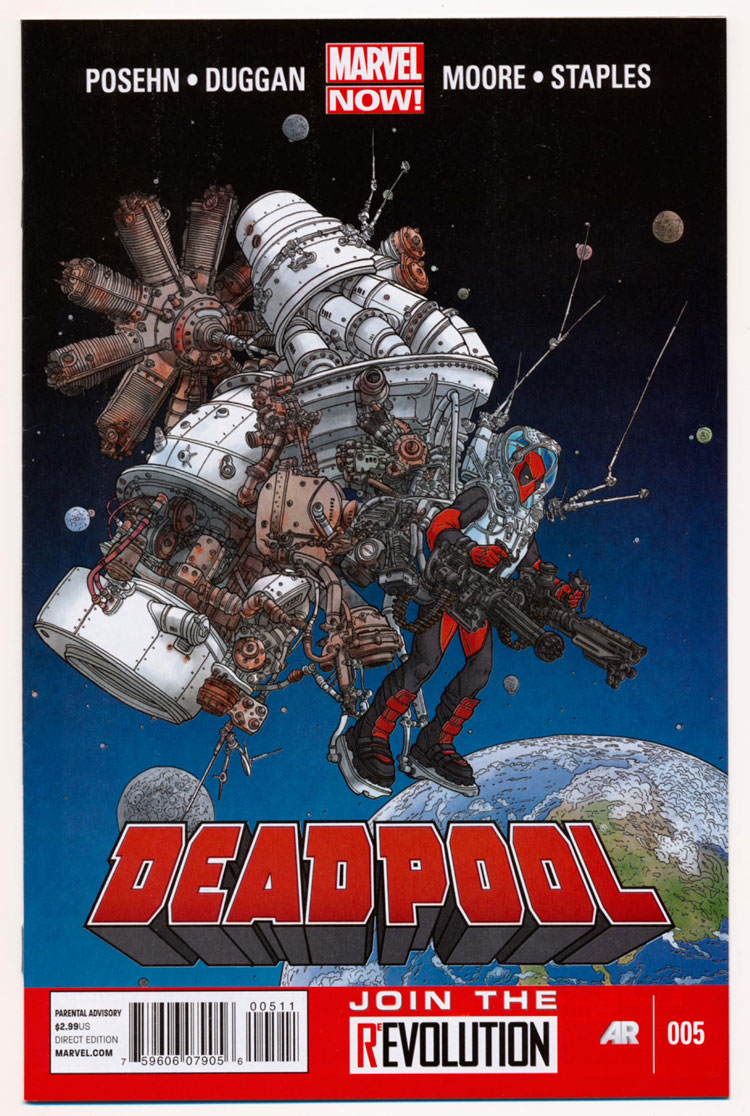 In Lead Poisoning—a book of Darrow’s pencil art that you need—Darrow makes Rube Goldberg seem like a minimalist. Just check out the cover: 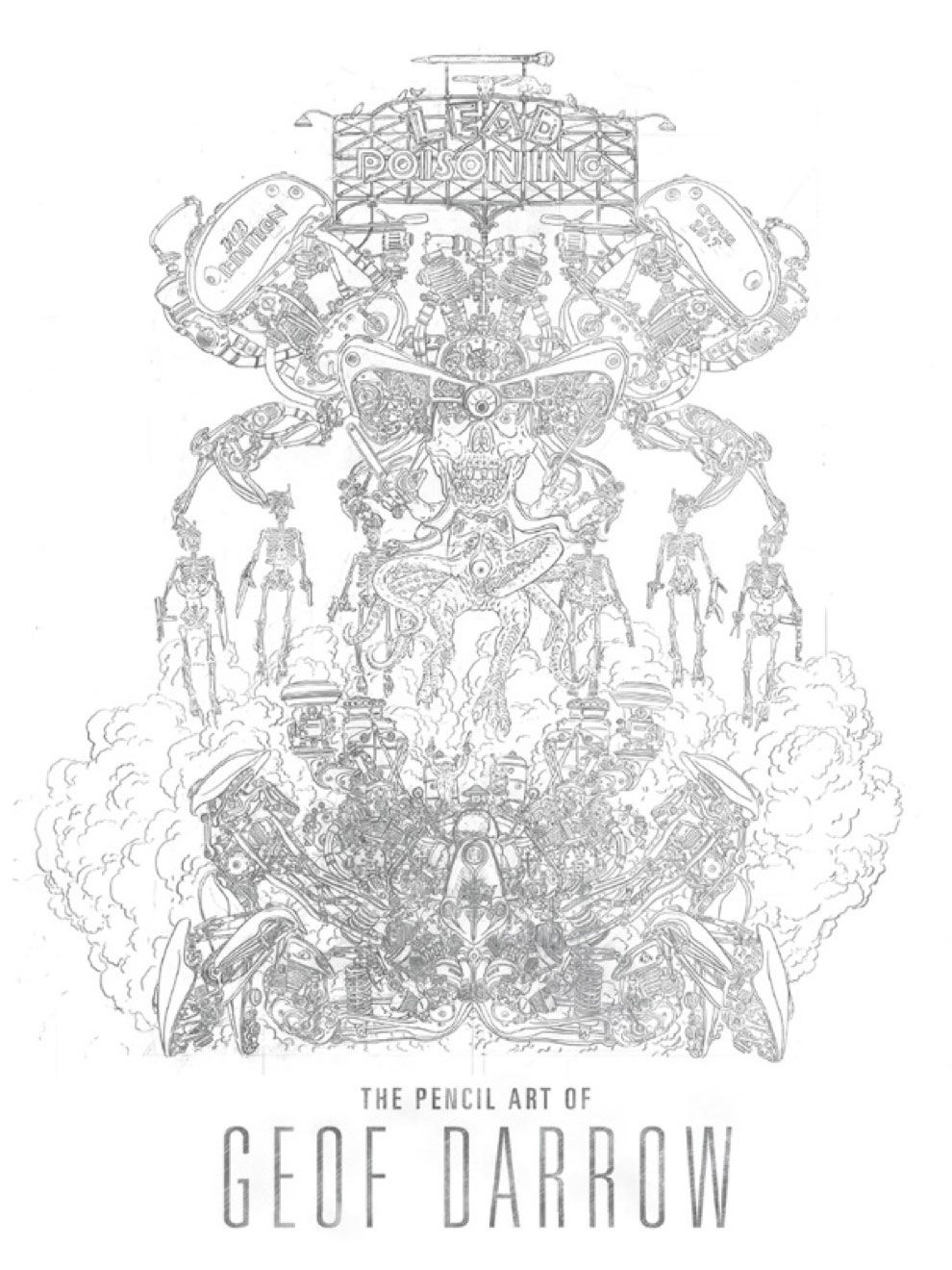 I don’t know what’s going on there, or why skeletons make such great fodder for Darrow doohickeys, but I can’t stop looking at this mind-expanding, body-exploding stuff.

Drawing machines didn’t come easily to Darrow. He told the Chicago Tribune, “I was horrible at drawing mechanical things. When I was in art school, I worked at Quaker Oats (in Iowa) and they had all these gigantic machines. I would look closely at how the gears worked. So I pushed myself to do machines.” Lucky for us.

Speaking of luck, I talked to Darrow myself for The Chicago Reader a few months ago. He didn’t mention thingamajiggers, but did discuss his drive for details, saying, “Everything matters. It matters to me. I draw all that stuff because it adds content, and it makes it very particular. Each one of those drawings, each one of those streets: they’re not generic… I try to make everything its own creation so it doesn’t get boring. It adds character to the drawing.”

Mega-machinists Darrow and Kirby are maestros of the comic page: no other medium can capture their magic. Sure, Thor: Ragnarok brought more of Kirby’s inventive flavor to the screen than any previous movie, but it didn’t plumb the depths of his machinery. Imagine a film that brought the guts of Captain Victory’s ship to life. 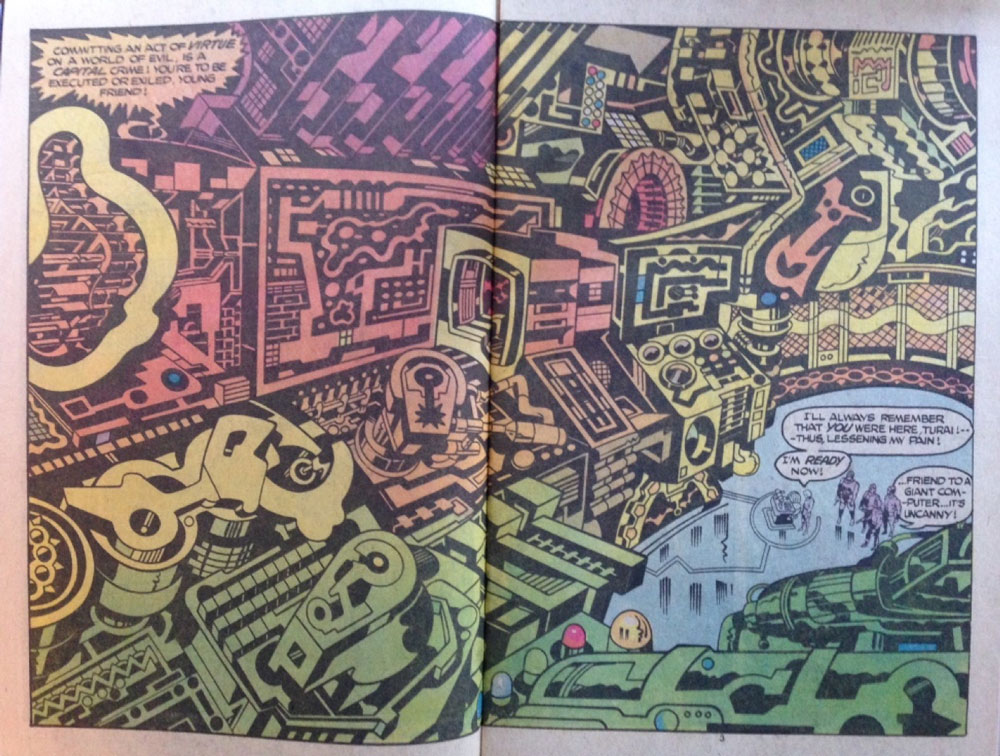 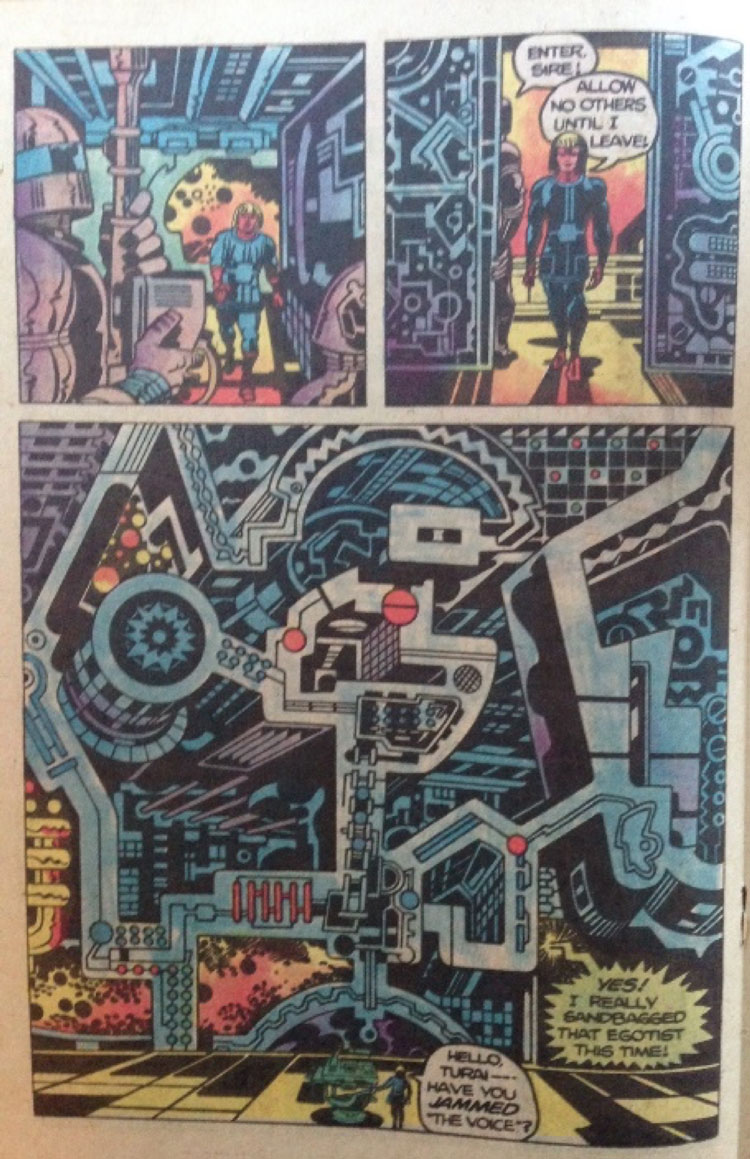 Likewise, there’s no movie that captures Darrow’s true genius, despite his design work for films like The Matrix. Imagine a movie filled with stuff like this: 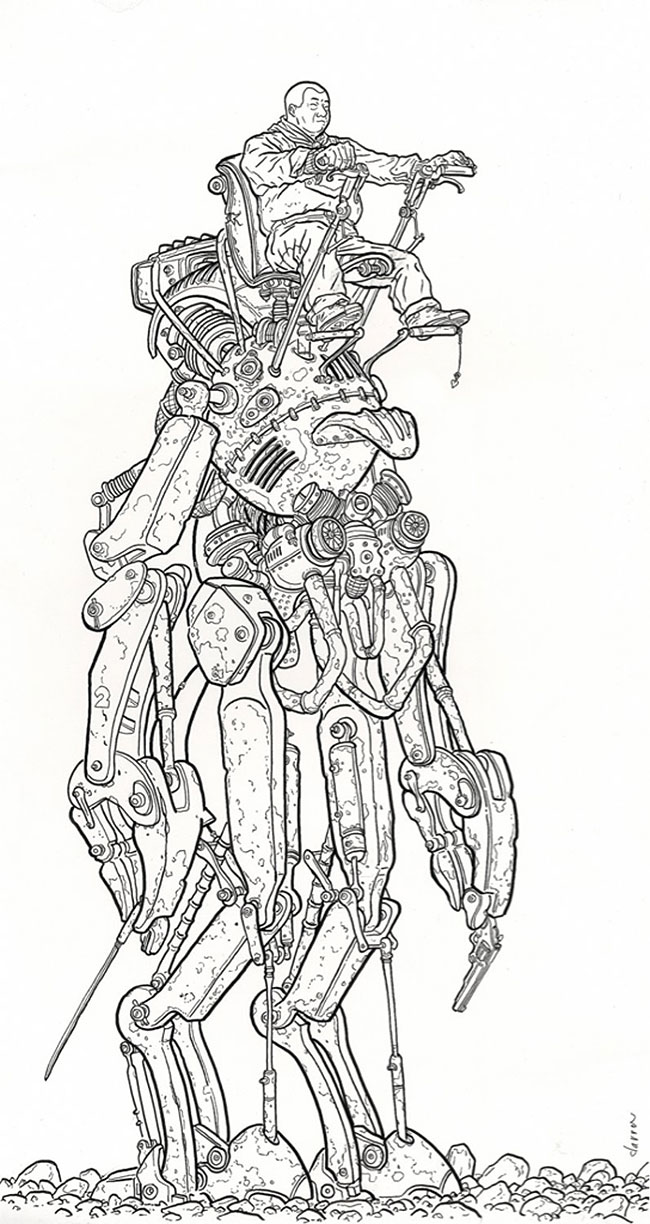 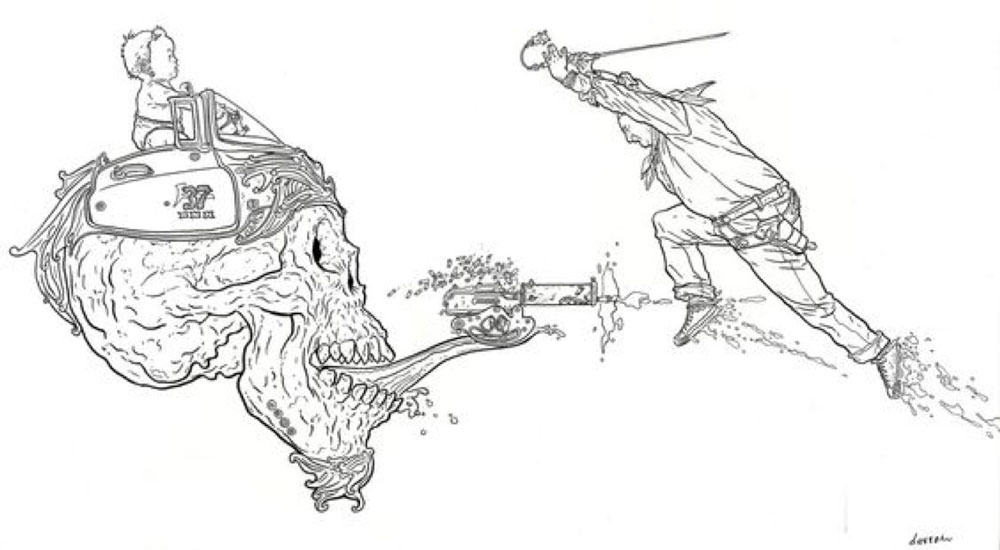 Then again, who needs to imagine a movie when we have these comics?

Thanks to geniuses — a word I use with no exaggeration — like Darrow and Kirby, the comic book is a medium that can beat the visual pants off any film (and most gallery art too).

When I need a break from my podunk life and/or the fresh hell of 2018, a Darrow or Kirby doohickey is all the anti-depressant I need. Their machinery is my medication.