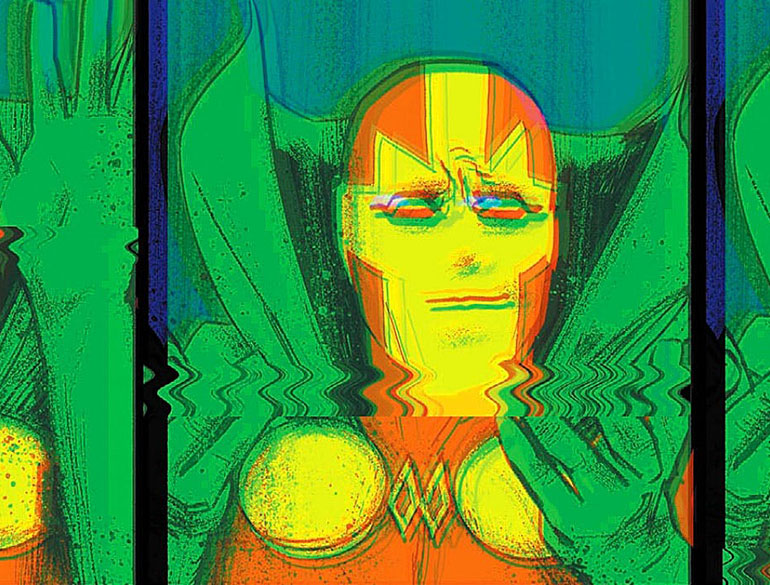 This was a year of many great comics. I adored Moon Knight by Jeff Lemire and Greg Smallwood; Shaolin Cowboy: Who’ll Stop the Reign? by Geof Darrow; COPRA by Michel Fiffe; and The Wild Storm by Warren Ellis and Jon-Davis Hunt.

The Kirbyology committee arrived at these comics by a rigorous process of reading a zillion Kirby comics, reading a gazillion other comics, and seeing which comics produced a similar state of cosmic bliss.

I also had two criteria: a series got Kirby points for doing outstanding work with Kirby concepts or going full-gonzo weird and wild in the Kirby spirit. But without further hoodoo, here are the top ten most Kirbyesque comics of the year. 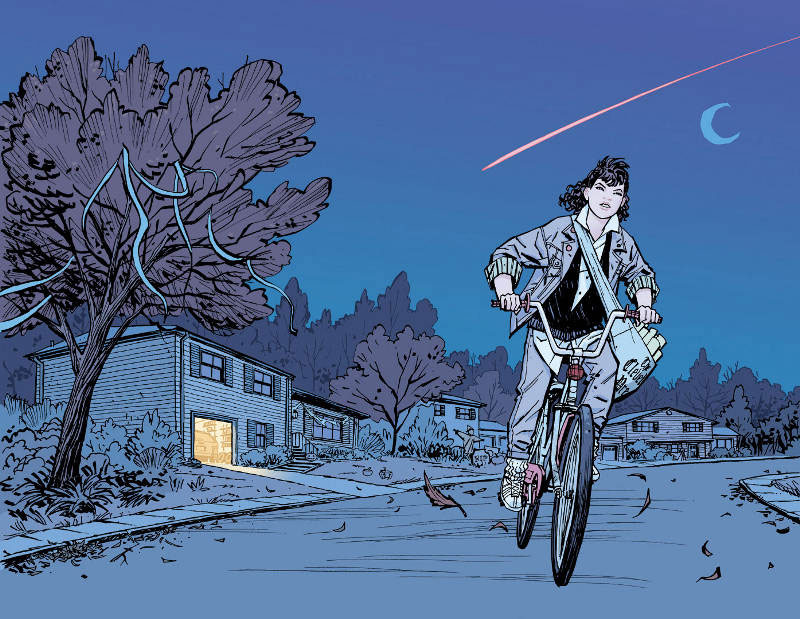 Artist Cliff Chiang has always had a heavy Kirby vibe while being utterly his own creator. Chiang’s distinctive visuals, masterfully capturing the insane and the mundane, earn this addictive series a puff of Kirby’s cigar. Also, nothing’s more Kirbyesque than a kid gang. Oh, and this Brian K. Vaughan fella might know how to write.

9. Bug! The Adventures of Forager 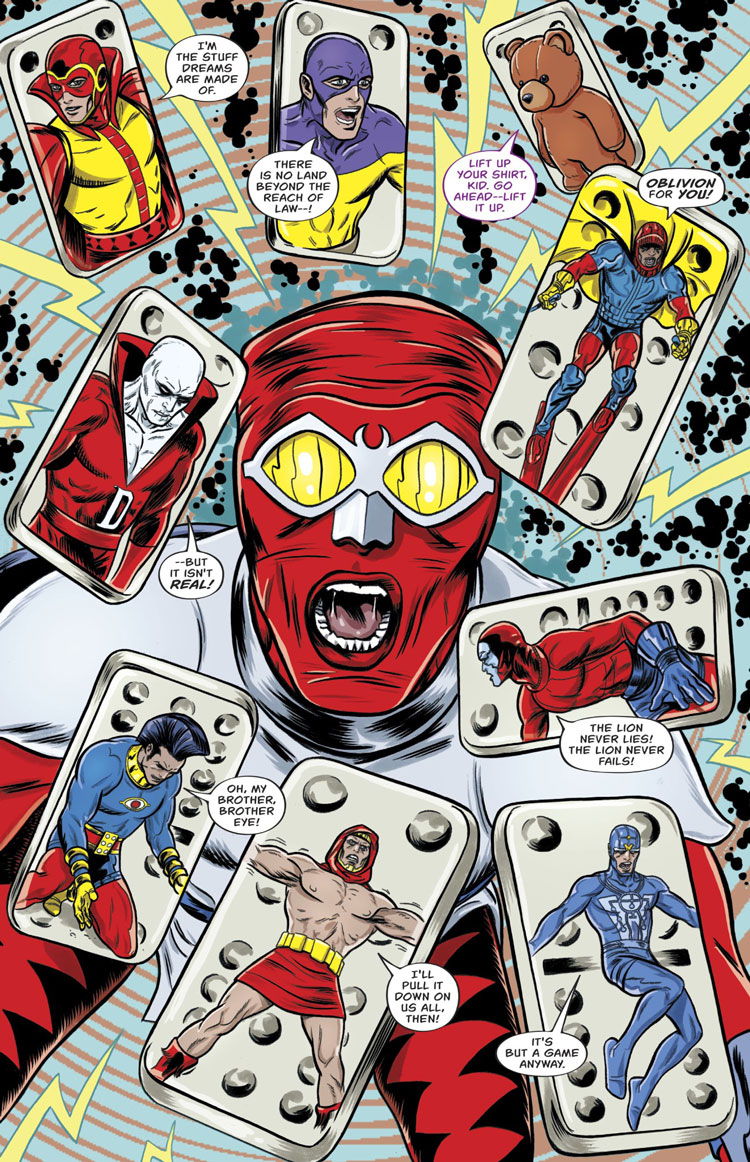 Taking one of the least celebrated of the New Gods, the Allred clan (Lee writing, Mike illustrating, and Laura coloring) created a loony, trippy delight. Issue five did something that will make every Kirby fan stand up and applaud: the Allreds continued the story of the original OMAC, left uncompleted by Kirby in 1975. I was so happy to see water-stealing Dr. Skuba return I spilled my water. This series, from beginning to end, was pure pop pleasure. 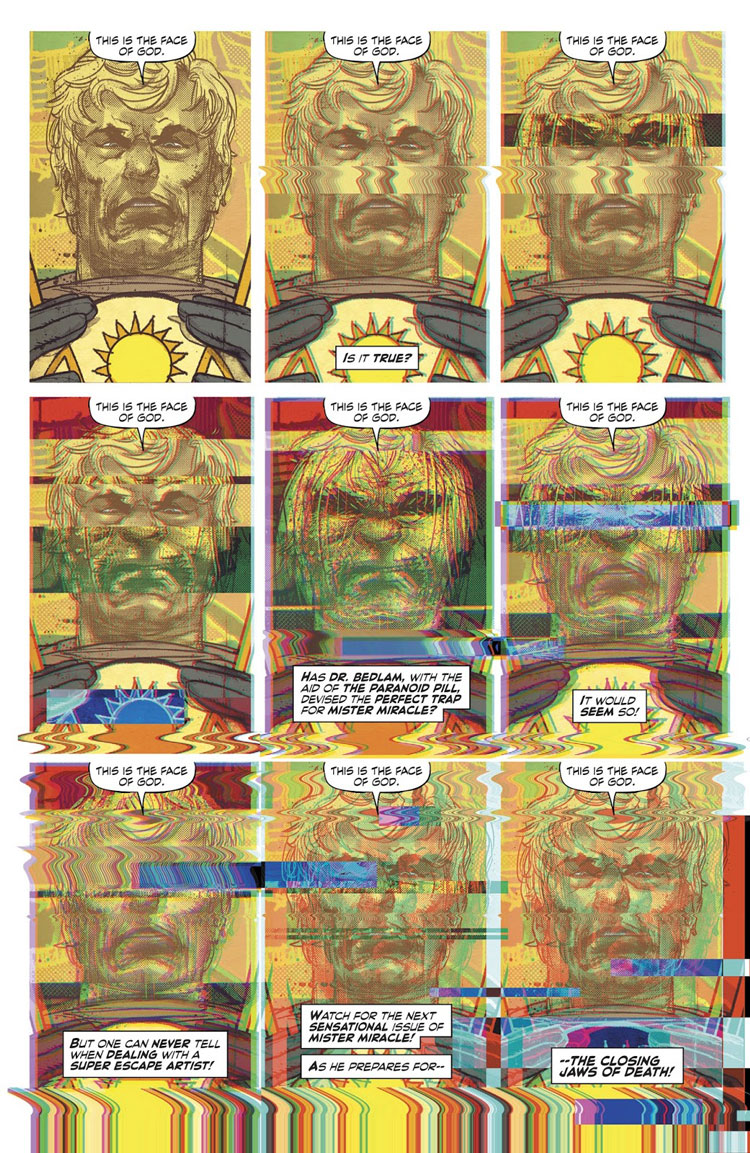 This is one of the most talked-up comics of the year, and I’m not complaining: Tom King is a maestro of the 12-issue series that rips your heart out (Omega Men, The Sheriff of Babylon, The Vision) and this is the best work of Mitch Gerads’ impressive career. These dudes are doing something distinctly different and oh-so-2017 with Kirby’s most impressive pantheon. The most recent issue (#5) might also be the sexiest comic of the year. 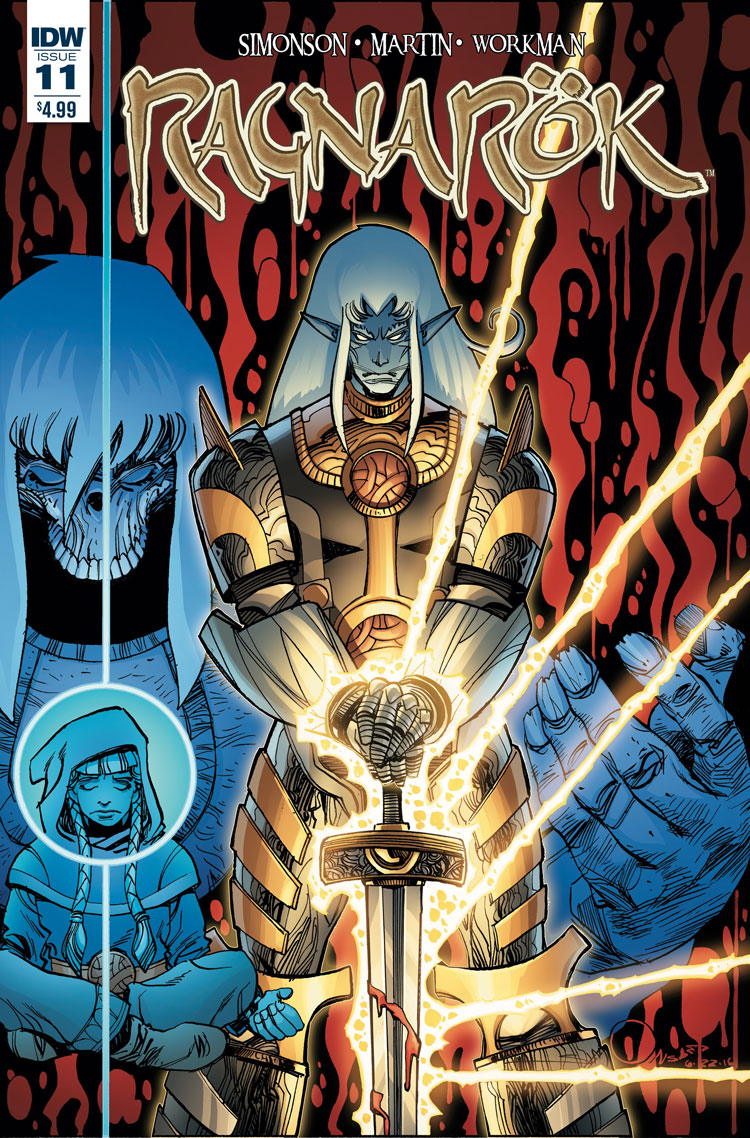 In Walter Simonson’s creator-owned version of the Norse myths, Ragnarök didn’t go as prophesied, so it hasn’t ended. Thor is alive (and somewhat zombified) but everyone he loves is dead (except the perky squirrel Ratatosk). This is a glorious myth, told by Simonson’s always mind-blowing art, that provides much-needed inspiration for all the little and large Ragnaröks we face every day. 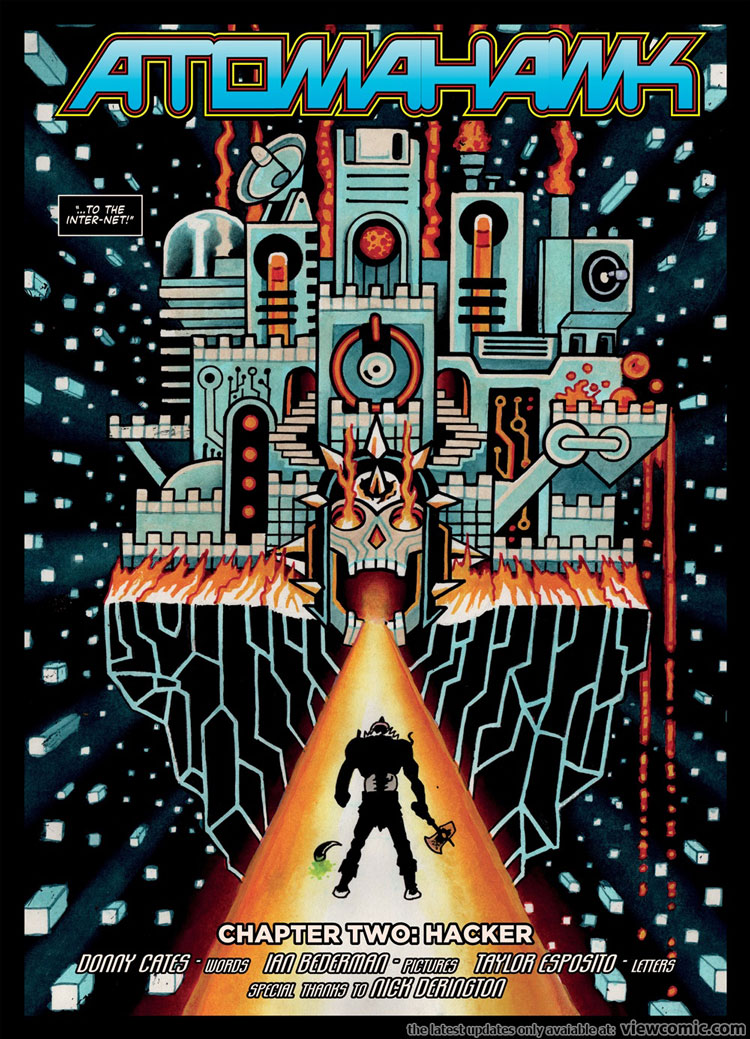 Published in installments in Heavy Metal and Image + and also in a one-shot, this is a comic that has an unusually fleshy origin. Tattoo artist Ian Bederman first drew some of these images on the human canvas before expanding this bananas story into a comic with writer Donny Cates. Grant Morrison called Atomahawk, “A screaming black hole feedback squall of death metal Kirby-kozmik energy spinning straight towards your prefrontal cortex.” I concur. 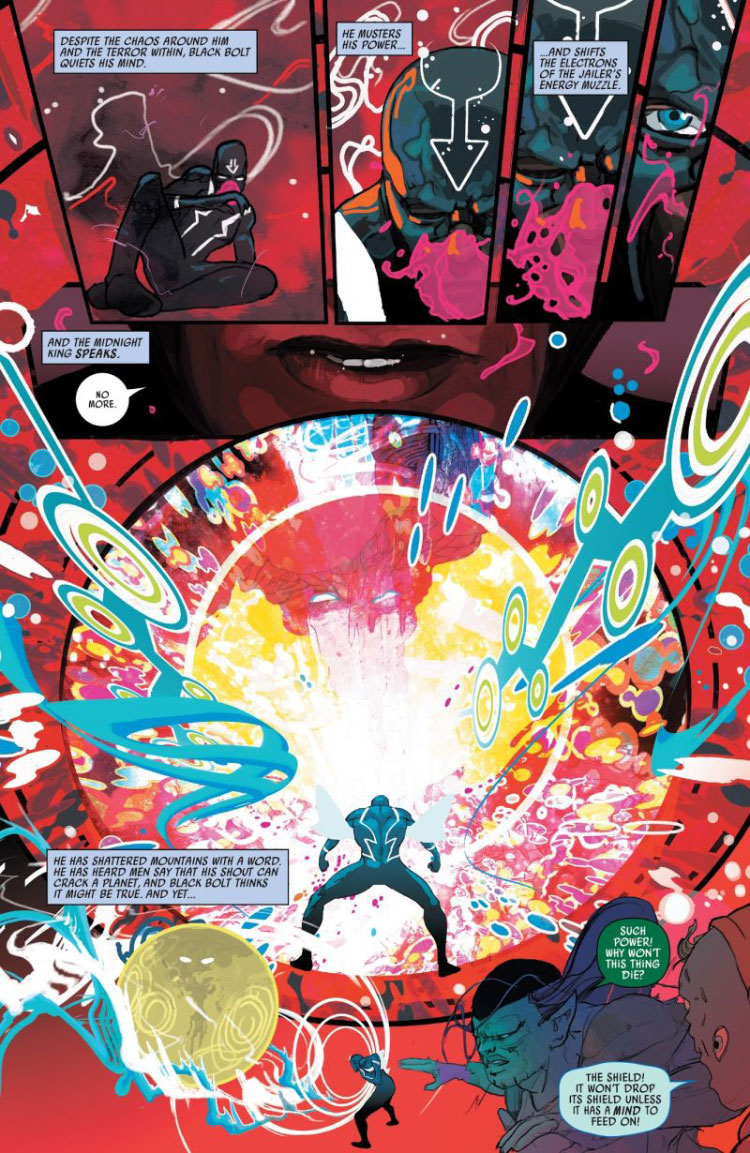 Black Bolt is one of Kirby’s best designed characters, but he hasn’t been the focus of many comics, good or bad, possibly because writers didn’t know how to handle a character who never talks. But novelist Saladin Ahmed and artist Christian Ward have taken the former king of the Inhumans and given him one of the best arcs in recent history at Marvel, comparable only to Lemire and Smallwood’s Moon Knight or the number one comic on this list. Black Bolt is sweet, gorgeous, cosmic stuff. Bonus: guest artist Frazier Irving is a goddamn genius. 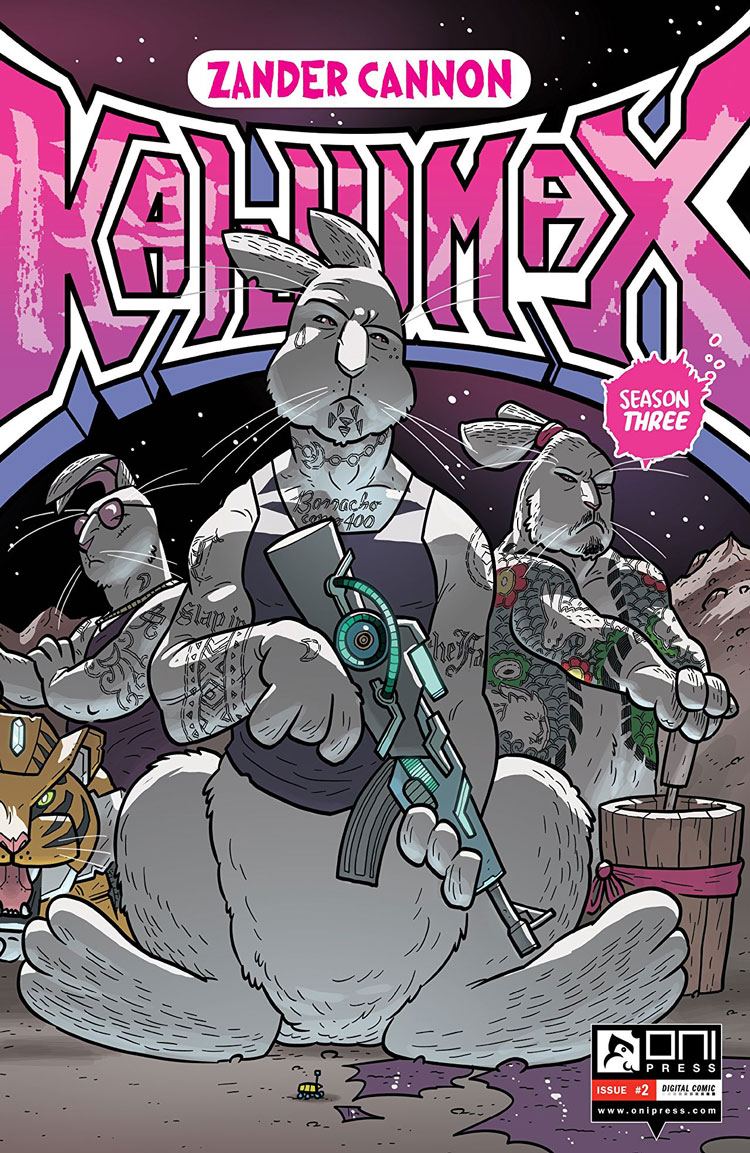 I talked to Zander Cannon for a Salon article about Kaijumax, and the main inspiration for this monsters-in-prison tragicomedy was monster-fighting Ultraman, not Kirby’s monster comics. Still, alongside the horror and absurdity, I can’t help seeing versions of Spragg, Goom, Orrgo, Pildoor, and other Kirby beasties in Kaijumax. The massive monsters and gargantuan originality are worth a mother box of Kirby cigars. 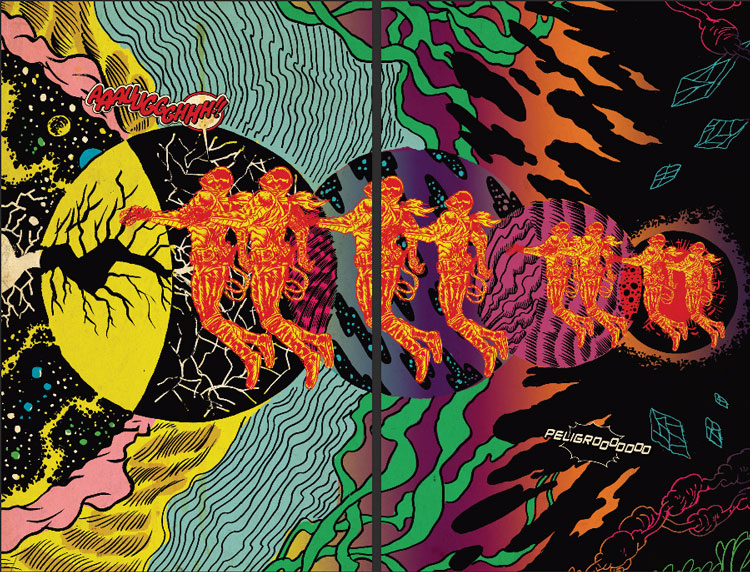 Artist Alexis Ziritt and writer Fabian Rangel Jr. have cooked up the most insane sci-fi adventure since Kirby was birthing his various techno-whackadoo pantheons in the seventies. Giant space whales, skull-shaped spaceships, monkey first mates, and evil space vikings make this a must-read if you like your comics fun and your mind blown. 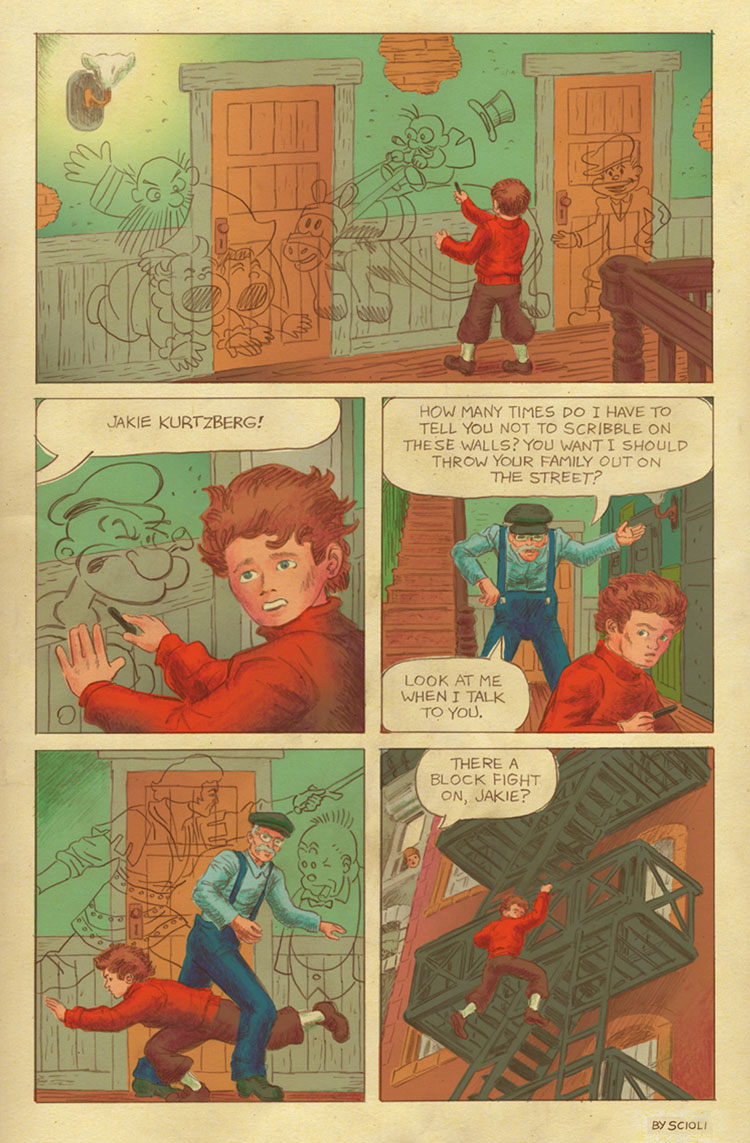 Though Tom Scioli told me Kirby is his least Kirbyesque project in terms of art, it’s obviously his most Kirbyesqye in terms of subject matter. This ongoing Kirby biography is a must-read, whether you’re a lifelong Kirby fanatic or just discovering his life and art. Don’t wait for the inevitable print edition: follow along now, for the love of Darkseid. 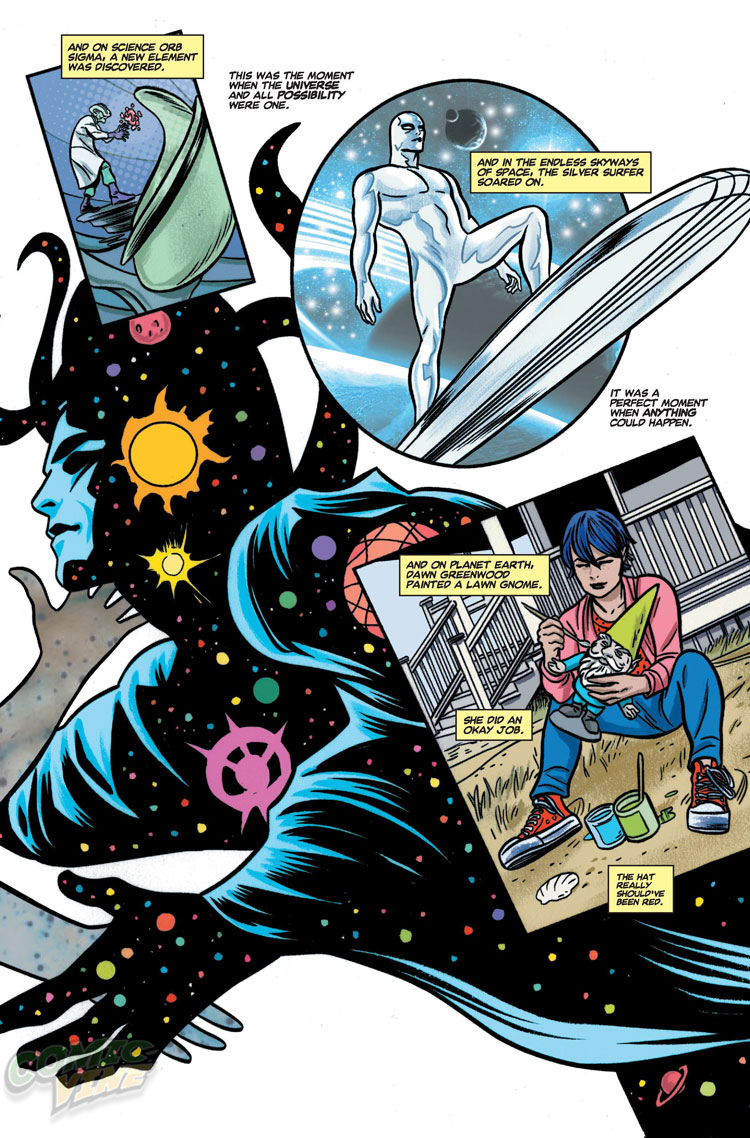 It’s sad to see Dan Slott and Mike Allred’s Silver Surfer run end this year, but it’ll always be there to reread, and I’m going to reread it plenty.

To say this series “stuck the landing” would be the understatement of the space-time continuum. From 2014 to 2017, Slott and Allred did Kirby proud in more ways than anyone else:

1. They produced the best ever run of Silver Surfer, a character whose origin was 100% Kirby. 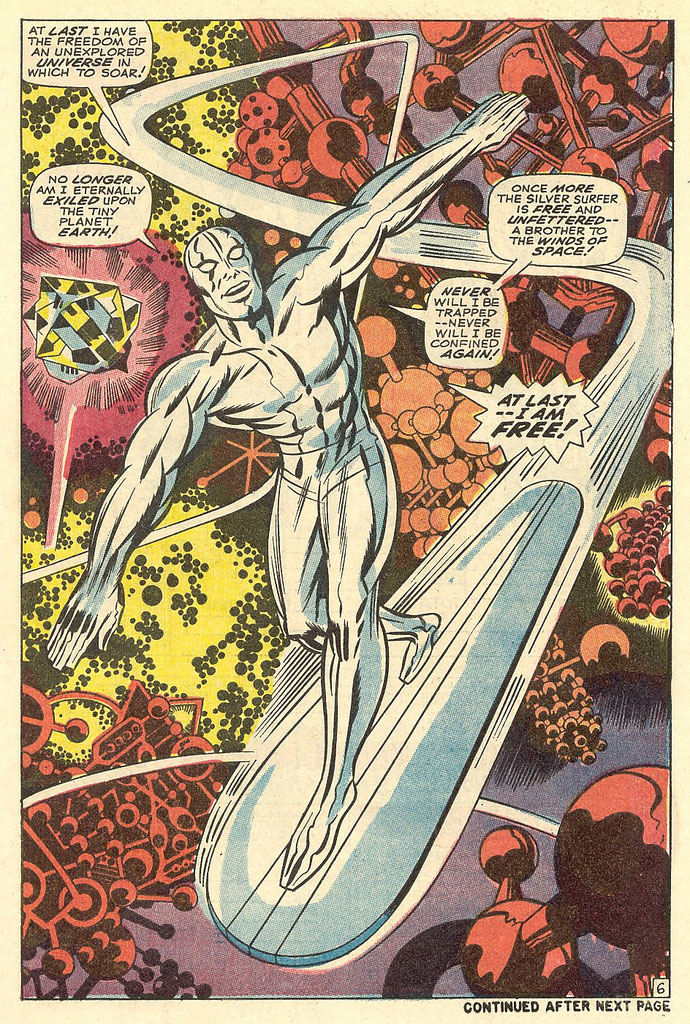 2. They honored the past of the character but continually innovated new worlds and concepts, such as the Impericon.

3. They wrote an incredible romance comic, a genre created by Kirby and Joe Simon. 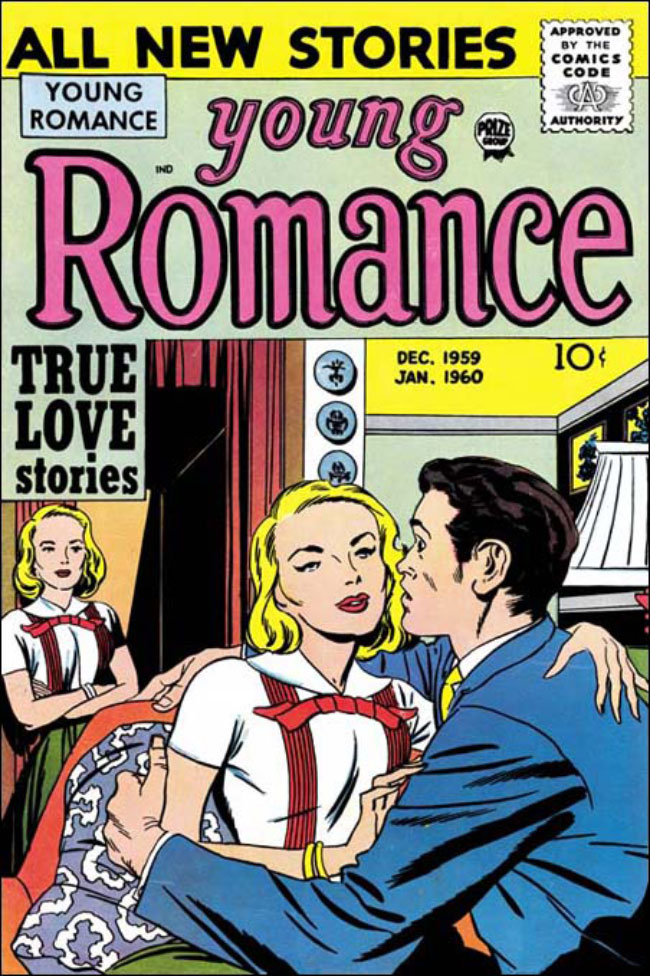 4. They tied this romance to the most famous aspect of Kirby’s art: Kirby Krackle.

Spoiler alert: the dots on Dawn Greenwood’s trademark clothes ended up inspiring a time-traveling Silver Surfer to retroactively make these dots the manifestation of his power cosmic, thus infusing all Kirby Krackle with the spirit of Dawn and Norrin’s romance. 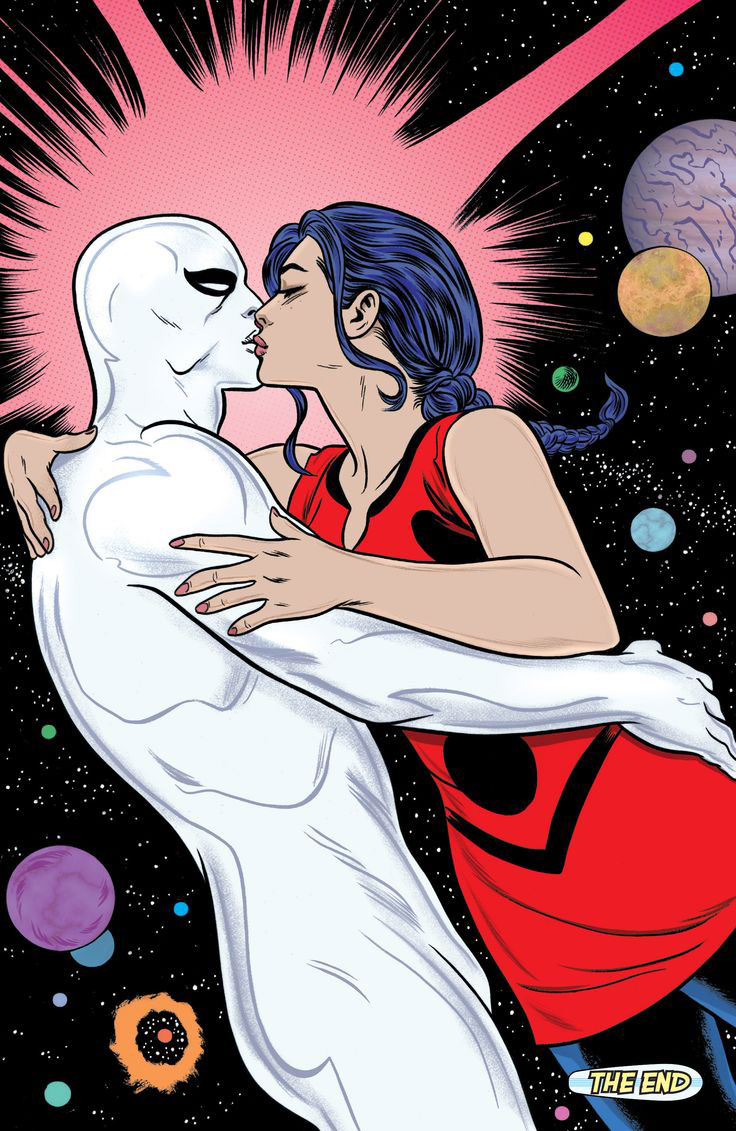 Corporate comics can be a lame, soulless nightmare, or they can be like Silver Surfer: a timeless, mythological, life-affirming joy. This was immortal stuff. And the most Kirbyesque comic of the year.