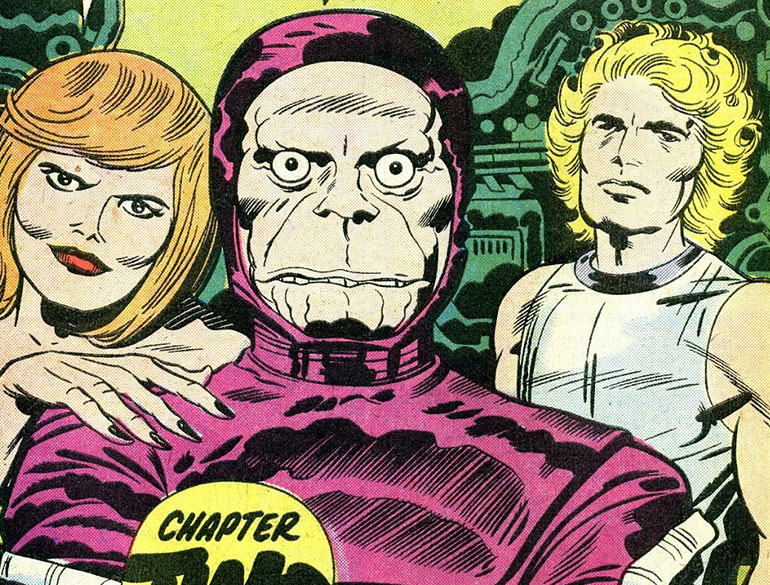 Jack Kirby is my religion, and like all religions, Unorthodox Kirbyism can be a strange duck. And I’m not talking about Destroyer Duck, created by Kirby and Steve Gerber. 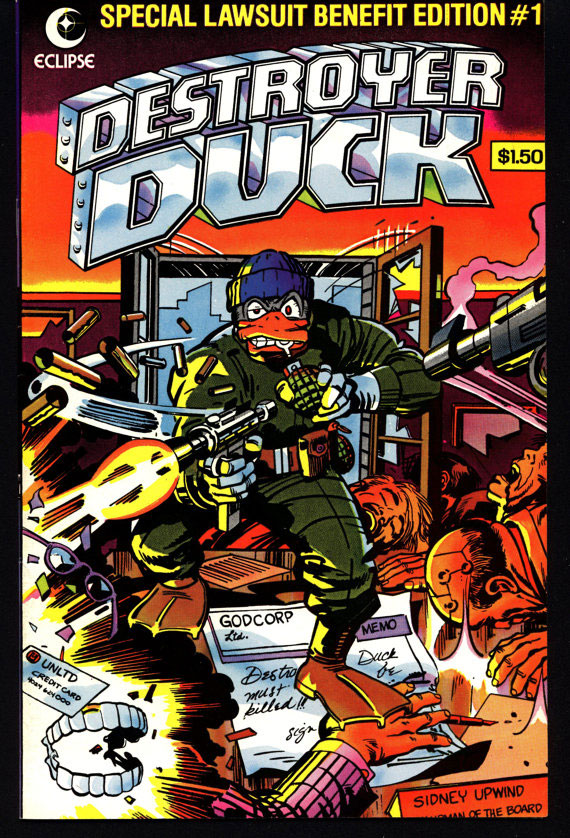 For some, names like Scott Free and Baron Von Evilstein are evidence of how much Kirby, when he fled Marvel for DC in 1970, missed the (slightly) subtler hand of Stan Lee. But Kirby’s names, like his writing overall, isn’t as easy to pigeonhole as some pigeons would have it.

Kirby’s names for characters, gizmos, places, and vehicles may be uber-transparent — and in one heady case, triply redundant — but they’re also natural side effects of Kirby’s bottomless sincerity and weapons-grade need to communicate. He was all about telling stories, and his character names were flashing neon tools in telling those stories. Even if they’re a tad ridiculous.

All Kirby’s 1970’s comics contain memorably insane names for characters and things, but his most cockamamie collection of hellacious handles can be found in Mister Miracle and the Fourth World as a whole. The Fourth World (told via The Forever People, Mister Miracle, The New Gods, and Superman’s Pal Jimmy Olsen) is peak Kirby in all ways, including names that are half genius, half madness, and half cosmic power beyond the limits of earthly math.

The most famous Fourth World names — escape artist Scott Free, evil tyrant Darkseid, worst orphanage owner ever Granny Goodness, Stan Lee spoof Funky Flashman, and torturer Desaad — are as on the nose as a witch’s wart. But these names are merely the tip of the bonkers-berg.

There are at least two evil doctors with restaurant-quality names: Doctor Bedlam and Doctor Virman Vundabar. There are gizmos such as Astro-Harnesses, Aero-Discs, Mega-Rods, Electro-Axes, X-Pits, Electro-Lances, Inferno-Bolts, Dyna-Blasts, Mobius Chairs, Wonder Staffs, and Boom Tubes. The names New Genesis and Apokolips are not paragons of subtlety. A massive lump of a monster is called the Lump. A non-Mensa character is named Kreetin.

Along these lines, the Female Furies of Apokolips — led by Big Barda — are as fearsome as their names are preposterous and awesome. 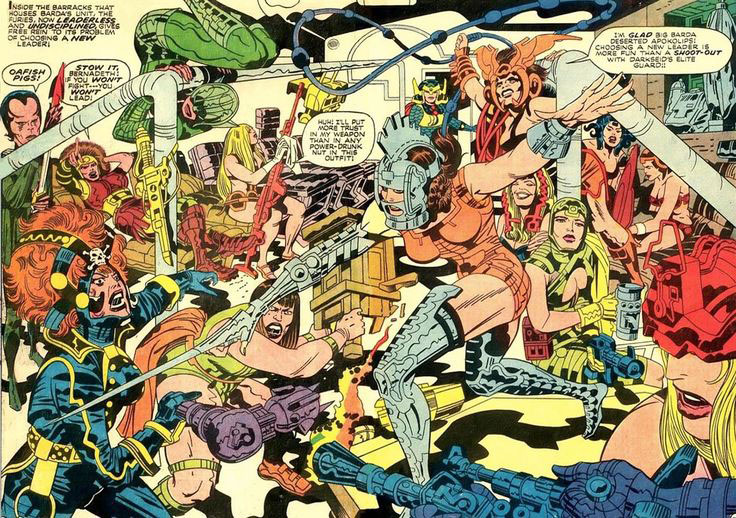 Stompa is a lady who, one would assume, though a gentlemen never should, likes to stomp. Lashina is presumably better with a whip than Indiana Jones. Gilotina has, my god, the most amazing name ever. Well, other than Bernadeth, sister of Desaad. How is Bernadath not also the name of a female heavy metal singer or band?

Kirby trivia alert: While rereading Mister Miracle, I noticed that Bernadeth is originally spelled Burnadeth, which is even more glorious. If I had two daughters, I’d name them Bernadeth and Burnadeth.

Elsewhere in the Kirby 1970’s oeuvre, OMAC — maybe the most underrated Kirby — included some memorable names alongside a visionary portrait of THE WORLD THAT’S COMING. There’s poor alliterative Buddy Blank, a fella so depressed he doesn’t even want to burn cars in the accurately named Destruct Room of Psychology Section, which is next to the Silent Room and Crying Room. 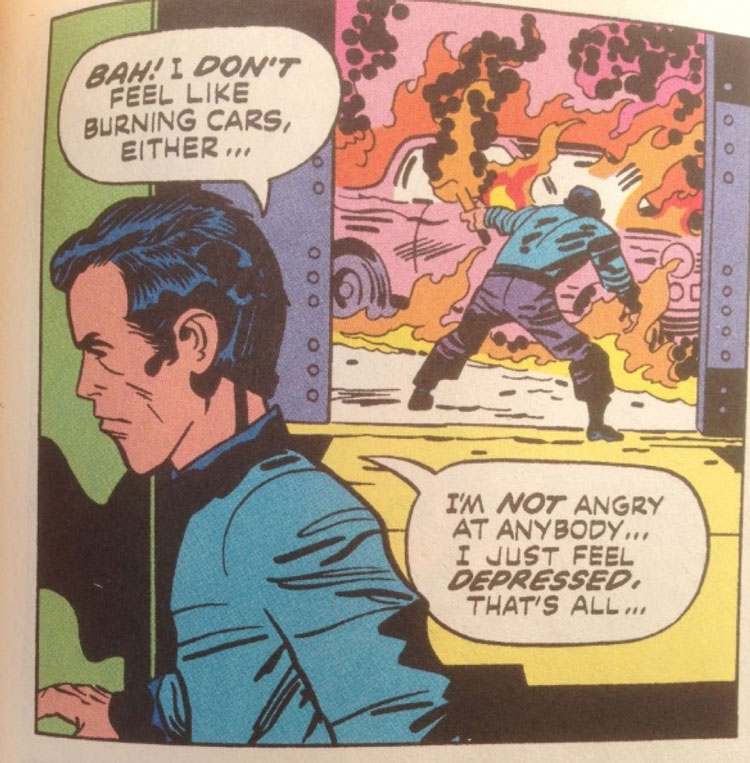 If you’re too depressed to burn cars, consult a doctor.

The villains have some memorable names, like Mister Big, Major Domo, the Godmother, Tough Tully Morgan, Fancy Freddy Sparga, and — the pinnacle — Dr. Sandor Skuba. Dr. Skuba’s mission matches his name: stealing all the water in the world, alongside his henchchildren Seaweed and Apollo. 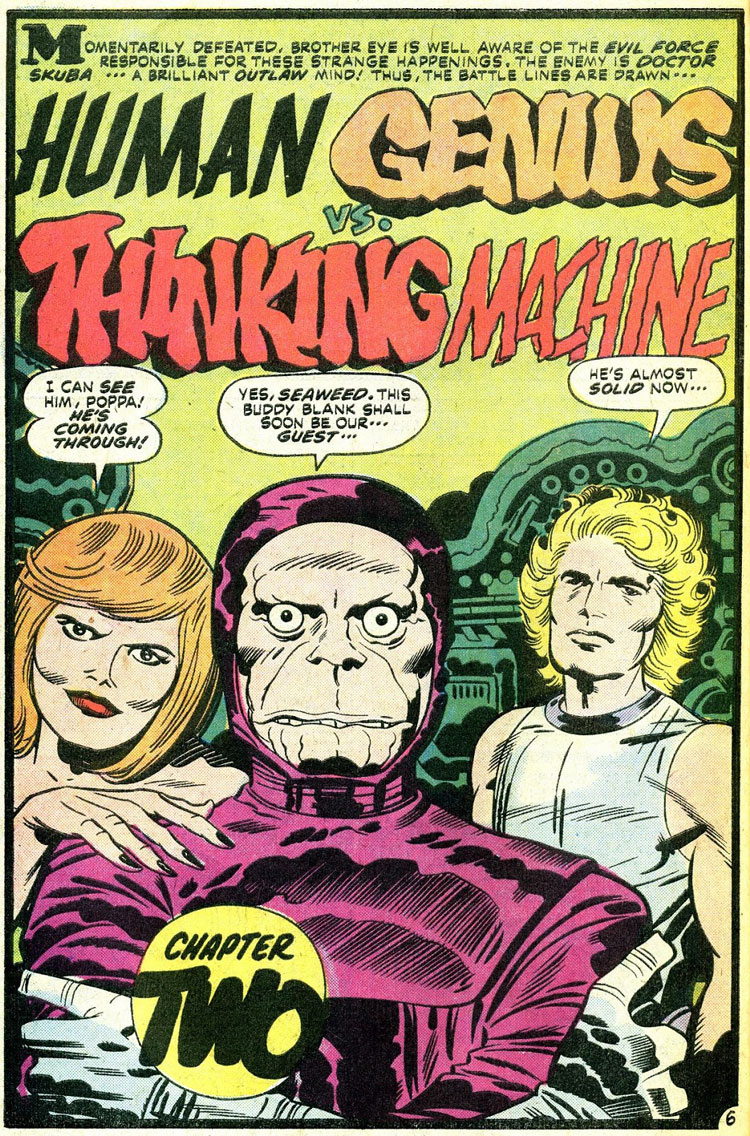 Speaking of water, this map from Kamandi gave Kirby many naming opportunities: 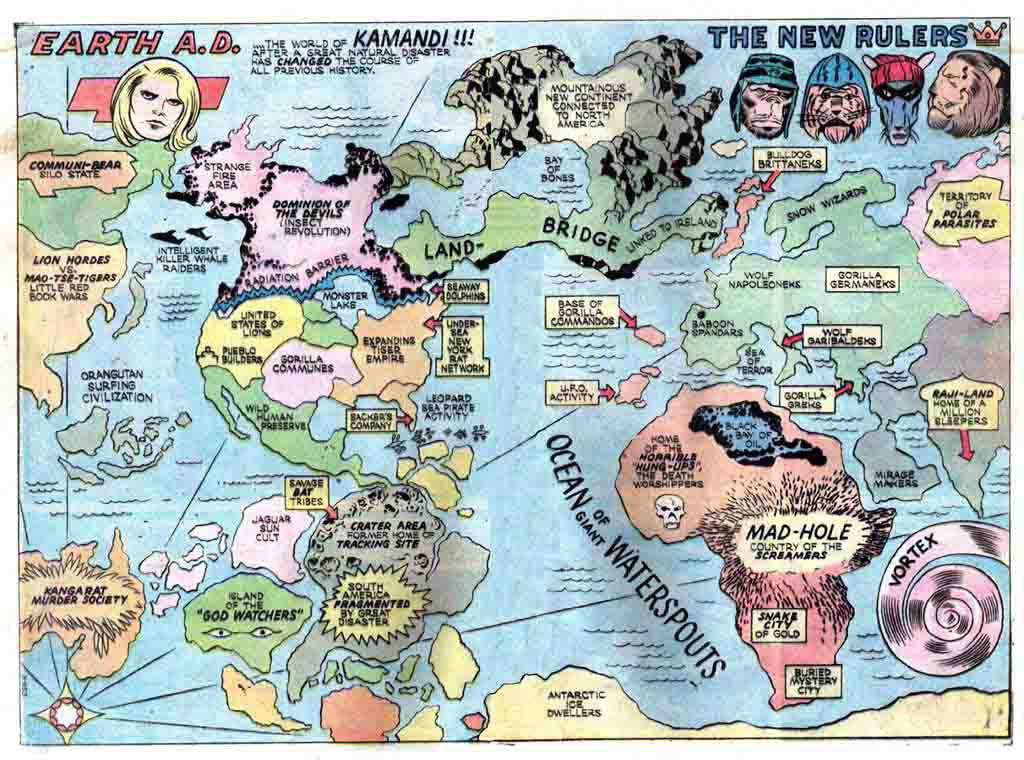 There’s a lot to unpack here — Mad-Hole Country of the Screamers? Dominion of the Devils? — but the one I can’t get over is the name of poor Australia: Kangarat Murder Society. Crikey, that’s harsh.

Jimmy Olsen — possibly the wackiest and most improbable of Kirby’s wacky and improbable 70s output — featured some tremendous names. There’s the Whiz Wagon, which the Newsboy Legion built and ride. There are DNAliens, Micro-Paratroopers, Hairies, and Servitors, plus weapons like the Paralyzer Rod (which I assume is less versatile than Big Barda’s Mega-Rod) and cosmic highways like the Zoomway (possibly a relative of the Boom Tube).

Then there’s the name of an enormous vehicle/behemoth: the Mountain of Judgment. 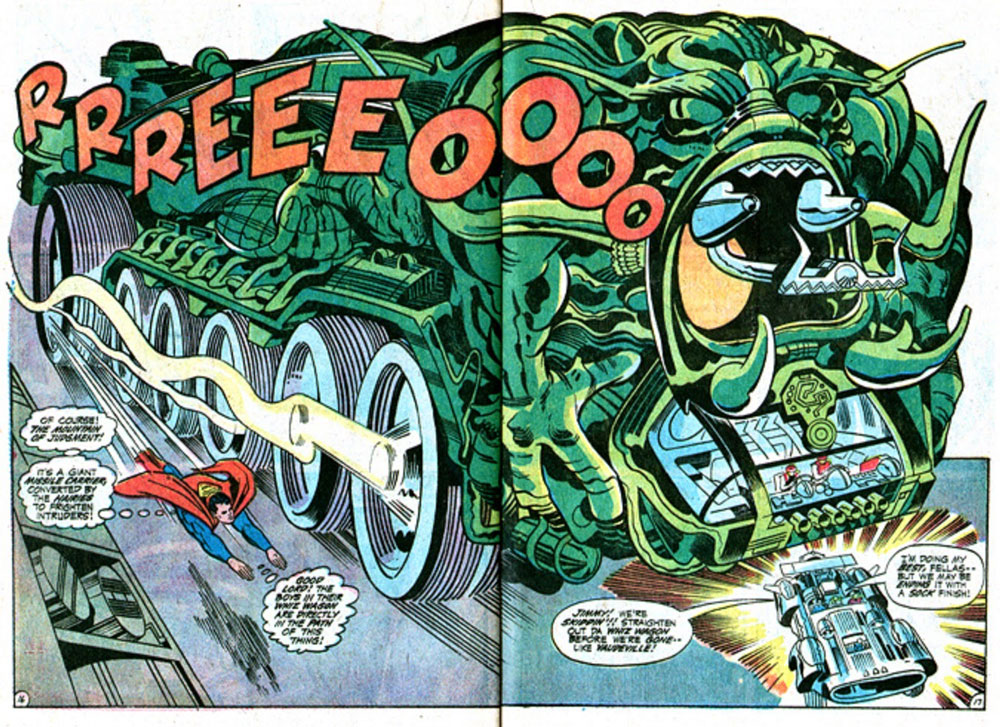 I wish this were how the actual justice system worked.

I haven’t even gotten to The Demon or any of Kirby’s 70s Marvel stuff, not to mention his 80s work like Captain Victory, which boasted names such as Lightning Lady, Insectons, and Siliconian Non-Breathers. But I can’t contain myself any more: grab your Mother Box and get ready for the best/worst Kirby name ever.

In Mister Miracle #10, Scott Free fights the ominously named World Protective League. That name is actually quite subtle and euphemistic—unlike the group’s Orbital Plague Bomb, which I hope is prohibited by the Geneva Conventions.

The head of the World Protective League is just a head. He gives orders from a flying glass cube. 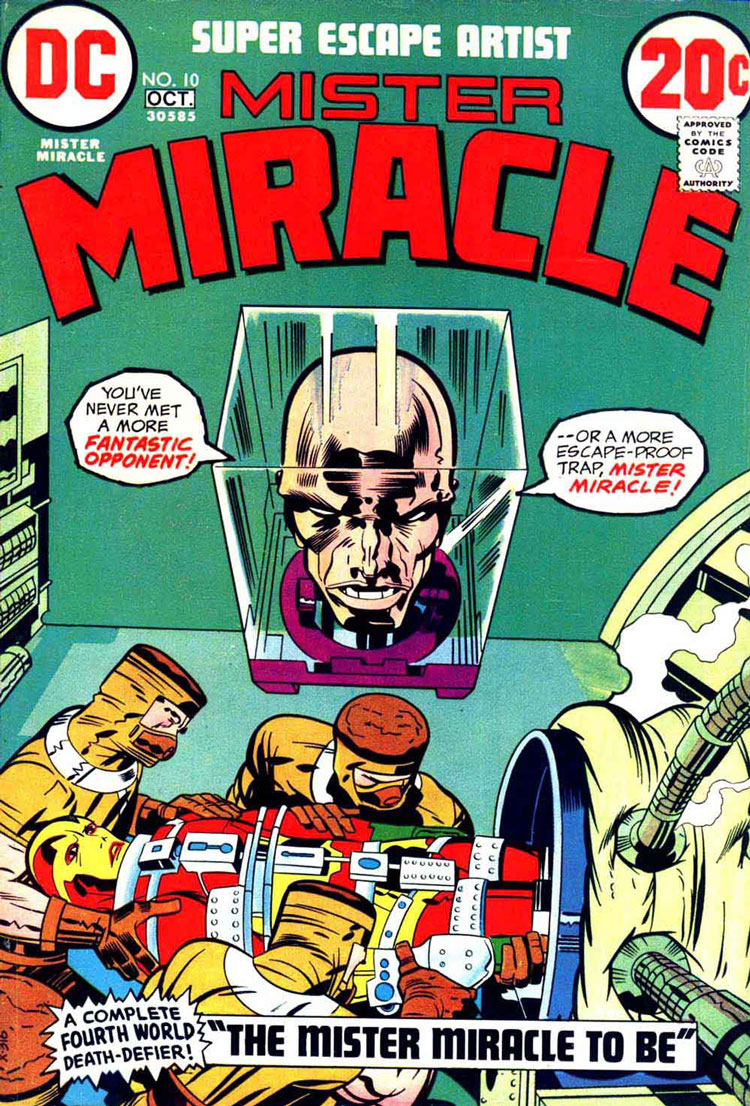 And his name? Head.

To sum up: this baddie’s name, job title, and physical status are all head.

Is this mad genius, utter stupidity, beat poetry, or cosmic convergence of the type only Arishem of the Celestials can judge? Man, I dunno. But I know I love it.

Kirby himself seemed to marvel at his own names at one point. In the intro to Jimmy Olsen #137, Kirby set the scene with an enthusiasm that rivals that of his collaborator and arch-nemesis Stan Lee: “WILD AREA! ZOOMWAY! HABITAT! OUTSIDERS! STRANGE NAMES IN A STRANGE WORLD WHICH WAS EVOLVED IN A GREAT NATURAL CAVERN BENEATH MODERN AMERICA!”

That’s not a bad description of Kirby’s work as whole. You can never have enough great natural caverns beneath modern America — or heads.