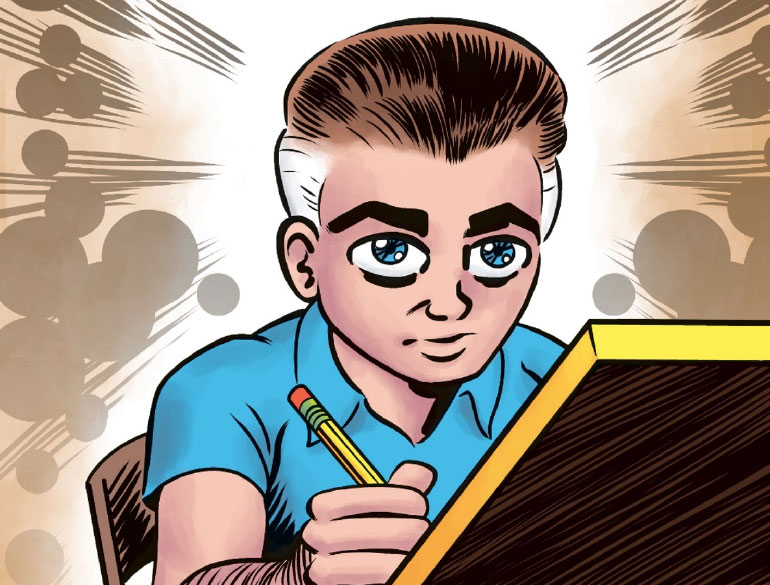 From the 1930s to 1990s, Jack Kirby created gob-smacking art and unforgettable characters, but he was mainly a storyteller. “The Pact,” “Madbomb,” the Galactus trilogy, Captain America’s origin, Silver Star, OMAC, and even Thundarr the Barbarian are among the thousands of tales he spun solo or with collaborators.

But the greatest Kirby story is the one about a poor kid born to Jewish-Austrian immigrants on NYC’s Lower East side who became a World War II veteran, a husband, a father, and the generator of nearly half of today’s popular culture, which he didn’t receive proper credit for in his lifetime. 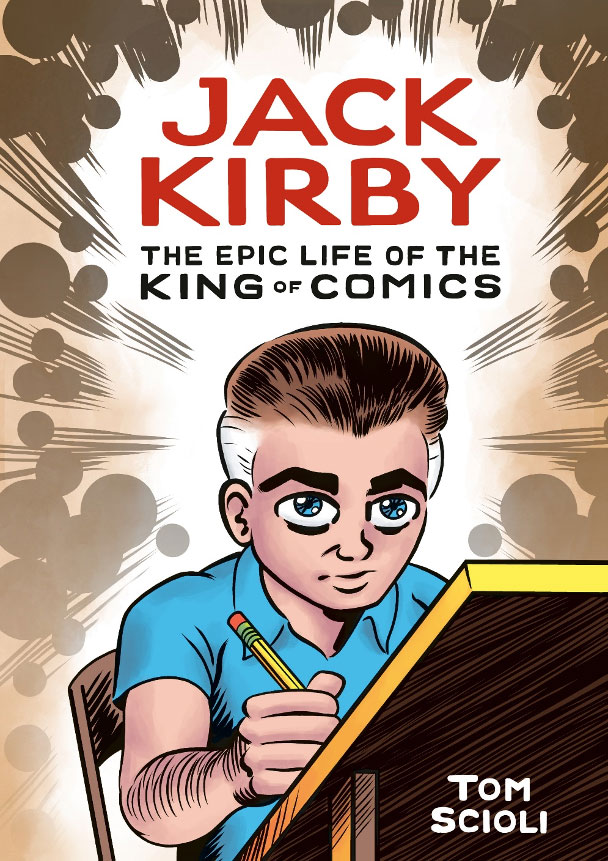 Not enough people know that story, but there’s good news: Tom Scioli — creator of American Barbarian and Transformers vs. G.I. Joe — has been Kirbyesque since he arrived in comics, and he’s performed his greatest service yet to the Kirby legacy in Jack Kirby: The Epic Life of the King of Comics. This is essential reading for anyone interested in Kirby, comics history, pop culture, the twentieth century, World War II, the origins of Marvel Cinematic Universe, and the proper American response to Nazis. 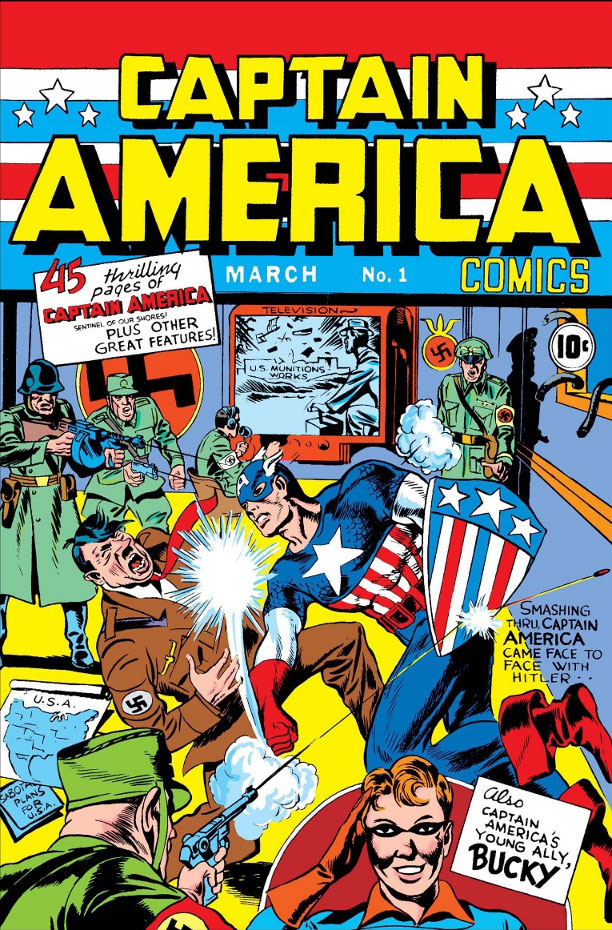 This isn’t an authorized bio, though I think it could have been, as the level of research is extensive (and documented by Scioli in a Notes section). As Scioli told The Comics Journal,

“I didn’t interview Jack Kirby’s children. I didn’t interview Stan Lee, or anything like that. It’s just based on stuff that’s out there: fanzines, interviews, various books on the subjects of comics, in general, or Marvel comics, or Kirby, specifically. And, of course, the Jack Kirby Collector, because that’s kind of a gathering point of every imaginable kind of information on the subject. That’s kind of the central repository of Jack Kirby knowledge. The same sources that everybody has access to. I wanted to do a comic of the legend of Jack Kirby, what we know about Jack Kirby and the stories he’s told and the stories people have told about him and see what that looks like as a graphic narrative.” 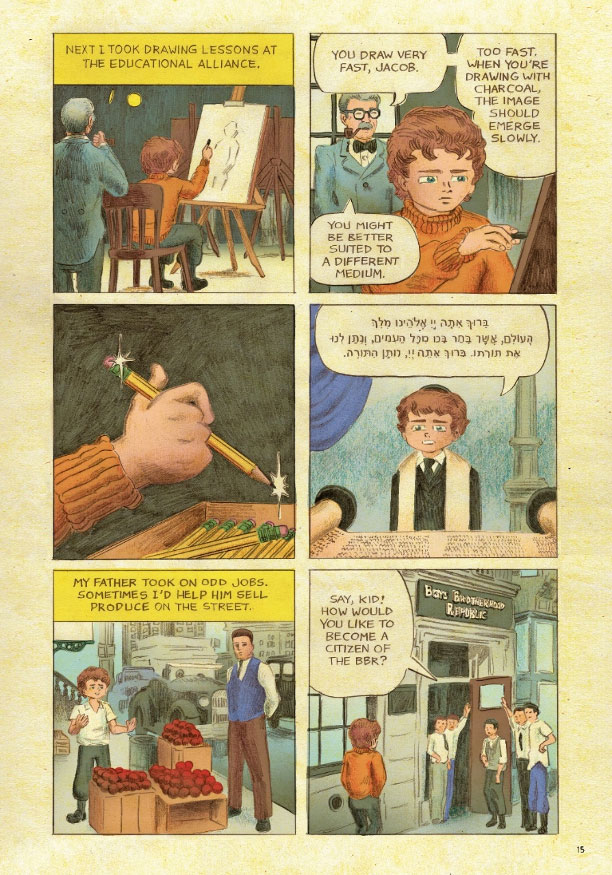 From those sources, Scioli weaved a first-person account of Kirby’s life. It’s a fitting, effective literary technique, and it’s one Scioli honed on a very related project: Fantastic Four: Grand Design, in which Reed, Sue, Ben, Johnny, and other characters take turns setting the narrative table.

This techno-biblical page is told from The Watcher’s point of view: 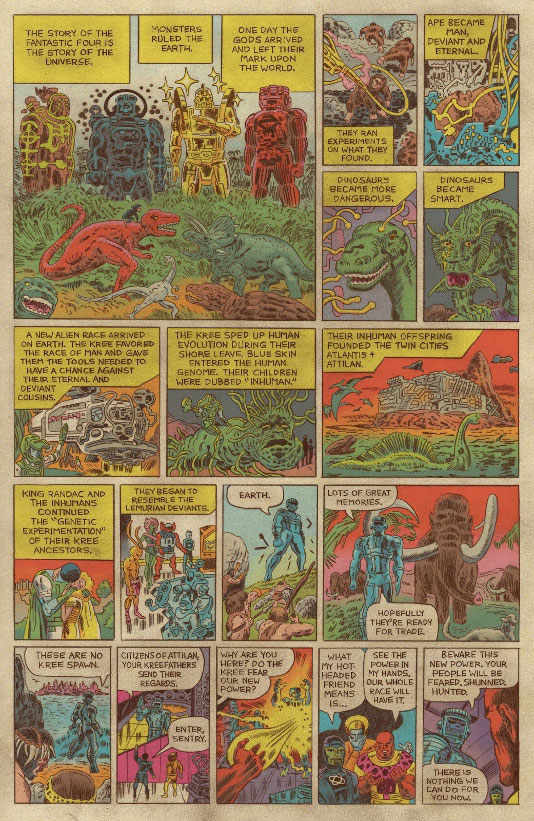 For his Kirby bio, Scioli uses a variable six-panel grid, which gives the story a steady visual rhythm. Scioli, ironically, is at his least Kirbyesque art-wise. There’s no two-page splashes that boggle the eyeballs, like we’ve seen in Godland and Transformers vs. G.I. Joe.

Scioli has been moving toward a tighter format with smaller panels anyway in Go-Bots and Fantastic Four: Grand Design (where the 25-panel grid really has to be read in the treasury edition to prevent postage stamp syndrome). Here, the panels are the perfect Goldilocks size in a consistent, non-showy format that keeps the focus on Kirby’s story and the characters in his life. 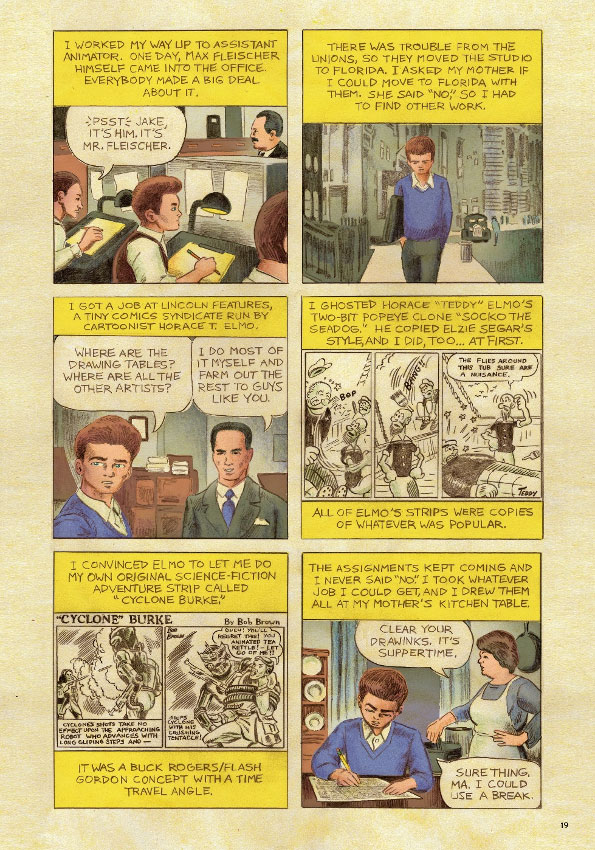 Kirby is best known for his Marvel work in the 60s, and why not? The Marvel mythos owns pop culture right now. But Scioli doesn’t get to the creation of The Fantastic Four till page 107, and rightly so because Kirby lived too much life up until that point: as a poor kid forced to use his fists on the street, as a dazzled discover of Sunday comics and science fiction, as a creative partner to Joe Simon, and as a suitor and eventually life partner to Rosalind Goldstein a.k.a. Roz Kirby.

Then there’s Kirby’s time as an army scout during World War II. Those experiences haunted Kirby’s dreams and comics for the rest of his life. 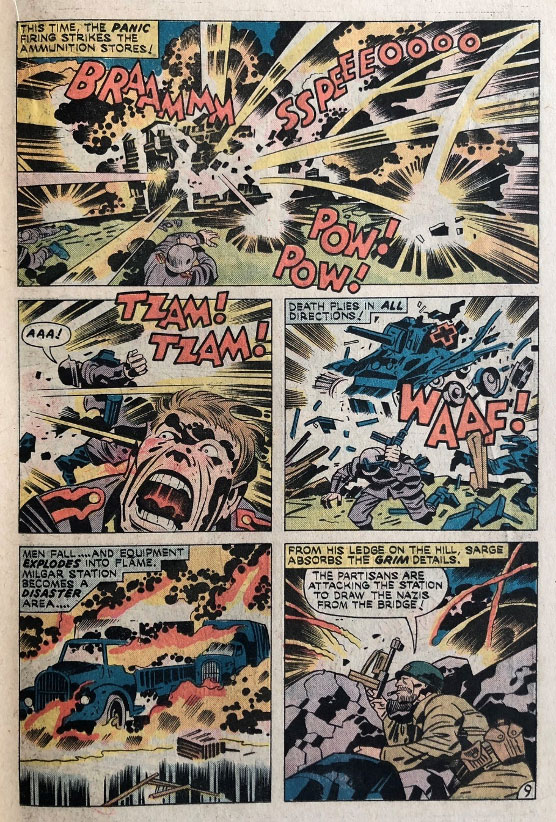 Kirby did a lot of war comics, including this page from Our Fighting Forces above, but plenty of his non-war comics were really war comics. If you look at something like “The Pact” through the lens of Kirby’s war experience, it’s hard to find another lens after that. 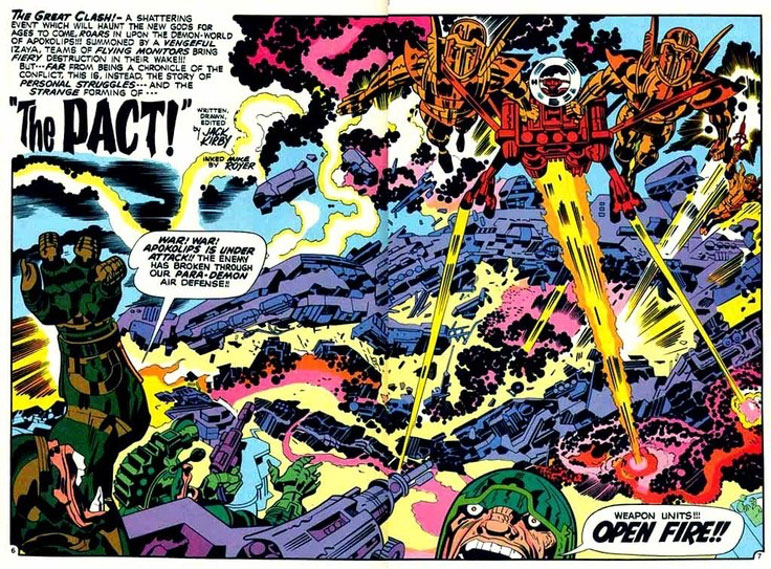 I’ve read many of Kirby’s war stories, but to actually see them in this bio is a revelation. Scioli shows us exactly why Kirby was traumatized by war in pages that must have been challenging to create and are harrowing to read. For my money, these are the most mesmerizing pages in the book.

You can’t discuss Kirby without mentioning Stan Lee, and the saga of Kirby’s ups and downs (mostly downs, at least personally) with the bombastic Lee are a major plot thread in Kirby’s life, for better and worse.

Since this is Kirby’s story, and based largely on Kirby’s interviews, Lee comes off pretty bad, first as the obnoxious gofer and office stooge, then as a prematurely withered comics vet, and finally as a slick circus barker for Marvel. (It’s no accident that Abraham Riesman’s biography of Lee will be followed by one on WWE Carnie-in-Chief Vince McMahon.) Kirby’s struggles with Lee, along with plenty of other editors and executives at Marvel and DC, are depressing but important to his story.

Too often, the most talented guy in comics, who practically built the industry, couldn’t catch a break.

Kirby preferred to write, pencil, and edit his own work from 1970 on, but it’s not like he couldn’t be part of a happy creative marriage. Scioli’s work opened my eyes to the length and greatness of Kirby’s partnership with Joe Simon, a team that produced Captain America, Manhunter, The Boy Commandos, the genre of romance comics, and plenty else. This was a much fairer and equal collaboration than Kirby-Lee.

Scioli’s detailed account of their creative and business relationship could be a book in itself. I’d love to see a similar bio of Simon. 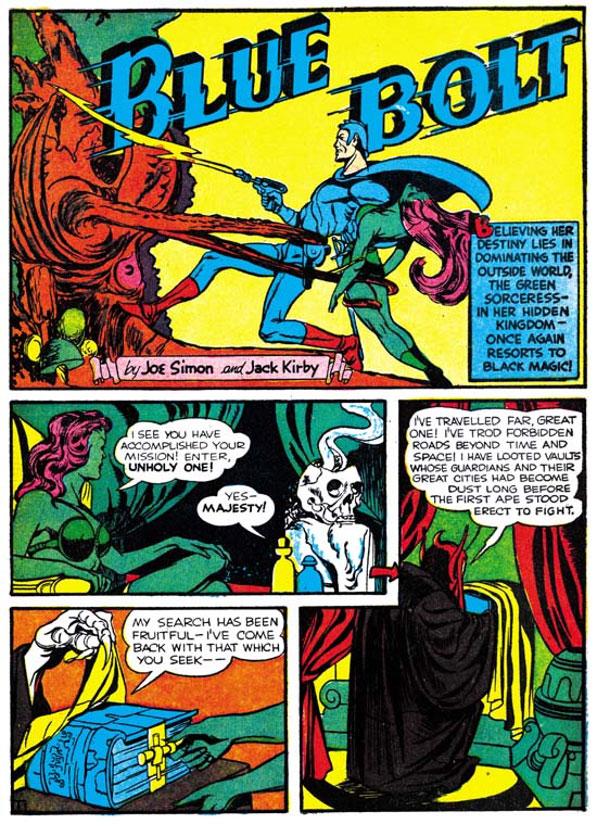 Scioli’s career is turning into a great story of its own. From the start, Scioli chose to have his work exist, to a large degree, in the shadow of Jack Kirby. His first comics look like they could been lost Kirby comics from the 1980s. 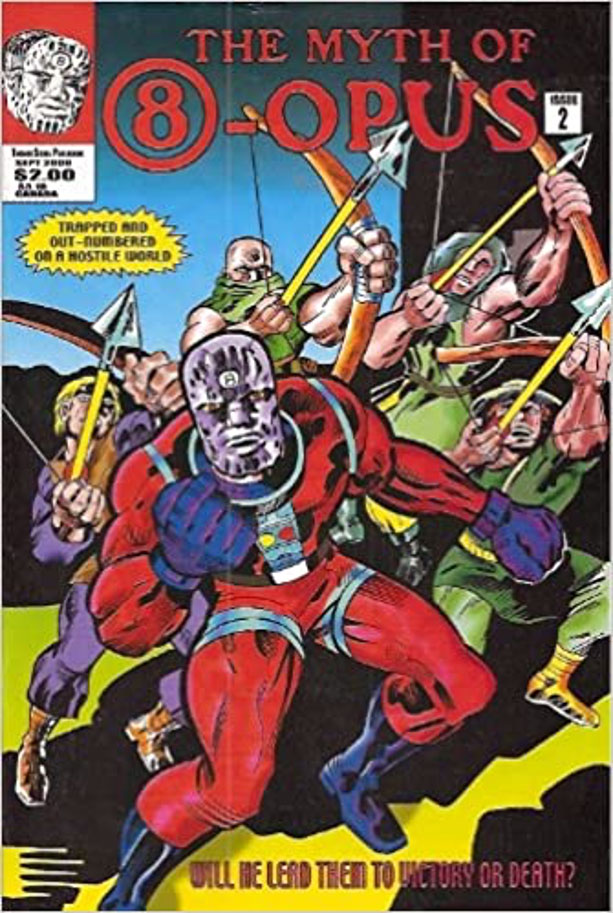 Godland was a good series, with often inspired art, but still felt a little like Scioli was doing cover songs. The cover songs were getting better and better, though. Scioli went deeper into Kirbyism on American Barbarian and First Family, and for my money, these comics are where he began to stand out as a true force in comics: an original Kirbyite, if that makes any sense.

American Barbarian in particular is an intensely Kirby comic that the King couldn’t have done himself. It’s all Scioli. Transformers vs. G.I. Joe is even more so. Though co-scripted with John Barber, Scioli does the vast bulk of the work in creating a corporate crossover that has more creativity and nuttiness and innovation than a shelf of creator-owned work. 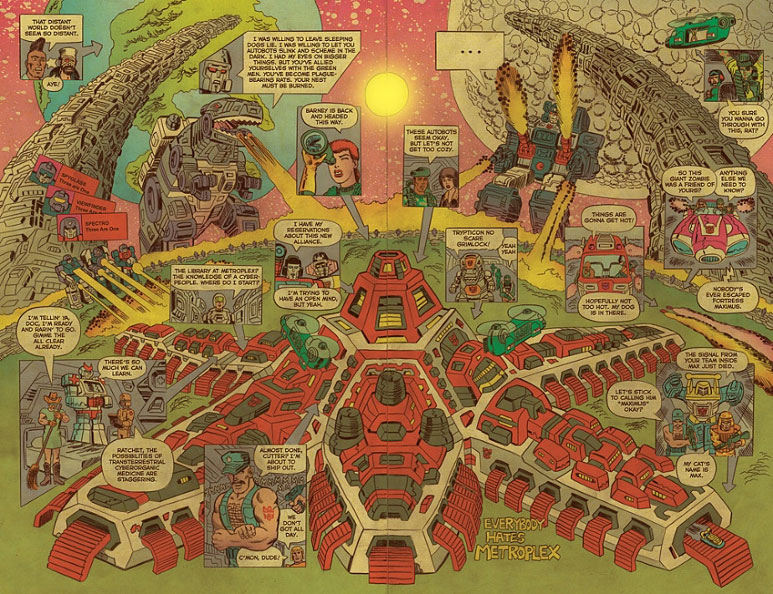 Super Powers, Go-Bots, and Fantastic Four: Grand Design feature a more restrained, but no less inventive, Scioli. That restraint served him well in telling Kirby’s story. With this bio, it feels like Scioli has reached an endpoint of sorts, but there’s no endpoint when it comes to Jack Kirby — or someone with Scioli’s skills and vision.

I think DC is nuts not to hire him to do The Fourth World, OMAC, Kamandi, or another ride in DC’s version of Kirbyland. I bet he could produce something to rival Walter Simonson’s Orion, which is almost unrivalable. 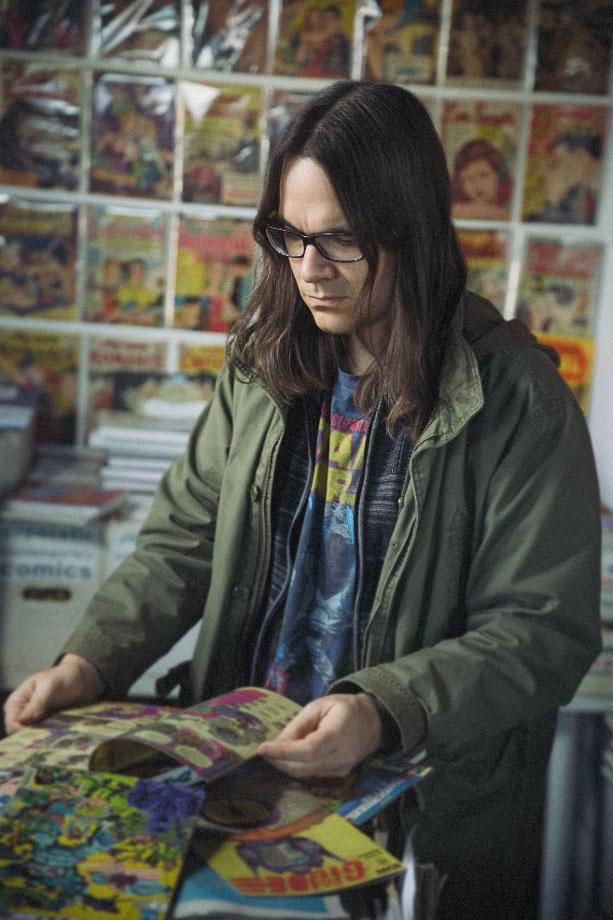 We’ll see where Scioli goes next, but there’s no mystery where this Kirby bio is going: to the front of the line of essential Kirby texts and graphic novel immortality.

Assuming there is a future in the world that’s coming, folks hundreds of years from now will read this book and be mesmerized by the story of a little guy with a pencil who never had it easy but changed the world and became a real-life Captain America.

For that, Scioli deserves a blurb straight from the King himself:

Pages reprinted from JACK KIRBY: THE EPIC LIFE OF THE KING OF COMICS.