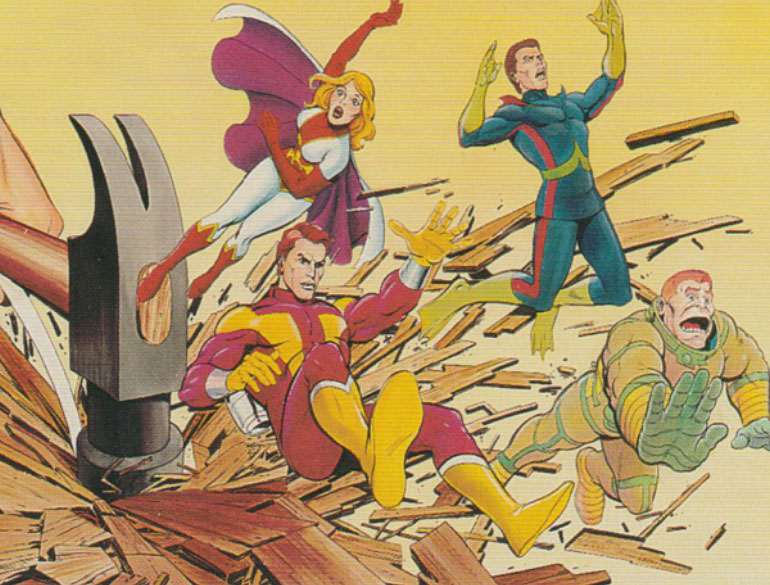 Some people carry a Bible in their pocket for comfort or as an inefficient bulletproof vest. I carry Jack Kirby: The Unpublished Archives, a 1994 set of trading cards that feature unused Kirby concepts from his time working in animation for Ruby-Spears.

To say these concepts all over the map undersells their bonkers quotient by 11 bags of hammers. There is no map, except the techno-mythological multiverse of Kirby’s mind. 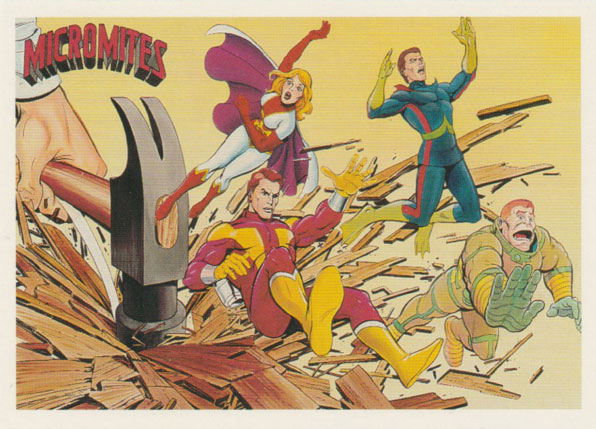 Among other wonders, there are striking designs for possible shows such as The Gargoids, The Street Angels, The Future Force, Camouflage Corps, and Animal Hospital (including duck doc Manly Drake).

There are vehicles such as TechnoTank and Battle Whale, plus the evil sorcerer Malacar’s ride, the Death-Dirge. Lava Man is pretty much what you would expect, but Giraffe — the human periscope — is no animal-human hybrid or stretching superhero, but just a long-necked fella built for snooping in windows. 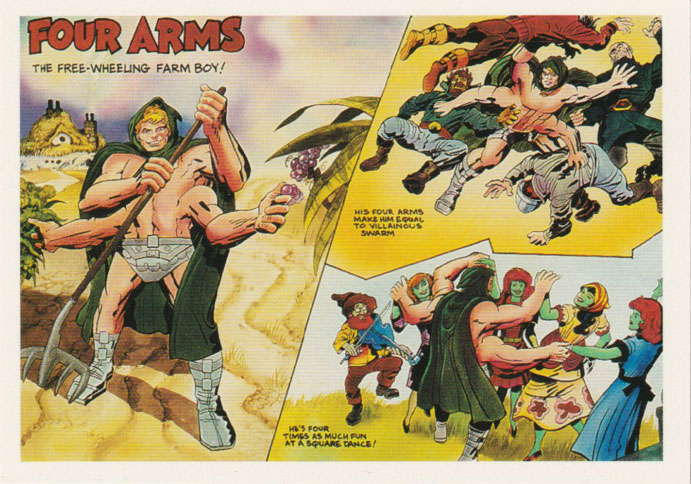 I feel absolutely giddy when looking at these cards: these neato, nutty ideas are the best advertisements I’ve ever seen for the virtues of pure creation. They’re also products of a time in Kirby’s life that was, in many ways, less stressful than his decades in comics.

Though Kirby doesn’t own these properties, at least he was paid well, received health insurance, and according to all reports received respect commensurate with his genius.

Kirby biographer and former Kirby assistant Mark Evanier told The New York Times: “He’d walk in, and all the young animators would fuss over him and salute him. It was fun for him to go in there, whereas in the past, when he’d gone to a comic-book company’s offices, it was a contentious atmosphere and a lot of emotional baggage.”

I could write a whole book about these cards, and don’t tempt me, I might. But for now here’s a closer look at two concepts with a primitive connection: cavemen.

The first is Earth Blasters, which introduced me to my personal Patronus, the mutant technoworm.

Card #5 — “Wild Worms” — explains the premise: “During a prehistoric meteor storm, the world split into two factions and a sinister society of cavemen took up residence in the Earth’s core. Over centuries they developed superior technology, which they used to create these Earth Blaster technoworms!”

Hey, once you’ve invented fire and the wheel, what else is left?

Five or six of these cards feature the technoworms, and they are what experts call a delight. 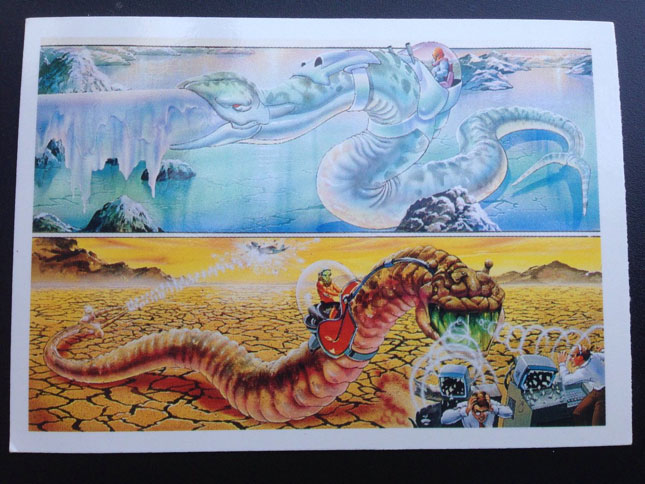 Card #22 elaborates the concept: “In this series, which Ruby-Spears named ‘Worm Stompers’ and then renamed ‘Earth Blasters,’ the technologically advanced cavemen devised a plan to conquer upper Earth using their massive worm creatures. Each worm has a different power, and can be controlled by the cavemen via the pods on their backs.” 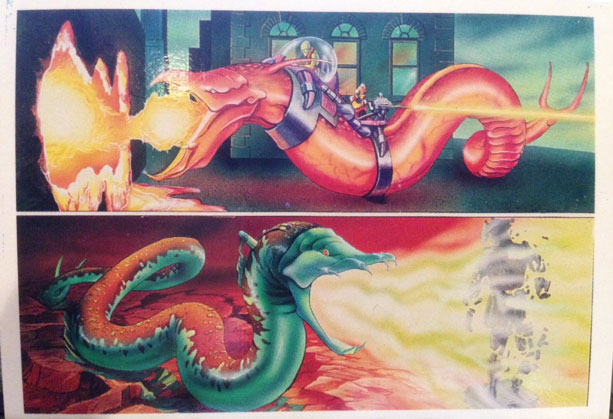 I think I like the name Worm Stompers even better than Earth Blasters, and I’m angry that neither is the name of a band.

You may be asking yourself how the technoworms get around, since they have low Uber ratings. Well, card #43 shows and tells: 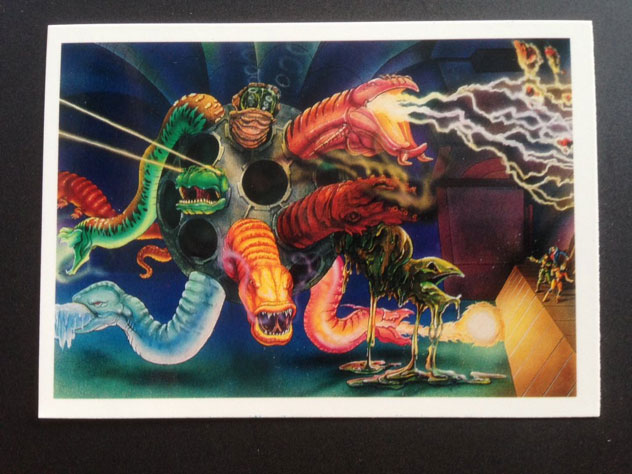 “This vehicle transports the mutant worms in the story ‘Earth Blasters.’ Both the ‘good-worms’ and ‘bad-worms’ use this type of transportation, out of which they bore and squirm when they reach their destinations. Jack Kirby embellished these villainous worms, giving each a specific power: one oozes glop, one breathes electromagnetic rats, one blows ice, et cetera.”

You can’t beat underground cavemen riding mutant worms, some of which ooze glop, in a war against the surface world.

Well, you can’t. I certainly can’t. But Kirby can. Dig this: 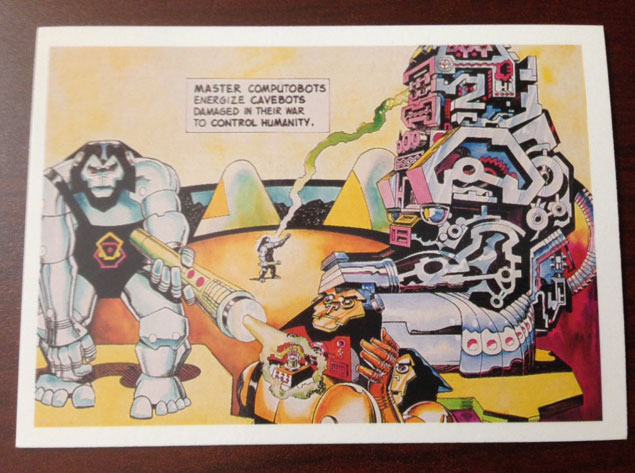 In Earth Blasters, the cavemen did alright. Sure, they were driven to the Earth’s core, but at least they had giant mutant worms to fight their wars and keep them company. In this other scenario, the cavemen didn’t fare nearly as well. They were roboticized by the computobots, who turned the cavemen into cavebots, which has got to hurt.

As card #46 — titled “Thunder Dragons” for some reason — puts it, “On a distant planet, a technologically advanced but social suppressed nation has grown. Master computobots have conquered the caveman species, turning the entire race into cavebots and controlling them in a plot to take over this alien world. Humanity is next on the evil computobots’ list!”

If the space gods were beneficent, they would gift us a Kirby Animated Universe, starting with Earth Blasters, to be followed up by Cavebots. Then, the worm-riding cavemen and the cavebots could wage war, ideally after putting our backwater planet out of its misery.

Such movies might never live up to the promise of these cards, though. Part of their glory is that they are pure ideaspace — trailers without movies, abstracts without articles. Just as Kirby presented these ideas to his colleagues, these cards present them to us.

Too often, it feels like humanity has evolved three nanometers past the caveman state. It’s nice to be reminded that our imaginations can go anywhere, and maybe so can we.

Even if our necks can’t compare to Giraffe’s. 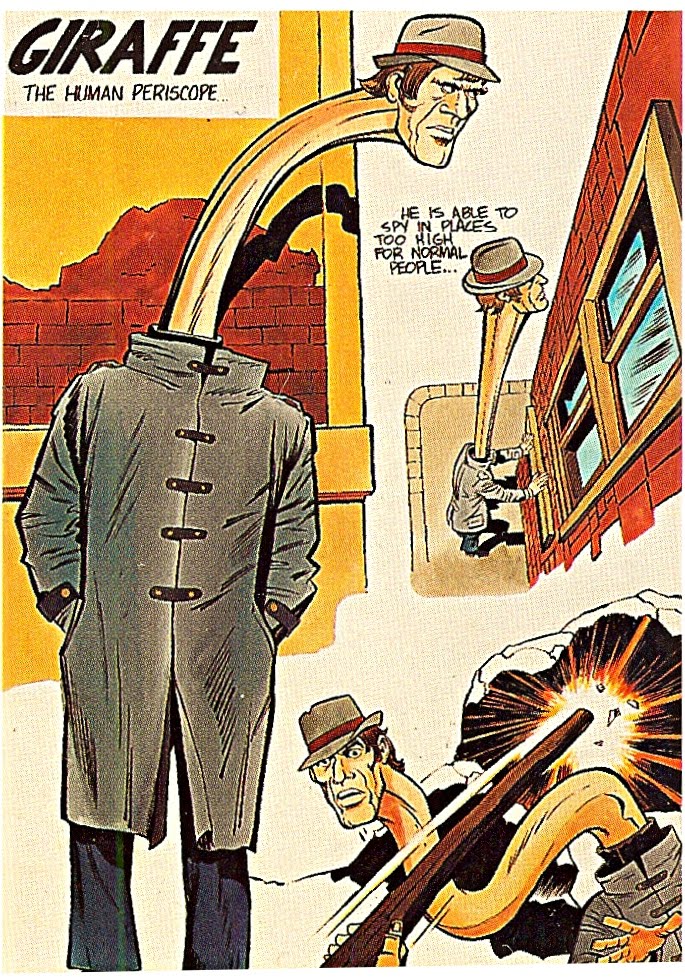