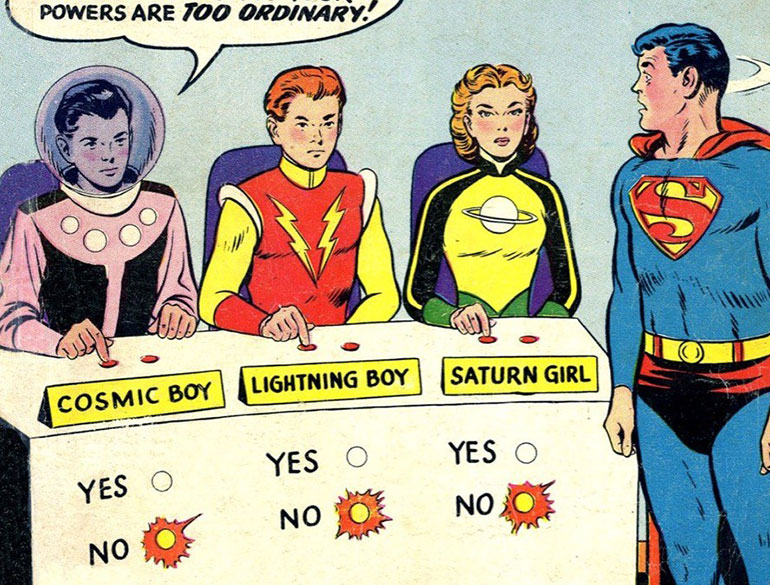 Alright Legion-fans (and soon to be fans), we’ve covered all the basics. Now we’re coming in hot with an in-depth look at the first appearance of the Legion of Super-Heroes: Adventure Comics #247, written by Otto Binder, with art by Al Plastino, cover dated April, 1958. 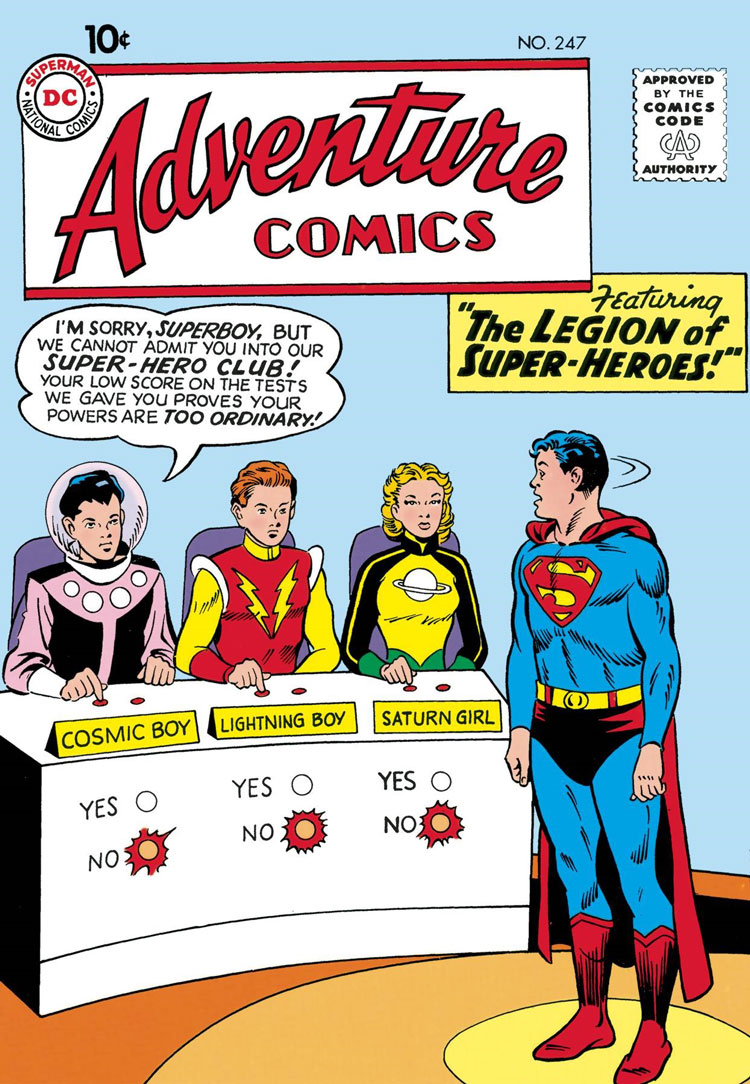 Note, incidentally, that a lot of these early Silver Age comics have no creator credits in the text. What information we have is based on research by fans and DC’s archivists working decades later. As such, the information is incomplete and we don’t, for instance, know who the colorist or letterer were on this story. You can find this issue on Comixology, DC Universe, or any number of reprints over the years, including Showcase Presents Legion of Super-Heroes and the Legion of Super-Heroes Silver Age Omnibus.

To start with, this feature appeared in Adventure Comics. I’ll have a lot more to say about Adventure at a later date, what it was and what its place was in DC’s publishing line-up in the pre-Crisis era, but for now suffice to say it was an anthology comic with rotating features, and at the time the main feature was Superboy.

The Superboy comics of the era followed Clark Kent as a teenager in Smallville, foiling villains and adventuring in his full, classic costume. In this issue, Superboy is surprised and alarmed when three teenagers greet him in ways that show they’re aware of his secret identity…

They quickly reveal themselves to be teens from the future who came to hang out with Superboy and also jerk him around a little:

They then take him in their Time Bubble to the future, and the story’s off to the races.

I actually have a theory about this issue, based primarily on circumstantial evidence and conjecture: I don’t think the Legion of Super-Heroes were ever intended to be anything more than a one-off Superboy adventure.

To start with, Superboy comics (and, indeed, Superman comics, and DC Silver Age comics in general) are positively litered with one-off aliens who pop in for a single comic, are shown the door by the title’s hero, and then are never seen or heard from again. If you really want a headache, try tracking down every occurrence of a Martian appearing in a Silver Age DC comic, then coming up with an explanation to rationalize all their different appearances. For another thing, the Legion wouldn’t appear again until a year and a half after this comic, in December, 1959’s Adventure Comics #267.

I think this story was only ever intended to be a fun little science fiction journey for Superboy, a chance to show him playing around with kids his age in the future, then throw them in the heap with all the other one-issue wonders. But something, whether it was fan demand or the compelling possibilities presented by the “teen super-heroes in the future” premise, inspired DC to bring the Legion back, and then keep bringing them back, and, eventually, to make them the lead feature in Adventure.

So, now you’ve got the basic premise for this issue: teens from the future who admire Superboy come back in time to bring him forward to their present, to hang out and show him how cool the Smallville of the future is.

I would like to propose a thought experiment. Imagine, if you will, that you are a huge fan of Alexander Hamilton. Imagine you create a special fanclub for other Hamilton Heads. You have a Hamilton-inspired headquarters that your Hamilton Club meets in. Maybe you dress in period attire and publicly model the virtues of Alexander Hamilton by, I don’t know, running for office and participating in political debates. Maybe you even write a Hamilton-themed musical.

Now let us suppose that you come into possession of a time machine. Naturally, the first thing you do is go back in time to meet your hero, Alexander Hamilton. And, once you’ve calmed him down, the next thing you’d do is bring him to 2019 to show him what the country he helped build has turned into. You’d show him Washington, D.C. Maybe you’d take him to a performance of Hamilton, just so he could see how people now think of him. Finally, you’d invite him to become a full member of your Hamilton fan club.

But first, obviously, you’d go out of your way to devise a series of competitions designed specifically to humiliate him by proving your superiority in all the things (debate, speechcraft, military organization) upon which he prided himself.

If that last part seems odd? Welp, welcome to the world of Silver Age Legion of Super-Heroes comics!

Then they bring him back to their headquarters and offer to let him join their club… If he can first defeat at least one of them in a one-on-one challenge of super-heroics. He fails miserably at all of them. 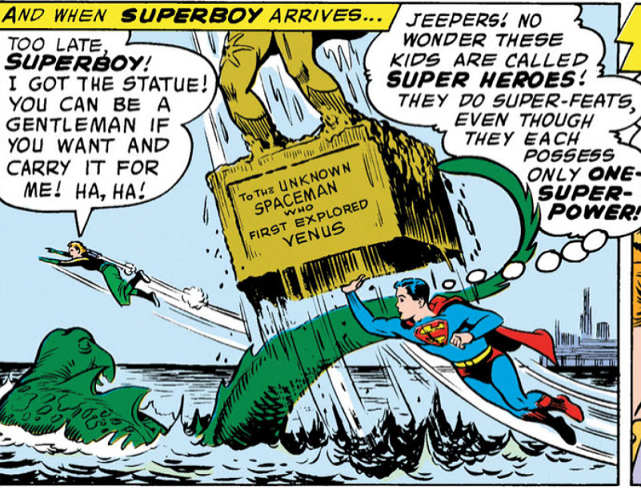 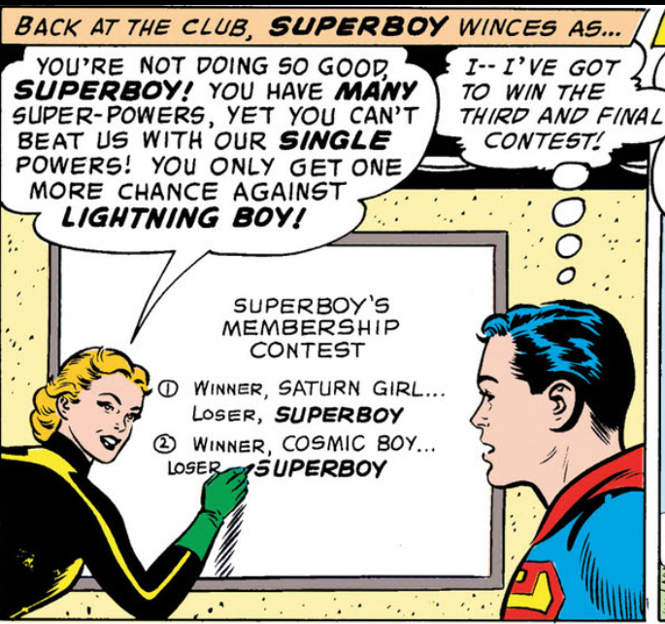 (I love Saturn Girl because, despite mostly having the Generic Heroic Personality that all Silver Age DC heroes have, she’s also consistently portrayed as being kind of a B.)

(I also love that, in the 30th Century, they don’t know who the first man on Venus was. It’s a fun touch of world-building!)

After thoroughly humiliating Superboy and making him cry, the Legionnaires reveal that it was all a big joke, and he’s on the team anyway!

For what it’s worth, Superboy then proves he really does belong on the team by solving a crisis in a way that duplicates all three of the Legionnaires’ powers.

Adventure Comics #247 is a great introduction to the Silver Age Legion because it’s not just the first Legion comic, it also follows a format that will become deeply familiar as you read these early adventures: Legionnaires being jerks for no readily apparent reason, then explaining it away in a single panel near the end of the story. I’ve come to love these stories, but if you find this type of storytelling irksome, it might behoove you to skip ahead to the Bronze Age after reading this one.

That said: I’d like to make an affirmative case for Adventure Comics #247.

To start, Al Plastino fills it with great, clean, inventive Silver Age art. It’s just a joy to look at, especially in the restored version that appears online and in the Legion Omnibus. Moreover, there’s just an incredible amount of story packed into a tight twelve pages, and it does it all without relying on overbearing narration.

But more to the point: I’d like to argue that this is an at least modestly realistic story of teens relating to each other.

Our natural instinct is to say “Of course you’d want to treat your hero with dignity and respect!” but that’s because we’re adults (I assume). We know how society works. But kids don’t care about that. Kids (pardon my language) fuck around with their friends.

(I mean, I can think of a dozen better ways, but this is the way the writers chose and I think it’s one that would resonate with kids in the Fifties.)

Moreover, even if you’re not on board with the particular story this comic is telling, it has a heaping helping of what Silver Age DC did best: super-heroes using their powers in cool and creative ways. These Silver Age DC stories are power fantasies, to be sure, but not in the brute sense of “what if I were strong enough to punch anyone who got in my way?” As we’ll see going forward, these comics are bursting with fun ideas about how you could take a relatively limited set of superpowers and do just about anything you want with them.

I’d highly recommend reading Adventure Comics #247 for yourself, both to introduce the Legion and to get a taste for Silver Age Legion stories.

From here on we’re going to speed up a little bit, covering multiple issues at a time and focusing on big themes and character introductions, rather than going issue-by-issue and blow-by-blow. In fact, the next column will attempt to cover everything from Adventure Comics #247 through justs before the death of Lightning Lad.

But speaking of character introductions… 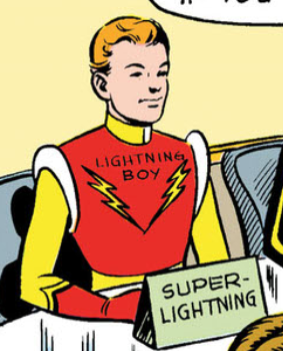 (Ignore the Lightning Boy on his chest; that would disappear soon, and his name would change to Lightning Lad).

We don’t learn anyone’s names or home planets or origin stories in this issue, but Lightning Lad is always one of the founding members of the Legion.

His real name is Garth Ranzz and he’s from the planet Winath.

Following a crash landing on a planet full of lightning beasts he gained electrical powers, along with his sister, Ayla (to be introduced later).

For now, Lightning Lad (and all the Legionnaires) has a fairly Generic Heroic Personality. He gets a bit more interesting, though, after he dies and comes back. 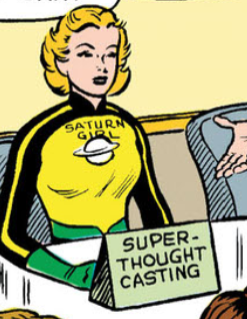 AKA Imra Ardeen, from Titan, a colony of Earth where everyone has telepathic abilities. Imra’s abilities, though, are generally portrayed as being above-and-beyond Titan norms.

She’s take-charge, serious, and a little bit cold. She’s also one of the founders of the Legion and the first lady president of the team.

At a time when female superheroes were hard to come by, Saturn Girl (and her fellow lady Legionnaires) was the rare heroine who was taken seriously.

Has magnetic field manipulation abilities, just like Magneto, but was created about five years earlier. Everyone on his home planet, Braal, has similar powers.

A major plot point that will come up later is that Braal has been in a recession for a long time and Cosmic Boy initially left looking for work. Braal, and the tough times there, plays a huge role in the Five Years Later Legion.

Cosmic Boy also gets either the greatest, or the worst, costume redesign during the Bronze Age.

That wraps it up for this edition of “Learning to Love the Legion”. Tune in next time for an assortment of random Legion appearances before they became ensconced in their regular place in Adventure Comics!