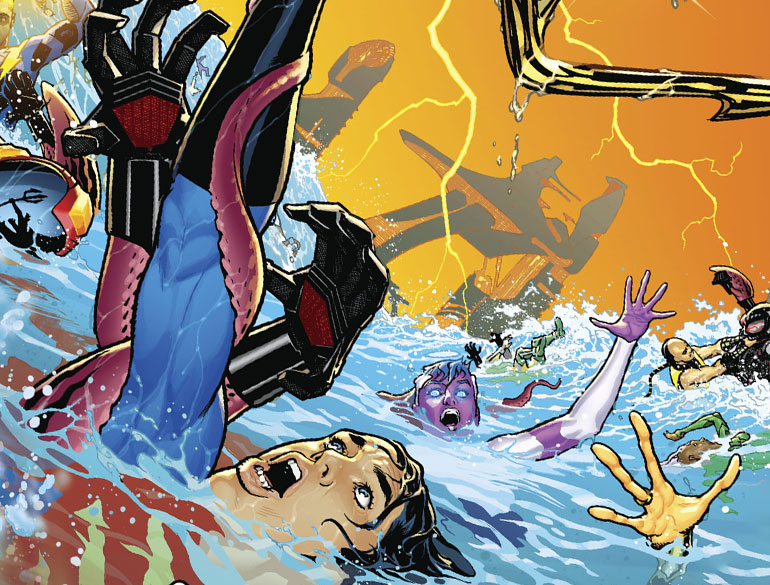 Welcome back, Legion fans! This month, we’re on to the second issue by Bendis, Sook, Von Grawbadger, Bellaire, and Sharpe — and things are starting to come together for this new Legion run. 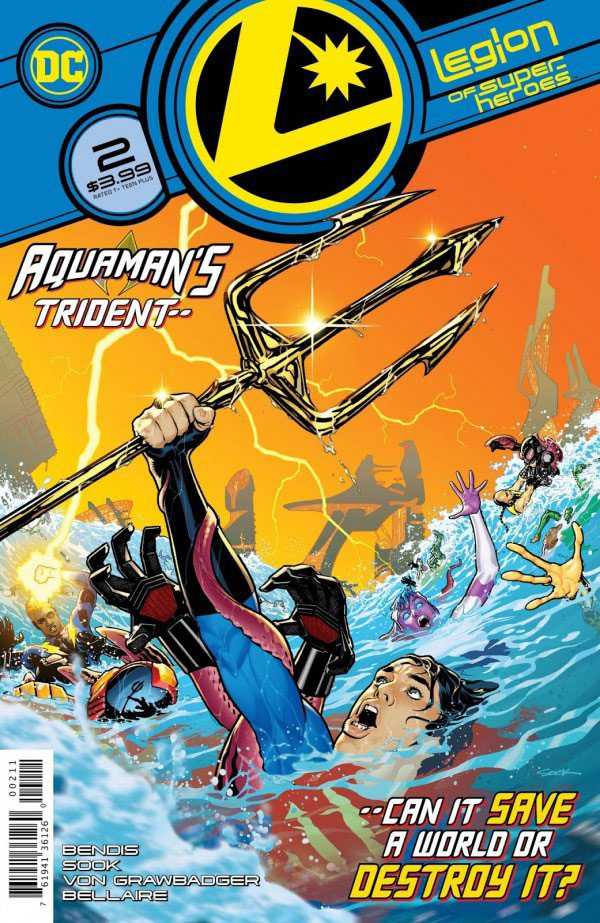 After last month’s premiere issue, this one feels a little more explanatory. We open where we left off, with all (or substantially all) of the Legion fighting the Horraz (whom, it is clarified in dialogue, are a criminal gang and not a specific species of alien). The Horraz are lead by Tortor, who’s likely to be a recurring character. Superboy accidentally activates the trident, which brings a torrent of water that floods Legion HQ and concludes the fight.

We get a scene of Rose having a standoffish meeting with the president of the United Planets, then conveying the gist of that meeting to the Legionnaires. Finally, the Legionnaires discuss the implications of recent events in their cafeteria, Heaven, and the team forms a plan of attack… which Superboy immediately goes on an unauthorized detour from.

About midway through this issue, I felt a distinct shift in my appraisal of this revived Legion of Super-Heroes. As the issue started, I felt the same sense of overwhelmed confusion, of a jumble of pieces not really fitting together, that I’ve had since this run started.

Then, sometime during Rose’s conversation with the Legion, I found myself getting absorbed in this new universe. Something just clicked; somehow the formerly disparate pieces started forming into some kind of order that made sense to me. I find myself somewhat more optimistic now than when I started this issue, and hopefully this issue will prove to be an inflection point in my appreciation of this run. 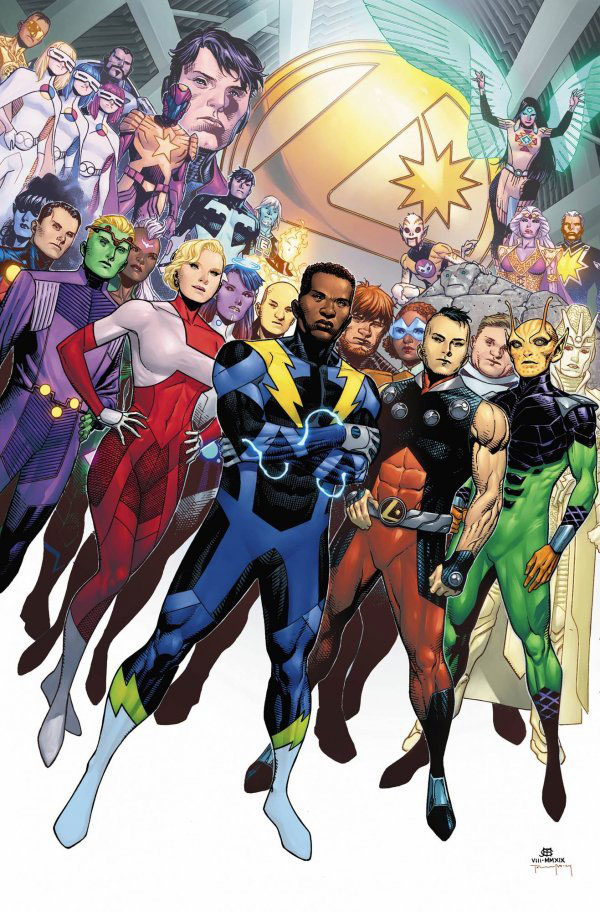 I will say that writing these columns is probably helping me to appreciate this run more than I would if I were just reading it for amusement. I wouldn’t necessarily say that it rewards close reading and attention to detail (though it does); it’s more that so much is going on in every panel, and it moves so quickly, that a fast, cursory reading leaves the reader confused. Starting the run with an all-hands-on-deck fight is a great way to get into the action fast, but with the amount of exposition and world building these early issues require the action scenes don’t get much room to breathe and the result is chaotic.

That said: I feel like things are falling into place now. This Legion’s universe is getting more defined, more plot threads are being laid down and previous threads are being clarified. It feels more cohesive and like it’s going somewhere interesting.

On the other hand, at this point, it still feels like we’re in the stage of “anticipation of getting somewhere interesting” rather than being something enjoyable in-and-of-itself.

The characterization and “character voice” that I was so concerned about in my last column seem to be improving, if only slightly. This panel, with Saturn Girl, leapt out at me: 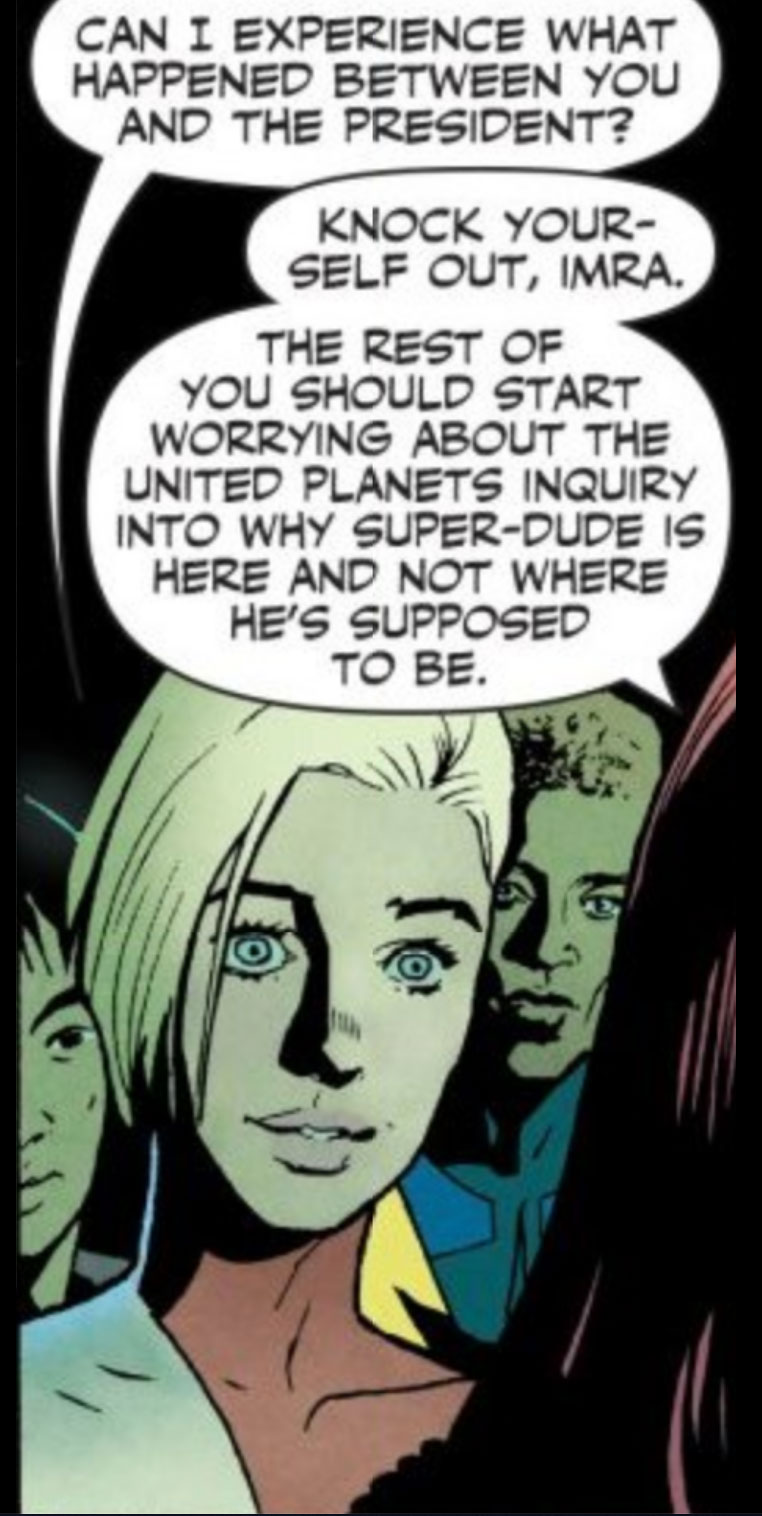 Her wide-eyed look as she make an unusual alien request really struck me. Saturn Girl’s been fairly prominent in this run so far and I like that she’s just a bit weird and off.

Don’t get me wrong, I love Silver Age bossypants Saturn Girl, but it’s always struck me that someone born psychic, on a planet of psychics, would have difficulties integrating with a non-psychic society. Imra excitedly asking permission before entering someone’s mind feels like a part of that socialization, and like, perhaps, she’s had difficulties with forgetting to ask in the past. I might be reading too much into it, though.

We’re also seeing some differentiation in how some of the other Legionnaires speak. Ultra Boy has a very formal manner of speaking, with certain unusual words like “father-one.” Rose is a bit more mature in her voice, if also a bit brusque. It’d be nice if that differentiation moved a little faster, but for now it ads a bit more color to the vocal palette.

Assorted notes and bits of speculation:

Imra finishes the big fight by broadcast a Sleep command, implying her telepathic powers include not just reading thoughts and communicating, but also sending mental commands that are at least somewhat difficult to resist. Saturn Girl’s powers have always been somewhat inconsistent, so it’s interesting to see how they’re interpreted here. 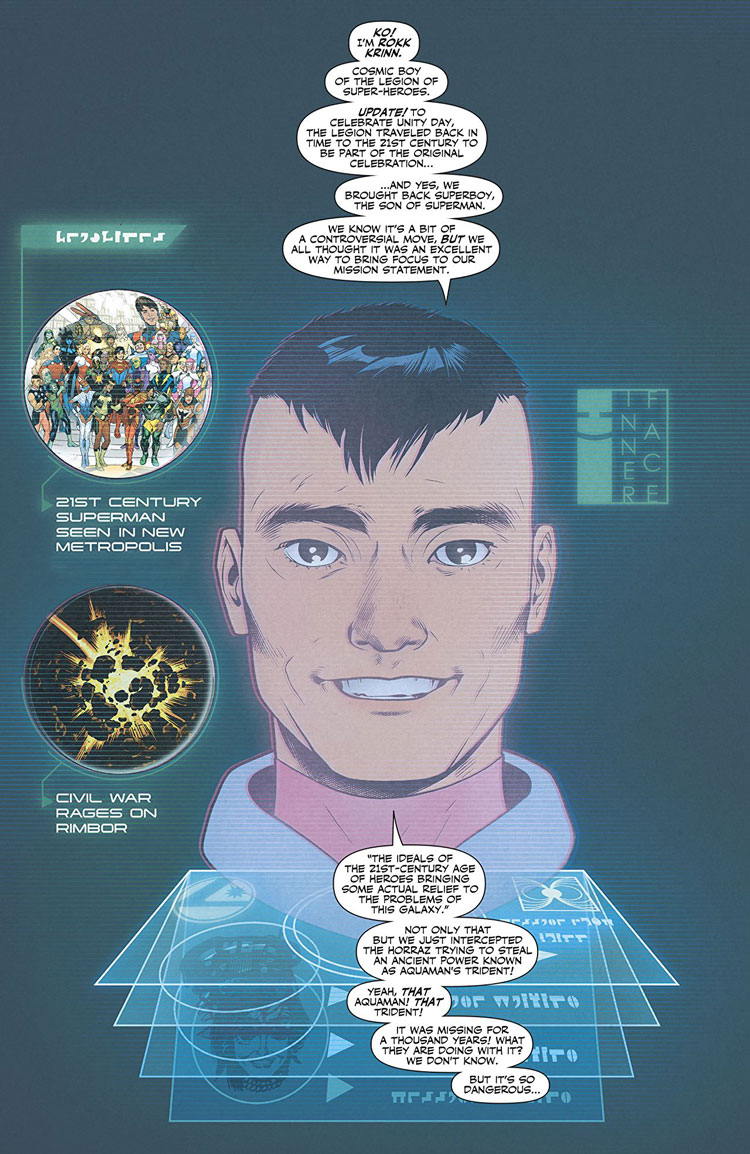 There’s a civil war happening on Rimbor, which is Ultra Boy’s homeworld where his Father-One, who sought Aquaman’s Trident, is influential. This seems likely to become pretty important in the near future.

Somewhat confusingly, the action in the big fight that opens the issue gets interrupted by a direct-to-camera message from Cosmic Boy using something called Innerface. There are headlines along the side of the “screen” (see above) and a set of waiting message below. Seems like some kind of Thirty-First Century social media app.

The placement within the issue is a bit odd because Rokk’s engaged in battle on the pages before and after, yet he seems to be describing the events happening right at that moment. Is this a broadcast? A message to his teammates? Is he talking directly to the reader? Unclear! 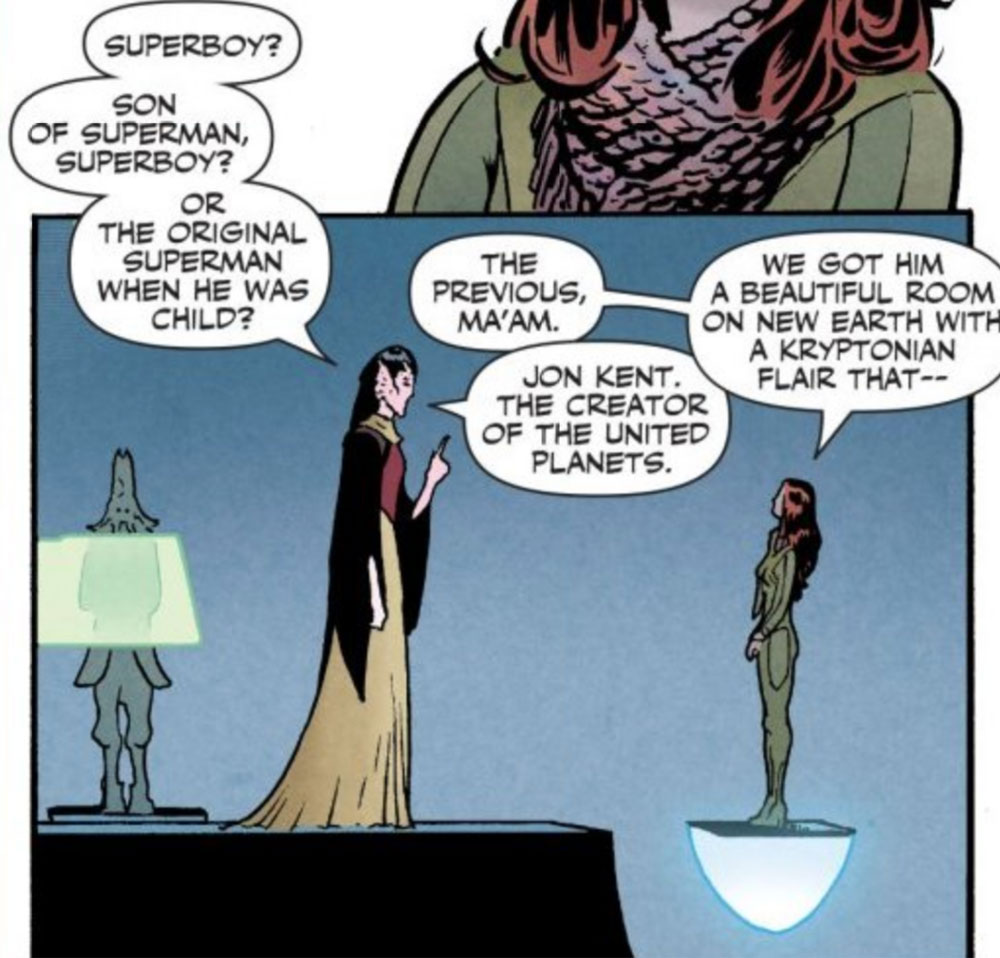 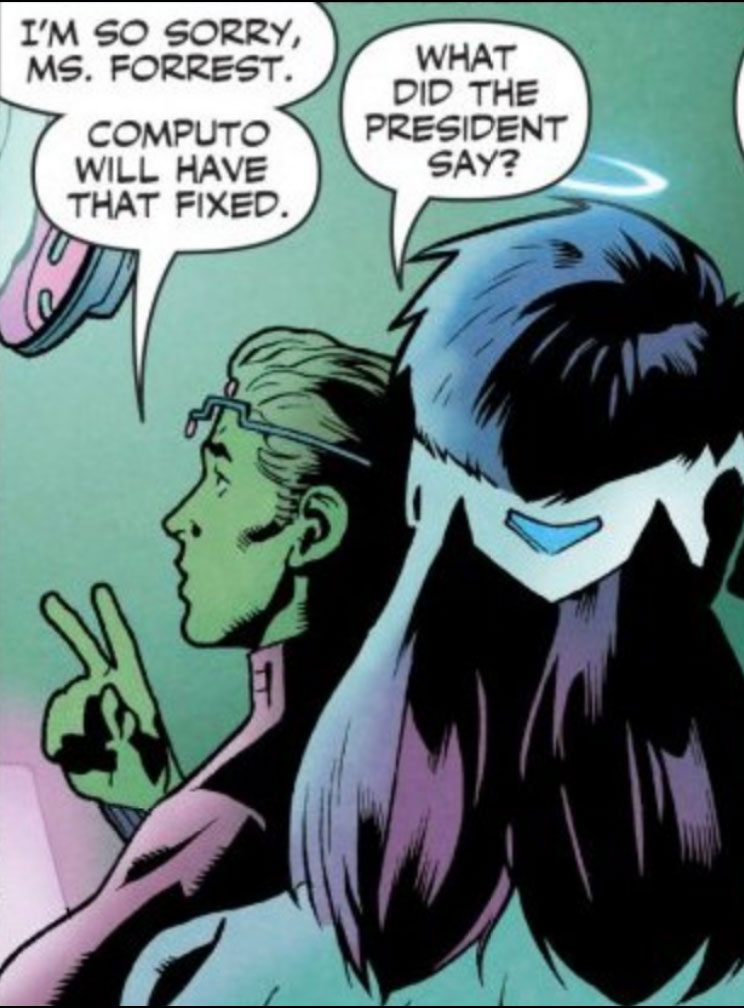 …and a nod to Computo, another potential future plotline. 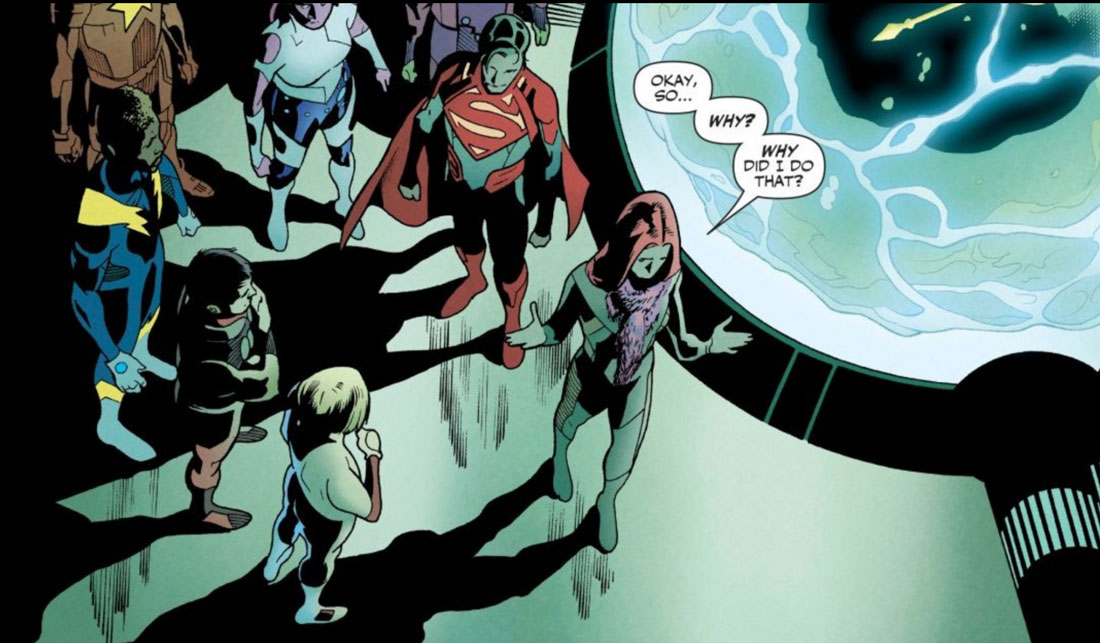 Rose seems to be having a bit of difficulty understanding exactly why she does things, which is interesting because, in the Millennium mini, she seemed to have a pretty good handle on the whole Rose/Thorn deal. Saturn Girl helps her out by examining her mind and pulling out details to make sense of her actions. I’ll be interested to see if there’s more to the Saturn Girl-Rose/Thorn relationship.

Interesting political note: The UP and the Legion are independent entities in this run. Also of note: The home of the United Planets Great Hall is on Daxam (notable since Daxamites are famously unfriendly to outsiders), and the UP President is referred to, at one point, as Madamhonor President Brande. Possible relation to R.J. Brande?

And, if so, to Chameleon Boy? Not a ton of resemblance…

Alright, one other big thing.

I didn’t mention this in the last column, but they’ve introduced something called Frichtman Tags. Basically, it’s taking the codename-real name-homeworld-powers tag that would show up in the early pages of older Legion comics and making them an in-universe thing, to help people remember who everyone is. Everyone is more-or-less constantly walking around with a little glowing panel identifying themselves hanging over their shoulder.

In that first issue, I found it kind of cute and clever. Now… I’m having my doubts. 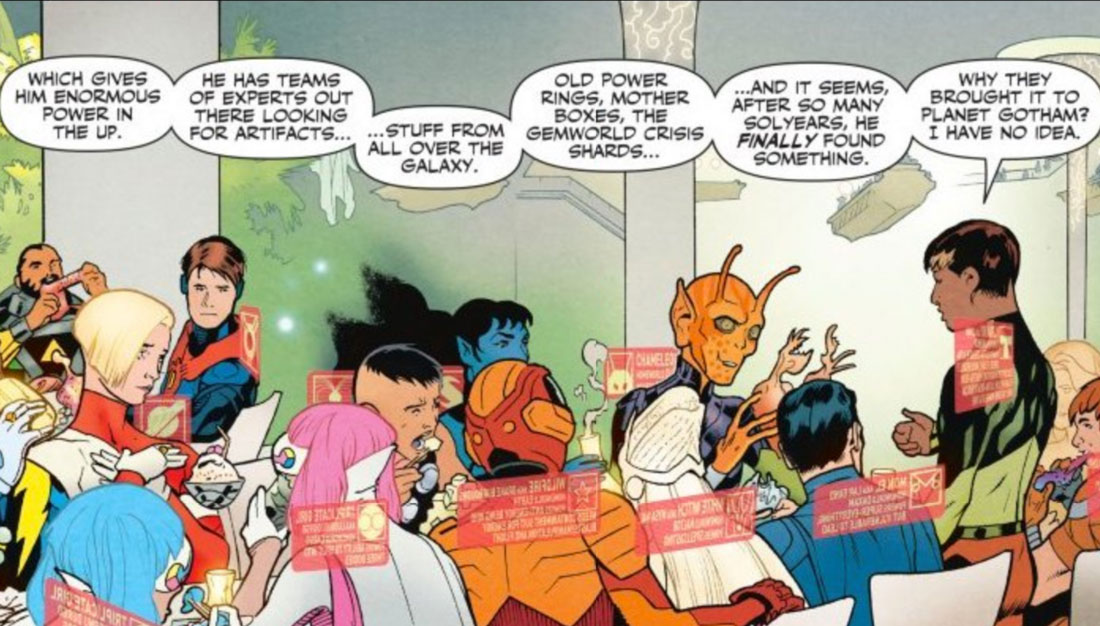 In putting this comic together, the creative team uses some fun digital effects and transformations to add the Frichtman tags into scenes. It looks neat, but… making the tags an in-universe object, and making them “work” in-universe, makes them way less useful for readers. When tags are an out-of-universe aid to the reader, they can help easily identify characters. Here, you can sort of read them if the character is positioned exactly right.

But sometimes a character’s head blocks the view, or the character’s at an angle and the tag is unreadable, or they’re facing away from you so the tag is backwards. The result is that sometimes you can read them and see who they’re pointing to, but often you can’t, and even where you can it’s frequently a chore to make out what the tag says. They’re not very useful to the reader, and at this point it feels like a lot of work for the letterer, for a joke that isn’t really amusing any longer.

It’s interesting color for the universe, but at this stage it feels like something that’s more of a clever idea than a good idea.

All of that said, I liked this issue somewhat more than the last, and I’m genuinely intrigued by where this series is headed. How about you? 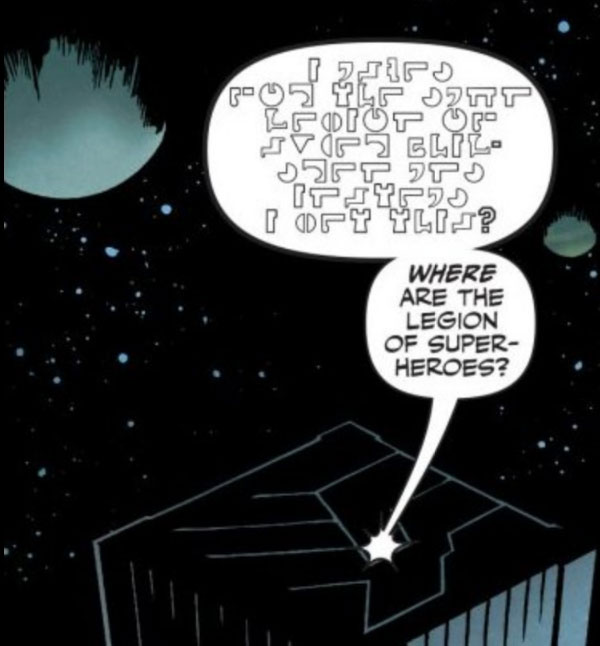 I ASKED FOR THE DAMN LEGION OF SUPER CHILDREN AND INSTEAD I GOT THIS? 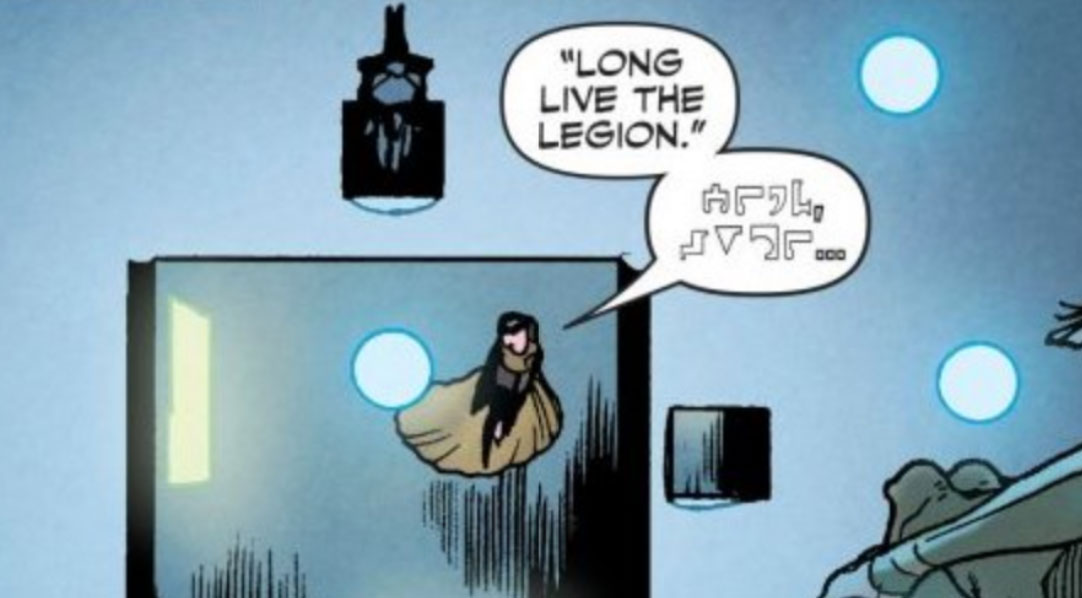 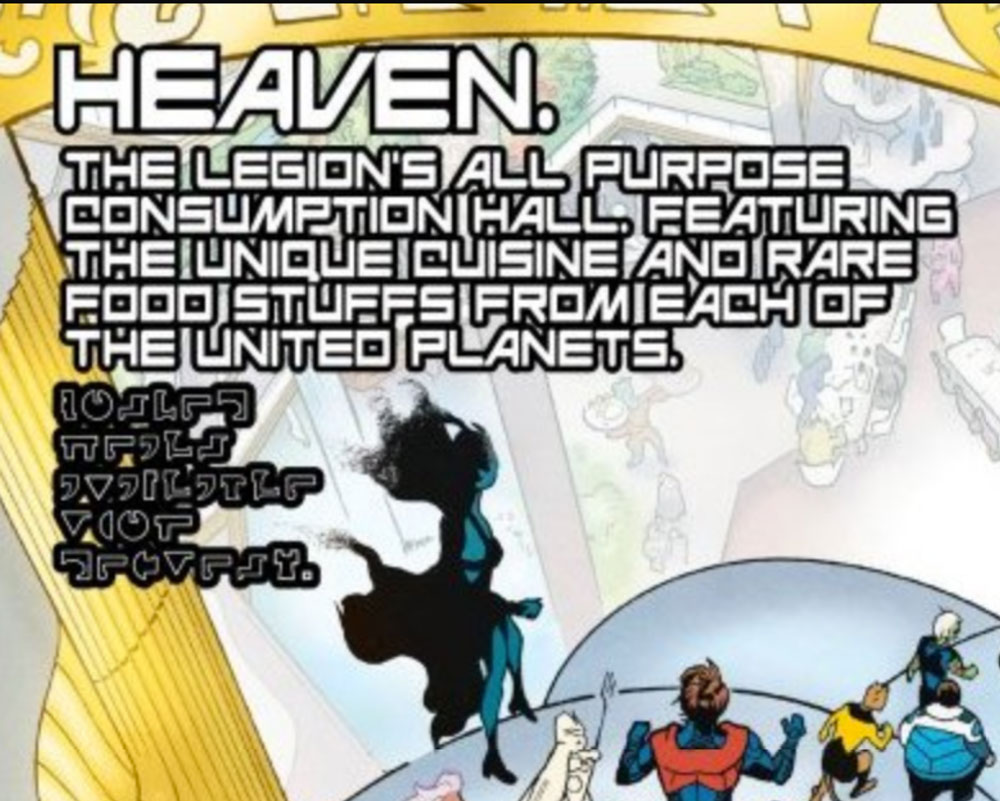