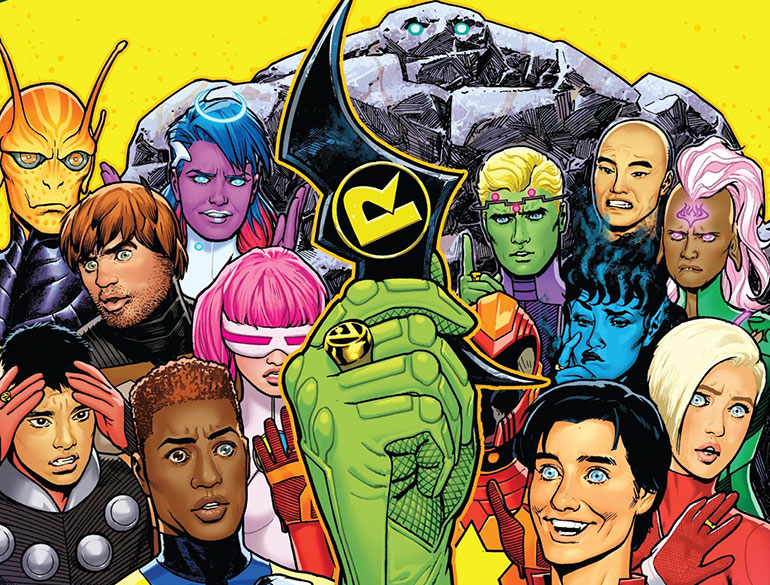 We’re back for another look at the latest issue of the current Legion of Super-Heroes series — that is, issue #3 by Brian Michael Bendis, Ryan Sook, Travis Moore, Wade Von Grawbadger, Jordie Bellaire, and Troy Peteri. This month, we get more sense of the new status quo for Rimbor, we see more of the contours of Saturn Girl’s powers, and we get a hint at a dark future for Damian Wayne. 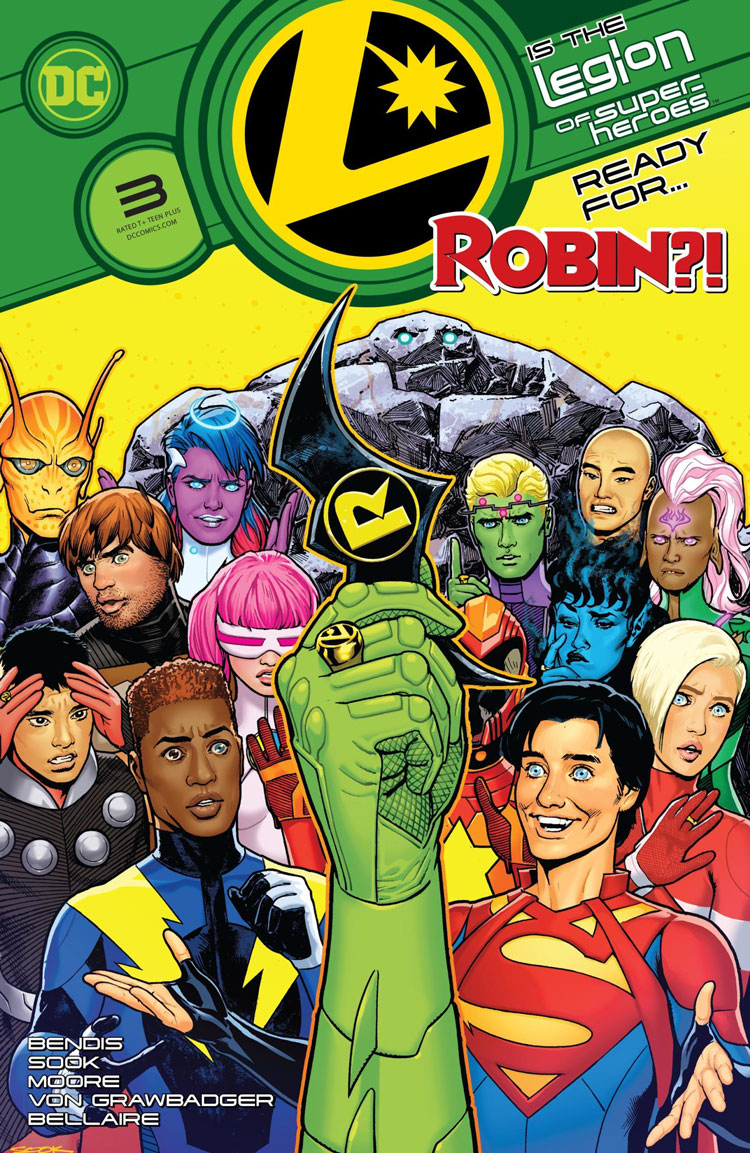 Cover art (and interior art below) by Ryan Sook

Where last issue ended with the Legion splitting into teams, this issue follows three plot lines that intersect at the end: One team travels to Rimbor to investigate Ultra Boy’s father, Crav Nah; one team travels to Planet Gotham to interrogate Mordru; and Superboy travels back in time and retrieves Damian Wayne. All three teams wind up back at Legion HQ as the situation with Crav Nah gets worse.

This issue opens with an Innerface message from Dawnstar. I’m not sure if my copy had the Innerface page inserted in the wrong place last issue, but now that I see it placed at the very start of the issue it makes more sense to me as both a recap and an introduction to a particular legionnaire.

In this case, we see Dawnstar given a last name for the first time, Gr’ell, presumably in honor of her co-creator, Mike Grell. 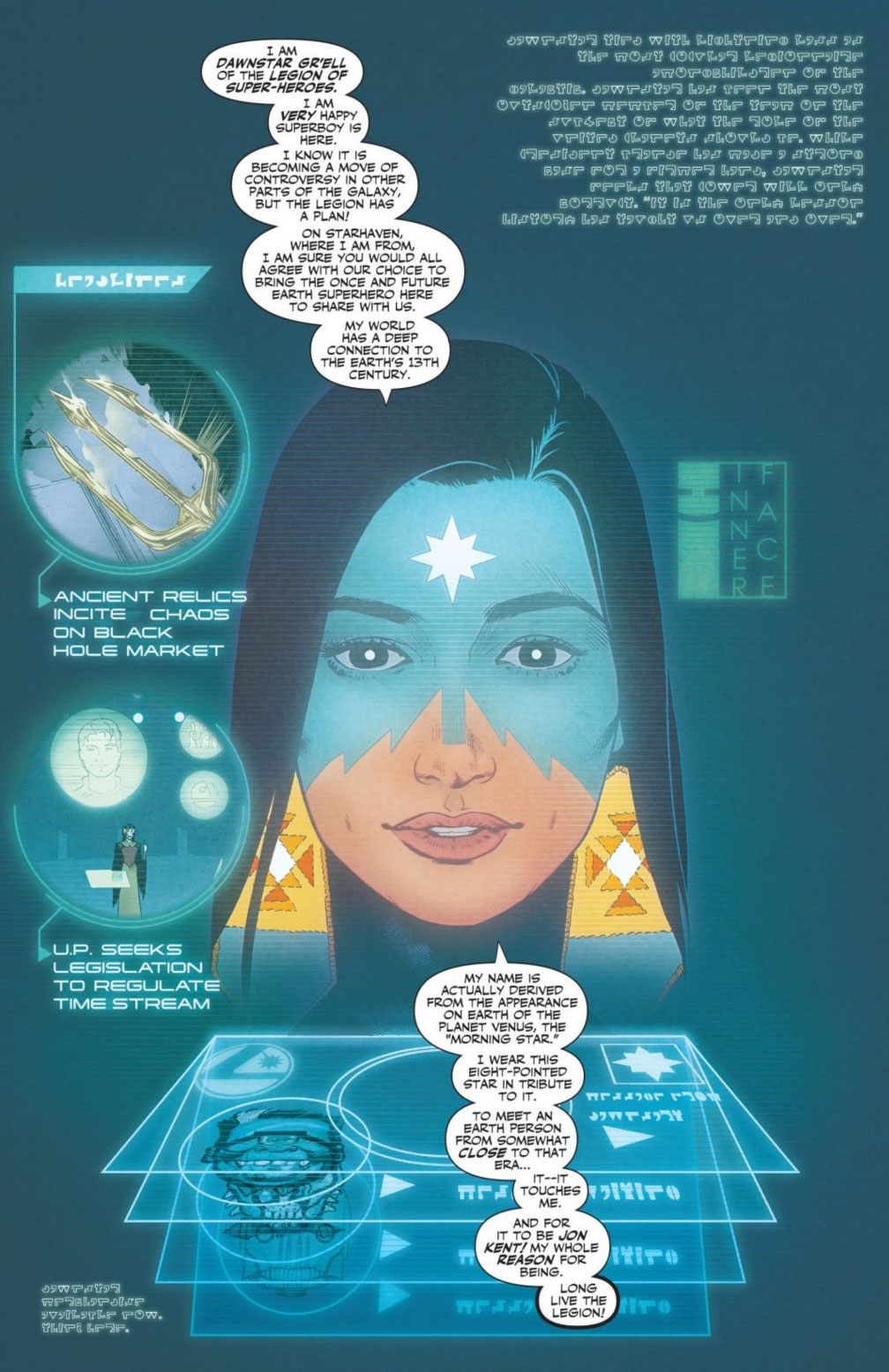 Other than that, I find my appreciation for this new Legion continuing to grow. I’m getting a bit more sense of the characters and relationships (though similarity of voice remains an issue).

Splitting the team up to deal with multiple plot threads worked very well, and as this issue ended I felt, for the first time, like I had a fairly good handle on what’s going on and where things are going. There’s been a lot of chaos and confusion heretofore, which is a perhaps necessary byproduct of dropping us in Legion res, but things seem to be finally finding a kind of order.

I will say though: I’m really ready for Superboy to go to that orientation the Legionnaires have been pushing since the first issue. I certainly understand why you wouldn’t want to dump a load of backstory in the first issue (on top of character introductions and plot setup), but after three months of talking about it I’m ready for them to finally get to the fireworks factory. 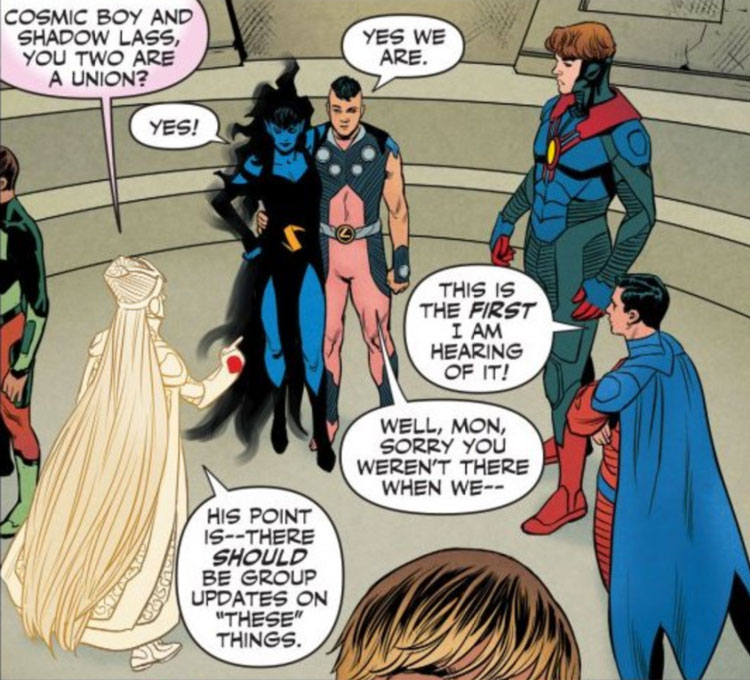 Shadow Lass and Cosmic Boy are an item. Shadow Lass has, in the past, been primarily romantically linked with Mon-El, and in some iterations with Karate Kid and Ultra Boy. Cosmic Boy was married to Night Girl in the pre-Zero Hour and Retroboot continuities, and had a relationship with Saturn Girl in the Reboot Legion. We haven’t seen Night Girl, yet, though she’s usually affiliated with the Substitute Legion. 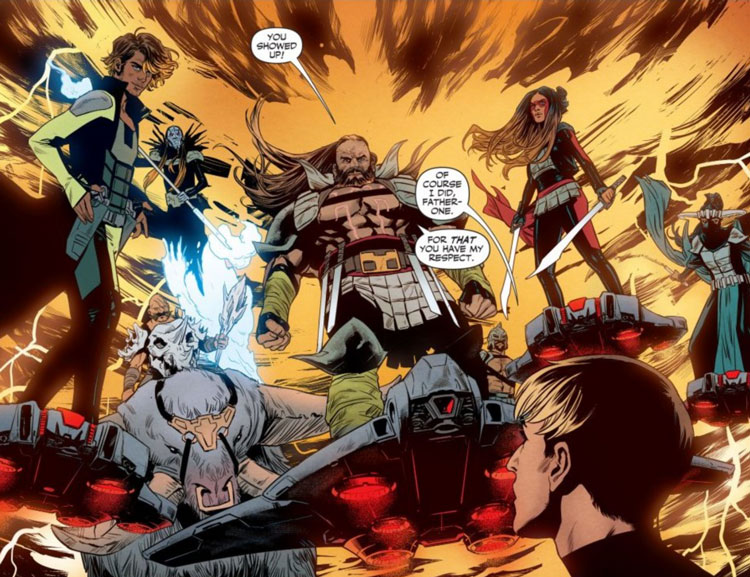 They put way too much work into the design of Crav Nah’s flunkies for them to just be menacing in this one double-page splash. Expect to find out more about them and their special powers and abilities in a future issue (possibly #4, if the promised showdown with Crav comes to pass). 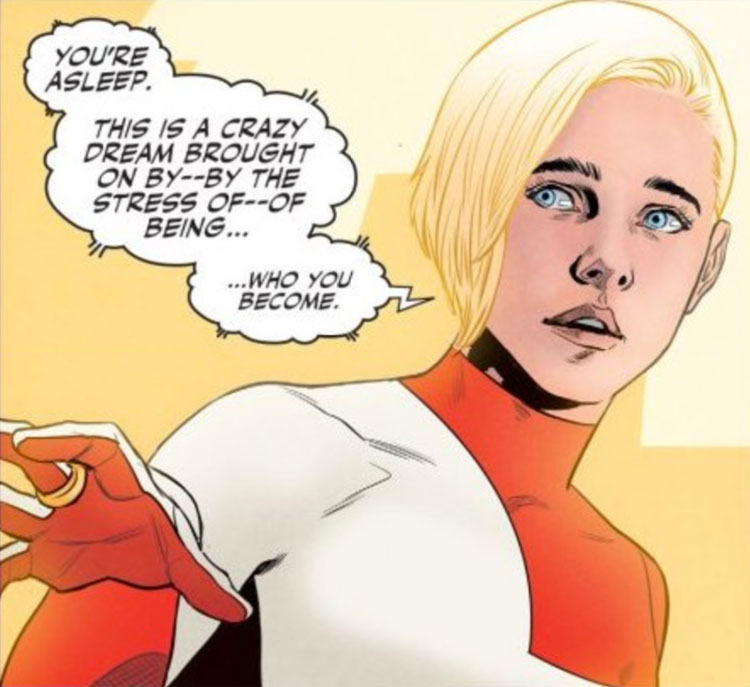 Some real ominous stuff about Damian Wayne from the Legionnaires. First from Saturn Girl…

Then Chameleon Boy. It gets walked back, somewhat, by Brainy, though:

So, at some point in the future Damian will (to a certain point of view) become extraordinarily bad. On the other hand, that future could be avoided, which is a nice way to portend a plot line while also hedging that it might not happen (given the vagaries of continuity super-hero comics). 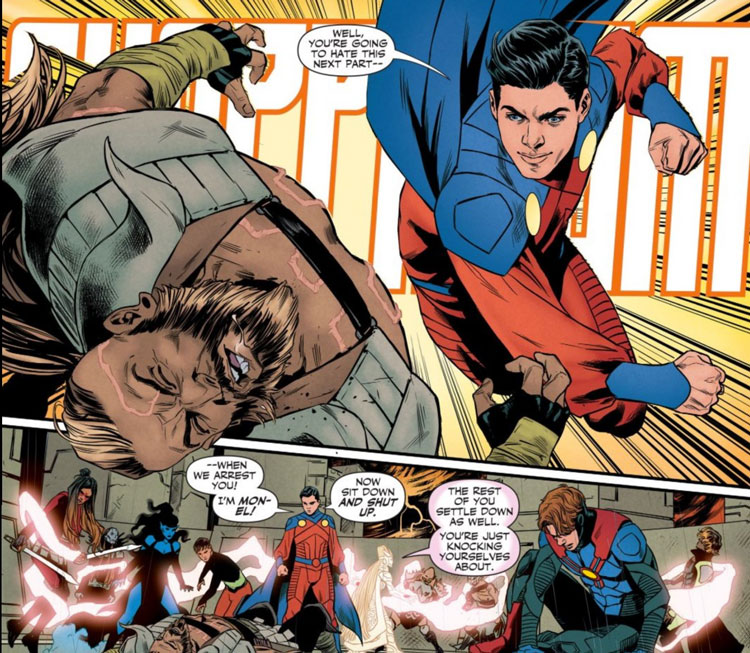 We get to see some of White Witch’s powers in this issue. I always liked White Witch, but she suffered somewhat from the fact that she pretty obviously existed because of the D&D obsession that Paul Levitz wore on his sleeve.

As such, her exact powers have always been vague and hand-wavey, in the way that all magic in fiction tends to be vague and hand-wavey if there isn’t an explicit system laid down. Here, she seems to have the ability to generate a purple energy that can be used to bind. Cool.

We also get more in-depth on Saturn Girl’s powers in this issue. Saturn Girl’s always been interesting, and her exact powers, and the formidability of them, tend to wax and wane with the creators’ interest in her as a character.

This version of Saturn Girl is very much on the more powerful end of the scale. In addition to getting another demonstration of her sleep command (in this case, an ineffective one), we see her generate an immersive experiential illusion in Mordru’s mind, then later we see her hypnotize Damian Wayne. I don’t necessarily want to call her the Jean Grey of the team, but it is the obvious comparison, and it seems likely she’ll play a similarly important roll.

This issue also gives us somewhat closer looks at Dawnstar, Mon-El, and Cosmic Boy. Dawnstar is somewhat starstruck by Jon Kent, Mon-El is brash and a bit touchy, while Cosmic Boy isn’t very confident in his own leadership ability. It’s a bit slow going in terms of exploring these personalities, and there are still quite a few Legionnaires who’ve only made background appearances, but that’s pretty understandable given the size of the team and the necessity of telling an interesting story.

This new Legion series continues to grow on me, but I’m waiting to pass judgment until we’ve at least finished the first story arc.

Do not feed the drakes. Seriously.

We live by the code of the …(obscured)

But I found another occurrence, smaller and reversed, and I zoomed way in and flipped it. The last word is Bat. “We live by the code of the Bat.” 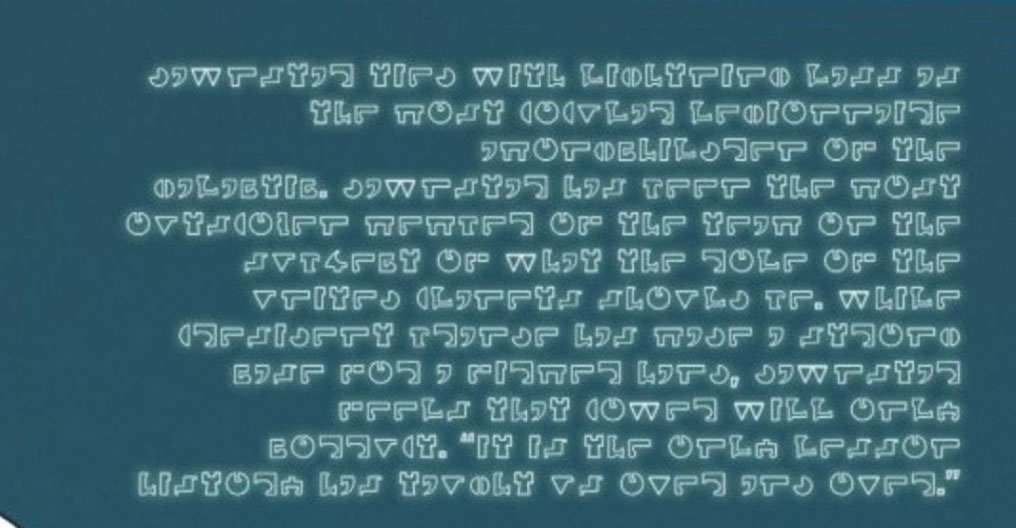 Dawnstar tied with Lightning Lass as the most popular Legionnaire among children of the galactic (sic?). Dawnstar has been the most outspoken member of the team on the subject of what the role of the United Planets should be. While President Brande has made a strong case for a firmer hand, Dawnstar feels that power will only corrupt. “It is the only lesson history has taught us over and over.”