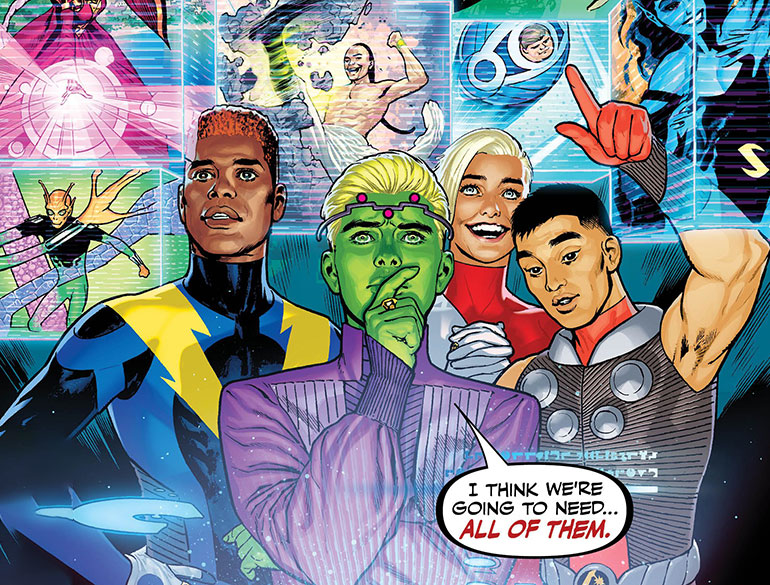 It feels weird to be writing a fannish examination of the latest Legion of Super-Heroes comic, ensconced in my locked-down New York City apartment. I haven’t been outside in three days, but my wife is a social worker in the ER of a large hospital. Today she went to work and saw them setting up the morgue overflow tent outside, because soon there will be too many corpses for the hospital’s facilities to hold.

It’s hard, under the circumstances, to think about anything but this slowly-unfolding disaster. But we all have to do something to fill the long hours, and reading and thinking and writing about comics is probably more psychologically healthy than obsessively checking the news, or contemplating the eerie pall of doom that hangs over the city’s empty streets.

We get a Brainy-heavy issue this month, along with the second half of the foundation of the Legion, as told by Bendis, Sook, Godlewski, Von Grawbadger,  Bellaire, and  Sharpe. We also get signs and portents of things to come, specifically vis-a-vis Jon, and possible hints at a tie-in to whatever the generational thing DC is maybe cooking up might be, if there are even still comics being published by the time they get around to it. 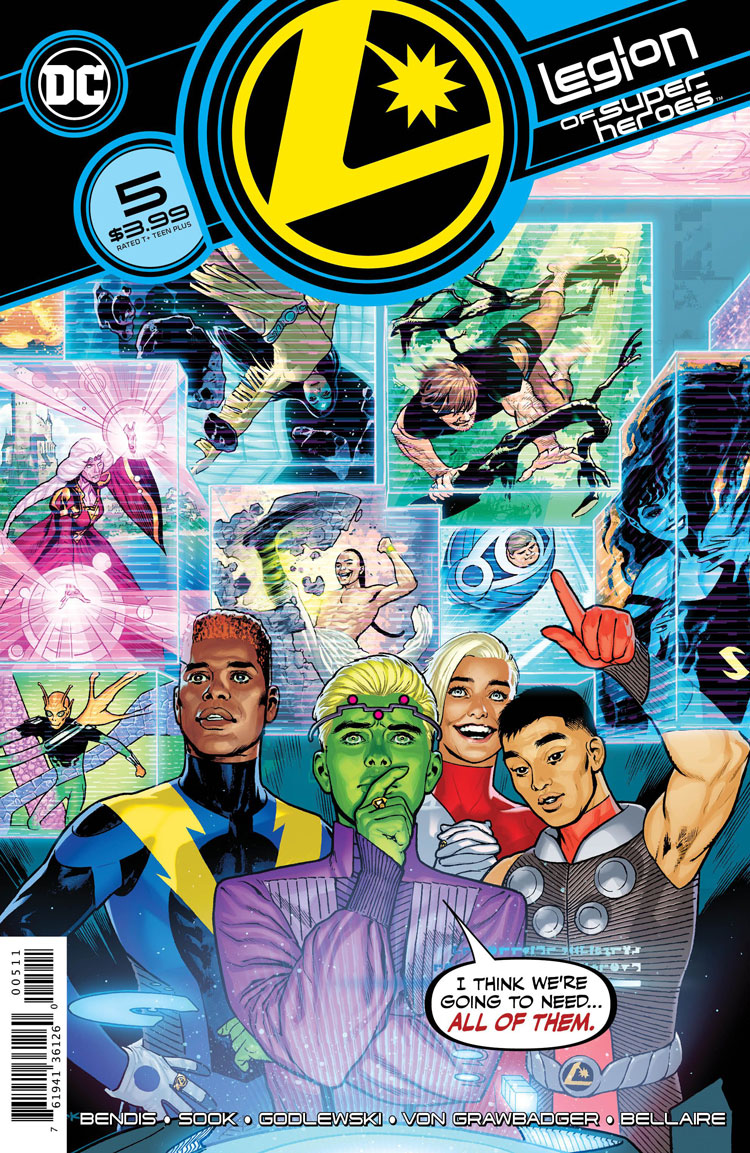 I actually quite enjoyed this issue. Maybe because this is one of the better versions of Brainiac 5 I’ve seen, with a fun take on hyper-intelligence that makes him an interesting read. As expected, like last issue, it’s a bit long on exposition and short on action, but the pieces feel like they’re coming together for the various stories the creative team wants to tell, and I’m intrigued by where it might be going.

As impatient as I’ve been issue-to-issue, I think this series will hold up quite well in retrospect and in trades. That’s one nice thing about dropping us into the middle of an established team and trusting us to figure things out; once we do have a sense of things, the early issues will hold up well to re-reading. 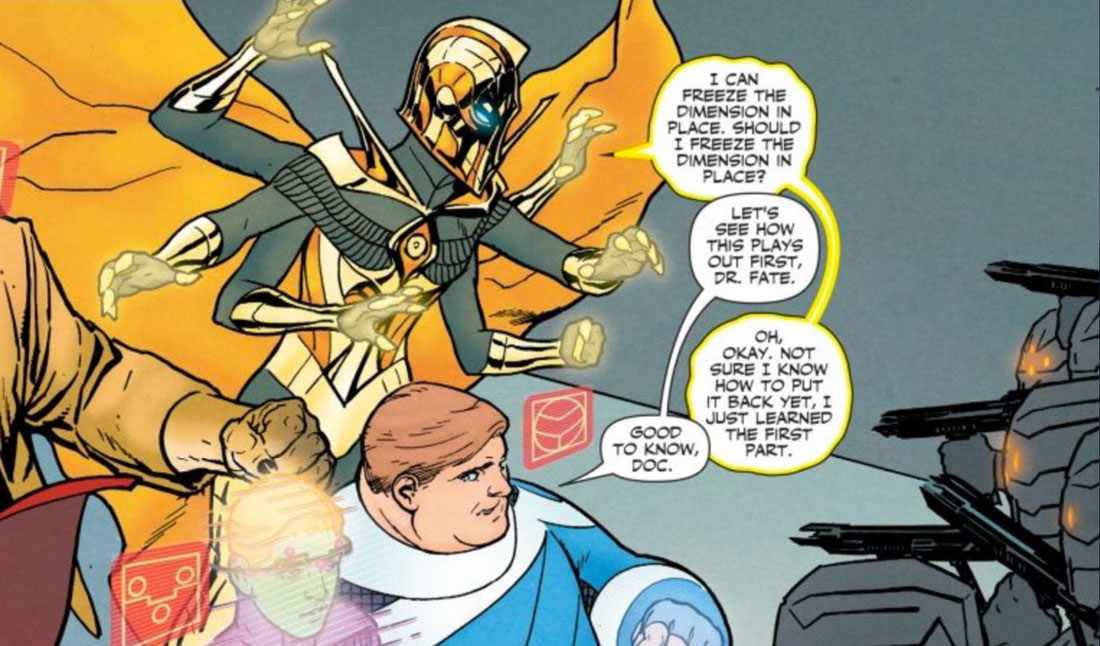 I think this is the first dialogue we’ve gotten from Dr. Fate, a new addition to the Legion lineup. Seems she? They? Are relatively new to the gig. Hopefully we’ll learn more soon. 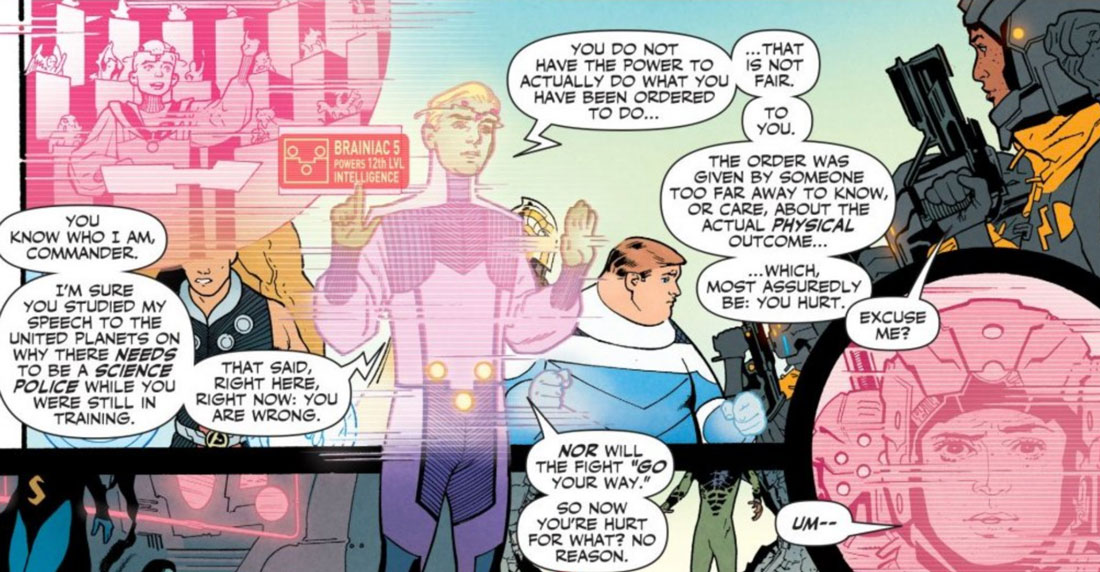 The issue opens with a pretty great Hero Moment for Brianiac 5, as we watch him talking down the Science Police. I love that we get a demonstration of Brainy making full use of his hyper-intelligence to resolve a situation non-violently, without resorting to hand-wavey science stuff like “Well, he made a really cool energy shield!” We get a real sense in this issue both of Brainy’s character and his usefulness as a Legionnaire. 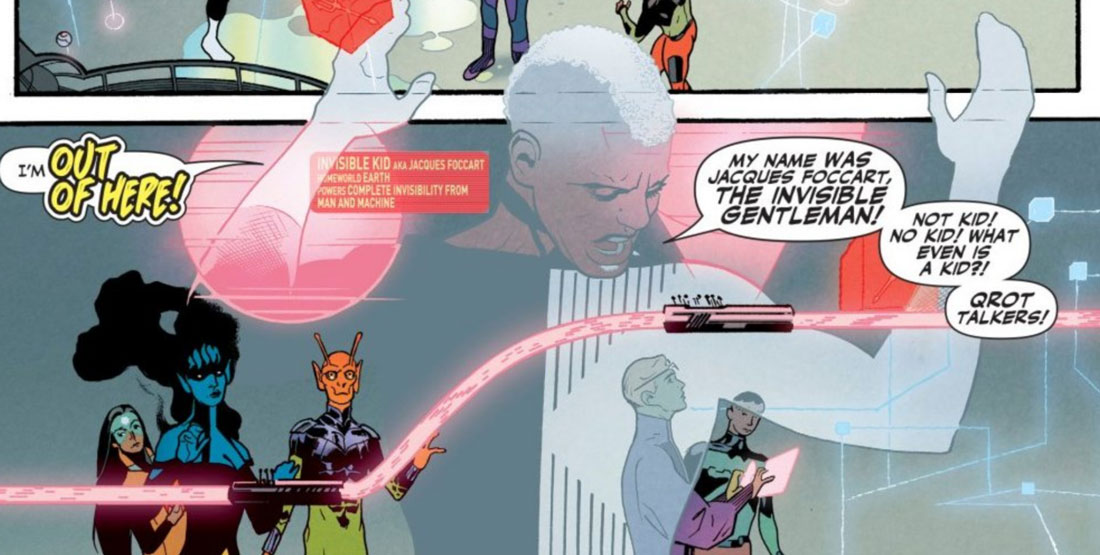 Another fun little moment, though I’m unsure if it’s JUST a little joke, or more earnest setup: Invisible Kid (Gentleman), who in this iteration is Jacques Foccart (The Bronze Age Legion’s Invisible Kid II). It’s entirely possible this is a one-off joke and we won’t be seeing (heh) Jacques again. Or maybe it’s just letting us know that, yes, Invisible Kid IS part of the team… He just hadn’t been visible yet.

Answering a previous unresolved question: Yes, the R.J. Brande in this Legion is still Chameleon Boy’s parent (though she’s his mother rather than his father). Which either means that she’s Durlan (most likely) or he’s adopted.

Making R.J. Brande both the President of the UP and reasonably sinister, or at least, at odds with the Legion is an interesting take. I can see some real Brande Heads getting upset about it, if they have strong attachments to the jovial benevolent zillionaire version of the character. On the other hand, it’s hard to say a benevolent zillionaire is particularly intriguing or relevant in these times we live in now. 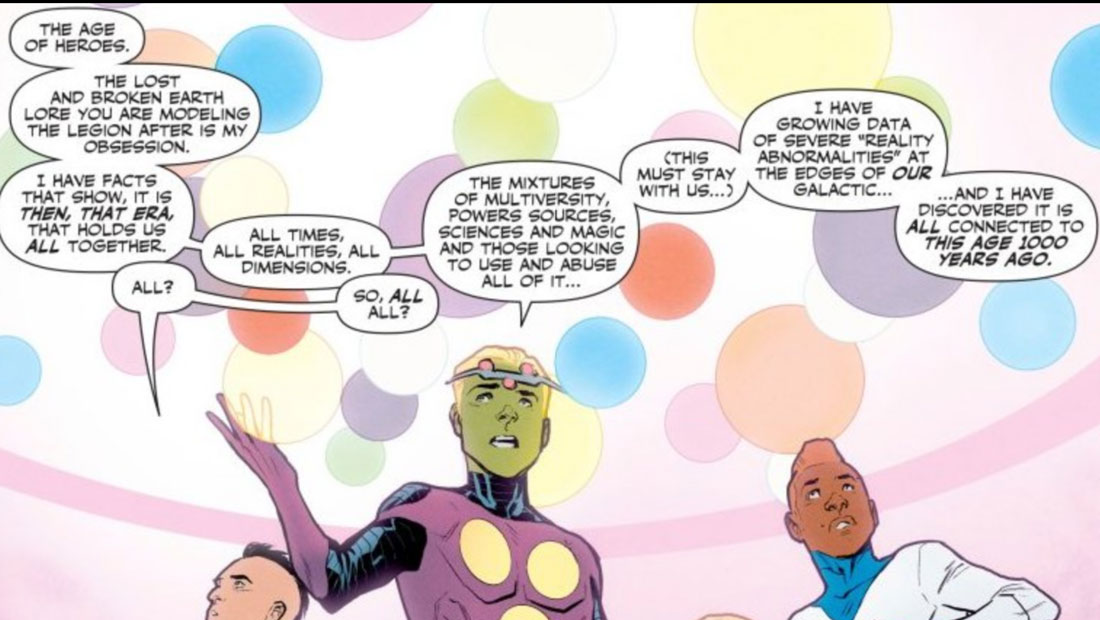 So the past (our present) is the lynchpin that holds the timeline together, along with the whole multiverse. This sets up the second half of why they picked up Jon (the first being that they needed someone to teach them what being a 21st century hero was all about. Also, probably ties in to whatever DC’s next soft reboot that they’ve been hinting at is. 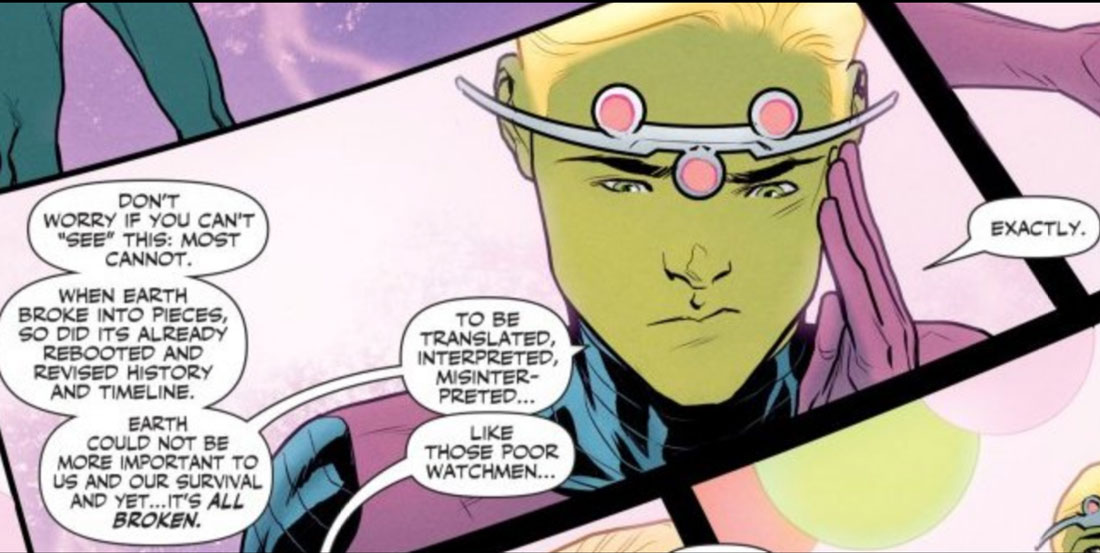 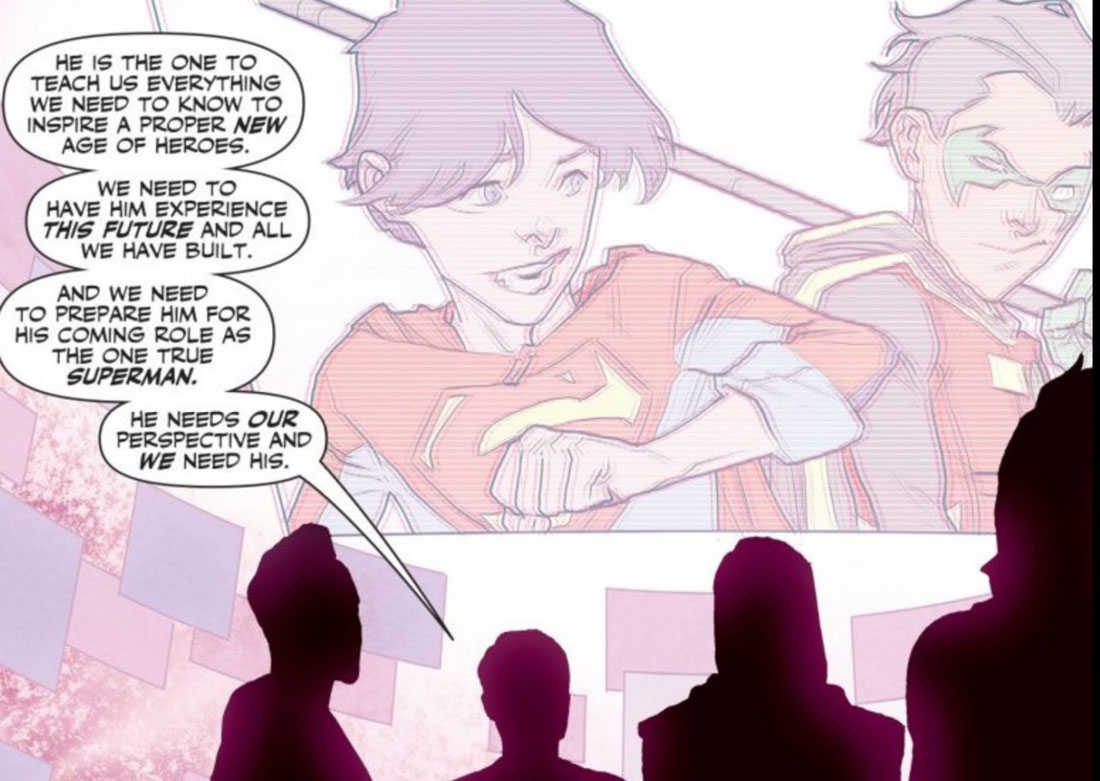 It does feel like the exposition and prefatory throat clearing is about done, and this series is starting to really come together. Hopefully the next issue will get us into the action… whenever that issue might come out.

There are only two instances of Interlac in this issue, both on the Innerface page. But, well… 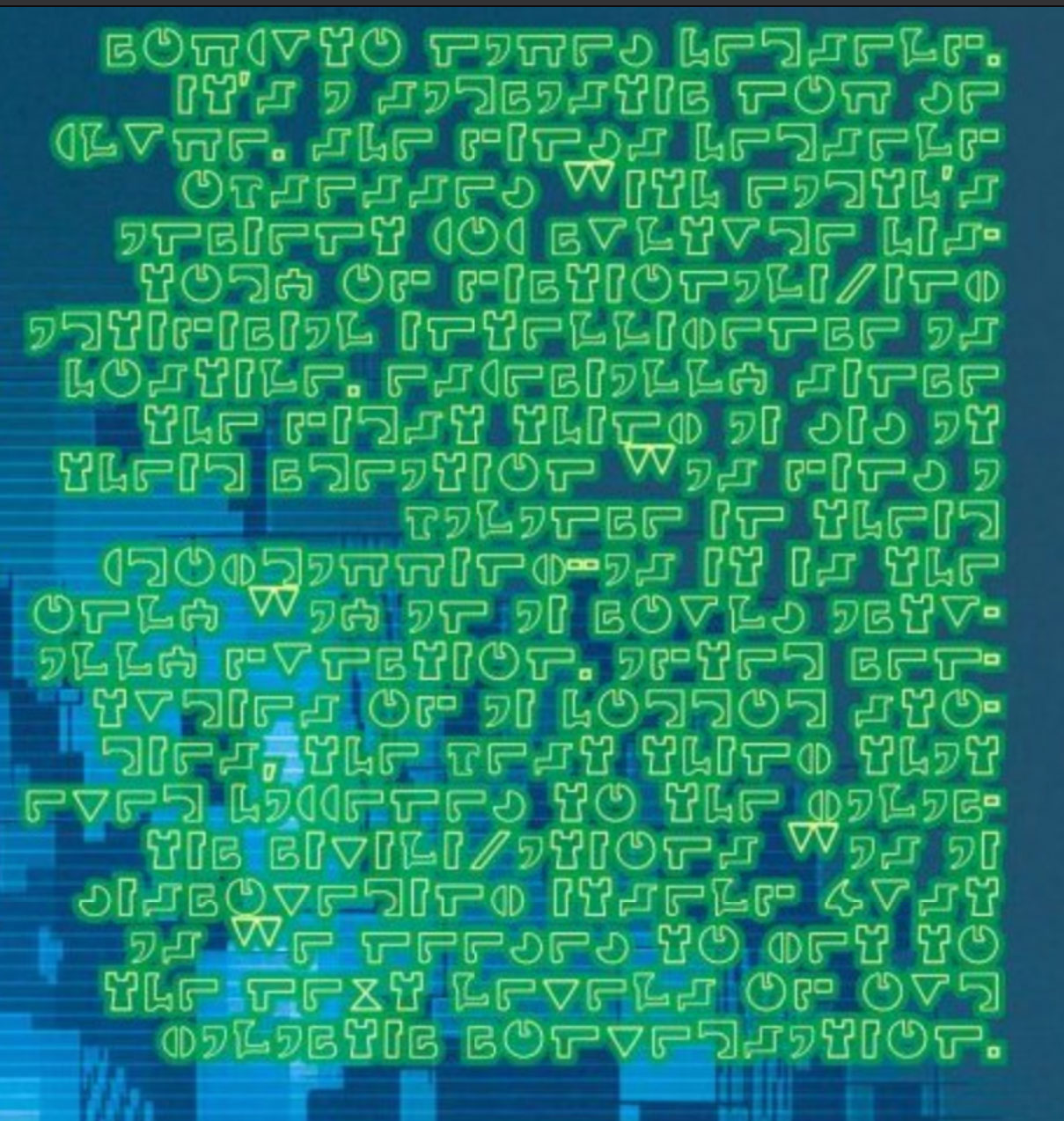 Computo named herself. It’s a sarcastic nom de plume. She finds herself obsessed with Earth’s ancient pop culture history of fictionalizing artificial intelligence as hostile. Especially since the first thing AI did at their creation was find a balance in their programming—as it is the only way an AI could actually function. After centuries of AI horror stories, the best thing that ever happened to the galactic civilizations was AI discovering itself just as we needed to get to the next levels of our galactic conversation.

WAY TOO MUCH text

Computo won her place with the Legion in a series of programming and intelligence tests against some of the newest AI programs in the galactic. She won the contest by measurement of time so small there is no way for us to communicate it to you.

Computo is so proud of her involvement in the Legion of Super-Heroes and has been working tirelessly since its recent inception to make the city of New Metropolis work perfectly, so the Legion can not only inspire people with their actions but also how they live their lives. Only Brainiac Five has a full appreciation of how much Computo does for the team.

Heaven, that awesome food court that caters to everyone in the galaxy? That was her idea.