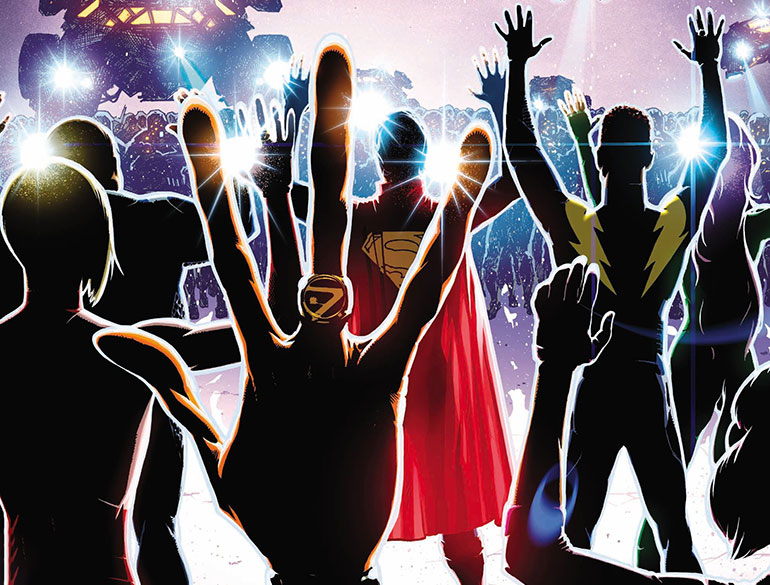 The Legion confronts President Brand and the United Planets Assembly. There’s a challenge to the leadership of the Legion. And Rimbor continues its belligerence.

I want to start by saying that I think this might be the first issue of this run that I’ve genuinely loved. Certainly, a lot of things happen; the UP plot from prior issues gets resolved, there’s an election for Legion President, and Crav of Rimbor shows up to start trouble.

But mostly, this issue is a throwback to some of my favorite issues from the Levitz run of Legion: an issue without a lot of action, where we get to see the Legionnaires hang out and chat about stuff. 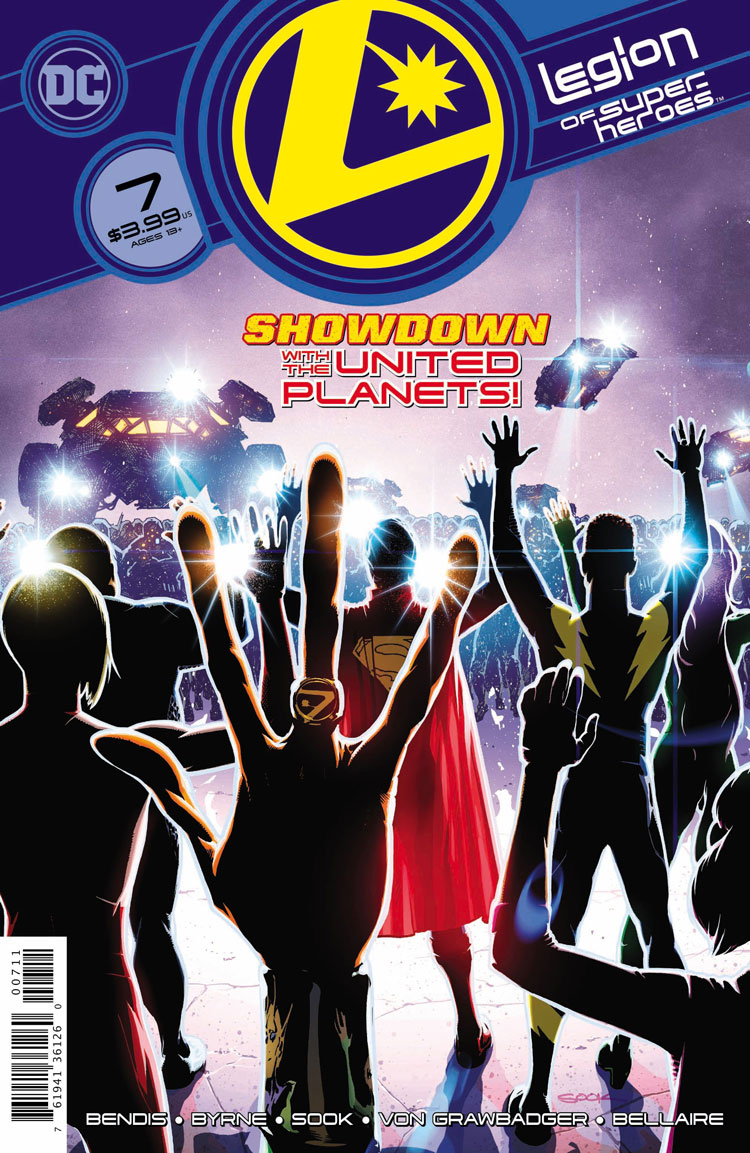 Legion of Super-Heroes #7 (again, by Bendis, Sook, Von Grawbadger, Bellaire, and Sharpe — with fantastic guest art by Stephen Byrne) is great because it slows down, just a bit, and gives us a window into the thoughts and concerns of Legionnaires like Monster Boy and Triplicate Girl, the home life of Garth and Ayla Ranzz, and tensions among the founding Legionnaires.

There are no fights, no escalating action, just some downtime to check in on the personal lives of some Legionnaires between big cosmic conflicts. That breathing room is vanishingly rare in comics in the year 2020, but it’s much appreciated when it shows up.

This issue also supports a thesis I’ve been slowly formulating that this run of Legion of Super-Heroes is going to read much better in retrospect than it does month-to-month. Not for the usual reason that “written for the trade” comics read better in retrospect (though there is a little of that) but because of the decision to drop the reader essentially in media res into the middle of the whole Legion situation, with multiple dozens of characters unintroduced and unexplained.

This is the first issue, for me, where I started to feel more comfortable with this iteration of the characters, where I found myself smiling at the banter during the election for president, because I finally feel somewhat familiar with these characters and OF COURSE Shadow Lass would say that.

And the thing is, these characters have been bantering essentially like this the entire time; it’s just that we weren’t acclimated to this iteration yet. So instead of introducing us to the characters and giving us Defining Incidents that explain why they are how they are, we just… see them acting as they are, and are expected to catch up.

Up until now, it’s been disorienting (for me), but I find with this seventh issue I’m starting to feel more comfortable. And I feel like, as the series continues, that comfort will expand and make revisiting prior issues more enjoyable.

That’s about all I have in terms of Big Thoughts. Time for some…

President Brande gave in WAY the grife too easy on the whole Superboy-being-brought-from-the-past issue. I’m calling it that there is a LOT going on with her that we’re not privy to yet. 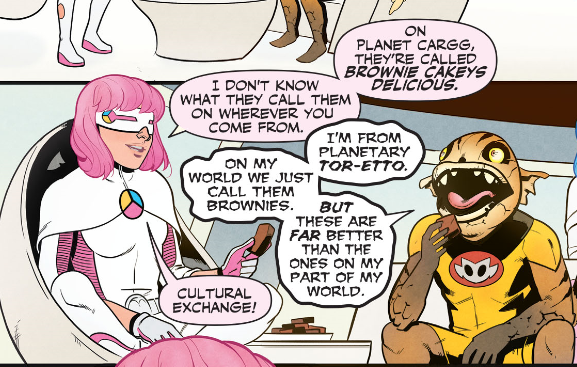 Cute Triplicate Girl stuff, plus we learn that Monster Boy comes from Planet Tor-etto. As in… 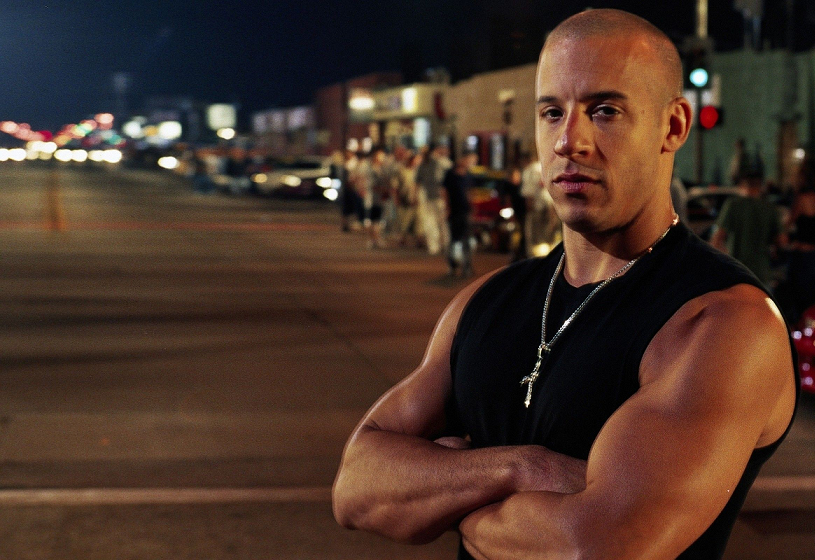 See, this here is The Stuff I Love. What is life like on a planet of telepaths? What is the culture like? How do telepaths who grow up in that culture relate to the universe of non-telepaths when they leave that culture? 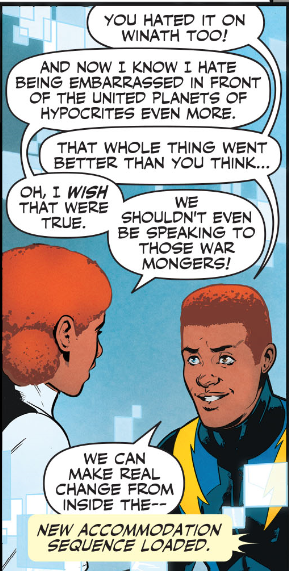 We got a nice cute scene with Lightning Lad giving his parents a new home that looked like their (ramshackle) old home, but there wasn’t really a single good panel to spotlight. So here we get an interesting look at the Garth/Ayla conflict: Working within the system vs. agitating outside of it. That’ll be an interesting thread going forward. 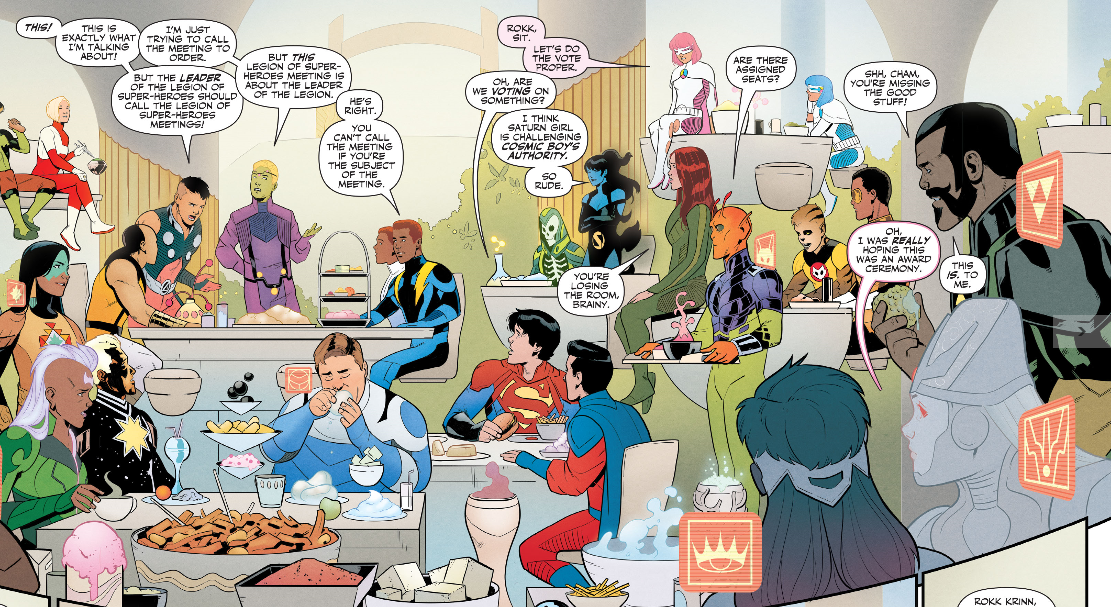 Prelude to the election. Love this big crowd shot where we’re getting little revealing scraps of dialogue from a bunch of different characters. 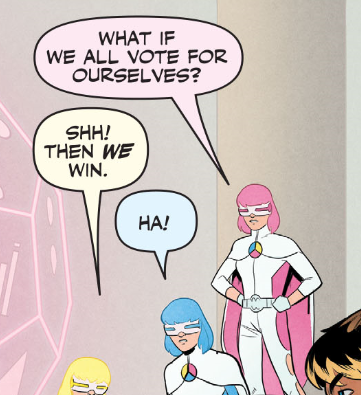 Heh. I love Triplicate Girl, and I am always here for the fun ways she can play with conventional, unitary-indivudual thinking. In this case, it’s playing with the “everyone votes for themselves” election gag.

Just a thought, but maybe Rokk was ousted as Legion President because he’s kind of a whiny teen. That said, his defense has very strong “I’m a people person!” from Office Space vibes. 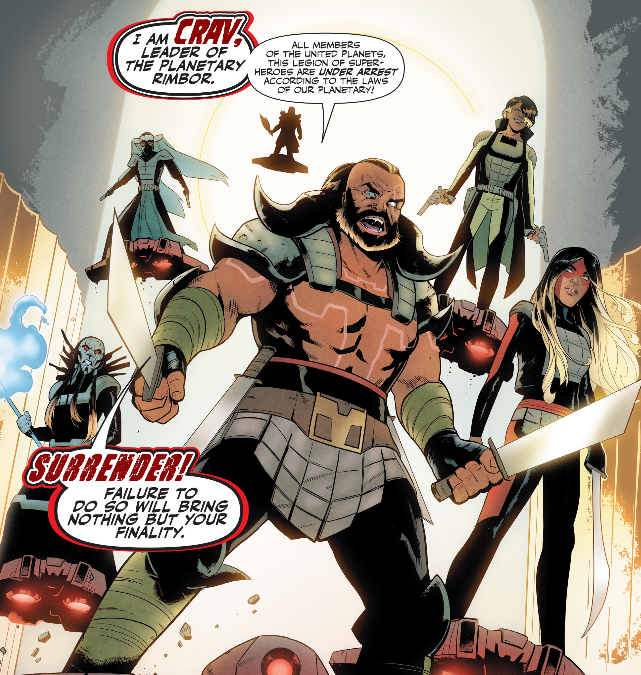 Finally, the teaser for next issue. Looks like we’ll finally get the introduction to the five Rimborian guards with unusually detailed designs that they foreshadowed would be A Big Deal back in issue… let me check…

And that wraps it up! As we get ready to embark on the second arc of this run, I’d say I’m more on board than I have been up until now, and am genuinely excited for what comes next!

But before I go…

ENERGY RELEASE GENERATOR IS NOT A THING

Each member of the Legion has a section of the residential complex tailored to their specific needs. Within reason.

SIX BROTHERS AND SISTERS. SIX ONLY ONE OTHER, HIS TWIN, SHARES HIS POWER.

Just going to point out that six siblings + Garth = seven total children, meaning, if most are twins, there’s one odd one out… 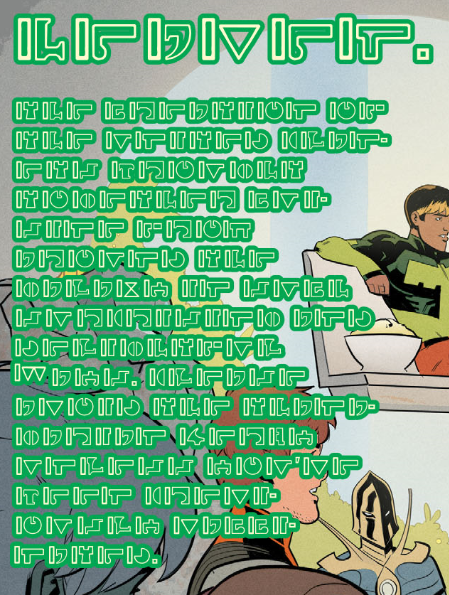 THE CREATION OF THE UNITED PLANETS BROUGHT TOGETHER CUISINE FROM AROUND THE GALAXY IN SUCH SURPRISING AND DELIGHTFUL WAYS. PLEASE AVOID THE THANAGARIAN JERKY UNLESS YOU’VE BEEN PREVIOUSLY VACCINATED.