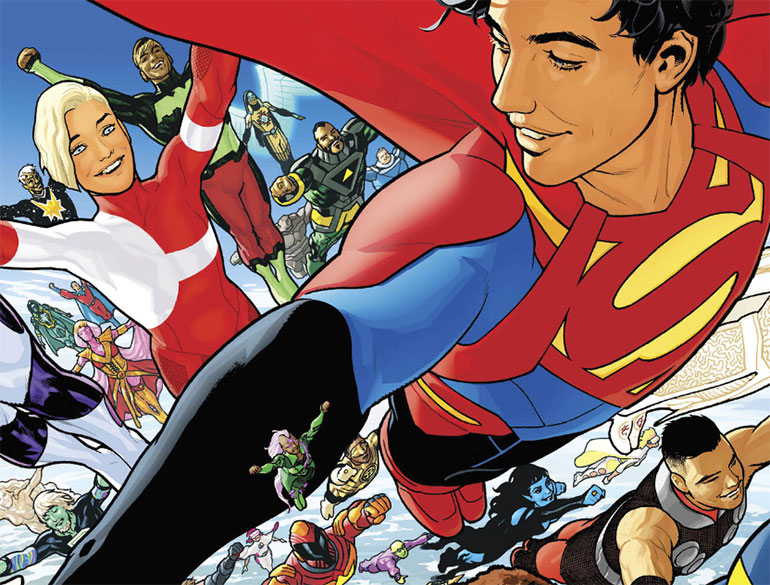 Sorry for the delay; I’ve been busy the last month getting married. But now I’m back and ready to finally dive into the first official issue of the new Legion of Super-Heroes! 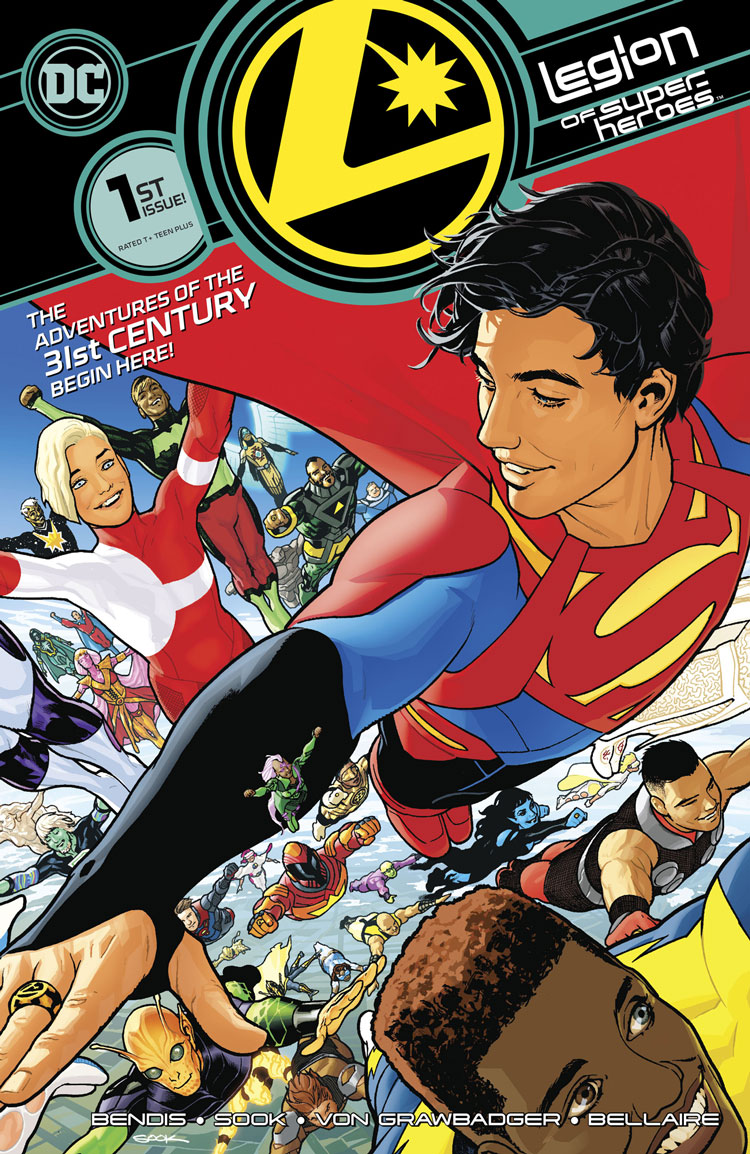 This issue opens on a chase, as Ultra Boy, Star Boy, Wildfire, and Karate Kid run down members of the Horraz (which might be an alien species or might be an organization or gang, but which are new to this version of the Legion) to the Planet Gotham section of New Earth. The Horraz are attempting to deliver an artifact to their employer, Mordru, here described as a “demon gangster.”

The new Mordru, guest appearance by the new Ultra Boy

So, already we’re seeing a bunch of new concepts and fresh spins on old characters. New Earth we’ll get back to, as it’s elaborated upon more later in the issue. The Horraz seem like they’ll take center stage next issue. What’s most interesting here is Mordru. Mordru is one of of the Legion’s major foes, rivaled only by the Time Trapper in power and importance to Legion history. Here he looks a lot different than his typical depiction: 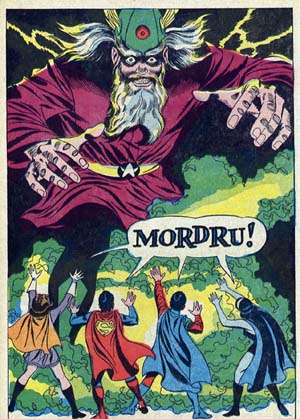 This is certainly a different take, a bit less cheesy (the old Mordru was a wild-eyed, bearded wizard wearing a boxy, winged hat, who had a tendency to physically grow in size in proportion to his power level), but perhaps, also, a bit less intimidating? I’ll admit I was a bit surprised to see Mordru introduced on page 5 of the first issue of the relaunched Legion. And, moreover, to see him punched out by Ultra Boy on page 7:

In the past, Mordru has been a galactic-scale threat, the sort of adversary that’s more than a match for the entire Legion combined, who only gets defeated through a mixture of luck and cleverness. As such, this felt a bit underwhelming.

That said: We’ve seen Galactic Threat Mordru many times before. That type of all-singing, all-dancing, all-hands-on-deck Legion vs. Mordru story, while viscerally thrilling, is old hat. Moreover, there’s every indication that this isn’t the last we’ll be seeing of Mordru, and that the threat he presents will only grow. This seems like a Mordru with a more elaborate plot than the more brute-force galaxy conqueror we’ve seen in the past.

It’s a very different take on Mordru. I have some doubts about it, but I’m willing to extend the good will to see where it goes. Opening with such a different take on such a prominent Legion villain is certainly a daring move, and we’ll see if it pays off.

There is something I found a little more worrisome, though…

I’d like to talk a little about voice, and why this first issue (plus the issues that led into it) has me worried about it.

Whenever I read Harlan Ellison, I find myself remarking on how skilled Harlan Ellison was at writing characters who all basically talk like Harlan Ellison. Similarly, whenever I read a Brian Michael Bendis comic, I find a universe populated by characters who all basically sound like how I assume Brian Michael Bendis sounds: Clever, wry, jokesy-snarky, a touch self-effacing. It’s a good voice, it has personality, it’s winning and crowd-pleasing (See, for example, roughly half the male leads in the Marvel Cinematic Universe).

The problem is, it’s just one voice, and the weakness of that lack of vocal diversity is particularly striking in Legion of Super-Heroes. In a book with one main character and a handful or supporting characters, like Superman or Action, similarity of voice can be overlooked. In a team book with a half-dozen leads, like Young Justice, it’s a persistent drag. In an ensemble book like Legion, with multiple dozens of main characters, it’s potentially deadly.

When you’re introducing as many characters as Legion has in limited page real estate, voice can be a great way to demonstrate personality, to deepen characterization in a few word bubbles. In this first issue, while the dialogue is certainly entertaining enough, you come away without much sense of differing personalities. Everyone kinda sounds like most Bendis characters do.

Again, we’ll have to wait and see where things go. We’ve only had a chance to hear from a few characters thus far, so perhaps we’ll see more distinction in personality as different combinations of legionnaires are presented.

The bulk of the remainder of the issues concerns Superboy’s introduction to the world of the Thirty-First Century, with a particular emphasis on New Earth, the cosmic mega-structure that appears to comprise a dozen or so preserved cities from Earth’s past. 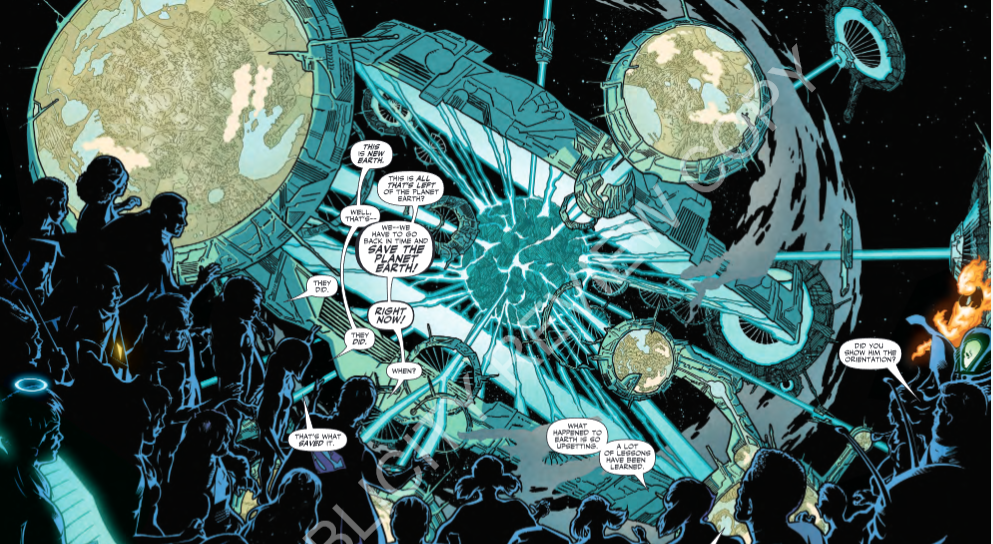 So this is a pretty cool science fiction idea, of a piece with Ringworld, or a Dyson Sphere, or the Halos, from the video game series Halo. What’s hinted at is that various parts of Earth have been pulled from the planet’s past, before it was destroyed, and enclosed in a futuristic, interconnected mega-structure. It serves to make an interesting setting out of New Earth, where in the past Thirty-First Century Earth was, perhaps, a tad boring: basically like Twentieth Century Earth, but more futuristic. Given the time and splash pages spent setting it up, it seems like New Earth and its nuances are going to be a pretty important subject moving forward.

As far as character dynamics, Superboy is clever, engaging, and fun, and serves as our POV character as he comes to grips with the world of tomorrow. And… other characters make remarks, but other than Saturn Girl we don’t here much from any one character in particular. We do get a very brief appearance by Rose, of Rose and Thorn fame, who was our guide through the Millennium mini-series; presumably she’ll be the entry point for more plot moving forward.

All told, Legion of Super-Heroes #1 certainly sets up plots, both short-term and long-term, and establishes its setting. The sheer number of characters, and the similarity of their voices, makes the characterization feel a bit light so far. Really, the greatest thing about this issue are the bevy of double-page splashes, which provide a fantastic showcase for Sook, Von Grawbadger, and Bellaire’s mastery. I absolutely have concerns, but there’s enough of interest here to keep me engaged.

What are your thoughts on this first official issue of the new Legion of Super-Heroes?