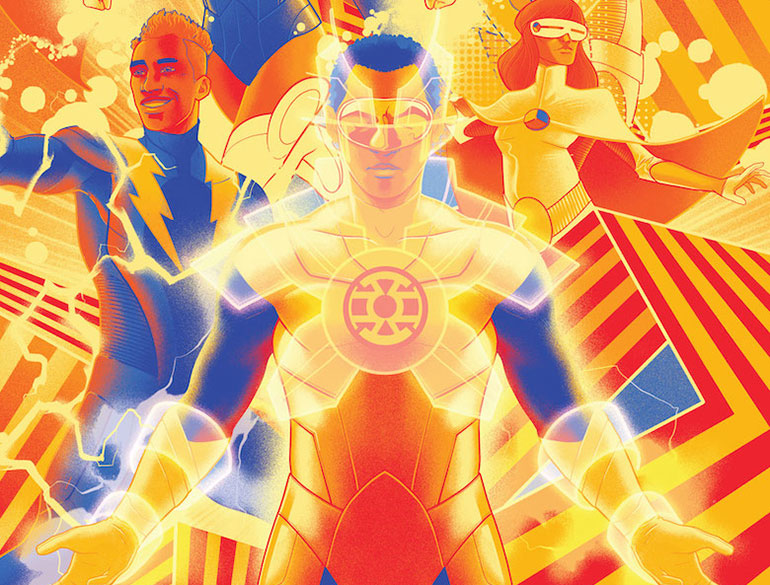 Everything comes to a head in what really feels like a final issue, at least for this creative team of Bendis, Sook, Von Grawbadger, Bellaire, and Sharpe.

Now, I know this isn’t the LAST last issue, there’s Future State: Legion of Super-Heroes coming out… Geez, next week. But this issue ties up all the series’ extant threads, both plot and character, with an efficiency I’ve seldom seen in a 22-page comic. I’ll have more in the Bits of Business segment, but it really does set all those dangling plot points up and knock them down quickly, often in single panels.

Based on this issue, and the state of the next few months of solicitations, it SEEMS as though the Bendis-penned Legion of Super-heroes is wrapping with Future State Legion. It’s possible the Legion is just plain cancelled, or it could be (given that DC seems to be slowly relaunching its line over the course of the next few months) that it’s going to relaunch with a new team shortly. Regardless, this issue feels like Bendis clearing the deck so whoever comes next on Legion, whenever that may be, has a clean slate to work with. 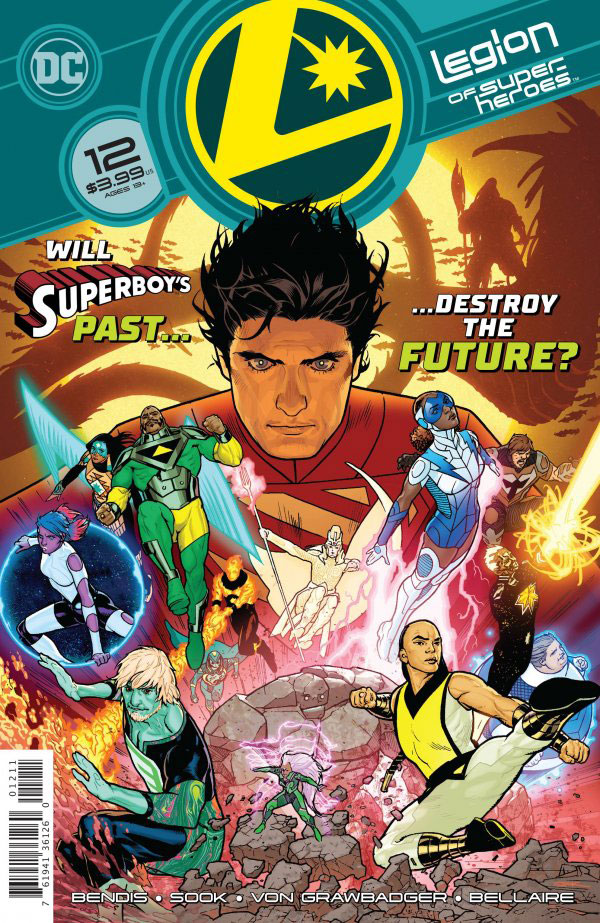 I can’t say it’s not a bit disappointing to see several years of build-up dispatched so quickly, not to mention the years of waiting that preceded it. On the other hand, I would actually classify this as one of the more satisfying endings for a Legion series. For as compressed as it is, it doesn’t leave much of anything dangling that I could see, and the resolutions, if a bit pat, were at least in-character and on-brand.

Now, as for what happens.

The Legionnaires converge on Daxam where they have an all-singing, all-dancing, all-fighting two-page-splashing Legion brawl against Rogol Zaar, Mordru, and his army of Horraz. Ryan Sook’s art is stunning to the last and we’re treated to a battle that is both complex and nuanced.

I have to say, as someone who’s seen a lot of all-out Legion battles, Sook and Bendis do an amazing job keeping the characters distinct and illustrating character through action even as the splashes and panels are crowded with sometimes dozens of characters at a time. The staging is such that just about every Legionnaire gets a little bit of the spotlight, and the battle itself has clear action and feels suitably epic.

The economy of space in this issue is truly remarkable; I’ve seen unplanned final issues in the past, but this one manages to tell a really interesting battle story while simultaneously wrapping up the prior 12 issues (plus the two issue mini-series). In any case, it’s a spoiler but, as you’d expect, Rogol Zaar is defeated and banished to the Phantom Zone while Mordru is removed from this plane of existence.

Though, is that really to be expected? I suppose it’s worth remarking that this is actually one of the most upbeat Legion endings in the team’s history, considering that about half of all Legion series have ended with the team disbanded and the universe destroyed to a greater or lesser degree. It’s fun, befitting the fun tone this series has taken all along. 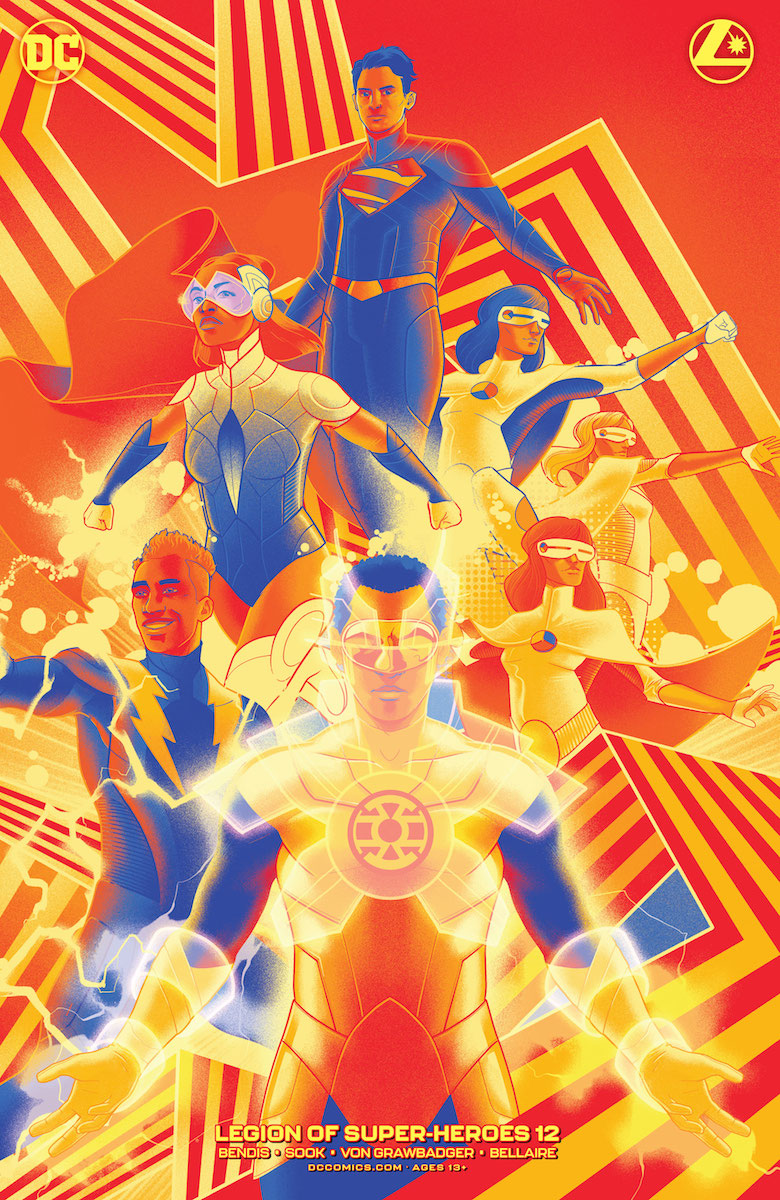 I suppose I’ll have more thoughts next week. when I cover Future State Legion and do a post-mortem on the Bendis Legion.

For now, though: I liked this issue, I liked this ending, and I came to really like this version of the Legion. I hope we see more of it. 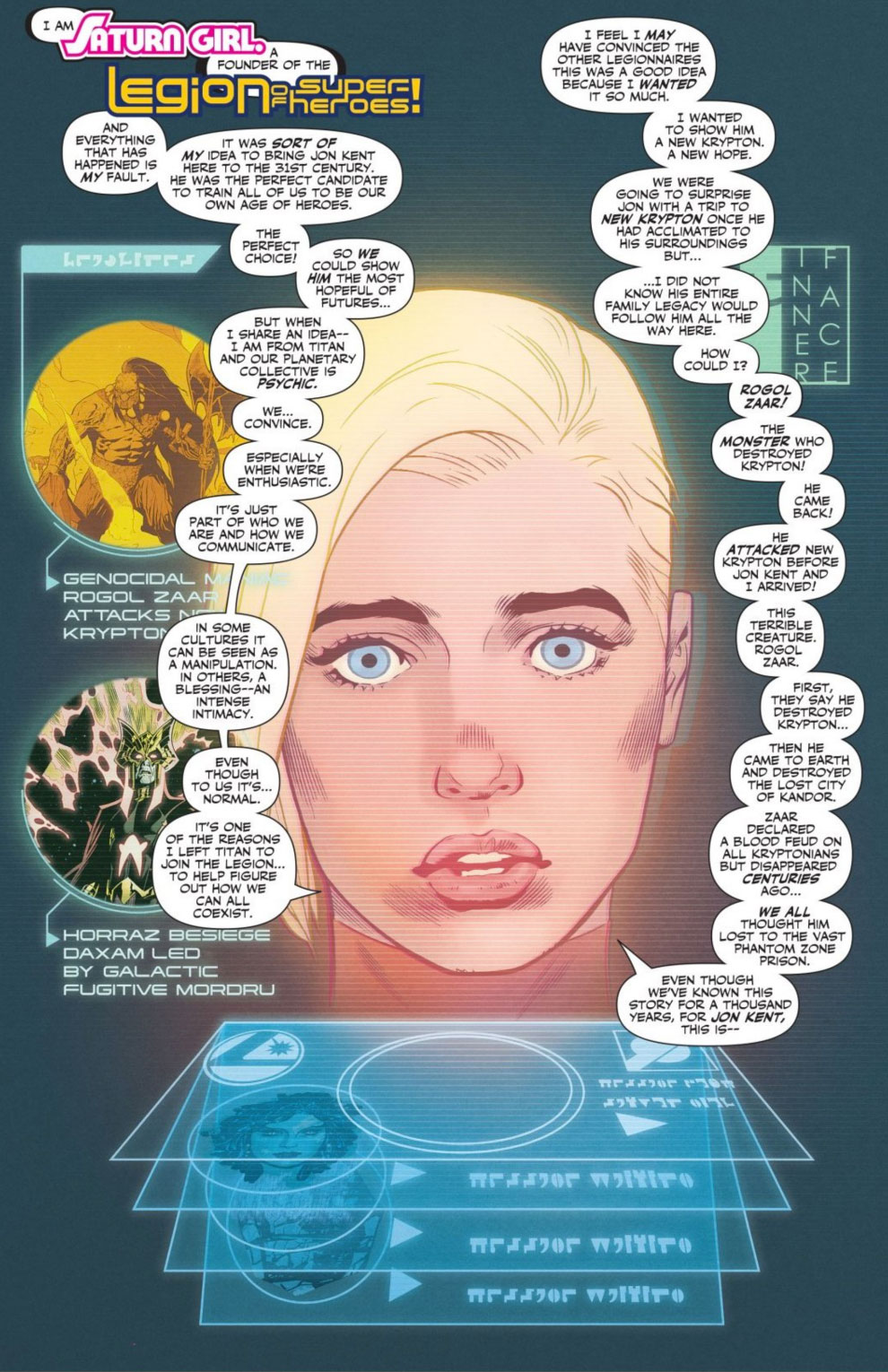 So this is interesting, and also puts a rather disturbing spin on her relationship with Jon. 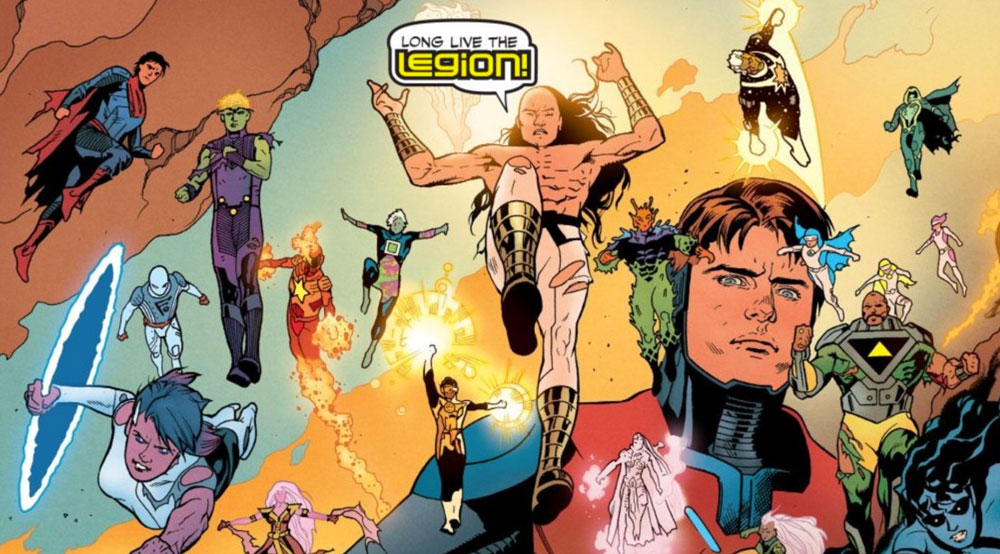 So, Brainiac knew White Witch’s secret the whole time, and we get a nice little climactic showdown between Witch and Mordru.

This is what I mean when I say we even get resolutions to character beats. A little button on the “Light Lass is a revolutionary who’s conflicted about working inside the system” subplot. 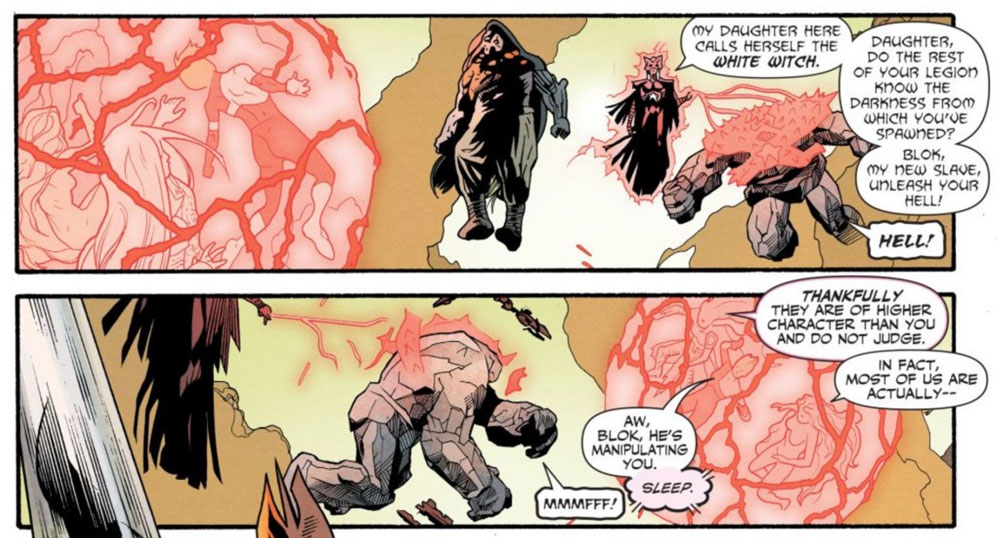 And hey, Mordru picked up Blok in space, and made him his slave! For a little bit. No Legionnaire left behind! See what I mean about efficiency? Witch-Mordru confrontation AND Blok’s Not Dead, all taken care of in a pair of small panels!

Okay, this is the panel that simultaneously makes me the most satisfied AND the most upset. Satisfied, because from the first time I saw the new design of Triplicate Girl I had it pegged that there was something going on with her being Cyan, Magenta, and Yellow, and that there wasn’t a Black, to make the fourth of the CMYK color printing tetralog.

Here we see black-colored Triplicate Girl, confirming there was something there, and ALSO see her splitting to further colors of the spectrum. Which leads me to think there was cool stuff to learn about Triplicate Girl and her background and powers that we just didn’t quite have time to get to. Sad.

Is Mordru’s claim that he’s already had his revenge just cheap talk from a defeated villain? Or a hook for future adventures, whether in Future State or for some new creative team to take up? Only time will tell. 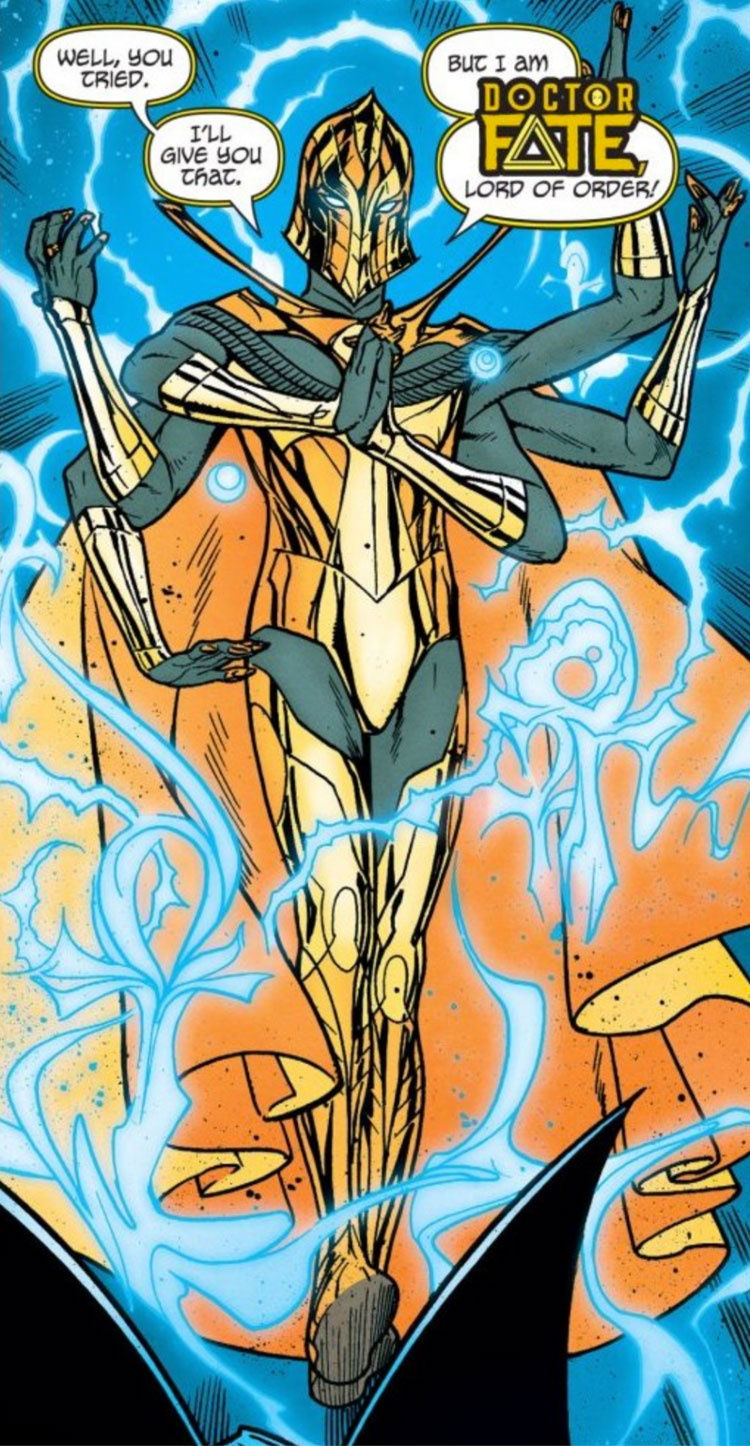 On the one hand, yay, Doctor Fate didn’t die! On the other hand, the track record of Doctors Fate not meeting horrible ends is fairly bleak, so I’m not sure bearing the Helmet of Nabu necessarily guarantees you wouldn’t face your ultimate end getting disintegrated out of nowhere.

Nonetheless, I will add that I called Doctor Fate just being vanished to another dimension rather than full-on disintegrating.

… Also, I THINK this means no Legionnaires died in this whole run. Elsewhere there’s a brief check-in on Invisible Gentleman. 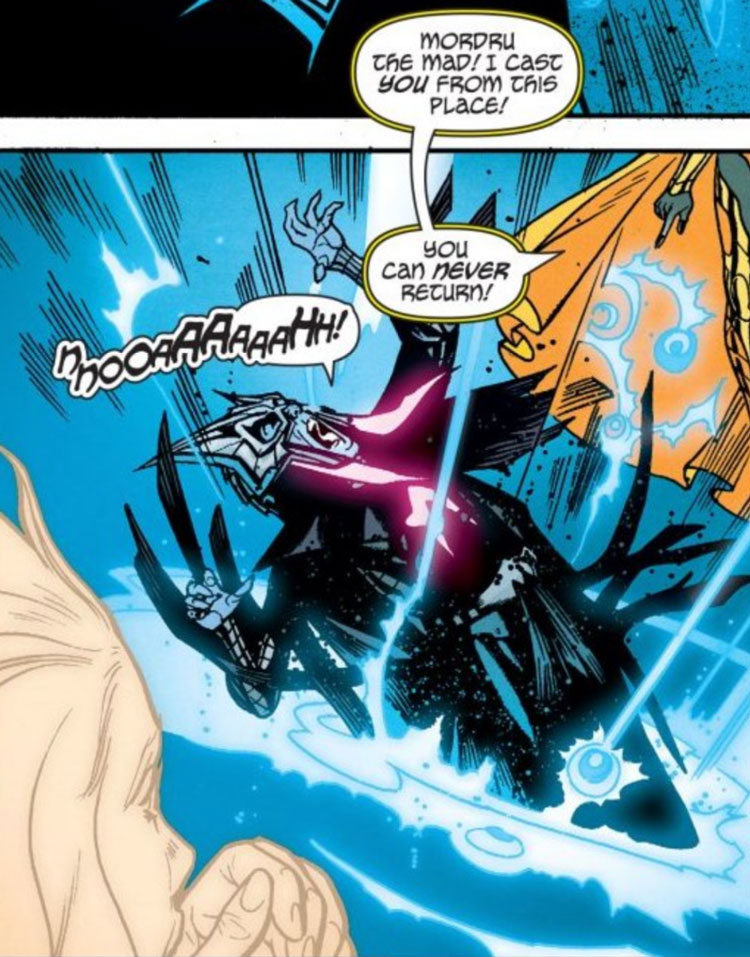 Bam. Mordru plot thread resolved. On the one hand it feels a bit pat, and perhaps short-sighted, to eliminate a villain like Mordru forever. On the other hand… It’s not like the next team can’t bring him back as easily as he was banished. 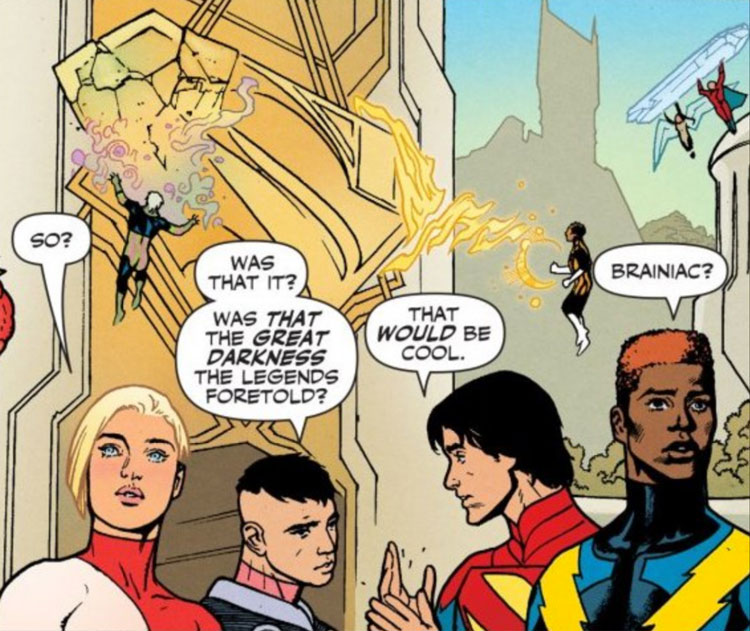 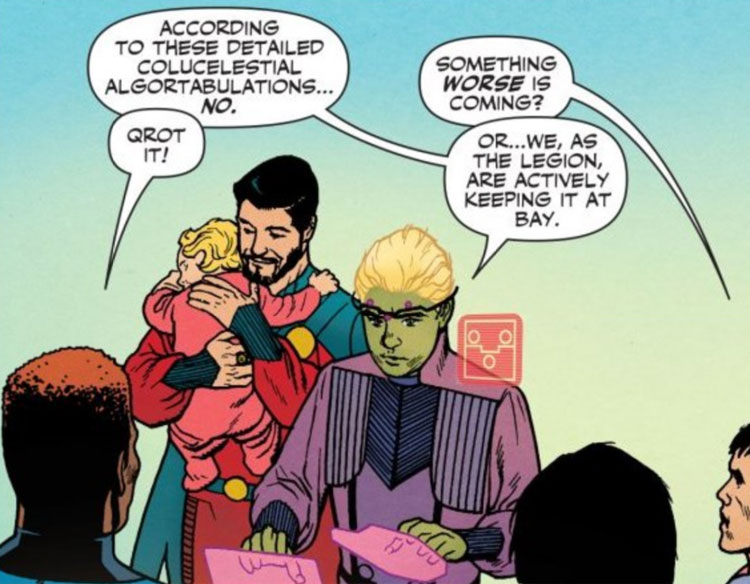 This feels like a nice hedge. The Great Darkness COULD be a looming thread, if the next creative team wants it to be… Or it could be waved off as “The Legion is doing such a good job it’s not a threat any more.” 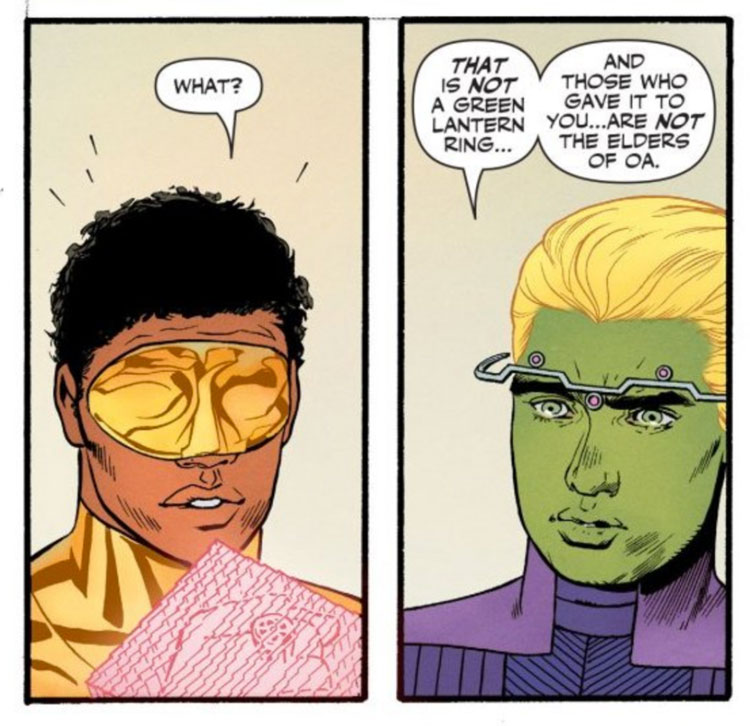 Finally, we do have one last bit of unresolved business: What’s up with Green Lantern and his ring? That promises to be resolved in Future State.

First, though, we get a final full-cast celebration splash page, featuring a few cameos… 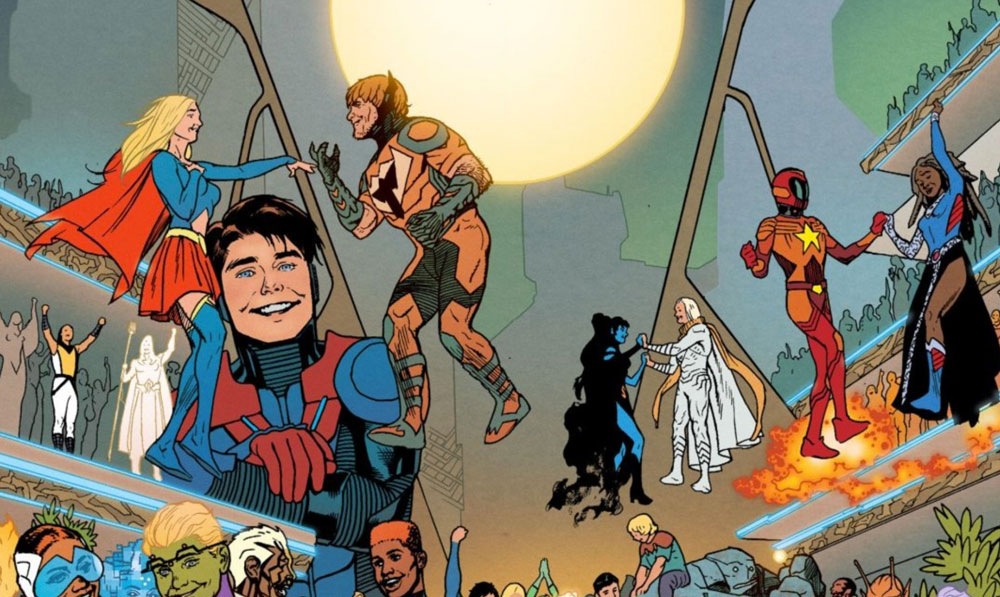 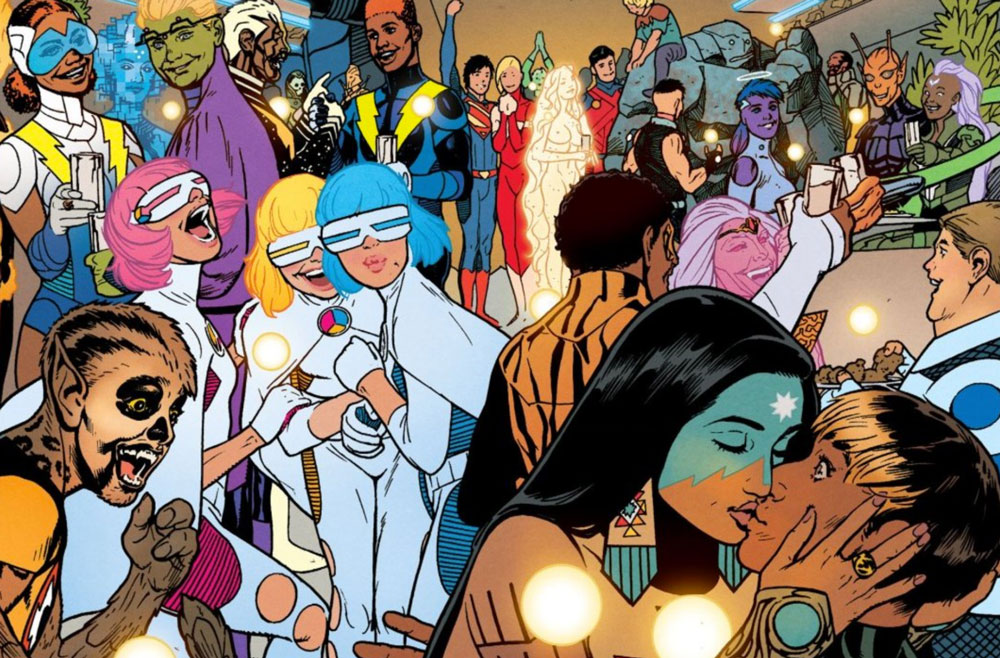 And that about wraps it up!

See you next time for the maybe final issues, Future State: Legion of Super-Heroes #1-2!

… No Interlac in this issue! School’s out!