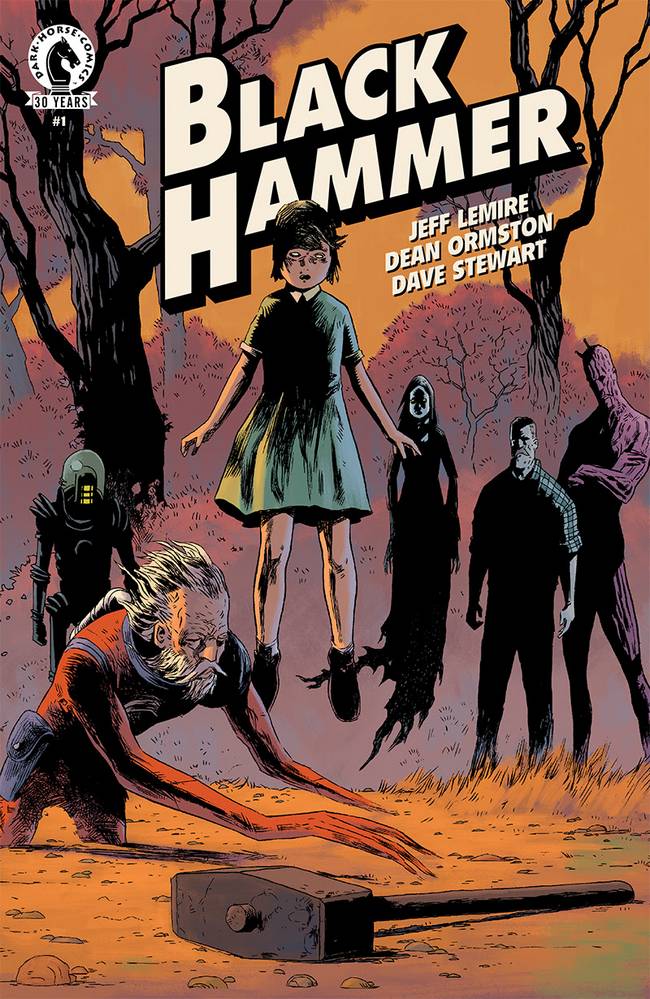 From the prodigious brain of Lemire (Descender, Sweet Tooth, Essex County, A.D.: After Death, Plutona) comes Black Hammer, a character-based superhero drama amazingly brought to life by Ormston (Lucifer, The Sandman) with colors by none other than Eisner Award–winning veteran Dave Stewart.

Once they were heroes, but the age of heroes has long since passed. Banished from existence by a multiversal crisis, the old champions of Spiral City—Abraham Slam, Golden Gail, Colonel Weird, Madame Dragonfly, and Barbalien—now lead simple lives in a timeless farming town. Even as they try to find their way home, trouble has a unique way of finding heroes wherever they are!

“Black Hammer has been a labor of love for me,” says Lemire. “It’s a project that I’ve been working on in various forms for seven years.”

With a variant cover by Lemire, Black Hammer #1 launches on July 20 and retails for $2.99. Preorder your copy today at your local comic book store.

“At once an epic, gripping superhero mystery, and a heartfelt meditation on why superheroes matter, Black Hammer is easily one of Lemire’s best creations. Peopled with fantastic characters like the haunting Colonel Weird and the mysterious Madame Dragonfly—each made wondrously vibrant by Ormston’s pen—Black Hammer is a place you too will find nearly impossible to leave.”—Scott Snyder (Wytches)

“On my pull list by the time I got to page five.”—Mark Waid (Kingdom Come)

“Jeff Lemire’s Black Hammer feels like it’s walking two roads—one honoring the past of superhero comics, and one forging a path into the future of the genre.”—Cullen Bunn (Harrow County)

“Black Hammer feels like a superhero story through an X-Files lens; it’s strange and melancholy and real. The tale evokes an immense world filled with typically deep Lemire-ian themes of isolation, joy and simplicity. I can’t wait to see where he goes from here.”—Charles Soule (Star Wars: Poe Dameron, Letter 44)

“Jeff Lemire, one of the most gifted writers currently working in comics, has produced another powerhouse work with Black Hammer. Combining the ‘country gothic’ feel of his own Essex County with the world of superheroes, the end result is something truly fresh, exciting and fun. I need more now!”—James Robinson (Airboy, Starman)