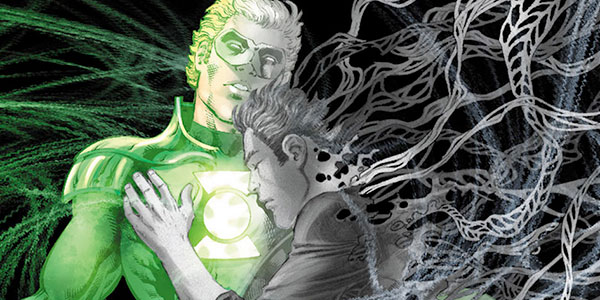 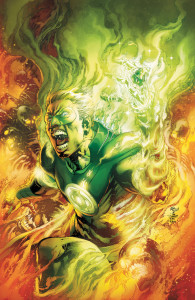 I have a problem.

I’m tired of seeing Lesbian, Gay, Bisexual and Transgender (LGBT) characters in film, television and print experience a disproportionate amount of tragedy and death in comparison to their heterosexual and cisgender counterparts. In fact, I’m exhausted by it. Queer Media Images: LGBT Perspectives (2013) makes a poignant declaration that “[i]n an era in which gay marriage may soon become legal throughout the United States, when films and television include more gay and lesbian characters, we find ourselves disappointed by portrayals in the first decade of the twenty-first century. Most mainstream films still promote a hegemonic, patriarchal, heterosexist sensibility.”

In addition, it is also noted that in instances where queer narratives are centered on death, such as in the film Beginners (2010), it “reinforces the all-too prevalent notion that being gay leads to tragedy.” I’m particularly disturbed by mainstream storytellers and audiences’ obsession with equating artistic merit in dramatic narrative with severe misfortune — to the extent that any possibility of a joyous resolution to a conflict is deemed unrealistic, talentless and ultimately worthless. It’s a pervasive problem in all media, but it seems to have an excruciatingly powerful vice grip on the collective consciousness of DC Comics’ New 52, which brings us to the issue of Green Lantern Alan Scott and the consequence of “gay death.” 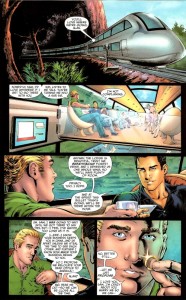 When DC Comics announced in 2012 that they would be recreating one of their most iconic characters as an openly gay individual, the usual media frenzy of homophobic responses erupted without delay. Everything from the “save our children from the dangerous of homosexuality” rhetoric harkening back to the days of Fredric Wertham and Seduction of the Innocent (1954) to grotesquely distorted critiques of affirmative action were all lobbied at DC Comics. However, it’s worth emphasizing that utilizing Alan Scott, one of several characters to carry the Green Lantern emblem — not to mention placing him outside of The New 52 primary continuity in Earth 2 as part of a group title — never could have jarred readers or broken barriers to the extent that Superman, Wonder Woman or Batman coming out of the closet would have. Nonetheless, as they had done with Batwoman before him, by reinventing Scott as gay while maintaining his historic association with a globally recognized brand such as the Green Lantern Corps, DC Comics gave LGBT representation an amplified platform through which to advocate for diversity. This is why it is especially troubling that his latest origin myth would be mired in tragedy.

In Earth 2, written by James Robinson, Alan Scott proposes to his boyfriend Sam while on a train ride. The train crashes. Alan Scott survives, his fiancé does not. What I find most disconcerting about this sequence of events isn’t the death of Sam itself, but rather the subsequent rational behind it. The supernatural (and sentient) flame which shields Scott from death, specifically tells him that he is the only one to survive because its only responsibility was to ensure his survival—no one else’s. In other words, “even though it was clearly within my capability to save your boyfriend (and everyone on the train for that matter), I didn’t because I wasn’t given precise instruction to. Anyways, time for you to save the planet, so off you go!” 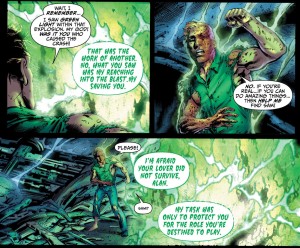 It’s a callous origin myth which ironically frames the proverbial Powers That Be as having little regard for the sanctity of life, or at the very least, as having more concern with the efficiency of protecting the masses (Scott’s designation as The Green Lantern and therefore guardian of the planet Earth) than that of the lives that are in imminent danger (Sam and the other casualties on board the train). Moreover, Scott’s origin myth is now forever associated with a tragedy tied directly to his sexual orientation and the subject of same-sex marriage, which is one of the most significant civil rights issues of our time. The most gut-wrenching aspect about this origin is the fact that what becomes Scott’s power ring is the engagement ring intended for Sam, eternally conflating his fiancé’s death with divine intervention and moral responsibility.

As stated above, narratives like this are not limited to any particular medium, but exist in all media where LGBT themes are concerned. Buffy the Vampire Slayer creator Joss Whedon came under fire in 2002 when Willow’s girlfriend Tara is murdered directly after a sexual encounter. According to Seven Seasons of Buffy: Science Fiction and Fantasy Authors Discuss Their Favorite Television Show (2013), the death of Tara embodied “The Dead/Evil Lesbian Cliché” otherwise known as “The Myth of the Dead Lesbian” which dictates “[t]hat all lesbians and, specifically lesbian couples, can never find happiness and always meet tragic ends. One of the most repeated scenarios is that one lesbian dies horribly and her lover goes crazy, killing others or herself.” This scenario also appears in the popular FX anthology series American Horror Story, where in season one (Murder House), a gay male couple is brutally murdered, and in season two (Asylum), one lesbian (Wendy) suffers a particularly gruesome death at the hands of the serial killer known as Bloody Face, who in turn rapes and impregnates her surviving girlfriend (Lana Winters). I’m a rabid fan of both series, and I found their productions as a whole to be exquisite, but the bombardment of gay/lesbian death left me nonetheless dismayed (especially since American Horror Story co-creator Ryan Murphy is openly gay and married, which leads me to believe even members of our own community internalize the idea we just can’t be happy).

Instances of queer death are endless, and as LGBT characters continue to gain prominence in mainstream American comic books, I fear it will become as overwhelming of an issue as Women in Refrigerators. Like many have stated in discussions concerning WiR, I am not suggesting violence or death be permanently off-limits to LGBT characters, only that publishers and creative teams make themselves aware of the potential consequence to fair and accurate representation and weigh their options accordingly. However, I will say this without hesitation: if your only recourse to convey drama is death, you’ve failed as a writer.

For many, reading comic books is a simple but cathartic escape from the harsh realities that LGBT readers (and especially those with suicidal tendencies) are forced to concern ourselves with in everyday life. Preventing College Student Suicide: New Directions for Student Services, Number 141 (2013) documents that “[d]espite advances in coverage of gay rights concerns in the media and the recent addition of more LGBT characters in media, there is still a stigma around being LGBT. This stigma allows society to continue to devalue and discredit being LGBT relative to being straight or heterosexual or cisgender.” As such, LGBT readers must have some semblance of reward for the stories we choose to invest ourselves in. This is not to say that stories with tragedy are without merit, but they cannot be the only stories being told. What we need are narratives that overcome stigma, that overcome tragedy, and ones which exemplify the joys, triumphs and ecstasy of the LGBT lived experience, because the overwhelming assumption is that these virtues simply do not exist.