Because of the significance it had on comics which would come after it, the simplicity/complexity of the nine-panel grid, and the genre up-ending plot, it is probably going to be impossible to say anything about Moore and Gibbon’s masterpiece that isn’t just in some other way repeating what has been said before. A person can only be told something is good in a limited number of ways before commentary becomes mere repetitive noise.

This is in no way to say that I don’t find it amusing (fun, even!) to gush about certain works, or to listen to friends gush about things in turn, but there are few “new” things to be gained from only commenting on how something is believed to be good, or great, or timeless. Perhaps, for you, Watchmen is one of those books, the kind of thing you understand to be of value, yet one which you’ve not found newer and more unique things being said about it. 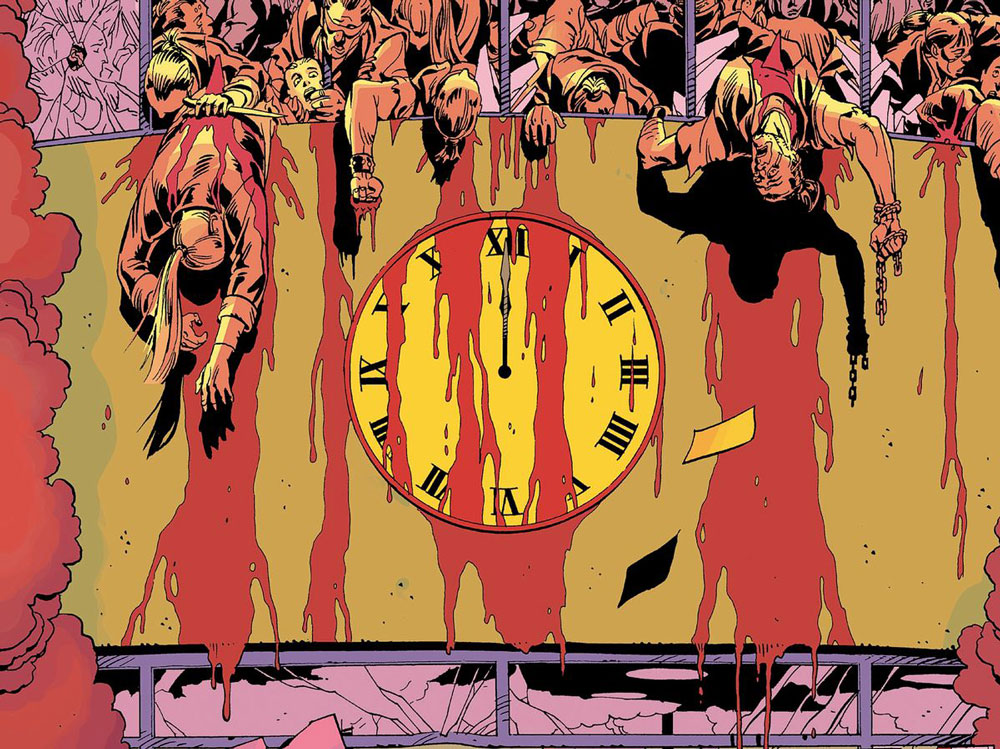 Having previously written on the fact that art is something important because it connects with people on a variety of levels, let me share with you how I find Watchmen personally relevant.

I remember having seen the famous Smiley Button design numerous times as a younger teen, and the book was not one I was unfamiliar with; however, I did not read it until I was in high school. My first experience with a comic as dense as Watchmen back then was handled with about as much care as you’d expect. What I mean is, I read the book far too quickly, I had no context for much of what informed the book’s creation and history, and I really did not have any knowledgeable source of comic information to turn to for unpacking the thoughts and ideas within.

Initially, back then then, I absorbed the basic surface elements of Watchmen, and even that was half-hearted. I was not the type of reader I am now, and much of my intake of the comic was speed reading. I probably only read two-thirds of the book and I certainly did not pay close attention.

I re-read Watchmen in the time around 2005-2006 while I was in film school. While I had developed my reading skills to be able to have more focus by this point, I’ll admit here that I was not fluent in actively seeking out or making connections in regards to art. I am, probably, weirdly, one of those people who enjoys the text in comics a little more than the art sometimes, especially if the art style in the work isn’t my thing, but I find the story engrossing. 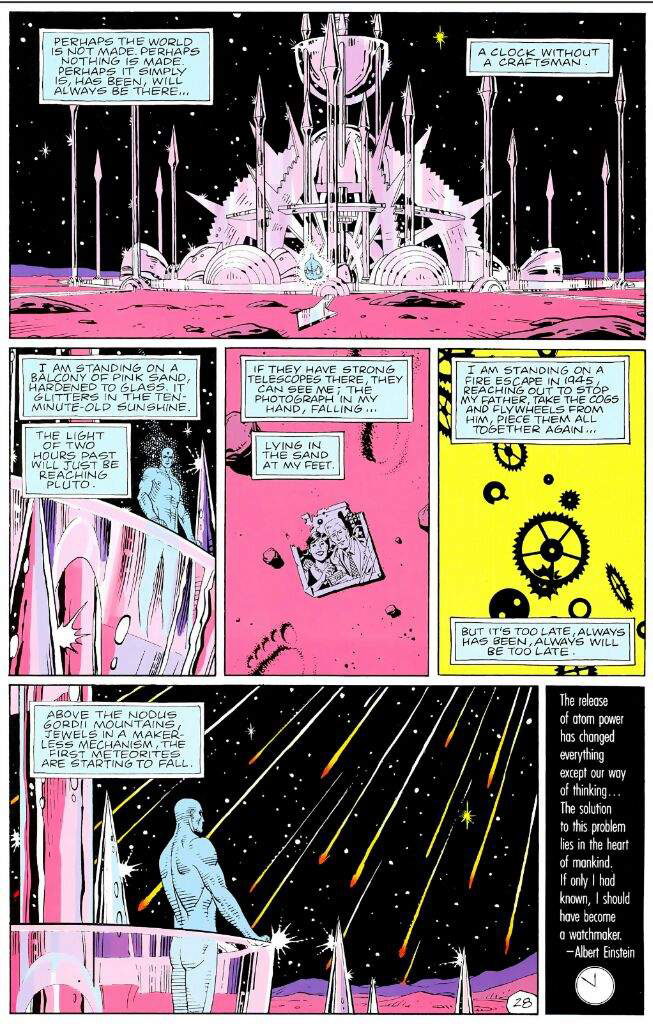 I was never the biggest fan of the Black Freighter sections of Watchmen, and I also still had no friends to speak with at length about Watchmen’s comic nature. I did have friends with whom I could, and did, talk about the film adaptation of the comic, but this was not the same thing at all. I was getting better at understanding Watchmen, as a narrative, but at this stage I don’t feel like I was really into what the comic was.

I have made periodic attempts to re-read Watchmen from cover to cover three times between 2011 and 2018, all of which, at the time I thought to have been beneficial. By this stage in my life I had the ability to draw meaningful conclusions from the text and the art, I had far more knowledge about the making of the comic (although, not as much as I do now as of 2019), and I was sure of the kinds of conclusions I wanted to see reflected in the text.

Moore and Gibbon’s critical assessment of human nature, morality and even love felt blatantly obvious to anyone who had eyes. Having said that, I’d like to share a thought I wish I had been considering back then that has been beneficial to my readings of Watchmen in the present.

“What does it take for a work to survive outside of the time period it was created for?” 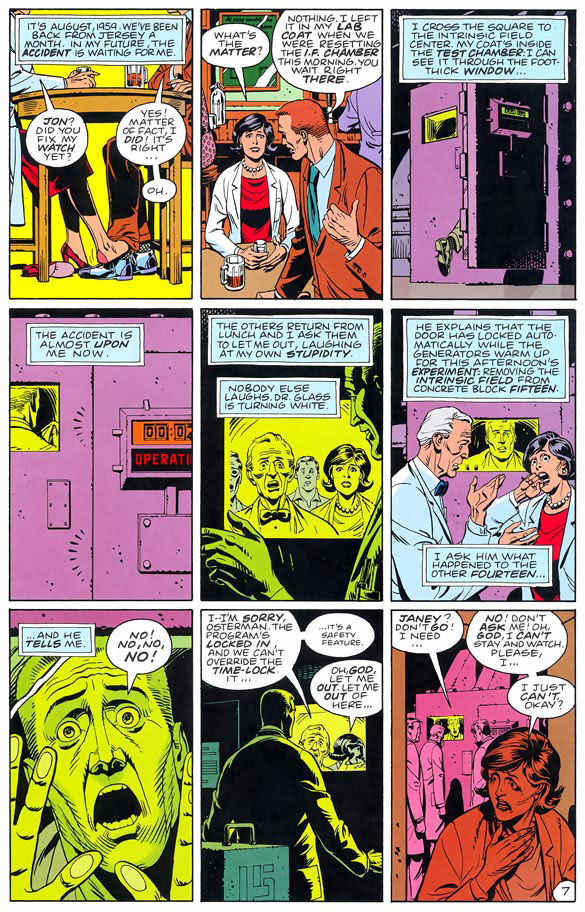 I find having conceived this question to be an impossible challenge to tackle because it not answerable only by myself alone, although I am certainly allowed to voice my limited attempts at answers.

First, for art to be classified as having survived, it needs to be said what its opposite state is. For art, the opposite of survival is destruction and/or having been forgotten. Watchmen is a rather famous work which has never been out of print since it’s publication. Since there is hardly any chance of all copies being destroyed, it stands to reason that there will always be Watchmen copies somewhere. If you decide to view once key component of survival as being remembered, then Watchmen has succeeded this regard since it’s enormously popular and has contributed to the increase in respect that comics, as a style of artistic communication, has accrued over the decades.

But, is this it? Make sure you have enough copies to go around and happen to be famous? I believe it would be fair to say the third category for defining how a successful comic outlasts its initial publication generation is that it must be something important that maintains its importance even after the tastes its initial reading audience have grown up, changed, moved on, etc… Does Watchmen? Yes, I believe it does, but …. Is there a fifth category for success?

The final criteria for a work being successful, which I argue that Watchmen does, is that it is a textual object unto itself that is complete, i.e. it has a definitive narrative, one that is evident regardless of the creator’s successes and/or failures which were part of the book when it was being made. Let me explain this in a little more detail and point out where this kind of thing manifests within Watchmen itself. 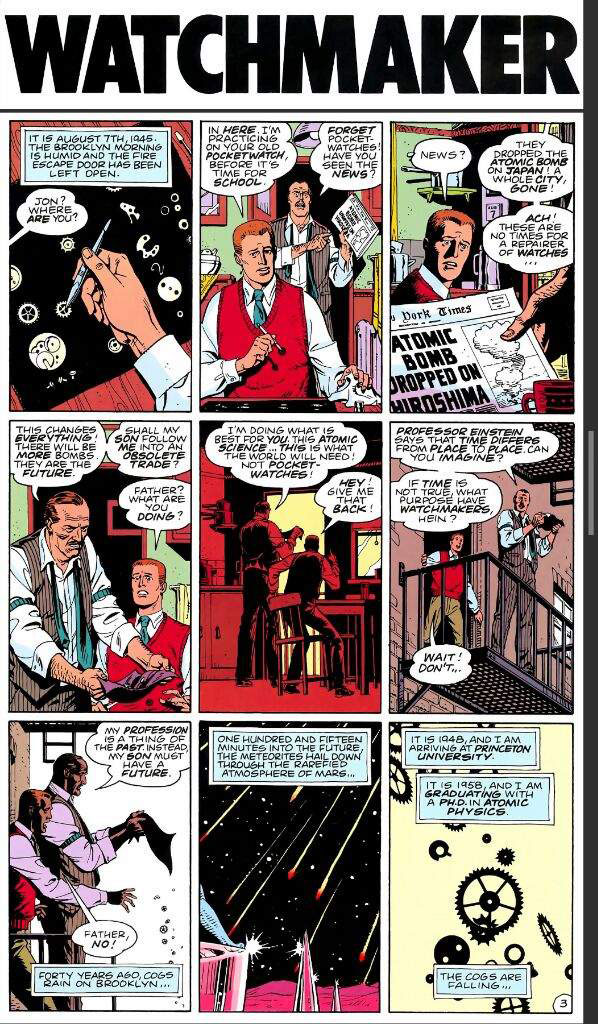 It is no secret that Watchmen is a comic around which clocks and rhythm are both key motifs. Gibbons and Moore both worked tirelessly to see to it that the comic followed a predictable, yet beautiful, series of movements from panel to panel. My previous comment about a comic being “a thing unto itself that is complete” means that, throughout the book, there is an implementation of design that rewards the reader for paying close attention because it was designed that way on purpose.

Recall the very start of Watchmen, when the panels draw back from the opening with the button to the balcony where Detective Bourquin is overlooking the city. These elements are tied together by the narration of Rorschach’s journal so that they exist together as part of a while, each one element being impossible to consider separately in as effective a manner. Just Rorschach’s journal text alone won’t “make” the sequence impactful, but you also can’t rest on just the art itself.

While it seems logical that a comic needs art and text together, Watchmen is a fantastic and timeless text because of how deep the narrative works with the art and the art in turn enhances the narrative words being depicted. There are books where the art, or the prose, is excellent, and one of those two things might very well be remembered more in the mind of the reader.

I’ll say right now that Kingdom Come is a comic I explicitly recall because of the art, yet I am at a loss to think of any prose segments I can recall from memory. Watchmen’s opening sequence is a testament to what makes the work meaningful; every element has worked out to help enhance and reward the reader every time the text is read, from the first time to the hundredth. 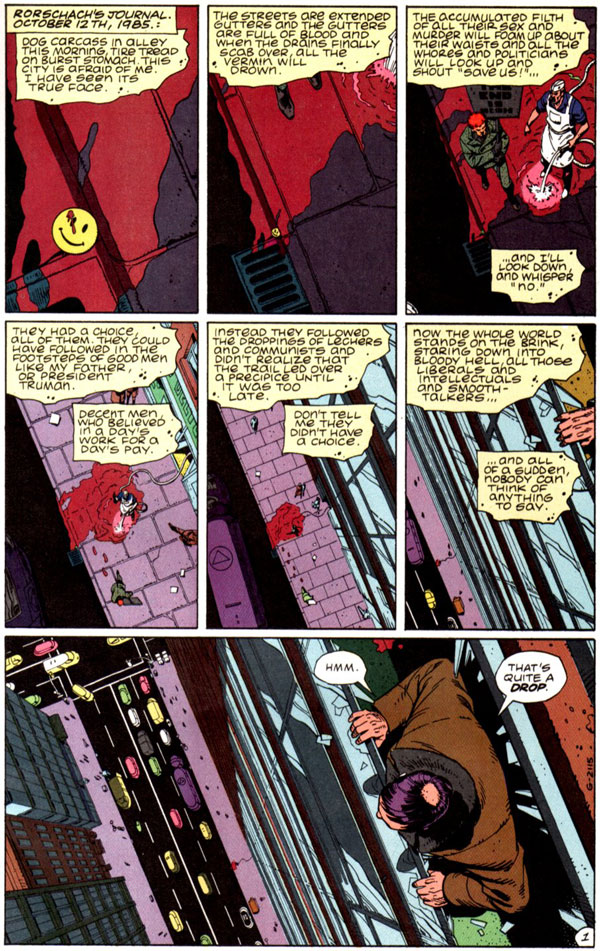 For example, I never caught that Rorschach is being flicked off by the man who is trying to hose down Blake’s blood on Page #1. I am fortunate to know this because the Annotated Edition of Watchmen is available. In truth, this edition of the text is invaluable for those who want to dig deeper into the text than the book itself allows. What I mean by this is that the notes produced and transcribed via annotator Leslie Klinger are insightful in regards to historical, artistic and cultural content of the story.

Watchmen is a book riddled with details so intricate and wonderful that it boggles my mind it was able to come into existence at all, what-with the backstory about how Moore and Gibbons were always having to revise and edit their initial concept into something more palatable to DC Comics and also having to adjust the scripts as they went.

But, remember, I mentioned earlier how for something to be a timeless success that the actions of the author, both those undertaken intentionally and via accident, are not to be the only barometer used. Moore and Gibbons clearly have artistic flaws in Watchmen, some small and some not. Regardless of any imperfections, Watchmen has remained valuable to audiences for decades, it is a comic that can be enjoyed without any “extra” layers of context than what the book itself provides.

NEXT TIME: A closer look at the intricacy of Watchmen‘s art and symbolism, as well as my own commentary on how I came to appreciate the labor of love put into even the smallest details by both Moore and Gibbons.