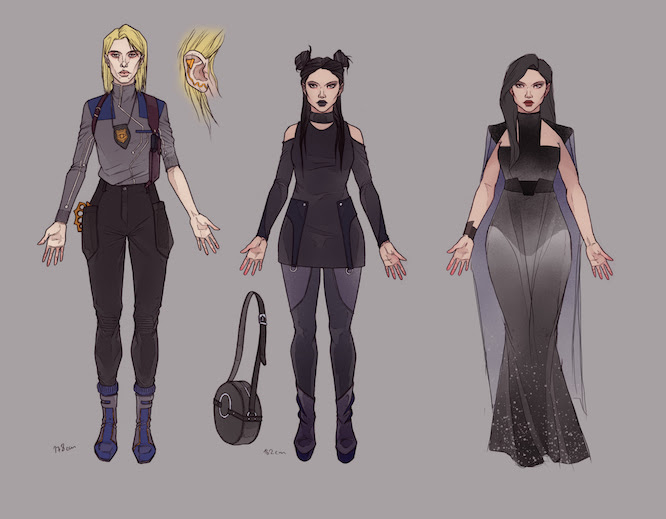 ST. LOUIS—Just before the opening of the exhibit hall at New York Comic Con 2018, Lion Forge is proud to announce r(ender);—a brand-new ten-issue series from writer Leah Williams, who has previously written for Marvel, BOOM! Studios, Dynamite Entertainment and more! This beautiful new series features artwork from Lenka Šimečková and will be told over the course of ten issues beginning in April.

r(ender); follows Emie Ocampo, a photographer who can capture the last images from the retina of the deceased. Emie teams up with Natalie Bixel, a skeptical detective, to unravel a slew of unsolved murders in a neo-noir landscape.

“I feel completely spoiled working with Jasmine Amiri and Lion Forge. That’s really the only way I know how to explain it,” says writer Leah Williams. “Jasmine is an editor whose work I had long admired from afar, and when she instantly clicked with the initial paragraph description, what began was an innervating collaboration that I’m still marveling at.”

“Leah Williams’s r(ender);is the type of story you only come across every so often as an editor, where you read the initial tagline and are instantly hooked. It hit the bull’s-eye for the type of high-quality original stories I’m hoping to bring to Lion Forge,” says Lion Forge Editor Jasmine Amiri. “The world is hypnotic, the leads are deeply engaging, and the dialogue is penetrating. r(ender);is a standout that could only come from the imagination of an immense talent.”

Leah continues, “Every step of this process has felt like I’m working with a partner-in-crime or a co-conspirator with Jasmine as my editor—locked step, in complete agreement, and Jasmine’s ideas get me hyped and give me new inspiration all over again because of how well she understands this universe. And now that Lenka Šimečková is working with us as the artist, I feel even more spoiled. And lucky. This easily feels like the most self-indulgent creative venture of my entire life and I honestly can’t believe it’s real or that any of this is happening. I’ve been subtweeting my own happiness about it for months.”

Jasmine follows, “With this level of detail and immersion, we needed to find an artist who was willing to dive in just as deep with us. We instantly knew we found her with Lenka Šimečková. Lenka took Leah’s descriptions of a world filled with dark-magic alleys and underwater passages and brought it to life before our eyes. I’m half convinced Lenka is a spell weaver herself.”

“I joke about r(ender); being ‘X-files, but lesbians and magic’ or ‘sea-punk tech noir,’ but really it’s a cyberpunk neo-noir story that takes place on the fraying edge between magic and technology,” Leah concludes. “r(ender);is the one story I’ve been desperately hungry to tell ever since I was a teenager. The main character’s unique magical prowess is literally a dream I had when I was fourteen, and just never stopped thinking about. r(ender); has been in my head for a profound amount of years. The fact that an editor as immensely skilled as Jasmine Amiri and an artist as exceptional as Lenka Šimečková can not only seethis fantastical world that used to only be my daydreams but are now creatingit with me—along with the powerfully sharp Lion Forge team—is a stunning thing to me.”

Amiri concludes, “r(ender);is mesmeric, it’s alluring, it’s going to dig its claws into you and suck you into a rich, twisted story where magic is real, and anyone can turn on anyone. I’m very much looking forward to readers joining us on this ride.”

New Delith is a steamy, thriving metropolis perched on a mountain jutting up from the middle of the ocean. Despite flourishing technology, the class divides are striking in this gritty, fantastical sea-punk city, and magic has long been the preferred method of gaining autonomy for those who cannot afford expensive tech. It’s here that Emie Ocampo can make the dead talk—she’s a photographer whose latest art series features photographs that she somehow developed from desiccated retinas of corpses, and are of the very last thing people saw before they died. r(ender);begins as Emie Ocampo gets arrested for magical fraud on the night of her first major art show, which was the biggest opportunity of her career.

Making the arrest is Detective Bixel, a straight-laced cop who’s built her career on prosecuting false claims of magic. But Bixel gives Emie a choice: help the N.D.P.D. solve a case using her “magic,” and the charges will be dropped. Bixel then explains that all around the city, people are falling into mysterious comas—they each sleep with an eerie, contented smile on their face while their body rejects all attempts to revive or sustain them, and soon enough, they just peacefully waste away.

Emie begrudgingly agrees to help Bixel solve this homicide case, and what begins as an uneasy but heated partnership between the two women soon evolves into something more as they grow closer, and together, uncover the shocking secrets of their respective worlds.

r(ender); debuts in April 2019 and will be solicited in Diamond’s February-dated PREVIEWS catalog. Look for more info on this gripping new series in the coming months!