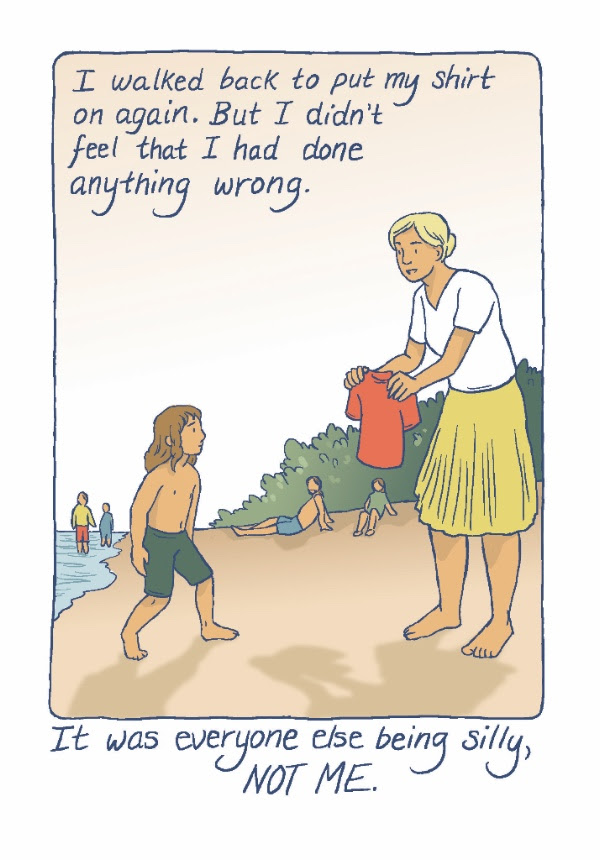 Maia Kobabe (who uses the pronouns e/em/eir) started Gender Queer Comicsas a way to explain to eir family what it means to be nonbinary and asexual. What e has created, however, is much more than just a personal story (though it is that), but a useful and touching guide to advocates, friends, and humans everywhere on genderqueer identity—what it means and how to think about it.

“I built the outline of this book by paging through fourteen years of high school and college journals and pulling out everything I felt like I could never say. I spent years confused by gender, feeling trapped between two poles, always longing for a third option” says Maia Kobabe. “When I finally came out as nonbinary to my family their response was “we love you, we support you, but we don’t really understand what you are talking about”. In many ways this book is an extended letter to them about how my experience of gender has always been nonbinary, long before I had words to explain it. I hope other nonbinary people read it and see a reflection of their own experiences. Almost more so, I hope that the communities around nonbinary people- co-workers, teachers, families, friends- read this book and are able to understand their loved ones better.”

“Maia’s touching and unflinching memoir is required reading for everyone who has ever discovered they are not quite the person everyone around them thinks they are, and for those of us who want to understand that experience,” says Andrea Colvin, editor in chief of Lion Forge. “Maia spares no detail in this deeply affecting account of eir search for eir true gender expression, even when that expression turns out to be something e had not realized was possible.”

Gender Queer: A Memoir is another important addition to the catalog of the publisher that promises “comics for everyone,” documenting Maia’s journey of self-discovery and burgeoning confidence to tell the world who e really is. The book offers a deeply personal but also universal account of coming to terms with what it truly means to be the person you were born to be. Gender Queer: A Memoir will release in May of 2019.

Maia Kobabeis a graduate of the first-ever class in the MFA in Comics program at California College of the Arts in San Francisco. Eir first full-length book, Gender Queer: A Memoir, is due out from Lion Forge Comics in 2019. E is also the illustrator of Tom O’Bedlam, a single issue which was accepted into the Society of Illustrator’s Comic and Cartoon Art Annual and nominated for an Ignatz Award in 2016. Maia’s short comics have been included in the anthologies Alphabet(2015), Tabula Idem(2017), Mine!(2018), Gothic Tales of Haunted Love(2018), The Secret Loves of Geeks(2018), and the forthcoming Advanced Death Savesand Faster Than Light Y’all. Before setting out to work freelance full-time, e worked for over ten years in libraries and now writes book reviews for Publisher’s Weekly. E has been self-publishing comics and zines since 2010 and has attended over fifty comic conventions in that time. Eir work is heavily influenced by fairy tales, homesickness, and the search for identity.

Maia Kobabe is represented by Emily Mitchell of the Wernick & Pratt Agency.