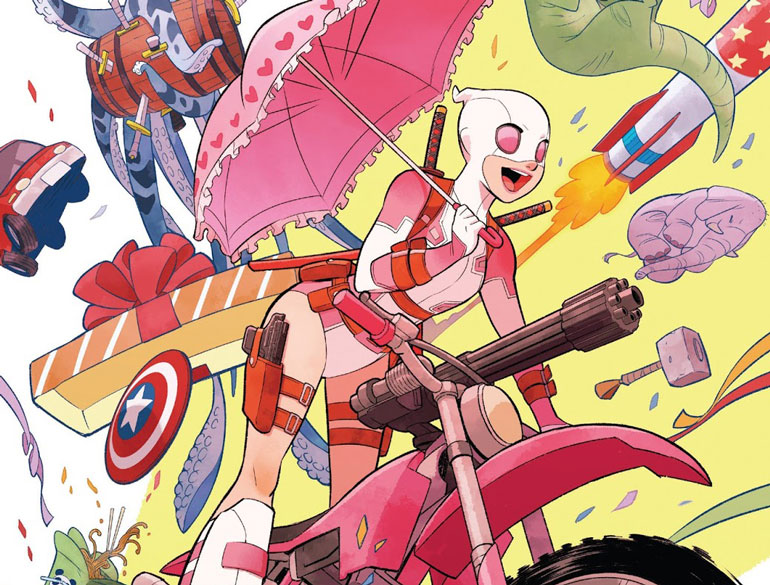 Last weekend, acclaimed comic book editor Heather Antos and other women employed by Marvel were brought into the spotlight on Twitter.

Not for their excellent work, but for getting a milkshake. They were out, enjoying a treat in honor of the recently deceased Fabulous Flo, a Marvel legend.

Absolutely nothing was wrong with this picture… except that it was full of women.

Some folks took an issue with that, citing Antos and her co-workers and friends as SJW (social justice warrior) trash, ruining comics, responsible for bringing down Marvel’s sales. All of this is, of course, ridiculous. But that does not make it less harmful, or less common. 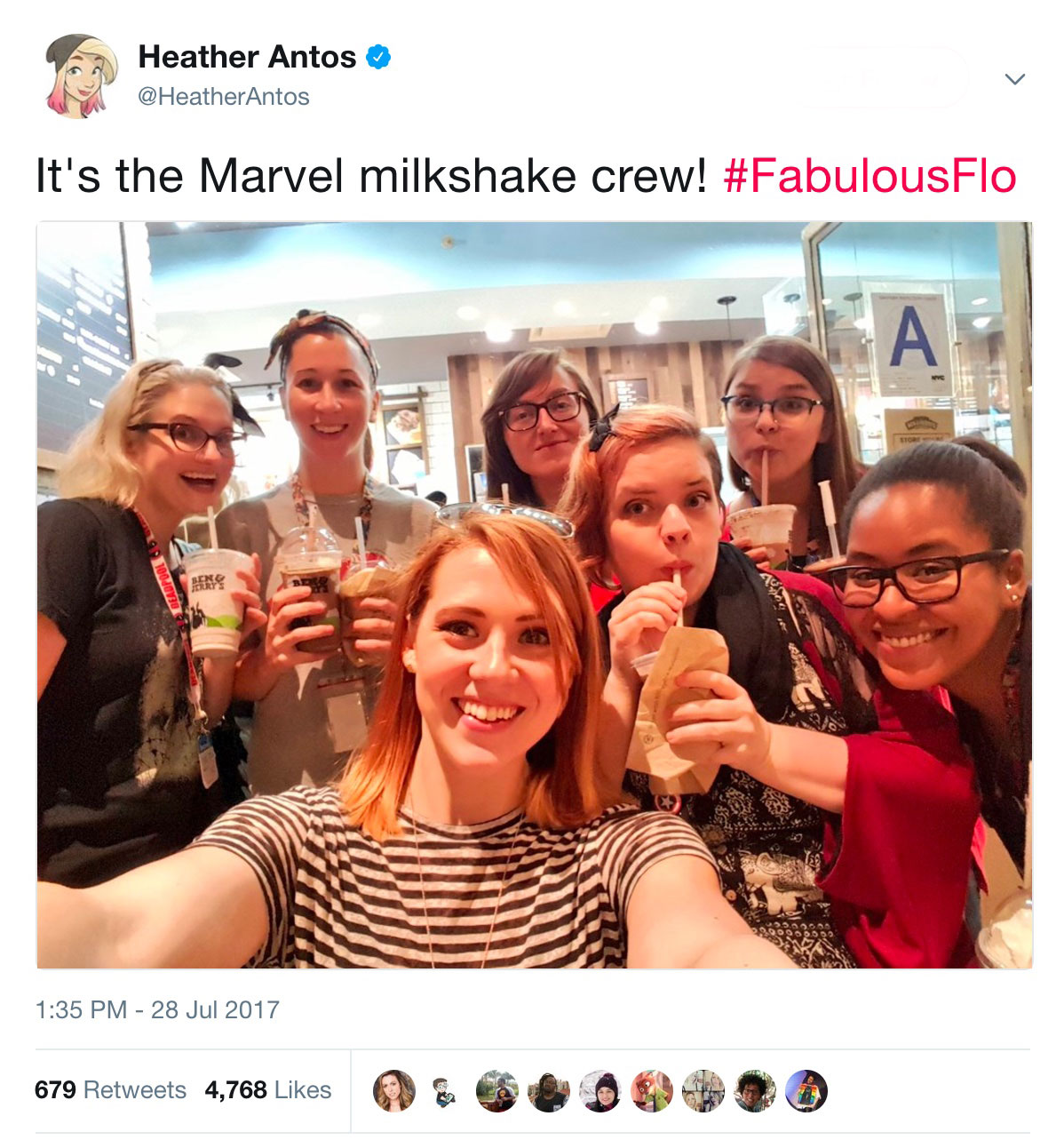 Women in comics immediately showed their support, and the hashtag #MakeMineMilkshake was born.

Since then, it has flourished all over the internet, and hit Twitter’s trending board, within hours. The show of support for these women in the industry was amazing and inspiring to fans and professionals alike. The minority of harassers who found themselves #MilkShook by the mere thought of friendly women working in comics and enjoying themselves were soon vastly outnumbered by messages of support and care.

Heather Antos, the women working at Marvel, women in comics, women in general… they all deserve our support. They deserve this rallying uproar when they are harassed. Harassment is WRONG.

However, when viral incidents like this bring certain issues into focus, it becomes clear that there are aspects of even the best-intentioned movements that can raise concerns and demand further discussion.

As the #MakeMineMilkshake hashtag spread, so did the realization that this is an easy way to show support and solidarity. In practice, it is a great idea — but the problems are in the patterns.

First, do white women get harassed? Yes, and it is wrong.

Do white women need support? Yes, and we should give it.

These assurances should be self-evident.

However, that this type of rallying response is primarily and historically reserved for white women in the comics industry (and otherwise) is something we need to interrogate and simply do better on.

We must take this opportunity to consider the marginalized creators who are being criticized every. single. day. just for existing in this industry and in the world.

Folks in the comics industry, fans, creators, professionals from all walks of life, stepped up to support this hashtag. They went out of their way to go buy a milkshake, take that milkshake to their local comic book shop, take a picture with their friends, and then tweet about it. This kind of support can spread like wildfire and draw attention to an issue, but it becomes performative if people only put in this effort when it is easy.

The fact is, it is overwhelmingly easier to defend, support, and stand with white women. Do not misunderstand this point: it is correct to lend a hand, but where is that same effort when things get hard? 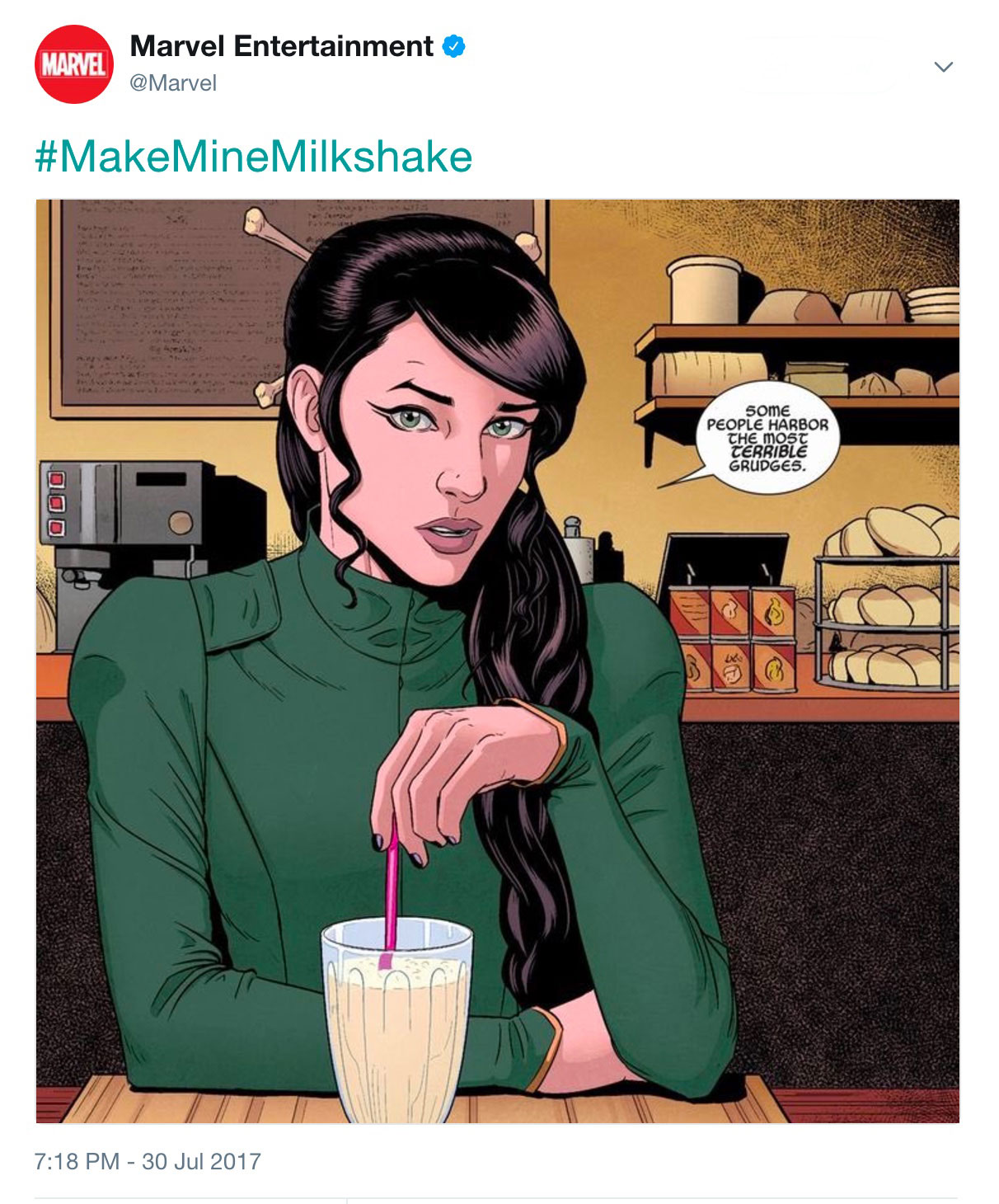 Do you find yourself tweeting cute milkshake selfies, but shying away from conversations on race in comics? Do you find it easier to follow a hashtag all your friends are tweeting, than step into a thread in which a woman of color is being harassed for voicing her opinion? Do you support women getting harassed by fans, but deride women of color for criticizing the race implications of a book like Strange Fruit? If you take a long, hard look at yourself and realize this is the case for you, personally, then address it.

People who supported #MakeMineMilkshake claim to support female creators, diverse voices, and progressive ideals in comics. If this is irrevocably true, where was the #MakeMineBlackandGay hashtag when Black Panther: World of Wakanda and Black Panther and the Crew were unceremoniously cancelled after being mishandled by the publisher?

Where is the #MakeMineTrans hashtag when trans women are harassed for working at Marvel — or anywhere, frankly?

Where was the #MakeMineCapAgain hashtag when Marvel decided to turn an American hero created by two Jews at the height of Hitler’s power into a literal Nazi in the wake of a political surge of white power? Where was it when Jewish and queer critics were getting harassed for their measured response?

If you took a milkshake selfie, step up and stand up for creators of color, queer creators, disabled creators — stand up for all the marginalized folks in comics who are told every day that they should not be here, that they do not belong. Give them a hashtag, give them an article, give them your support. Don’t be a fair-weather ally.

Comics are for everyone, and we should fight for that. 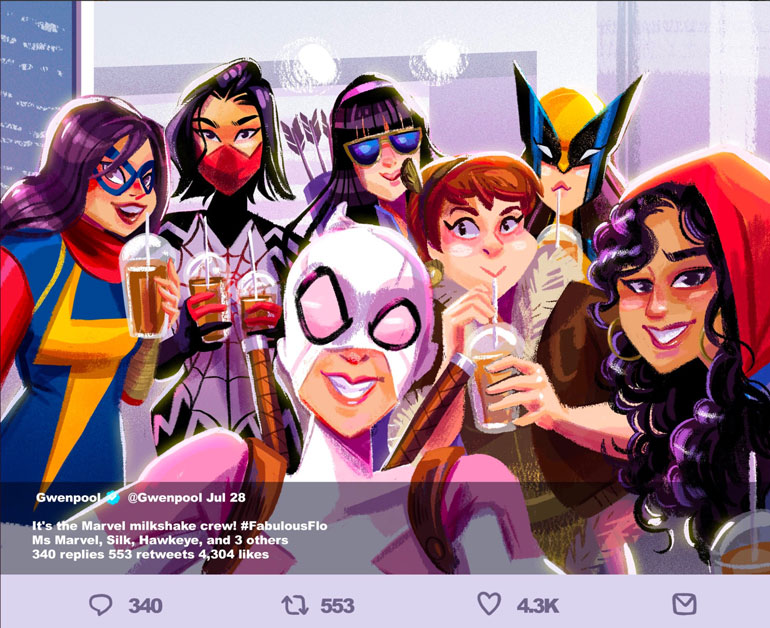 Of course, there are people who should not have been drinking milkshakes at all.

Tweeting out a hashtag in support is easy. A hashtag is an easy thing to hide behind. One tweet and you’re good to go, right? You love women, you support women, women are great. It’s fantastic cover to point to later on if you don’t tend to practice what you preach. You might think we don’t see you, but we see you.

We see the creators that post milkshake selfies and then ignore fellow creators who are being harassed. We see you #MakeMineMilkshake and then turn around and continue to belittle and ignore female coworkers and creators. We see you sipping whipped cream off the bottom of your glass while you knowingly work alongside named sexual predators in your office. We. See. You.

Hiding behind a hashtag, or a T-Shirt, or a pink hat is easy to do. It makes you feel good. Especially if you have been explicitly known to harass women, be an ignorant jerk to fellow creators, or fail in every other capacity to stand up against marginalized groups being harassed in the comics industry. Showing a little bit of no-strings-or-responsibility-attached support can feel really nice.

Ultimately, this false demonstration of support is not fooling anyone. If your behavior does not match your words, people notice. People remember. Performative allyship means nothing without the track record and the effort to back it up.

Don’t rely on activism that takes one tweet or one minute of your time. It might make you feel better, but you are the only one fooled into thinking you are making a difference if you live all the other minutes of your life ignoring or staying silent about the same harassment that’s right on front of you, particularly among your creative peers.

Relying on simple, performative allyship and activism is not a clear path to radical or positive change. It helps in the moment, but if you want to be in it for the long run, make a change.

Respect women. Respect women of color. Respect people. Show your support. Use your power for good. Use your voice to lift other voices. Use your words to defend the opinions and lives of others.

Put your milkshake down, stand up, and make a change.

I’ll say it one more time: there is nothing bad about #MakeMineMilkshake. Harassment is wrong, standing up against harassment is right. These are facts.

However, any situation is an opportunity to observe patterns, educate ourselves, and become better allies. Next time you see a person being spoken down to, kept out of a job, harassed for being Black, or gay, or queer, or AAPI, or female, or Muslim, or Latinx, or feminist — give them a hand. Give them support. Hey, maybe start a hashtag. But back it up.

Be better. Be good.

This is comics — we should aspire to be heroes, not just put them to paper.